Wally’s WHY200 wowed at Cannes. Ocean talked to Wally founder and designer Luca Bassani to delve into the WHY’s whys and wherefores.

“The target,” says Luca Bassani, “was to conceive a semi-displacement boat which could be better than any other competitor. Easy to say, but not so easy to achieve.” We are sitting on the upper aft deck of Wally’s WHY200 and I am about to get a first-hand account of what makes this boat tick – and why WHY is such an intriguing project.

It was hard to miss the Wally WHY200 on the Superyacht Extension quay at the Cannes Yachting Festival. It wasn’t so much that the Wally was the first in the line of stern-to yachts, but more that its combination of striking style lines and towering bow were just, well, unmissable.

The prodigious space encapsulated in the extraordinary design is hinted at in the model’s name – the 200 refers to an interior volume of 200 gross tons, which is a significant amount for a yacht that falls below the 24-metre regulatory boundary.

The WHY part stands for Wally Hybrid Yacht, but this doesn’t refer to hybrid propulsion – rather, it references the different design of the hull which represents a somewhat different concept. It’s the brainchild of Bassani – Wally’s iconic founder, and designer of Wally’s iconic models including its ground-breaking avant garde sailing yachts and the mighty, stealth-like WallyPower 118, among others. 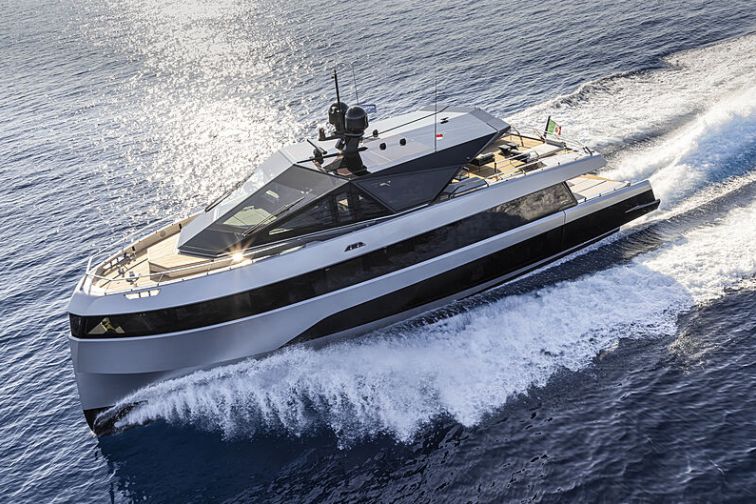 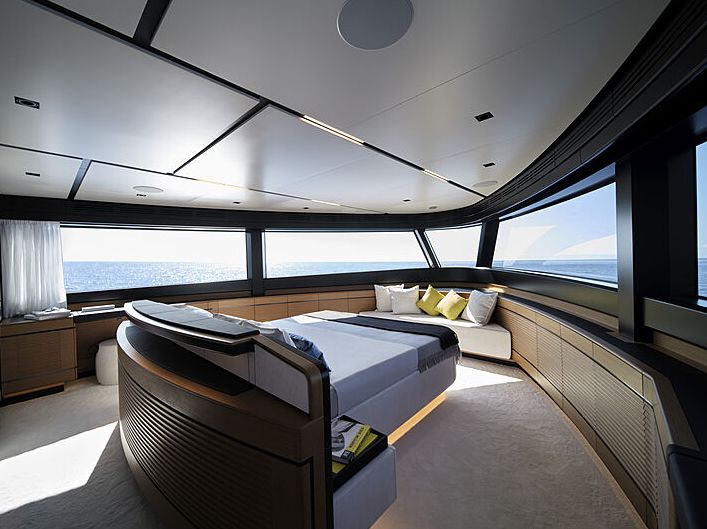 The WHY200's 'wow bow' houses a master suite with an extraordinary view through wraparound stem windows. Imagery supplied by: Wally 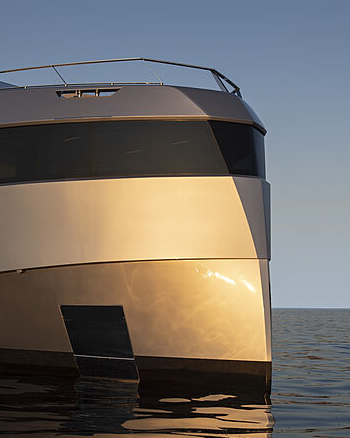 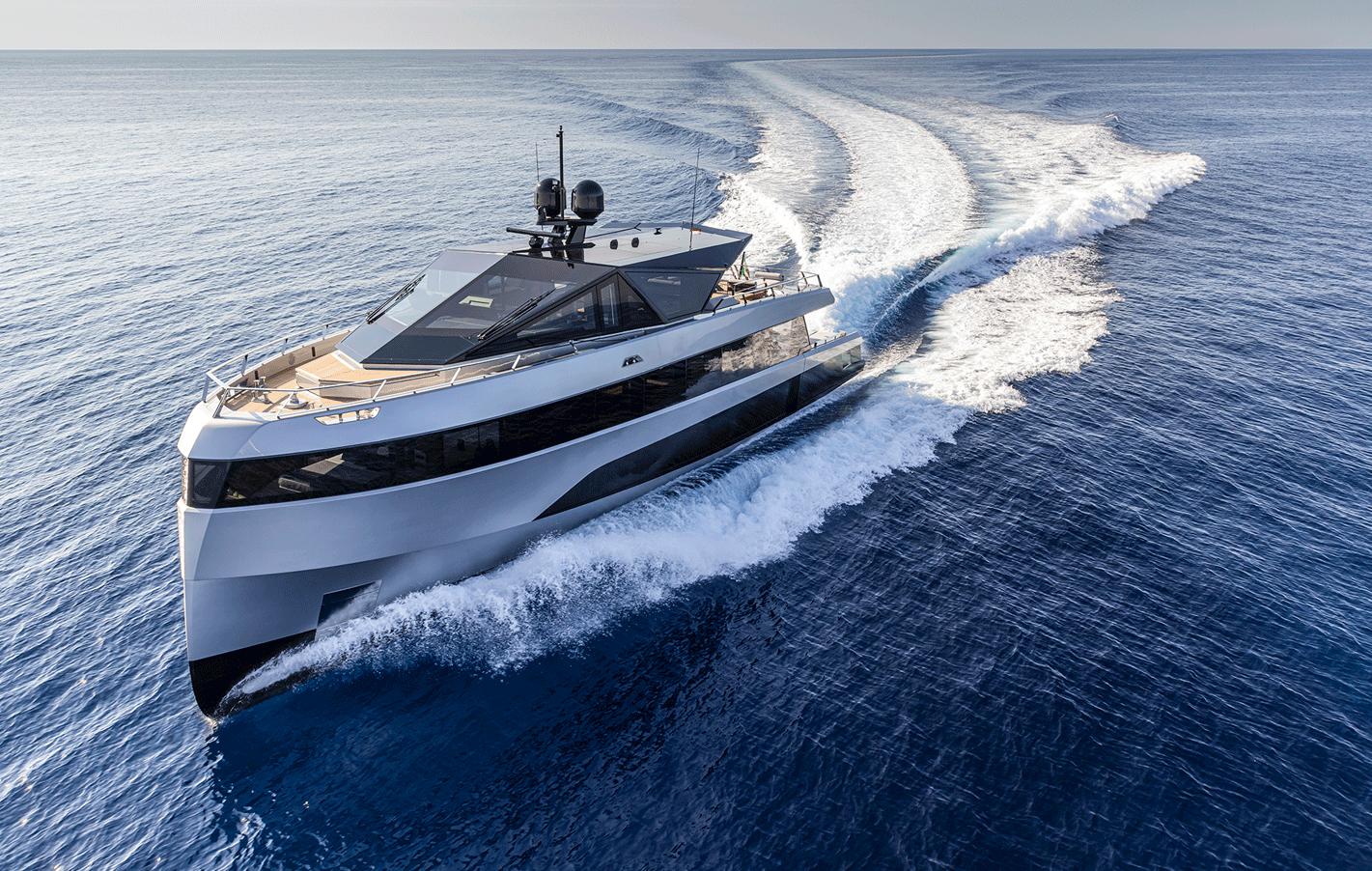 “We started thinking about the WHY200 when the management of Ferretti [the Group acquired Wally at the start of 2019] told us they wanted to enter the semi-displacement niche, which was growing quite quickly,” Bassani explains. “They wanted to be there, and to be the best. As usual, we started with the hull because we think that’s the most important component of a yacht as it has to be good in any sea condition – and it was a difficult challenge to have a semi-displacement yacht that could be very seaworthy in bad weather, and comfortable, and at the same time very efficient.”

It was at this point that Bassani and the design team decided a high bow would also be a good design element, not least because when the hull was capable of pushing through the seas at 18 to 20 knots rather than 10 to 12 knots, it was important to have a bow that would stay out of the water and not simply pierce the waves.

“So we designed this very high bow that created a new volume under the foredeck,” Bassani continues, “and having that new volume you say ‘Wow – how could we explore this new volume?’. So the idea was why not try having the master cabin there.”

Usually the bow is subjected to excess vertical accelerations as it pitches in a seaway, but the WHY hull design had mitigated this effect which meant that comfort wouldn’t be an issue. With this location came additional benefits – the distance from the engine room, for example, which means the master suite is completely isolated from engine and generator noise and vibration.

Then, of course, there was the opportunity to do something further – put in a horizontal window that effectively wraps around the stem. “Having a view of the sea is one of the reasons to be on a boat,” Bassani enthuses. “We found it was possible to do that, and the master cabin became the pearl of the whole project.” 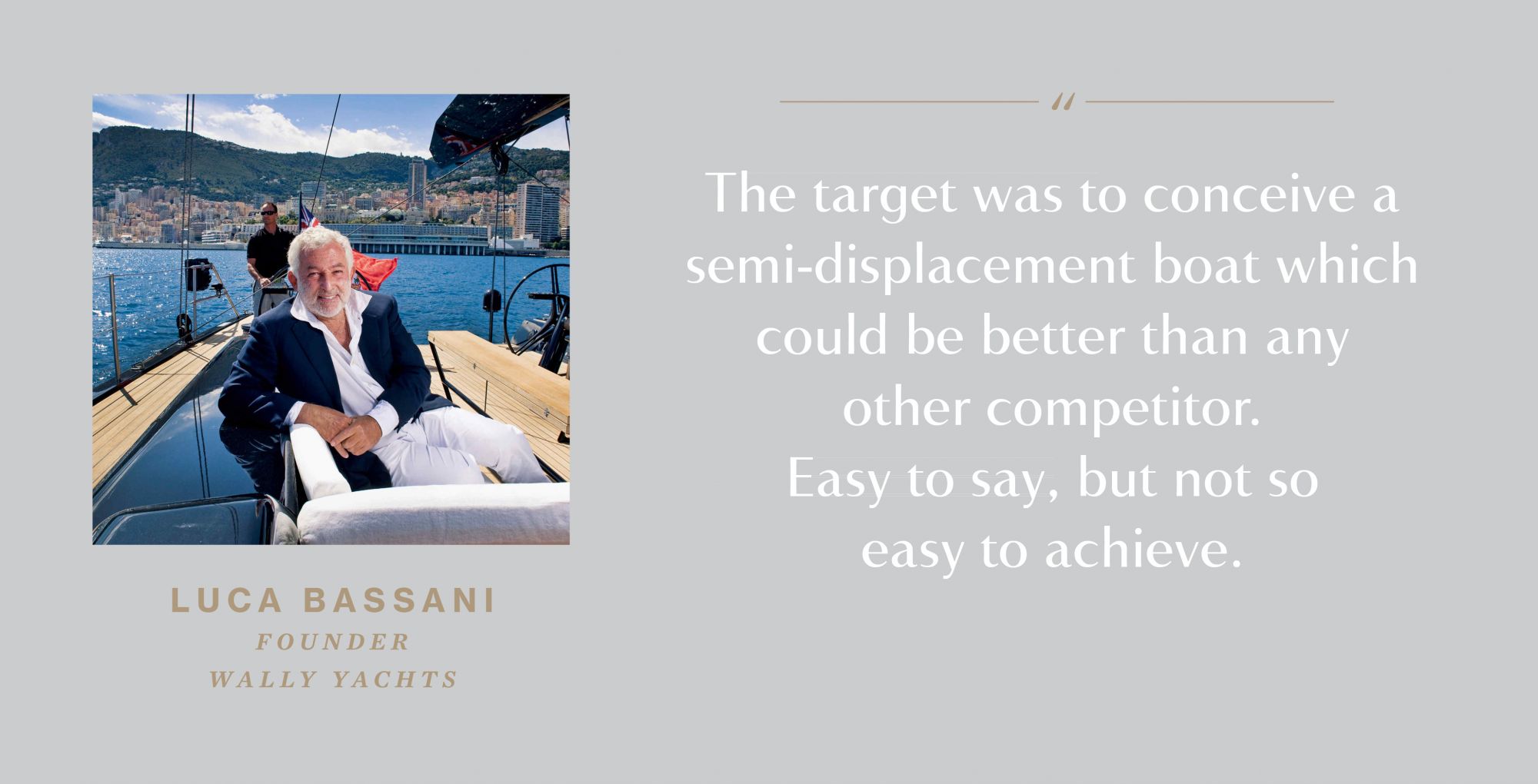 The team didn’t stop there, though. They opted for a widebody design, which removes sidedecks and creates vast interior spaces for the size of vessel, and also ensured that the cockpit areas were equally large. The effect is further enhanced by large windows. “With all the glazing we have,” Bassani offers, “you have the infinity feeling, the fact that [the spaces] look bigger than reality. So this was the project we presented, and the Ferretti Group management was brave enough to accept the concept.”

Construction on this first WHY200 started 18 months ago, but the project has been running for three years. And although Bassani can’t provide specifics, he says that the WHY concept will evolve “in all directions”. For now, though, the WHY200 is doing a neat trick, creating the impression of a much larger yacht.

“The size is 24 metres for the register, 27 metres overall – but in reality the hull is 24 metres,” Bassani states.

It also means the boat will appeal to a broad potential market. “I think,” Bassani continues, “we can attract a lot of different people. Younger clients could have huge parties and a lot of friends on board, but also middle age clients with children and grandchildren will enjoy the space. And more senior clients will get a lot of comfort. In the end volume becomes comfort, and because the boat is not noisy at all plus you have 22 metres between the engine room and the master cabin, with a lot of bulkheads and insulation. It will also appeal to people coming from fast powerboats and for owners coming from displacement yachts.” 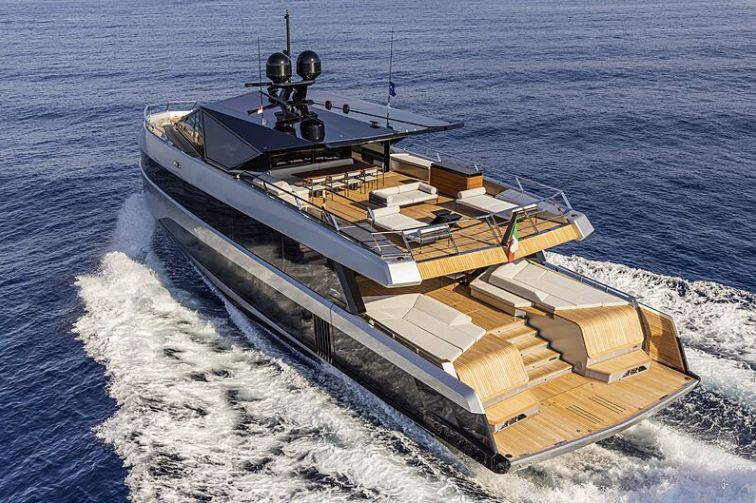 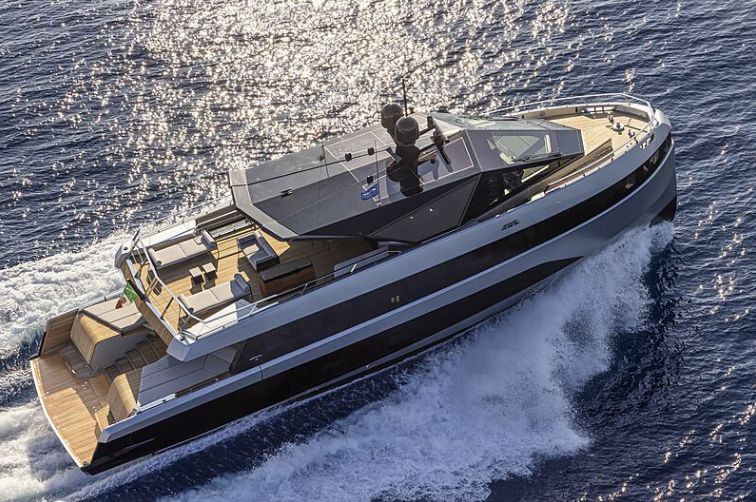 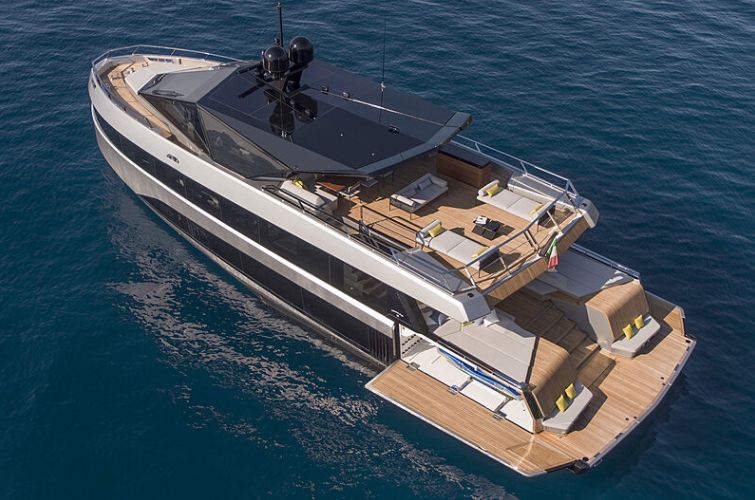 The WHY200's beach club benefits from droop-down bulwarks to extend the terrace on the sea. Imagery supplied by: Wally

The design elements of the WHY200 extend beyond just the hull form (which features naval architecture by Laurent Giles) and that five-metre-high bow. The 7.66 metre beam creates a prodigious main deck saloon that can be configured in a number of ways, including an aft port show galley, dining areas, or additional lounges. Moreover, an ‘entertaining’ layout option includes repurposing the forward master as a dining room with a view.

Aft and centre in the saloon is a glass and structural carbon staircase, the column of which runs down to the three or four guest cabins on the lower deck, and up to the upper deck, which again features a prodigious outside area, and inside skylounge or dining area under the trademark stealth fighter glass superstructure, with seating or a dining area under the overhang.

There is a beach club, and garaging for a tender and toys. The crew accommodation for five is located aft of the guest suites on the lower deck and forward of the engine room, which houses four Volve Penta IPS drives in two power options. These deliver max speeds of 21 or 23 knots, with cruising around the 18-20 knot mark. Running two of the drives gives a cruise of around 11 knots.

There are currently six WHY200s in build, and I am told that hull number six will be headed to Asia, meaning you may be able to get a close a look at this innovative sub-24 metre semi-displacement cruiser closer than you think – and it really does warrant a closer look.