Dominator toasted its 20 year anniversary with the revelation of its flagship 42-metre Ilumen, called Peppermint.

Three years after the first press conference about the Dominator Ilumen 28M, which was held during the traditional Friday evening cocktail event at the Cannes Yachting Festival, Dominator Yachts announced the new 42-metre Ilumen, currently under construction for a German client.

The first hull will be another significant advance for the marque. Peppermint will have its debut at the Cannes boat show three years from now, in 2022.

Again, the most innovative design and the most modern processing techniques have been used to achieve the best solution in all of the technical assets, as it was done for the ‘small’ sistership Ilumen 28M.

The Ilumen 42M Tri-Deck is a revolutionary yacht, where space and light are the key features and she will be completely different from anything currently offered on the market.

The engineering design started with a full analysis of weights, optimised with enhanced prediction methods and a massive use of FEM analysis in order to ensure the correct strength and safety feeling onboard. 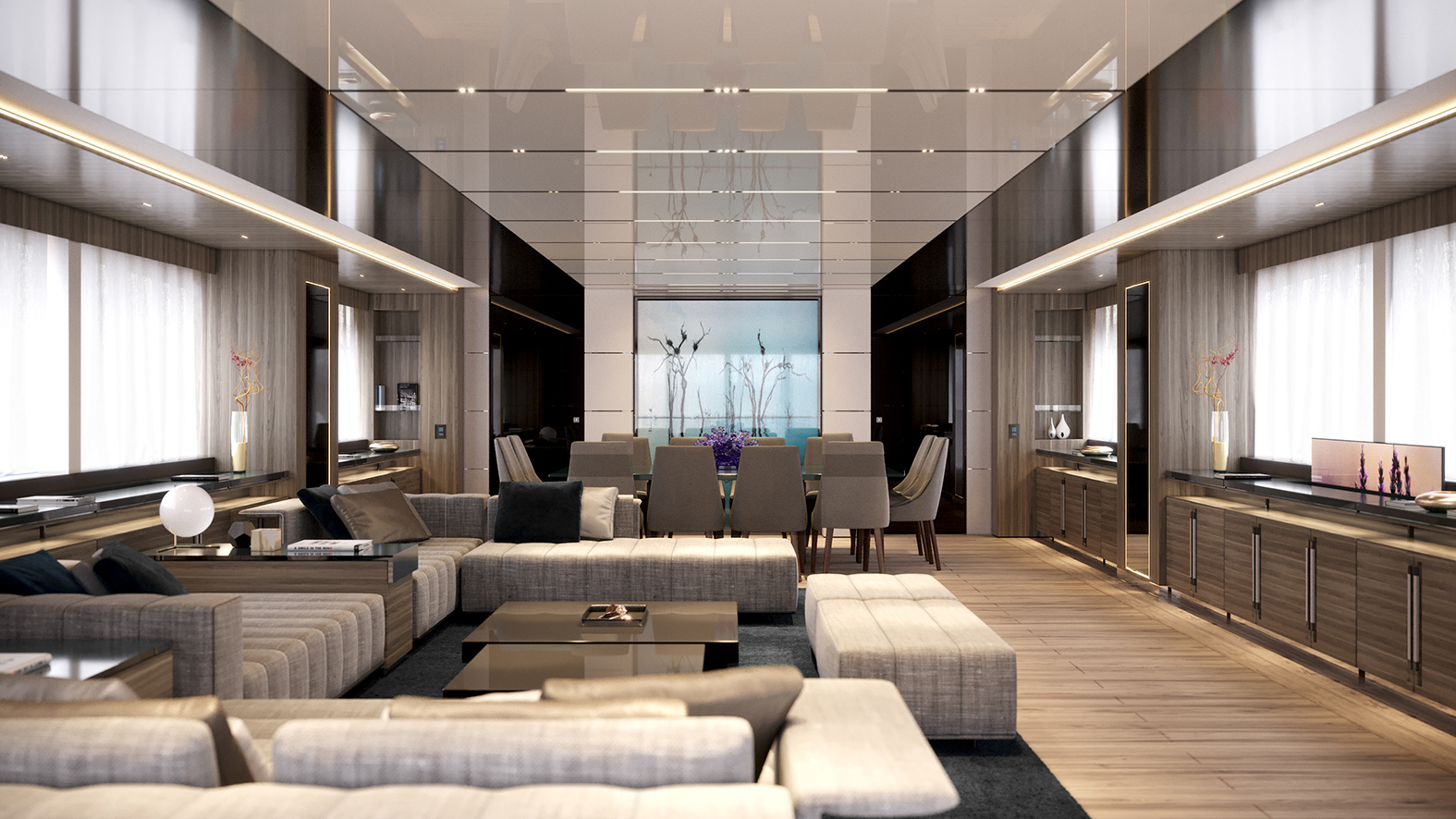 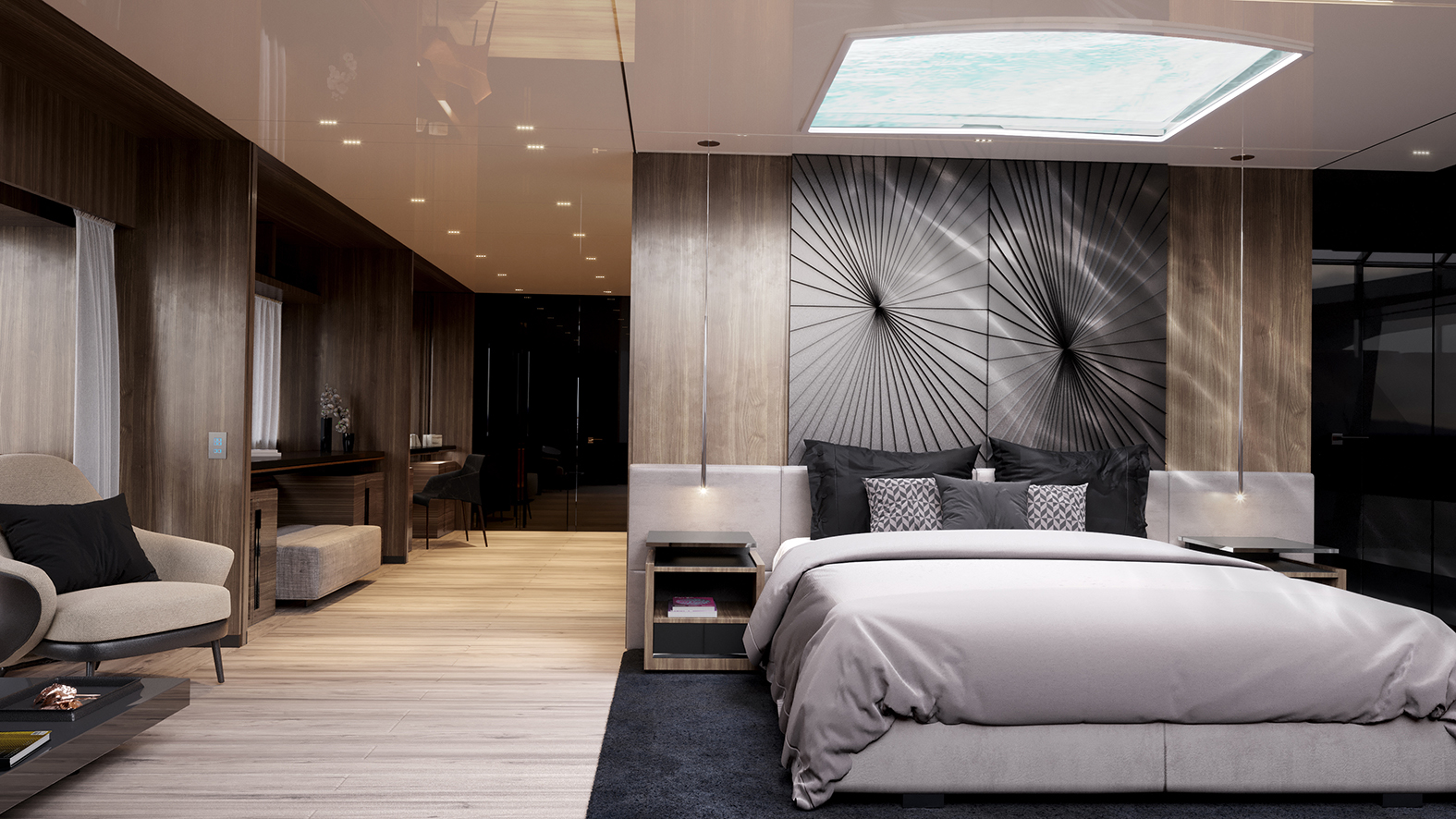 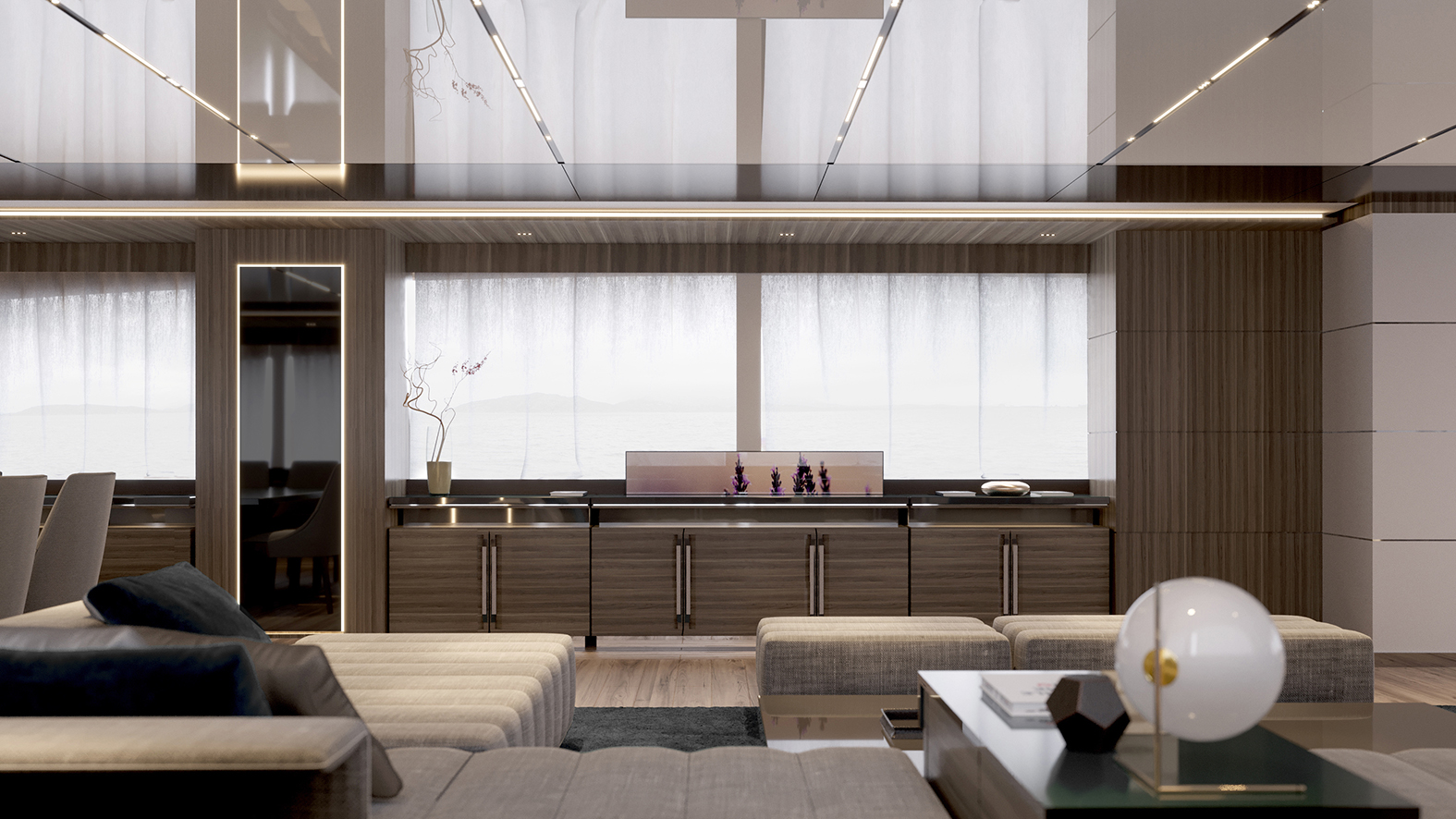 The outcome of this is a highly advanced structural layout, with an extensive use of carbon fiber, sandwich and vacuum infusion technology.

The hydrodynamics studies had been performed with an intensive and combined use of CFD simulation and mathematical algorithm. The outcome of this approach is a deep and full comprehension of hull behavior both in still and in rough sea.

The wake has been controlled and optimised in order to reduce the power and, therefore, the fuel consumption. The HPH (High Performance Hull) of the Ilumen 42M Tri-Deck is a particularly hard-chine hull with a blade bulbous bow designed to have great resistance values for all the semi-displacement and semi-planing phases.

Excellent performances have been achieved in seakeeping, trim angle at all speeds and ship motions of roll and pitch in order to ensure a high level of safety and comfort on board, considering also an approach with oceanic head-waves over 8 metres height. The 42M Tri-Deck will be the only yacht in this size to perform an oceanic transfer due to its extraordinary range of up to 4500nm in the semi-displacement with 19.5 knots of maximum speed.

More strength and safety as compared to a metal yacht or a classic monolithic composite yacht as well as bigger volumes and more square meters for interiors are key features of the Dominator Ilumen line that have been proven to be successful in the smaller sizes, so the space perception on the 42-metre Tri-Deck will be simply outstanding.

“We’ve built our brand around quality, attention to detail and giving our clients the yacht of their dreams,” says Angela Pernsteiner, CEO of Dominator Yachts. “Now, we’ll move into a new category with a 42-metre yacht that is unique to the market.”

The new Ilumen 42 promises to be a category-buster in multiple ways. It’s the first sleek and sexy yacht of its size with the range to cross the Atlantic; and it will be offered in semi-displacement and displacement hulls, with each one being built around the personality and tastes of its owners.

Peppermint will be a semi-displacement hull and promises to be a legitimate breakthrough in the 42-metre class. The German owner loves to travel the world as a free spirit, and his wanderlust has been stamped into every inch of this four-deck yacht.

“Beyond its ability to do transatlantic crossings, Peppermint will be the only one in its class with a Touch-and-go helipad option on the bow—usually reserved for bigger megayachts,” says Pernsteiner. “We see the boat as a serious mini-explorer. And the owner will explore the world on her.” 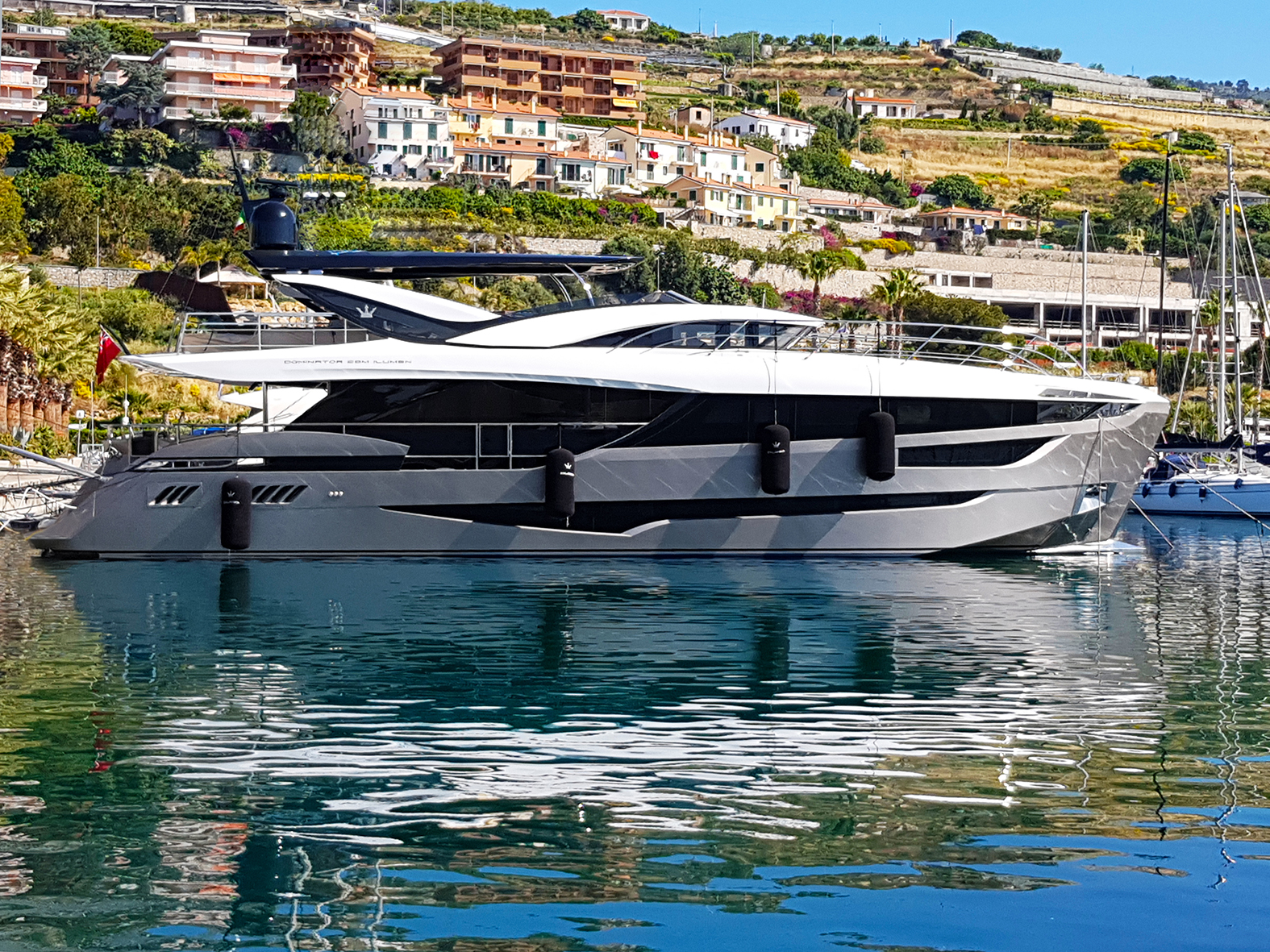 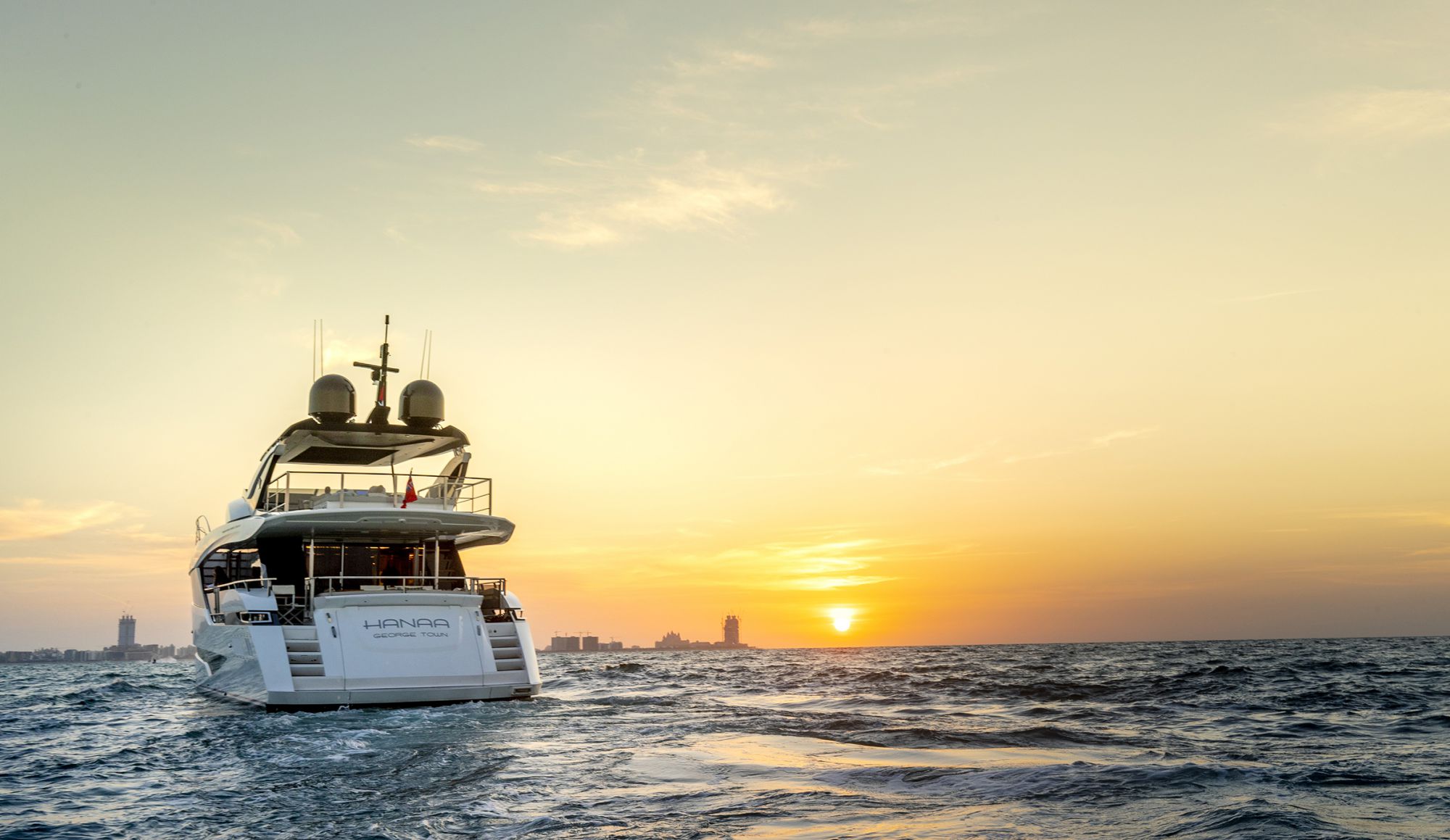 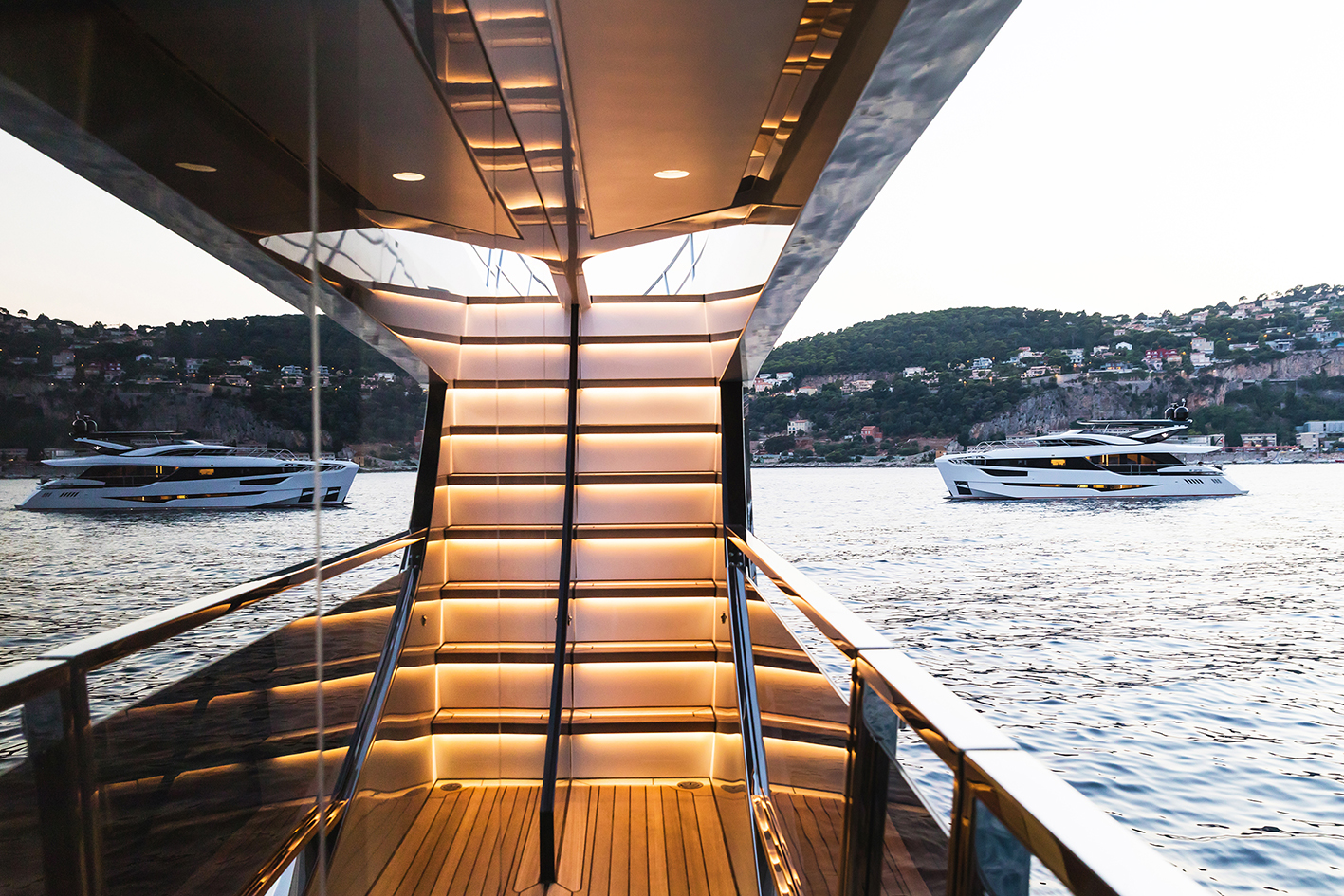 The Ilumen yachts are characterised by the use of glass.

With her 40.4-metre length at waterline and 8.8-metre beam, the new Ilumen Tri-Deck has serious internal volume for the design team to work with. The owner made use of the vast interior space, and the designers’ talents, by creating wildly different geographical themes on each deck.

“He wanted each area to represent different countries and continents,” says Pernsteiner.

“For instance, the flybridge has a Middle Eastern theme, with subdued colors, a relaxing ambience and even a hookah lounge—as well as a traditional bar. Imagine a soothing café in Marrakech, and you get the idea and feel the vibe.”

By contrast, the Manhattan-themed owner’s area is vast, encompassing about one-third of the main deck. Large glass walls and windows, contemporary décor and an office—the owner plans to spend long periods aboard the yacht and has equipped it with a teleconference screen, printers, scanners and the like—resemble a modern, loft-style penthouse in the heart of New York City.

The owner’s stateroom has a private deck in front, with easy access to the Jacuzzi on the level above. And the retractable moonroof in the master suite will allow for sleeping under the stars.

The decks are designed and equipped so the owner will have everything he needs for every mood and every area of life: business meetings, lifestyle and detox zones, areas for both social encounters and lonely philosophical times.

The upper deck is dedicated to a lifestyle and detox area. It has an Asian feel—similar to that of India or Thailand, complete with a yoga studio, workout room, smoothie bar and expansive windows for endless views of the ocean.

Having a health and wellness area take up so much real estate on a 42-meter yacht is unusual but shows how important it is for the owner to make Peppermint his dream home and keep to a variety of beneficial routines: gym, jacuzzi, spa.

The aft cockpit, main salon and galley were designed in a European motif, showcasing contemporary art from Milan and featuring large open spaces, an elegant fit and finish, and a seamless transition between the interior and exterior. The large, 12-seat dining table can be used as a conference table for business meetings, thanks to a painting on the wall that folds up and reveals a screen (with a projector that drops down from the ceiling).

The beach club at the stern has a laid-back Australian theme, with a sizable interior and direct access to the large swim platform, not to mention a live botanical wall. It promises to be one of the most popular hangout spots on the new Dominator.

Forward of the beach club and engine room are four lower-deck guest suites that will all be named after countries in the Americas, while just forward of that, the crew quarters will have an Antarctic theme.

Dominator presented a film that shows the new Ilumen crossing the Atlantic for New York harbor. That is not a stretch considering the owner plans to live aboard for much of the time. “The beauty of this size is that the owner can be directly involved in the operation of the vessel,” says Pernsteiner.

“It’s much more accessible than a 60- or 70-metre yacht,” but will give you the same possibilities in terms of traveling in style and comfort and quenching the thirst for adventure.”

Commissioned by an owner who loves to travel and seek out new experiences, it makes sense that this owner would also want to share this vessel that is built to explore. With that in mind, Peppermint was built with enough range to cross the Atlantic, which is unique for this size and style of yacht.