Given he’s both a scion of one of Melbourne’s most prominent families and the co-founder of one of Australia’s most successful tech start-ups, remarkably little is known about Matt Rockman. In a rare interview, he sat down with us to share his thoughts superyachts and going from shirtsleeves to shirtsleeves in three generations.

Matt Rockman’s love of boating had a somewhat tangential beginning, because his father – Irvin ‘Rocky’ Rockman – actually wanted to get his son hooked on scuba diving. Irvin – son of Norman Rockman, who founded the eponymous chain of clothing shops – was best known as an hotelier, property developer and two-time Melbourne Lord Mayor. But he also found time to become an expert diver.

“Dad owned boats and competed in the National Hobie Cat championships, but his passion was diving,” Matt Rockman explains.

“Along with the likes of Ron and Valerie Taylor, who he’d go on diving expeditions all over the world with, he helped popularise scuba diving in Australia. Possibly because I’m asthmatic, diving never spoke to me. But while tagging along on my father’s diving trips to places like the Coral Sea, I developed a love of boating.”

Rockman Senior took a utilitarian approach to nautical conveyances. Half-jokingly, his son traces his appreciation for more impressive vessels to his teenage years in Portsea. 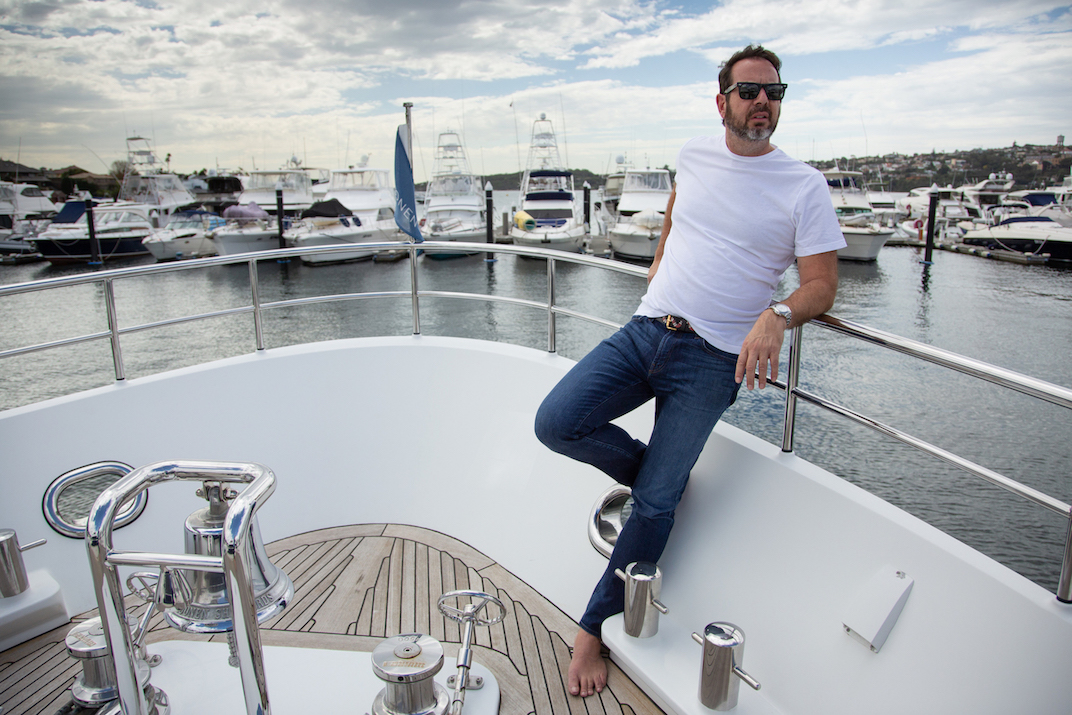 “Dad had a house there and like most Portsea residents also had a boat,” he says. “This was the 1980s and most of my mates’ fathers had a Bertram 25 Flybridge. That was the BMW 3 Series of boats and access to one came in quite handy when you were a 16-year-old boy trying to convince girls to spend time with you. My father, who insisted on something that could be winched into a boatshed, had a 12-foot aluminium dinghy with a hand tiller. That was the Holden Commodore of boats. Let’s just say my personal charm wasn’t any match for the superior cruising experience my friends could offer.”

As he transitioned to becoming a man, Rockman put away nautical things. After completing a Bachelor of Business degree at Monash University in 1989, he entered the family business just in time to experience the recession lay waste to it. “This isn’t widely known,” Rockman admits, “but when property market crashed in the 1990s my father lost his business to the banks. Almost everything that had been built up over two generations was lost. I was unemployed. I needed to either get a job or do something entrepreneurial.”

As it happened, Paul Basset – an old friend of Rockman – was wondering if job ads could be displayed online, and roped Rockman into his venture. The technology part of the equation was straightforward. However, employers and job seekers had to be sold on moving on from newspaper classifieds.

In 1998, Seek was launched with Rockman in charge of sales and marketing. In 2003, the Packers bought a 25 percent stake, and in 2005 the company went public with a market capitalisation of AU$587 million. Nowadays it’s worth north of AU$6 billion.

In 2005, Rockman stood down from the company to spend more time with his young family. Seek’s grateful Chairman, James Packer, noted, “Matthew’s persistence knocking on doors to kick-start Seek’s fledging business in its earliest days is part of the company’s history.”

While still on the right side of 40, Rockman found himself with time on his hands and a fortune vaster than any his father or grandfather could ever have imagined. He immediately got back on the water.

“I bought my first boat, a Riviera 3000, when Seek listed,” he says. “Then there was a Riviera M400, a Riviera 430 Offshore and a Cobalt A40. After all those, I bought my first big boat, a Sunseeker 82, with a buddy. That,” he enthuses, “turned me on to superyachts. So when I relocated to Los Angeles for a couple of years, I bought a 35.4 metre custom motor yacht built by Brooke Marine and designed by Don Shead. I spent a lot of time cruising around the Bahamas with my family in that.”

After selling that boat and returning to Melbourne, Rockman had planned to steer clear of superyachts, but things changed when 25.7 metre, classic Dutch-built Moonen came on the market. “Boats are impractical indulgences and superyachts suck up a lot of your time and energy,” Rockman offers. “Nonetheless, despite my good intentions, I kept trawling the global boat classifieds. That’s the equivalent of promising yourself you’re not going to get another dog then going out to look at puppies in the pet-store window. You know what’s going to end up happening.”

Rockman, a self-confessed style snob with a weakness for “classic, gentleman’s yachts”, fell for Aurora hard. “The previous Russian owner had gone with granddadish interior décor but that was easily fixed,” he says.

“I was drawn to Aurora’s beauty and the quality of her build.

Many yachts – especially ones with ultra-modern, hard-edged looks – date quickly. But Aurora has a classic design that’s timeless. It’s an elegant rather than a flashy aesthetic.” 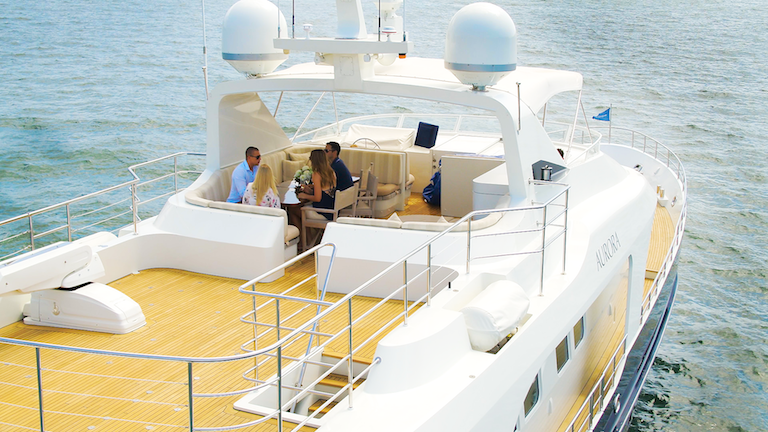 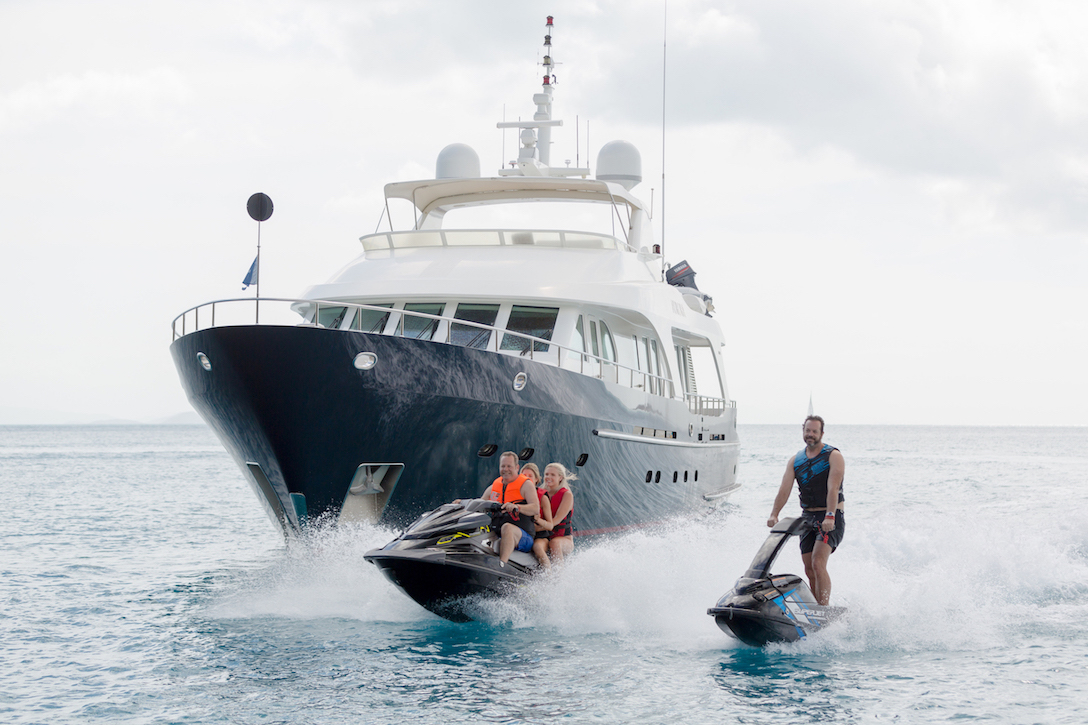 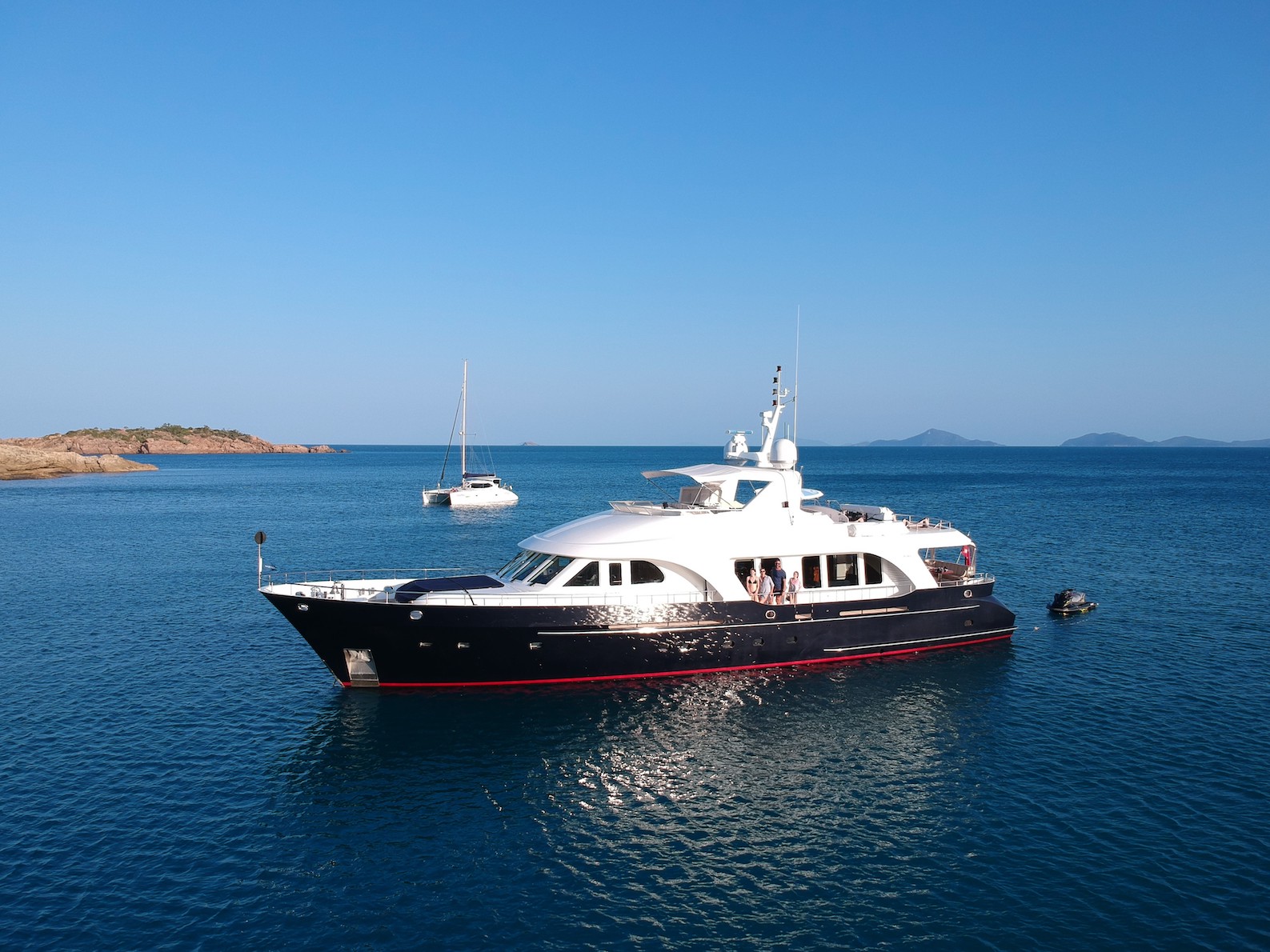 Aurora flits between Sydney and the Whitsundays and is available for charter when the Melbourne-based Rockman, who owns at least two boats at any one time, has no need of it.

While boating might be largely a recreational activity for Rockman, he can’t help but cast a businessman’s eye over the industry he’s involved with. “Even accounting for the differing population sizes, Australia’s superyacht industry is a lot smaller than what you find in Europe or the US,” he observes. “There’s not a lot of infrastructure here. There aren’t the tax incentives for boat ownership that exist elsewhere in the world. Also, crews here are expensive. Those are some of the reasons so many Australian superyacht owners have their boats overseas.”

That noted, Rockman the start-up guru is excited by the industry’s growth potential. “Compared to the Northern Hemisphere, it’s an early-days ecosystem here,” he says. “Australia has amazing attractions and waterways and it’s a nation of enthusiastic seafarers. With some good luck and good management, this is an industry that could blossom. In the coming years, I suspect there will many more superyachts, owned both by Australians and foreigners, cruising around Sydney Harbour.”

Unlike his father and peers such as Matt Barrie and Mike Cannon-Brookes, Rockman has never sought to get involved in politics. Pressed to volunteer his views, he muses on his time in the US and wonders why Australians can’t take a more American attitude to success. “I’m not a fan of the tall-poppy syndrome,” he says.

“I think Australians should celebrate success more. People should be incentivised to be successful. Then they should be expected to give back to society.”

While it’s not something he’s comfortable drawing attention to, Rockman practices what he preaches. His well-funded but low profile foundation supports a range of philanthropic projects. Many of these projects aim to “move the dial when it comes to addressing systemic challenges around poverty”.

“I feel a huge sense of obligation to give back to society,” he says. “Australia is a phenomenal country. But wealth disparities exist and there are some things we are stuffing up. As a father, it tugs on my heartstrings to see kids who have very few opportunities.”

Rockman provides mentoring and capital to start-up founders through his ROCKcorp Group. Uber, Canva and Fiverr, three of the start-ups Rockman backed, are now unicorns – start-ups valued at over US$1 billion.

While previous attempts to reduce his workload have proved short-lived, Rockman is once again attempting to scale down his commitments. “Having hit 50 last year, I’m now attempting to de-risk. I’m moving away from being an angel investor and venture capitalist into growth investing in established businesses,” he concludes. “I don’t want to wake up one day to find my business has disappeared before my eyes, the way my father did. Also, I want to be in a position to do things such as go off the grid for six months to cruise around the Mediterranean with my family.”