Ammonite has shown her stripes on the first day of the NZ Millennium Cup. Over two close races the first time entry made it clear she's here to win, with crew pulling off slick manoeuvres to see her hold onto her lead over Silvertip.

The first day of the NZ Millennium Cup has come to a close and the bar has been set high for fiercely-competitive racing.

Competitors were finishing within minutes of each other and, while crew pulled off slick manoeuvres to push their yachts to their best performances, it was Ammonite which held out in front to take both of the day’s races.

With bright conditions and a seabreeze expected to make its presence felt come afternoon, the day began with a skipper’s briefing at the Duke of Marlborough Hotel in Russell. Race officer Harold Bennett instructed the fleet before ISYR handicapper Jim Teeters took the floor.

The gathered owners, captains and tacticians were introduced to a new concept in superyacht handicap, which gained universal approval from competitors; especially once they saw the close racing which resulted from the system today. 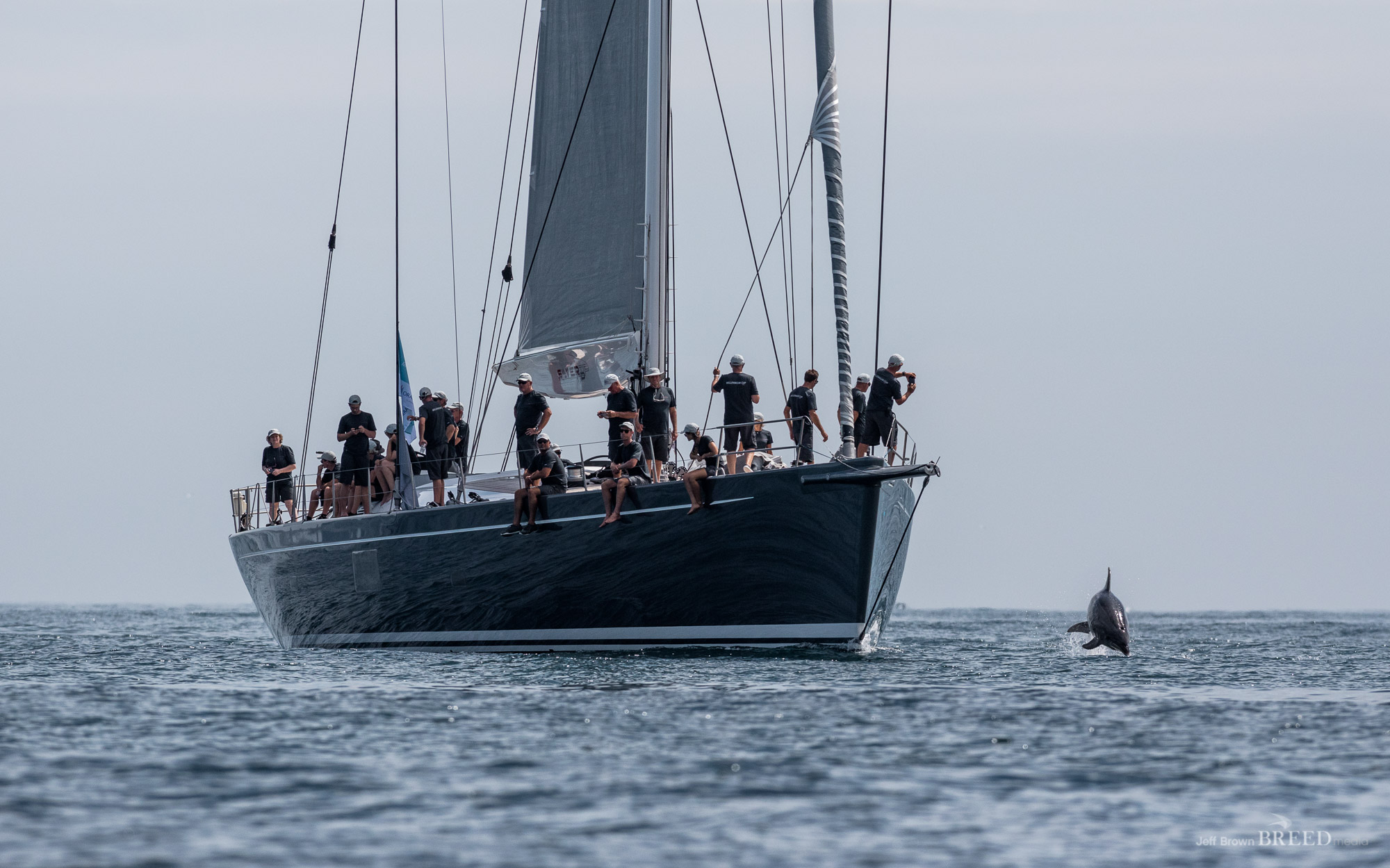 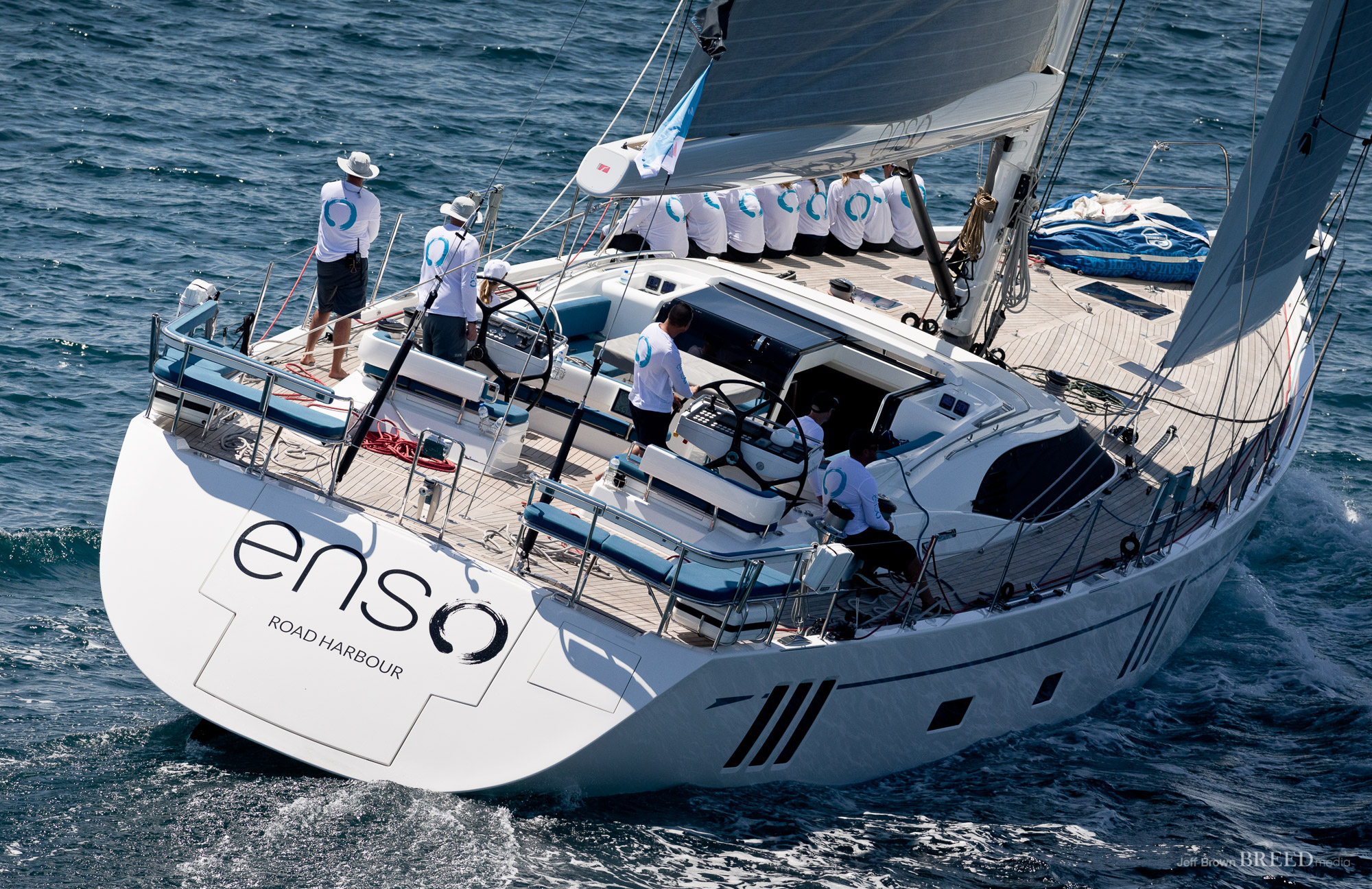 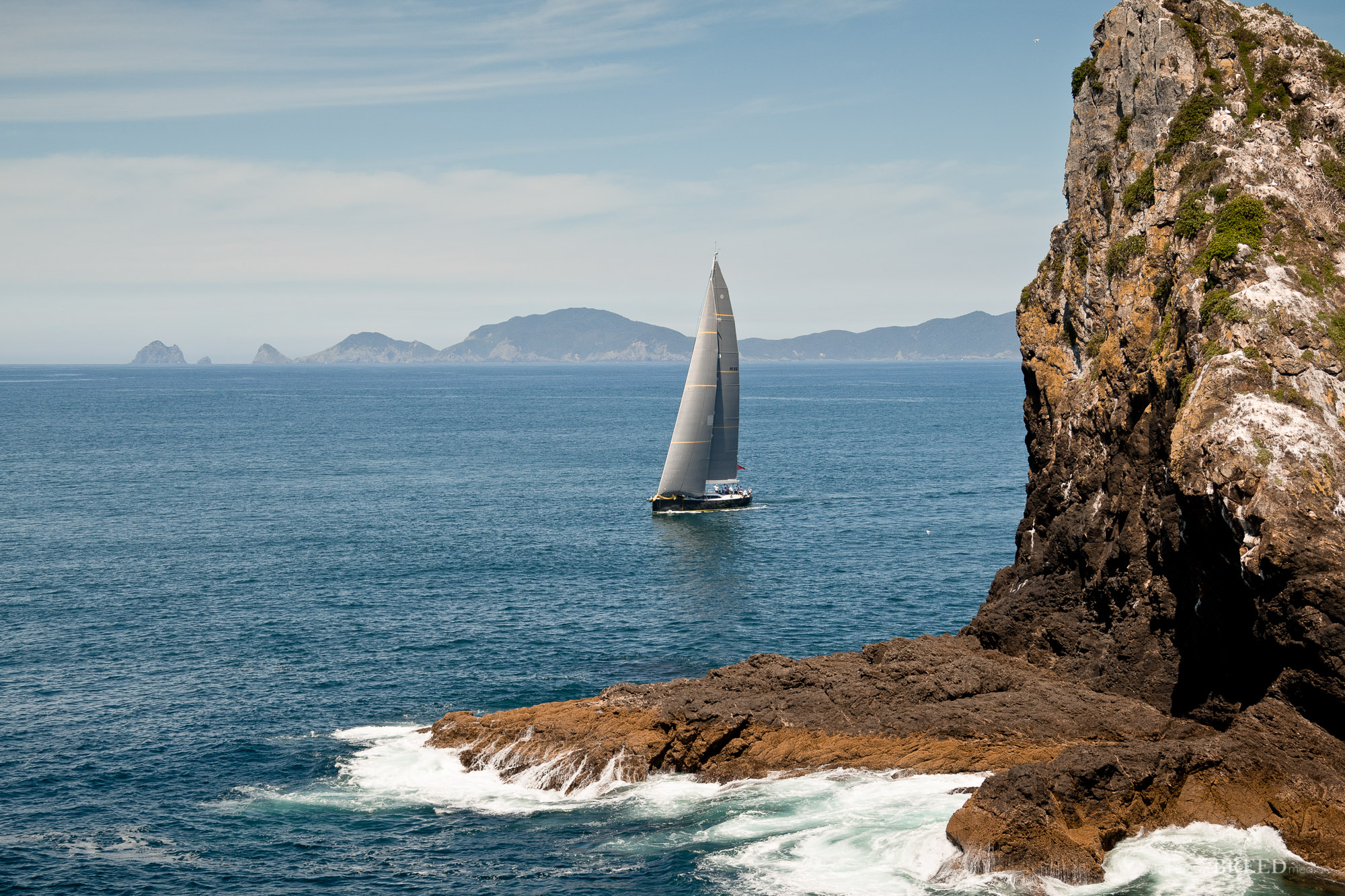 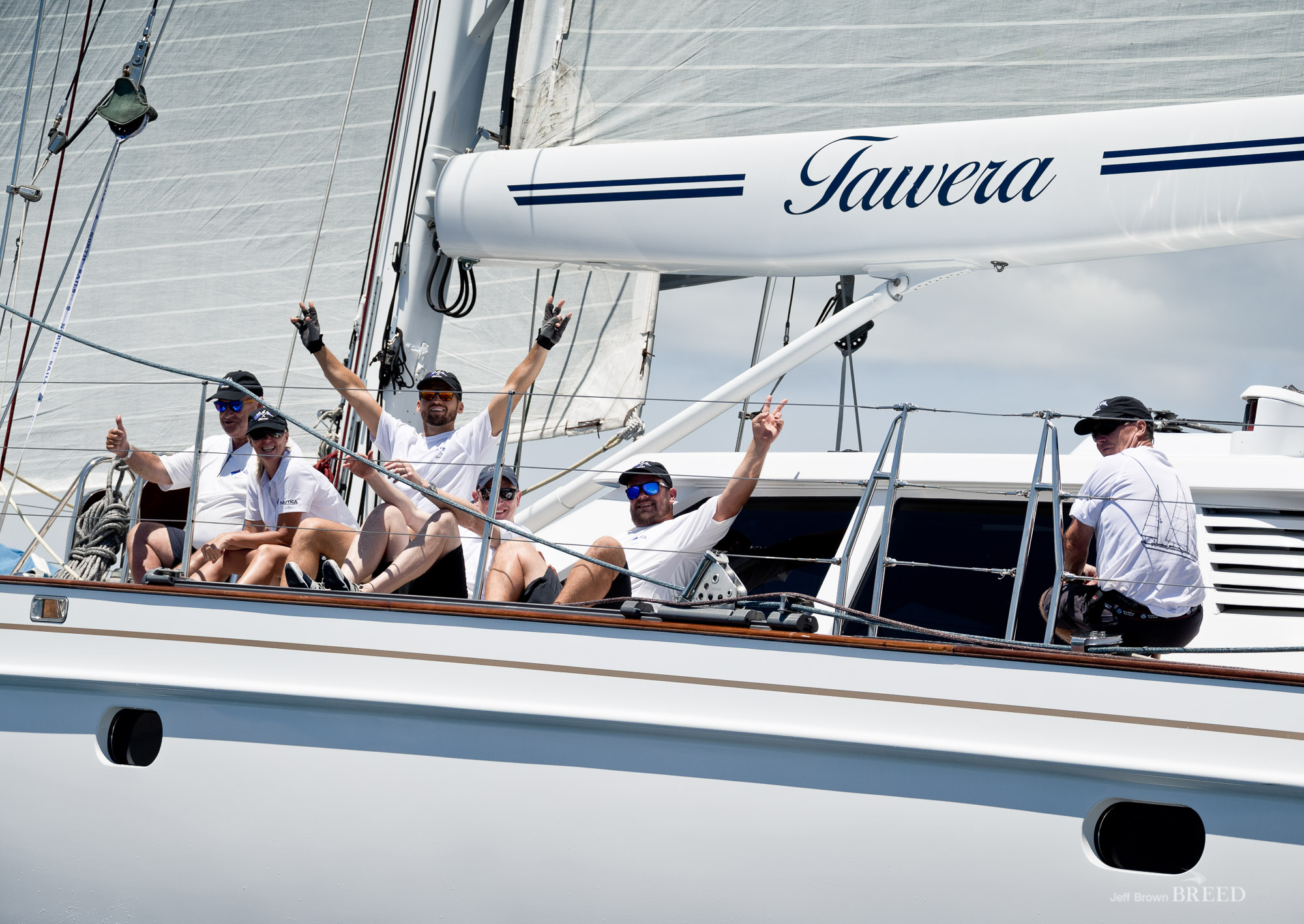 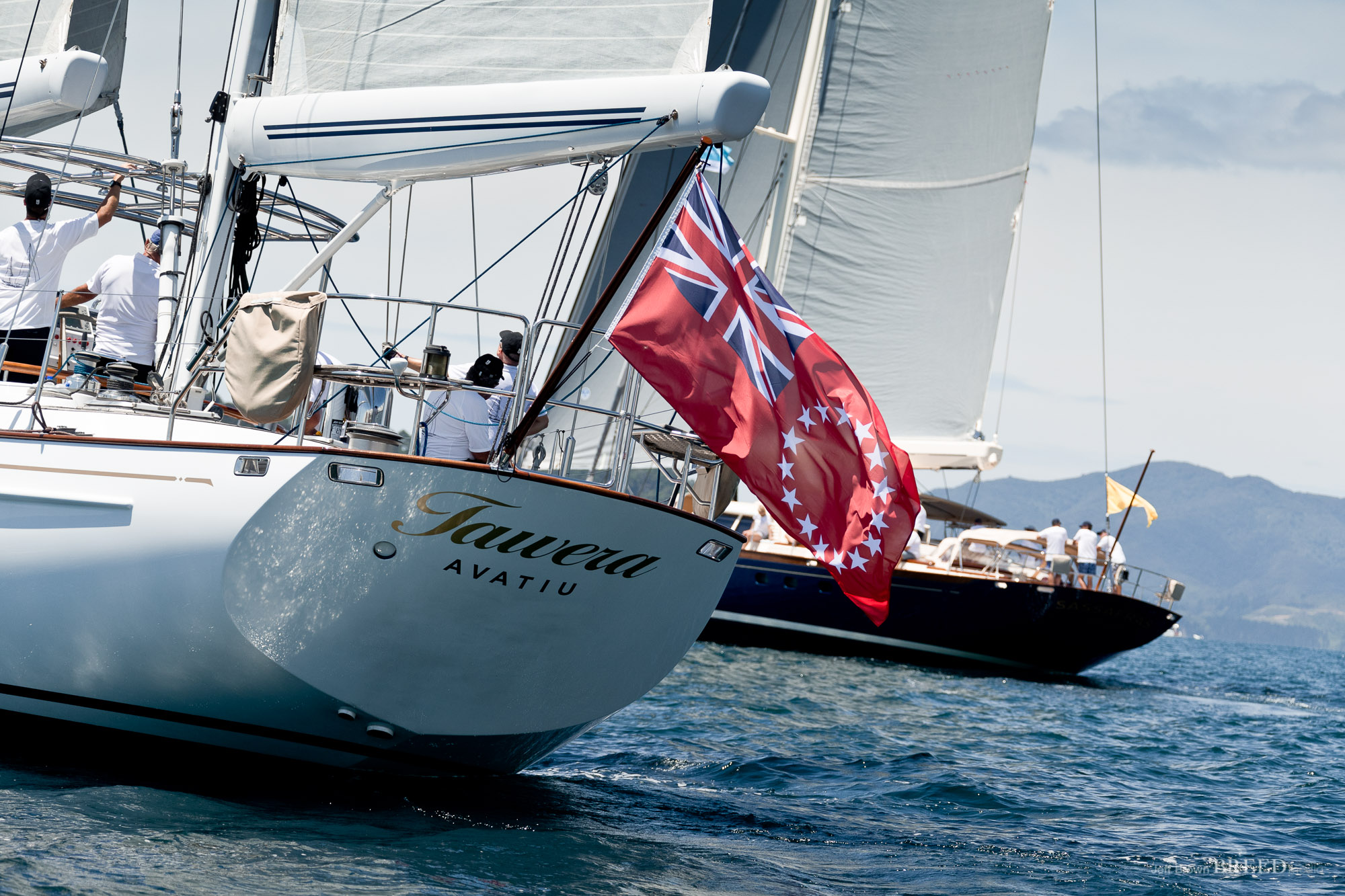 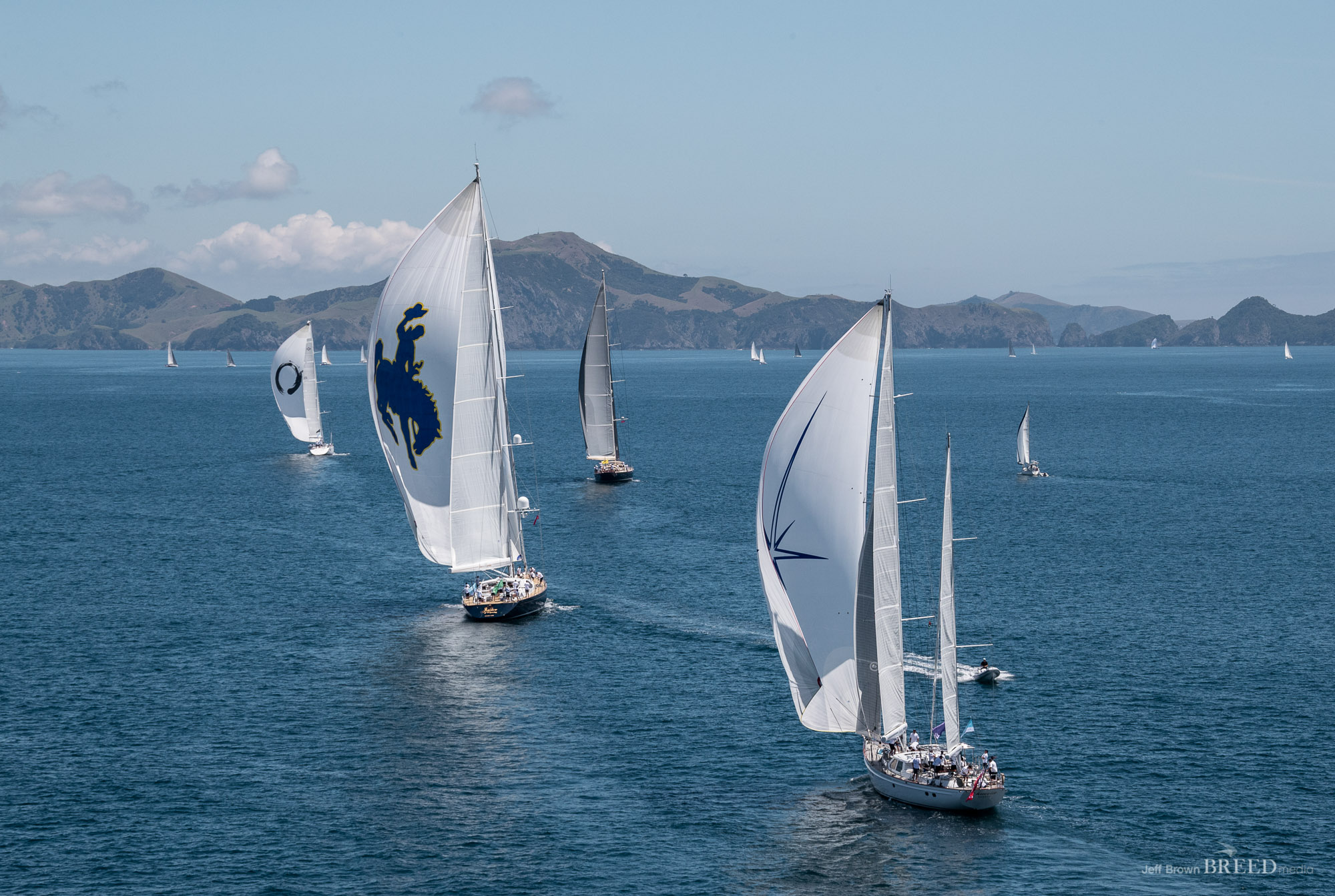 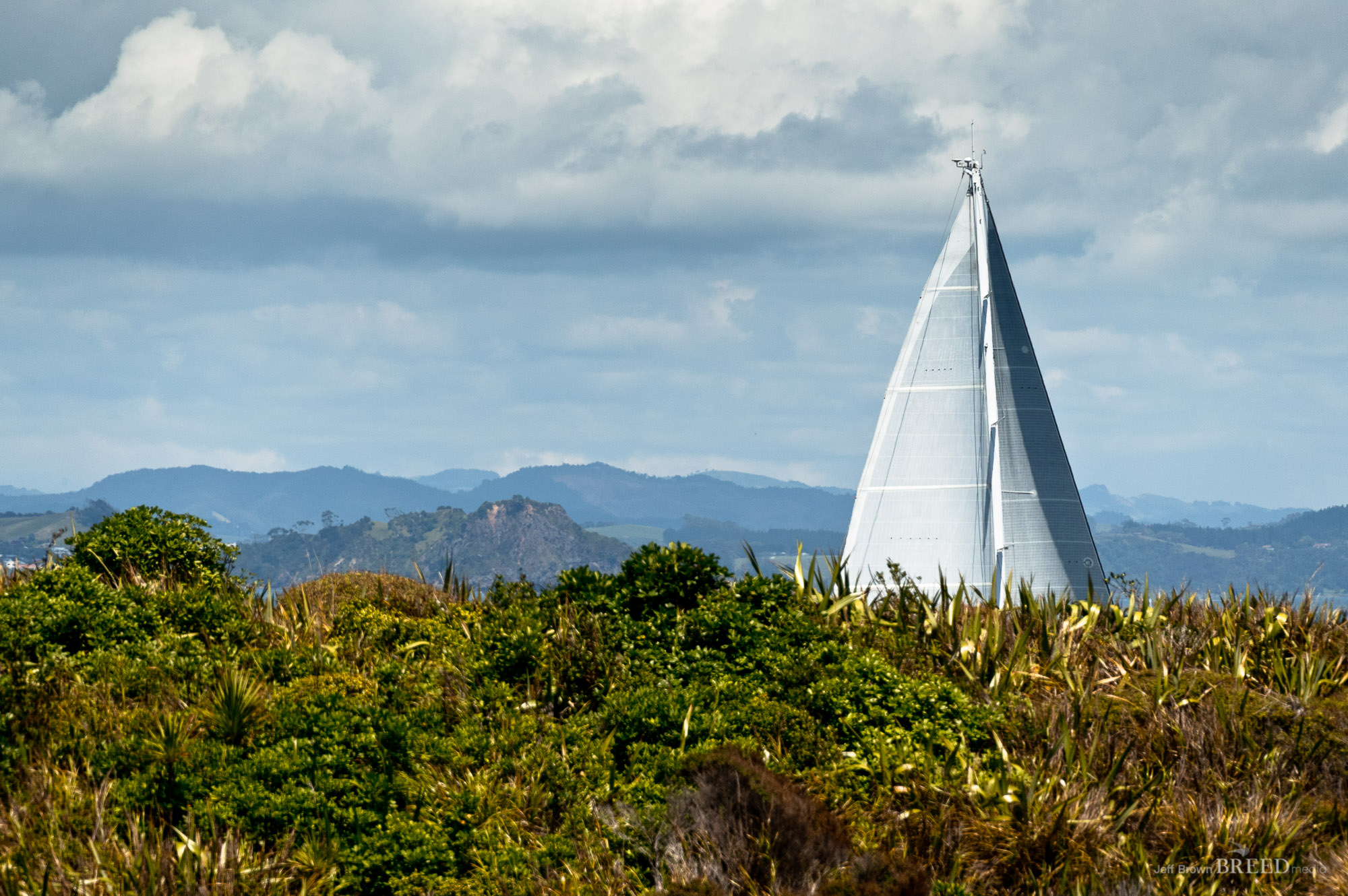 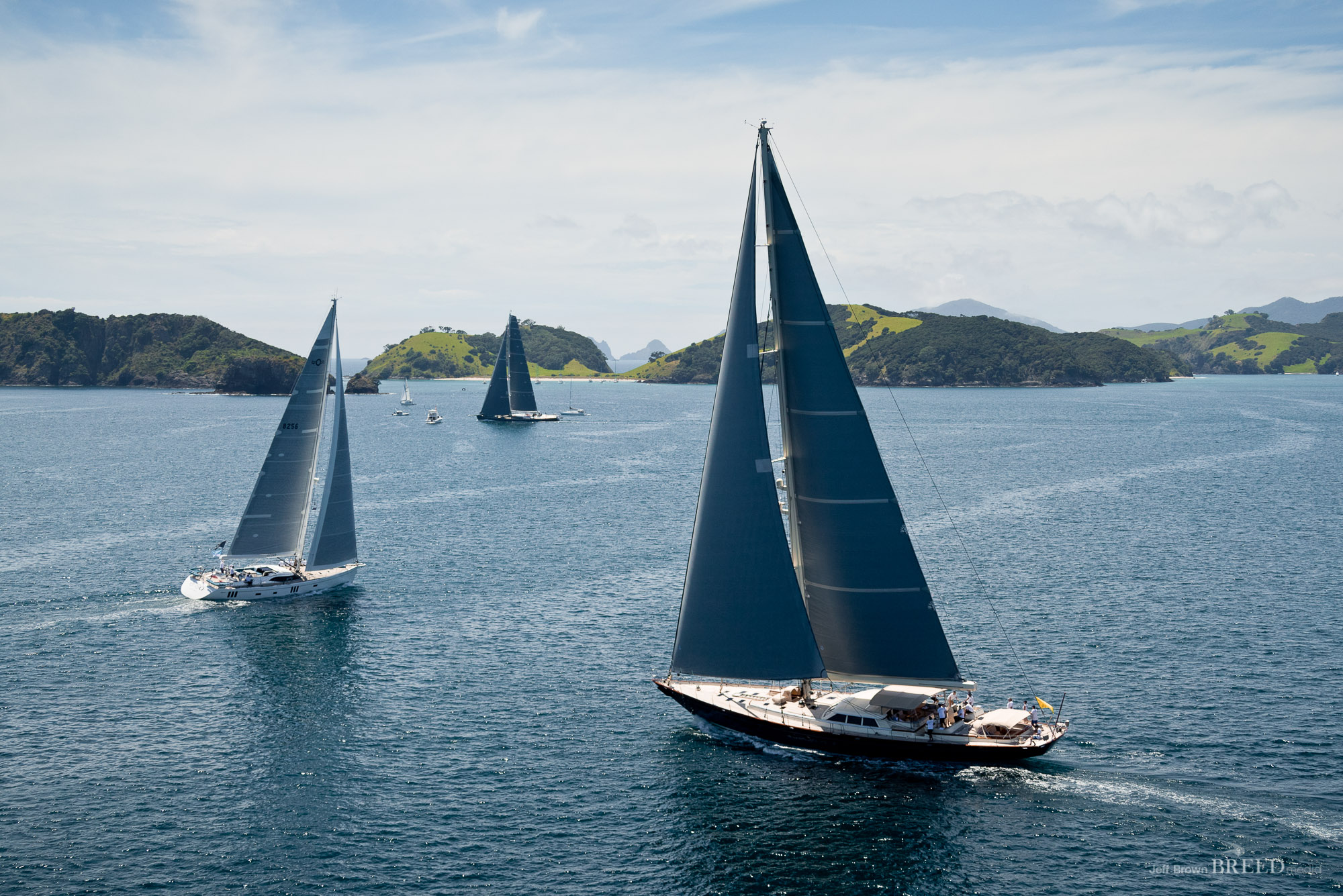 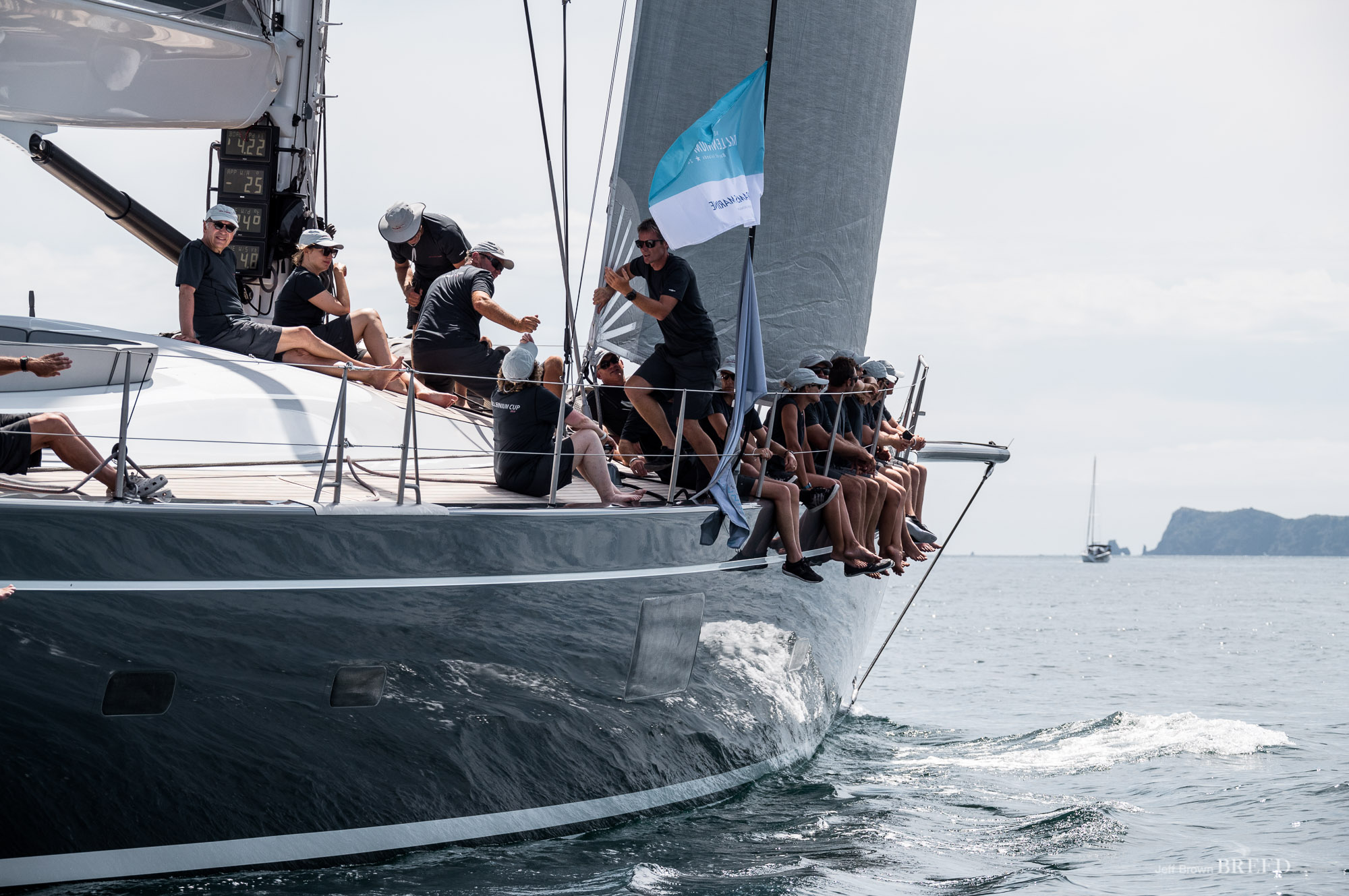 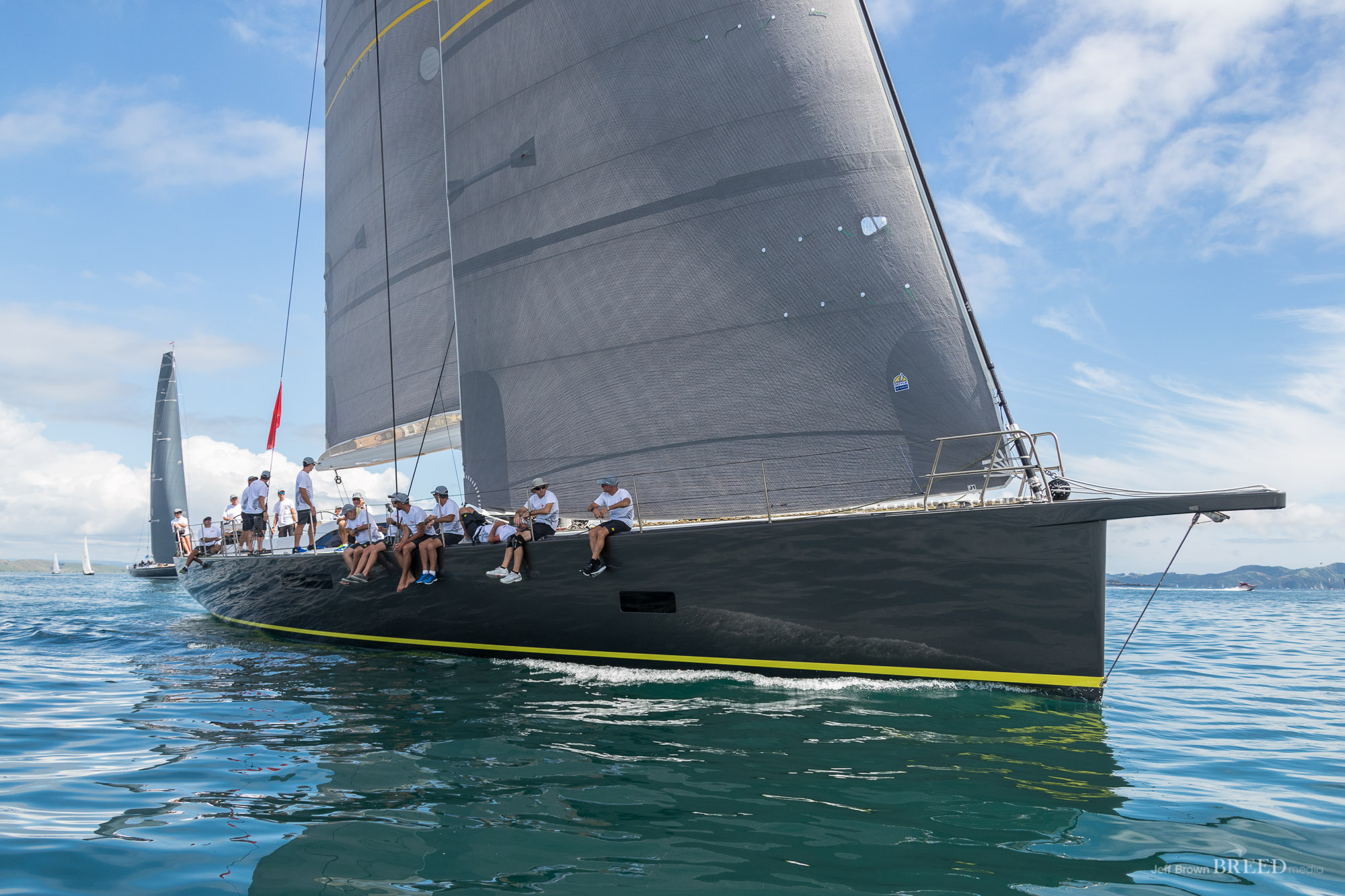 The given handicap for each boat is split; 50 per cent applied to create a staggered start, and the balance added to the finish time. On that basis, the fleet should be grouped together at the halfway stage of the race, and that was proven today.

Out on the water the first start was postponed due to a delay in the NE seabreeze coming in, though that left time for special guests to join the fleet. When first Tawera headed over the line toward the Orams Marine mark, followed by Sassafras, Enso, Janice of Wyoming, Ammonite and Silvertip – they were joined by one of the largest pods of dolphins seen in the regatta’s history.

The quick dash to the Orams Marine mark saw the handicap ratings come into their own with four boats rounding the the mark within three minutes of each other.

It was on the other side of the mark however where the tone was being set for the day’s racing; Ammonite held off Silvertip as they headed for the finish line off Long Beach in a gybing duel where Silvertip couldn’t find a lane to pass Ammonite.

Race two was the longer course of the day and Sassafras and Tawera were away first in a light but building breeze. However, that breeze abated for 20 minutes or so, disadvantaging the mid-fleet starters. Silvertip searching for a fresher breeze was the only yacht starting on starboard tack heading to the left hand side of the course, the remainder of the fleet betting on a port tack to the right.

Ammonite was introduced to her first taste of the Nine Pin when she rounded it at the head of the fleet, executing a slick gennaker hoist to mark the occasion as she headed for home.

Sassafras followed just a few minutes behind her, with Silvertip sweeping past the mark a couple of seconds after that as the Bay of Islands Sailing Week TP52 fleet filled the waters around them with a multitude of sails.

Then it was a downwind race to the finish line. The Bay of Islands was dotted with the sight of full sails as the fleet entered its second gybing duel for the day.

It was tight right to the end, but at the line it was Ammonite which bested Silvertip; crossing two minutes and 30 seconds in front of the repeat campaigner.
millenniumcup.com