One of Australia's most experienced boatbuilders talks about his career, which started at Oceanfast with Oceana C and is now coming full circle as he works on her again.

With over three decades in senior management roles within the marine industry, Kevin Altera has worked for leading-edge companies such as Oceana Holdings, Oceanfast and Superyacht Interiors. He co-founded Evolution Yachts, a luxury boatbuilding company based in Western Australia, which earned an excellent reputation for highly sophisticated yacht building practices.

Altera is undoubtedly one of the most experienced marine professionals in the Asia–Pacific region. He is a trade-qualified shipwright and has significant expertise in painting and fairing.

With global experience in the construction and project management of significant superyacht projects, including M/Y Aussie Rules and the refit of the 305-foot Lurssen S/Y EOS, he is highly regarded for his vast experience, honesty, integrity and down-to-earth approach.

Hillary Buckman, Managing Director and Editor-in-Chief at Ocean Media, sat down with Kevin to discuss his past achievements and how so many Australian marine professionals can attribute their start and experience in the industry back to the legendary Jon Bannenberg, who many believe is the father of the modern-day superyacht. 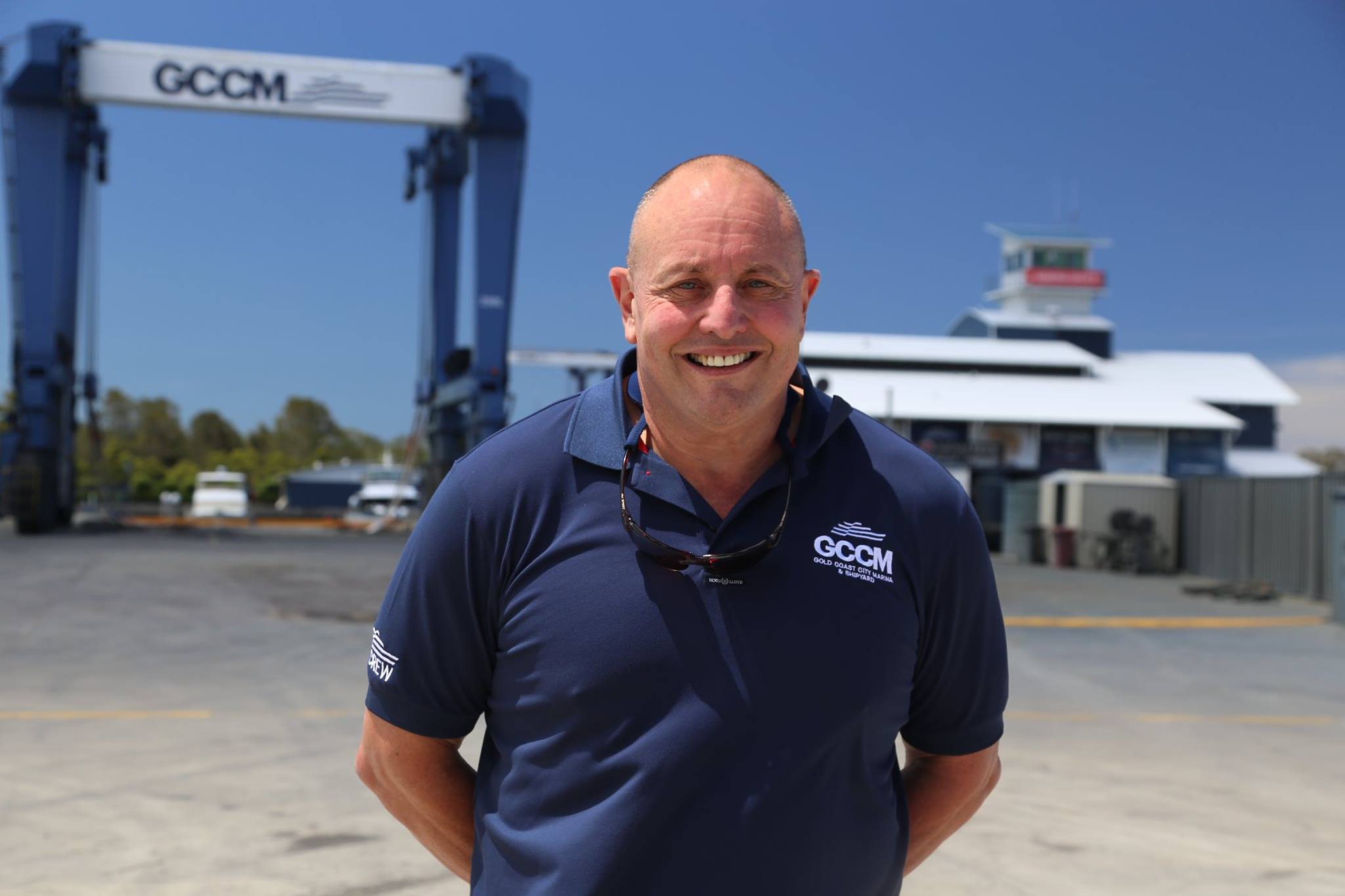 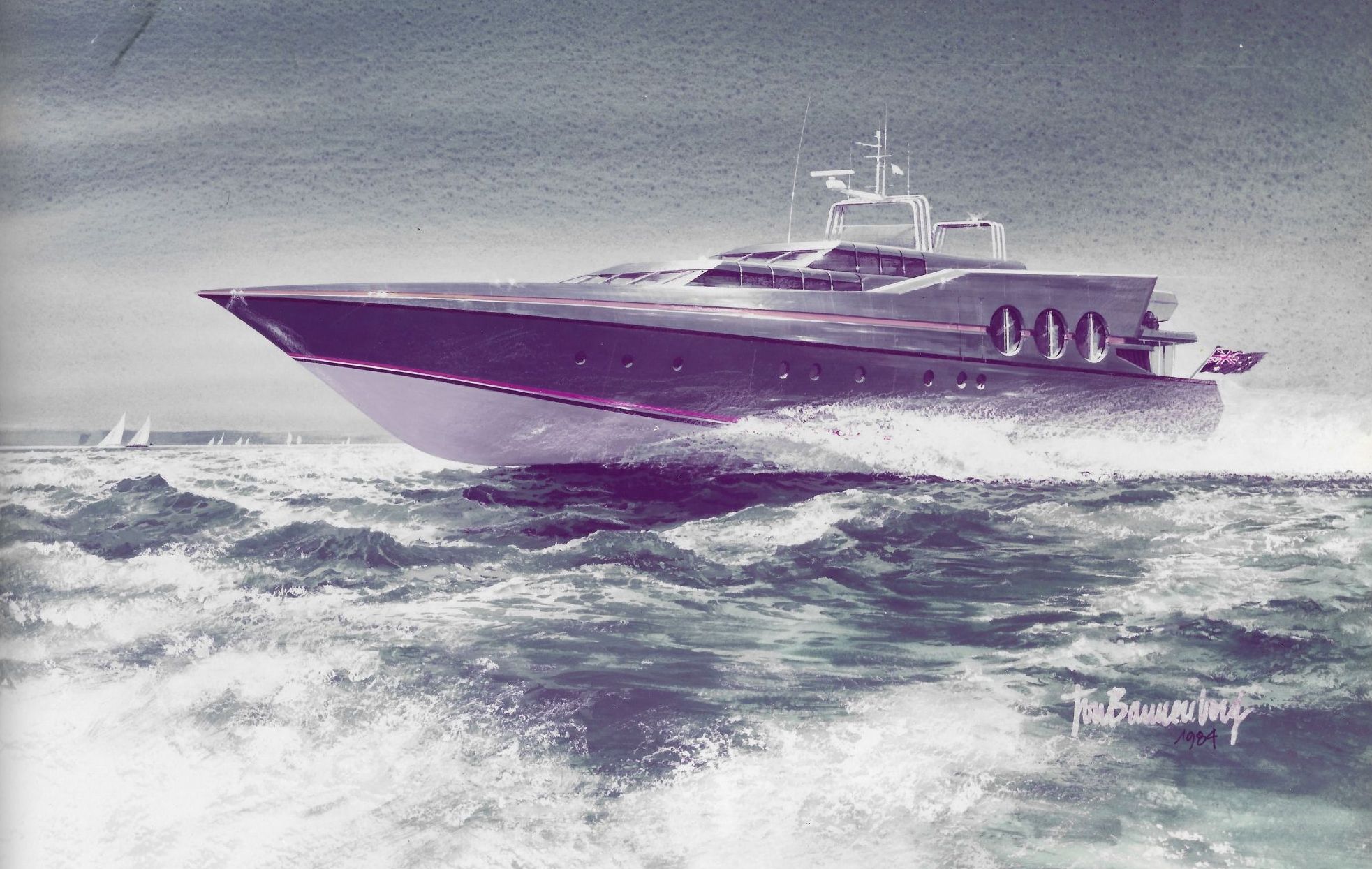 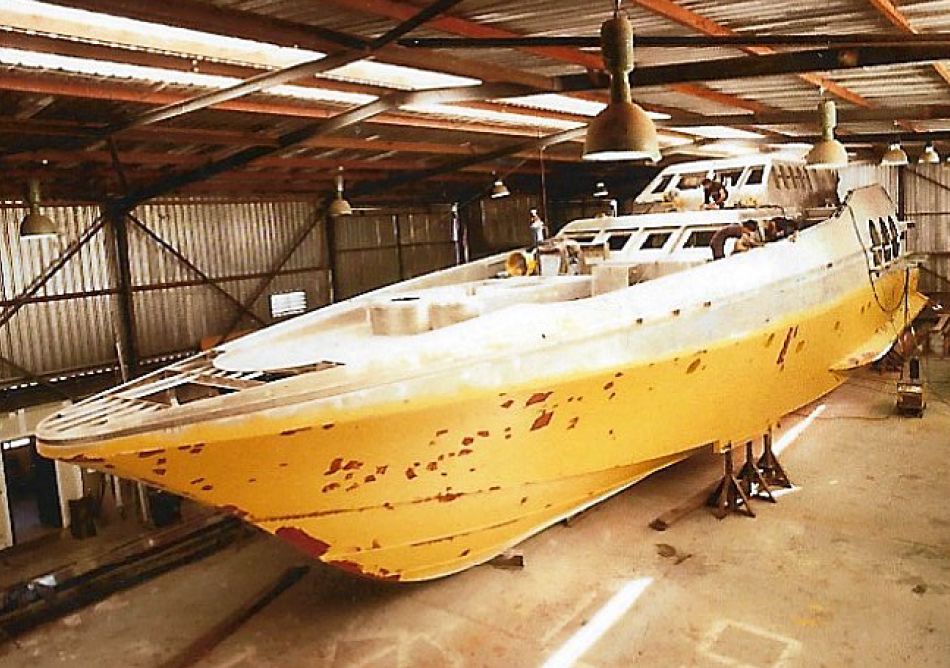 Built at Oceanfast, Never Say Never was one of Bannenberg's iconic designs.

Hillary Buckman: How did you get started in the marine industry, and how has your career developed?

Kevin Altera: At 19, I completed an apprenticeship as a shipwright in Victoria before travelling around Australia doing all sorts of things with boats. I discovered I had a knack for spray painting and concentrated on that for a while.

It wasn’t until I was in Fremantle for the America’s Cup Challenge in 1987 that I decided on my path. I saw an Oceanfast called Parts VI, and it was such a unique vessel it blew me away. I’d never seen anything like it.

It was such a stark contrast to the Stars and Stripes chase vessel, a Feadship named Carmac V, which was amazing in its own way but nowhere near as ahead of its time. Carmac V was being captained at the time by Howard Stein, who in later years became a great mentor of mine.

The difference between the two vessels was quite astounding. I was awestruck by the design and styling of the Oceanfast and decided I was going to head back to Victoria, pack my car, and move to Western Australia and get a job with Oceanfast.

I arrived in March 1987, and it took me two years to get started at Oceanfast in the middle of 1989. I started with fit-out and progressed from there, working my way to paint and fair, then to external fit-out and eventually project management.

When I first started at Oceanfast, three vessels were being built: Mystique, Opel C, and Oceana C. The next few years, working closely with the team at Oceanfast under Donald B Johnson and John Farrell, was life-changing.

We had so much opportunity, and working with the late great Jon Bannenberg was one of the highlights of my career. Later, I had the opportunity to work with other incredible designers in the industry, such as Sam Sorgiovanni, Tim Heywood, Donald Starkey, Andrew Winch, Terence Disdale, Jonathon Quinn Barnett and JC Espinosa.

In 2001, I left Oceanfast to start my own company, Superyacht Interiors. One of our first jobs was to fit out the Warren Yacht Crystal Lady, followed by the 60-metre North West Bay Ship, the original White Rabbit. We also did a lot of work for Trinity Yachts.

Superyacht Interiors eventually morphed into Evolution Yachts. We did three builds – Salacia, which is now Benita Blue, Crystal Blue (now Yot Blue) and Anya. We operated Evolution Yachts until 2009, when we succumbed to the global financial crisis.

I then spent a few years overseas in various roles in project management and owner’s representation throughout Asia, Europe and the US. I came back to Australia in 2013 and moved to the Gold Coast, where I spent a couple of years flying in and out doing similar work.

In 2016, Trenton Gay approached me to run operations here at Gold Coast City Marina & Shipyard. It’s been fantastic working with him to build the superyacht basin and, in turn, filling it as well. It’s been great working with such a wide range of vessels, crew and talented marine trades. 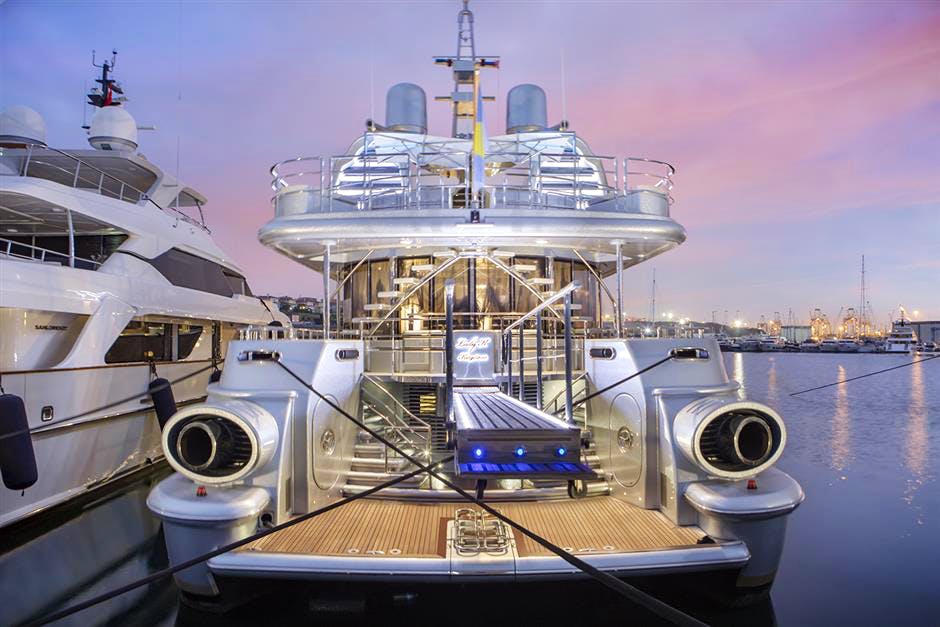 Thunder is powered by two MTU CODAG engines and propelled by triple waterjets. 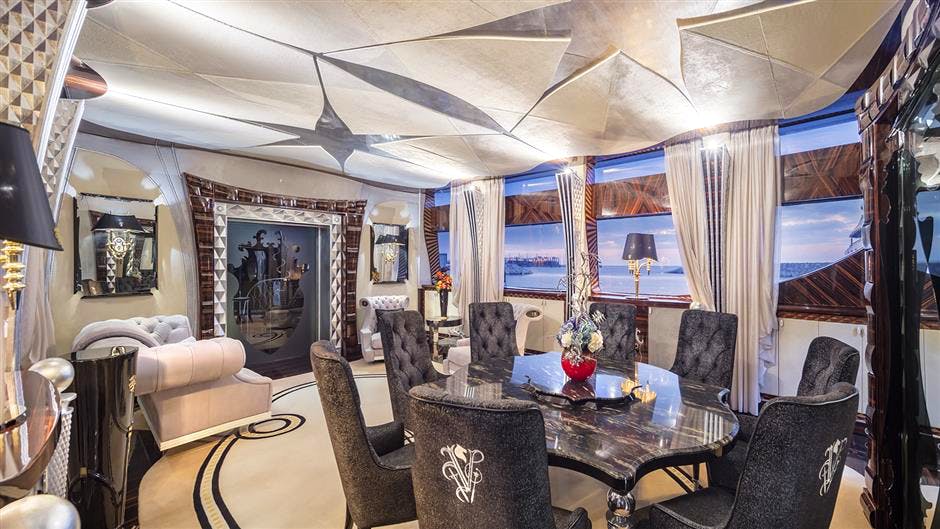 Thunder's stunning interiors were refitted in 2016 by Bannenberg & Rowell.

When you started at the Oceanfast yard, it was one of the world’s most iconic superyacht builders – what was it like working with some of the best builders and designers?

It was an incredible opportunity. We had a very tight team of people. We were learning on the run, working with materials from the aviation sector that hadn’t been used in the marine industry yet, let alone the superyacht industry. I’m sure the European builders thought we had more than one kangaroo loose in the top paddock.

I guess all that was put to rest when Thunder won the International Superyacht Society (ISS) awards in 1999 for best power 43-metre-plus and best power interior. Those early Oceanfast boats all started life as spec builds and were sold to clients along the way. The Americans loved those early yachts – they were light and fast with shallow drafts, so were perfect for getting to the Bahamas.

Having an opportunity to work with the father of the modern-day superyacht was an incredible privilege. Jon Bannenberg was an amazing man and a brilliant designer.

He used to get off a long flight from London with a whole bunch of sketches on the back of napkins and envelopes. The first thing he did when he arrived was talk to everyone to see how they were doing.

We continued to build great product well into the 2000s, although after Thunder, which broke a lot of traditional boundaries, the yachts became more mainstream to fit a changing market. It’s my belief, however, that Bannenberg, through Oceanfast, changed the direction of the superyacht and put it on the path it is today.

What are some life lessons you learned from Jon Bannenberg?

Jon taught us that we should never limit ourselves, to push boundaries further than we ever thought possible, and have confidence when everything was failing. Most of all, he taught us to always be humble and give credit to everyone around us. 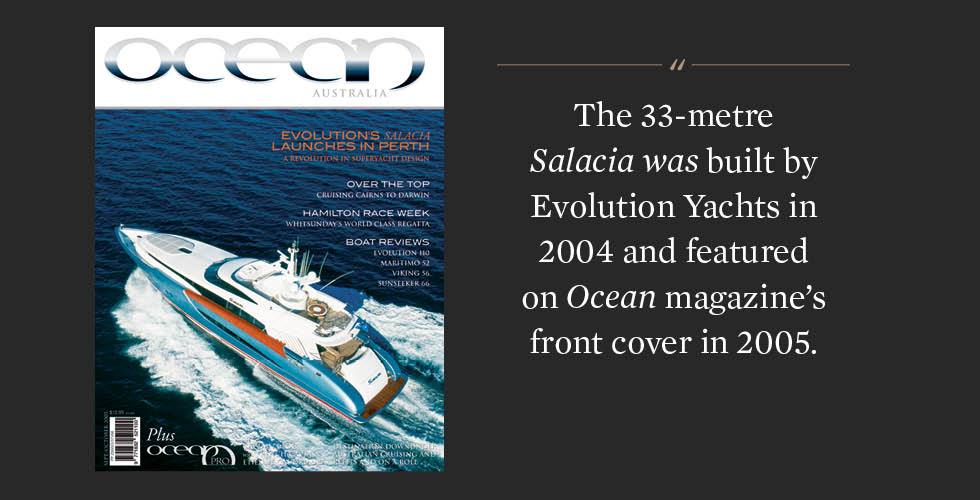 We first met in 2005 when you had launched Salacia at the Evolution Yachts yard. It was the first yacht from Evolution Yachts to exhibit at the Monaco Yacht Show that year. How do you think the industry has changed over this time?

Launching Salacia in 2004 and exhibiting at Monaco in 2005 was a career highlight. I could never have imagined displaying a vessel we had built in Australia from a company we started with just six guys.

The industry over that time has changed a lot and very little at the same time. Technologies have developed at a staggering rate, so have processes, machinery and materials, but the fact remains, these are works of art still built by hand and eye – they are the most luxurious, detailed and opulent item that can be owned.

Oceanfast launched 23 superyachts over a 20-year history. Do you think Australia will ever get back to the glory days of yacht building?

There’s an enormous opportunity. The market has changed a fair bit, and there’s now the possibility of focusing more on potential Australian/New Zealand buyers as there are many more of them.

We have the talent pool available here to build incredible superyachts. The feedback we get from international owners and captains regarding the skill of our trades is consistently outstanding.

To get back to those glory days, we need the support of the people who can afford to purchase these vessels. Government support would also help get the ball rolling and provide confidence in the private sector to invest in shipbuilding.

If you think back to when we were flying high, there was a lot of support from the commonwealth government. We had a program called The Bounty, which supported creating Australian jobs in this sector and making our products more attractive to the domestic and international market.

The Export Finance and Insurance Corporation (EFIC) also worked closely with the marine sector to provide finance options for the builds. They’re still around, but we need to re-engage them in the marine sector and highlight the potential for Australian jobs. The global demand is there, and we most certainly have the skills.

The tide might be starting to turn, but we need support from the government. We should be incentivising Australian owners to build their yachts here so that Australia can reap the reward from the employment these multimillion-dollar vessels create. 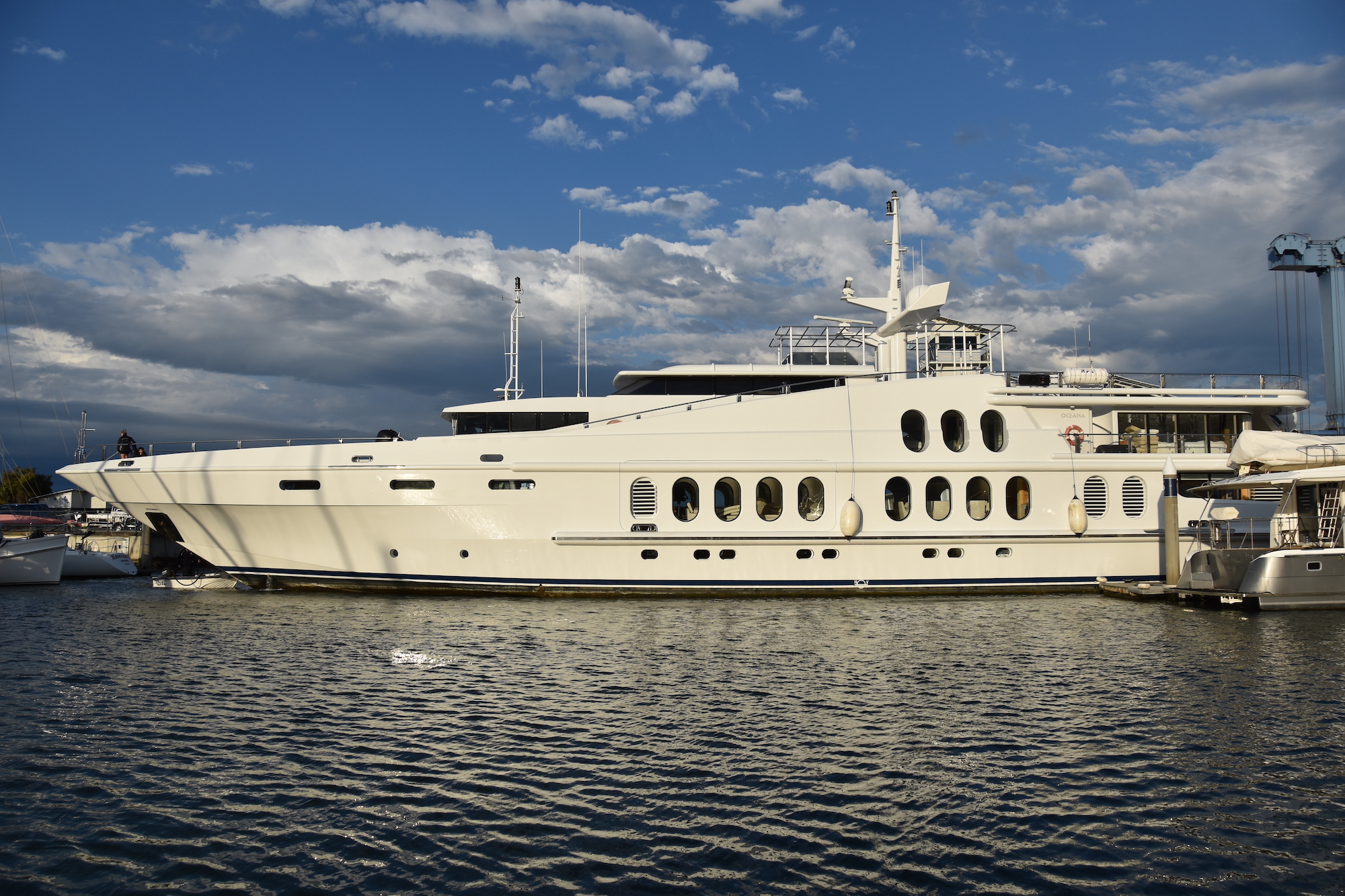 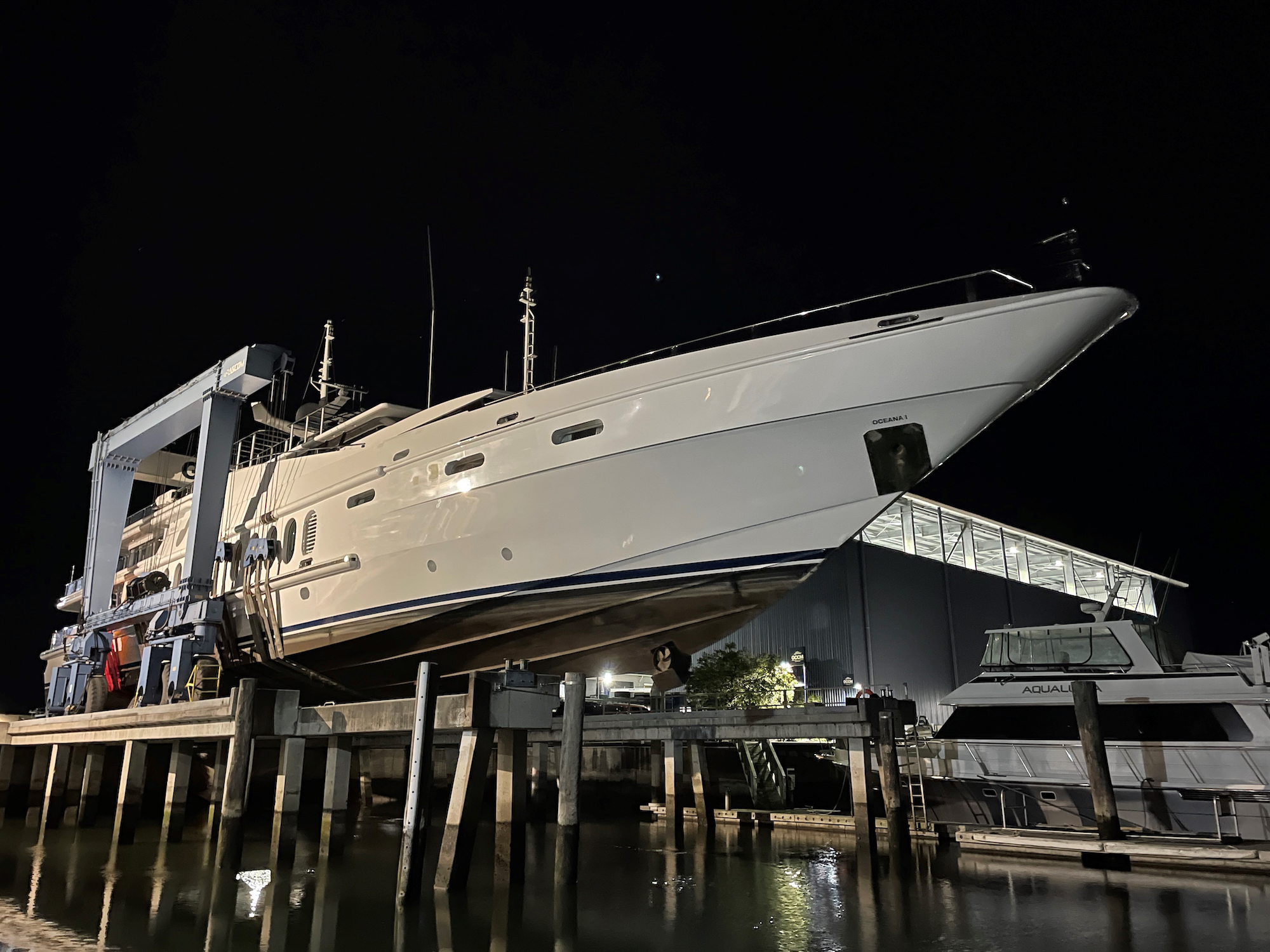 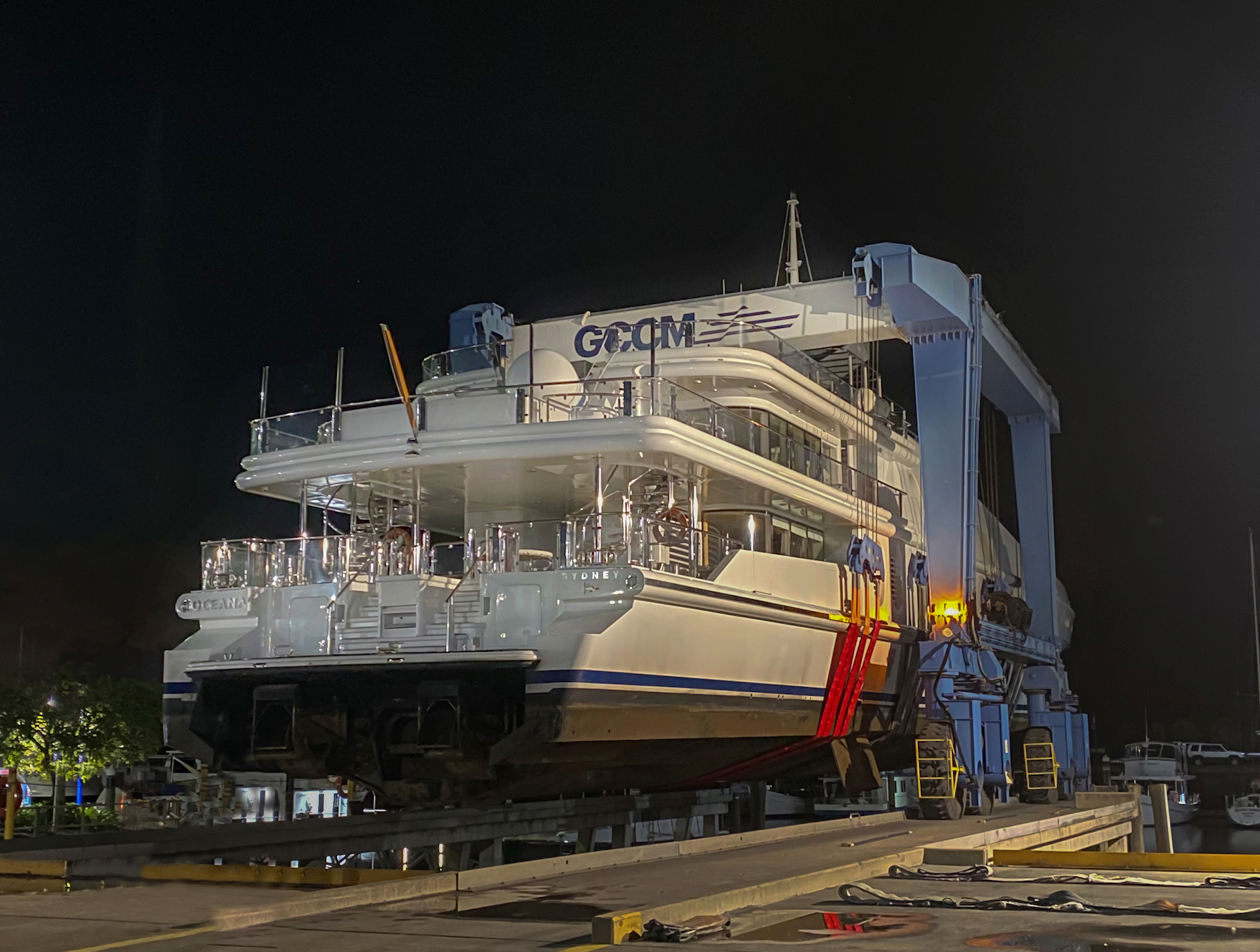 One of the yachts launched in 1991 while you were at Oceanfast was Oceana C, now named Oceana 1. This 55-metre Australian-flagged superyacht is currently in service at Gold Coast City Marina & Shipyard (GCCM). How does it feel to have this yacht back in Australia and in your yard?

After 30 years, it’s an incredible feeling to have the yacht back in your care and see how good she looks in today’s market.

We launched Oceana C in 1991. It had gullwing doors fitted to the tender bays on the port and starboard sides, which turned into what is now known as beach clubs. Some of the features on this yacht were well before their time, and it’s taken the industry 20 years to catch up.

Oceana 1 was the first superyacht to be lifted in your upgraded ASCOM mobile boat hoist, which can now accommodate 300 tonnes. How will this help attract more yachts to the Gold Coast?

It wasn’t just about attracting more yachts, it was about being able to service our long-term customers who are upgrading and increasing the size of their vessels. The demand was there. GCCM has always been about continual and sustainable improvement to meet the needs of our customers and the market.

Australia has some of the best yachting facilities in the world, and they’re improving year on year. What would you say to an owner from the other side of the world who’s considering bringing down their yacht? (Let’s say post-pandemic.)

As an industry, we have to work closely with our contacts, our governing bodies and our neighbours to create an environment these owners want to visit. As an industry, we need to be very aware of what we’re offering these yacht owners. Everything you’ve promised needs to be delivered.

The South Pacific is a magnificent place to be – it’s rich in culture and diversity, and it offers a level of privacy and safety for owners.

We need to spread the word that anything done in Europe and America can be done here to the same standard or higher. Enough yachts have been here now that they know what it’s about.

At GCCM, we aim to ensure every yacht leaves our facility raving. Word travels fast on the water. Captain-to-captain and owner-to-owner referrals are still our number-one form of promotion.

Last question: what do you miss about not being able to travel to the international boat shows?

I miss the general interaction with our overseas counterparts and strategic alliances; these relationships play an integral role in our industry. Zoom is fantastic, but nothing beats face-to-face contact.

Of course, it’s also about keeping up with the latest technology and the physicality of seeing how each vessel is being crafted, where design is trending and how people around the globe are pushing forward with sustainable yachting and shipyard solutions.

All of this inspires us to keep raising the bar with everything we do here in Australia.