The Australia SailGP team dominated the final race in Aarhus to win back-to-back SailGP events in front of Danish royalty.

Although light winds plagued Aarhus Bay on the final day of racing at the ROCKWOOL Denmark Sail Grand Prix, the on water-spectacle was nothing short of dramatic.

Tom Slingsby’s Australia SailGP Team emerged as victors – beating Japan and Great Britain in the final podium race – to score back-to-back event wins on what was one of the most challenging race days of the season to date that saw the teams racing with three crew in front of royalty.

Slingsby’s victory got the royal seal of approval and HRH Crown Prince Frederik of Denmark was on-water to present the team with the celebratory Champagne Barons de Rothschild, following his own experience on board the Danish F50 earlier in the day.

The hard-fought consecutive event wins maintain the Aussie’s position at the top of the Season 2 championship leaderboard, proving the team’s masterful balancing act of both high wind and light breeze conditions – some of which has been inspired by Nathan Outteridge’s Japan team. 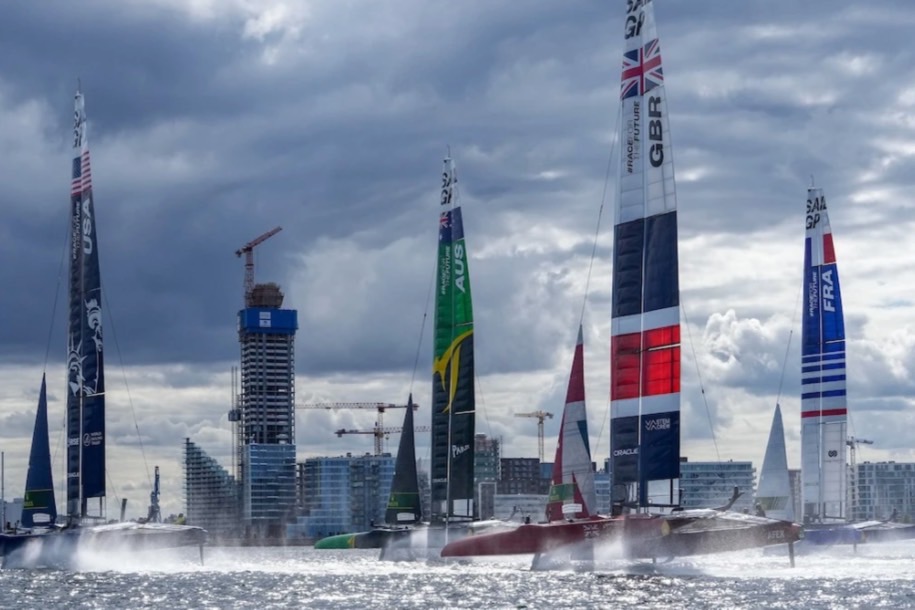 Despite stiff competition, Australia was triumphant in Denmark. 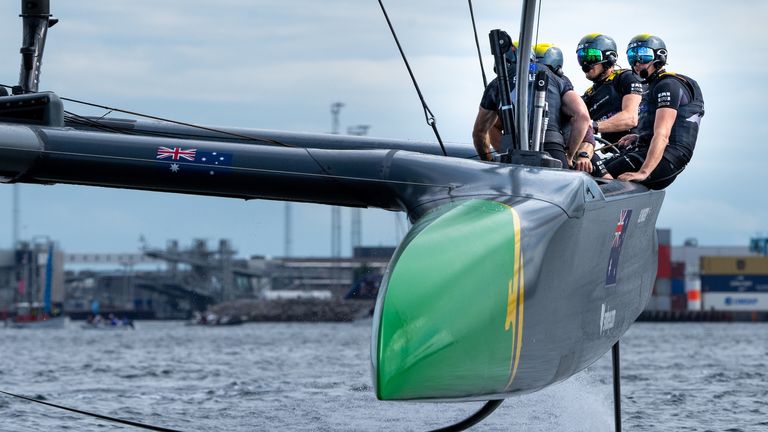 The Aussies have won back-to-back events.

Slingsby said: “A second win in a row is very satisfying. It was pretty stressful out there. It was very light winds and still very obvious that Nathan [Outteridge] has an advantage in these conditions. Fortunately, the last race went our way. We got a good start, there was a lot of argy-bargy behind us and we managed to sail away.

“I will happily say I have been copying Nathan and his team. In the past, they have copied us in the heavy air conditions but in light winds, they are a step above us. So, we looked at all their data – you can’t hide anything. We are still not there. Nathan had two firsts, we had a near last today, so we have a long way to go but fortunately, the last race went our way,” said Slingsby.

The final three-way battle between Australia, Great Britain, and Japan had the teams grappling for position on a shortened, shifty course, searching for wind, and struggling with contentious umpire decisions. The intense rivalry between Australia and Great Britain continued, but not without kudos and admiration.

“It’s not often you get to beat Ben Ainslie on a racetrack – he is a legend, he is the greatest of all time and losing this event doesn’t change that.

“He is an unbelievable sailor and you really have to sail at the top of your game to beat him. Our team did that today and I am so proud of the whole team.”

Wind hunting was the theme of the day and Japan had the most success finding it. Outteridge, also known as the Wind Whisperer, and his team pulled off two race wins to solidify a place in the final podium race.

Outteridge said: “We were just happy to be in the final race. We left a lot of points on the race course yesterday and so we felt that if we had a good day today we could make the final. We won the first two races today, which was awesome. We would have loved to take the win but if you averaged up the entire event, then second is really good for us.”

Although winning the entire event was a strong likelihood, Japan ended up in the runner-up position in Denmark, following controversy with Ainslie’s British team that resulted in the Brits being hit with a double penalty against Japan – the first for the initial incident and a second for taking too long to shake the penalty. Disgruntled and dismayed, the umpire’s double-layer penalty knocked the wind out of the British team, inevitably relegating them to a third-place finish.

Ainslie said: “It is difficult with the umpires. They have a tough job to do and everyone accepts that but every now and then you get a shocking call, and that was right up there in my experience of a terrible call. That was a shame as it ruined the race but it’s what we have to deal with, it’s part of the competition. We will review it with the umpires and learn from it.

“It felt like a cheap shot from Nathan and I think it’s something the umpires need to look at closely. It is a tough one, but I have said my piece and it’s time to move on.” 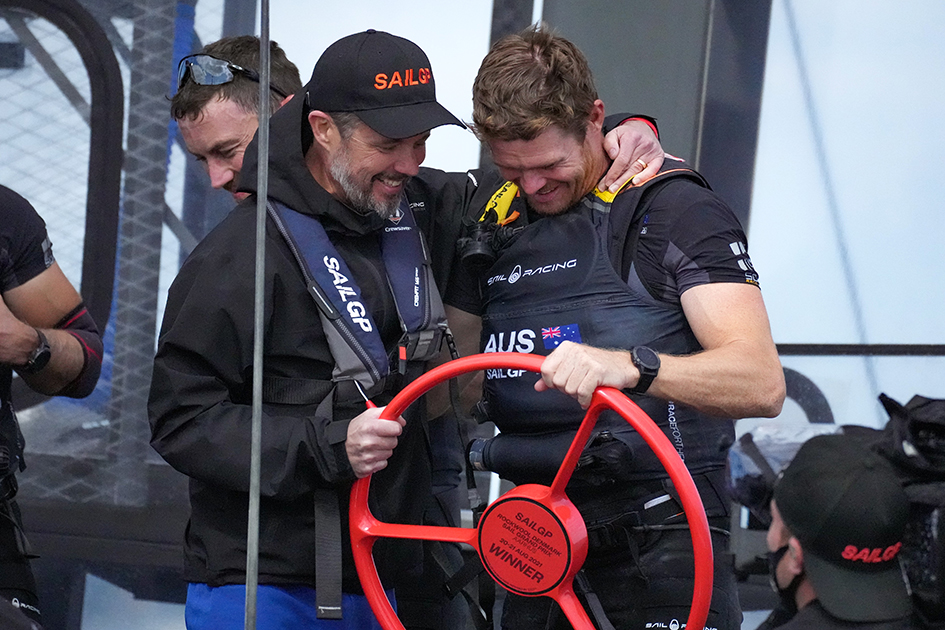 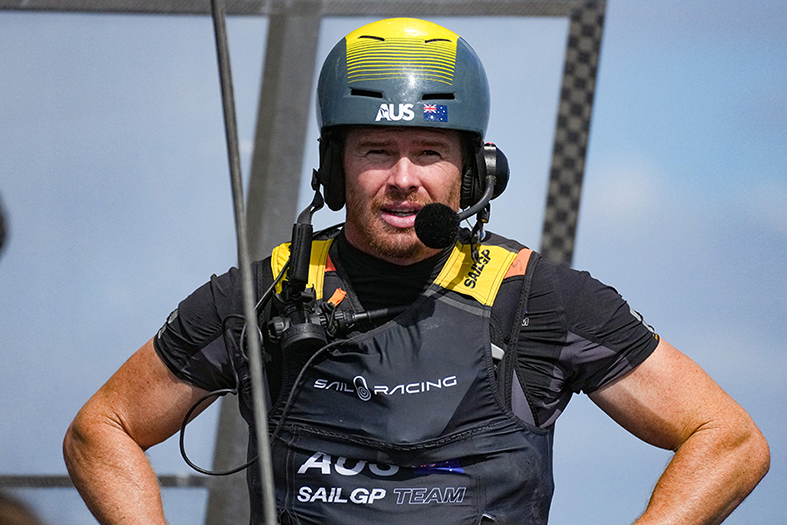 Despite the disappointment in the final race, Ainslie was quick to put rivalries aside to congratulate the Aussies.

Ainslie said: “The Australian’s sailed a great race. We can’t try and take that away from them. They deserved the victory and, to be honest, we were racing for second with Japan. It’s a shame as it’s a point lost in the overall season but we will move on and try and get it back in Saint-Tropez.”

As one of the youngest teams in the fleet, Nicolai Sehested’s Denmark SailGP Team presented by ROCKWOOL had a great start to the home event in Aarhus with its first-ever SailGP race win on the opening day. The following races would reveal the team’s challenges with finding enough air to get them up on the foils while overcoming obstacles created by France and the US, who were penalised for their actions against the home team.

Sehested said: “It was a disappointing day today but you can’t dwell on it, you need to shake it off and move on. It has been a fantastic event and has just been amazing to sail on home waters – we enjoyed it a lot.

The ROCKWOOL Denmark Sail Grand Prix ends with Jimmy Spithill’s US team in fourth – missing the final podium race by one point – Peter Burling’s New Zealand in fifth, Denmark in sixth, and Spain and France taking seventh and eighth spots, respectively. A tough result for Spain who lost a day’s racing due to a capsize ahead of racing on the opening day but, following a mammoth effort from the SailGP shore and technical teams, saw the Spanish boat back out racing on day two.

With less than a month before the fifth event of the season, all teams are instantly thrown into preparation for the showdown in Saint-Tropez, France, on 11 and 12 September. Home team favorites Billy Besson’s France SailGP Team will be looking to improve on its disappointing result in Denmark to wow the crowds in the ever-popular French Riviera.

Following Saint-Tropez, the league will complete its final European event in Cadiz-Andalusia, Spain (October 9 and 10) before heading to the Southern Hemisphere for the Sydney Sail Grand Prix on December 17 and 18 to finish off 2021.