Ulysse Nardin, the event sponsor for the past decade, will present two new models at the Monaco Yacht Show.

After a “year off”, the Monaco Yacht Show is back in action and will once again welcome lovers of sumptuous yachts, incredible destinations and luxury getaways in Port Hercules.

A leading manufacturer of navigational instruments since 1846, the Swiss watch manufacturer’s has been living, breathing, growing and creating new timepieces to reflect the rhythm of the waves and the sea.

This year, to celebrate its 175th anniversary, the company is offering two new limited editions of its DIVER and MARINE Megayacht watches, both inspired by the Ocean and enhanced with new colours – touches of red and a special “Monaco Yacht Show” signature for the DIVER, and rose gold instead of platinum for the MARINE Megayacht. 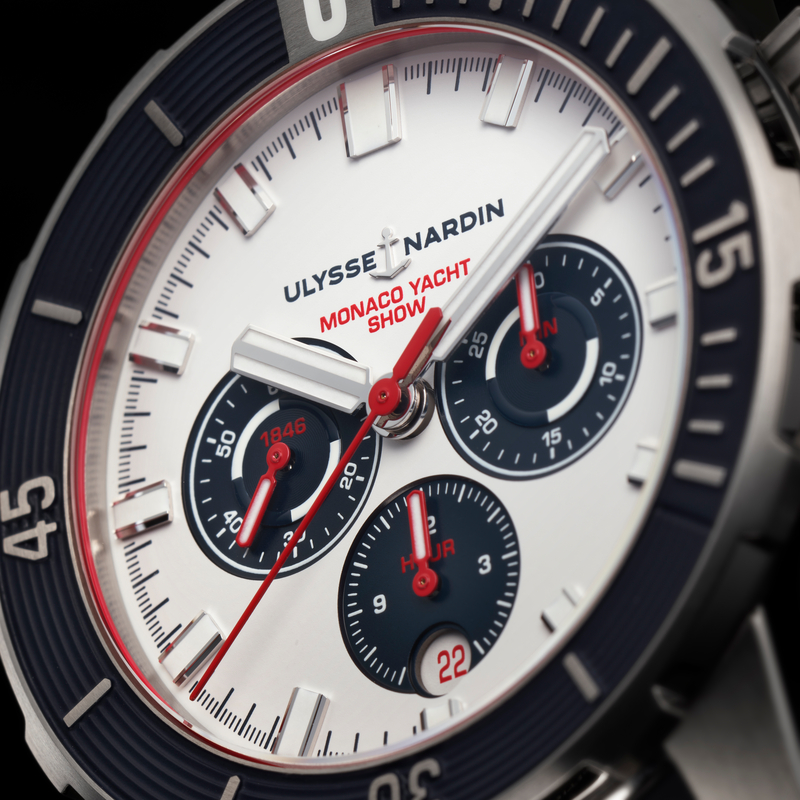 The new Monaco Yacht Show Limited Edition is the jewel in the crown of the DIVER collection.

The Monaco Yacht Show and Ulysse Nardin, the Show’s official sponsor for over 10 years, share a passion for the sea, for Excellence, for precision and for innovation.

The new Monaco Yacht Show Limited Edition is the jewel in the crown of the DIVER collection, an ultraresistant model that does not falter in the face of any attack, even from the most ferocious sharks.

The limited edition, available in only 100 pieces, has a sapphire caseback and is driven by the Manufacture UN-150 automatic movement with silicium and a 48-hour power reserve. The model is also adorned with touches of red: from the bezel joint and the seconds hand, to the hands on the small counters and the date.

Also, the “Monaco Yacht Show” signature is featured under the Ulysse Nardin logo. The case, the bezel and the UN element are made of titanium and the bezel is coated with rubber.

Naturally, this model has all the features of a diver’s watch: ultra-resistant sapphire crystal, screwdown crown, Superluminova on the 0, rotating inverted bezel for optimal readability, even in the deepest waters, and water resistant down to 300 meters. There are several strap options: rubber, metal or fabric with a Velcro fastener. 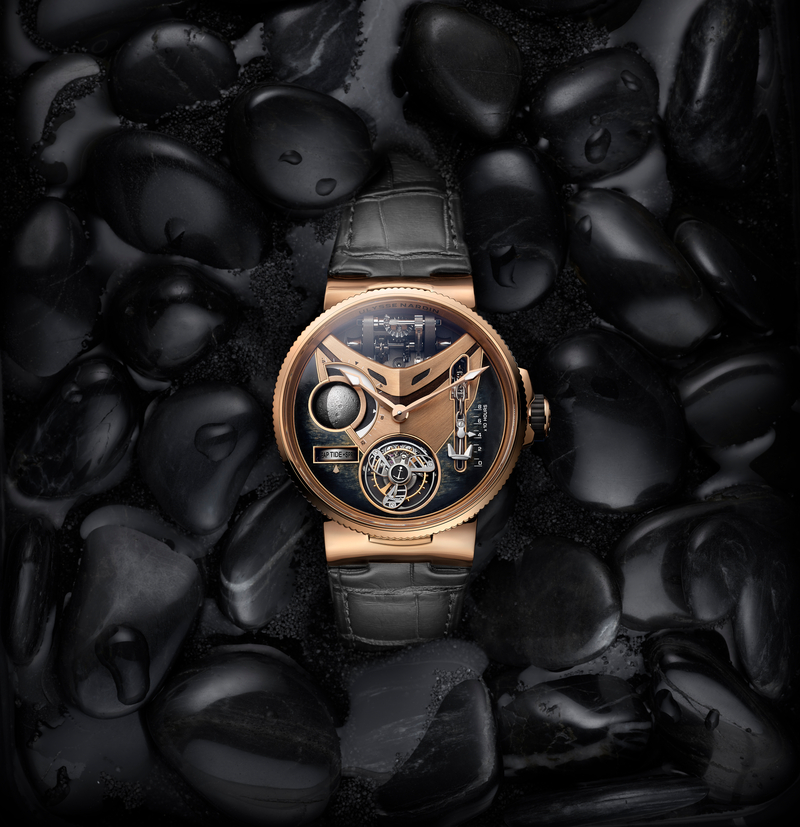 With its diameter of 44 mm, the Marine Mega Yacht watch displays on its dial the streamlined bows of a luxury vessel. Magnificently reproduced in 3D, it seems to surface from a pool of white gold as though it were emerging from the mist, and cuts through a sea of “Grand Feu” Enamel on a wave of foam portrayed with astonishing realism.

To guarantee perfect timing, this construction is regulated by a flying tourbillon. To ensure the watch is firmly anchored in the nautical world, the cage of the flying tourbillon is decorated with a propeller with its blades specially honed to guarantee the highest level of performance for latest-generation yachts.

And since every detail counts, the hands, with their design inspired by the venerable marine timepieces that the manufacturer has always supplied, move majestically above this scene, like the lamps of lighthouses or buoys floating on the horizon out at sea.

This powerful beating heart of the watch has a diameter of 37 mm, features 504 components and is wound by hand. It guarantees a power reserve of 80 hours at a cruising speed of 21,600 vibrations per hour, with the tourbillon rotating at 60 rotations per hour (or one rotation every 60 seconds).

Its first role is to provide an analogue time display, giving a three-dimensional presentation of the phases of the Moon and containing a mechanism that displays the height of the tides in real time in relation to a specific location, in addition to indicating the seasonal coefficients, once the mechanism has been adjusted by the action of the winding-crown, the position of which is measured in a window opened up in the side of the watch-band in the same way as the screen of an exercise telegraph.

Since watchmaking is above all an art form, the anchor, with its contemporary design fashioned in the form of a plowshare, linked to the chain by the anchor ring (and which itself passes through a mooring chock which might have been thought to be entirely decorative), moves in response to the movements of the winding-crown so as to indicate the power reserve.

Keen to be as realistic as possible, Ulysse Nardin has perfected an authentic miniature windlass, visible at 12 o’clock. Through the action of a set of conical wheels in contact with the winding mechanism of the barrel, the latter turns to simulate the raising of the anchor, even when the winding process has been fully completed, for the pleasure of any curious observers.

The display of the phases of the Moon is made with the aid of a precise 3D reduced-size representation of Earth’s satellite, and which, in order to make a special impact, presents a surface reminiscent of the Moon’s actual surface by reproducing it through the use of an ultra-precise engraving. It is made up of two half-spheres, one treated in blue PVD (for the period of the new Moon) and the other rhodiumised (to simulate the illuminating effect of the Sun).

Its adjustment in relation to the annual calendar is undertaken through the winding-crown, once its indicator is in place on the telegraph window opened up in the side of the watch-band is placed on the corresponding indication (S: Set position for setting the hands/TM: Tide and Moon position/W: position for winding the movement).

This watch is certainly the only one of its kind and should offer its 30 future owners a way to follow the manoeuvres made by the crew of their yacht, the name or motto of which may be engraved in the plaque positioned on the side of the watchband so as to make it truly unique.