It seems to be the case that the weight of a purchasing decision is relative to the size of a vessel being purchased. Knowledge, decisiveness and forethought are essential elements to ensure full gratification. Joe Pengelly recently acquired a Riviera 72 Sports Motor Yacht, and was so confident, he crossed the Tasman Sea on its maiden voyage.

“This is our seventh boat, our last being a Riviera 61 Flybridge Series II,” says Joe. “I travelled everywhere, including boatyards in Taiwan and factories in the UK looking at any boat from 90 to 115 feet. It became apparent that Cheryl was nervous about having anything larger than 100 feet. And then Dean called.” 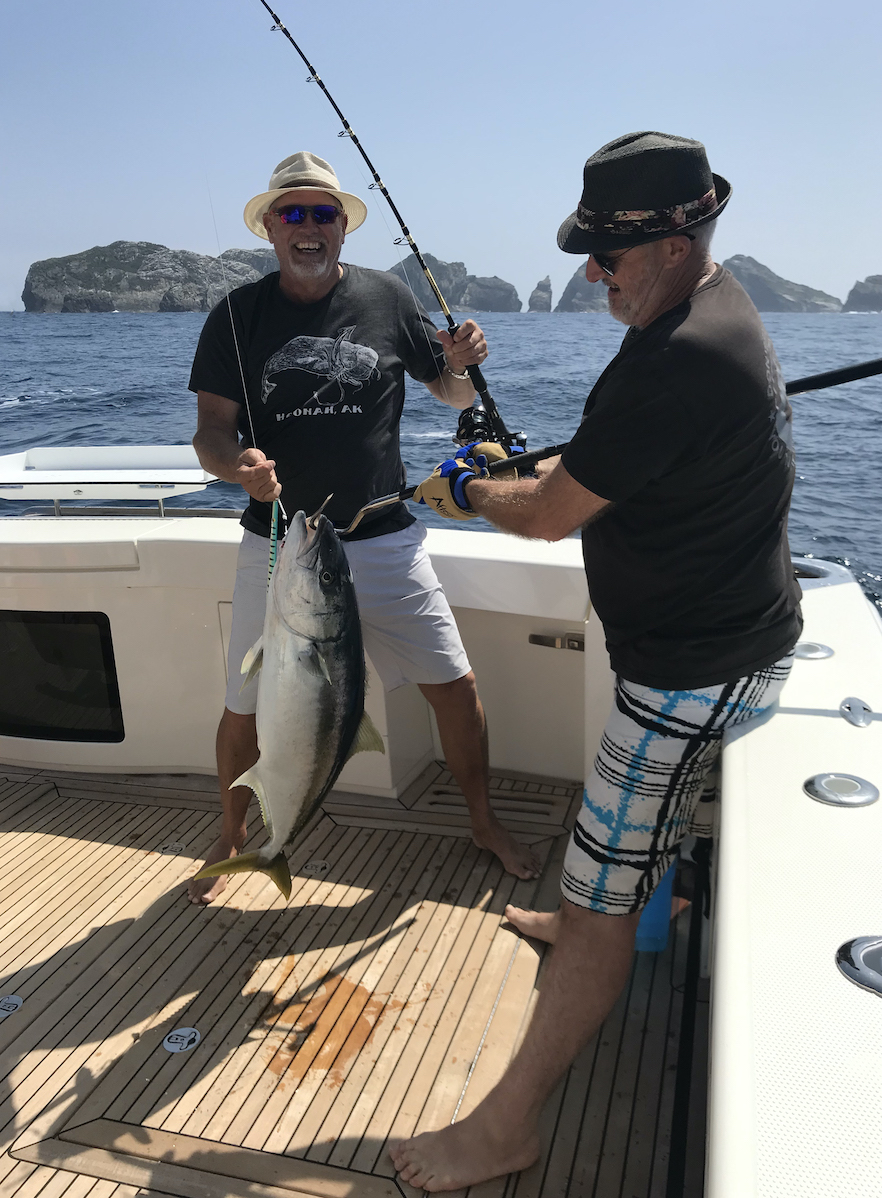 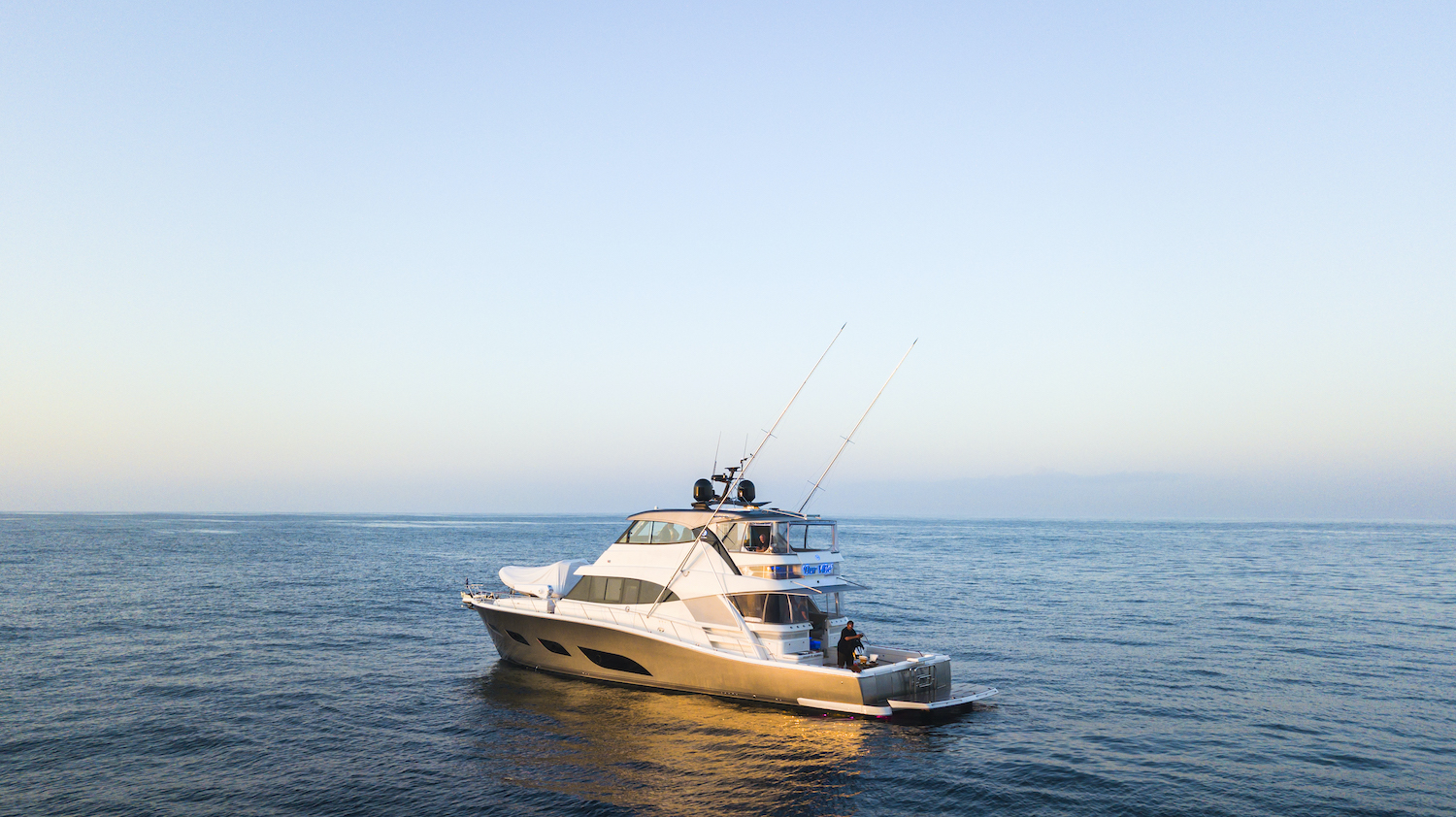 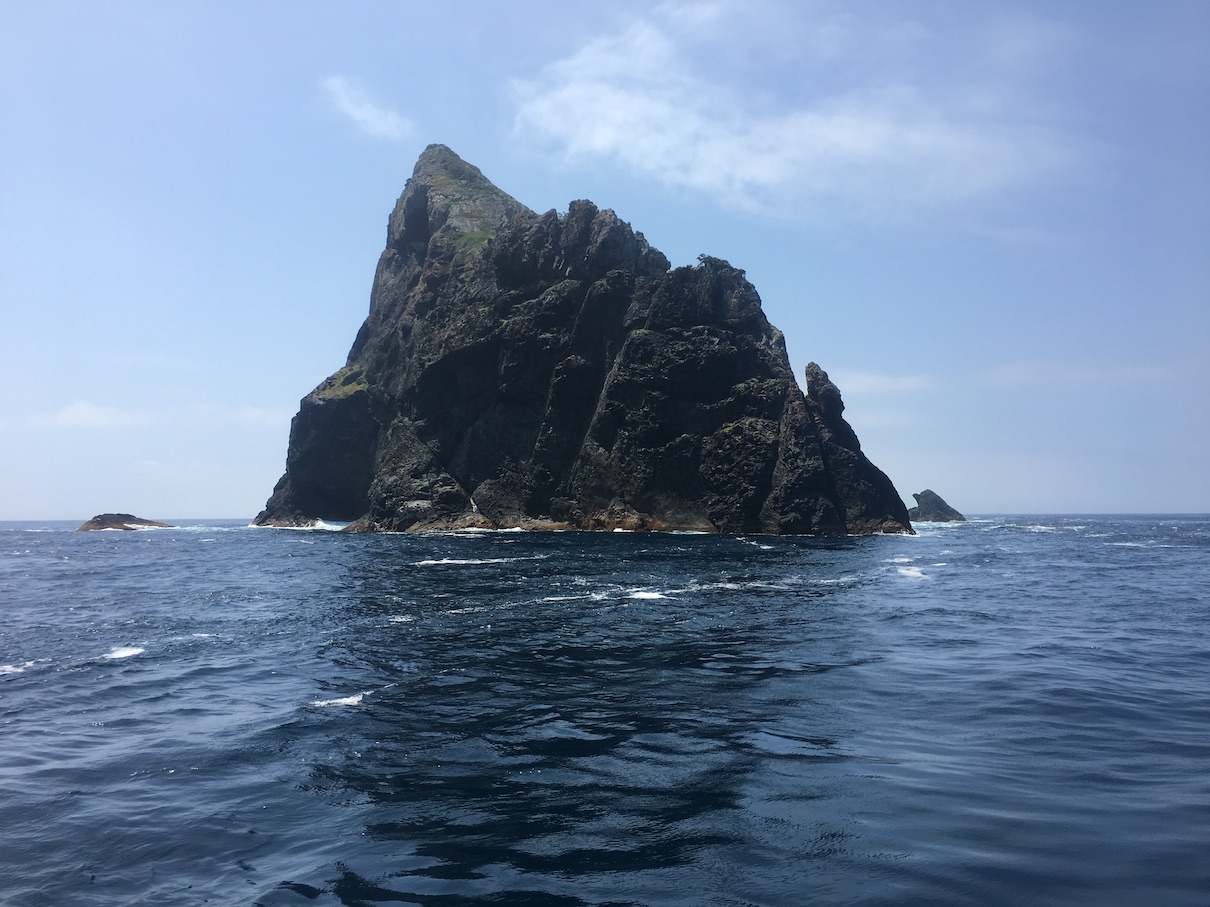 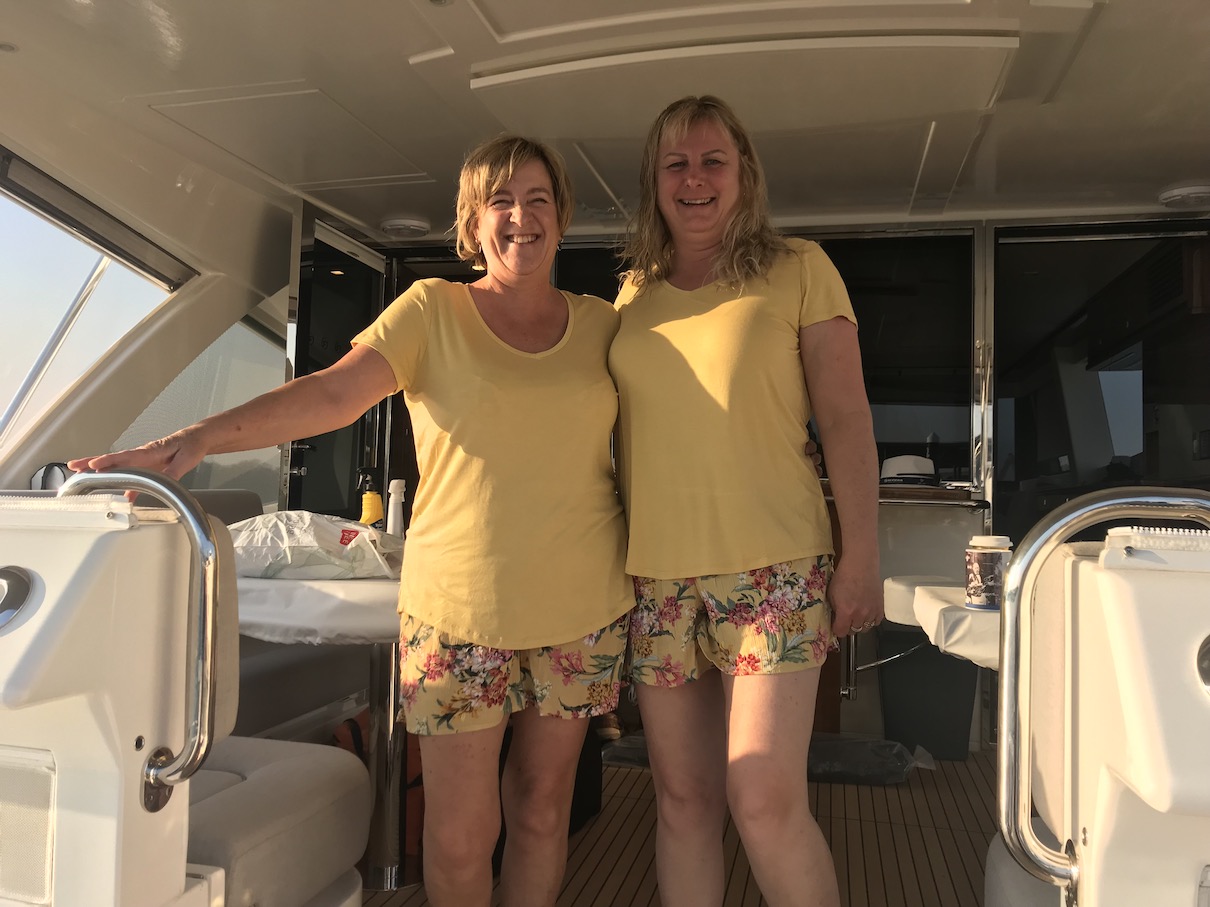 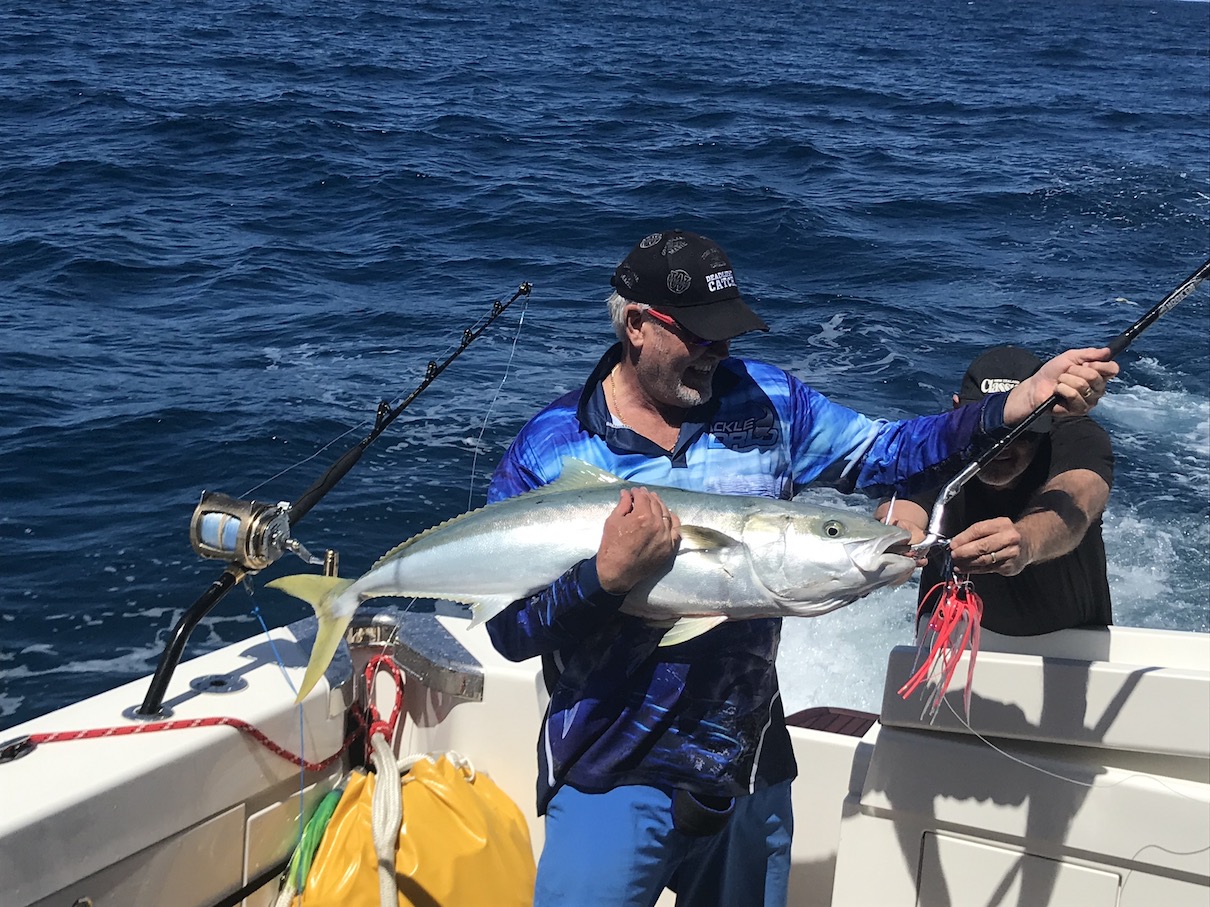 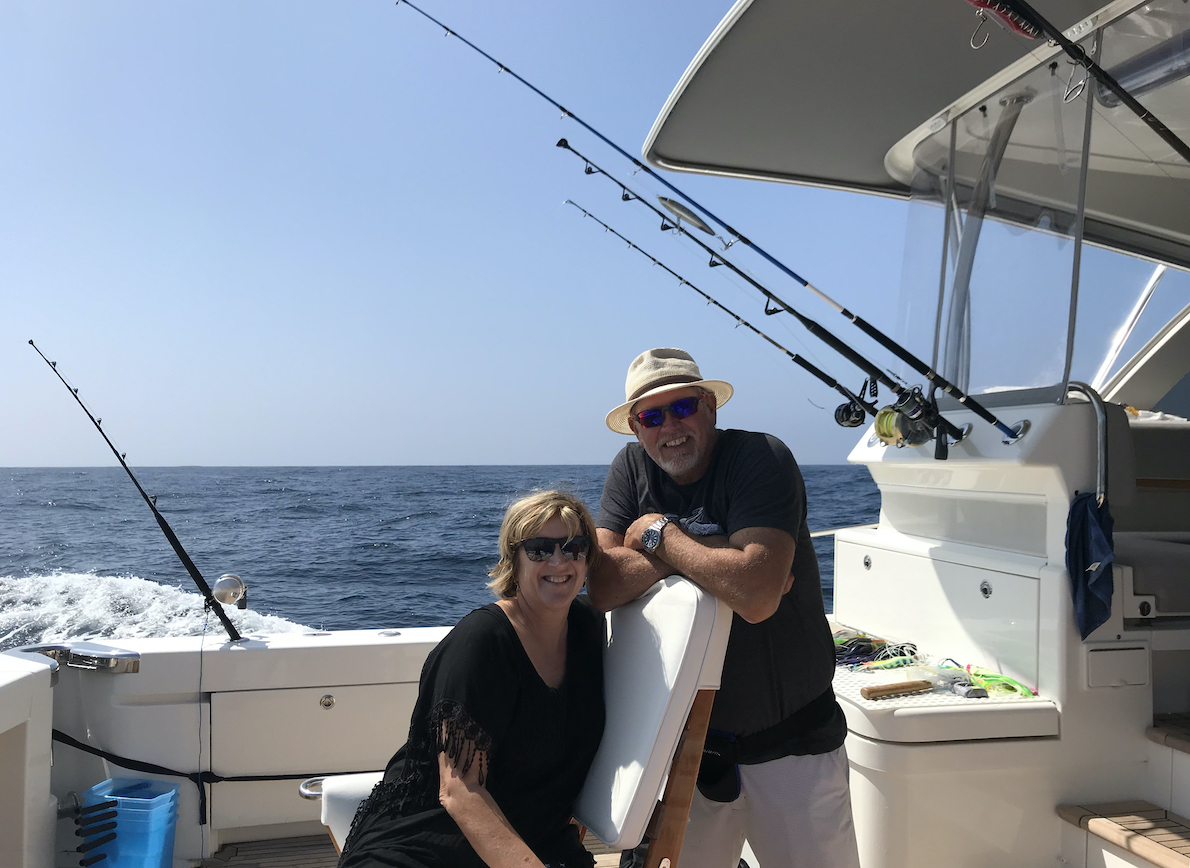 For Cheryl, a key criterion was to be able to run the boat alone with Joe, having crew only for passages. “I was a bit worried about being able to handle a boat especially as we get older. So, I was sold on the EJS joystick control – it’s so easy to manoeuvre. We had two extra stations fitted in the cockpit – port and starboard – so that coming alongside and tying up is easy with just the two of us. It’s a dream, even compared to the 61,” says Cheryl.

According to Dean, Joe’s research, combined with a marine engineering background and eight years in the merchant navy, helped him to take the significant decision to sign up then and there at the boat show. “Joe was very knowledgeable and decisive. He knew what he wanted and we worked together on a lot of customisation. It goes to show what can be achieved with passion and forethought.”

Know-how aside, it takes confidence and a certain joie de vivre to take on the Tasman with a luxury motor yacht fresh from the factory.

“It was a big decision to take a new boat and sail across the Tasman,” admits Joe. “I put a lot of effort into having it debugged.”

Cheryl with friend Tina for Tina’s maiden voyage as a deputy ‘galley rat’.
As part of their preparations, the Pengelly’s did a four-day cruise north from the Gold Coast to clock 70 engine hours before attempting the Tasman.

“I wanted to make sure I was comfortable, so one day we ran the boat in 40 knots of weather. I was blown away with the handling and it gave me all the confidence to go ahead with the trip.”

Having made prior passages through the Pacific on their first Riviera, Cheryl agrees planning is everything. “You absolutely have to be organised taking long passages. We flew in a week early and fully prepped the boat including forward cooking meals for the freezer. It’s best to make it as easy on yourself as you can.”

Our Vibe left the Gold Coast on 16 November with a crew of seven including Dean who doubled as a qualified skipper.

Their navigational strategy went beyond a straight passage. Instead, they planned a 12-day fishing expedition that timed dawn arrivals at nature’s hot spots.

“It was designed to be more than just a passage whizzing across the Tasman. We left the Gold Coast to Middleton Reef first, arranging to arrive a 6am. We did a hot lap before cruising to fish Elizabeth Reef and from there an overnight steam to Lord Howe Island arriving early in the morning again,” says Joe.

Here they refuelled. For Joe, one of the key decision-making factors was the increased fuel capacity of the latest 72 Sports Motor Yacht. Joe elected to have long-range tanks totalling 10,500 litres.

“Actually, the boat performed beyond my expectation. Its fuel efficiency is remarkable. For example, the Riviera 61 at 8.5 knots burned over 40 litres an hour; the Riviera 72 at 8 knots burns around 25 litres an hour. So, it’s almost 50 per cent less, which is unbelievable. That’s the combination of the new hull design and the increased waterline length. Also, the MAN engines, it’s a much more modern engine.

“We covered 1,700 nautical miles in the trip, including three-and-a-half days of fishing and used around 10,000 litres. We could have made it across the Tasman without refuelling, but did anyway for insurance purposes.” 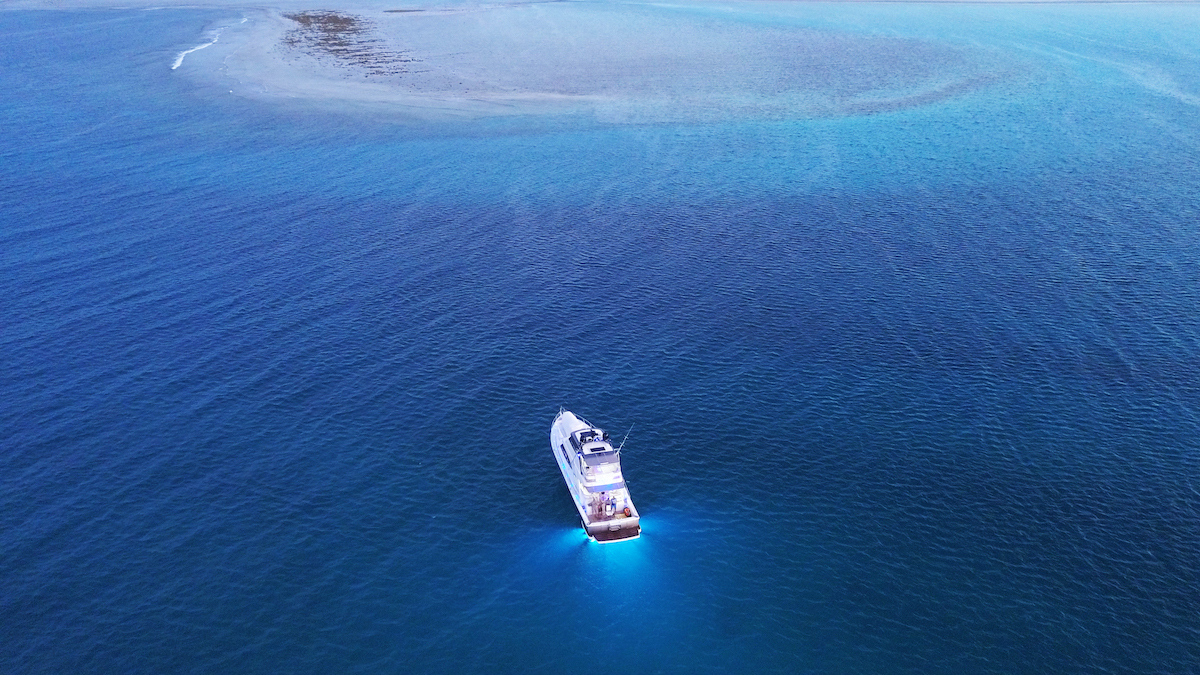 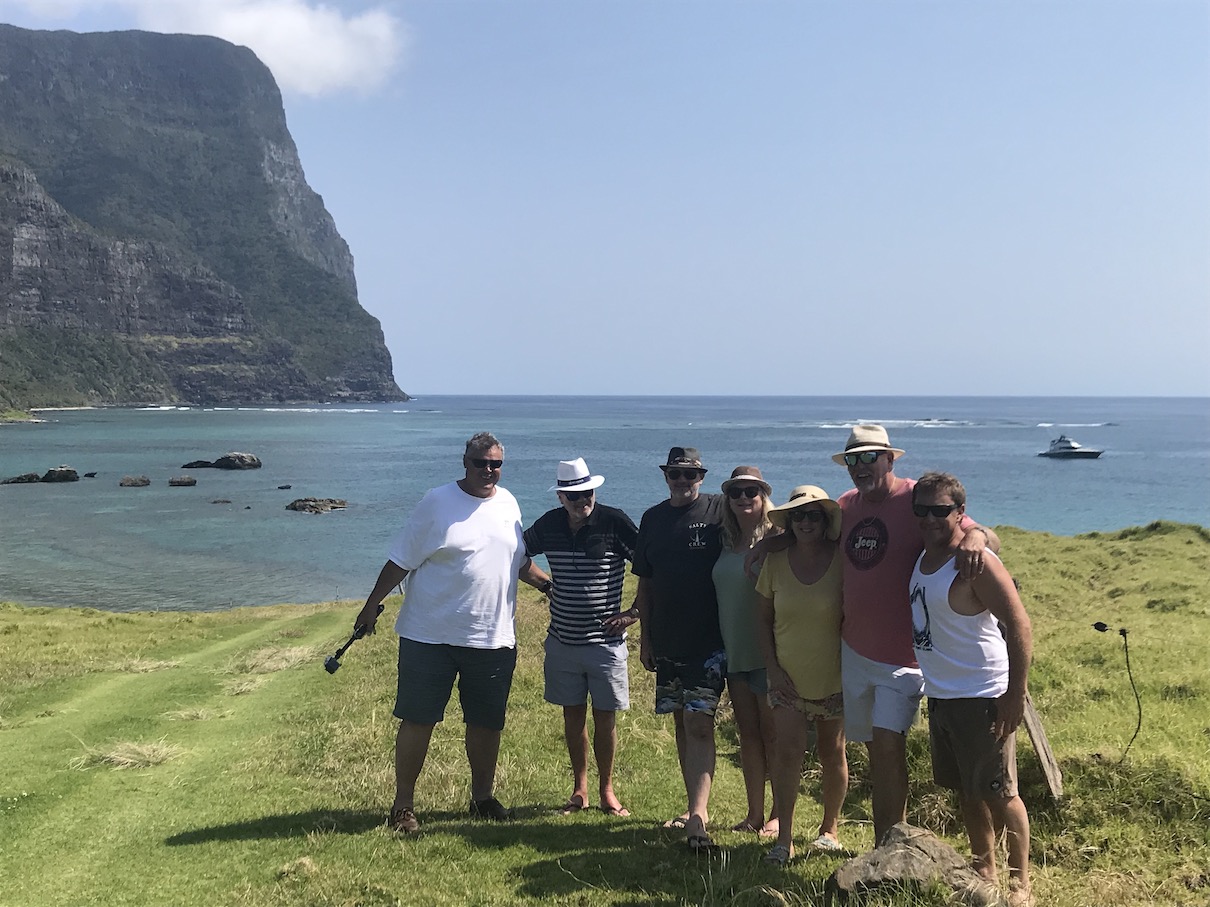 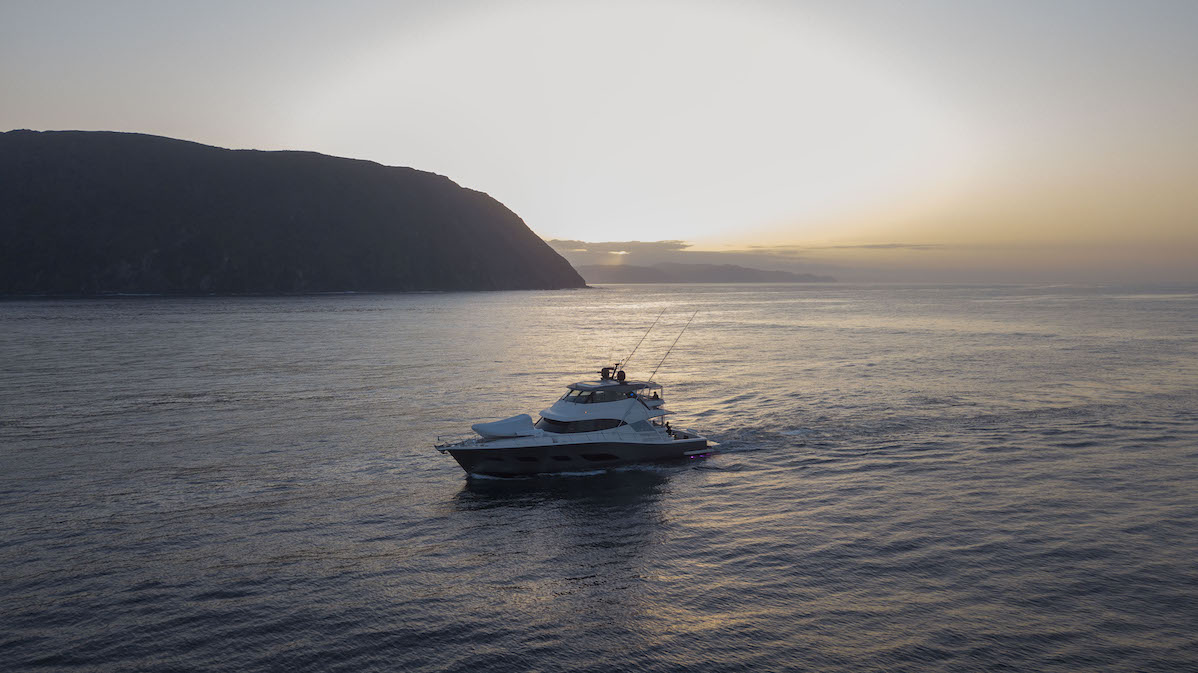 Joe, who was raised in a Cornish fishing village, says extending the waterline length works to increase efficiency. “It’s naval architecture. On entry, the hull is finer, sharper in the bow. It slices through the water and is a much smoother ride. As you come aft, she has shaft tunnels that also seem to improve efficiency.”

In fact, the Riviera hull has been designed in partnership with Dutch naval architects, Mulder Design, and has been extensively tank-tested for offshore performance.

“It’s the best Riviera hull ever made to date,” attests Joe.

Southwest of Lord Howe, Our Vibe cut another lap around Ball’s Pyramid, named after the British commander who reported discovering it in 1788. A volcanic remnant, the rocky structure juts sharply out of the ocean 562 metres high, making it the tallest volcanic stack on earth. “A wonder of the world,” says Cheryl.

The high point of the trip though came another 450 nautical miles southeast of Lord Howe at the legendary Wanganella Banks: a series of underwater pinnacles spread over a 100 nautical mile area.
“The banks come up out of the ocean from about 2,000 metres to about 100 metres from the surface so there’s a huge upwelling of food and a great concentration of pelagic species. We landed three yellow-fin tuna, and busted off two monster ones,” says Joe.

More than just whizzing across the Tasman, the crew took 12 days to fish their way to NZ.

Cheryl’s baked lasagnes remained in the freezer on these days. “We didn’t have any particularly bad weather but we did have three-and-a-half-meter beam seas around the Wanganellas. Still we could enclose the alfresco areas with clears so we were completely weatherproof and comfy. We had all our meals out there,” says Cheryl.

A key customisation Joe insisted on was constructing Our Vibe with fin stabilisation. “The handling of the boat with the fins was just superior and even in that sea there were no real rolling issues. It’s an electrically-driven fin system produced by Humphrey – all computer-controlled in conjunction with trim tabs. The factory also accommodated me by including Furuno Electronics.”

Their last stop was Three Kings Islands just northwest of Cape Reinga, New Zealand. They landed a kingfish, two hapuka (grouper) and lost one to a giant mako shark.

“It left the head of the fish dangling on the line. It was frightening, over 15 feet long. Of all our fishing days, this one was the most full-on.”

Today back in their homeport of Auckland, Joe says they’ll be off again to the Wanganella’s in May, perhaps on the way to New Caledonia. Cheryl is bemused. “That’s the first I’ve heard of that. I thought we were going to Norfolk Island!”

Joe laughs. “As long as we have our health our plan is keep cruising offshore once a year. And wherever we go, we’ve got plenty of space on the boat for the five grandkids our two children have kindly produced.”