Leonardo da Vinci said, simplicity is the ultimate sophistication. In this case, the collaboration between the two Italian icons, Riva and Ferrari, which resulted in the new Riva 50 Metri Race, is the epitome of timeless style and elegance.

The story behind the flagship of the Riva Superyachts Division, the Riva 50 Metri Race, is the tale of two Italian icons. Riva, who propelled the launch as a vehicle for glamour with the Carlo Riva-designed Aquarama, and Ferrari, the name that conjures up visions of any number of beautiful cars, not to mention The Drake – Enzo Ferrari himself. Indeed, there can be no doubt: with products that are innovative, fast and just plain beautiful, these two brands represent the best of Italian style, creativity and ingenuity.

Developed by the Ferretti Group’s Strategic Product Committee in collaboration with Officina Italian Design, Race is the first in a series of Riva superyachts that will include models from 50–90 metres in length overall.

Mauro Micheli, co-founder of Officina Italian Design with Sergio Beretta, explains: “The Riva Superyachts Division will produce two different series built on the same platform. The first draws inspiration from the larger yachts created by Carlo Riva in the early 1970s, and the second features a strong, distinctive character that will nevertheless convey Riva’s style.”

Officina Italiana Design will pen both the interiors and exteriors of the entire fleet and the yachts will be built at the Ferretti Group’s superyacht yard in Ancona, Italy. By using a pre-engineered platform, Riva can deliver the yachts with fully customised interiors in just two to three years. 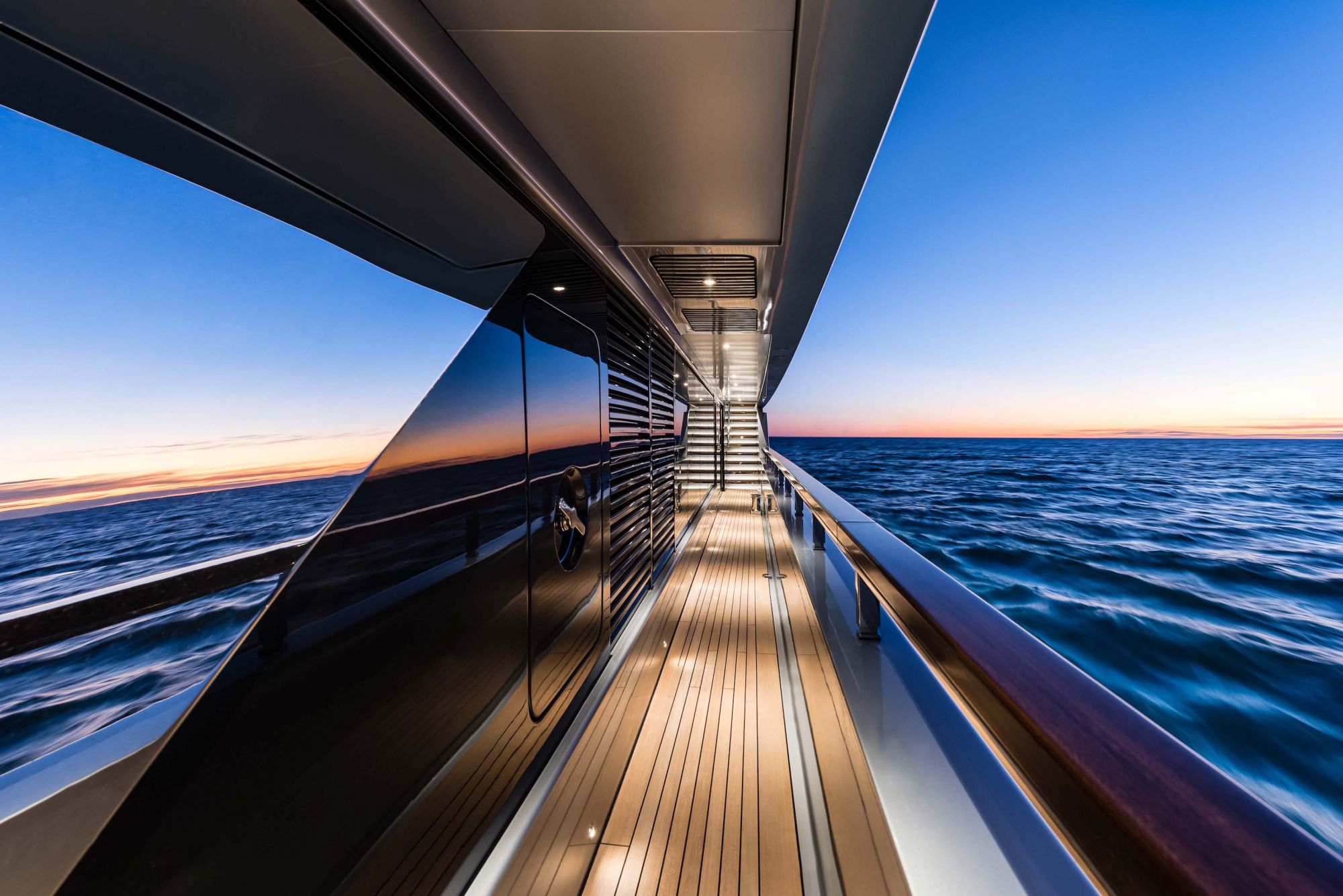 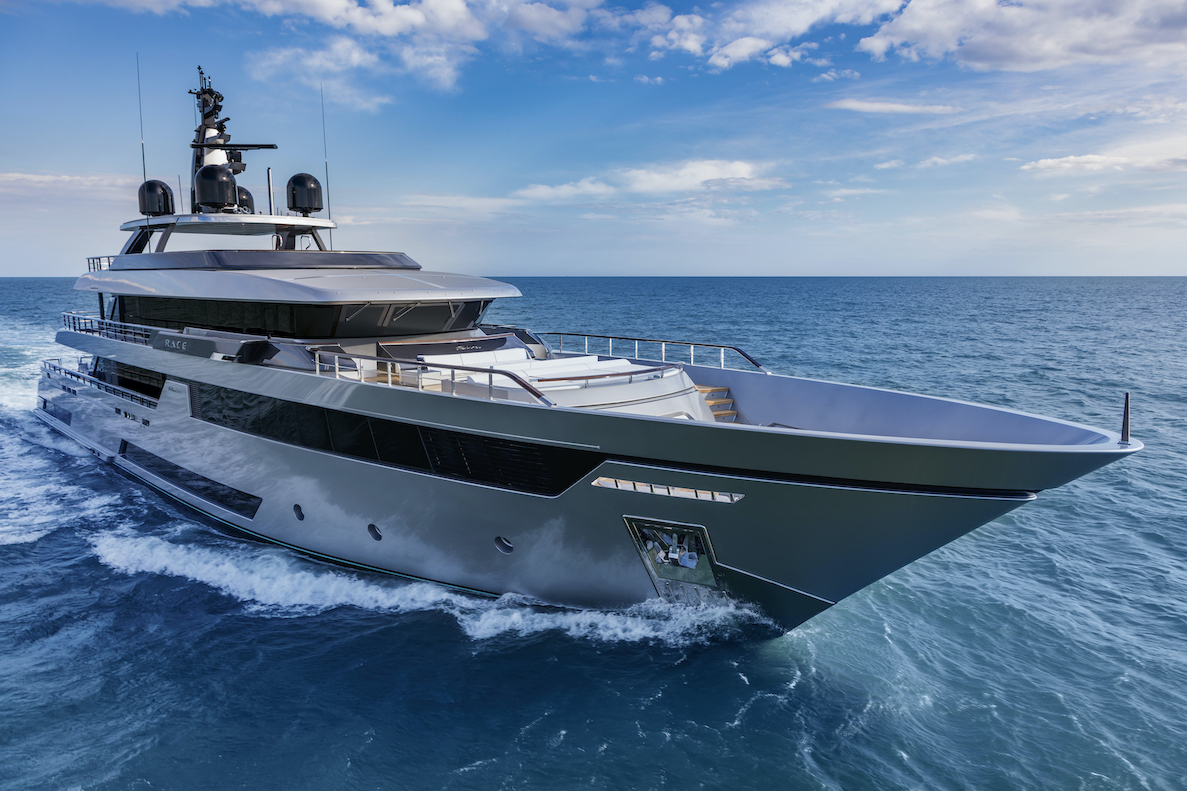 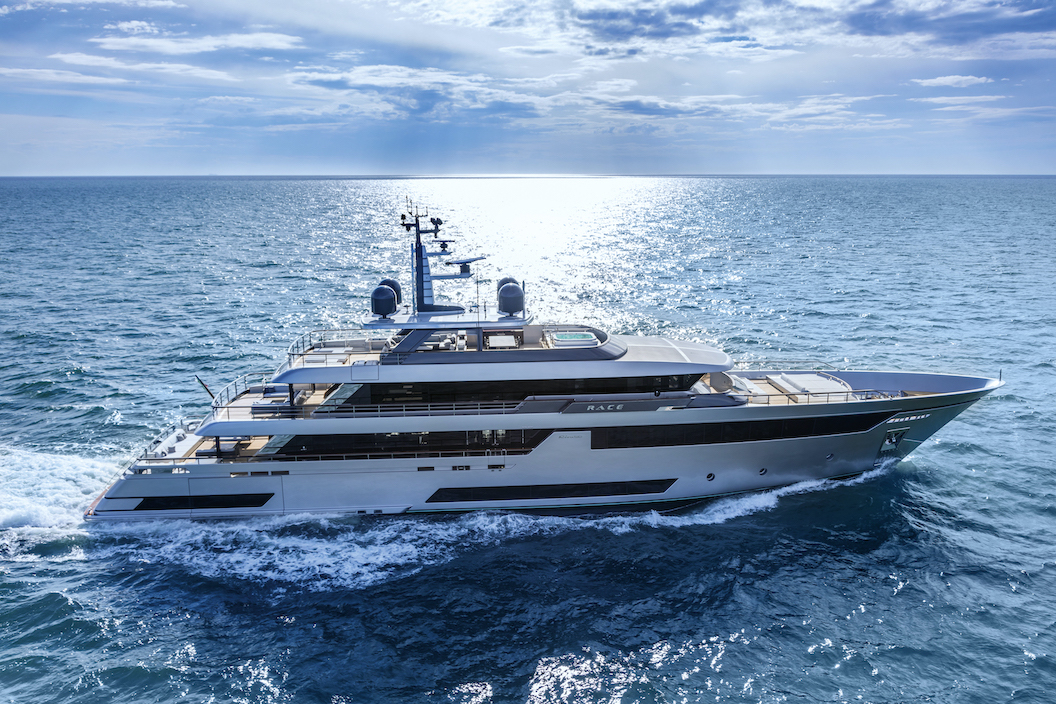 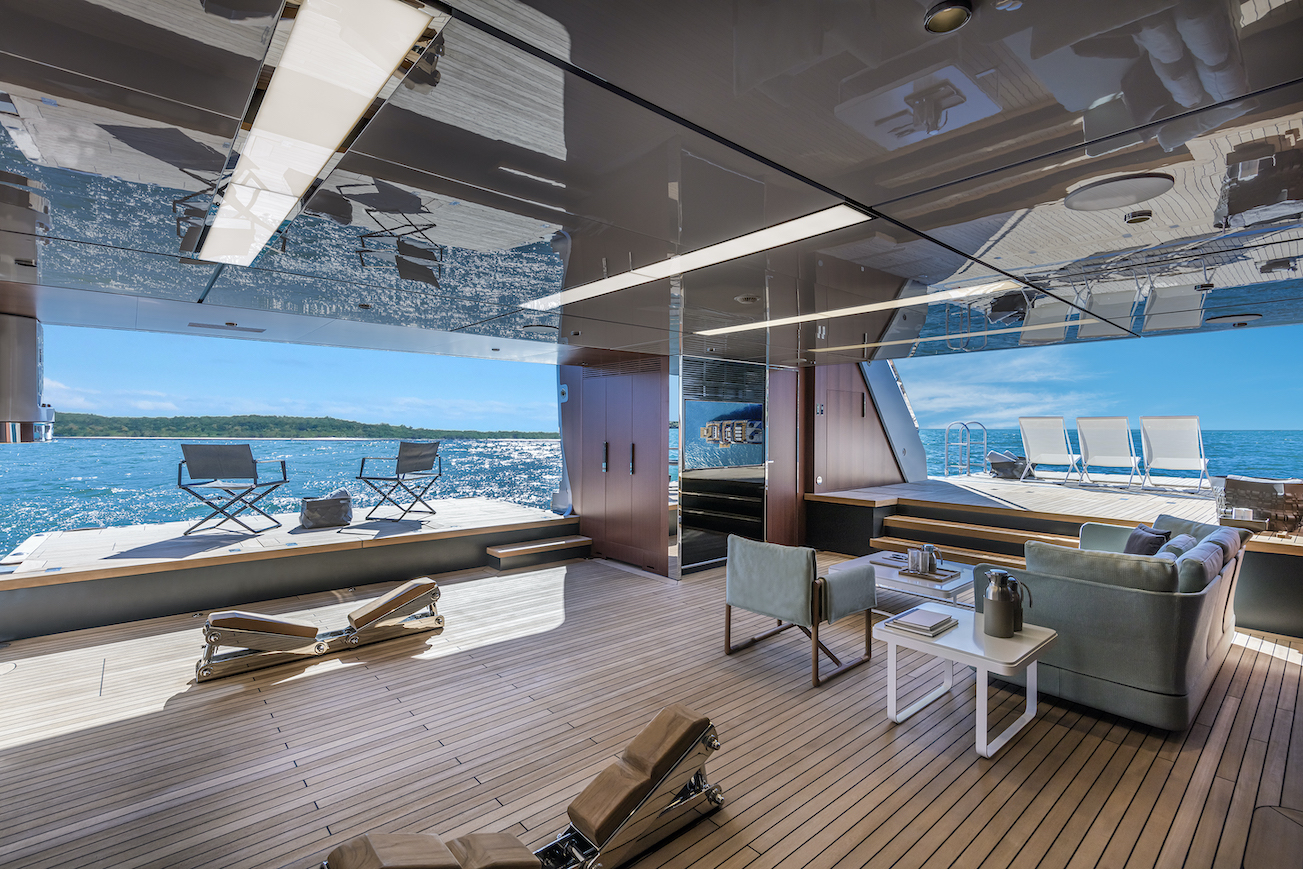 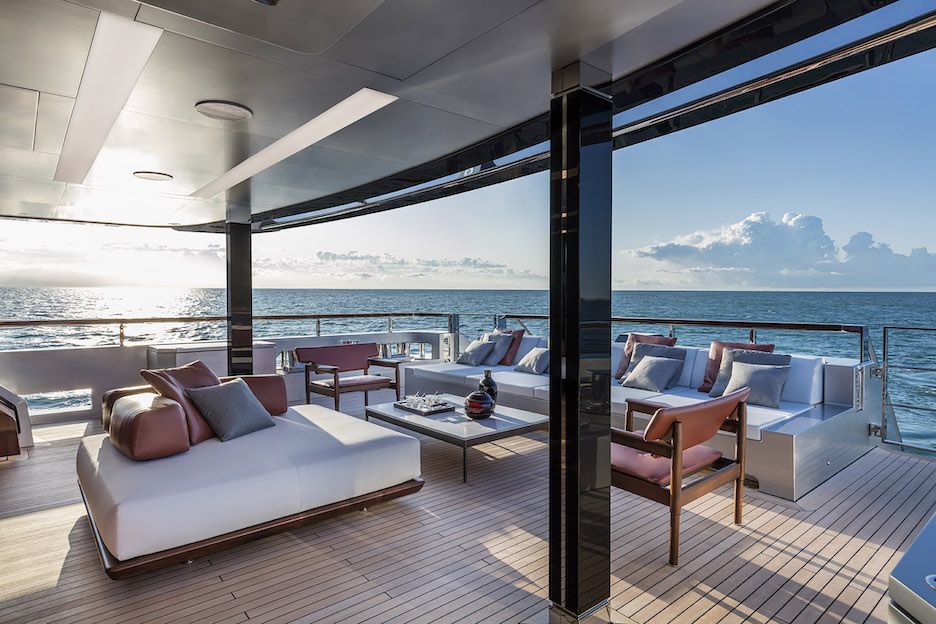 The excitement at Riva and parent company the Ferretti Group is almost tangible. Ferretti Group Chief Executive Alberto Galassi describes the Riva 50 Metri as “a huge leap forward that would have been a dream come true for the late Carlo Riva. Race represents a remarkable achievement for the Riva Superyachts Division, which has built their flagship with the brand’s signature style.”

The Group’s Chief Commercial Officer Stefano de Vivo adds: “Riva 50 Metri is the yacht that brings the excellence and the heritage of the iconic Riva style into a new dimension – literally.

“The 50-metre Riva offers a superlative experience, applying the brand’s style to a larger hull and offering custom layouts and interiors. It perfectly represents the sense of simplicity that the industry is starting to miss: clean and elegant lines that take inspiration from pure aesthetics define its profile.

“At the same time, a wealth of detail pays homage to the myth of Riva. For example, steel and mahogany are dominant, which are consistent with the Riva tradition. The skilful use of steel, the highest quality finishes and the meticulous details plus a balanced mix of grey tones and mahogany hark back to Riva’s timeless elegance that matches the most innovative and contemporary design solutions.

“The nautical market is becoming more and more demanding and requires a tailor-made offer,” continues de Vivo. “The added value of this yacht is the possibility of entirely customising the outfitting and interior decor to create a product built specifically around the owner’s requests.”

Vintage inspiration
While the Aquarama was and still is so popular that its image has almost overshadowed the larger yachts that Riva has designed – series like the Caravelle, the Atlantic and the Marco Polo – the vintage Riva that seems to have most inspiredthe designers at Officina Italiana Design is Carlo Riva’s own yacht, Vespucci.

Both Vespucci and the Riva 50 Metri have a strong reverse rake to the bridge windshield that echoes the angle of the bow, giving the yachts an air of resolute speediness.

In a strange twist of fate, the 30.5-metre Vespucci was built in the 1970s at CRN – today, both CRN and Riva are owned by the Ferretti Group and the Riva Superyachts Division builds at CRN’s premises.

But don’t expect a nostalgia trip aboard Race: the windscreen angle and a turquoise racing stripe at the waterline are the extent of the vintage touch. The new Riva 50 is thoroughly modern yacht.

The name Race is the tip-off to the link to Ferrari – it’s the ticker name for Ferrari stock – and in fact, the yacht’s owner is more than a shareholder in Ferrari. He’s Enzo Ferrari’s son, Piero.

Ferrari is also a shareholder in Riva’s parent company, the Ferretti Group, so it’s only logical that he should commission the first hull built by Riva’s new Superyachts Division and name it in a way that honours the company his father founded.

Race, the Ferrari Riva, has a steel hull and aluminium superstructure.

Ferrari took advantage of the semi-custom aspect of the Riva 50 Metri offering to have the interiors designed and configured to his taste and needs.

Boarding from the stern, symmetrical staircases lead up to a large aft cockpit furnished with a banquet and loose furniture that has a pared-down, mid-century modern vibe. Teak armchairs have tobacco leather upholstery and the couches are simple with natural canvas and leather cushions. Mahogany – the wood of Riva runabouts – tops the rails. Branding is discrete but present with elements such as the horn bollard cleats topped with the Riva logo.

The glass doors to the main saloon slide open wide to maximise the indoor–outdoor connection. “The owner was involved in the design and construction process, contributing to the work of Officina Italiana Design and the Riva Superyacht Division Engineers and choosing his perfect layout, outfitting and interior decor,” explains de Vivo. “For example, he wanted to have an immersive view of the sea with continuity toward the outside, so he requested that the access doors to the main saloon can be opened entirely. To minimise the visual obstacles onto the sea, the main saloon has very high windows and two more sliding side doors.”

Underneath the yacht’s luxurious finishes, there are core structures in Nomex that optimise weight and temperature resistance. The lighting system – the warmth and brightness of which can be adjusted via a Lutron automation system – is custom.

The saloon is a large open space with walls and ceilings that are almost completely lined with slated mahogany. The wood contrasts with white and grey carpeting framed by pure white marble used on the floors. The living area is furnished with a white leather sectional sofa arranged around a coffee table in polished steel and strongly veined Statuarietto marble. 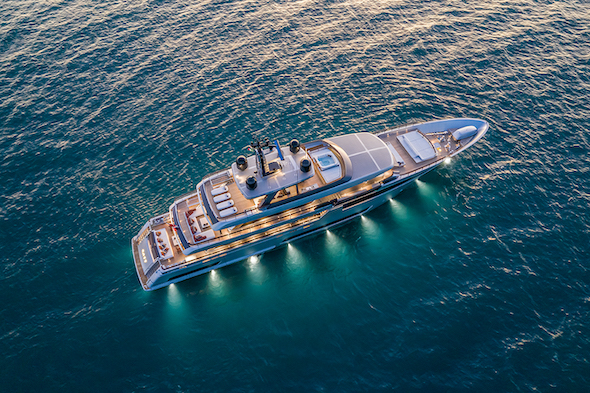 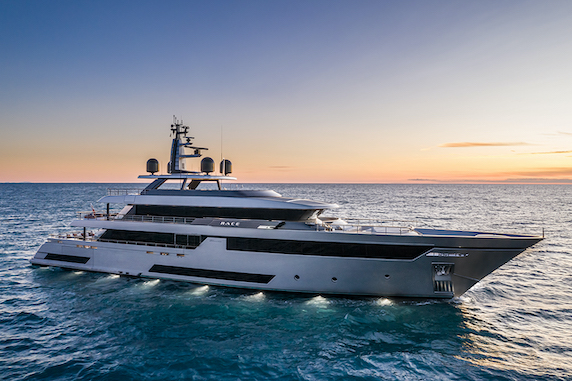 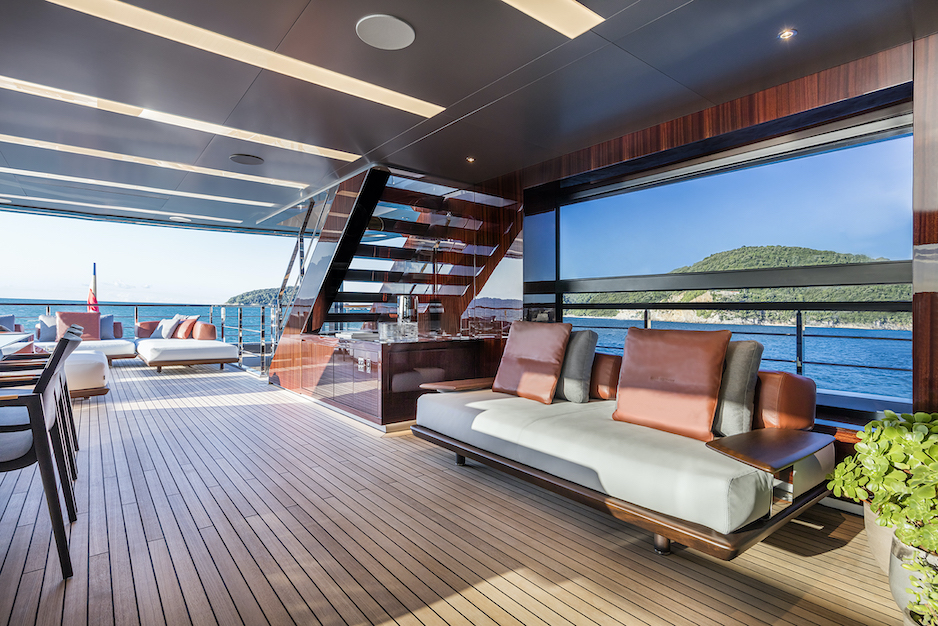 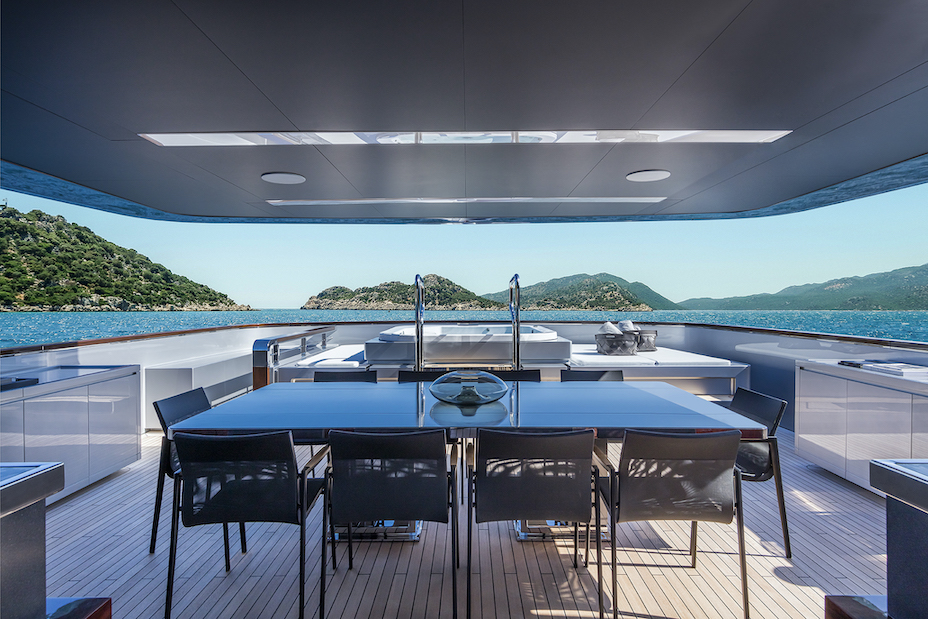 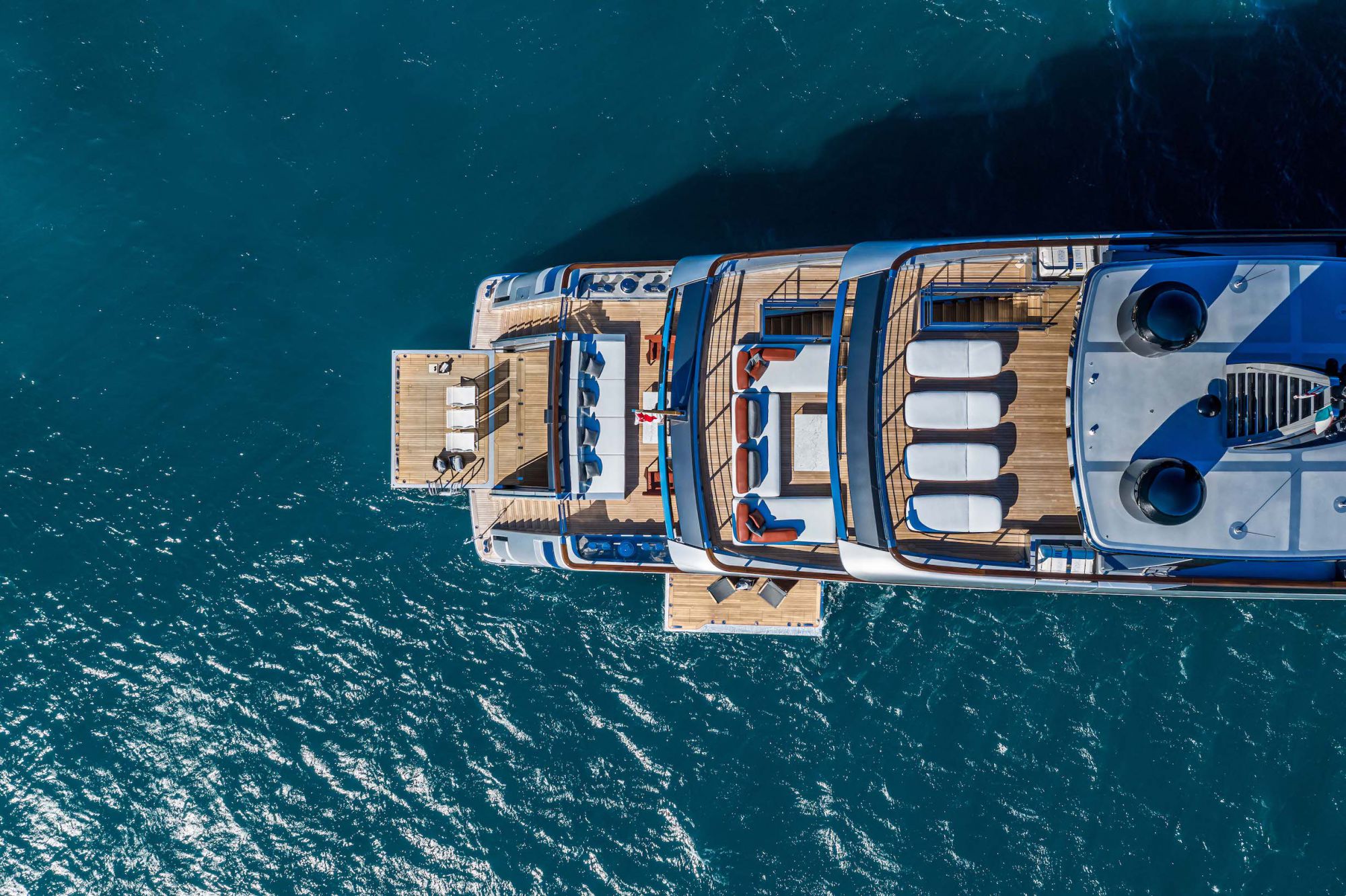 An unvaried combination of white, grey and rust tones is used throughout the yacht. Furnishings are all similar and materials such as mahogany, marble and steel are constant, giving the yacht’s interiors a strong sense of continuity.

A low mahogany sideboard separates the living and the dining areas while leaving the fore to aft sight lines clear. With the ceiling and walls lined in slated mahogany and the support columns lined in leather, the area has a masculine, club-like feel.

Symmetrical doors open onto the side passages letting light and breeze flow freely around the space that is furnished with a glass-topped table surrounded by comfortable black leather side chairs with arms. Symmetrical mirrored doors lead on one side to a service pantry and on the other to the lobby, which has a polished steel staircase that seems suspended in mid-air. Everything in this space – and on the entire yacht – is high spec, high gloss and superbly crafted.

Ferrari’s full-beam owner’s suite forward on the main deck measures over 70 square metres and he had the layout customised to include a private study and a separate media room. The owner’s taste tends toward minimalism, as de Vivo confirms. “Here,” he says, “grey tones alternate with mahogany, and steel is elegantly combined with leather and marble. Each material is matched to the others with artistry, allowing the essential beauty of the details to emerge.”

Furnished with couches and a television, the media room can also be used as a cabin since it has a closet and ensuite. The sleeping area has a centrally placed bed and nightstands in grey leather with contrasting stitching while a wall of mirrors reflects the views from the large windows.

The master cabin’s ensuite is fully lined in strikingly veined Statuarietto marble and slated mahogany and has a luxuriously large shower and separate water closet.

Thanks to the careful attention that Riva’s engineers paid to soundproofing, the noise level in the owner’s cabin is below 40 decibels at cruising speed.

The bridge deck guest area is mostly outdoors and furnished with loose pieces so that Ferrari can enjoy flexible use of this large space. A custom U-shaped sofa lies aft and there is a Corian dining table under the overhang. This mixed indoor–outdoor space can be protected by hidden sliding panels.

Large sliding glass doors lead to the upper saloon that features a leather sectional sofa, deep and comfortable leather and steel armchairs, and a marble and polished steel coffee table.

The ensuite captain’s cabin is adjacent to the bridge, and the helm chair could have been lifted straight out of a Formula 1 racing car. “The owner asked us to implement larger side wings off the bridge,” says de Vivo. “As well as being a functional choice, it allows him to watch mooring manoeuvres comfortably.”

Outdoor spaces aboard Race are large and spectacular. The sundeck is 120 square metres and has lounge chairs for sunbathing, and a spa pool surrounded by sun pads.

The foredeck is accessible from the port side passage where a large sun pad with adjustable back rests conceals an access hatch to the rescue boat and water toys. Further forward is storage for a jet ski that can be launched by using a hidden davit.

The stern garage has room to house a Williams Dieseljet 625 tender that can be launched via a starboard hatch. When the tender is launched and both the hatch and the transom are open, this area becomes a large and airy beach club with easy access to the water.

In the configuration that Ferrari has chosen, the Riva 50 Metri can accommodate ten guests and nine crew. Crew areas are especially well organised. The captain’s cabin is on the upper deck while the rest of the crew quarters and mess, and the galley, are forward on the lower deck with a dumb waiter running to all decks.

A cold room and storage are forward of the galley and the tank deck houses the onboard systems and the laundry room.

There is easy access to the engine room from the aft deck and the crew has dedicated pathways so that their working day doesn’t interfere with the owner’s and guests’ vacation time.

At just under 500 GT, the Riva 50 has all the comfort, style and class you would expect from the union of two Italian icons – and she will soon be joined by a sister. “The second unit of the 50 Metri series is currently in build in Ancona,” de Vivo explains, “and will be launched within the year.”
If Piero Ferrari finds that he has to outdo himself to remain the icon of icons, he at least has three more models of yachts from the Riva Superyacht Division to choose from – although Race will be hard to beat.

Interiors were not published in this review at the request of the owner.

For the full story you can view the magazine online for free here.

Investing in the future

Investing in the future