The sleek, new Maritimo S70 sedan cruiser, which is the largest single level vessel the company has ever produced will have its international debut at the 50th Sydney International Boat Show.

Boasting a top speed of almost 30 knots and with handling the equivalent of a large runabout the S70 is luxury, style and performance personified.

The first S70 has been delivered to its New Zealand based owners and Maritimo expects the model will be a strong sales performer, particularly in European markets.

The vessel will spend the next twelve months cruising Australian and South Pacific waters before heading to its home base in New Zealand.

Maritimo’s International Sales and Marketing Manager, Greg Haines, said the beamy vessel has plentiful entertaining and living space and being single level it provides additional height in the main cabin with almost two metres of headroom.

The first S70 weighs in at approximately 48 tons and is powered by Scania D16 -1150HP motors. It has a range of 520 nautical miles and 21 knots and a staggering 1600 nautical miles at nine knots. 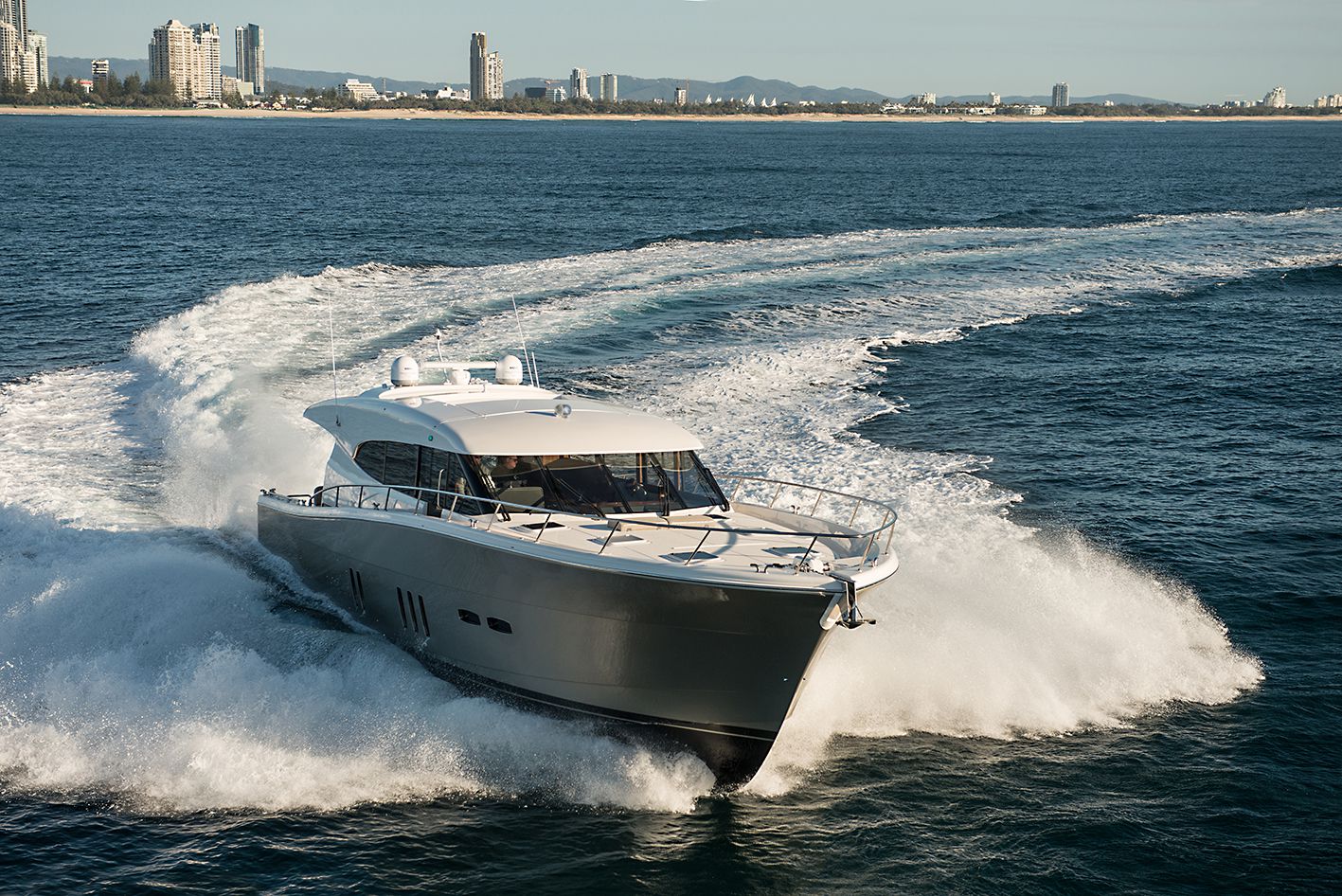 The sleek new vessel is the largest single level model built by Maritimo. 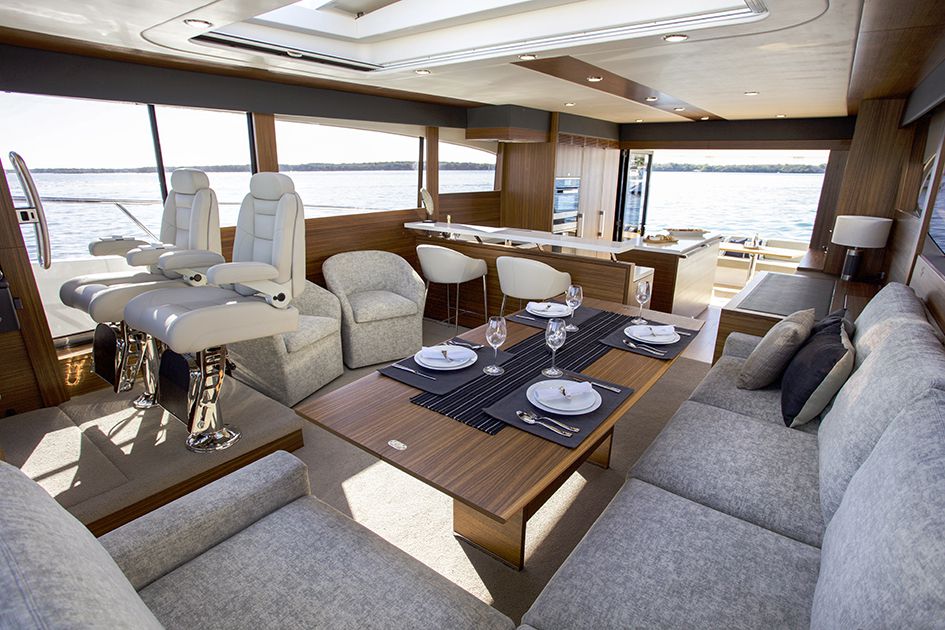 The saloon is spacious, with plenty of headroom. 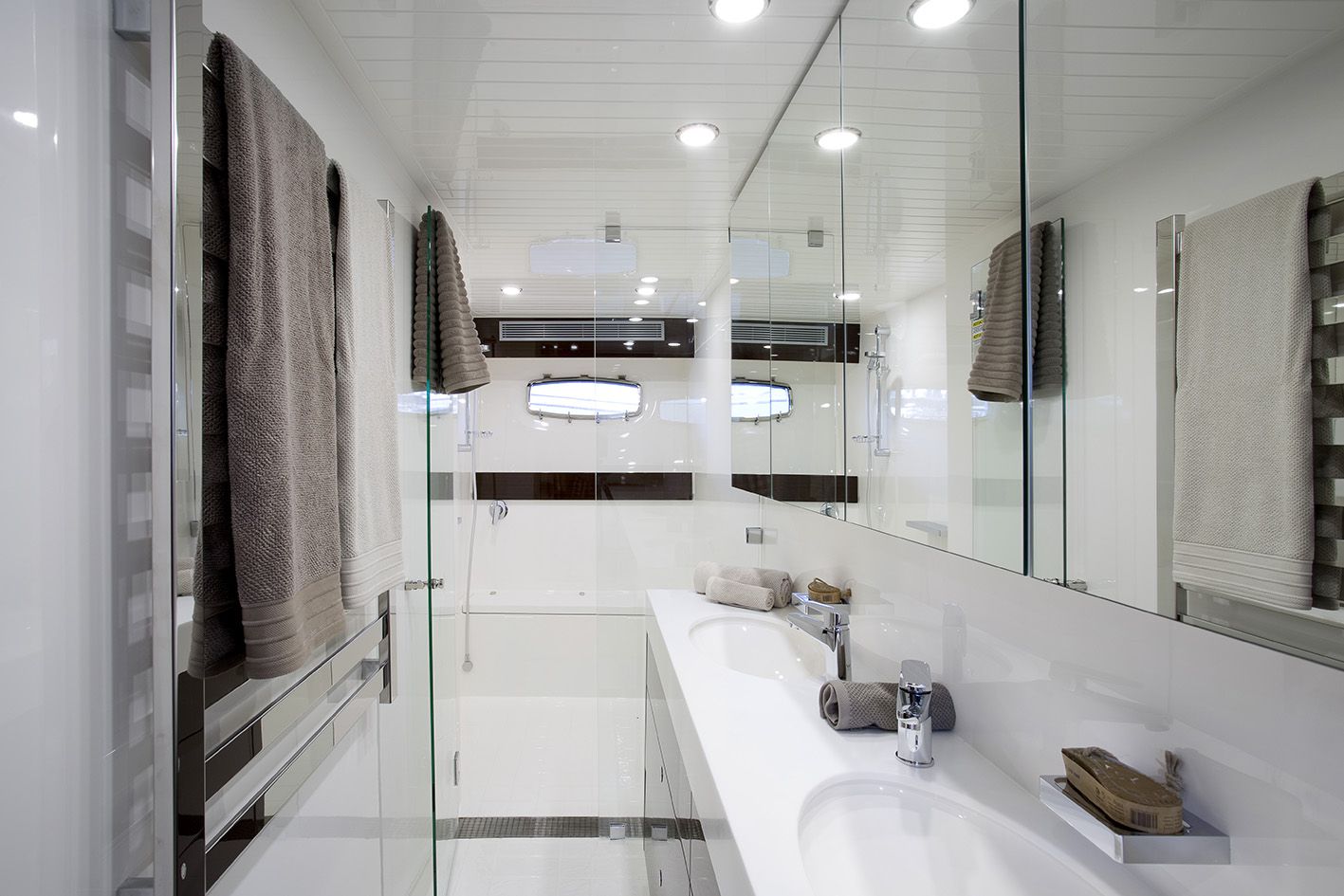 Haines said the vessel has been highly customised by its owner and features satin dark teak timbers throughout.

“The galley is something to be seen with the timbers selected and it features Miele appliances,” he said.

“The vessel has a painted hull in a champagne-gold colour and it also has a Seakeeper gyro and ZF joystick with I- Anchor technology.

“It features an extra large sunroof and has a hydraulic swim platform for tender storage.

“We think this vessel will have broad appeal not only to Australian buyers, but particularly in Europe.”

Haines said in sea trials skippering of the S70 was enhanced by 360 degree sight lines and the boat’s runabout style performance. “For a boat of its size with the two and a half turn lock to lock Maritimo steerage system it is particularly nimble,” said Haines.

“She not only looks stunning, but she performs brilliantly.”

The S70 evolved after its owner travelled the world studying a variety of brands at international boat shows look at options for his dream boat.

The New Zealand businessman, who is nearing retirement, was originally leaning towards a large displacement cruiser in the Nordhaven or Flemming style and even considered building a one-off boat to his specification in New Zealand.

“After years of sailing our own yacht we decided that as we entered the retirement phase of our lives we were more interested in cruising in a launch rather than standing in the wind, on an angle to get anywhere slowly,” said the businessman.

He said what surprised them in their global search was that the brands of boats they preferred for the New Zealand environment were Australian build vessels.

He said they ‘fell in love with’ the Maritimo M70 flybridge cruising motor yacht and after sea trials in large seas off the Gold Coast they were convinced the M70 could go anywhere they wanted on the Australian coastline, throughout the Pacific and around New Zealand.

The businessman said that he and his wife did not want a flybridge style vessel, but Maritimo were quick to offer to design and build a sport cabriolet version of the M70.

Originally presented with a design of the S70 in 3D they were sold.

Maritimo’s Australasian Sales Manager Ormonde Britton said the buyer started discussions with Maritimo’s New Zealand representatives several years back and the concept of the S70 sedan stemmed from there.

“He knew what he wanted and we kept fine tuning and adding things here and there until the eventual design surfaced and he signed-up,” he said.

“He wanted a single level boat and he wanted some serious volume so we were able to keep working on the vessel until we got exactly what he was looking for.”

Haines said the M70 had been a runaway success for the company with eleven vessels now sold to buyers throughout Australia and as further afield as New Zealand, Texas, Florida, France and Singapore.

“This is a big volume, serious passage maker and the S70 delivers all that the M70 does and more on a single level,” he said.

The vessel has four cabins, including the Maritimo hallmark a full beam apartments sized master cabin, three bathrooms and an exceptionally large saloon and helm area.

“They plan to spend twelve months cruising the South Pacific area before taking the boat to New Zealand,” said Haines.

He said with the recently released M59 and S59, the highly successful M70 and now a sedan version 70 footer Maritimo could offer the boat buying public some ‘seriously S70 for large’ bluewater passage makers in both one and two level configurations.