She is the brainchild of a passionate Southern Wind yacht owner who asked for, “a very fast yacht with the comfort and safety standards typical of a cruising yacht but versatile enough for both fast cruises with family and excellent performance in the most renowned offshore and inshore superyacht regattas,” says Willy Persico, Southern Wind founder and CEO.

After her launch in November the shipyard’s technicians, the yacht’s crew, Reichel/Pugh representatives and professional sailors all took the yacht through extensive sea trials. She sailed in light and strong wind conditions and she confirmed her potential both in terms of performance and sea-keeping.

“We used cruising sails during the sea trials and still effortlessly recorded speed in excess of 18 knots. The owner and captain were really pleased with the performance, as we were too,” stated Marco Alberti, SWS General Manager and Technical Director. 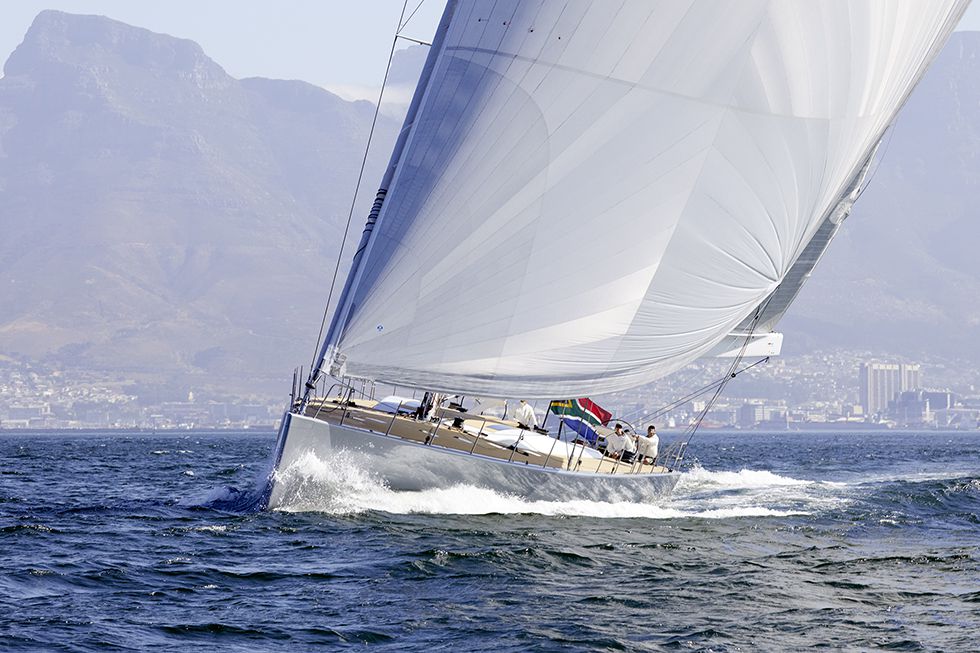 “Our goal was to create the fastest yacht that could still meet the client’s cruising requirements; to this end particular care was taken throughout the project to avoid unnecessary weight. In the hull design we developed a shape where the heeled form provides power while reaching and sailing upwind, but with a narrow upright waterline that still allows for good light air performance,” said the Reichel/Pugh Yacht Design team, responsible for the naval architecture, exterior and interior arrangement.

Marco Alberti proudly confirmed: “The devil is in the details, as the saying goes. The racing soul of the SW-RP90 forced us to push our weight saving approach without compromising on comfort and safety. The main innovations applied to the build are the use of Prepreg and Nomex for the deck and structures. The hull was infused on a single female mould with carbon fibre and epoxy resin skins over a Corecell foam core.”

A highly sophisticated computerised onboard hydraulic system was designed in conjunction with Greg Waters, one of the leading experts in hydraulic systems for VOR racing yachts.

Efficient structural arrangement of the interiors is by Reichel/Pugh, who designed a layout that eliminates the need for non-structural partitions by using the major load paths of the boat.

Nauta Design are the authors of the yacht’s interior design. Our challenge was to design interiors that were intriguing and innovative but with ergonomics that could function within the structural and dimensional constraints that the performance aspects of the yacht’s design imposed,” added Massimo Gino and Mario Pedol, founders and co-heads of Nauta Design.

The fully-custom SW-RP90 is the first launch in the new series of projects that make up the remarkable order book currently under construction at Southern Wind. The new semi-custom projects, SW96 and SW105, unveiled in Capri during the SWS 25th Anniversary Rendezvous in May 2016, have met immediate success on the superyacht market with two units sold for each series.