The significance of 1964 represents a truly defining era of evolution for both Bowmore and Aston Martin.

For Bowmore, 1964 is arguably one of the most significant points in the distillery’s 240-year history. The arrival of a new boiler saw the distillery enter the modern age of distilling as coal fires made way for steam in heating the stills.

It was the first distillation from this new boiler that produced the spirit that was to become the iconic Black Bowmore – a sublimely rich and decadent single malt, reflected in awe-inspiring deep darkness.

First distilled on 5 November 1964, over the years Black Bowmore has become one of the rarest and most sought-after single malt whiskies ever created. 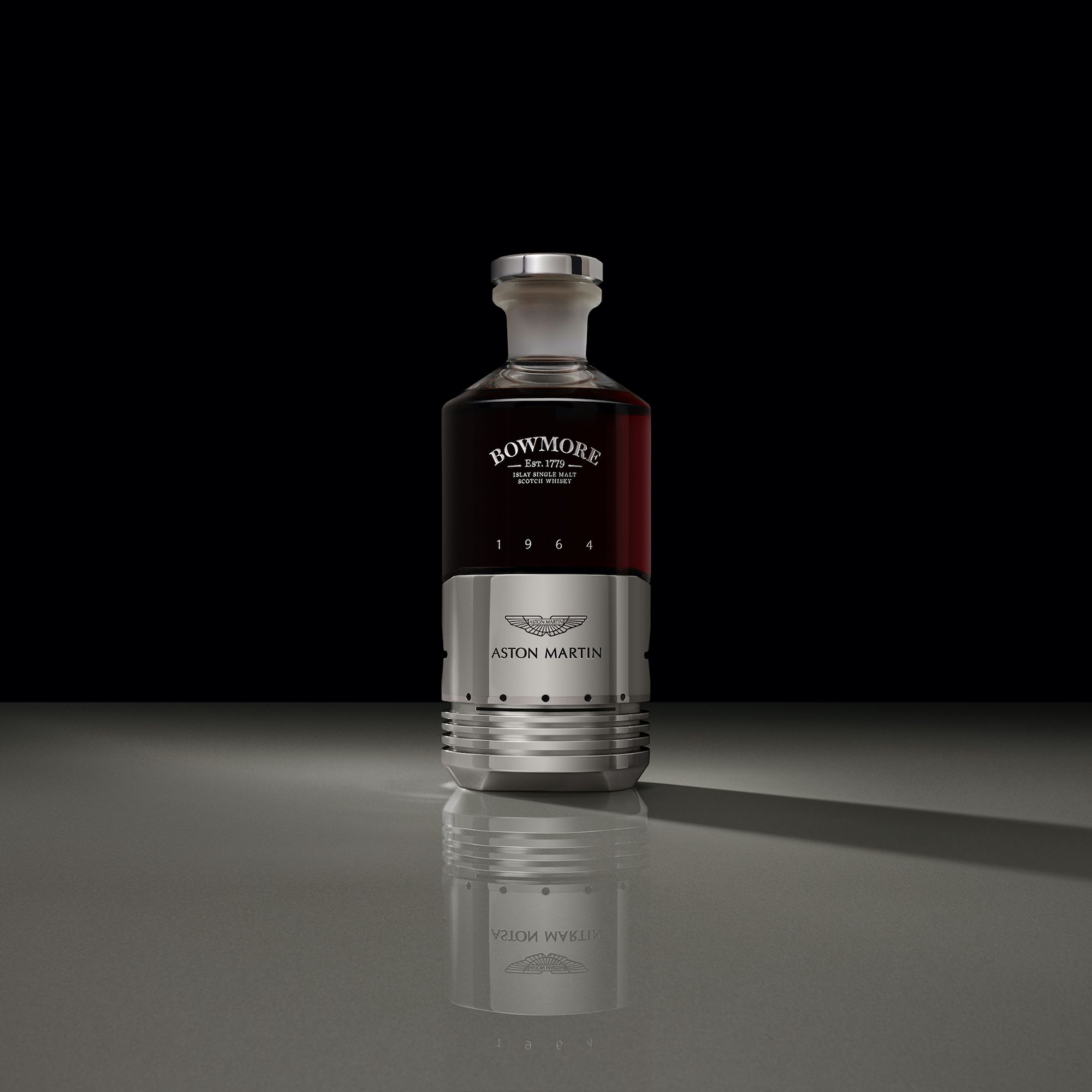 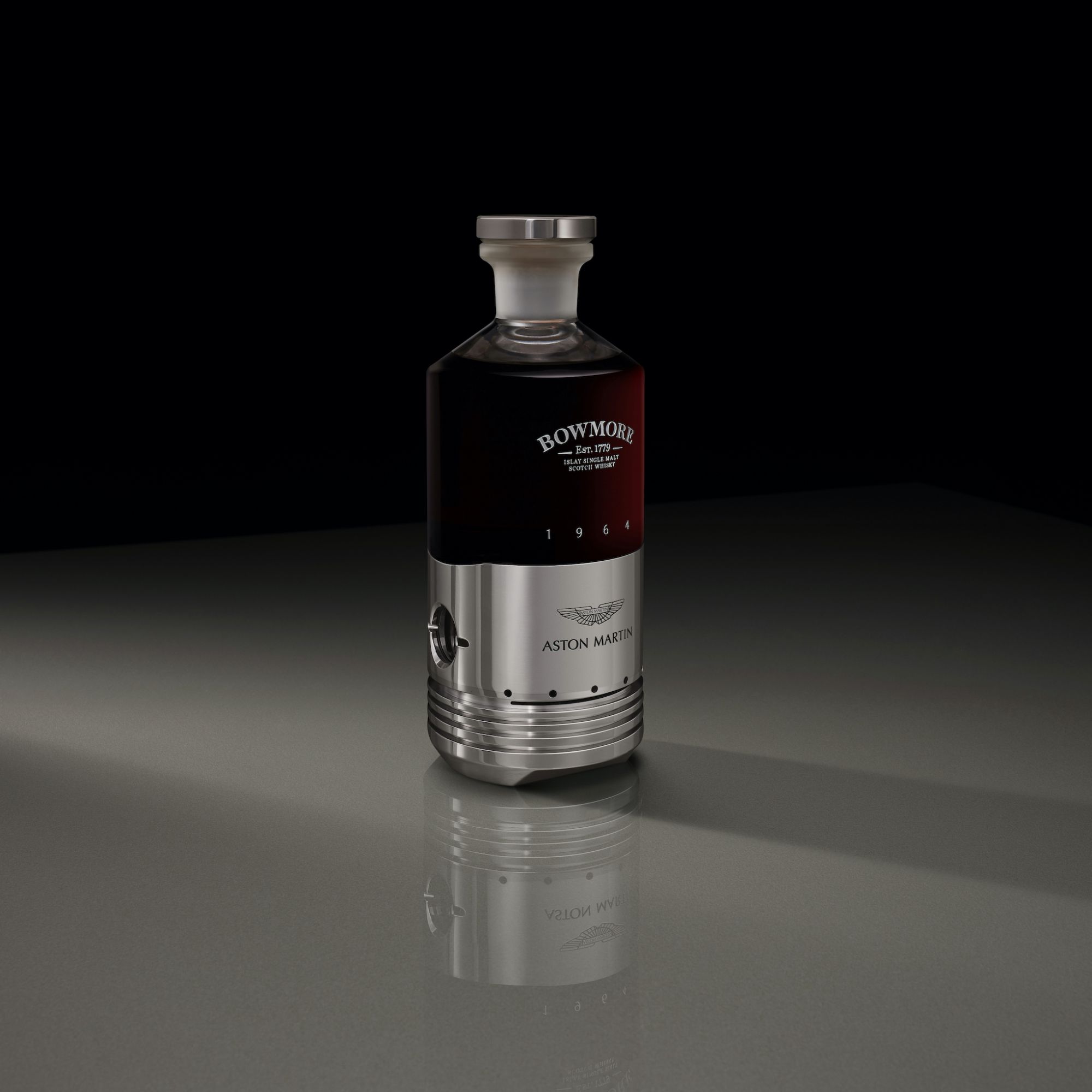 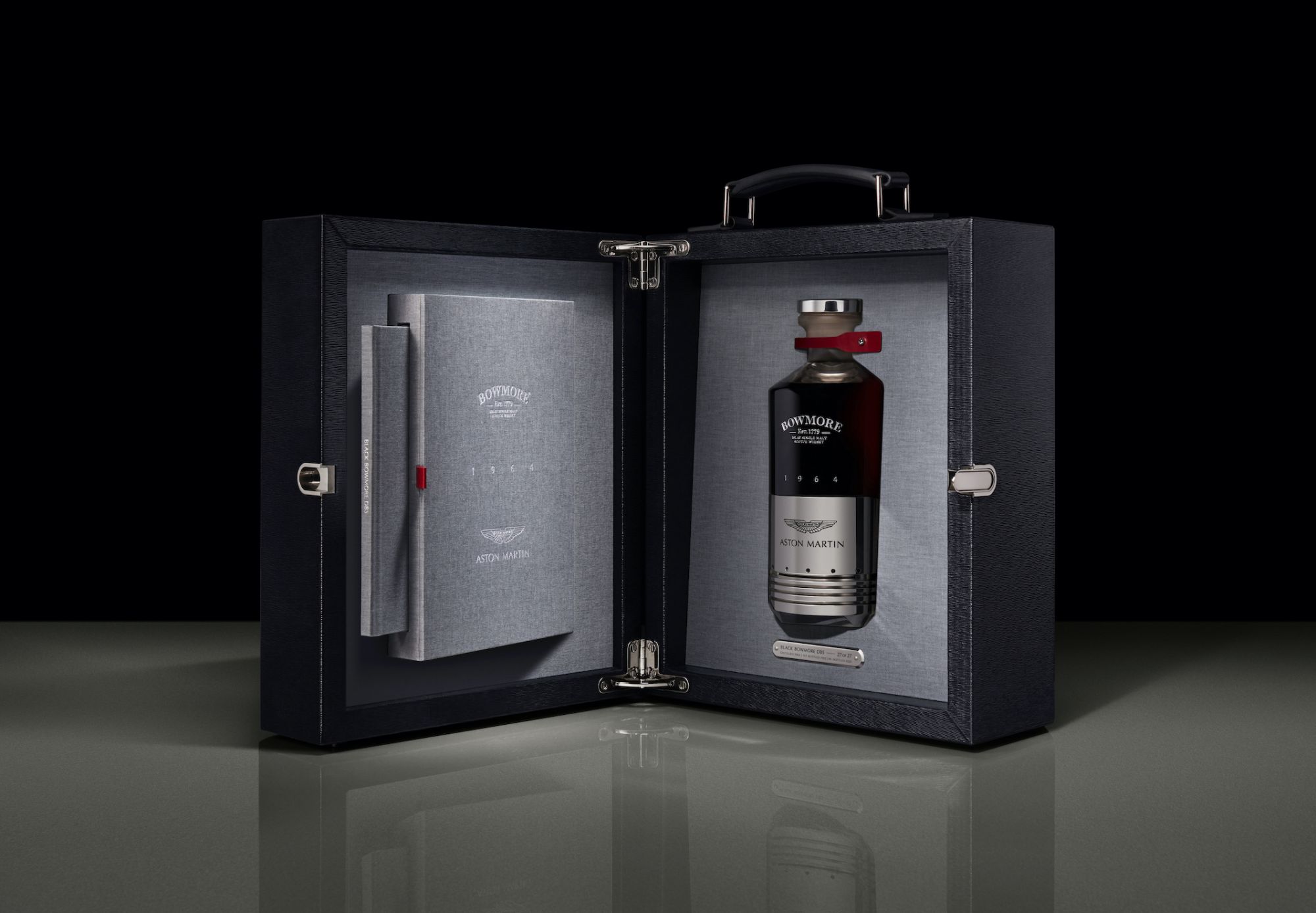 This latest release represents only the sixth bottling of this exquisite single malt. Since 1993, only around six thousand bottles of Black Bowmore have been made available, thus adding to the desirability of this iconic whisky.

David Turner, Distillery Manager at Bowmore commented, “1964 represents a significant date in the modern history of the distillery. Not only a key moment in how we distilled our spirit, but perhaps even more significant as this very spirit went on to create Black Bowmore. Such defining moments are fundamental to the history of Bowmore.

He continued, “This collaboration with Aston Martin has allowed us to once again showcase this iconic single malt in the most incredible way.”

For Aston Martin, this was the era of their most iconic car.

Launched in 1963 to considerable acclaim, the Aston Martin DB5 is now widely regarded as the most famous car in the world, not least by virtue of its links to the world’s most celebrated secret agent in 1964.

On its debut, the DB5 represented a subtle but important evolution over its immediate predecessor, the DB4 Series 5, not least by virtue of an increase in engine capacity to 4.0 litres. This, of course, made the DB5 that much more of a sporting saloon which, combined with its exceptional styling, helped it to become one of the most desirable and admired sports cars of its generation.

Sir David Brown, the then owner of Aston Martin Lagonda and the man who gave his initials to the DB lineage, said of the car: “I believe it is the essential character of the DB5, and its ability to perform perfectly in all conditions, that makes this car so intensely satisfying to own.”

Marek Reichman, Executive Vice President and Chief Creative Officer of Aston Martin Lagonda, said: “This exciting new association with Bowmore gives us the perfect opportunity to celebrate a vital part of our star-studded history by combining the unrivalled appeal of the iconic DB5 with the cultured flavours of this world-renowned single malt.”

In keeping with a commitment to true craftsmanship, the Black Bowmore DB5 bottle itself is handcrafted by Glasstorm, a bespoke contemporary glass studio, based in North East Scotland.

With over fifty years of glass design, sculpting and creative expertise, each bottle took up to one week to be completed, reflecting the continued thread of attention to detail and skill that defines this collaboration.

Black Bowmore DB5 1964 is presented in a handmade presentation box.  Inspired by the distillery’s coastal home, the deep blue colour and wave embossing evoke a true sense of place. Created from string-grain calfskin and featuring a custom solid brass latch and hinges plated with nickel, the box is ever reflective of the DB5.

The partners are set to unveil a series of collaborative projects and products over the coming months and years, ranging from exceptional experiences to design-led product initiatives with the goal of offering fans of the brands, across a broad spectrum, the opportunities to connect with the partnership.