Project of passion for Pride

The skilled marine professionals at The Boat Works carried out a passion project in record time to restore a significant piece of Australian boating history.

A sentimental refit project was recently, and miraculously swiftly, undertaken at The Boat Works, overseen by General Manager, Shane Subichin and carried out by the on-site marine professionals and trades.

The big little job that took the team long hours over two and a half weeks involved restoring an original Pride 65 Starfire GT to its 1960s glory in time for the memorial service to the brand’s founder, John Longhurst, marine industry and theme park pioneer.

Marine trades and services were rallied together from The Boat Works eager to contribute, working long hours and engaging more trades to make it happen.

“It meant so much to all of us,” Shane continues. “We all wanted to show our respect for John and the Longhurst family and despite being absolutely booked out for many weeks, some trades for months ahead, they all bent over backwards to get the job done.”

The first step was researching every facet of the boat, and Shane spent hours upon hours delving into the cache of pamphlets John had produced to promote the model and the Pride range. 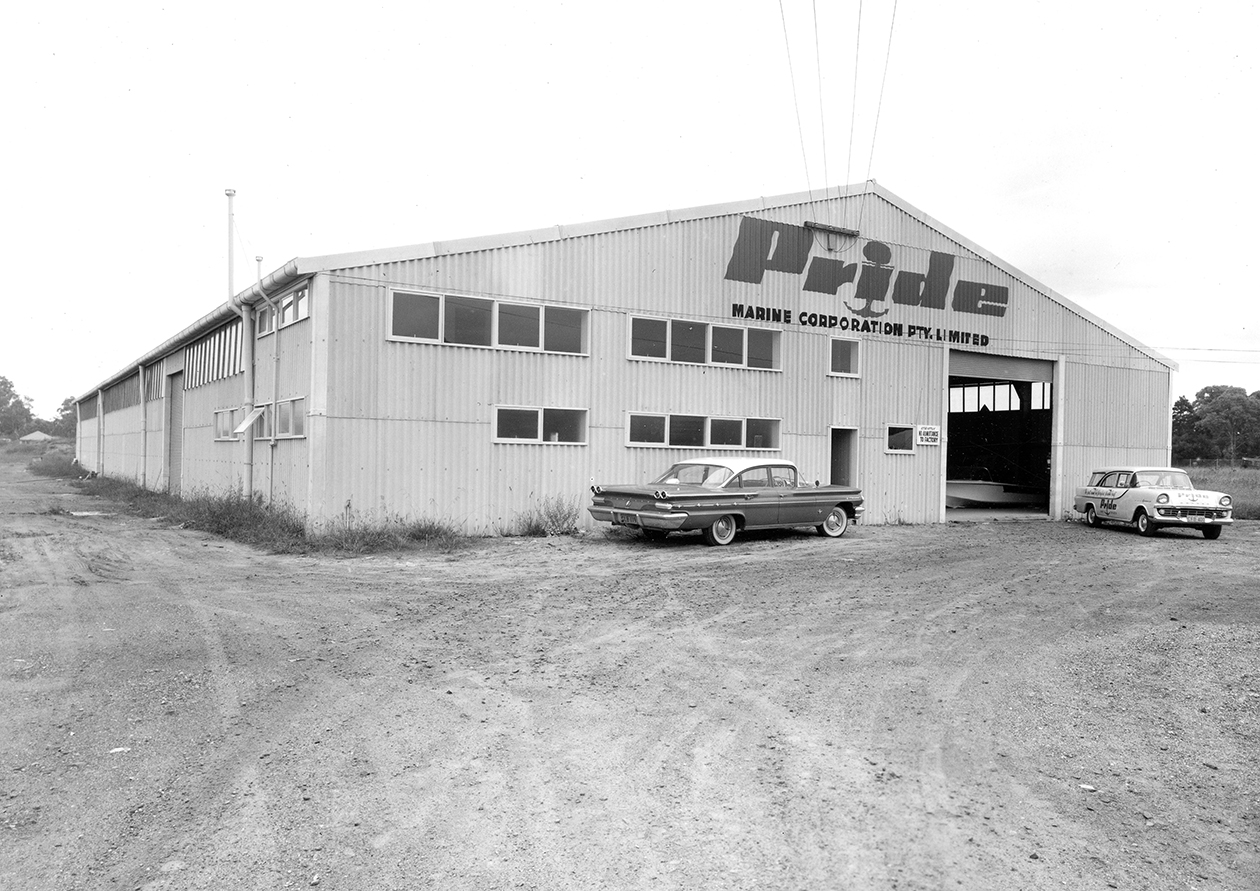 The Pride factory where John Longhurst created innovations never seen before in Australia. 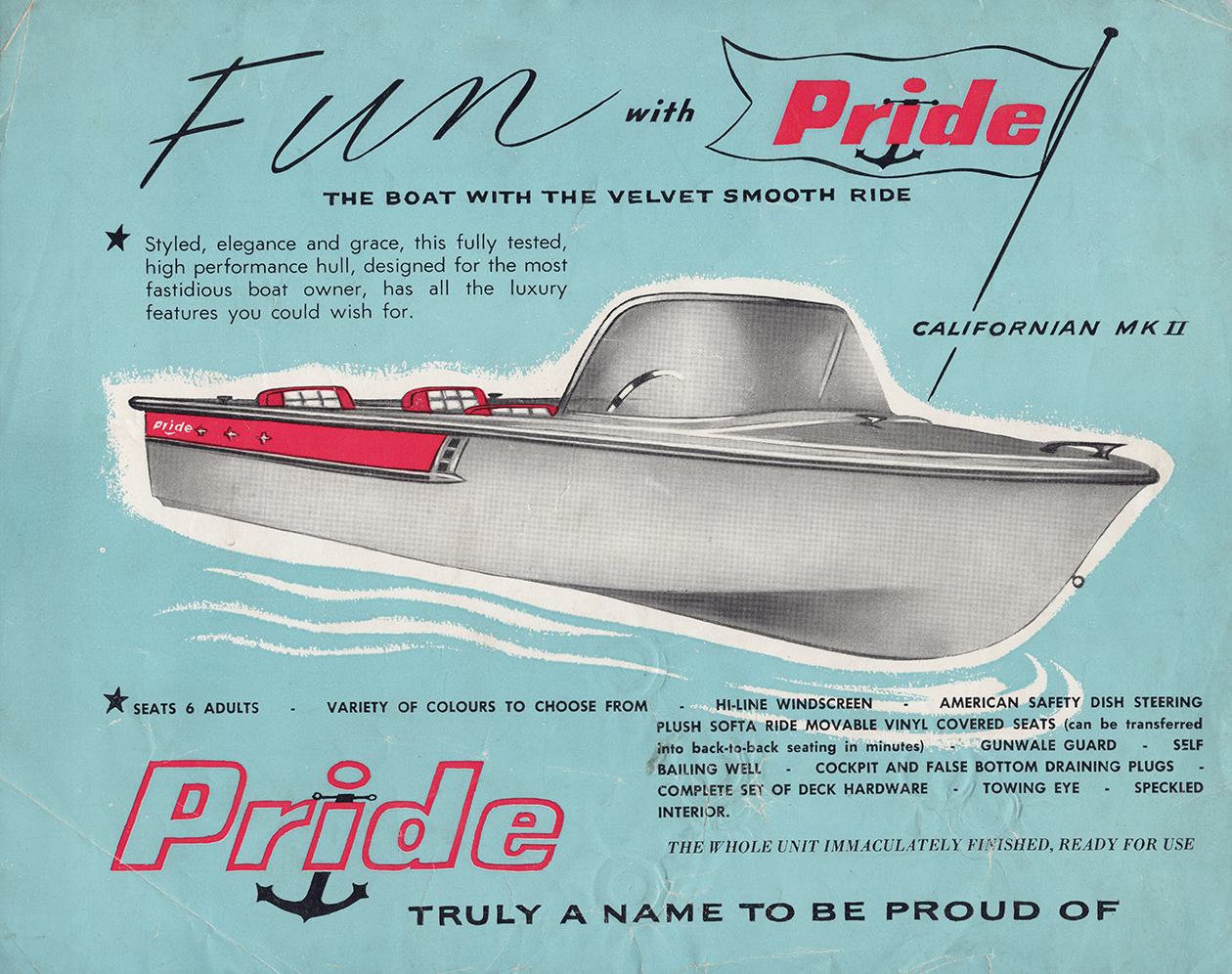 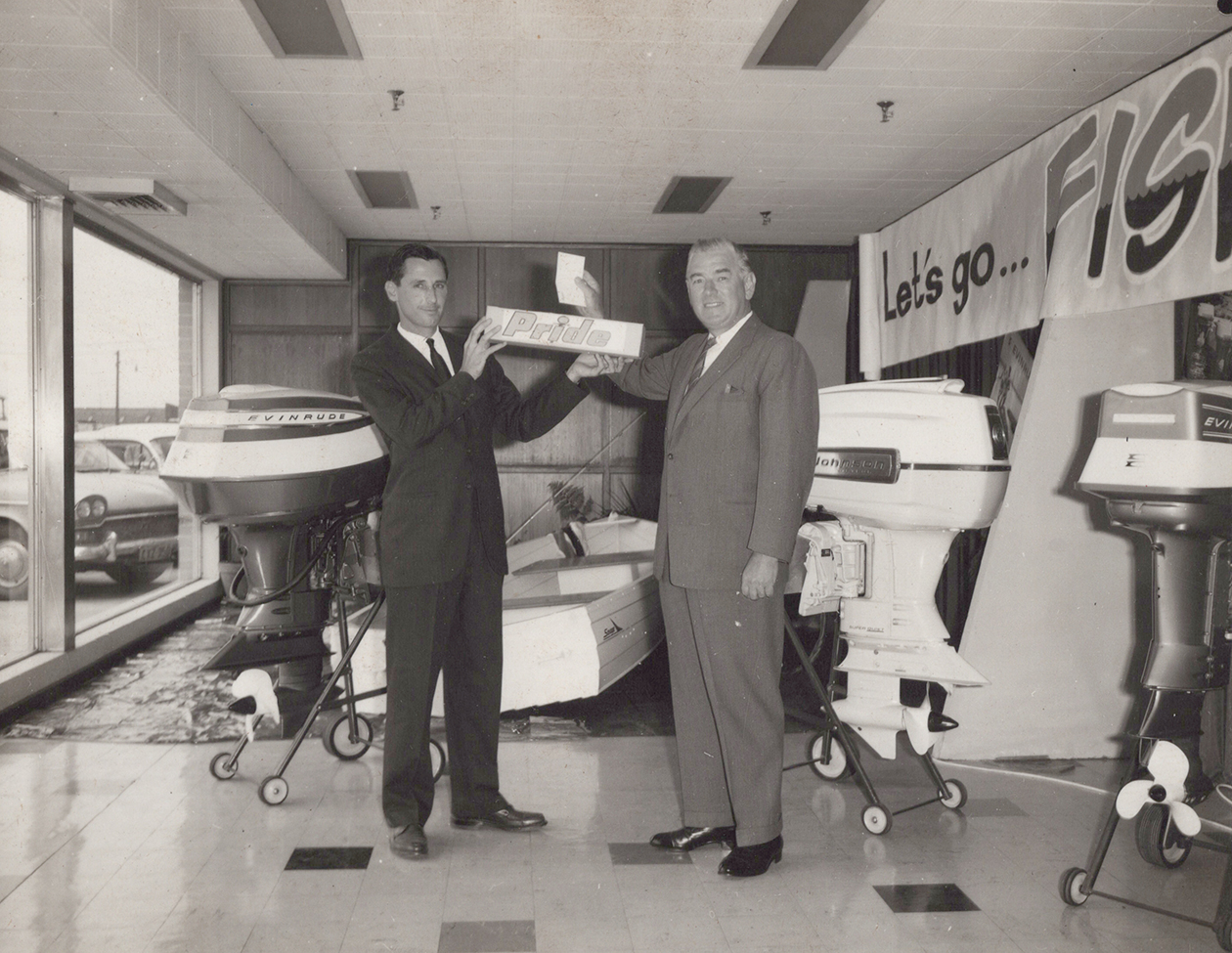 John Longhurst among motors and models. 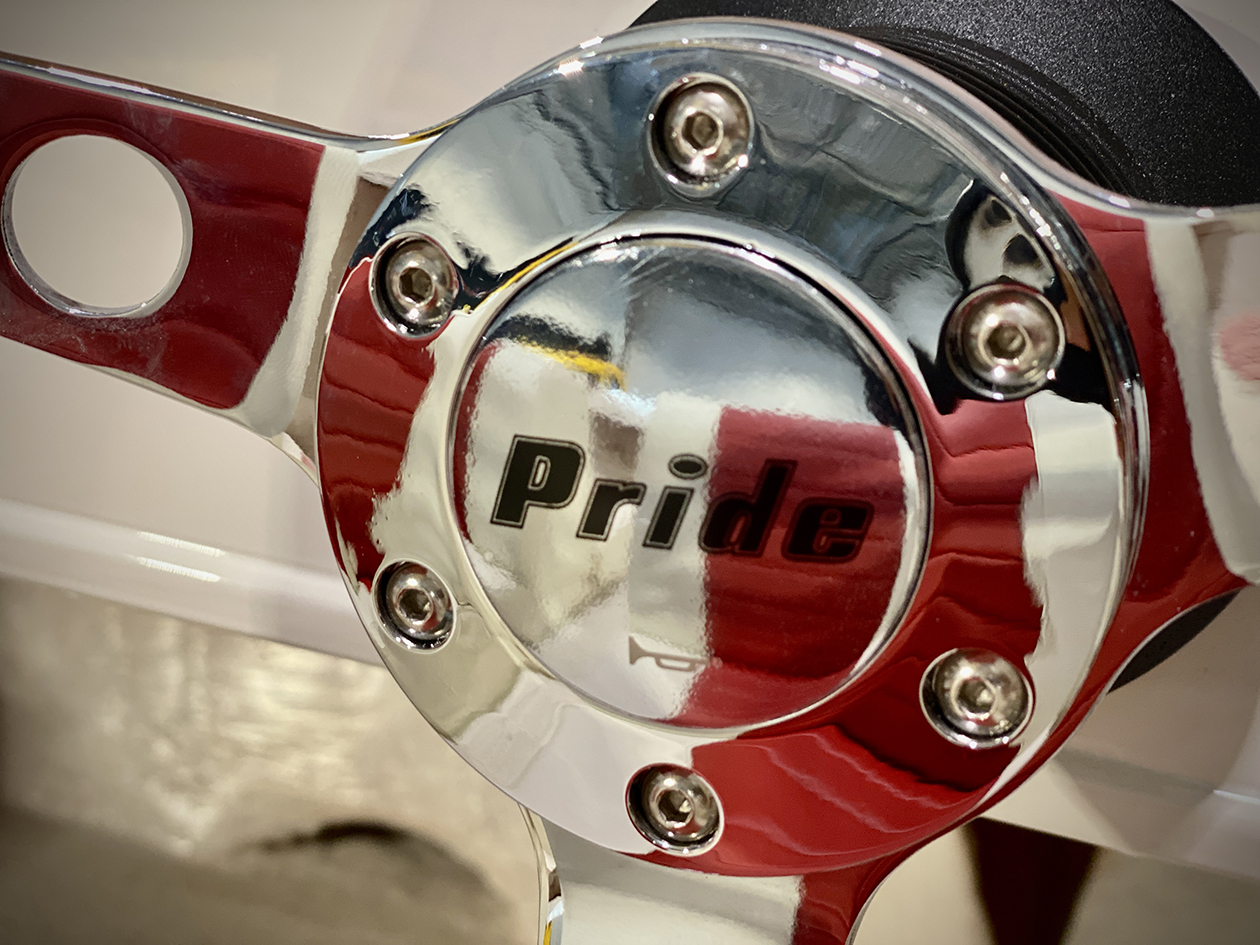 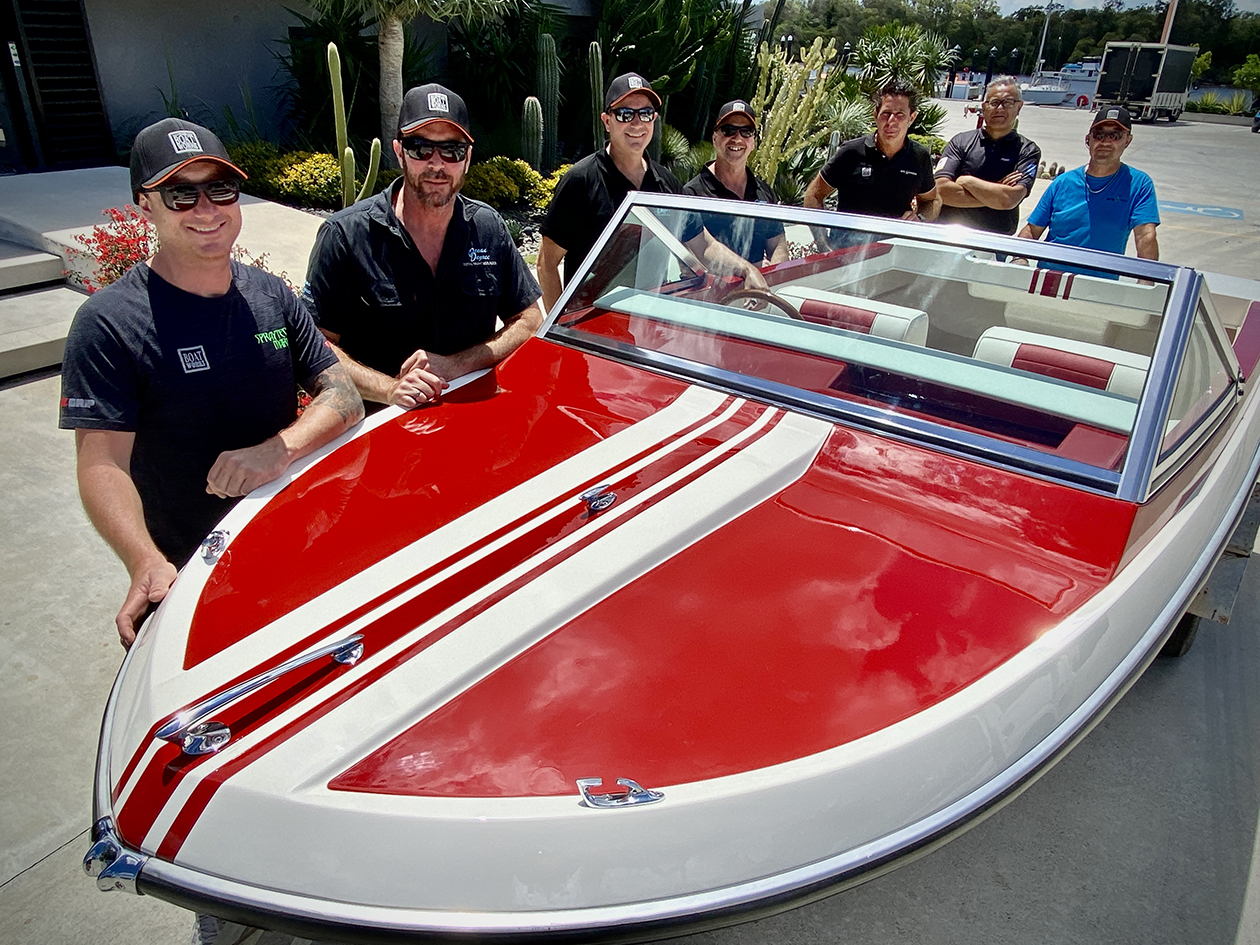 “John was way ahead of his time,” observes Shane.

“The Pride brochures capture the family fun and enjoyment of the on-water lifestyle. The slogan was, Turn Leisure into Pleasure with a Pride, and showed people water skiing, fishing, enjoying time with family.

“The broad range of boats and their quality construction is testament to the vision and skill John brought to every endeavour.”

“Given the tight timeframe, it was nerve-wracking considering we had to order the components, organise materials and trades and bring it back to life in just over two weeks.”

Under the project management of the team at Ocean Degree Yacht Service, the marine trades assembled for the job included Spraytech Marine who completed the respray paint works, replicating the traditional red colour and strip effects; Gold Coast Electroplating, chroming all original parts; Moreton Bay Boat Works for the finishing, internal fairing and flowcoat; Choice Stainless undertook the various stainless works required; Melfi Designs whose director, Michelangelo worked his magic on the custom seats, side boards and pelmets using the traditional skills of piping to recreate the original upholstery designs from the era; Marine Trade Supplies provided the paint along with the consumables; Print Image Signs undertook the timber dash finish and decals, and Ocean Degree Yacht Services carried out the fitting of various parts throughout the project.

“I put my hand up straight away,” says Levi of his involvement. “I’ve known the Longhurst family for decades and looked after John’s boats over the years. He’d be touched, absolutely. It meant something to me personally as well because of its value in the history of Australian boating.” 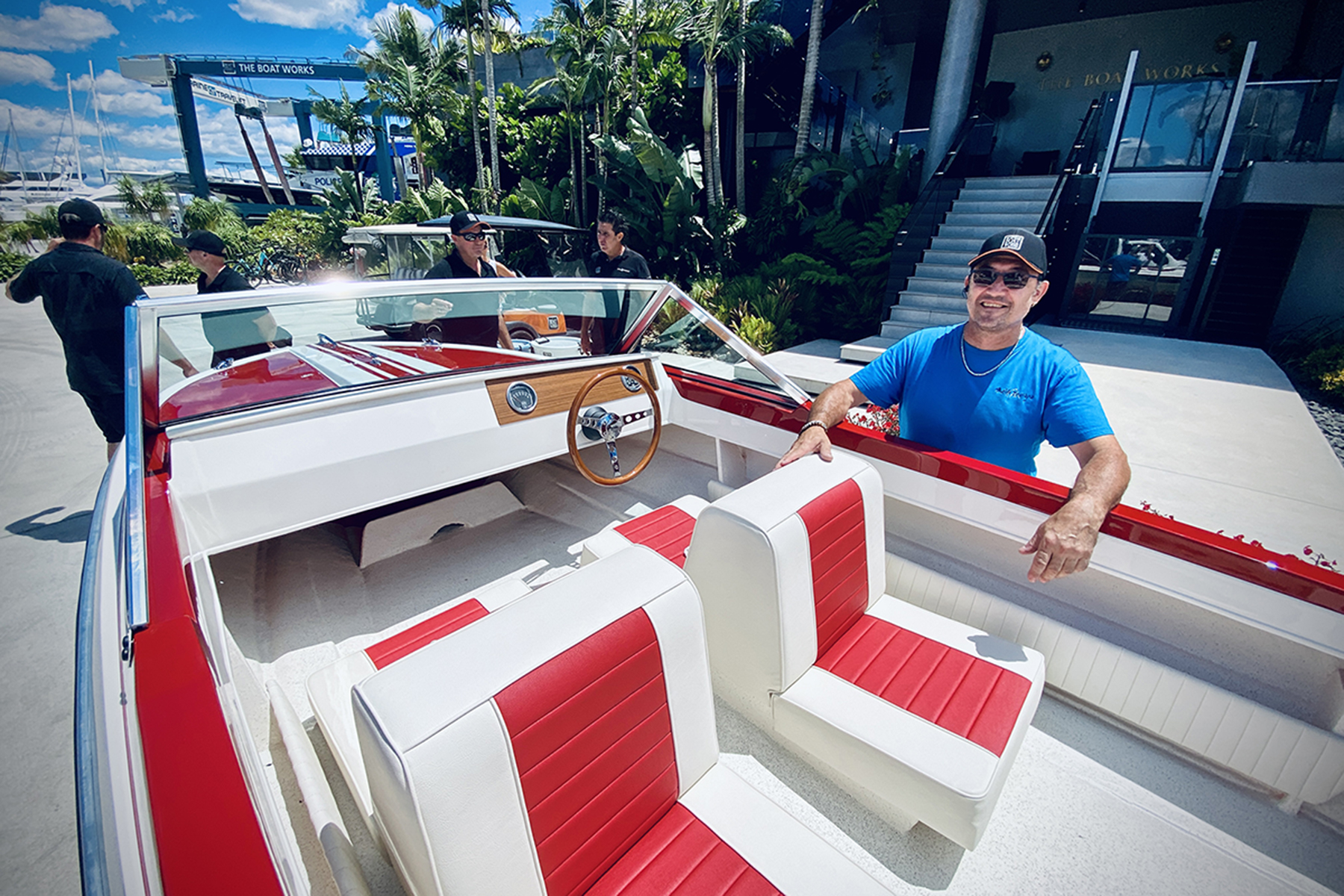 Every detail was replicated to be correct for the era. 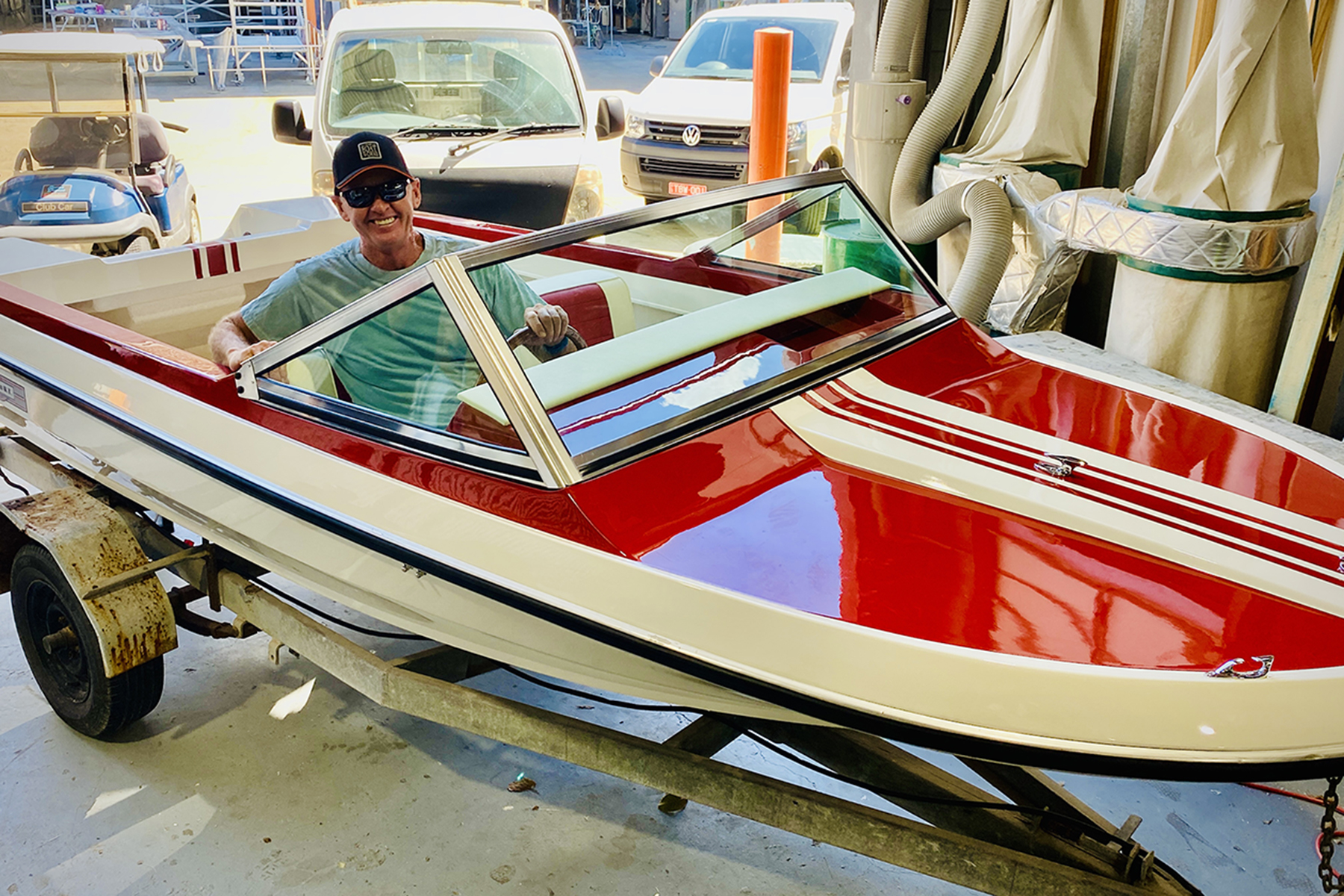 “You have a clean slate and it’s very creative. But on this project, the only reference I had to go on was a picture from a magazine.

“It required every skill in our tool kit. My background is in custom manufacturing furniture and for the past 20 years I’ve been working with boats.

“The Pride 65 was well before my time, so it was an awesome project to work on.”

“It was a small boat, but took all our skills, from frame sizing, building the seats from scratch, foaming up, cutting, sewing. We had to laminate the vinyl fabric, stick it together – all by hand.”

The results speak for themselves and stand as testament to the collaboration and talent at The Boat Works and within the Coomera Marine precinct.

“There’s a fantastic bunch of people here, all highly skilled trades who are sought after all around the region, which is why they’re all flat out!”

“It looks fantastic!” says Tony Longhurst, owner of The Boat Works. “We thought it would be decent tidy up, but it’s honestly just like new – mint condition!

Tony recalls his father being very hands on at every stage of production, from concepts to marketing.

“Dad had a second factory he called ‘007’ where they worked on new designs, made mockups out of balsa and developed all the innovations. He was involved in the design, drawings, the models, right through production.

“The only thing I regret is that we didn’t do it sooner, before he passed. We let life and work occupy all our time and sometimes we’re reminded that there are more important things.”

Now in all her ruby-red glory at The Boat Works’ motor museum Garage 25, the finishing touch will be the installation of the genuine 1965 115 hp Mercury engine, which is on its way from the US.

“This little boat will never go back in the water,” he adds. “Even though it would still cut it up and turn heads, she’s going to live on a pedestal in Garage 25 where she can be admired by everybody.”

Among the historic, vintage and unique vehicles, John Longhurst’s Pride 65 shines as a beacon to his ingenuity and an important chapter in his legacy as a founding force in Queensland tourism.