Unveiled for the first time at the Monaco Yacht Show, the Pink Gin VI is the world’s largest carbon fibre sloop.

The spectacular 53.34m silver-hulled yacht left Finnish yard Baltic Yachts in July, making a splash as one of the most highly anticipated international debuts at Monaco. The yacht features a straight stem and counter stern above the water, with a torpedo-style lifting bulb keel.
The project, six years in the making, brought together the same naval architects – Judel/Vrolijk & Co. – and the same design team – Design Unlimited – responsible for predecessor Baltic 152 Pink Gin V, which sailed over 200,000 nautical miles over ten years.
Key features include: 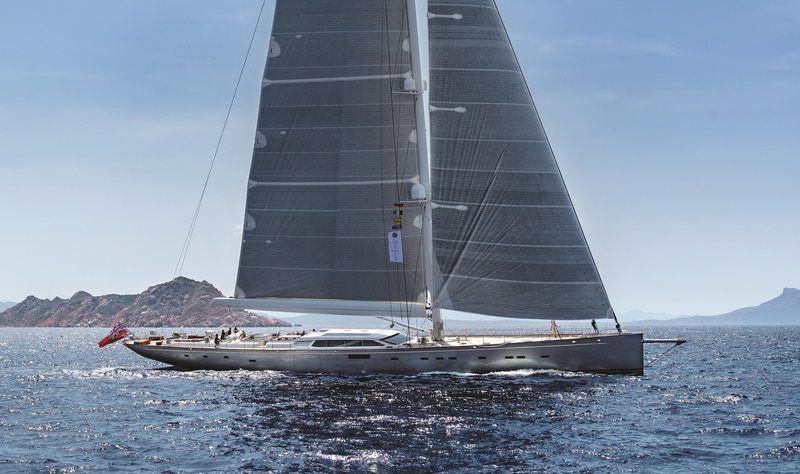 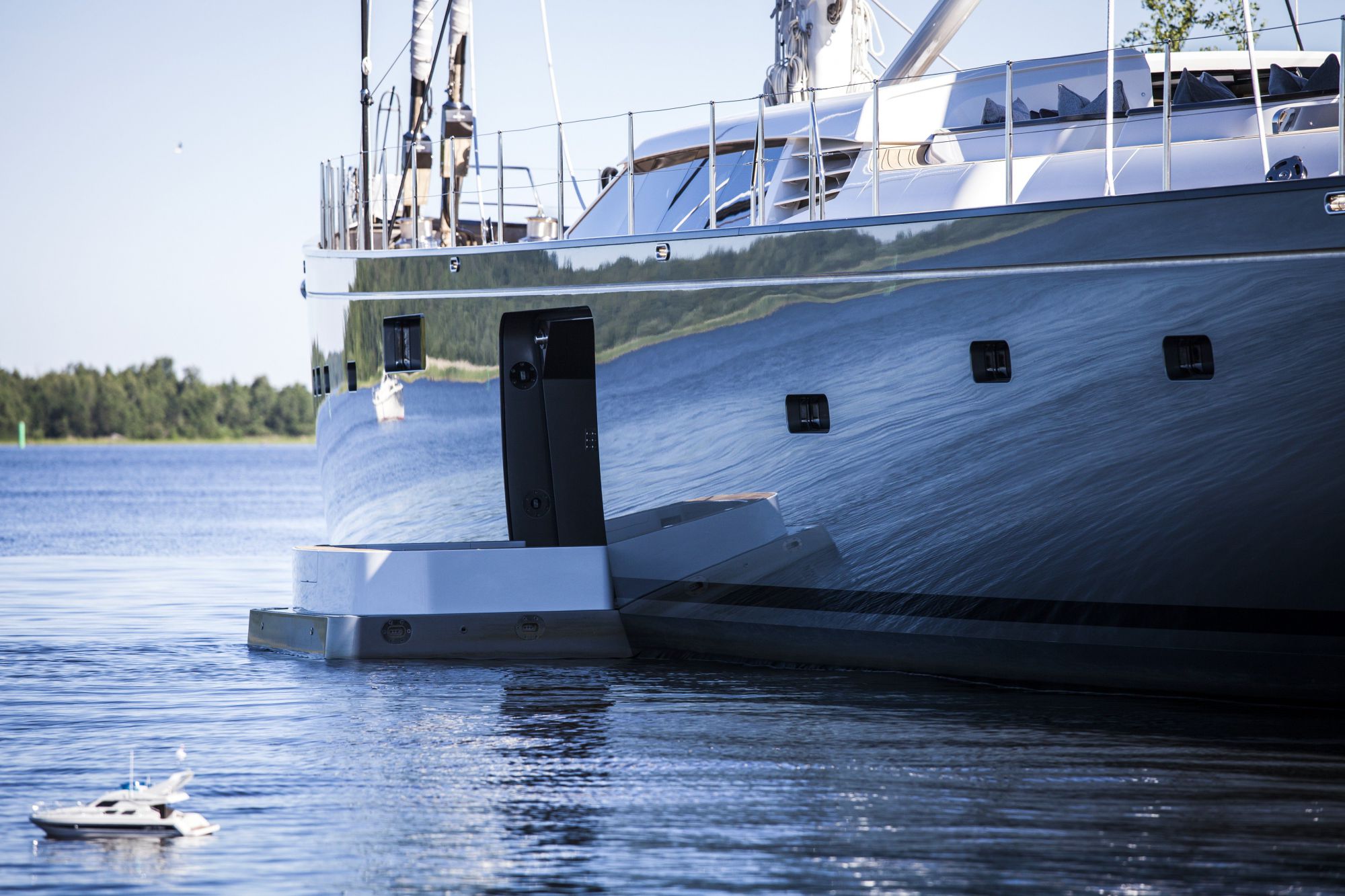 Topsides opening forming a balcony in the side entry to the main lobby. 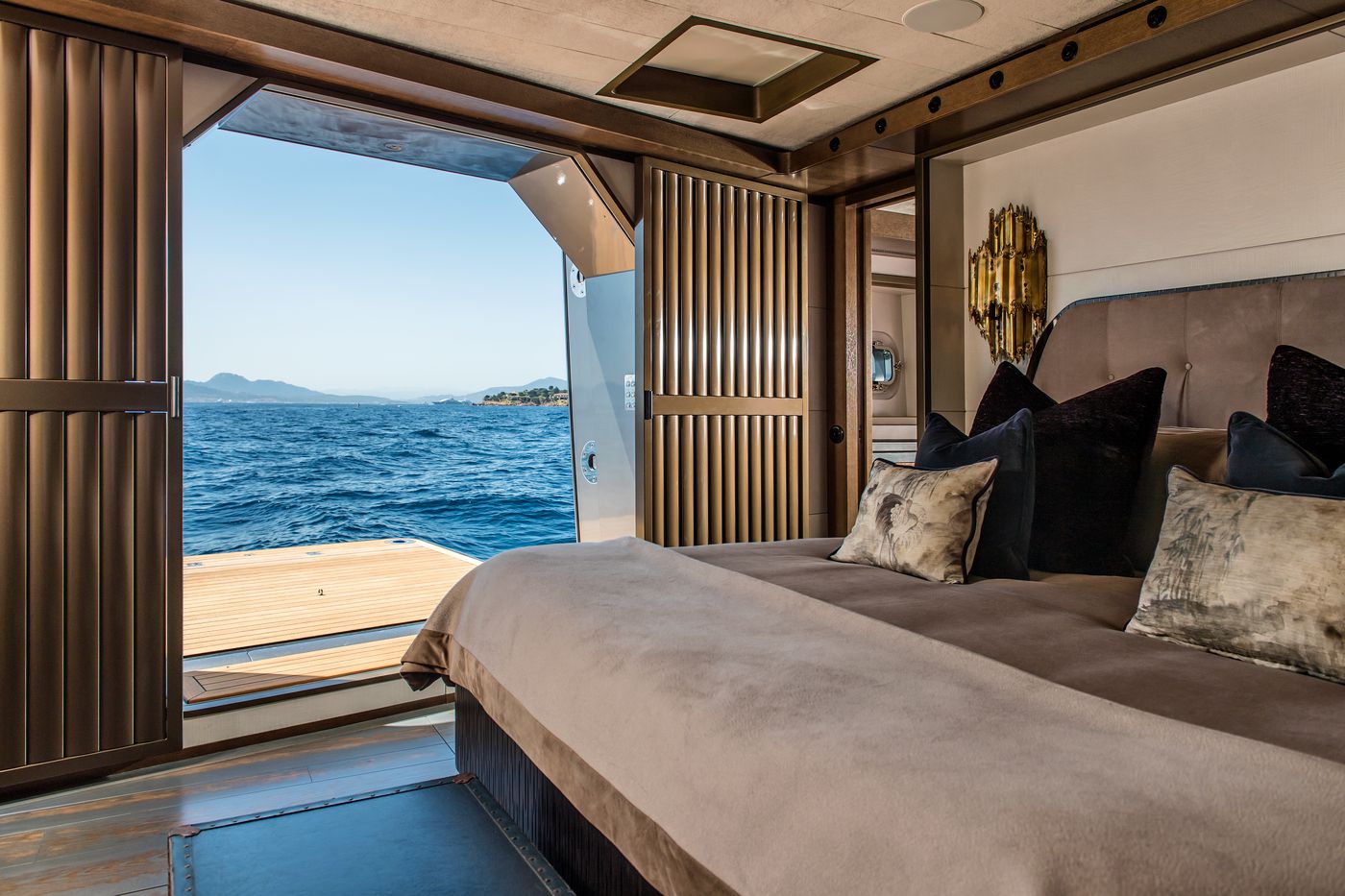 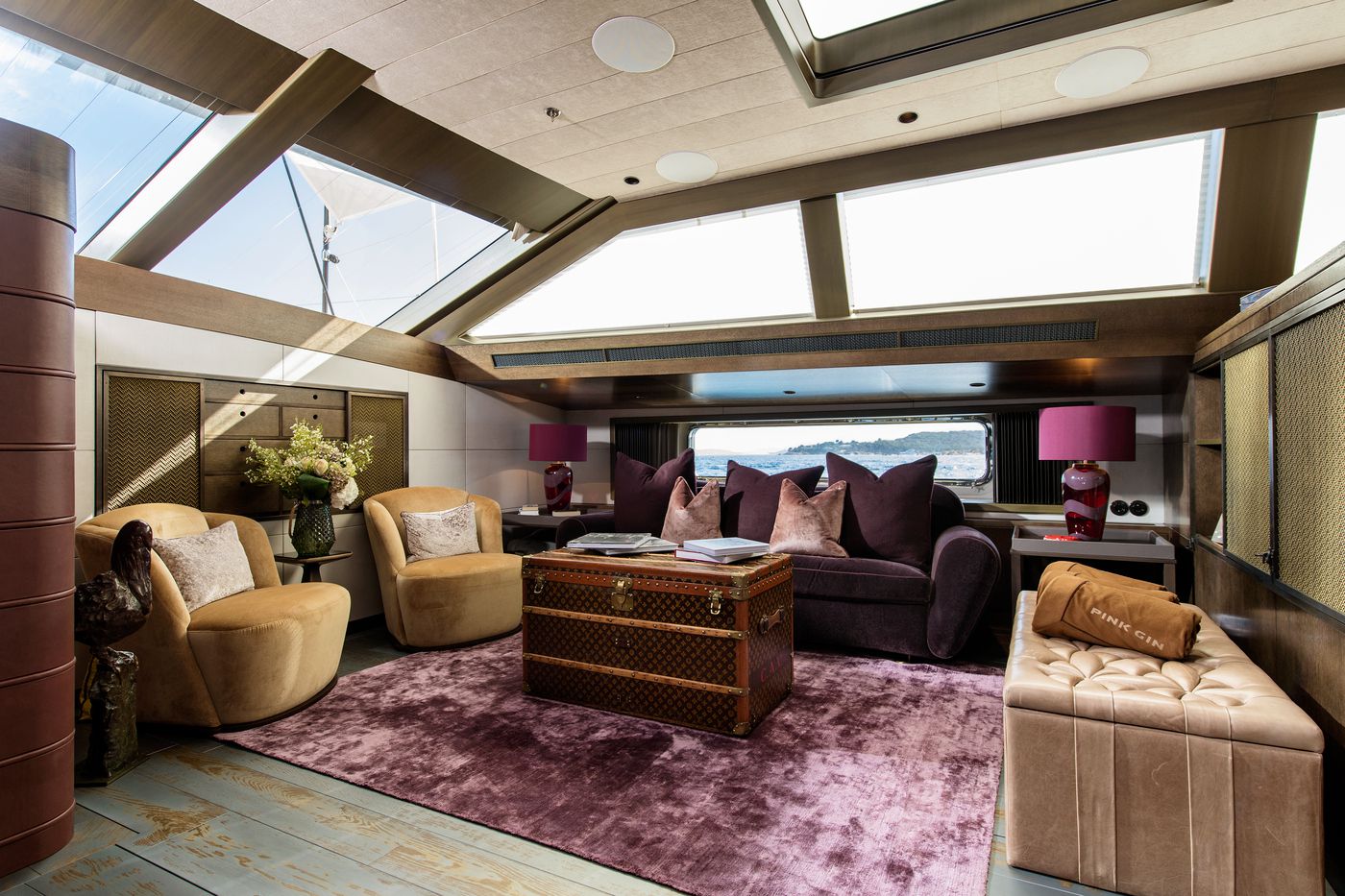 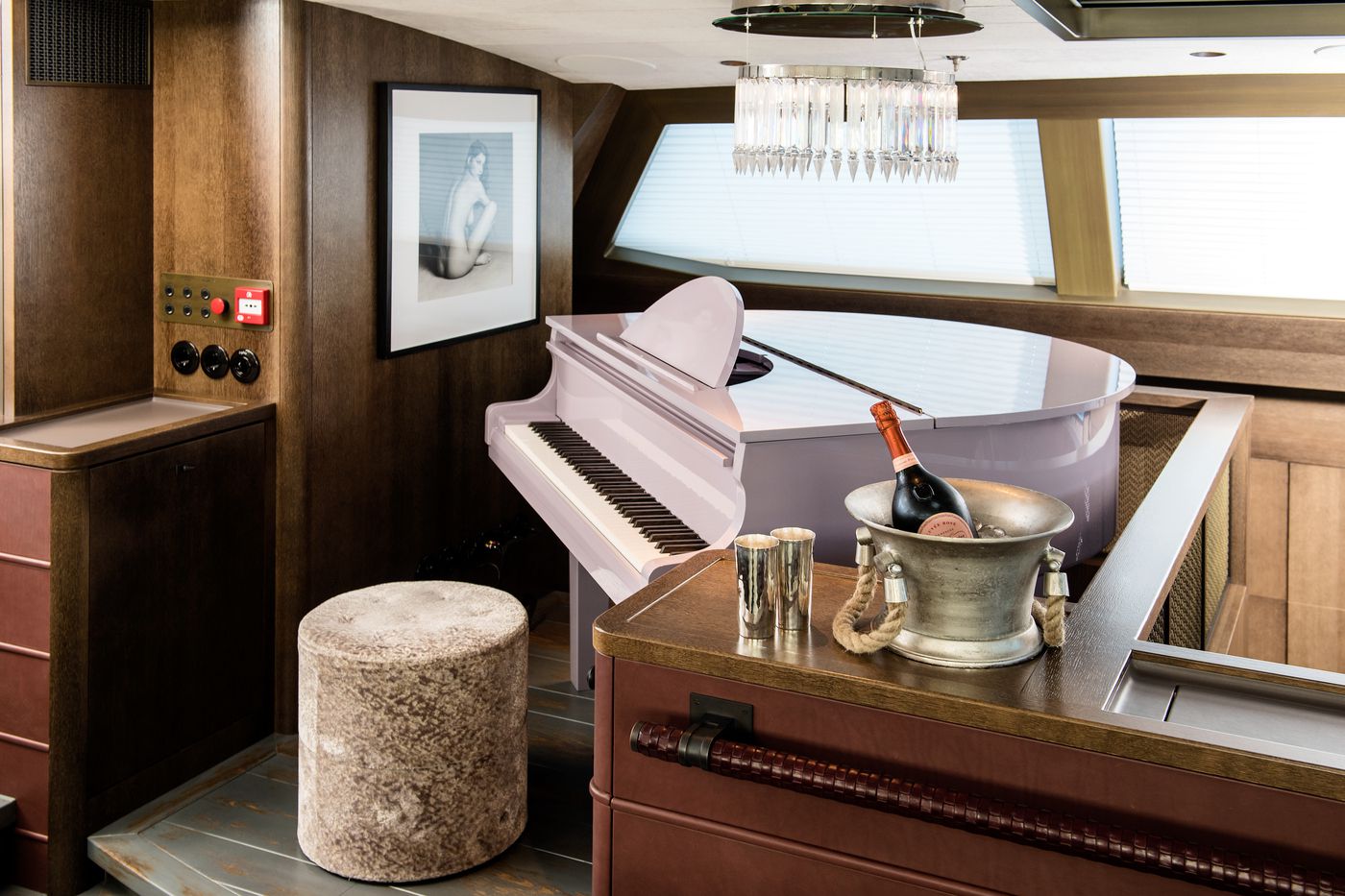 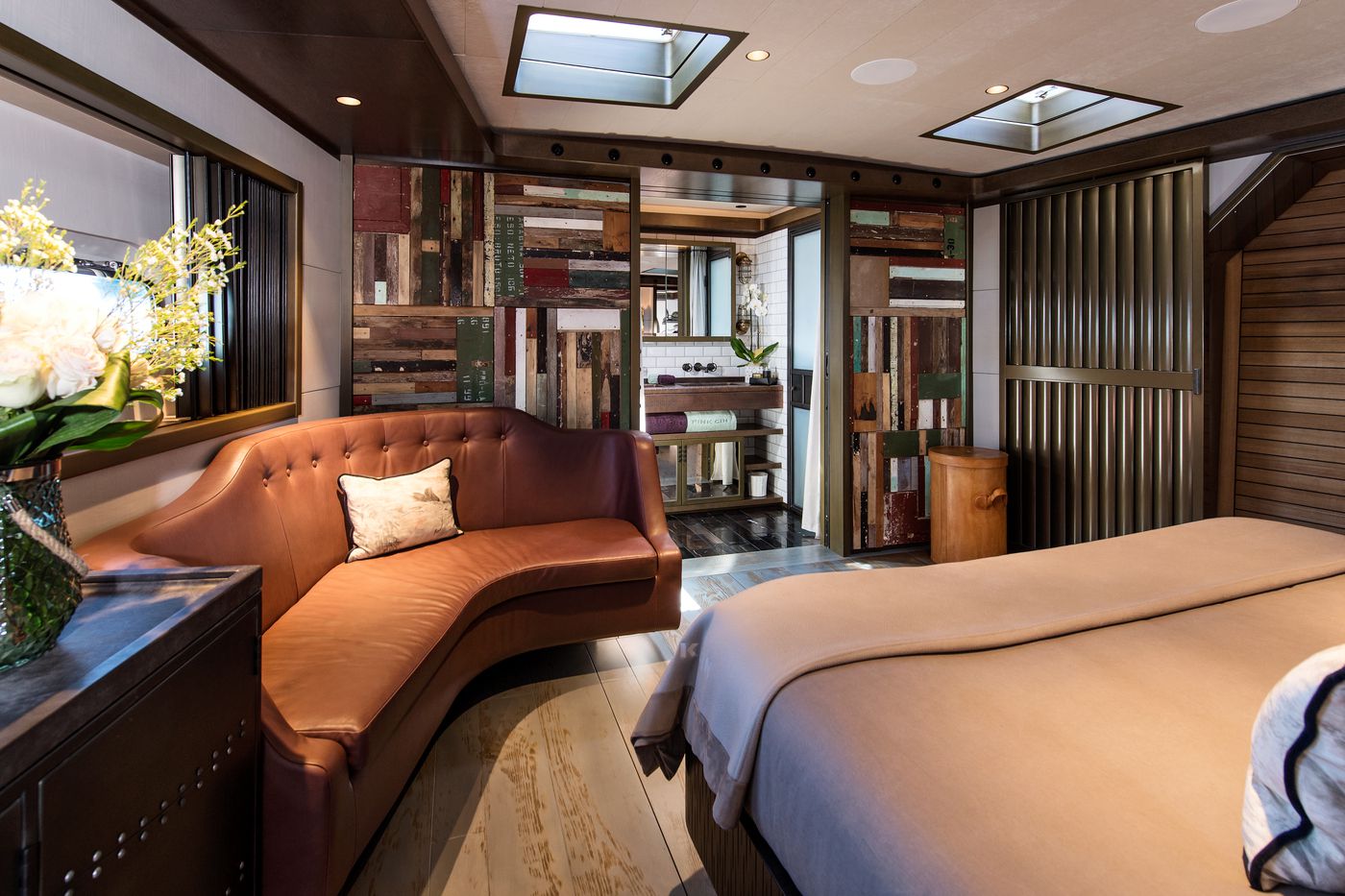 The owner’s suite looking forward to the full beam bathroom and head compartments. 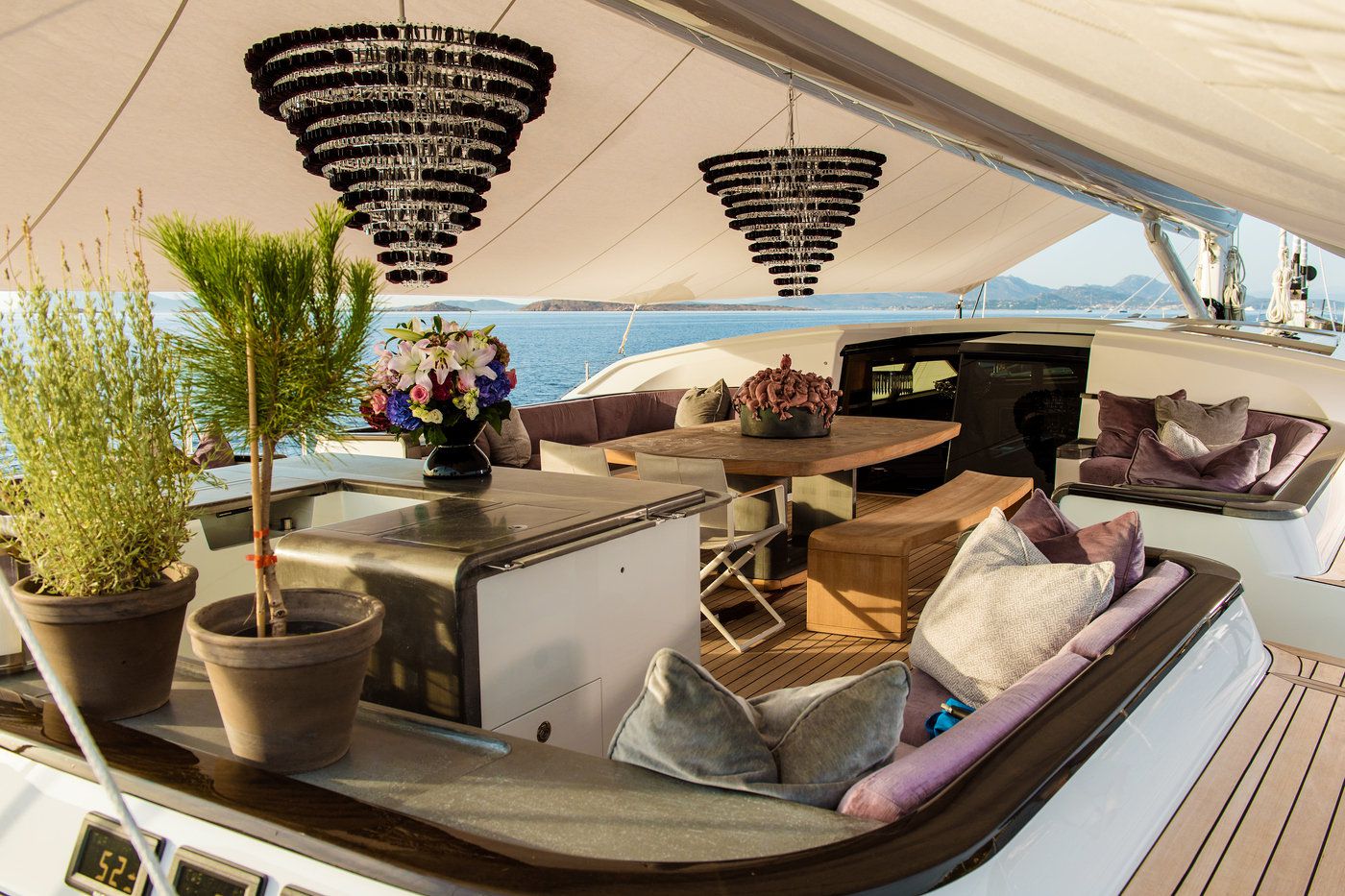 The main cockpit features a pewter-covered central bar and two chandeliers suspended from the boom.

Living al fresco is no longer restricted to out on deck. At the touch of a button, Pink Gin’s owner can access the fresh air of the sea as a panel in the topsides is hydraulically opened to create the ultimate picture window and a personal bathing platform, literally adding a new dimension to the owner’s suite. A door on the port side leads into a spectacular lobby.

When they are closed, the doors themselves become part of the yacht’s load bearing structure. Finite element analysis was used to ensure safe, DNV-GL class-approved engineering for the openings. To ensure smooth operation, the backstay, which has a maximum load of 25 tons, must be released.

Pink Gin’s accommodation is a remarkable study in interior design inspired by the owner.

Mark Tucker, founder of Design Unlimited, described what went into this extraordinary project: “When we began work on the interior design and exterior styling we started with a blank sheet of paper. The 175-foot yacht evolved as we drew on inspiration from fashion, art and music.

“The ‘button’ handles on the bathroom lockers were inspired by men’s fashion and the work of emerging artists, like Marcin Rusak, who encapsulated petals in resin to form Pink Gin’s incredible saloon table, has contributed to the yacht’s unique design.

“The idea for the piano in the saloon was inspired by happy memories of enjoying a sun-downer in Porto Cervo while listening to the resident pianist.

“Throughout the yacht, surface finishes and textures play an important role, with carefully selected materials used in unusual ways to create a tactile look. An eclectic mixture of stained oak joinery, metallic finishes and sumptuous velvets and leathers create a warm, inclusive ambience, despite the yacht’s size.

“Attention to detail is evident in everything from the velvet-lined drawers, bespoke carpet and monogrammed clothes hangers, to the subtle differences in each of the bathrooms with their sand-cast, hand-finished hardware.

“The large cockpit has been split into three areas; a dining and bar space, illuminated by two boom-mounted chandeliers, which is directly connected to the galley; the helm positions and navigation desk, and the third area, with comfortable seating, set aft.

“Pink Gin is an elaborate mix of styles and influences, brought together by the designers, the project team, the crew, the craftsmen at Baltic Yachts, the artisans and suppliers from around the world, and most importantly, the passion and input of her owner.”

“Working on Pink Gin VI has been a great and exciting challenge. The new yacht is not so much an evolution of the previous Pink Gin, as a revolution in design.”