Bass Strait between the Australian mainland and the island state of Tasmania is notorious for heavy seas and high winds coming in from the Antarctic.

For a flotilla of seven Riviera’s recently, it provided a memorable adventure as Victorian Riviera and Belize dealer R Marine Jacksons hosted a weekend voyage to Refuge Cove, a small bay at Wilsons Promontory, 145 nautical-miles east of the safety of Port Phillip Bay and the city of Melbourne.

“The Prom”, as it is affectionately known, is the most southerly point of mainland Australia, and is named after Thomas Wilson, a little-known English merchant and friend of explorer Matthew Flinders.

Refuge Cove is well named, being often used as a stopover for boats travelling along the Victorian coast or waiting for a weather window to cross the Strait to Tasmania.

The Riviera flotilla left various homeports in Port Phillip Bay on a Friday and met at Queenscliff Harbour near the Bay’s entry headlands. Everyone enjoyed a dinner at the local hotel before returning to their motor yachts to prepare for an eight o’clock start the next morning. 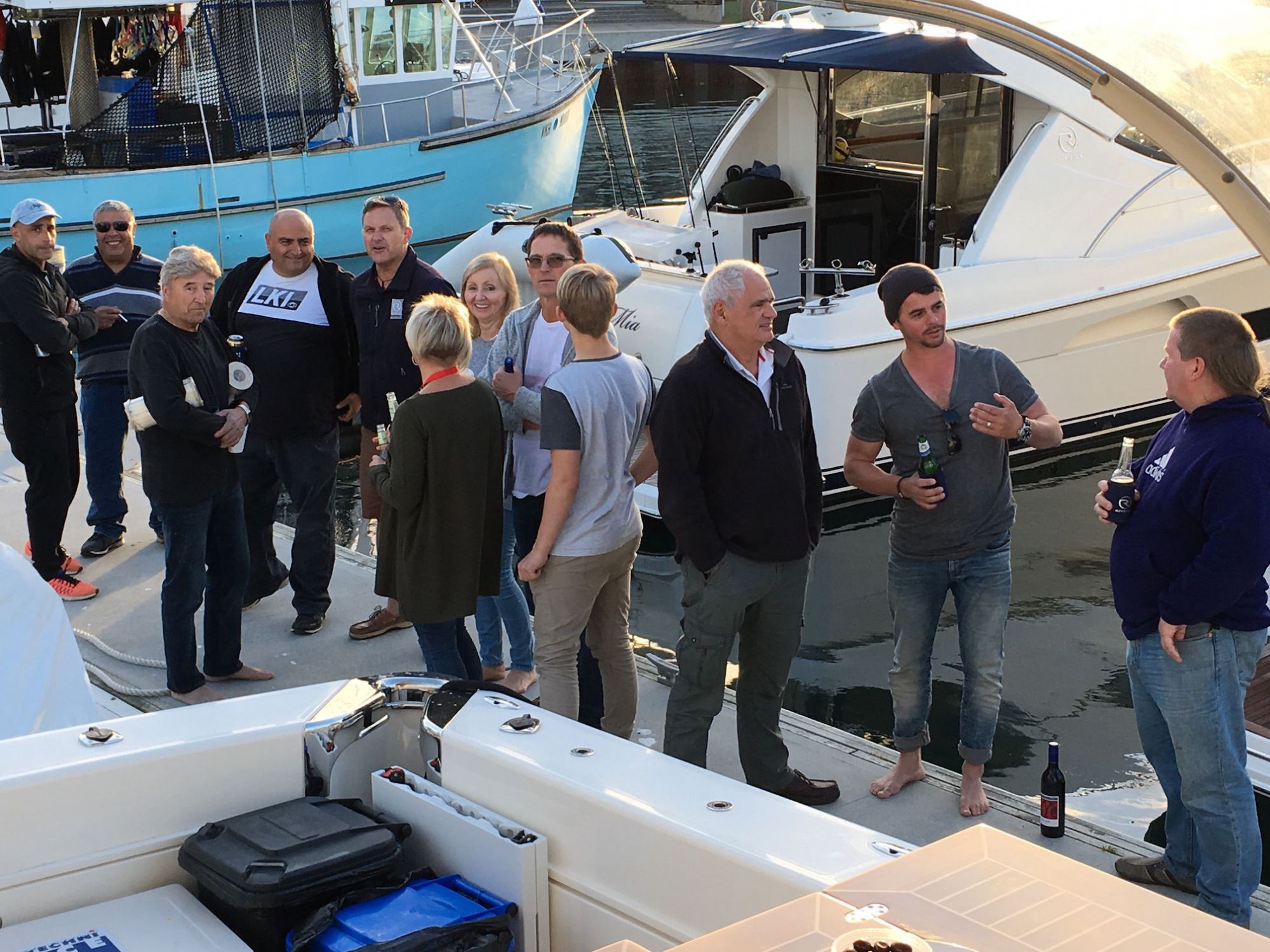 Getting to know one another on the dock at Queenscliff Harbour. 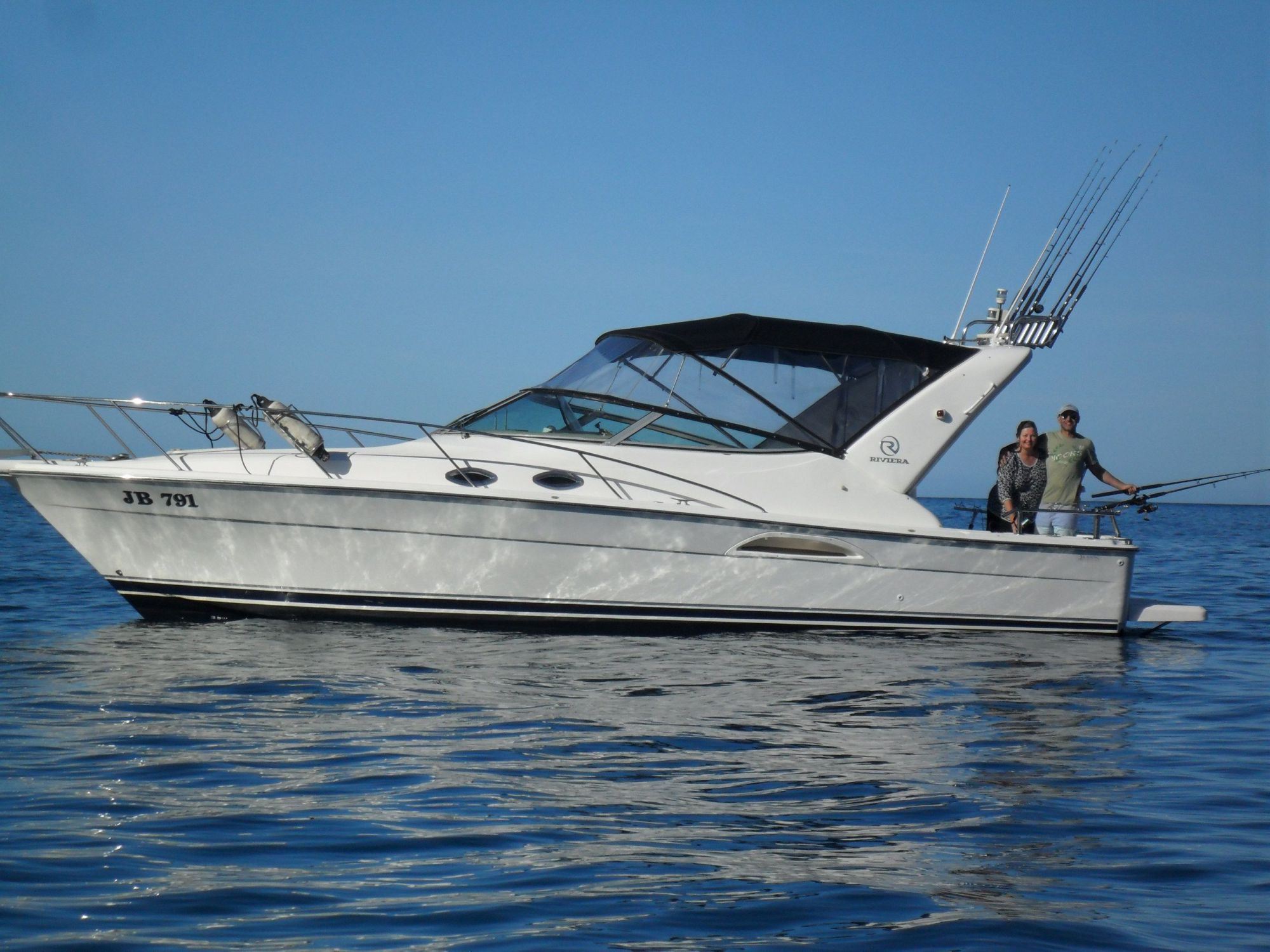 The Sosini's aboard their Riviera 3000 Offshore Series II, Pescara

“Six owners had never taken their motor yachts outside the Bay before and were eager to explore the sights of the coast,” said Ray Haddrell aboard his Riviera 565 SUV, Rayzaway V.

Ray has owned five Riviera’s and has voyaged along much of the Victorian coastline as well as travelling north to the Riviera yard in Queensland on a number of occasions.

“The Refuge Cove Experience organised by Stuart and his team has given all the owners the confidence to voyage further afield,” he said.

“The weekend has given me great confidence in our Sport Yacht. She handled the conditions perfectly,” he said. “It was a great adventure.”

After a five-hour voyage, the flotilla anchored at Refuge Cove.

A leisurely afternoon was spent taking in the sights of the Cove. It offers spectacular scenery, including huge granite mountains, rainforest, sweeping beaches and coastlines.

Stuart Jackson and his team set up a barbecue on the beach and the group enjoyed a hearty meal and great conversation, discussing the events of the day.

“It was great to spend time with like-minded motor yacht owners,” said Phil Cozens. “We shared experiences and information. Stuart and his team were fantastic, imparting their knowledge of yachting and of the capabilities of our Riviera’s.”

“The trip of a lifetime,” was how Tom and Marianne Sonsini aboard their Riviera 3000 Series II Offshore Pescara summed up the weekend.

“Stuart’s skipper, Dave, was priceless,” he said. “He was able to answer every question I had.

“I learned why the other Riviera’s are all powered by diesel engines. We have large twin petrol engines powering my Riviera M430 Sports Cruiser. After the weekend, I decided to name her Thirsty.

“The weekend was a fantastic experience. I took a couple of friends on this voyage. Next time I want to bring my wife and young children along. They would have loved the beach.”

Sunday was spent fishing, swimming and walking in the national park before the group came together in the evening aboard Ray Haddrell’s Rayzaway V for drinks and food.

“We partied late into the night,” said Ray.

Monday morning was an early start for everyone.

“We roused the skippers at around five o’clock to depart at 6.30am and head back to our home ports,” said Stuart Jackson. “We were rewarded by a calm sea all the way home.”

Sitting down with Sunseeker

Sitting down with Sunseeker