Since starting production in 2014, Axopar has redefined the crossover between the RIB and dayboat, becoming a major success story in the process and turning out 600 boats a year that are known for their utilitarian looks and solid sea-handling.

Co-founder Jan-Erik Viitala puts it this way: “We started without compromising the hull, then adding all the other accessories around it. Other manufacturers build the other way; starting with how many people need to be on the boat and go from there.”

Axopar got underway with just one model, the 28 T-Top. That’s now expanded to three models: the 24, the 28 and the 37. But the array of configurations – Open, T-Top, Hard Top, Sun Top and Cabin – means an owner can tailor their Axopar completely to their personal taste. There are literally dozens of choices in regard to layout and amenities such as wet bars, galleys and seating.

Australian Axopar dealer Eyachts has developed a highly successful partnership with the Finnish brand since 2015 when Eyachts Managing Director Peter Hrones headed to the Dusseldorf Boat Show to check out the new and unconventional brand – and came away impressed. 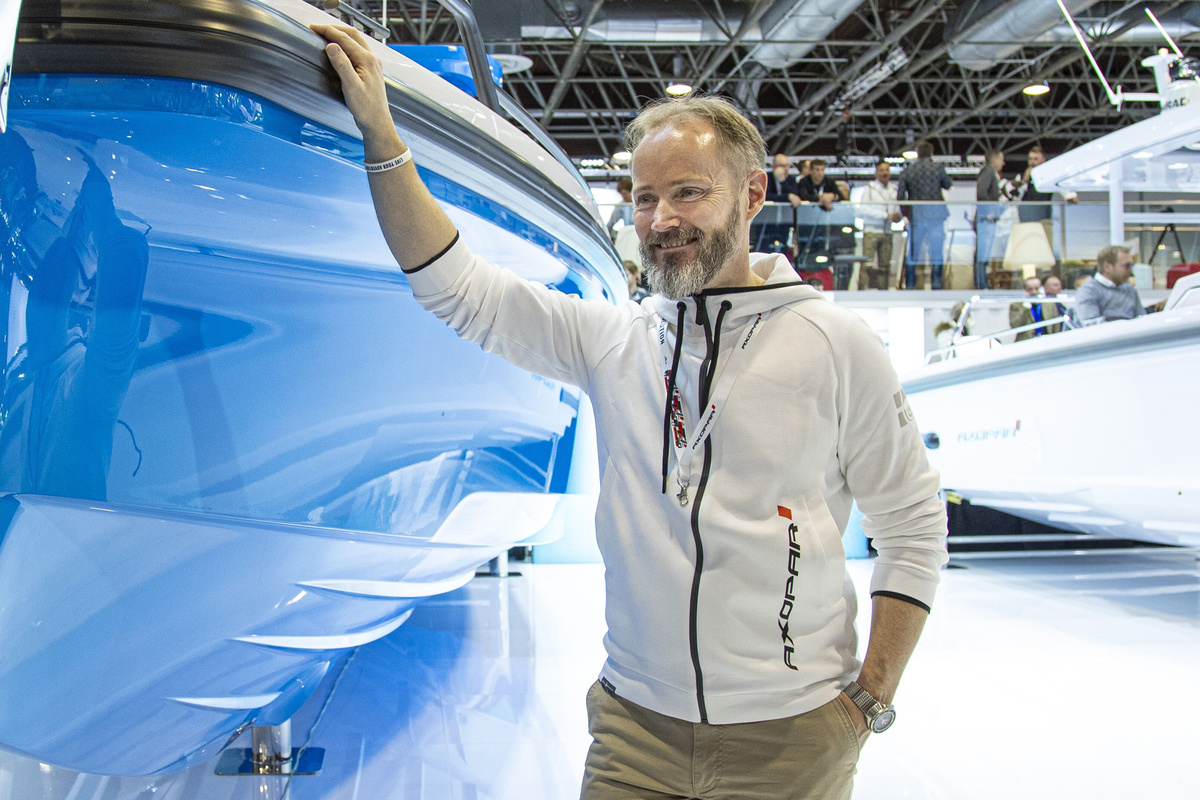 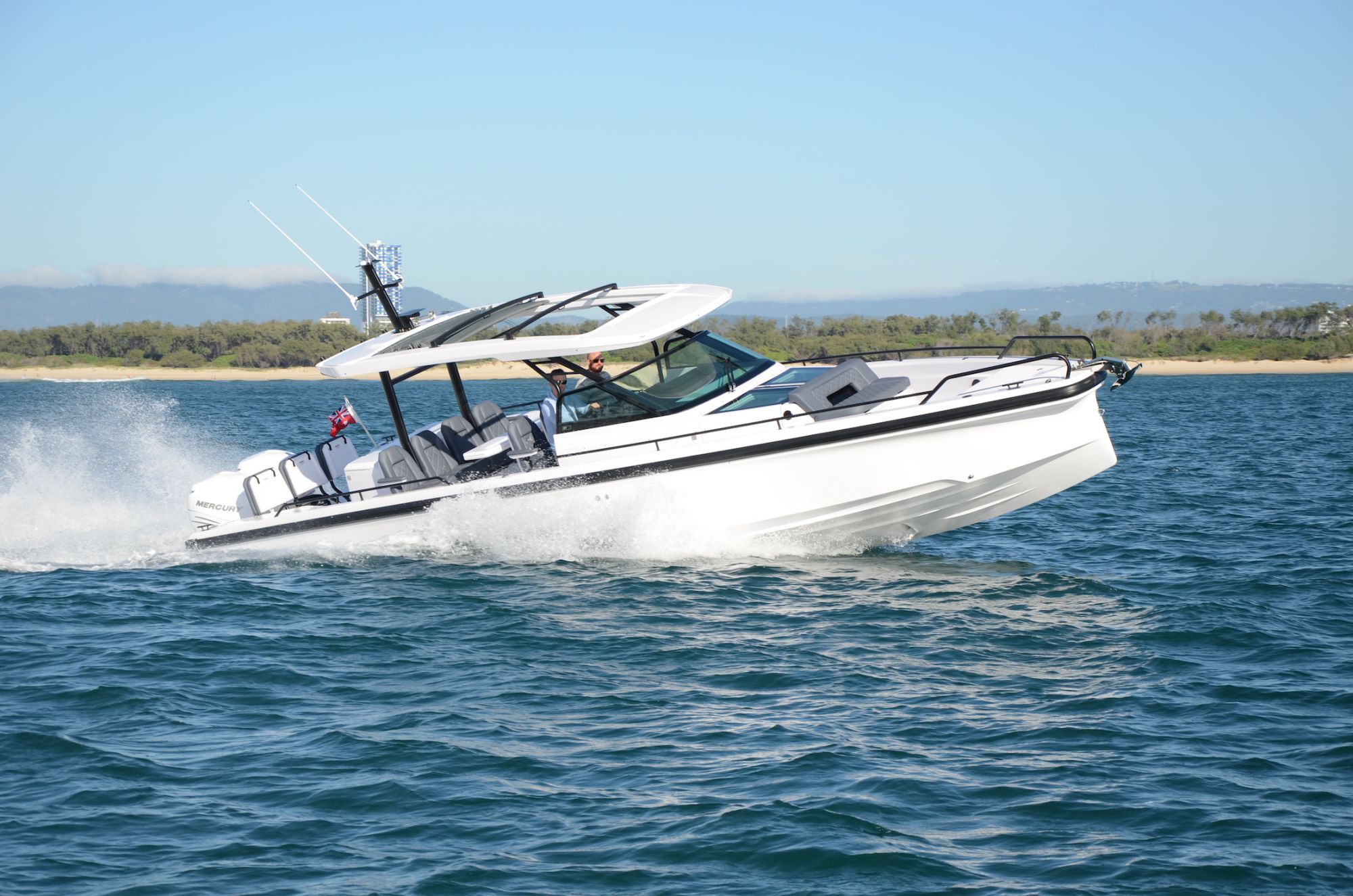 Eyachts is now among the top five of Axopar’s more than one hundred dealers worldwide and Hrones has proved a staunch convert, owning a succession of Axopars, including a 28 that was recently sold.

He now has a 24 T-Top and those of us who live on Pittwater regularly see him out with his family, coming up with new and novel ways to utilise the Axopar’s many features – wakeboarding is the latest.

To mark the milestone of the arrival of the 100th Axopar Down Under – a 37 Revolution Sun Top – a webinar was organised with Jan-Erik in Helsinki. Here’s a condensed version of the session.

Axopar has established a very broad appeal. Superyacht skippers, professional sailing teams and families all get a lot out of them, is that what you originally envisioned?

Axopar is still a young brand but one with a long tradition. We have evolved from renowned brands and have fused that experience and knowledge into what’s become Axopar.

For us, it’s been really exciting to see Axopars being used by customers around Australia in many types of weather conditions. It’s heartwarming to see this concept as the idea was, from the very beginning, to make one boat with global appeal.

What can you tell us about the new boat, the 37 Revolution? What are the main changes?

It’s the sum total of all our knowledge infused into one revolutionary new model. We had the launch in January for the European market and before we could even unveil the boat for the public, we already had 100 orders for the boat. We think the 37 Revolution is ahead of its time.

There are 380 changes – we have changed the chines, the freeboard and the stepped hull. The main advantages are the boat’s driveability and the hull. We have the unconventional, very sharp bow, stepped hull and evolved hydrodynamics.

There are some significant efficiency gains on the 37 Revolution. Can you explain this?

We spent twice the time in research and development and twice the capital in developing the 37 Revolution than we put into the Axopar 37 Mark 1 before we had a layout. But that was time and effort that we wanted to put in to make it stand out.

We also wanted to provide a truly new driving experience on the water. We have utilised Mercury’s new generation V8 engines to obtain quite significant improvements and that has been coupled with a more efficient hull.

We can do a much wider cruising speed range and on some models, reach a 300-nautical-mile range. When the new Revolution gets up on the plane – let’s say at 24 knots – the twin-stepped hull kicks in and you can see the savings on the fuel consumption graph.

What about the options? There’s a lot of choice.

There is the fully open option (Spyder). When we are driving that, you notice the silence compared to a cabin. It’s a great product for people who have been using RIBs. There is a huge water sports storage box, by popular demand. A wet bar is also available, and a galley module.

The X Cabin version is like the SUV of the water. The fully retractable roof and the wide sliding doors open up the cockpit. When the weather is good, you’re driving a roomy, open boat. When you anchor, usually the cabin boats have zero accommodation outside, but with the 37 you still have a front cabin, the aft deck with a sun-bed and a seating arrangement in the front.

It is a truly versatile crossover between an open boat and a fully enclosed boat.

We are producing 50 percent of Axopar 37s with cabins – and that’s in Florida, New Zealand, Australia and Thailand. People just want the ease of use and that’s why the cabin versions have been so popular.

The enclosed head option and separate shower was something we received strong requests for, and we did this by increasing the front cabin space by 30 percent. 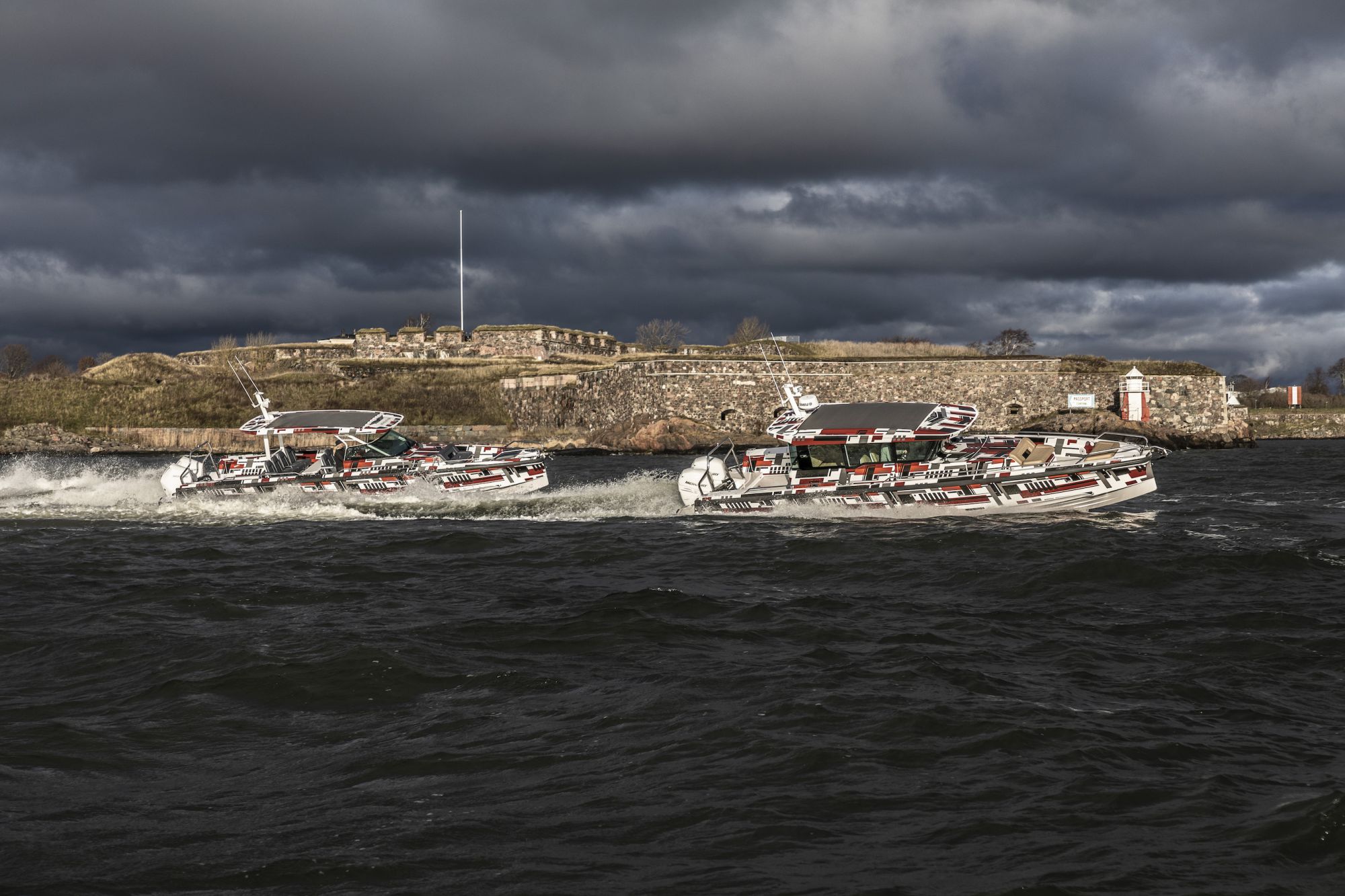 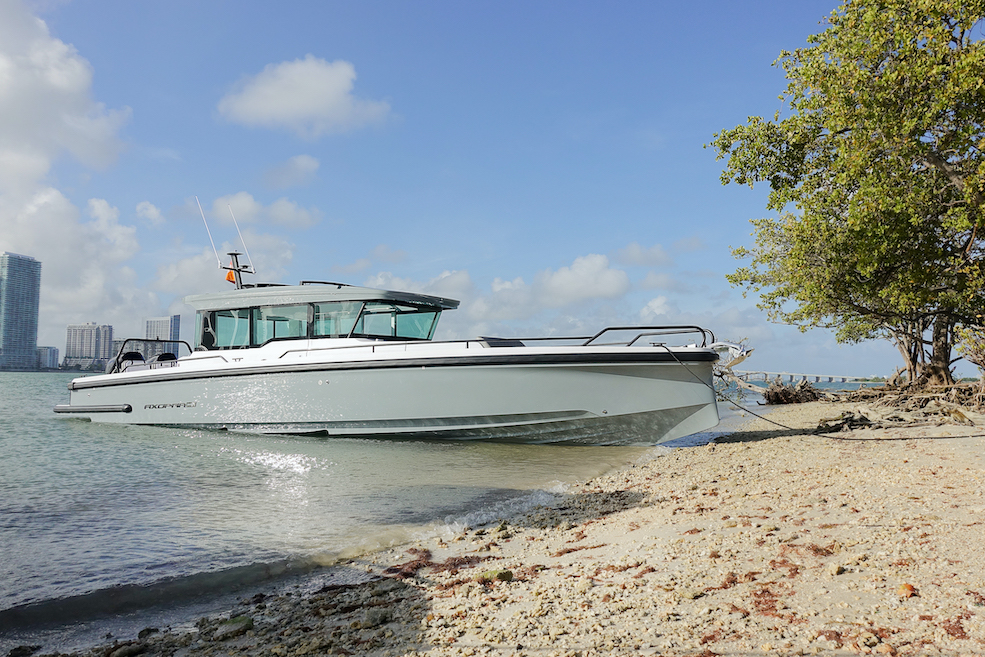 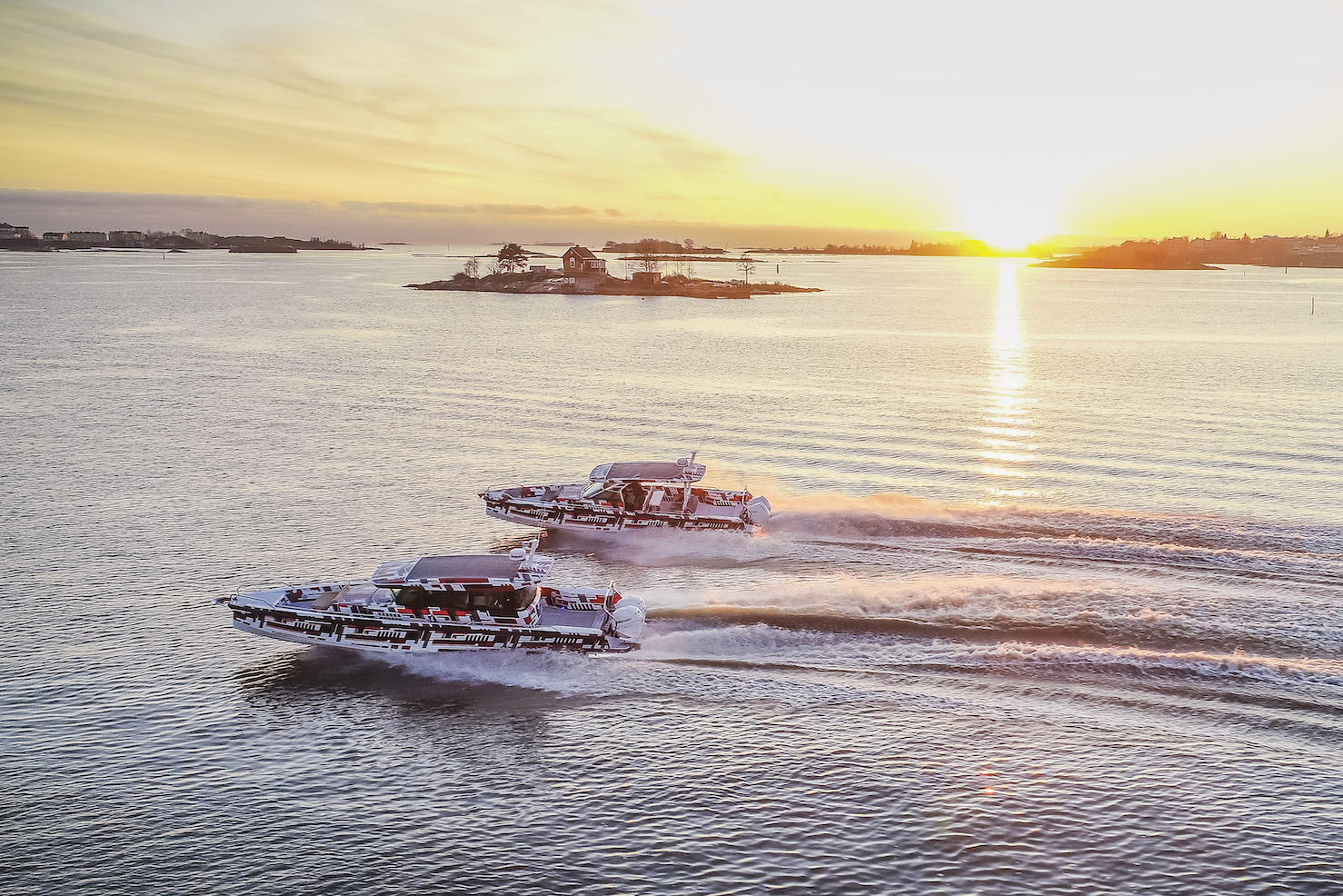 How is the new (second) factory going? What are the production numbers for the 37?

The second factory started producing the 28s and will definitely increase the production capacity for the 37s. We are already producing six 37s in five working days and we have a target of producing ten 37s every week to keep pace with demand.

What quality control processes are in place?

It’s critical we do the engineering properly from the beginning and we are especially careful about that. We have also brought in a lot of marine industry professionals and experts from Finland and around the world to the Axopar team for quality assurance.

The last few months have highlighted new ways customers are using their boats. Isn’t that flexibility a key Axopar feature?

In general, Axopar owners have owned a number of previous boats and they appreciate these functionalities. We have owners who have already been boating for years and they are doing additional cool stuff with the boats.

We see people using their boats for crab fishing, water-skiing, scuba-diving, snorkelling and stand-up paddleboarding. People are innovative and they modify or modulise them into a product that suits their own use.

We’re seeing a very strong movement to adventure on and off the water and the boat is part of the experience. People are taking their boats to access cliffs for rock-climbing, or taking mountain bikes to ride on secluded islands.

There are rumours about larger models, including possibly a 45 coming out. What can you say about that?

There will be something happening. But at the moment we are focusing one-hundred percent on the 37 Revolution. There will definitely be a bigger one. When that product hits the market, it will be spectacular, and a continuation of the Revolution program we started with the 37.