The new addition to the Ferretti Custom Line planing range was presented at the 2018 Miami Yacht Show.

The Custom Line 106’ is a new addition to the planing range. It is a product of the partnership between the Francesco Paszkowski Design studio, the Ferretti Group’s Engineering Department and the Product Strategy Committee led by the engineer Piero Ferrari.

The design of the lines on the bottom and the hull helps it to replicate and build on the outstanding hydrodynamic performance of the latest models in the brand’s planing range.

“The Custom Line 106’ marks another step forward in the growth of the Ferretti Group brand dedicated to large fibreglass yachts. This vessel complements the Custom Line planing-hull selection, which comes together with the array of semi-displacing models to form a comprehensive range for owners who want sizeable spaces, cutting-edge technological solutions, style and comfort: in other words, Custom Line excellence,” stated Alberto Galassi, the Chief Executive Officer of the Ferretti Group. 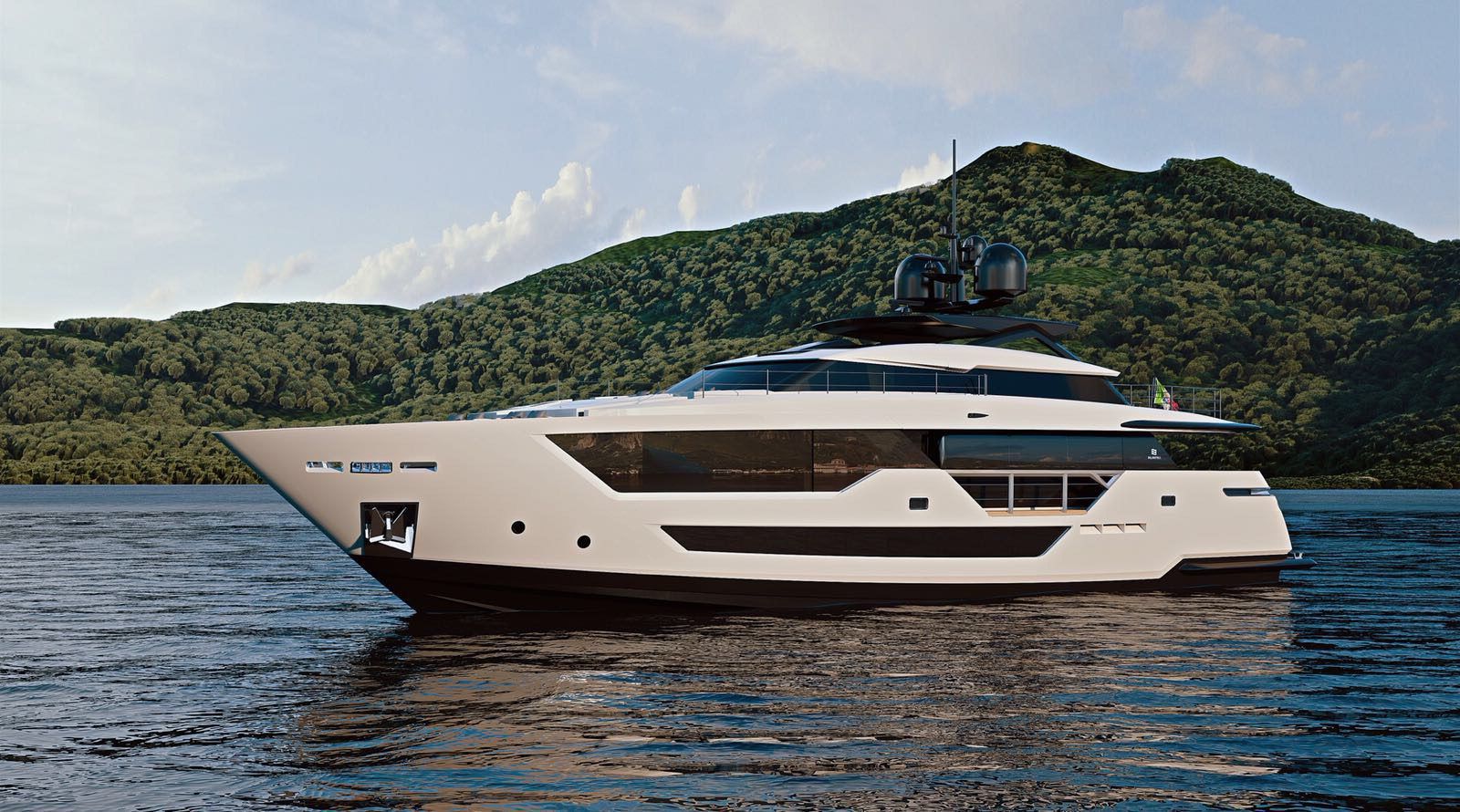 “In the design of the new 106’, a number of the brand’s distinctive features have been emphasised and new stylistic traits have been introduced. As is plain to see in various places, efforts have been made to break down the boundaries between the exterior and the interior.

The new technical solutions and all of the aspects of the exterior and interior lines are closely interlinked, as they are all parts of a single architectural arrangement with perfect balance between the forms and functions,” explained Francesco Paszkowski.

The new yacht has large floor surfaces that are all interconnected. To the stern is a more advanced version of the patented DMT – Dual Mode Transom system. It features two hatches that cover the stairs when the vessel is in motion, thus giving the stern an unbeatably clean-cut appearance. When the ship stops, they disappear into the central part of the door so that guests can climb up. From the garage, a tender of up to 5.45 metres and a three-person jet ski can be lowered into the water.

The forward area is even bigger than on other recent models: on the raised central island there are sofas and upholstered seating with reclining backrests and on the bow area there is a large sun pad spanning a total of 36 m2 (387 square feet). There is also an additional garage for a Williams 2.80 Jet or a three-person jet ski.

The forward area is directly connected to the 53 metre-square flybridge by a walkway. Protected by two large windows on the sides, it has a standard hard top with two skylights.

The interiors of the main deck are bathed in natural light thanks to the large, full-height windows.

Further along the starboard side, there is a full-beam master cabin in the foredeck. It is 6.50 metres wide and contains plenty of storage space for the owner, as well as two dressing rooms and a large bathroom with dual facilities and a central shower. On request, a panoramic terrace can be added.

The layout on the lower deck contains four standard cabins: two VIP cabins amidships and two twin ones forward, all with separate bathrooms. The beds in the VIP cabins face the bulwark to make the most of the view from the large hull windows, while an optional additional Pullman bed can be fitted in each of the two twin cabins.

The standard version is equipped with electro-hydraulic stabilizing fins, offering both underway and zero-speed modes. On request, gyroscopic stabilizers can also be fitted for maximum comfort at anchor.