Luxury cruiser manufacturer Maritimo's owner and founder Bill Barry-Cotter was so taken by the style and functionality of the sleek new S70 sedan cruiser his team produced for its New Zealand owners last year that had to have one himself.

Maritimo S70/02 will be finished in coming weeks and hold pride of place at this year’s Sanctuary Cove International Boat Show. Its proud owner can’t wait for it to hit the water.

The first S70 came into being after New Zealander’s Brian and Cathy Carran threw Maritimo the challenge of producing a true bluewater passage maker in a sedan version as opposed to its large flybridge motor cruisers. They had been on a worldwide search for their ideal retirement vessel and found it in a Maritimo cruising motor yacht, but they didn’t want a flybridge.

The finished S70 motor yacht was all its owners had wanted and much more and it caught the eye of the company’s owner.

“We worked in very closely with Brian and Cathy to design a motor yacht from the ground up which suited their personal needs and also had the very latest in design innovation and styling and the result was stunning,” said Maritimo CEO Garth Corbitt. 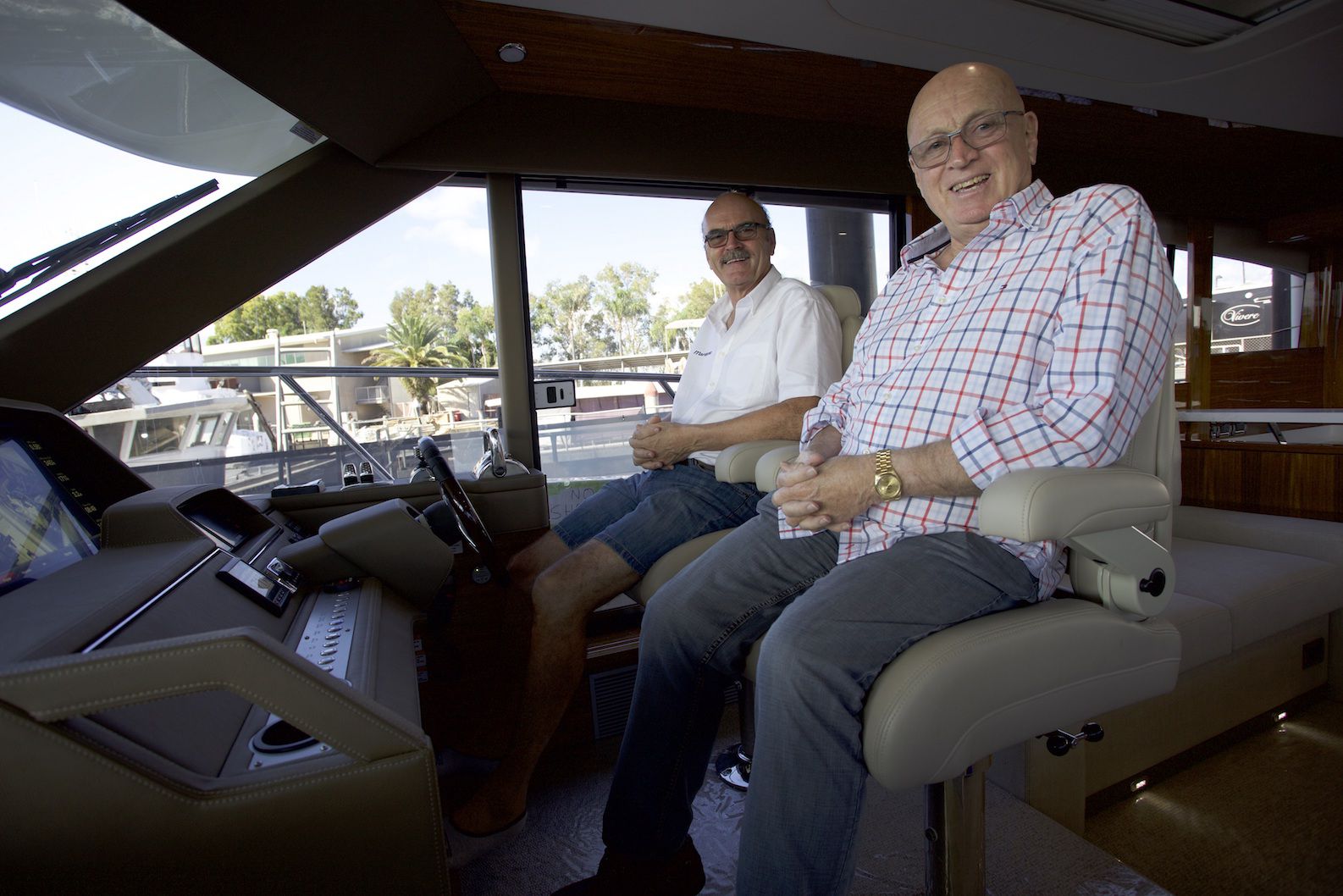 Maritimo's founder Bill Barry-Cotter (right) at the helm of the S70. 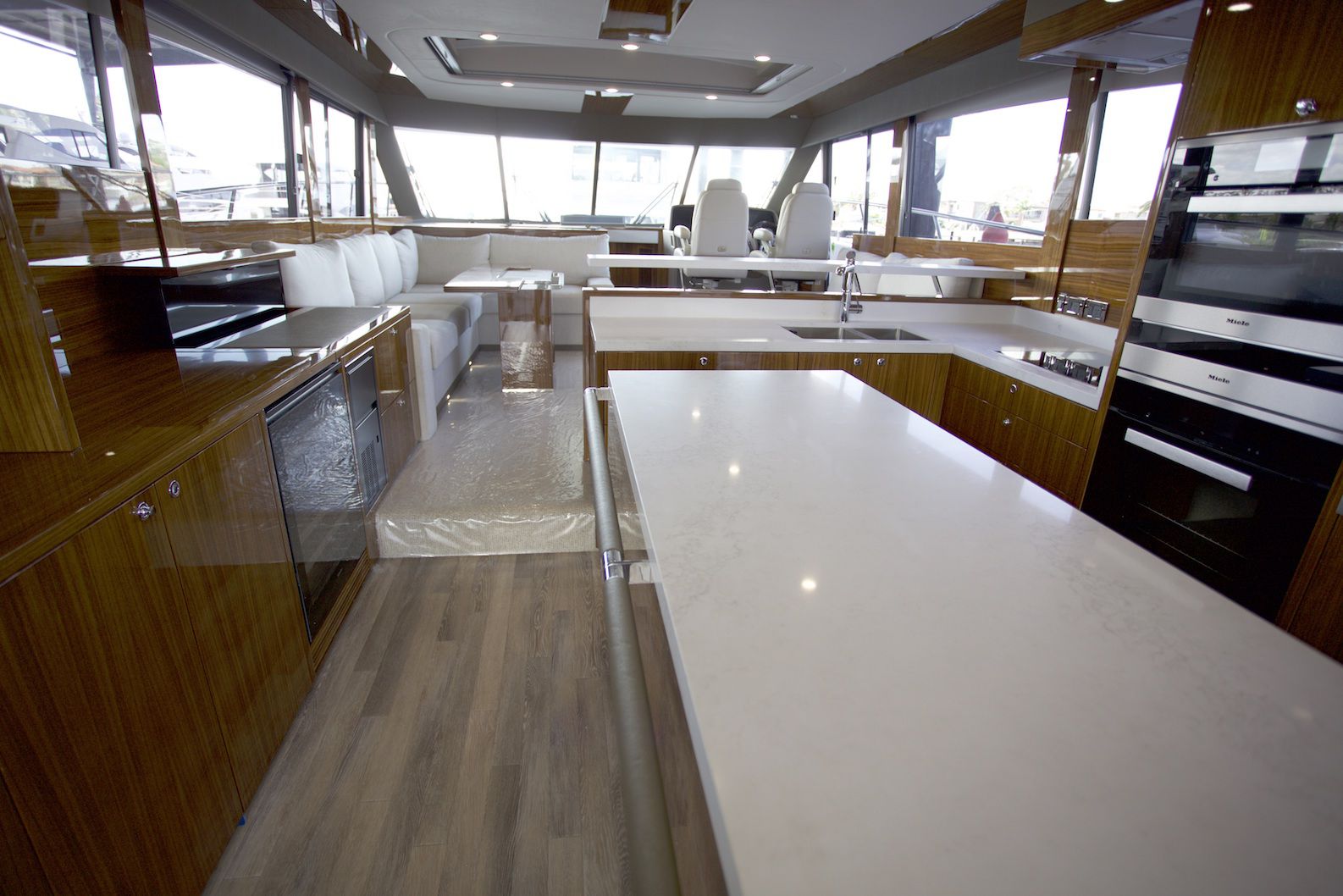 Interiors of the S70.

“They were very hands on in the design and build phase and as a team we were very proud of the final outcome which they were thrilled with.

“Bill was equally as impressed and decided an S70 would suit him and his family perfectly so we set about to design number two with a number of significant changes specifically for him.”

The vessel will be powered by a pair of Scania 1200 horsepower motors. Maritimo’s General Manager – Operations, Phil Candler, said in the full beam master suite the study desk and daybed have been swapped from one side to the other and stone flooring included in the ensuite bathroom.

More changes have been made in the saloon and entertaining area with a more stream lined flow on the port side and the position of the ice maker and the wine fridge shifted from the S70/01 layout.

“Overall the boat has refined ergonomics with elements like the dash design continuing a design evolution with cleaner flow and more stitching,” he said.

“The design evolution continues externally with the portholes all recessed into the hull to create cleaner lines and better protection from water flow giving it more of a mega yacht appearance.

“It is fair to say that the first S70 was stunning and the second one will raise the bar even higher.”

The S70 sedan will also be able to navigate under bridges enabling Barry-Cotter to access his waterfront property north of the Gold Coast’s Surfers Paradise.

Comprising four cabins the vessel can comfortably sleep seven and all heads will have stone flooring. It will have a 17 KVA  Cummins/Onan genset, hydraulic swim platform, bow/stern thrusters and Twin Disc EJS joystick system

Sea trials will be conducted on the Gold Coast later this month and it is anticipated that the second S70 will perform in line with its economic predecessor cruising at 25 knots at approximately 2000 rpm with a top speed of 30 knots at 2300  rpm.

The first S70 travelled from the Gold Coast to New Zealand in 100 hours late last year with the professional captain who piloted the vessel across the Tasman saying it was the best performing vessel he had even made the crossing in. It was his 50th crossing.

Maritimo’s International Sales and Marketing manager, Greg Haines, said the large sedan  model was generating interest on the world stage. “We think it will go very well in Europe and some parts of the USA,” he said. ” Having the owner, family and friends all on the one level makes for very social boating and the lower centre of gravity, compared to a traditional flybridge model, delivers exceptional seakeeping ability.”