Gavin Webb and his family plan on living life to the fullest, and Hamilton Island Race Week is just the tonic.

You don’t have to scratch far below the surface of the Hamilton Island Cruising classes at Hamilton Island Race Week to realise that it’s unwise to draw comparisons between the speed and performance of these boats with the bluewater experience of the owners and crew who sail them.

No better example can be found than aboard the Royal Queensland Yacht Squadron based Leopard 39 catamaran Living Life, which is racing in – and currently leading – Hamilton Island Multihull black division.

Living Life is an excellent cruising boat that can turn out a very credible performance on the racetrack when required, in fact the boat achieved a new top speed of 13 knots on the delivery to Hamilton Island, but its cruising pedigree belies the extensive racing experience of owner Gavin Webb.

Gavin started sailing in Townsville as a seven year old racing Sabots with his brother, soon turning in championship performances before moving on to 16ft skiffs, 505s and Etchells, teaching sailing and also racing yachts. 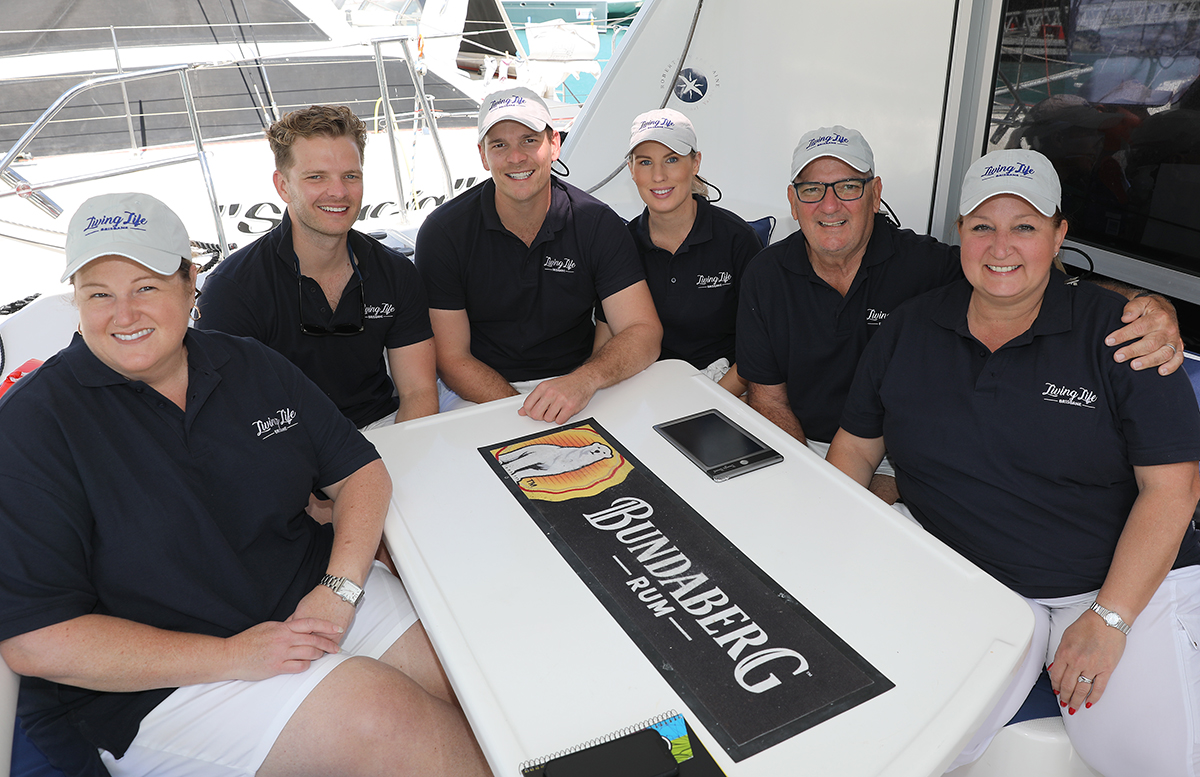 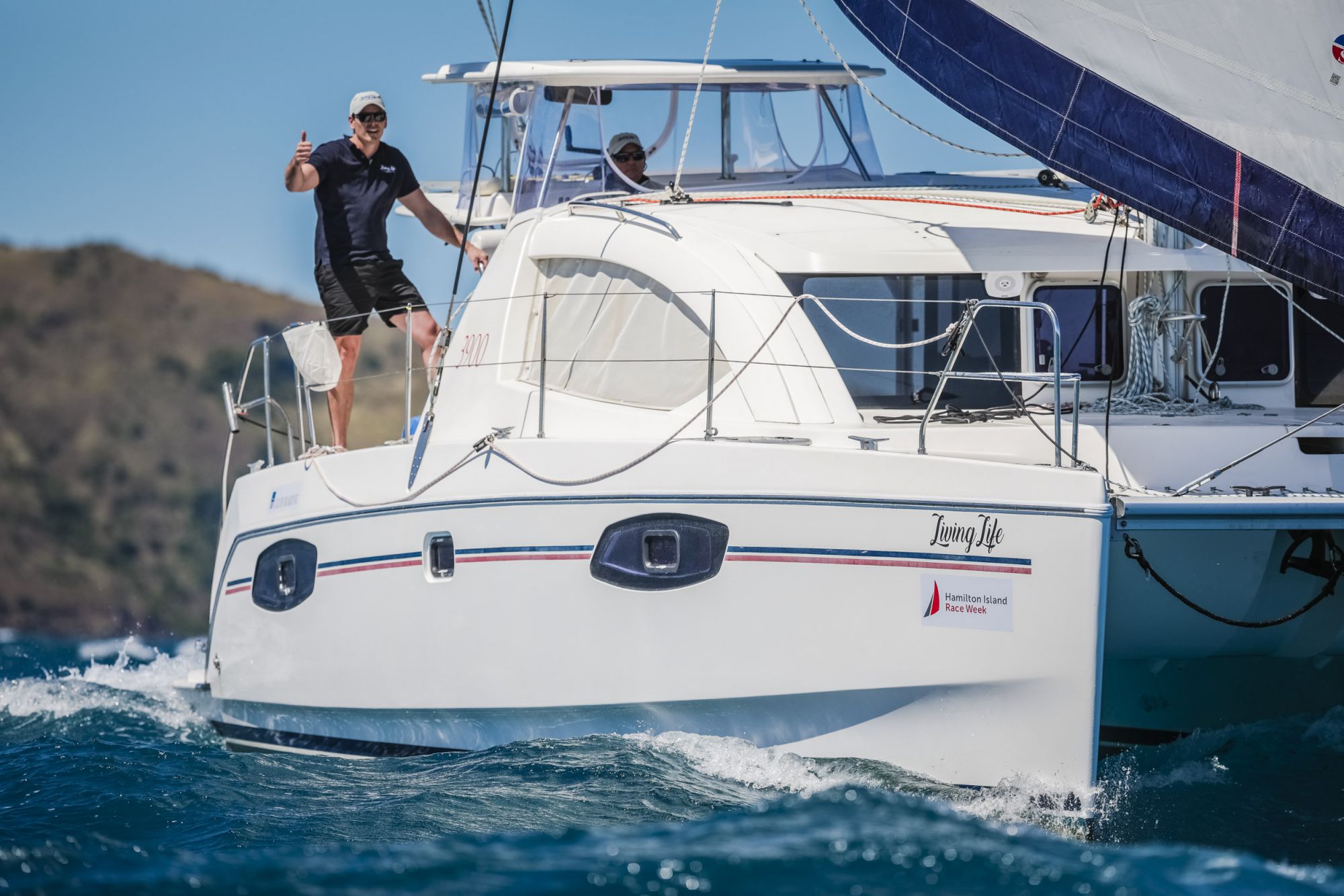 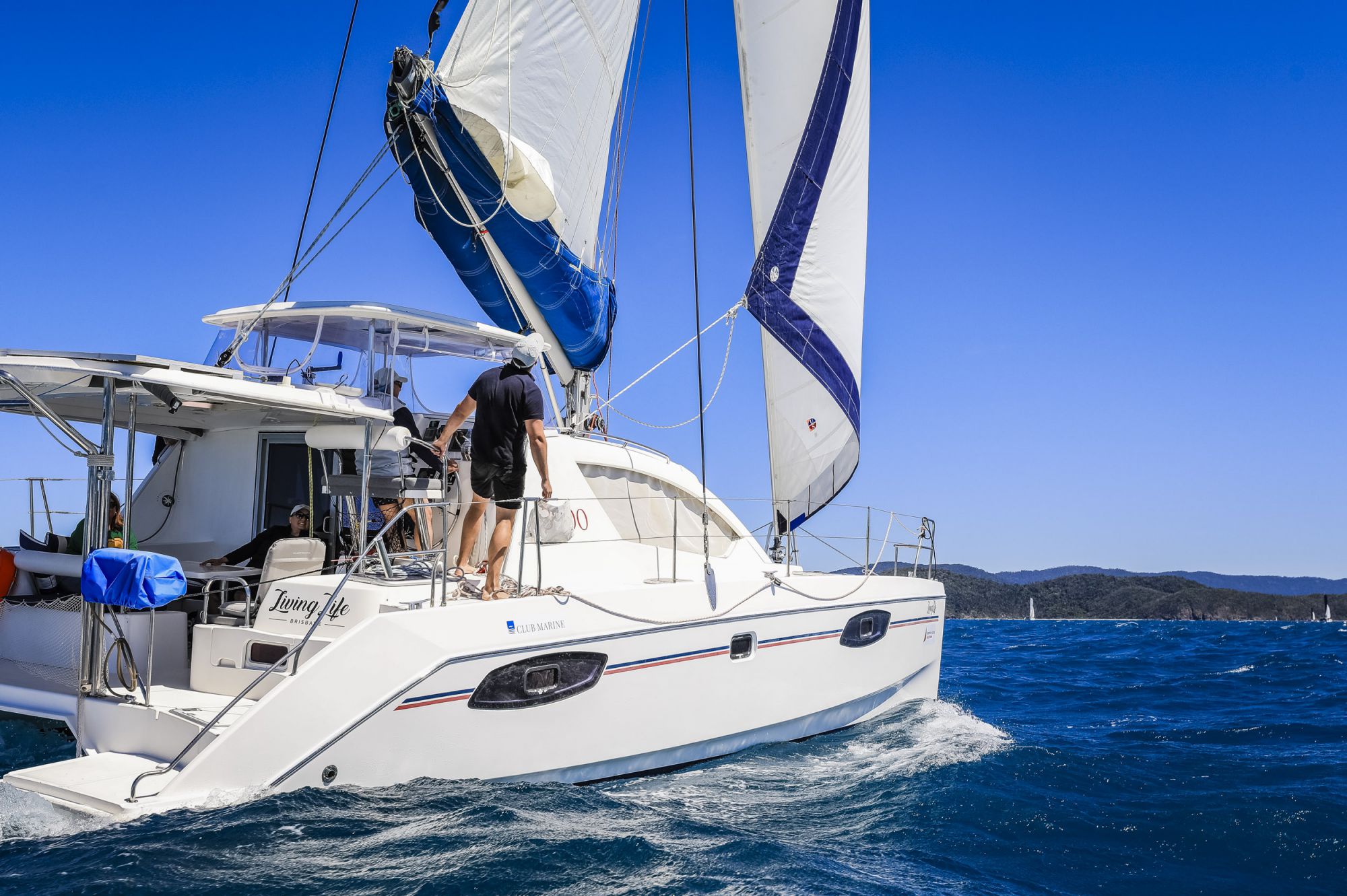 While Gavin’s two sons, Jared and Bryce, both sailed dinghies at a young age they ended up becoming competitive swimmers. Along with Gavin’s wife Rebecca, Bryce’s partner Bec and family friend Leanda they have a very particular reason to be sailing with Gavin at Race Week.

In 2017 Gavin was diagnosed with Motor Neurone Disease (MND), a degenerative disease that sees two people being diagnosed and two people dying every day in Australia.

The first effects of MND vary greatly from one person to the next and for Gavin the initial phase has resulted in the loss of his voice. Instead, he uses a digital pad to communicate – and very quickly too.

“He’s fast with his pad, but we end up trying to predict what he’s going to say before he’s finished” jests Jared. “We’re getting pretty good at that, but we can never guess numbers!

If the old sailing adage ‘a quiet boat is a fast boat’ is anything to go by then it’s unsurprising that Living Life is leading her division after three races, with all communications from the self-dubbed ‘silent skipper’ made by hand signals from his elevated steering position to Bryce, who trims and relays the messages forward to Jared on the bow.

Faced with a terminal disease, Gavin is very clear about what matters to him most in life, scribbling one word on his pad… ‘fun!’

And fun seems very much in evidence aboard the ‘floating hotel’ (as the 12-tonne multihull was nicknamed at Airlie Beach Race Week), combining some impressive results with plenty of creature comforts.

With his arm movements becoming progressively more limited in range, Gavin expects he has another six months of fun sailing aboard Living Life, so he’s leaving the boat in the Whitsundays after Race Week for a couple of months and will fly up with his family from their Brisbane home to cruise the boat as much as they can.

Despite the tough circumstances in which they find themselves, Gavin Webb and his family continue to honour the name of their boat and living life…..to the full.