SailGP, a brand new global grand prix sailing series, has been unveiled at a spectacular launch in London.

Harnessing the raw speed of the wing mast foiling cats which stole the show at the last America’s Cup, the league will bring intense, competitive, inshore racing to fans at iconic sailing venues around the world, kicking off in Sydney in February 2019.

The league, which has been in development for over a year, will be backed by Larry Ellison, the Founder of Oracle Team USA. Ellison’s commitment has ensured SailGP will properly structured and supported, and a US$1 million prize purse makes the event one of the richest anywhere in professional sport.

The SailGP teams will represent six countries: Australia, China, France, Great Britain, Japan and the United States. The five-person Australian crew will be announced on 15 October. Former Oracle Team USA tactician and Olympic gold medallist Tom Slingsby is believed to have been selected as skipper of the Australian team.

The boats themselves, known as the F50 Class, are a redesigned, supercharged incarnation of the exceptional AC50 used for the 35th America’s Cup in Bermuda. 12 months in development at the hands of pioneering technicians and engineers at Core Builders Composites in New Zealand, the F50s are expected to break the 50-knot (60mph/100kph) barrier. 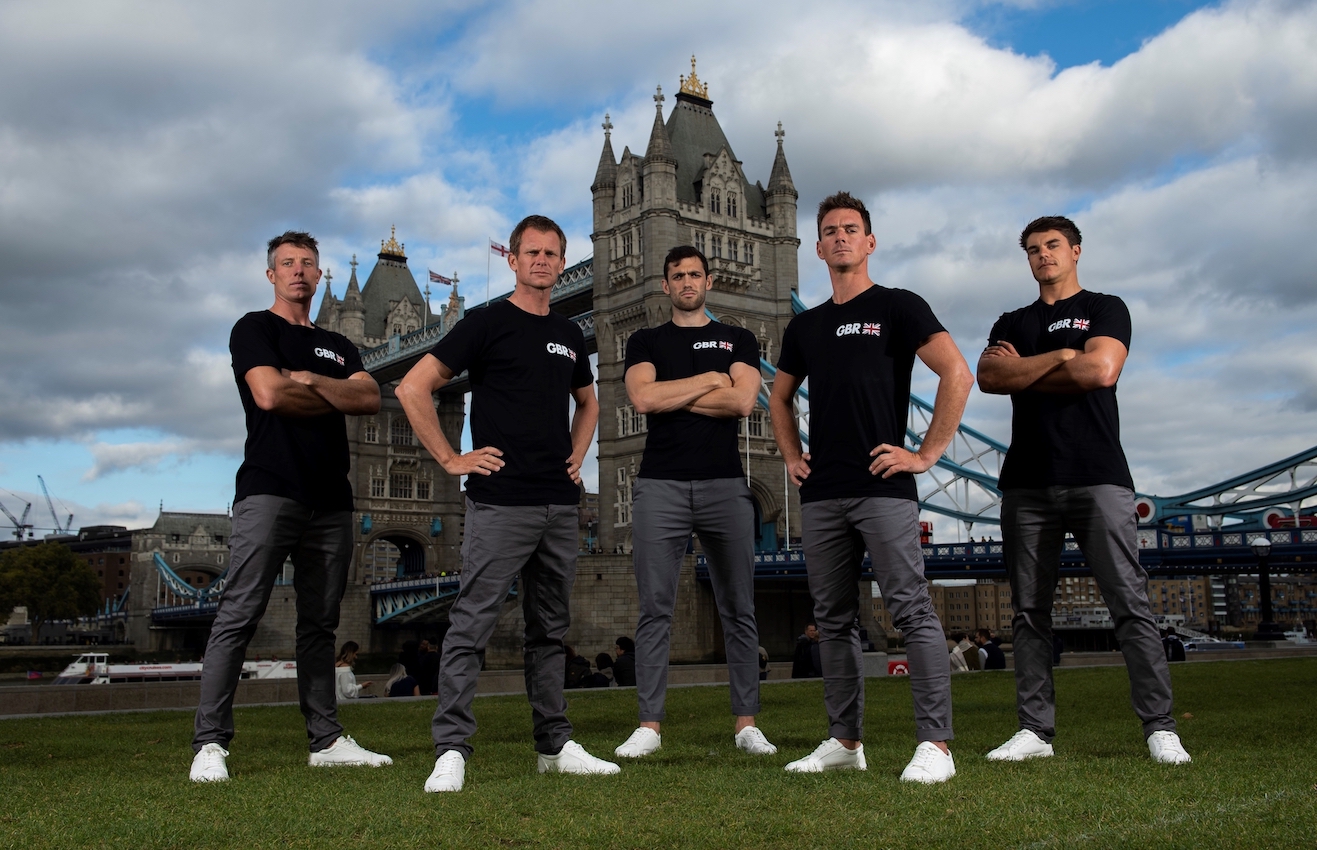 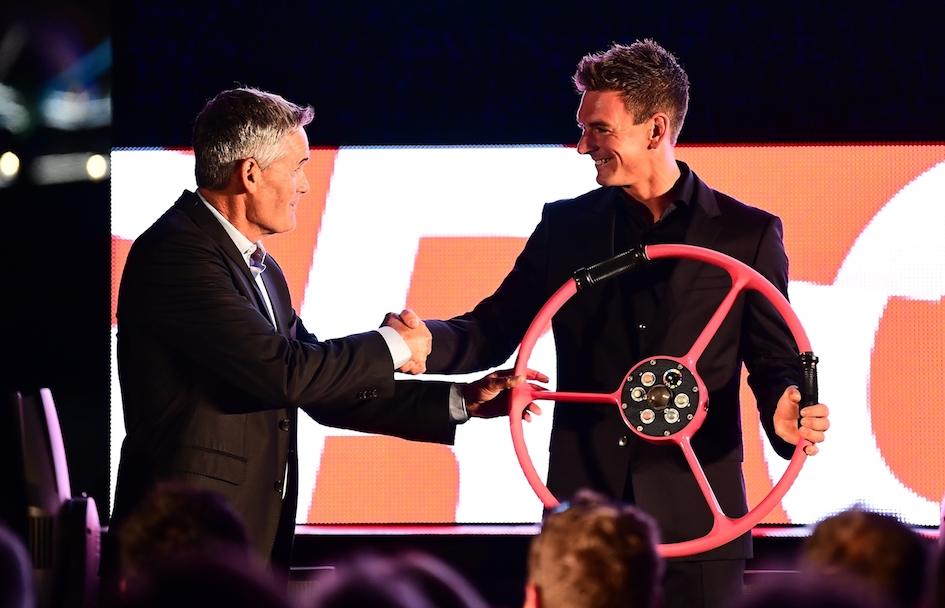 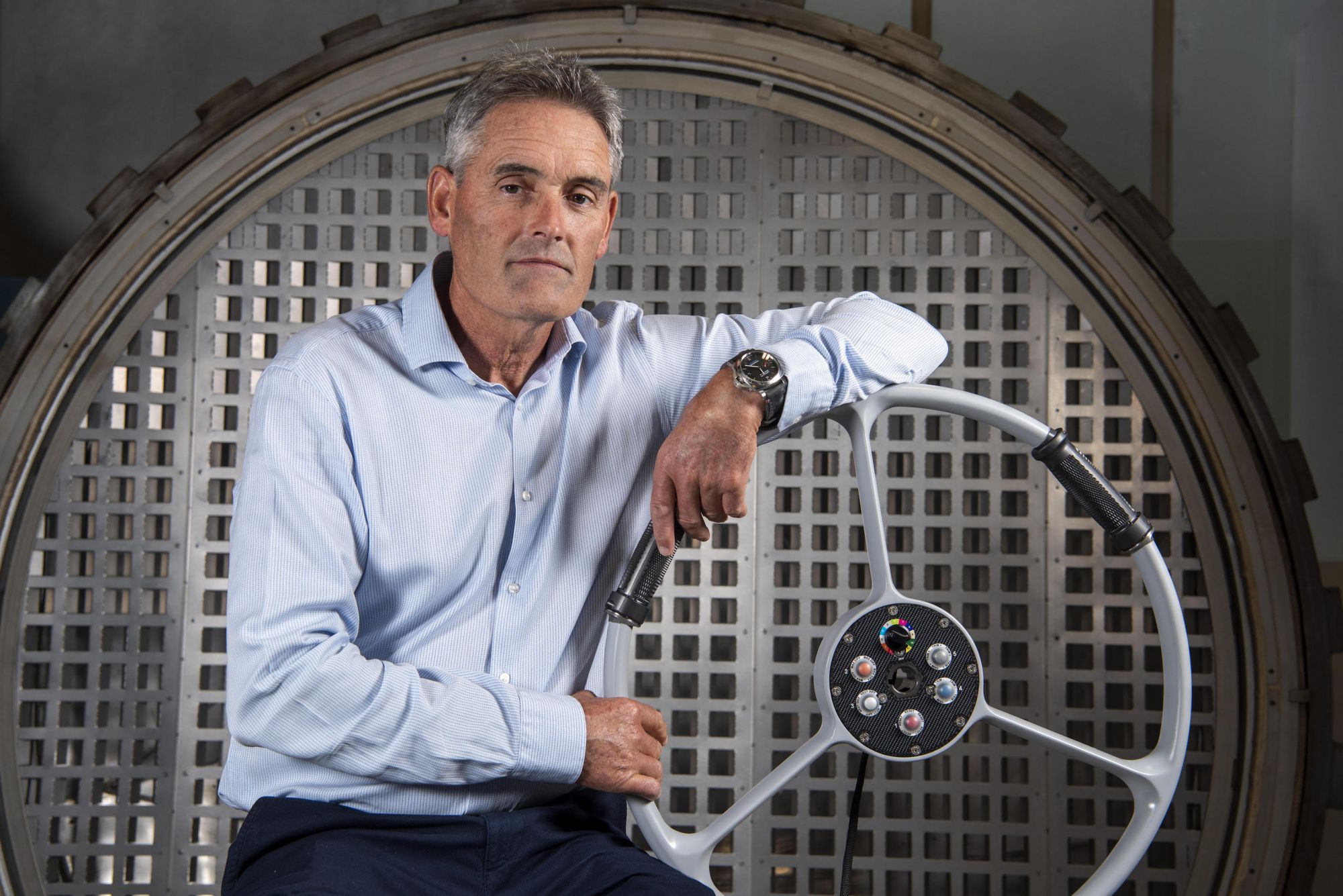 Russell Coutts and Iain Murray will bring a proven track record of successful big-event management to the SailGP league. 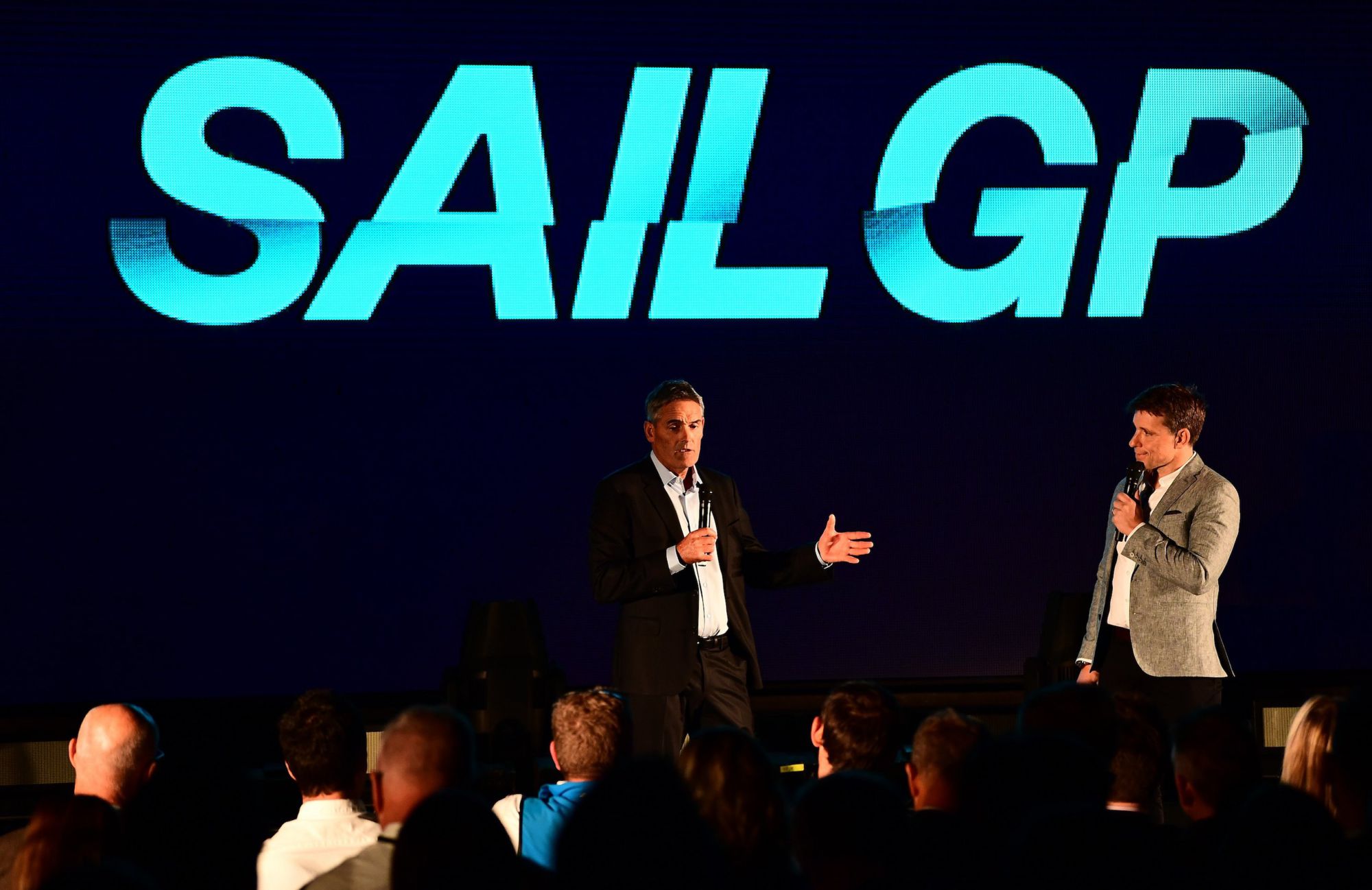 Sir Russell Coutts and Ben Shephard on stage during the launch of SailGP. 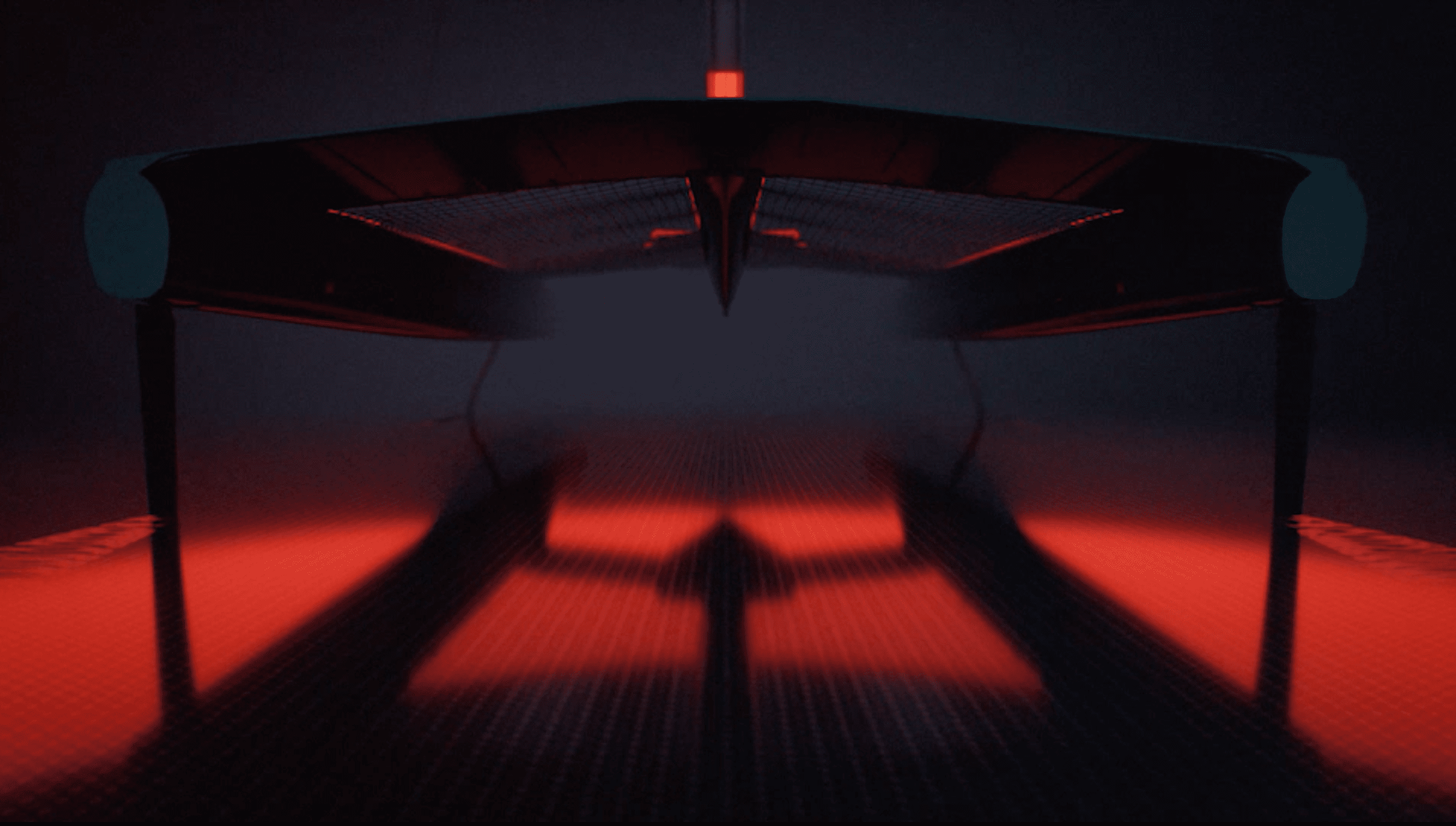 “SailGP is the evolution of sailing,” said Ellison, SailGP founder. “With equally incredible technology across our one-design fleet, we expect to see thrillingly close and competitive racing amongst national teams. And, with a modern, consistent format, SailGP will provide a new opportunity for talented sailors who want to race for their countries.”

Russell Coutts, the most successful sailor in the history of the America’s Cup, will take on the responsibility of the league’s CEO.

“SailGP distills all of the most successful, exciting and relevant elements of high-performance, professional racing, while adding the extra edge that comes with nation-versus-nation competition,” said Coutts.

“We are aiming to be pioneers of new technologies, boat design, commercial partnerships and global audience engagement. But with every crew on the same groundbreaking F50 catamaran, this isn’t a tech arms race, rather the ultimate test to establish the best sailing team in advanced foiling catamarans,” he added.

Supported by World Sailing, each Grand Prix will comprise two competition days with five fleet races, culminating in a final match race between the two leaders. After SailGP’s Sydney inauguration in February (15-16), the league moves on to San Francisco in May (4-5), New York in June (21-22), and Cowes in August (10-11), before the Marseille final in September (20-22), which features a winner-takes-all, US$1 million championship match race between the season’s top two teams to conclude three days of racing.

“World Sailing is thrilled to be working with SailGP to bring a new, exciting and fan-friendly elite racing league to life,” said World Sailing CEO Andy Hunt. “SailGP is an ambitious project that is spearheaded by an incredible forward-thinking leadership team. We’re excited about SailGP’s commitment to innovate and advance the sport forward, and by working in partnership, we will aim to inspire millions more people to fall in love with sailing.”

SailGP was created by Ellison and Coutts, who have been instrumental in the commercial development of competitive sailing. The innovative new professional sailing league – featuring an ongoing calendar of premium global racing among national teams in the world’s most advanced catamarans – will engage the next generation of fans and create a pathway for future sailors. SailGP will be a commercially driven sports property, eventually maturing to a franchise model.

With a primary goal of growing global viewership and broadening its fanbase, SailGP’s broadcast plans focus on comprehensive live coverage complemented by centrally produced highlight programs, and cutting-edge screen applications and services. Whisper Films has been retained as the league’s production partner and will play a key role in delivering a personality-driven broadcast using patented and leading-edge immersive media technologies, while Talisman Sports and Media is handling global media rights distribution.

“The concept of SailGP immediately excited me,” said Great Britain helmsman Dylan Fletcher. “This league allows us to compete with and against the best, and to challenge ourselves in every way possible while sailing the world’s fastest catamarans. We have the opportunity to push the limits of our sport, and this is a very proud chapter in my career. What Larry and Russell have created is truly unique, and I am confident it will capture the attention of audiences around the world.”

The launch event took place at Tower Bridge in London. Following the formal program hosted by ITV’s Ben Shephard and featuring addresses by Ellison, Coutts, Hunt and members of the Great Britain SailGP Team, a visual and sensory display on the Thames’ South Bank provided a first look at what SailGP will bring to audiences around the world.

SailGP is sailing redefined. Established in 2018 and headquartered in London and San Francisco, SailGP is an annual, global sports league featuring bold, cutting-edge technology and awe-inspiring athleticism. The fan-centric, inshore racing takes place in some of the most iconic harbors around the globe and culminates with a US$1 million winner-takes-all match race. Rival national teams from Australia, China, France, Great Britain, Japan and the United States battle it out in identical supercharged F50 catamarans, engineered for intense racing at electrifying speeds exceeding 50 knots (nearly 60 mph/100 kph).

Kicking off in February 2019, SailGP’s inaugural season will feature teams representing six countries: Australia, China, France, Great Britain, Japan and the United States. Each five-person crew will race on identical 50-foot foiling catamarans. A new boat class, the F50 is a superfast cat, a redesigned, supercharged incarnation of the exceptional AC50 used for the 35th America’s Cup last year. 12 months in development at the hands of pioneering technicians and engineers at Core Builders Composites in New Zealand, the F50s are expected to break the 50-knot (60mph/100kph) barrier.

According to the organisers it will usher-in a new level of spectator involvement and was created to engage fans’ interest in a year-round supercharged, fast-paced version of sailing, aimed at increasing the sport’s mainstream popularity, introducing the next generation of athletes to the sport and creating a career path for extraordinary athletes.

Each F50 team boat is equal in its top-flight technology, allowing sailors to compete on an even playing field.

The sailing league will take place in five locations around the world, kicking off with the first no holds barred drag race on Sydney Harbour in February 2019. Australia will set the stage for the rest of the host cities including San Francisco (US), New York (US), Cowes (UK), Marseille (France).

Rival national teams will battle it out in identical supercharged F50 catamarans, engineered for intense racing at electrifying speeds exceeding 50 knots (nearly 60mph/100kph). Nations with a team in the inaugural SailGP league include Australia, China, France, Great Britain, Japan and the United States.

The Australian team will be announced in mid-October in Sydney.

SailGP will utilise short-format, inshore stadium racing. Each grand prix will include two competition days, featuring a total of five fleet racing leading to a final match race between the two leaders.

Points will be accumulated in each race throughout the season, culminating with a final match race between the top two teams for the SailGP Championship, with a US$1 million purse and trophy presented to the winning team.

SailGP racing is sanctioned by World Sailing, and boasts an internationally acclaimed race management team headed by CEO Russell Coutts, one of the most accomplished sailors of all time and former CEO of the 35th America’s Cup Event Authority.

In addition to Coutts, Iain Murray, Olympian and former America’s Cup helmsman, is SailGP’s Regatta Director and Richard Slater, one of the world’s top international judges and vice chairman of the World Sailing Racing Rules Committee, is serving as chief umpire and chairman of racing rules. In addition to relying on its sailing experts, SailGP will harness the very latest electronic race management and remote umpiring to ensure consistency, fairness and safety.

While the majority of SailGP teams will be fully comprised of athletes native to the country they are representing, select countries without the experience necessary to safely and competitively power the F50 boats will be provided a pathway to build to 100 percent nationality.

In season one, China and Japan will be designated as developing teams, and will start with a 40 percent nationality requirement, which will increase by 20 percent annually.

On the individual side, the nationality rules will be narrow, and sailors will not be eligible to compete for more than one country, with a variety of criteria required to satisfy nationality requirements.

Wrangling these speed machines on the confines of a technically demanding harbour course won’t be easy, and the organisers say the sailors’ safety is the league’s top priority. The boats are engineered, and the competition is formatted for fast-paced, intense racing. But SailGP is also claiming to set new safety standards, with the latest technology and clothing, equipment and training all geared toward keeping its stars safe.

SailGP has appointed Whisper Films as its global production partner to deliver  programming to broadcast rights holders throughout the world. With a goal of widening appeal and growing viewership, SailGP broadcasts will highlight personality-driven content, and enhanced pre- and post-race analysis. Programming will feature an augmented version of the LiveLineTM technology that to greatly enrich the viewer experience.

By season two, SailGP says it will launch global youth sailing programs to leave a sporting legacy in each market. The youth programs will provide opportunities for young sailors to develop via school programs and yacht clubs, creating a pathway to professional racing.

Core Builders Composites in Auckland are building or converting AC-50s to be used on the SailGP circuit. For fans of fast sailing action February 2019 can’t come soon enough.