Despite ominous skies and some rain, the three day event, rescheduled to mid-March, attracted 23,000 visitors and yielded excellent sales for exhibitors.

Organisers report record sales and leads, excellent feedback from exhibitors and sponsors and significant economic benefits that promise to energise the marine industry for many weeks and months ahead.

Over 23,000 visitors from around Australia and the world streamed through the gates for a massive $150 million showcase this year staged for the first time over three days in March.

“The majority of our visitors are experienced boaters but there were also many families who are completely new to boating who were able to experience everything from free sailing and waterskiing lessons to fishing demonstrations, boat-building factory tours and even no-obligation sea trials with The Mercury Edge,” she said.

“It’s very gratifying to play a part in helping those families to experience and enjoy all the rewards of the boating life.” 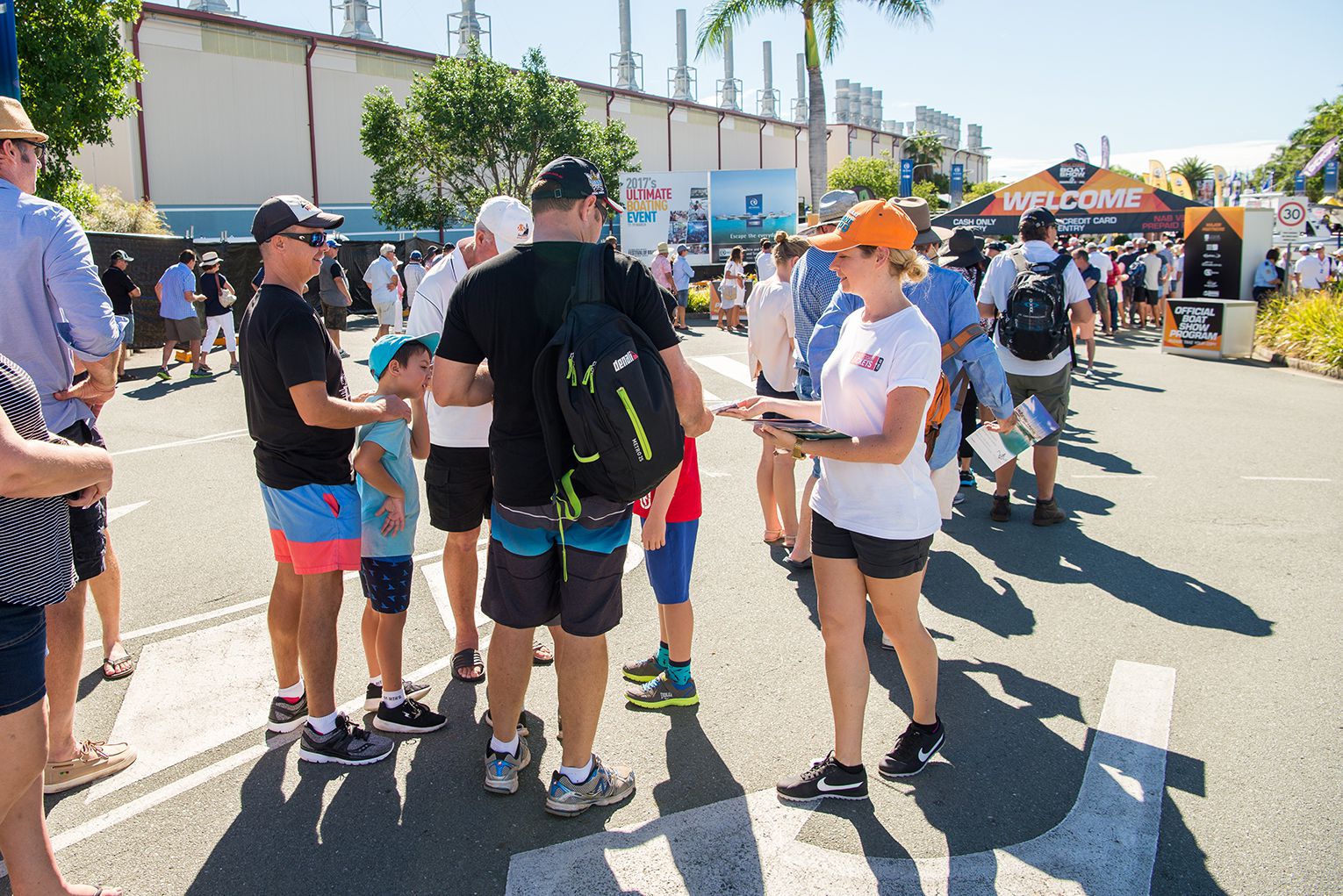 Crowds lined up each day to 'see it first' at the GC Show. 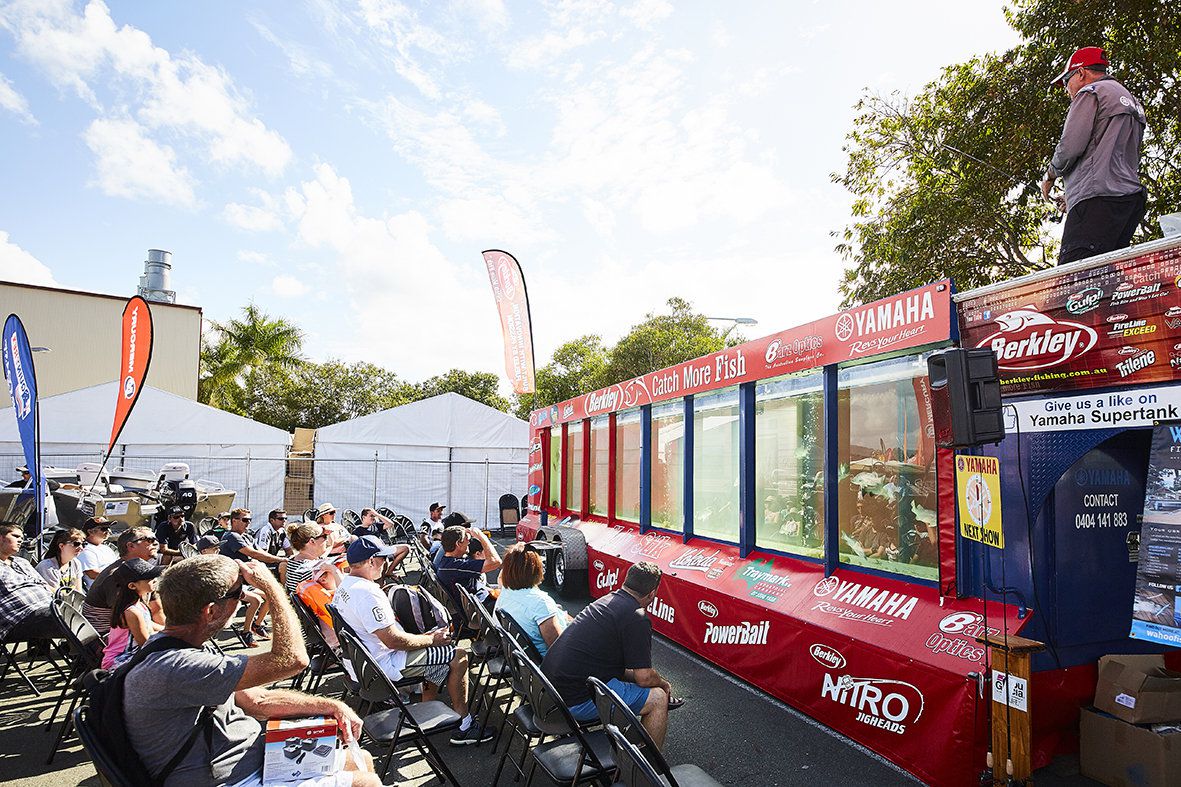 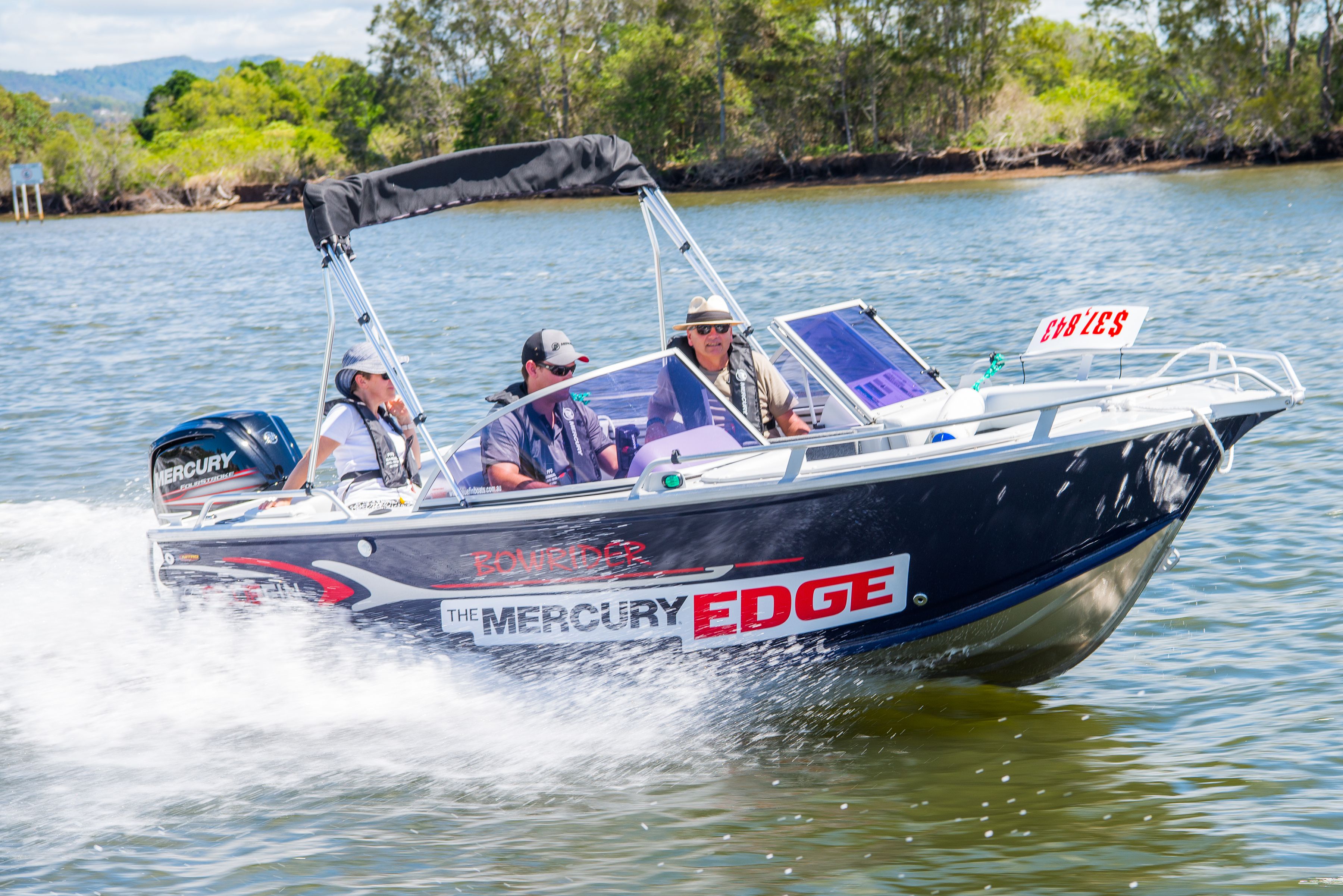 Taking to the water was all part of the hands-on experience at the GC Show.

Mrs Brown said confirmed sales as a direct result of Australia’s first major boat show of the year are extremely strong and will tally well into the tens of millions of dollars.

“We’ve absolutely eclipsed all our previous records – visitor numbers, sales at the show, the number of boats on display, exhibitor numbers and our massive Fleet of Firsts for product and boat premieres.

“Our new marina link was another significant step forward. Everyone just loved the way it opened up the entire waterfront along the Coomera River. “In so many respects, 2017 really has been a turning point for our boat show and for our marine industry – it’s fantastic.”

Mrs Brown said the Gold Coast boat show’s record 230 exhibitors on the water and on land all reported strong sales results. “Friday and Saturday were both significantly up on last year’s visitation, even Sunday with its showers and late storm eclipsed last year’s attendance,” she said.

“The overall show visitation number was up 18 per cent and that is very rewarding given this year we packaged the boat show into three days from four in response to exhibitor feedback.

“We already have a significant number of new exhibitors who want to be here next year, and many existing exhibitors have expressed their desire to take even more space.

“The 2018 Gold Coast International Boat Show will be massive.”

The show’s 2017 exhibitors are now busily following up and finalising even further sales from the quality levels of enquiry across the board.

“Our exhibitors are buoyed by the support of the boating community and they are now actively converting leads generated at the show into confirmed sales,” said Mrs Brown.

“Most exhibitors are honouring their boat show specials until the end of this week to help get families out on the water having fun in time for Easter. 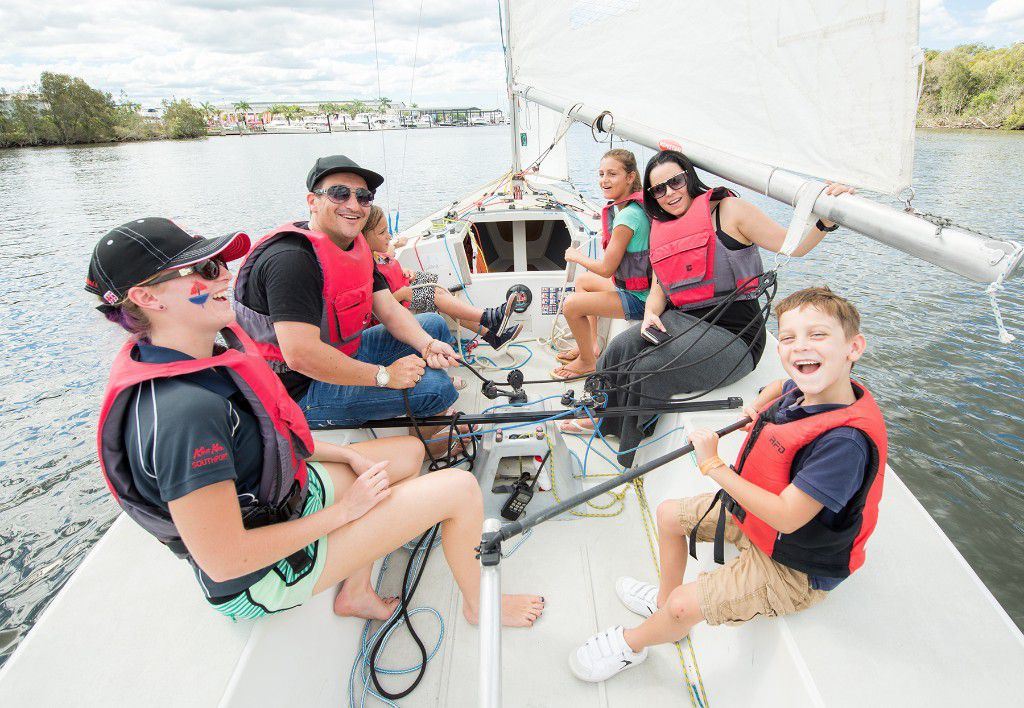 “There’s also the significant economic flow-on for the Gold Coast and for Queensland – in fact for Australia,” she said.

“Visitors have come here from interstate and internationally specifically for our boat show and while they are here they spend money on accommodation, dining and on having fun.”

“The marine industry professionals who attended our show – this year supported by the Boating Industry Association – are the best in the boating business and it’s so rewarding to be able to play a role in their growth,” she said.

Howard Glenn, national CEO of the Boating Industry Association – this year a delivery partner of the Gold Coast boat show – said the “industry legends” that created and supported the show should be very proud of its success.

“It’s a fantastic story of co-operation,” he said.

“Many of these marine industry leaders are in competition with each other but they put that aside for the greater good of our industry and for the benefit of the 30,000 people who work in the Australian marine industry.

“That truly is an inspiration.”

Crowds enjoyed the diverse displays on land and water.

Grant Amor from Aqualuma LED lighting said the Gold Coast International Boat Show on its new dates in March was far stronger than even he expected. “We came to the show to support the new dates and to support the industry,” he said.

“I was genuinely surprised at the strength of the show – I spoke with more boating people over the weekend than I spoke with at Miami International Boat Show in Florida. “It was a very pleasing result and we will definitely be back next year.”

Andy Taylor from AMT Marine said there was significant interest in the Whitehaven 6000 Coupe which was displayed at the Coomera show for the first time. “This particular boat was sold prior to the show but we have some excellent qualified leads to follow up,” he said. “It’s gone so well that next year we will be back here with more boats.”

Todd Holzapfel from Great Southern Marine said the quality of enquiries on the Grand Banks on display was very encouraging. “To be honest, in the luxury market it’s rare to conclude a sale at any boat show but it’s all about generating the leads and then following up with sea trials,” he said.

“We are very pleased with how it’s gone for us.”

Rowan McMahon from The Multihull Group said over 600 people stepped aboard the Lagoon 450S throughout the three days. “The show was great,” he said. “We had some solid people come through and we will be making some sales in the very near future, some in the not-too-distant future and some even further down the track.” 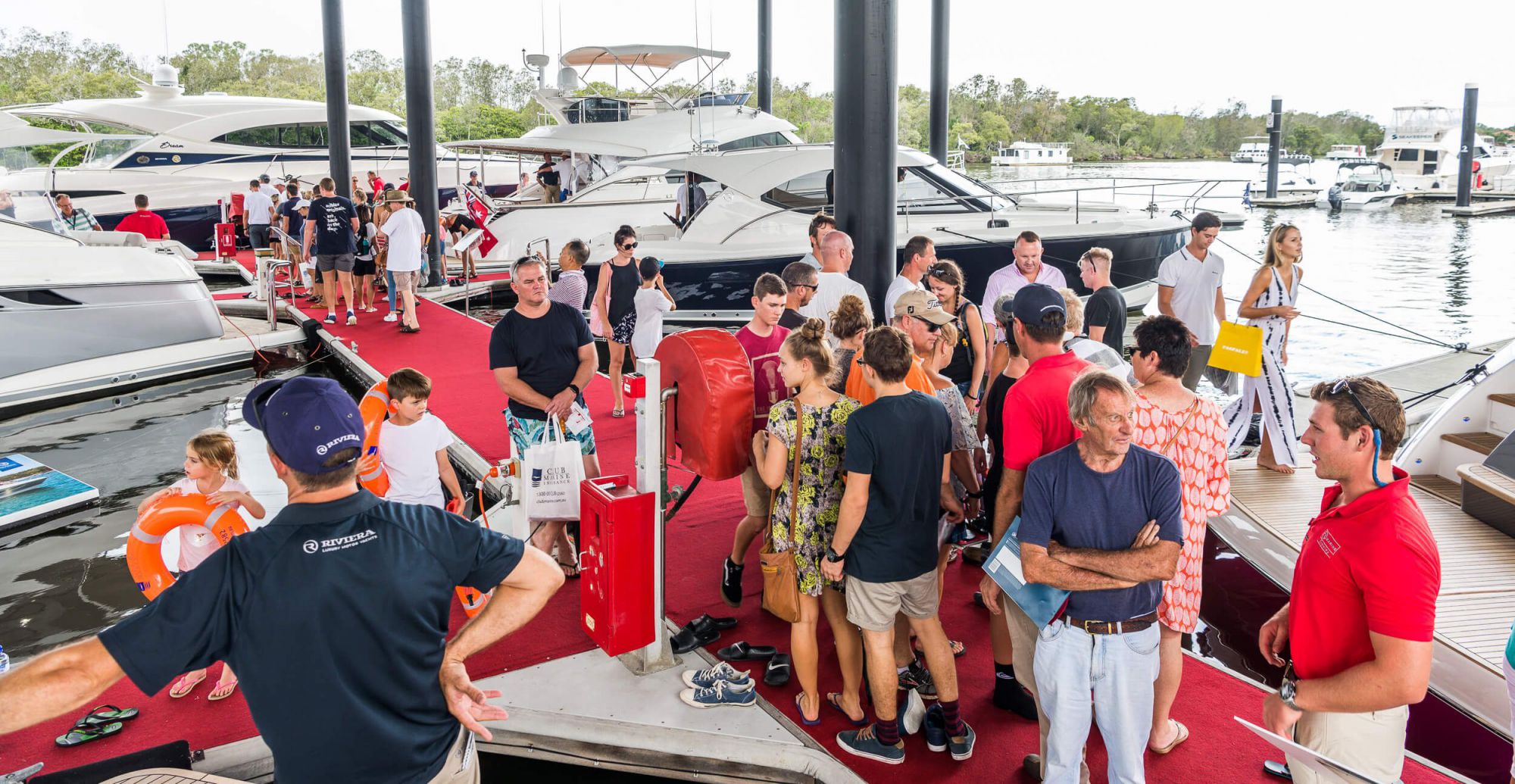 At Riviera, owners and aspiring boaties marveled at the host of new models.

Riviera chairman and owner Rodney Longhurst said it was exciting to be a part of a boat show where the marine industry works together to deliver Queensland’s biggest boat show.

“For us at Riviera, it’s a wonderful opportunity to bring the Riviera Family together for an fantastic weekend of boating education, inspiration and celebration,” he said.

“Considering the uncertainty of the weather, we are very happy and it was a successful show with a very strong result,” he said.

Stefan Ackerie said Stefan Boating World sold over $1 million in boats at the show and at his massive showroom, which is also located within the Gold Coast Marine Precinct at Coomera.

“We are very, very pleased with the result,” he said. “At the show, the buyers were simply captivated by the designs and then over at the showroom, we sold several bigger boats..

Dylan Lopez from Sirocco Marine North reported very strong sales of his range of inflatable tenders from 2.2 meters to 7.8 meters.

“Things have gone so well that we will take a lot more space next year – we’ve made sales to existing customers and new customers, and the business-to-business networking has been incredible too.

“The new dates in March have certainly worked and they have drawn a lot of people from interstate here to the Gold Coast for the first Australian boat show of the year.”