Luna Rossa Prada Pirelli goes through to the Prada Cup Final ahead of what is set to be a thrilling encounter with INEOS Team UK.

Luna Rossa Prada Pirelli finally got the redemption they were looking for and, scoring four points in a row, win the Prada Cup Semi-Final.

The Italians started firmly in the driver’s seat ahead of today’s races and needed only two more wins to claim a place in the Prada Cup Final against INEOS Team UK.

The Americans, who had already won their race against time after their AC75 almost sunk less than two weeks ago, had to find some magic to bring Patriot back to the performances she had before. They had to win at least one match to keep their Semi-Final alive.

But the Italians won the starts and were just faster, steadier and more confident. Without any real pressure, they didn’t make any mistakes and sailed to two easy wins.

Light winds forecast proved wrong and stable breeze from northeast between 11–14 knots allowed the Race Committee to start both races right on time on Course A.

Prada Cup Semi-Final Day 2 Round Up.

No-one needed any convincing as to how important today’s racing was. The pressure was on and if there was a lesson to be learned from yesterday’s racing for the Americans it was that they had to win, or at least be even at the start.

When American Magic delivered a different approach to the pre-start, lining up to leeward of Luna Rossa as both boats headed in toward the start, the Americans appeared to have set themselves up for a stronger start.

In the event it was even, American Magic at the pin end, Luna Rossa at the committee boat end, from here it was a drag race to the boundary.

Once there, both boats tacked onto port simultaneously and lined up for another straight line duel, this time toward the right-hand boundary. But sitting just to windward and astern of the Italians put the Americans in dirty air, a position they struggled to maintain and a few minutes later they were forced to tack off. This was the first evidence of what would turn out to be a pattern of strong defensive play by Luna Rossa.

By the first gate, Luna Rossa was 13 seconds ahead. By the bottom of the first downwind leg, they had squeezed a few more seconds out to lead by 22 secs. While there was now a physical distance of around 300 metres between the two, it was clear that Luna Rossa was taking nothing for granted, tacking to cover each time American Magic tried to break free.

Keeping the foot on the throat before they tacked yet again to cover their opponents, picking the side of the course that they wanted and controlling the situation, this was textbook match racing from the Italians.

By Gate 3 they had stretched out more distance to lead by 41 seconds, the race looked like it was only going one way. And yet by Gate 4, American Magic had pulled the gap down to 18 seconds. Could they claw back from here?

By the top gate for the last time, the answer was no. Luna Rossa was the faster boat upwind and while Patriot seemed quicker downwind, it was not enough for the Americans to pull themselves back into the race.

By the end, Luna Rossa crossed the finish line 35 seconds ahead. They had sailed another perfect race. One more victory and they would be on for the Prada Cup final. Could they smell victory? 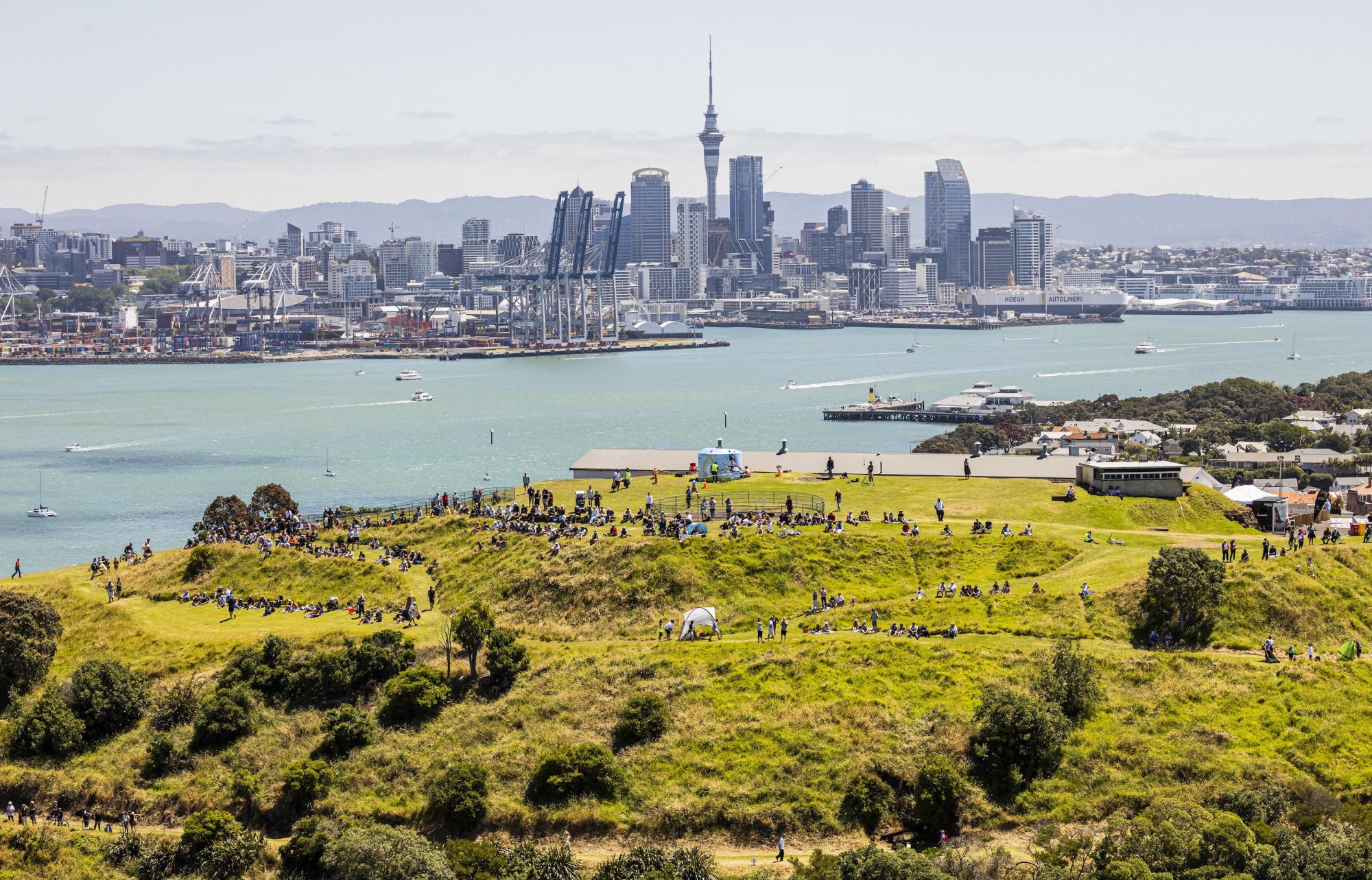 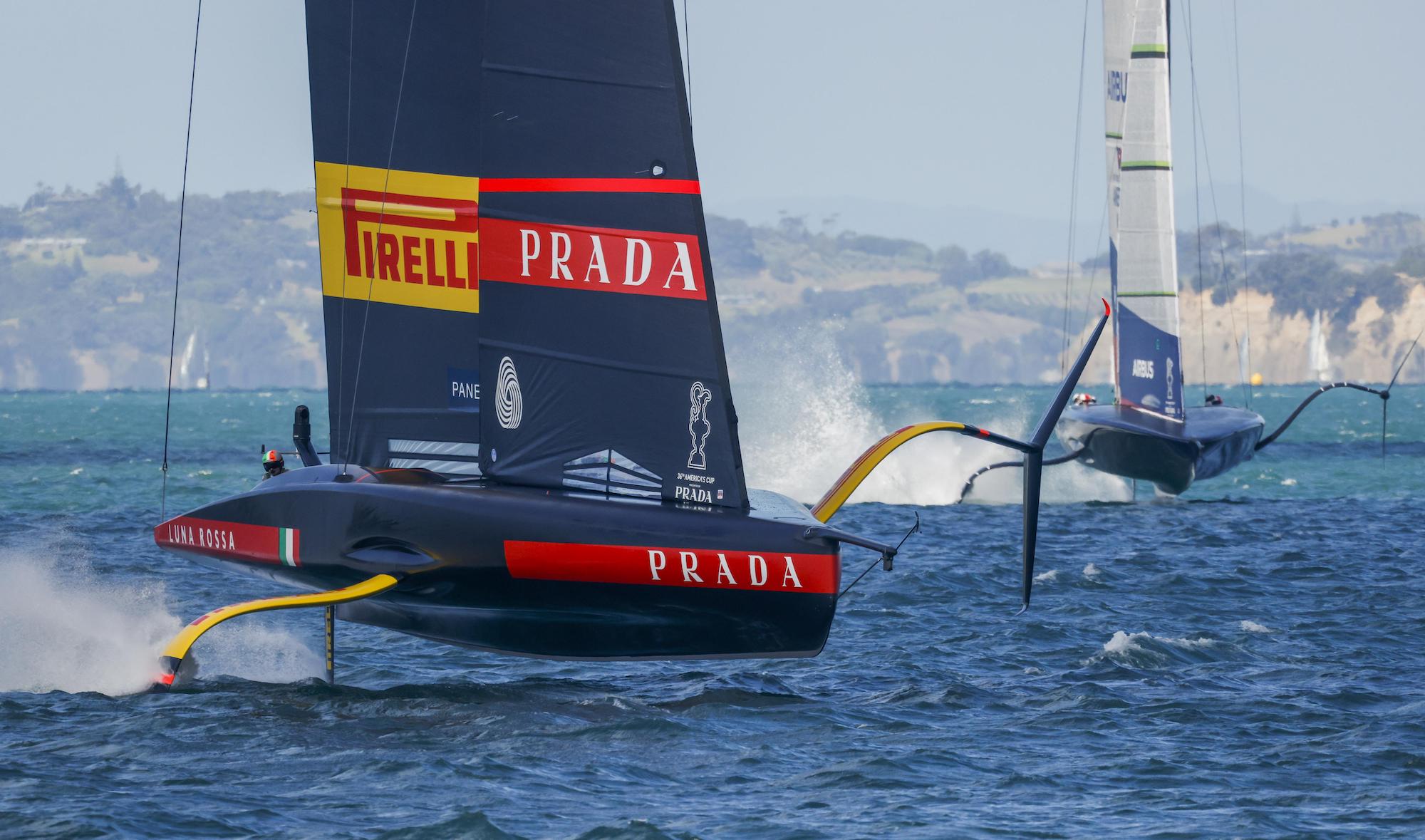 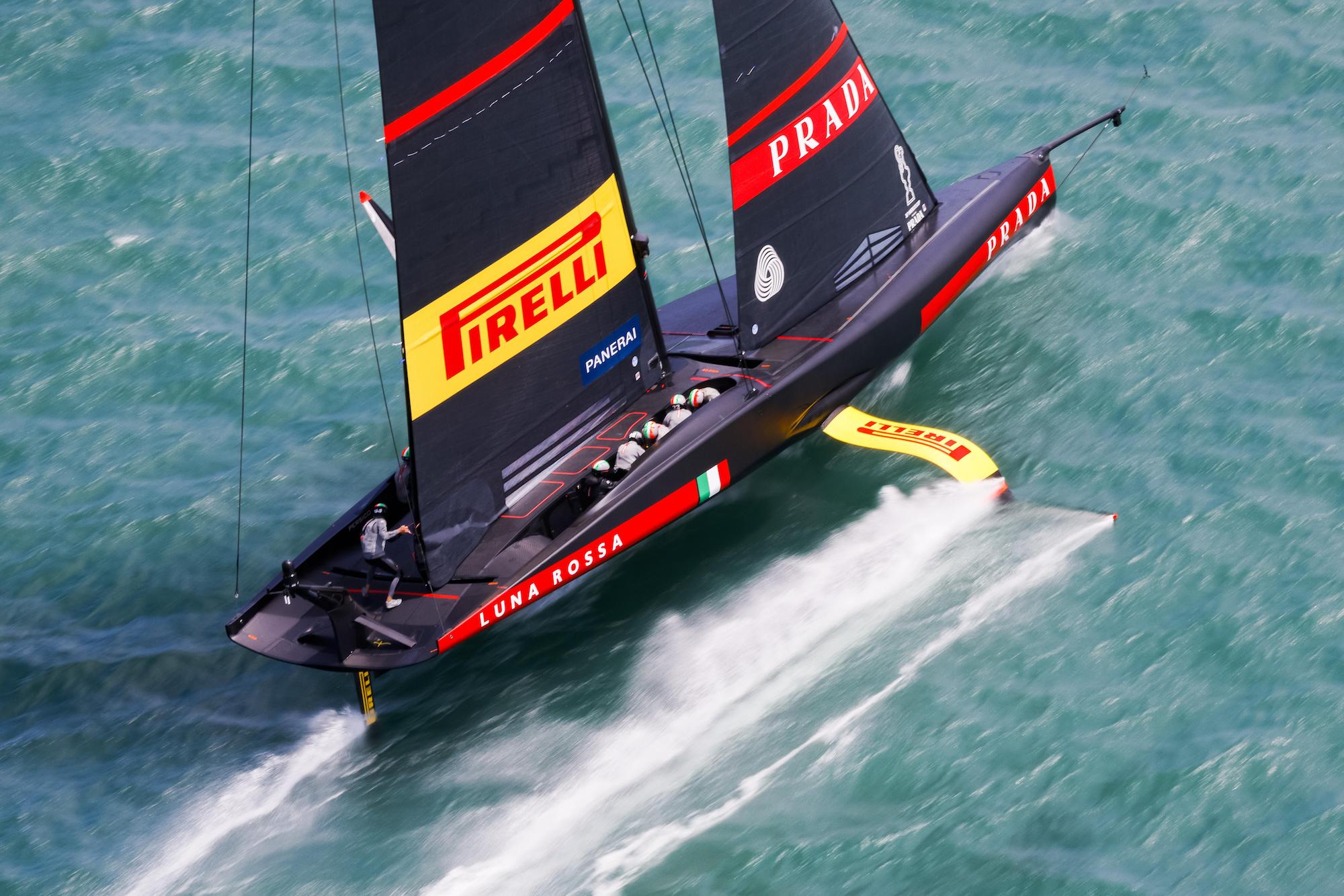 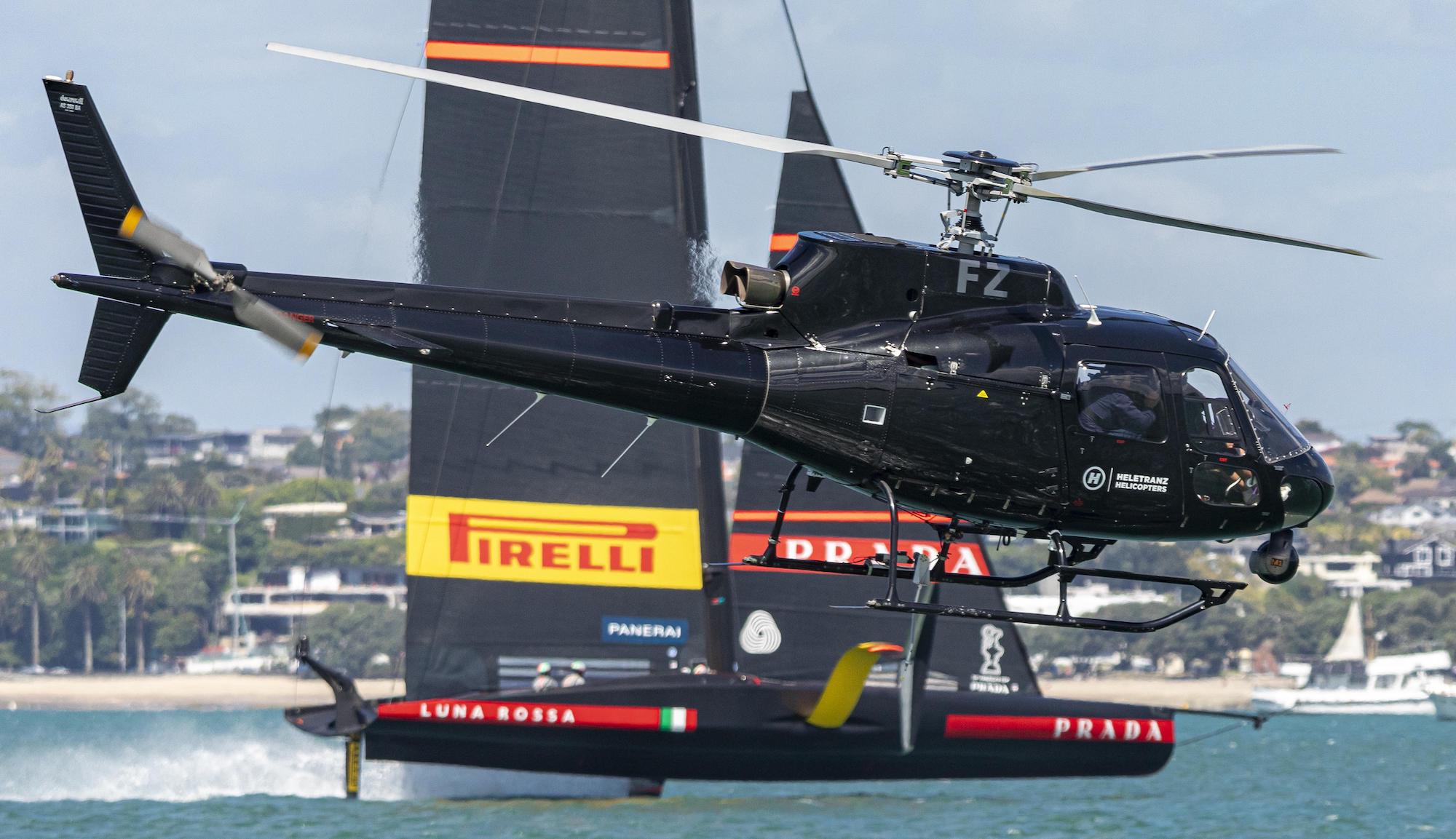 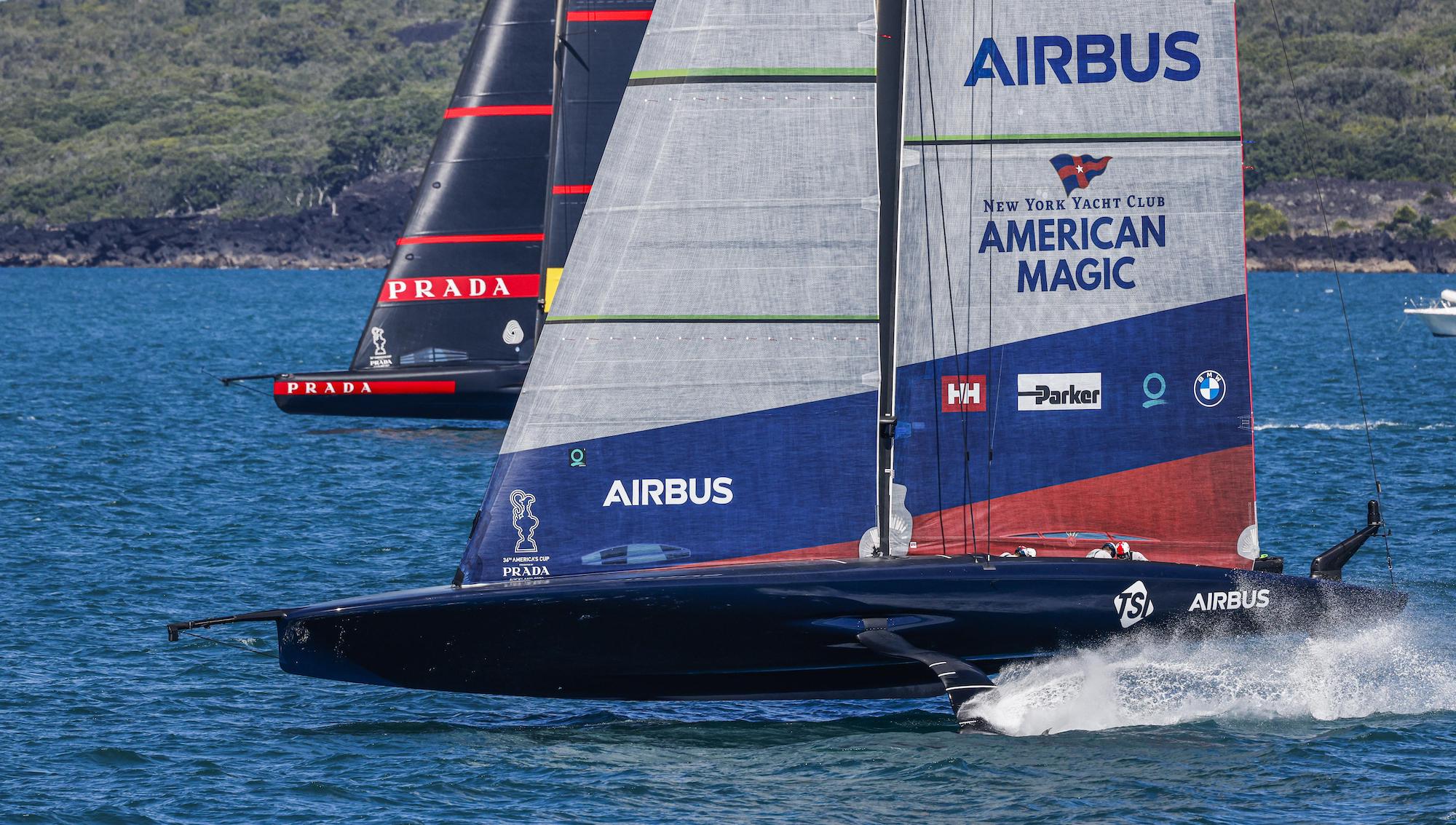 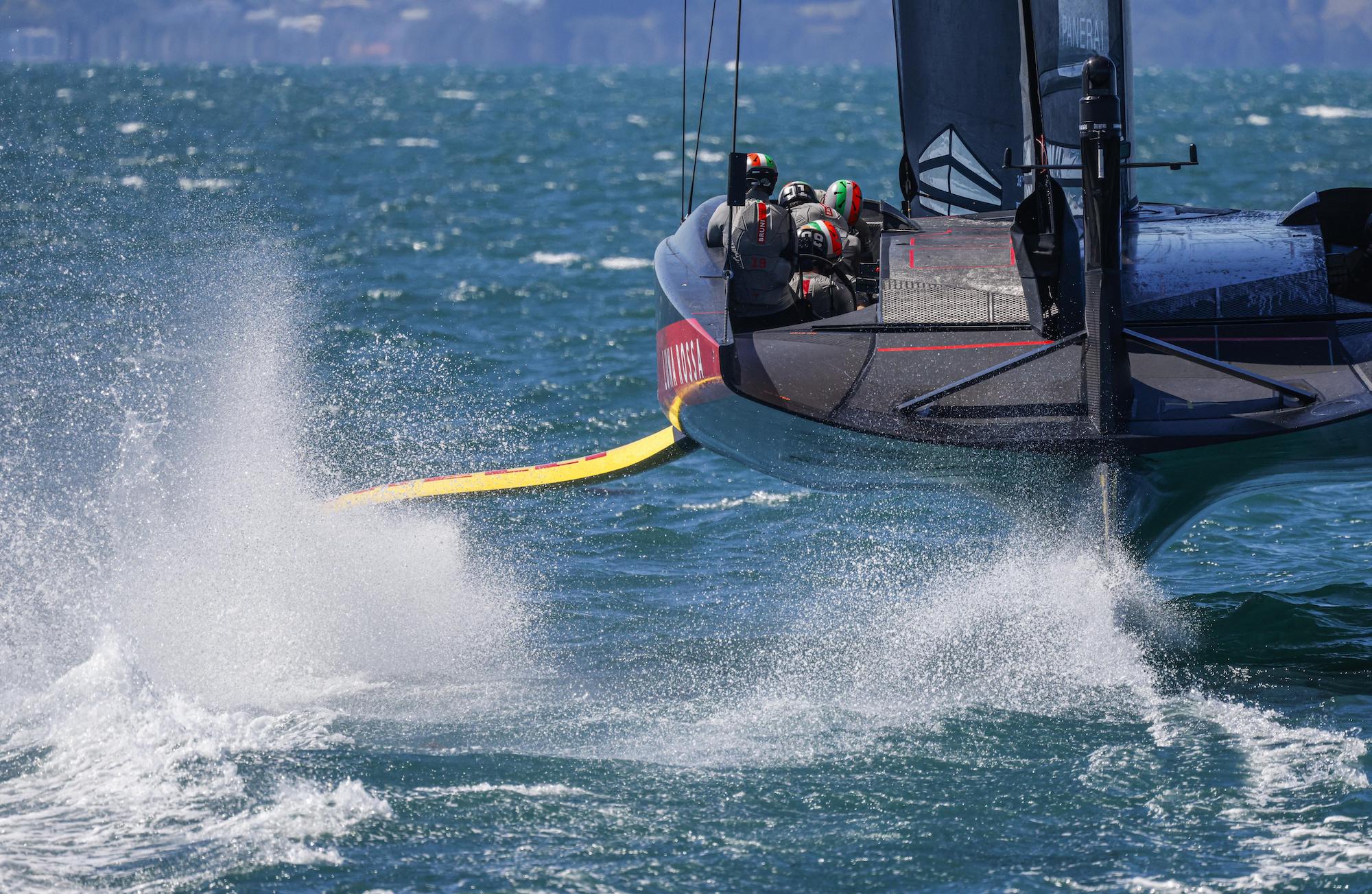 This was it. Do or die for the American campaign and the chance for the Italians to move straight to the Prada Cup Final. The breeze was now up to 16 knots, throwing another set of conditions into the mix. Could this deliver the difference required to keep the Prada Cup Semi-Final alive for another day?

This time American Magic was entering the start zone from the left-hand side on port tack and did so with perfect timing and at pace. Next came a hint of a different strategy as American Magic headed out toward the right-hand side of the pre-start zone.

But while this might have been a subtly different opening move, Luna Rossa was still focussed on what had worked before and was aiming to gain control in the pre-start.

As both boats closed in on the starting line as the clock counted down, American Magic was to leeward, hoping to force Luna Rossa up, but they weren’t close enough and didn’t have the pace to accelerate into a controlling position. Luna Rossa took the start while American Magic was forced to tack off onto port.

American hopes now were that the right-hand side of the course would be favoured, but at the first cross, it was anything but as Luna Rossa passed 130 metres ahead.

This was not looking good for American Magic, they were on the defensive as Luna Rossa controlled the game perfectly once again. Poised, polished and perfect, it was difficult to see how American Magic could take this race unless the Italians made a mistake. At this stage, there was precious little evidence to support anything other than another Italian win.

In fact, things were about to get worse for American Magic as their starboard cant arm refused to go down ahead of a tack onto port. Eventually it did, but not before they had overstood the layline into Gate 1.

By the time the Americans rounded they were 45 seconds behind, but their troubles weren’t over yet as technical issues continued. Then came a boundary infringement and a penalty, not that it made much difference, the distance to Luna Rossa was now 1,500 metres.

By the time the Americans rounded Gate 3, Luna Rossa was 2 minutes 42 seconds ahead. By Gate 4, the time difference was 2 minutes 36 seconds, the distance over 2,000 metres.

Only a disaster on the part of the Italians would reverse what looked like the inevitable. As it happened, the breeze had built further and keeping cool, calm and collected was becoming increasingly important to avoid tripping up. A few minutes later, Luna Rossa crossed the finish line to win their fourth race in a row, a win that now launches them to the Prada Cup final against INEOS Team UK.

“Now for the INEOS boys,” was the call as they crossed the finish.

While they would doubtless celebrate this win, the Italian team’s focus had already shifted.