Van der Valk in the Netherlands has launched the 27-metre Anemeli, a stunning fast displacement motor yacht which reflects the clear vision of an owner with over 30 years of boating experience.

Having originally chosen Van der Valk based on its excellent track record in meeting exacting briefs, the client was delighted as the stylish silver-coloured MY Anemeli was launched at the Dutch yard’s facilities in the Netherlands.

Started in January 2016, the all-aluminium MY Anemeli was delivered on schedule in June 2017.

With interior and exterior design by Guido de Groot and naval architecture by Jaron Ginton, she is one of the first Van der Valk yachts to feature a fast displacement hull design. She also integrates some very specific requirements by the highly experienced owner.

As the latest yacht completed by Van der Valk Shipyard, the aesthetically and technologically accomplished Anemeli amply demonstrates that, despite celebrating a half century since its founding this year, the yard has no intention of resting on its laurels. Its well-filled order portfolio will lead to several launches in the foreseeable future, not least the first in the revolutionary new BeachClub line, which is slated for delivery later this year. 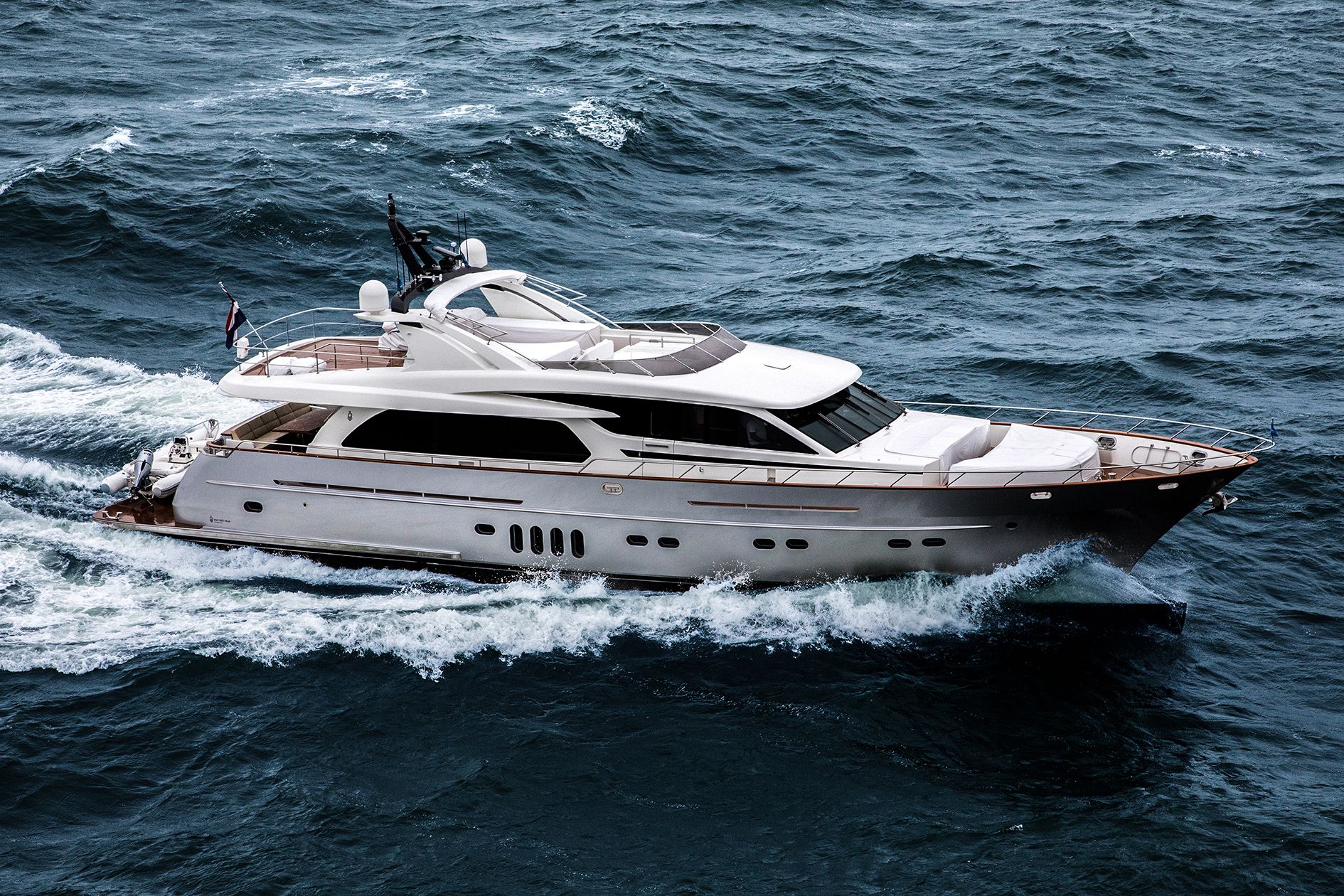 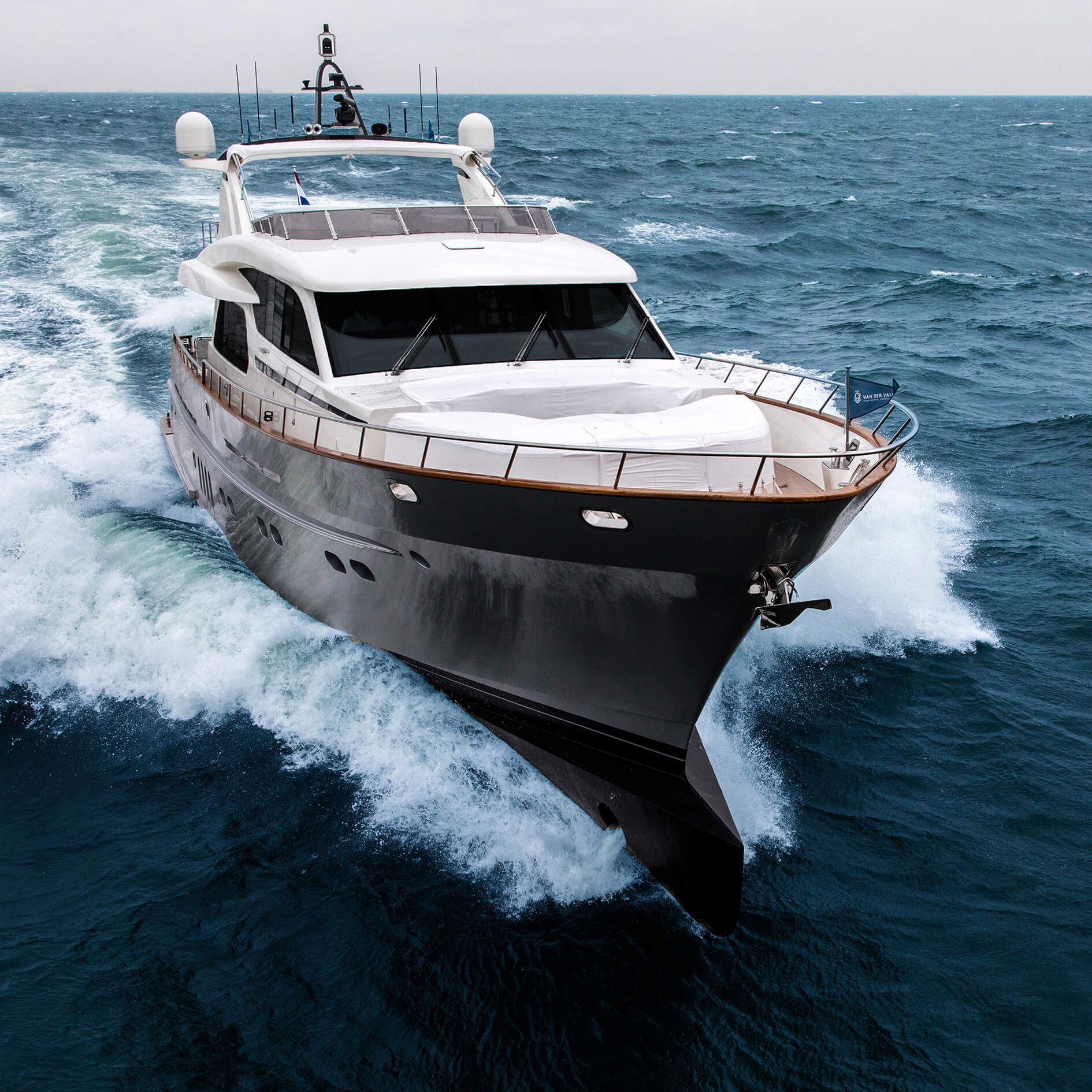 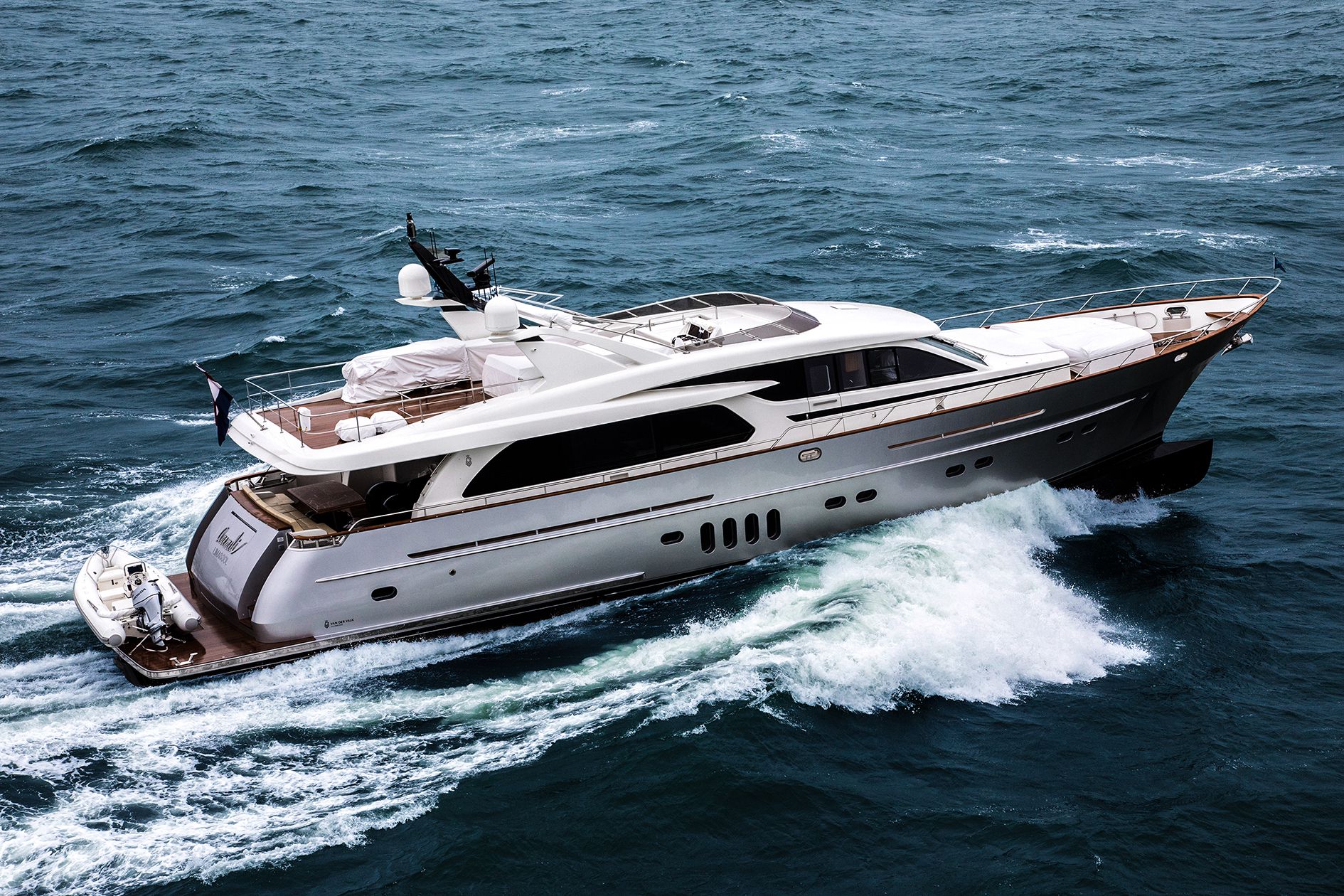 In an unusual twist, a bulb on the submerged section artificially extends the waterline around Anemeli’s submerged body, creating the effect of a longer hull and increasing her speed and efficiency.

Another divergence from previous Van der Valk vessels in this size range, and a distinct part of the owner’s brief, is the location of the tender storage on a multifunctional Opacmare Transformer platform aft.

This also features a pantograph system and a gangway/passerelle/swimming platform that is also suitable for baggage transport. This allowed the flybridge to instead be given over to leisure activities.

The flybridge features an outdoor steering position, a large U-shaped dining area, a shaded wet bar with several chairs and pantry, and a sunbathing area. Meanwhile, the main deck forward is occupied by a large informal sitting space and sun pads. 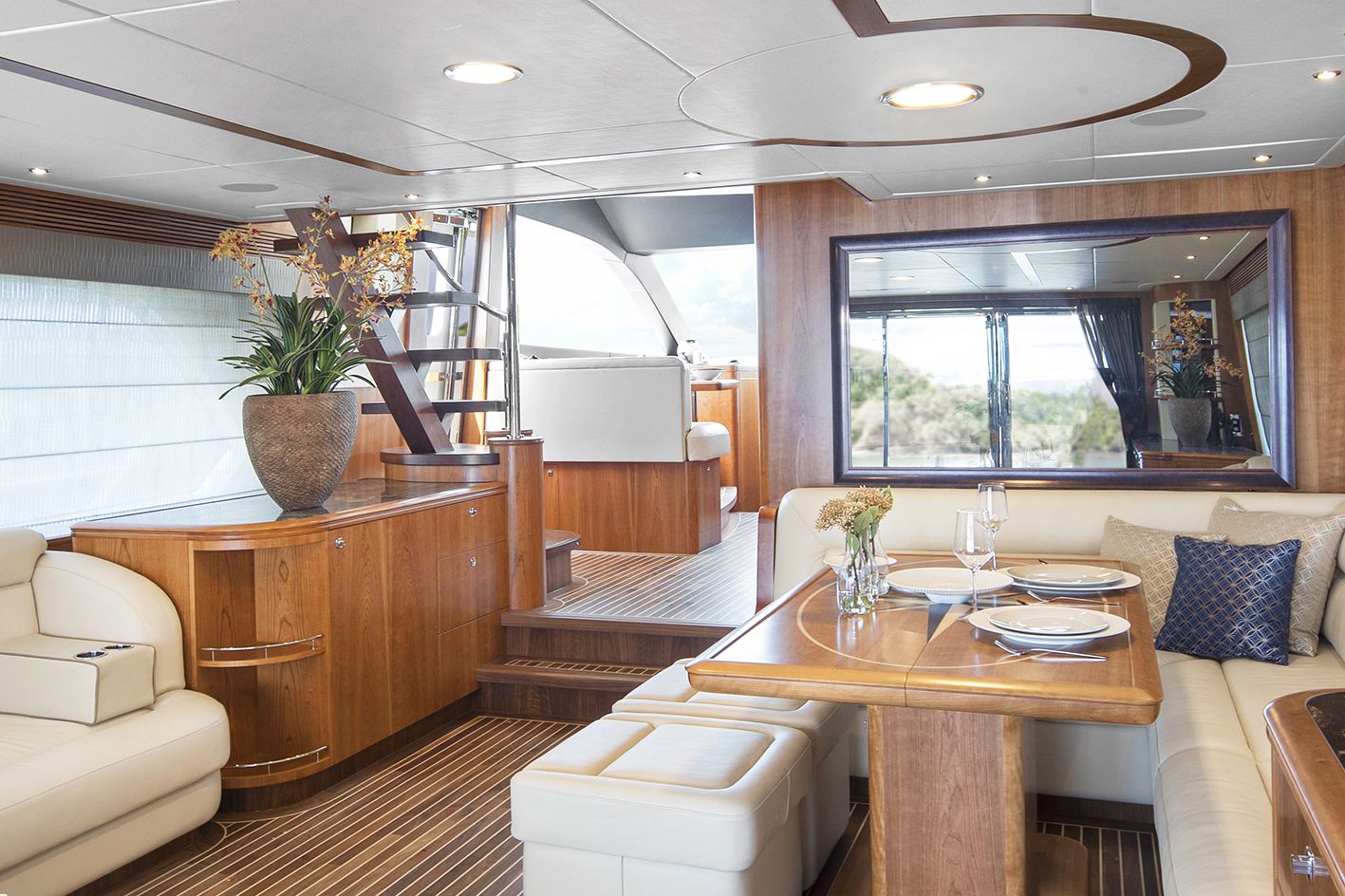 The saloon is spacious and serene. 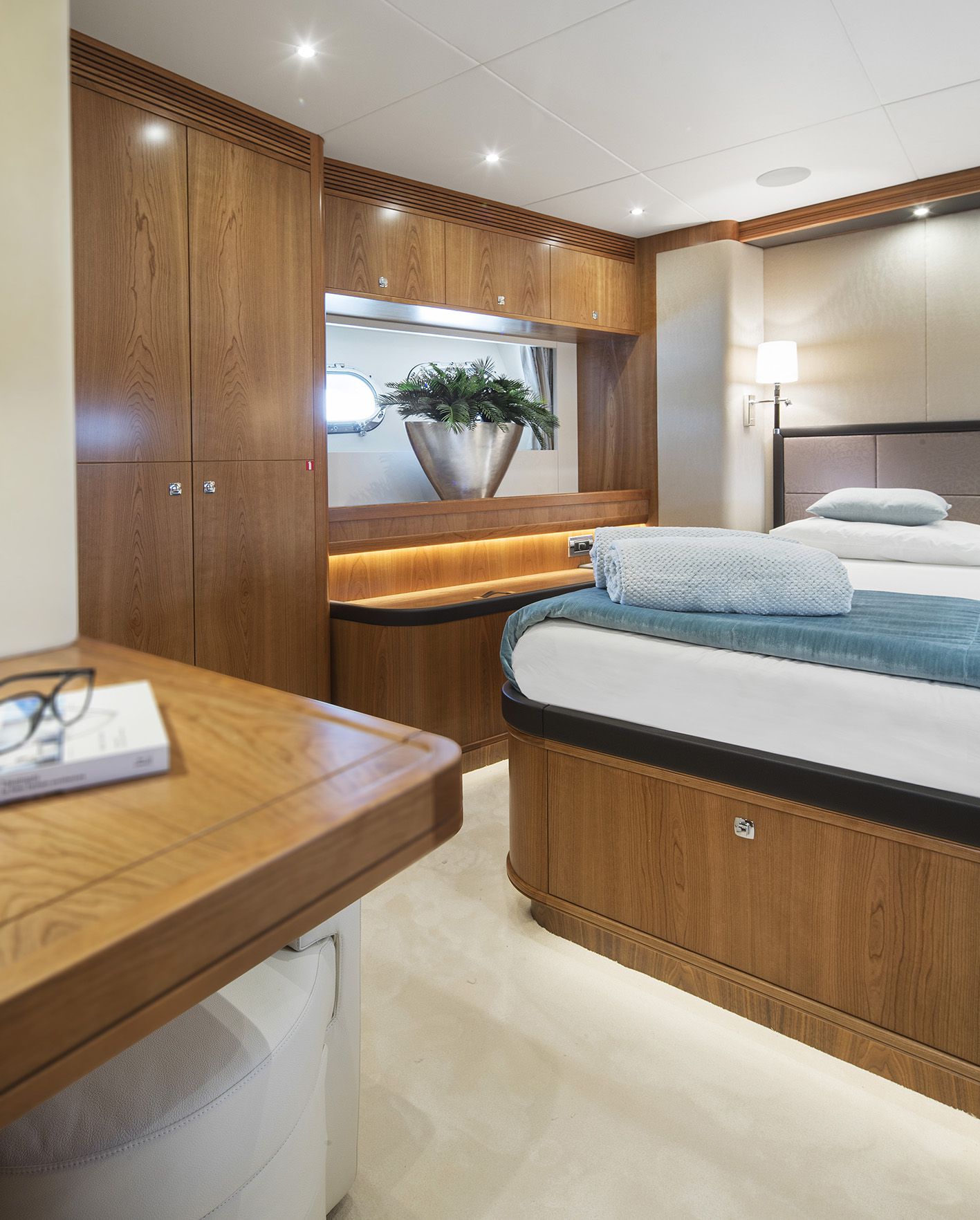 Accommodation is practical and beautifully styled. 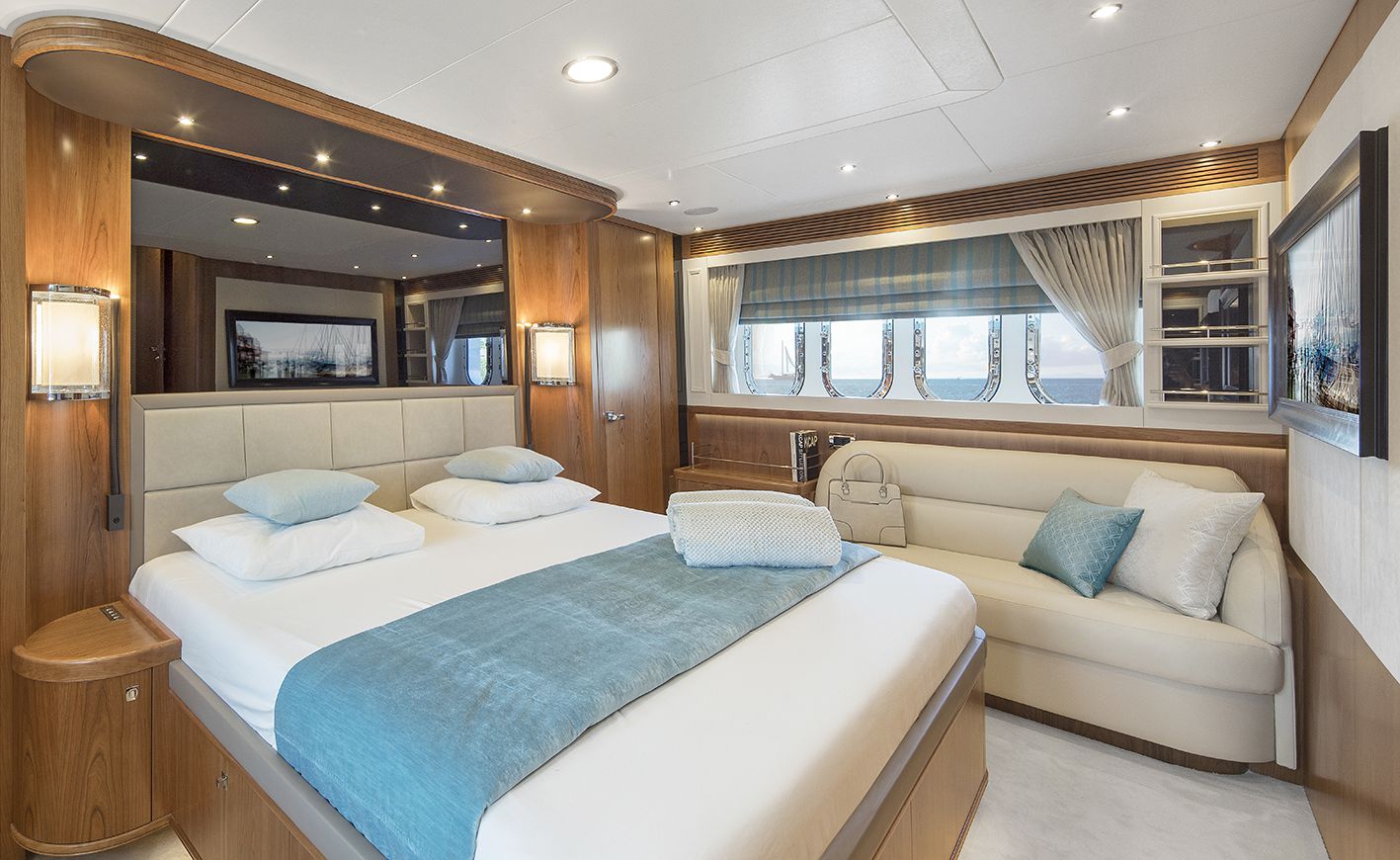 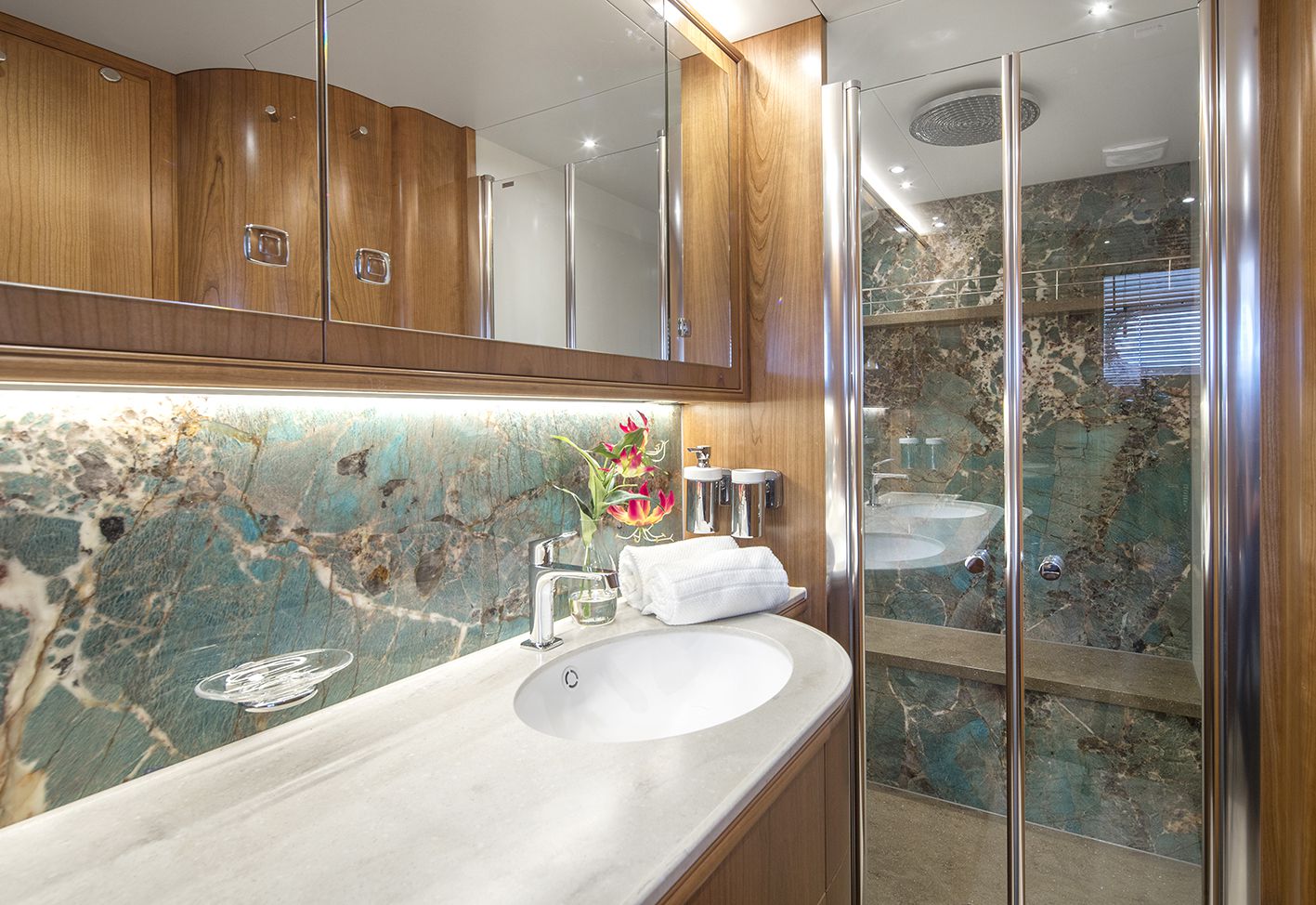 Typified by a classical nautical ambience, the robust and practical interior is executed predominantly in cherrywood. The main deck has a wide exterior area aft that centres on a lovely dining table. The saloon includes a nook with a dinette focused on an extendable table.

Halfway inside, the floating spiral staircase leading up to the flybridge has a delicate see-through structure that prevents it from blocking lines of sight. Doors on either side open onto the gangways.

The galley to starboard is very well-equipped with all conceivable appliances and gadgets. An indoor steering position to forward is flanked on the starboard side by a cosy hangout space for guests who enjoy watching the action at the helm.

Below deck, Anemeli boasts four cabins with ensuite facilities. The master suite amidships covers the full 6.72-metre beam and is flanked by two twin guest cabins and a large double VIP suite forward. There is a compact crew area in the bow reached directly via a custom hatch on the main deck forward.

The lazarette aft of the engine links to a large freezer to port (at the explicit request of the owner, a keen fisherman) and a utility room with washing machine, drier and extra storage to starboard. The lazarette is also home to diving gear, two SeaBobs and an oversized bathing platform.

Anemeli is the first aluminium yacht in the world to be fitted with MAN 1900 V12 engines. These are the heaviest, most powerful engines supplied by MAN Rollo for a yacht to date, and have only been available on the market since September 2015. Half-loaded, the yacht can deploy a maximum speed of more than 30 knots, more than had initially been calculated before completion.

Anemeli is also the first boat in Europe to sport the state-of-the-art VG120 gyro stabilizer by VEEM, which uses multiple smart control algorithms to ensure optimal stability and operation in a wide range of conditions. The yacht has excellent sailing qualities, and is very stable and quiet while underway. Her generators are twin 32 kW Northern Lights.

Naturally, Anemeli has Lloyd’s approval for the construction and welding plan, as well as full MCA-MGN-280 Vessel operating Category 2 certification.