Maritimo has overhauled the premium Elandra model, and announced a raft of new models, a top secret new range and new markets.

Premium marque, Elandra, bought by Maritimo in June this year, has undergone a complete overhaul from the hull up, and will be relaunched as the X-Series in 2017.

Maritimo held its annual media briefing at its Gold Coast HQ last week, summarising the year in review and tantalising with snippets of information about new models, new markets and investment.

Company founder, Bill Barry-Cotter opened proceedings by acknowledging that the much-vaunted float was for now off the agenda, and the focus instead was on “remaining the best flybridge product manufacturer in the world” and managing the “fat order book” that was the result of a dedicated thrust into international markets.

Larger models, which deliver 10 percent more margin, customization to meet demand, innovation in product and efficiencies in processes had contributed to healthy growth across the business and the principles of “energy, effort, passion and support” would build on that in 2017.

Leading the news items was the announcement that the Elandra line would be rebranded and reworked under the guidance of head designer, Tom Barry-Cotter (pictured above), relaunching in 2017 as the X-Series luxury motor yachts.

Tom has been back in the Maritimo fold, contributing to all areas of design, for four months and instrumental in the development of Elandra to its next incarnation. 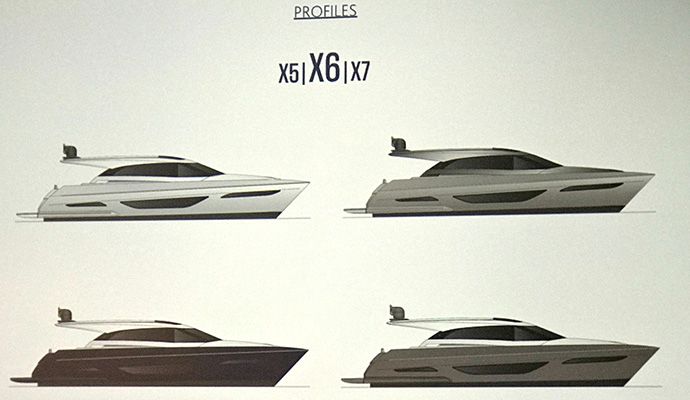 A preview of the new X-Series, a reworking of the Elandra.

The range will comprise the X5, X6 and X7 Sport Yachts, and the X6 will be the first model in production, fusing the Maritimo qualities of long-range cruising capabilities and fuel economy, engineering and construction with its hallmark features of the distinctive raked bow and maximised entertaining and socializing: larger cockpit and foredeck, 7.5-metre saloon, exceptionally roomy galley and accommodation.

New to the X-Series will be an evolution of the hull, deck and hardtop, plus a unique attribute which will be a category-breaking feature – a new aft cabin which converts the lazarette section into a utility cabin, cabana, fourth Queen-size berth of 3.2m garage, depending on the customer’s requirements.

The X6 will boast a 1.4-metre longer hull than the 53 and shaft drive propulsion, crucial to getting the aft space with 1950mm clearance for ample ceiling height.

“The aft cabin will be completely new in a boat this size,” stated Phil Candler, General Manager – Operations. “This is something like the Beach Club you would expect in boats of 100-feet-plus. It will be fully fiberglass lined, with the finish of the Master suite, completely water-tight with a rubber inlay and guttering system.”

The new X-Series is the product of what Candler referred to as “the most R&D in the company’s history”.

“We have thoroughly workshopped this range, using an external company as well, and we are confident it will fit a niche in the market. Our European, US, Australia and NZ dealers believe that once it launches, the X-Series will be on fire in those markets.”

Elandra clients are assured of the same warranties and service of all Maritimo customers. “There will be no ‘letting down’ of any owners,” Candler emphasized, referring to the three Elandra models sold. The fourth, a 53 is still in build and was used for research purposes.

The X-Series will be “aggressively marketed in 2017” with no dates set at this stage for the launch of the X-5 and X-7.

Following that major revelation was the briefest glimpse of the “top secret range” that signals a “new model, new direction, new ground” for Maritimo. Positioned as “the Bentley of boats” by company founder, Bill Barry-Cotter, the 53-foot long-range cruiser will have its own branding and niche.

At this stage, only 3D models exist and the company is working on finalizing the interiors, while market research is underway, but from initial renders, it looks like a stately “down-east” style cruiser. Final designs and details will be revealed at the 2017 Sanctuary Cove International Boat Show in May.

In the US, the Galati team is very excited,” stated Greg Haines, Maritimo's International Sales and Marketing Manager, referring to its US dealer. “An Australian-made boat like this will be in high demand.” 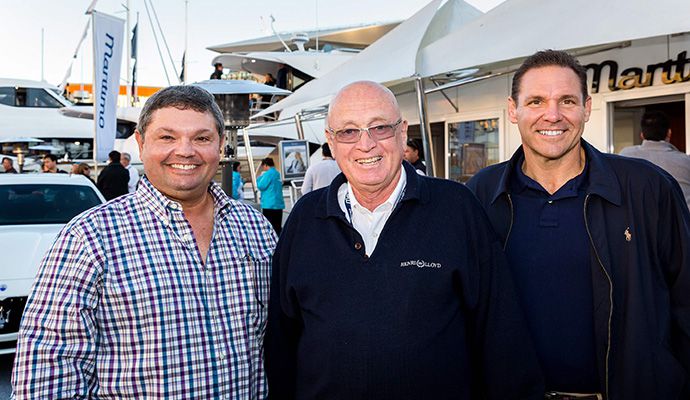 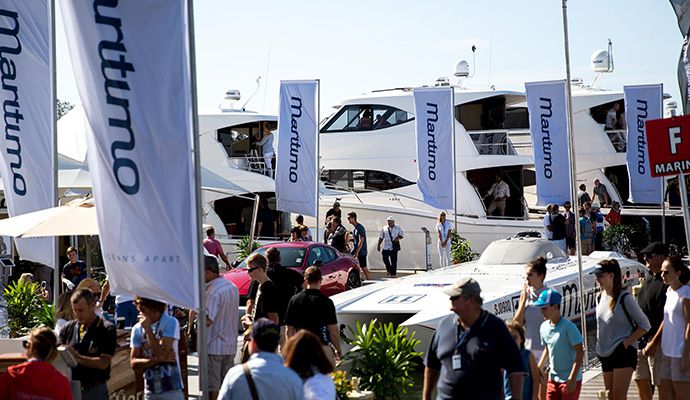 Maritimo will soon have its sales office at Sanctuary Cove.

Locally, Maritimo’s Australasian Sales Manager, Ormonde Britton will be relocating from Runaway Bay to Sanctuary Cove, with its office on the marina and several boats on water.

The new premises will comprise a full fitout to replicate a fully-functioning galley of an M70, complete with Miele appliances, with the intention of hosting cooking classes for customers once a month.

It makes sense to be within the Marine Village,” explained Britton. “Our boats are getting bigger so we require more berth space on water, and it’s a more relaxed environment, adding to the customer experience. It’s an exciting time at Sanctuary Cove with the addition of more prestige brands. The S70 will be our showpiece and it will enjoy the foot traffic around the marina.”

Britton was extremely positive about Australian sales and stated product demand for the M Series and the S Series continues to expand.

He said that the Australian market still represented more than 50 percent of the company's overall business and Maritimo was proud of the fact that many of its Australian and New Zealand customers were multiple boat owners, sometimes on their third or fourth Maritimo. “Our Australian owners are very loyal to the brand and our research shows that they love their Maritimo's and the lifestyle that ownership provides,” he said.

Adding to its slew of announcements, Maritimo provided an update of sales, new models anticipated in 2017 and its push into new markets, including Sri Lanka, Mexico and new regions in South America.

Greg Haines said the number of large motoryachts the company had sold in 2016 has increased on the previous year.

“The M70 cruising motoryacht has been one of our best models, but the new M64, released just before Sanctuary Cove this year, has also attracted a lot of interest and eight  M64’s  have now been sold,” he said. “The base price for the M64 is $2.592 million,” he said.

“Overall Maritimo has had a very strong year and sales are up. Staff numbers have also risen considerably in the past year in line with increased demand for our product and there is a continual focus to train and develop our people to continue the high standard of workmanship.

“The larger boats in our model range are gaining a worldwide reputation for their overall volume, the luxuriousness of the finishes, their sea worthiness and their fuel efficiency.

“We recently had an M64 travel from the Gold Coast to New Zealand under its own steam, on a journey involving 138 hours at sea and the boat never missed a beat. It is this sort of performance that is seeing the brand shine internationally.”

He said Maritimo’s expanding international dealer partner network continues to grow and this was underpinning the overall success being enjoyed by the company.

“Our European dealer partner, Spencer Ship Monaco, has grown considerably with multiple sales to date. We have also just appointed a new dealer partner in Sri Lanka and our existing dealer partners in the USA, Singapore, Canada and South America are all performing well,” said Haines.