An experienced racing and cruising sailor pushed his high-profile build and design teams to create ‘a beast’ of a performer.

“I remember when he initially came to the office, I sketched out a design and he said, ‘It’s OK, but a bit ordinary. What are you going to do now?’”

So said the late Ed Dubois of Dubois Naval Architects, about one of his first meetings with the owner of Ngoni. The owner was about as forthright as can be; convention had no place in his universe. His directive to Royal Huisman regarding the 58-metre was just as no-nonsense, and now legendary: “Build me a beast. Don’t build me a wolf in sheep’s clothing. This has to be an edgy and innovative weapon; fast and furious.”

While plenty of custom-yacht clients have clear vision, few have the laser focus of this particular gentleman. Even fewer have the on-water experience he does. This is someone who’s raced in the Fastnet and Sydney to Hobart. He’s also eminently well versed in the cruising-yacht world, having owned a Royal Huisman as a brokerage buy.

Commissioning a high-performance, global cruiser that looks nothing like what already exists on the water is a tall order. So, he sought out design and build teams who not only understood the challenge, but were willing to be pushed a bit further and harder. 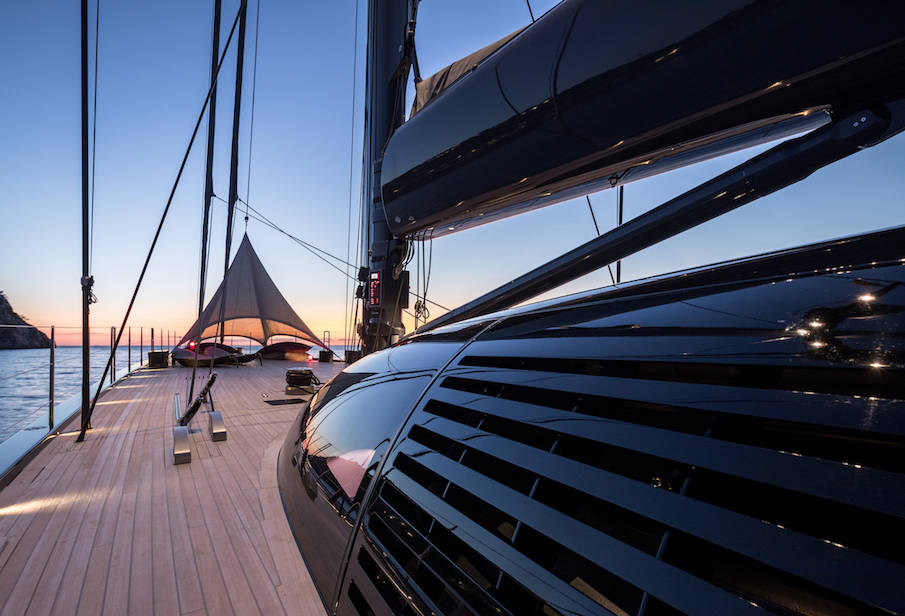 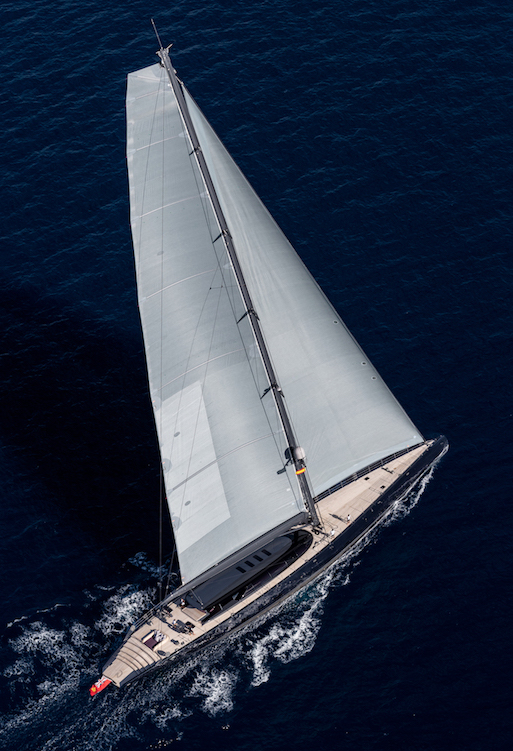 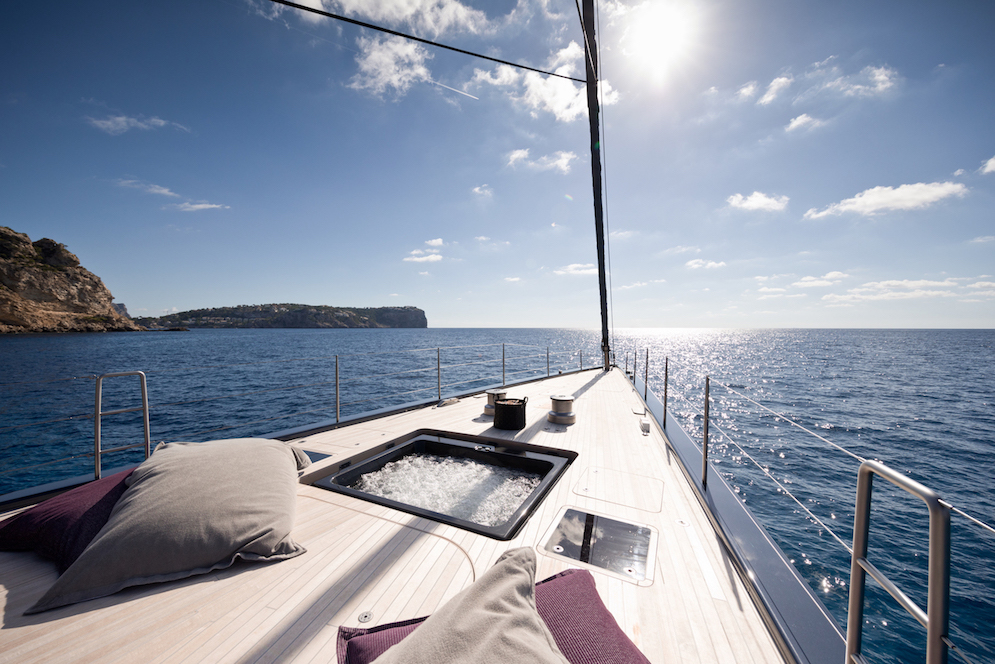 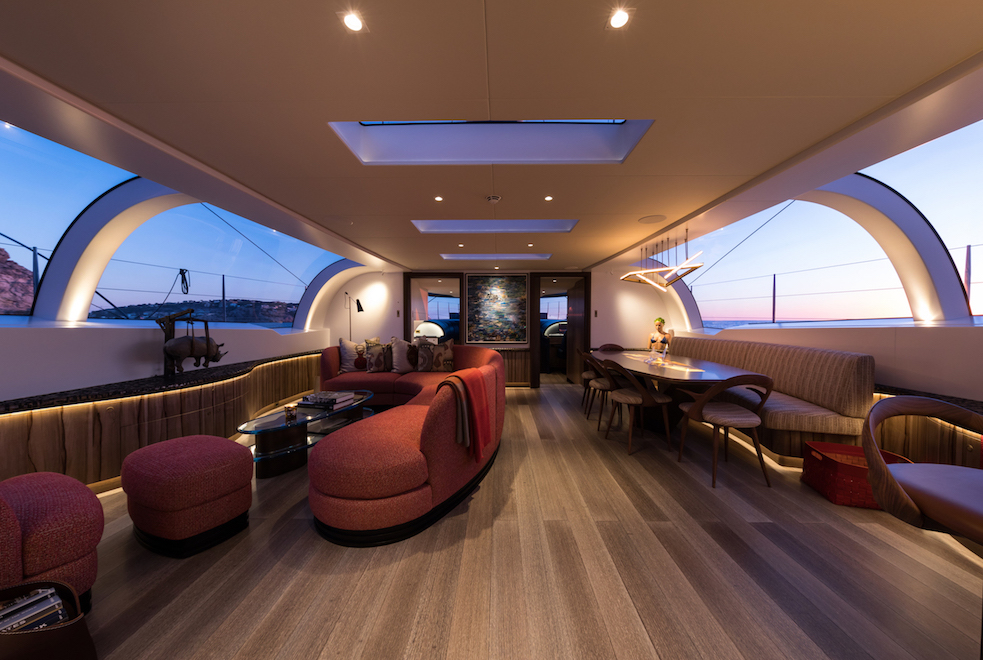 Dubois was a natural choice, having started his career in the 1970s with racing boats. While pleasure yachts became the focus in later decades, he never forgot that performance and comfort go hand in hand. Ngoni’s owner wanted the designer to draw significantly on his early career roots, while still making Ngoni a luxurious, go-anywhere traveller.

“The owner wanted me to take a fresh look at large-yacht design,” Dubois explained. “I had to reset my internal computer, if you like, and look hard at how we could save weight and add strength.”

This led to Ngoni’s reverse sheer. Dubois likened the design element to that of a roadway bridge – specifically, “where the road is convex to resist the compression created by the weight of the traffic.” In analysing the structural effect that a reverse sheer would have on Ngoni, Dubois Naval Architects determined she’d be 12 percent stiffer for the same weight.

Even with that knowledge, the designer was dubious that the owner would like the aesthetics. The final look incorporated a reverse sheer transitioning into a concave sheer aft, which provides a palpable benefit, enhanced visibility in the cockpit. Interesting enough, the meeting at which Dubois showed the owner the new look followed the above-mentioned unsuccessful sketch meeting. “He loved it,” Dubois recalled. “In fact, he gave me a big bear hug!”

As for Royal Huisman, the shipyard is renowned for its sailing superyachts. Less known, perhaps, is that the shipyard made inroads into the international racing circuit in the 1970s. The 1977-1978 and 1981-1982 Whitbread Round the World Race winners, in fact, were Royal Huisman deliveries. Therefore, on multiple levels, the shipyard and the owner spoke the same language.

Even with that, though, he challenged the yard. A fan of taking the wheel himself, he eschewed complexity. He favoured light yet firm steering, which further needed to be responsive and adjustable, of course. “I want to get off the wheel after a day of sailing feeling knackered from the excitement of hands-on, fast sailing,” he told the management team. In other words, no hydraulic or electric power-assisted steering allowed. This, for a yacht that her captain, Iain Cook, says is capable of 20-plus knots of boat speed.

Royal Huisman determined that the solution partially lay in a high aspect-ratio rudder and manual system. Ngoni’s single spade rudder is one of the largest carbon fibre rudders created, 6.95 square metres. Manufacturing this was challenging on its own, but more so because of the significant sail area. The total upwind area is 1,950 square metres, while downwind it’s 3,093 square metres. On a related note, Ngoni has an 853-square-metre square-top mainsail, with a load-reducing halyard lock. The sail can also automatically detach and furl, with its supporting diagonal batten, into the boom with little help from the crew. According to Ngoni’s project manager, Godfrey ‘Goddy’ Cray, this was a first in superyachting.

As challenging as individual features like this are, the overarching challenge for Royal Huisman was the yacht herself. Performance yachts are slender yachts. Add in things like a 71-metre sloop rig and its loads, significant-size ports, a fold-down balcony in the sea-level gym, a tender garage, and a hot tub, and the complexity increases. And did we mention the 100-ton lifting keel and its loads? 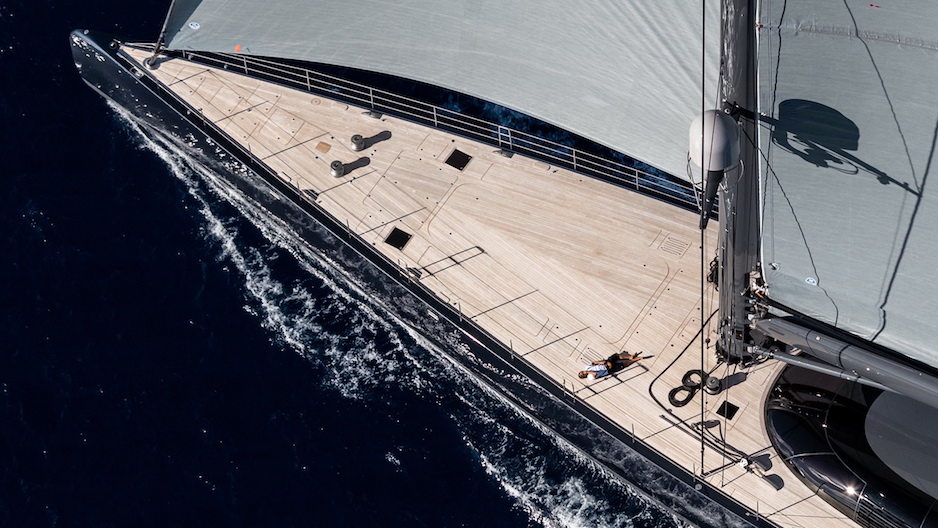 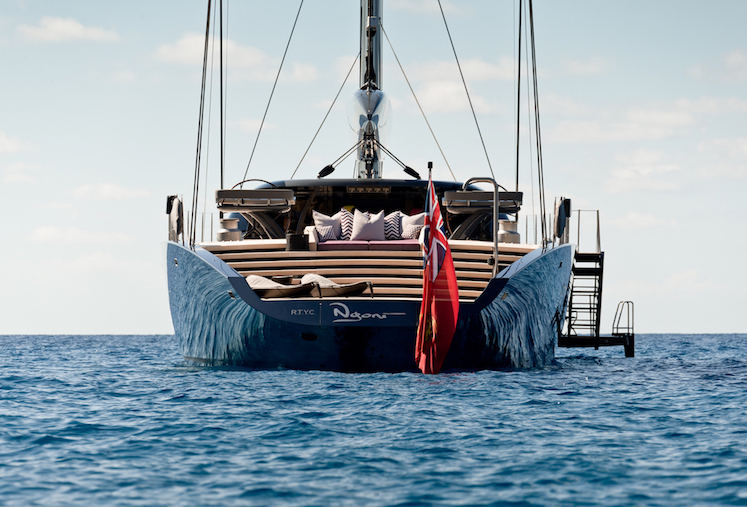 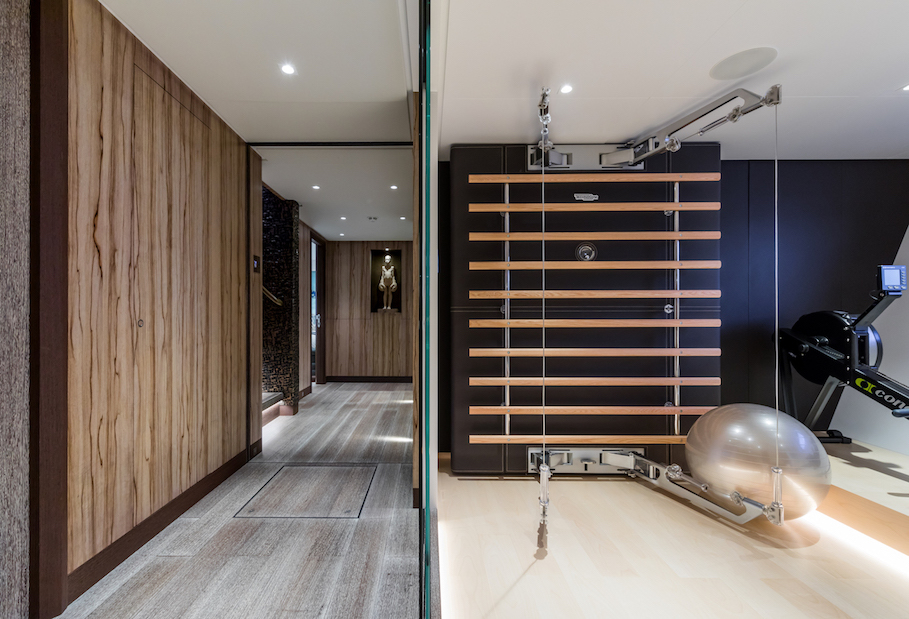 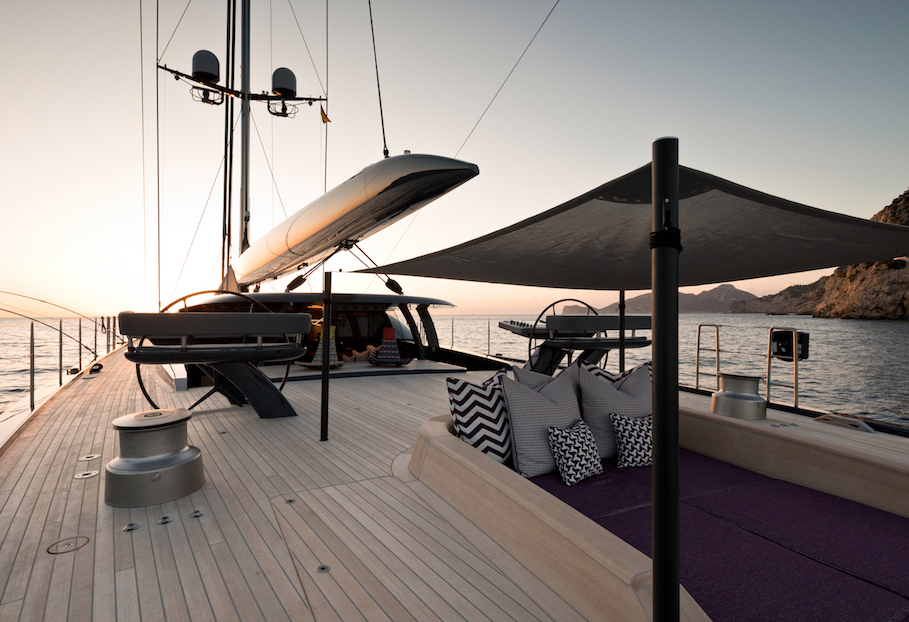 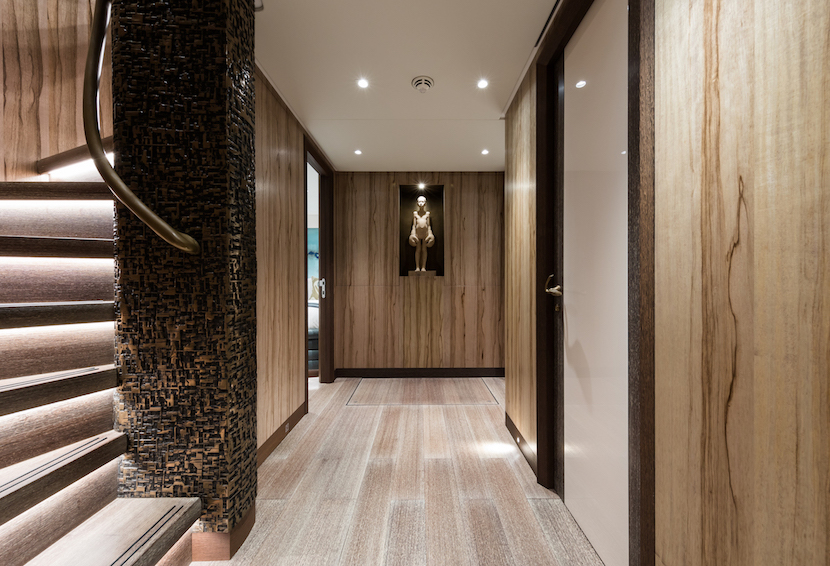 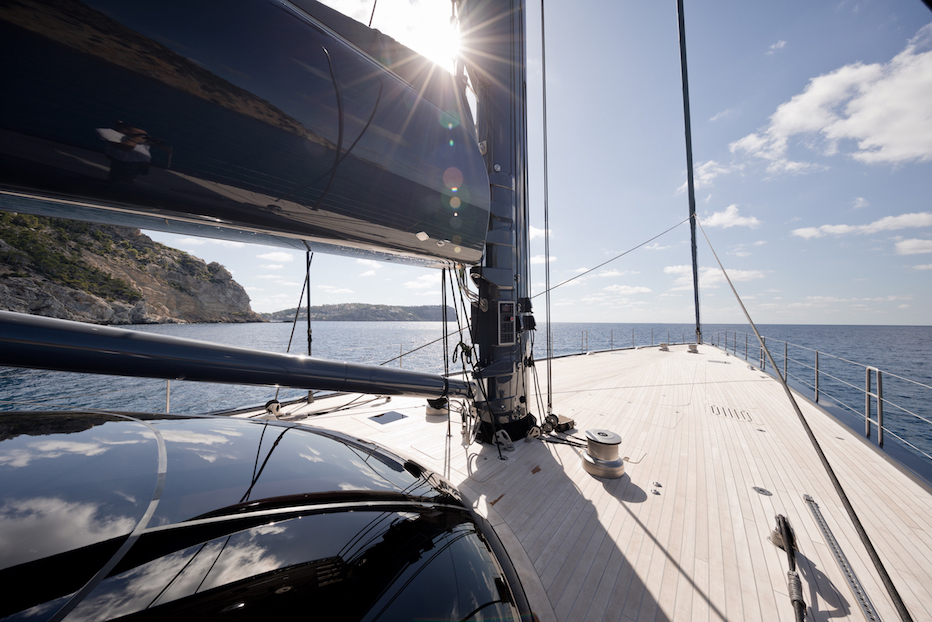 The owner held the proverbial bar high for the interior as well, and not just in terms of aesthetics. Because of his emphasis on performance, he understood the need to sacrifice some interior volume. Cook says Ngoni essentially includes the creature comforts of a yacht around 500 gross tons in a 396-gross-ton package.

As for the aesthetics, the owner tasked Rick Baker Ltd with avoiding traditional yacht-design approaches. This meant the exterior styling and colours didn’t dictate how to proceed throughout the interior. In addition, the owner encouraged the studio to embrace curves and unusual materials. Each area should have its own identity as well, but still look part of a whole. Finally, the owner wanted a masculine feel, with pops of vivid colours.

Having designed a number of the owner’s residences, Rick Baker of the eponymous firm and his partner, Paul Morgan, had a good understanding of what the owner would like. Still, though, Baker admits the job pushed them, since he and Morgan had never taken on the full interior of a sailing yacht before, previously designing just individual furnishings.

The duo consulted with Royal Huisman as to what would and would not be feasible and practical. They certainly did their homework well. After approving design drawings, the owner of Ngoni first saw the results in person on launch day and was thrilled.

Among the eye-catching elements about Ngoni are custom-made resin panels. Turquoise tones characterise the panels in the two-level master suite, flanking the bed and covering doors on its lower level. Meanwhile, in one of the two (yes, just two) guest staterooms, green resin panels sit to each side of the bed, picking up the room’s colour scheme. The resins, along with sculpted metal surfaces, unite the areas where the owner spends time with family.

As much as the individual parties responsible for Ngoni are pleased with their accomplishments, at the end of the day, the owner is the one who needs to be satisfied. Suffice it to say he is. Not only did the superyacht cover 6,000 miles in the Mediterranean from her first summer afloat into the early part of autumn, but also the owner was on board for most of those miles.

Some superyacht owners might take issue with how he sacrificed interior volume for the sake of performance, rather than finding what they’d consider a happier balance. But, as Cook says, “At the end of the day, what is the point of a sailing yacht if she is no fun to sail?” And, what is the point of an anything-but-ordinary sailing yacht if she doesn’t dare to be different?