Motor yacht marques have become more ambitious in their quest for volume and their crafty use of space, and Sunseeker’s latest Manhattan 66 is a prime example.

The proud owner of our Manhattan 66 test boat appreciates the evolution of the species concept better than most. His previous boat was the previous model. His old Manhattan 66 measured 45.6GT. His new one delivers 47.5GT. It may not sound much – just 4.2 percent more – but believe me, you really notice that extra volume where it counts.

“Nothing is allowed to impinge on headroom and wherever possible, protuberances have been kept outboard rather than inboard. They are always at a minimum, and all equipment onboard is always hidden as unobtrusively as possible.”

Both main saloon and flybridge on this new 66 deliver 2.5 metres squared more apiece than their predecessor, which is actually a heck of a lot. But that’s nothing to the accommodation gain on the lower deck. The difference there is a whopping 8 metres squared, principally because the engine room is smaller and further aft, but also because the new hull is more fulsome in every respect. 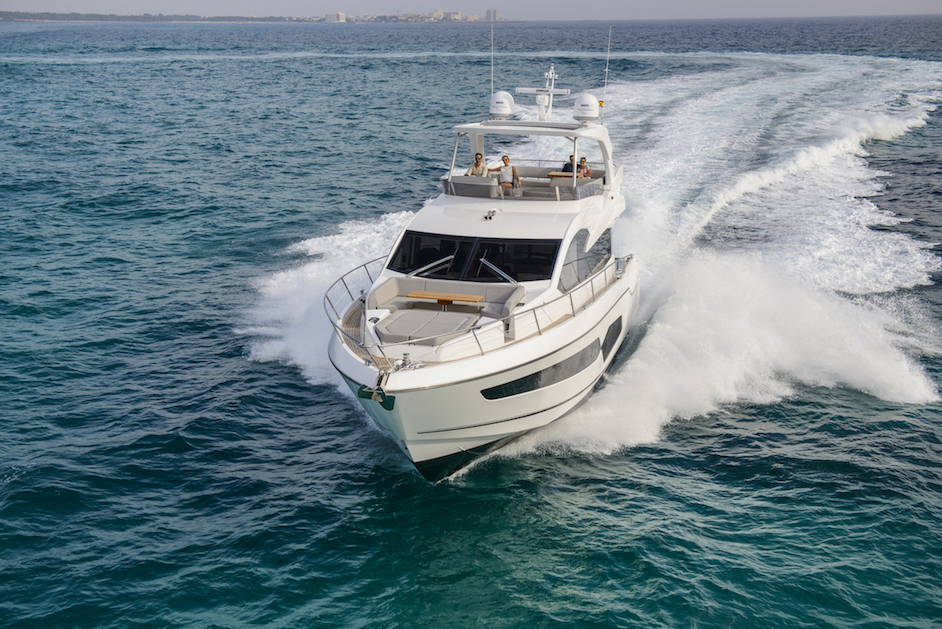 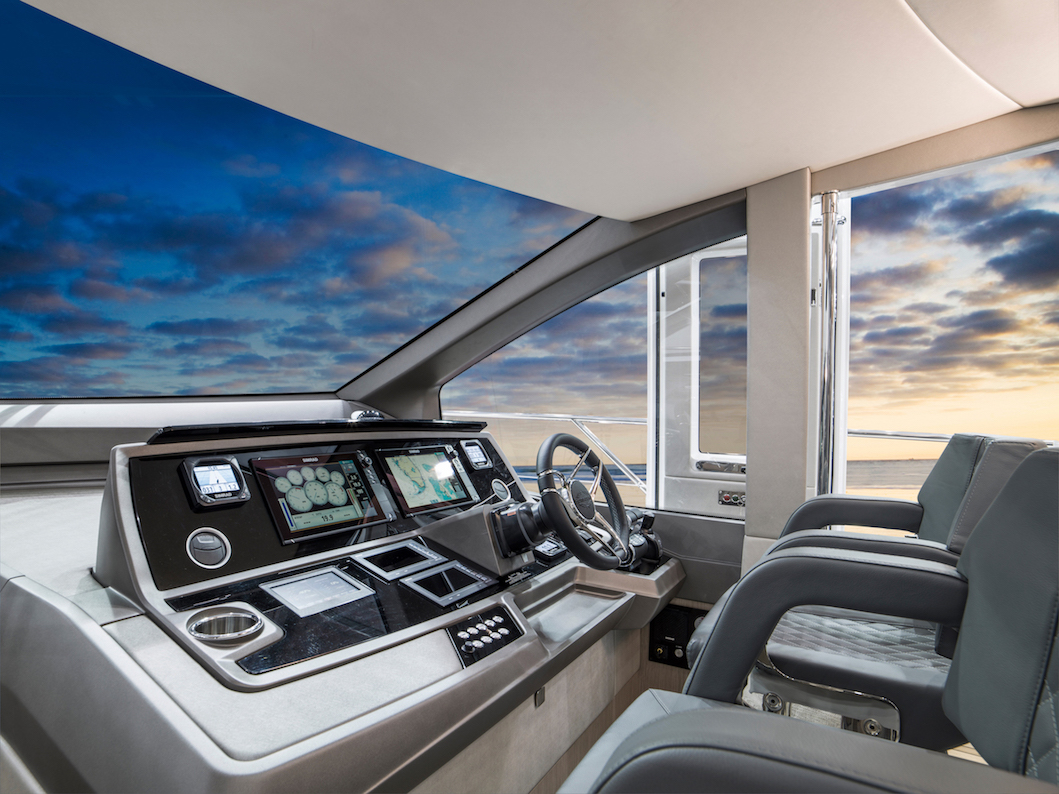 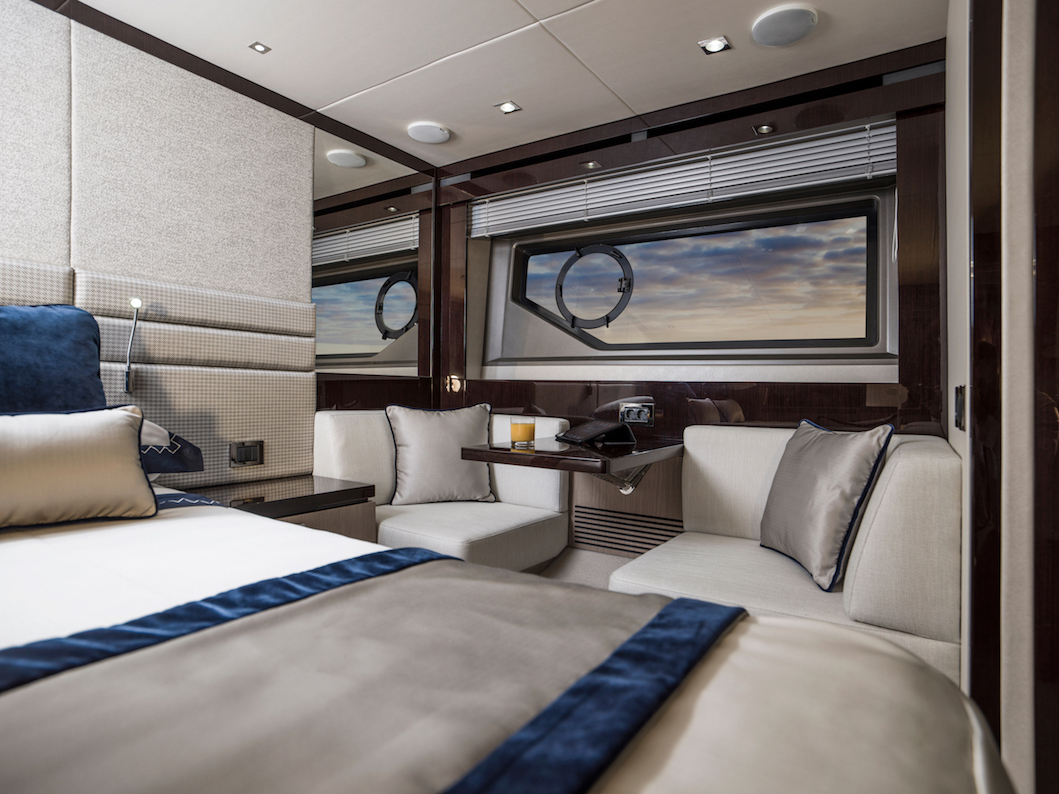 Indeed, the old 66 was longer overall and at the waterline, but the beam and displacement were a little less. And the new 66 squeezes in bigger engines and a bigger generator and can carry more fuel, although the water tanks are slightly smaller.

Propulsion choices for the new 66 are twin 1,000hp or 1,200hp MAN V8s or twin 900hp Volvo Penta IPS1200s. We’re told that around 60 per cent of the 27 or so Manhattan 66s delivered at the time of writing have gone for the biggest MANs and virtually all the remainder have had the smaller MANs. The first one to get an IPS installation is only in build now (late May 2018), and the model is a year into its life cycle. Pods add quite a bit to the extras bill too, which will explain why they haven’t been more popular.

We got to play with our Manhattan 66 test boat in spring. The boat’s based in Port Adriano, a super high-end marina close to Mallorca’s capital, Palma. This marina’s notable for having been dressed by one of the world’s most controversial creatives, Frenchman Philippe Starck.

Imagine a thoroughly modern marina with open-terrace bars and restaurants that has then had the interior design treatment outdoors. Its quays and harbour walls are lined with lounge furniture on steroids ─ enormous table-lamps, colossal pot plants, super-sized concrete picture frames complete with canvasses. Only the giant, fluffy cushions are missing. This place looks like it gets cleaned by a Shrek brandishing a 10-foot feather-duster! Quite mad, but marvellous. And probably one of the best Med marinas I know that isn’t in the middle of a town or city.

Spain’s Balearic Islands are especially beautiful in May. The season hasn’t got going properly then, which means no crowds and not too hot, despite cloudless skies. Glorious.

Sunseekers always handle superbly, but limits can’t be put to the test properly in ever-so-gentle breeze and super smooth seas. What I can say is that the Xenta Smart-Stick docking system works magnificently, but again I can’t report that I’ve tried it in a Force 8.

Our boat had the biggest and most popular 1,200hp MANs and was topping out at 31 knots, but she was relatively heavy – three-quarters full of fuel, full water and with a Williams 325 on her hi-lo, although we’re told this model will actually take a Williams 385 if needed. At half load, we’re assured she’s good for 32–33 knots at a maximum 2,300 rpm and I have no reason to doubt she’ll return that sort of speed.

A brisk continuous cruise would mean diesels spinning somewhere between 1,800–2,000rpm, which translates to around 24–25 knots and a range of about 350 nm. However, for those with a gentler disposition and time to spare, I would suggest spinning those diesels at no more than 1,200 rpm, which means 40 hours at 11 knots or so and almost 450 nm. You’re meant to be enjoying yourself, so slow down!

I love the look of the Manhattan 66 without the optional hardtop, but you would never get the most out of that awesome fly without one.

Despite hefty pricing, only two to date have been sold without those all carbon-fibre lids, principally because of local air-draught considerations (bridges). Unsurprisingly, one of those old was bound for the inland waterways of The Netherlands and the other for the USA’s Great Lakes.

Quoting areas and volumes is interesting enough but walk into this 66 and you will be blown away by the space, not to mention the views and natural light. Simply stunning. All that glass looks great from the outside, but from inside you hardly notice it for all the right reasons, assuming of course that you’ve got this boat somewhere spectacular like we did. The views should demand all your attention, whether you’re at the helm or simply lounging around. If not, change your marina or your cruising grounds! 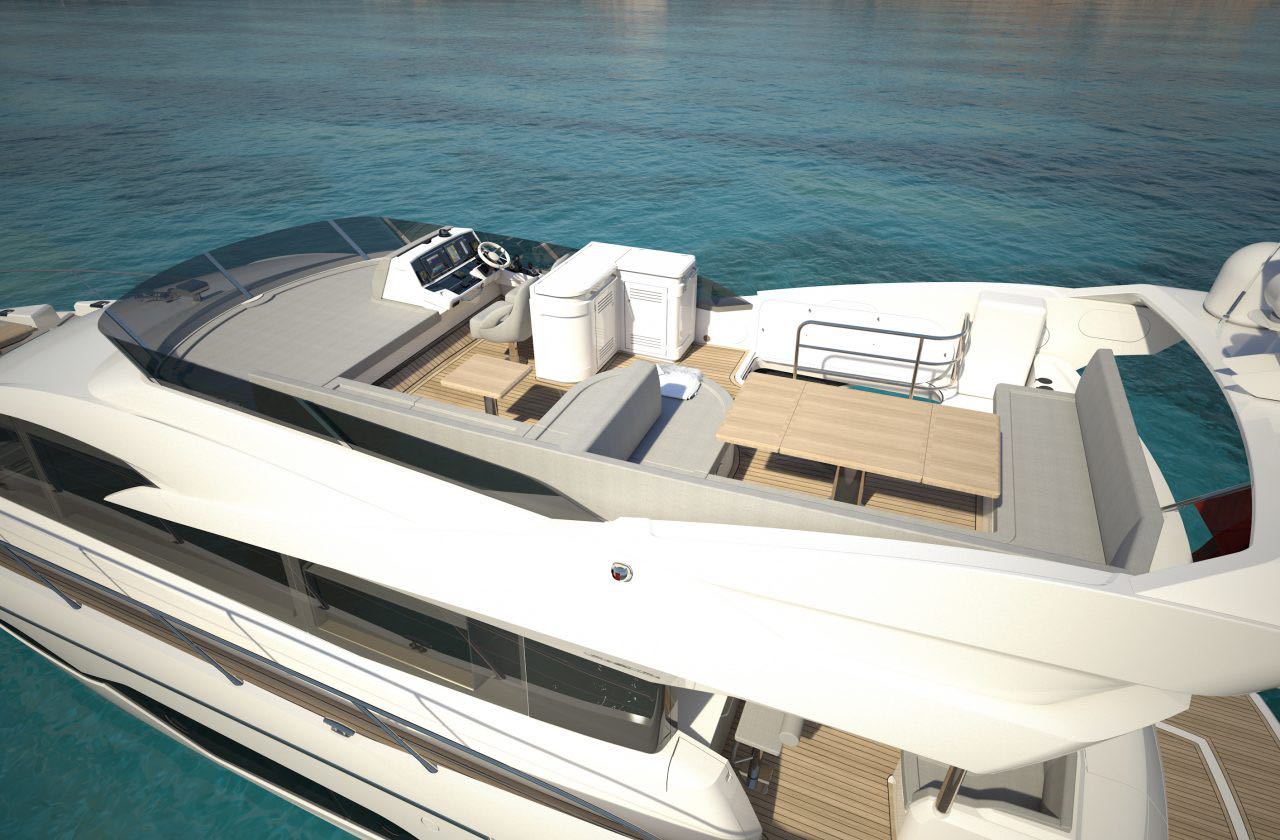 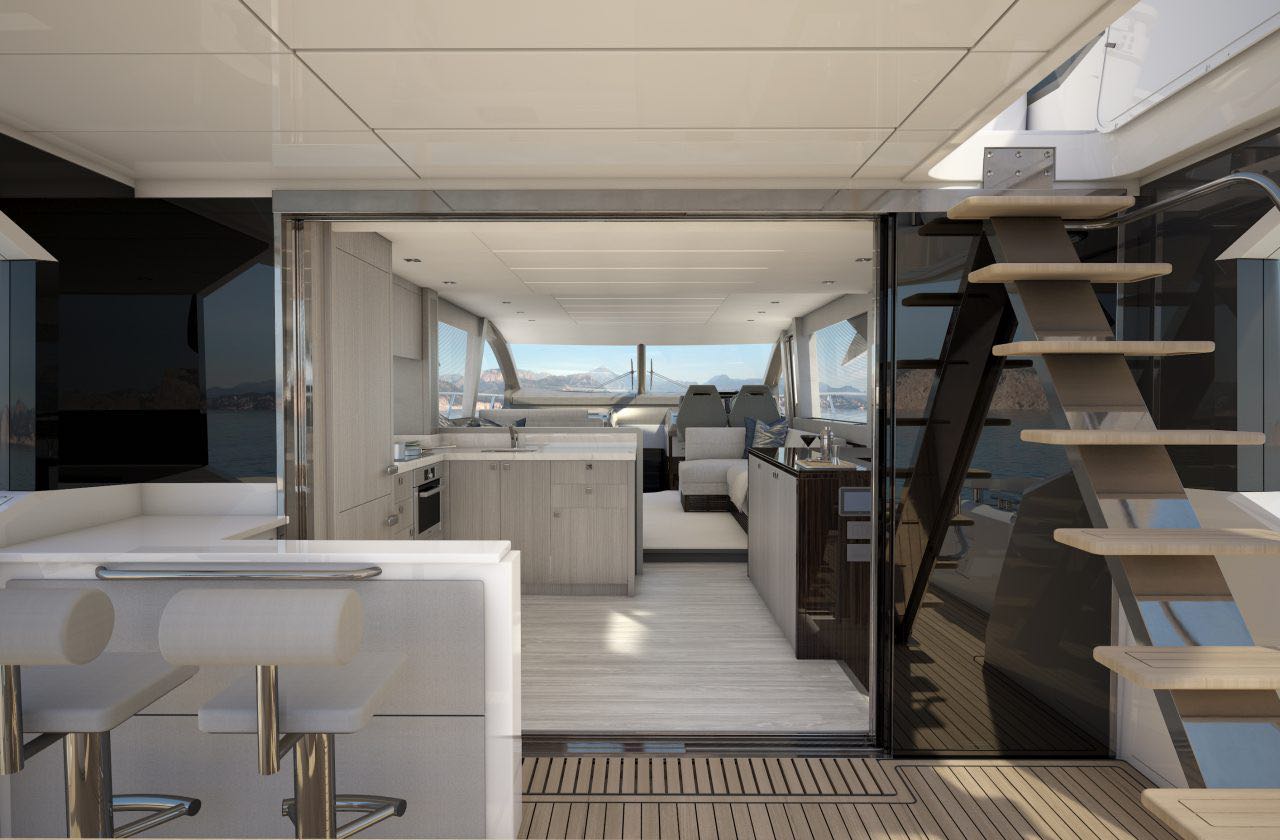 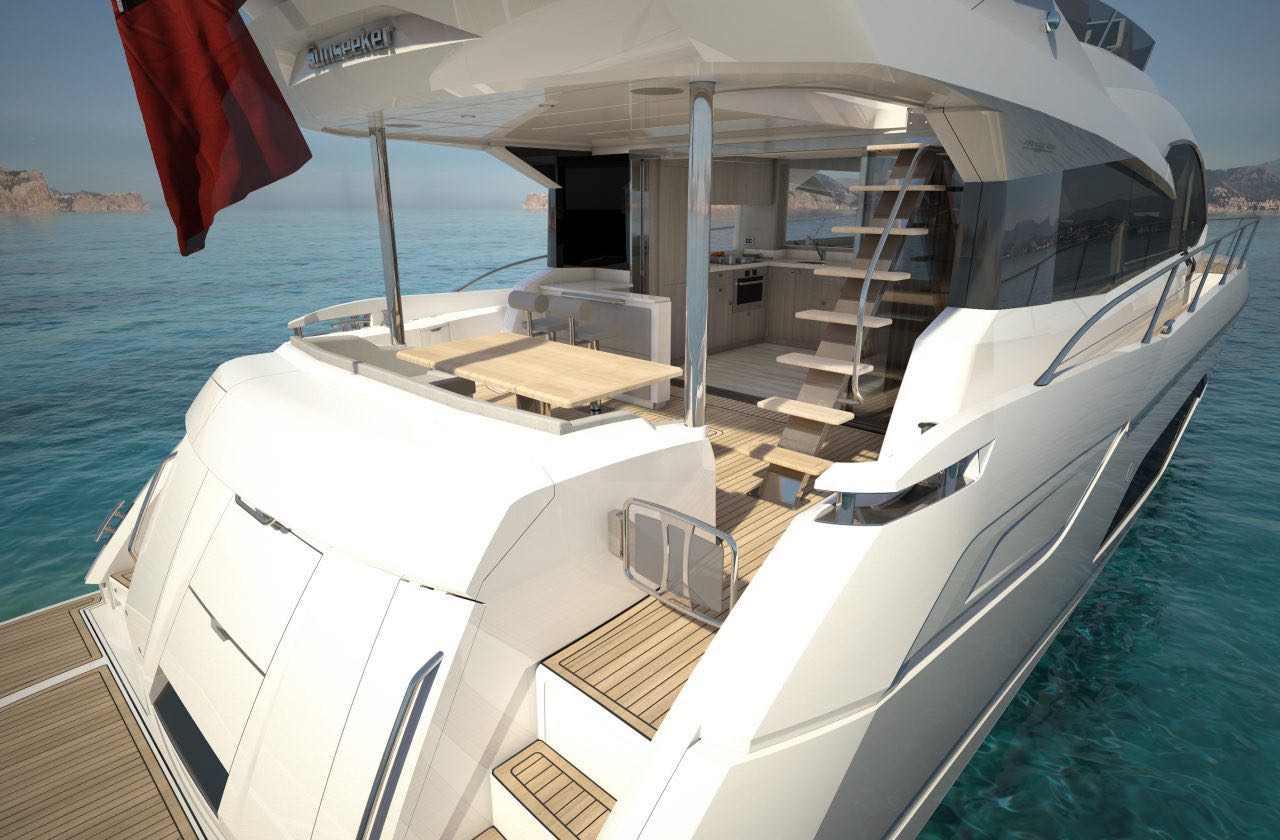 Go see for yourself at the Sydney International Boat Show from 2–6 August 2018.

for the full review, pick up a copy of Ocean Issue #80 here.