Another fantastic ASR Winner’s Cup event one of the highlights at the 17th annual Asia Superyacht Rendezvous regatta.

Welcomed by hosts Mick and Som Cotter upon arriving by tender guests were introduced to world-renowned bartender Salim Khoury  (formerly of The Savoy), mixing up his famous cocktail ‘The Blushing Monarch’, inspired by the late Princess Diana. Ensuring a sumptuous cuisine matched the libations was Executive Chef Fabrizio Demichelis of Phuket’s own Trattoria del Buongustaio, serving up his incredible tapas throughout the evening.

Headquarters for the ASR Cup for the second year, the Sala Phuket Resort & Spa provided the best of accommodations, combining rare historical Sino – Portuguese architecture with luxury hotel facilities. The glittering gem is situation one of the most dramatic settings in Phuket on secluded Mai Khao Beach. 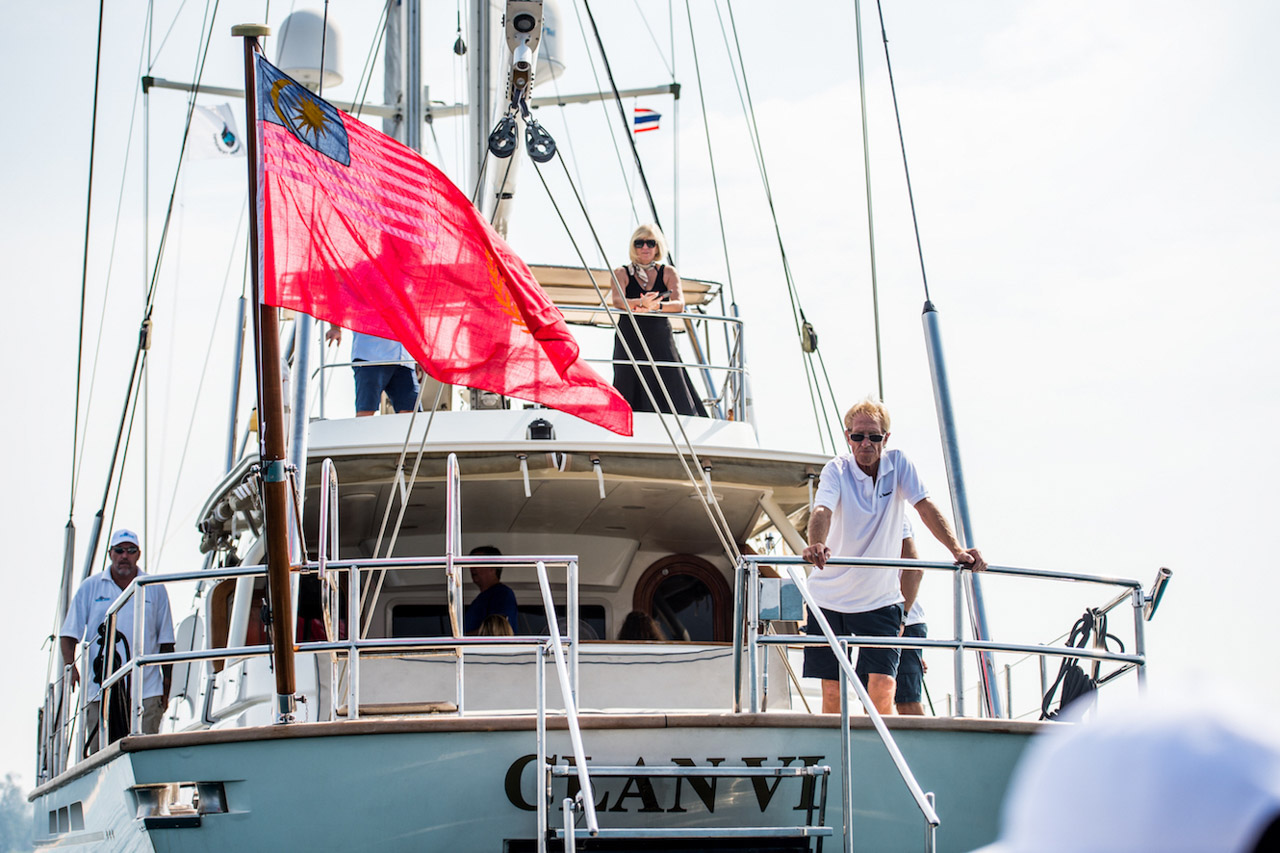 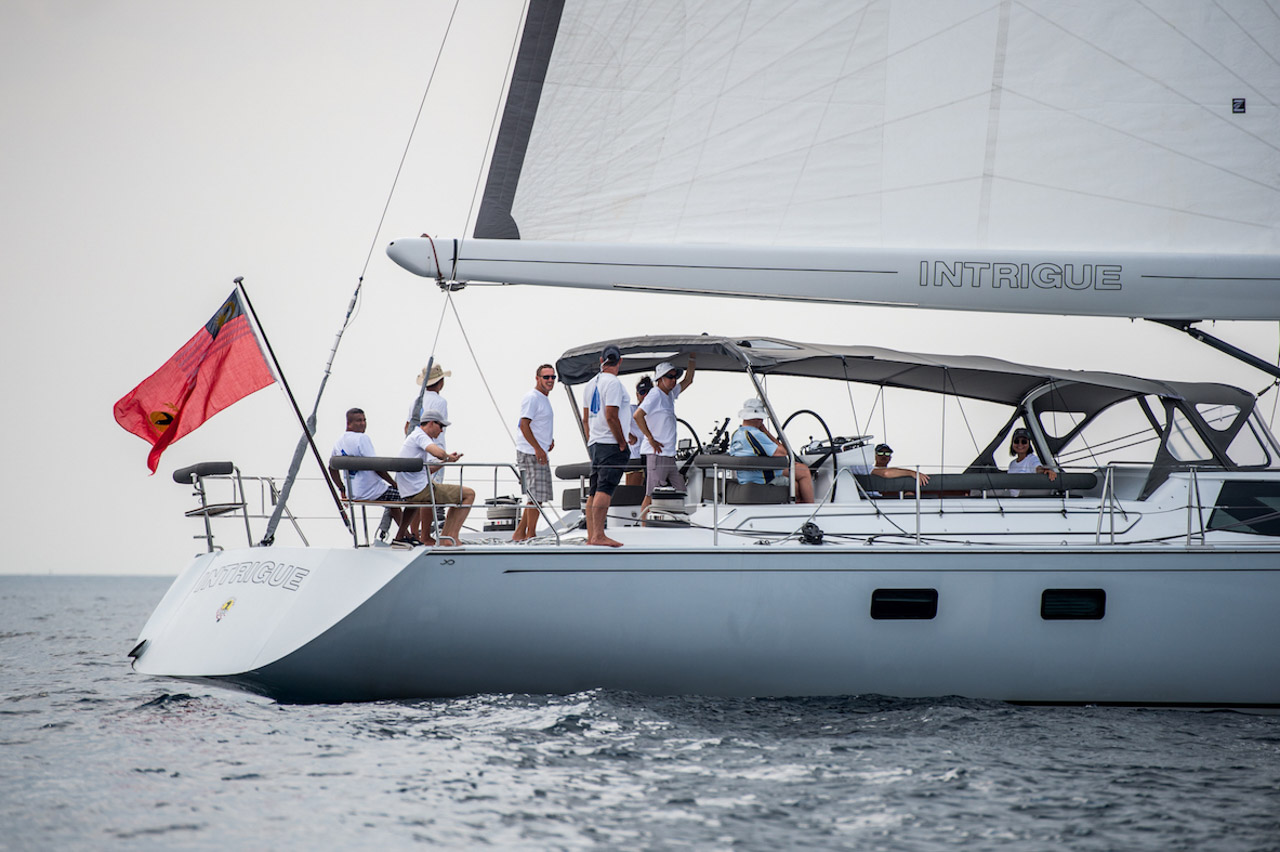 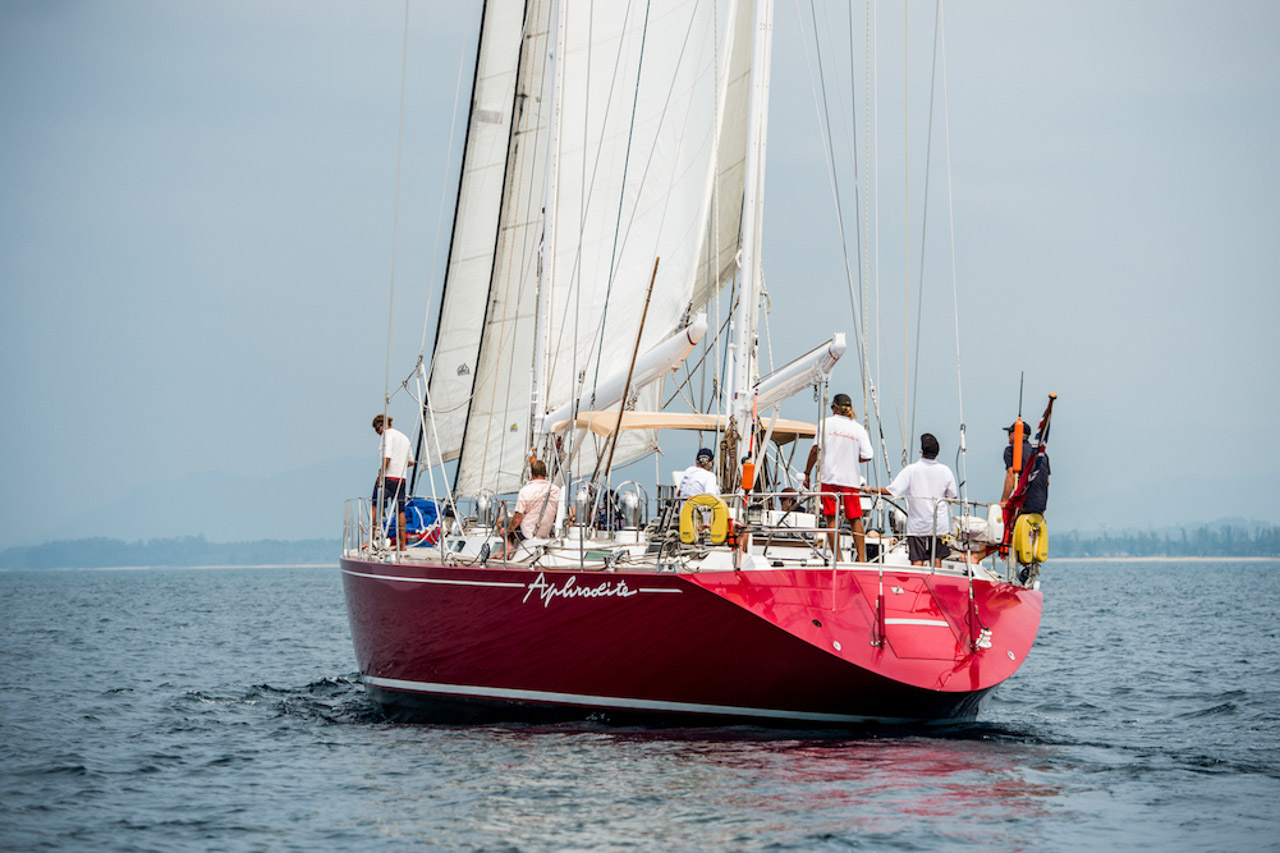 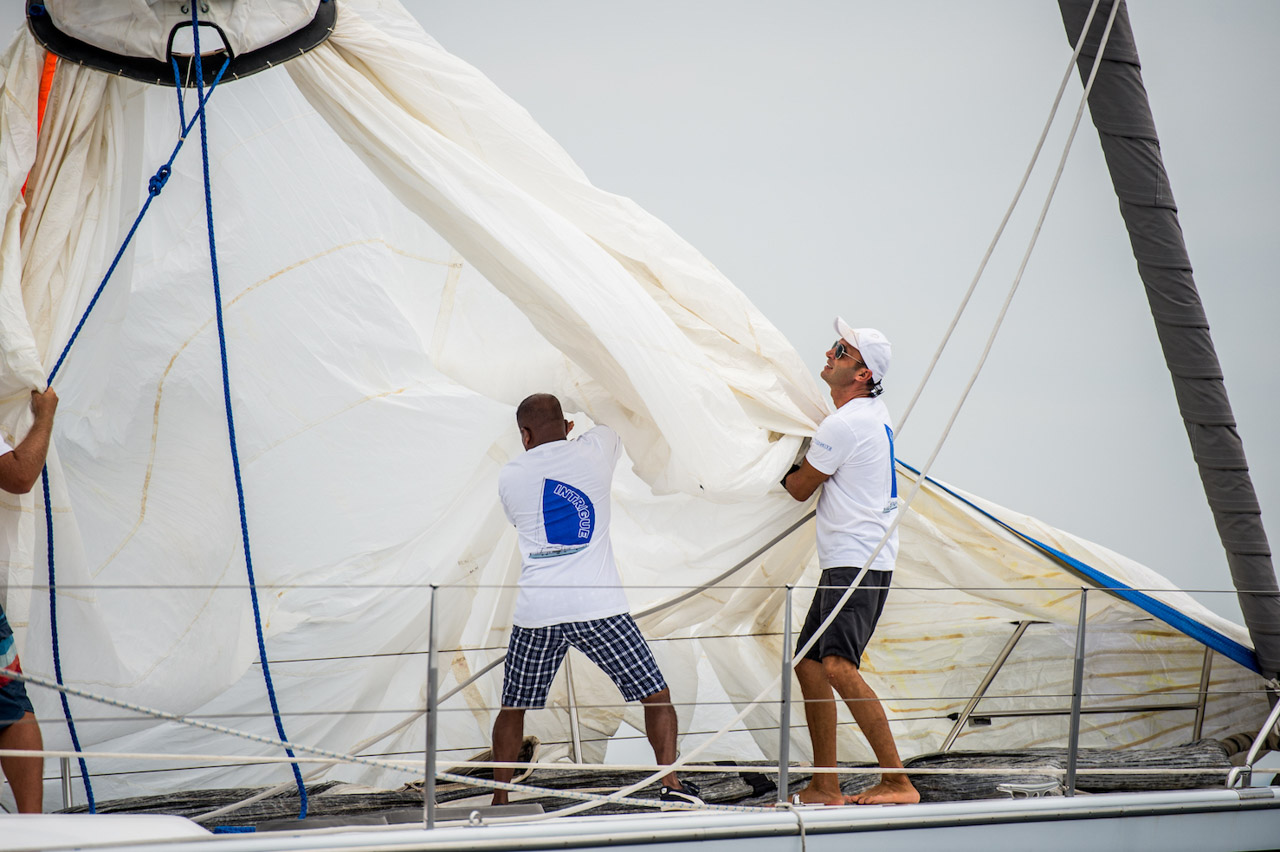 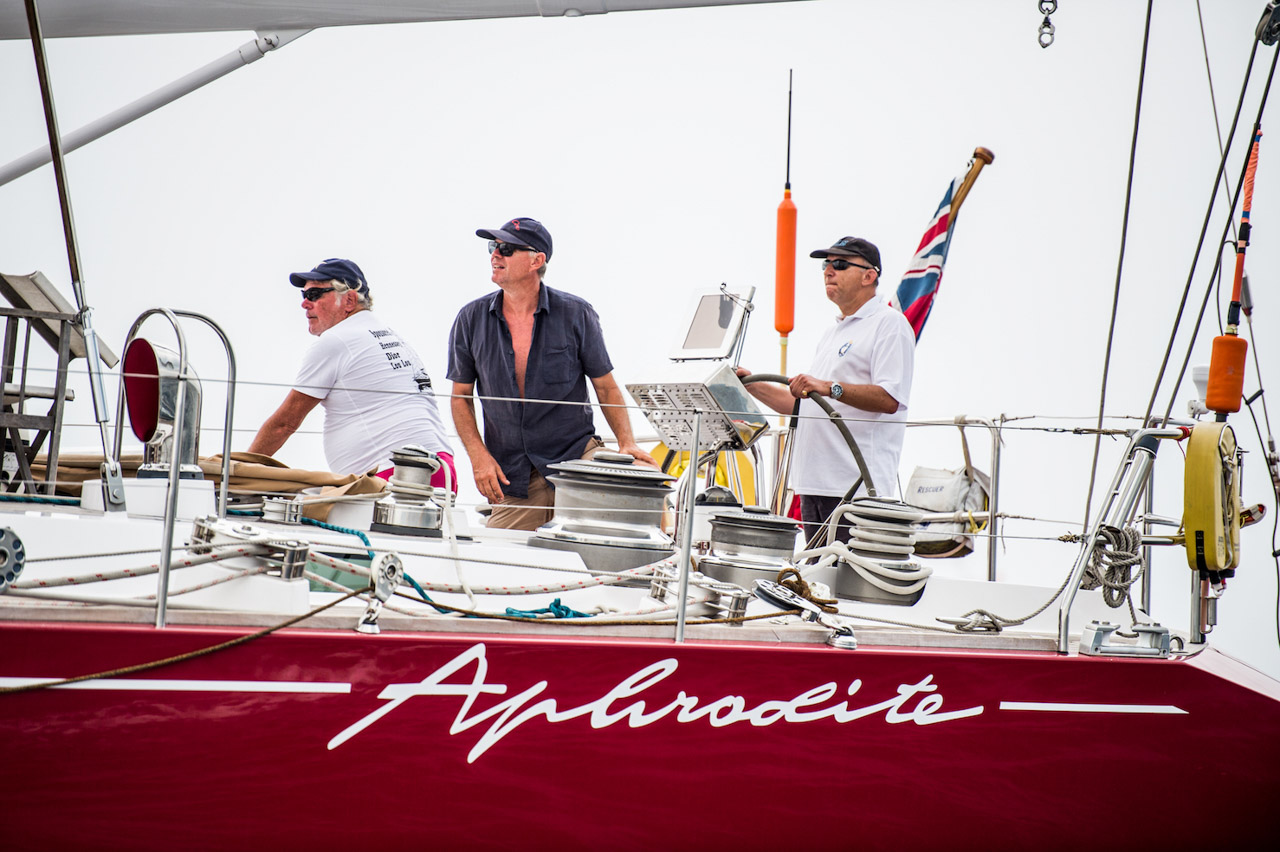 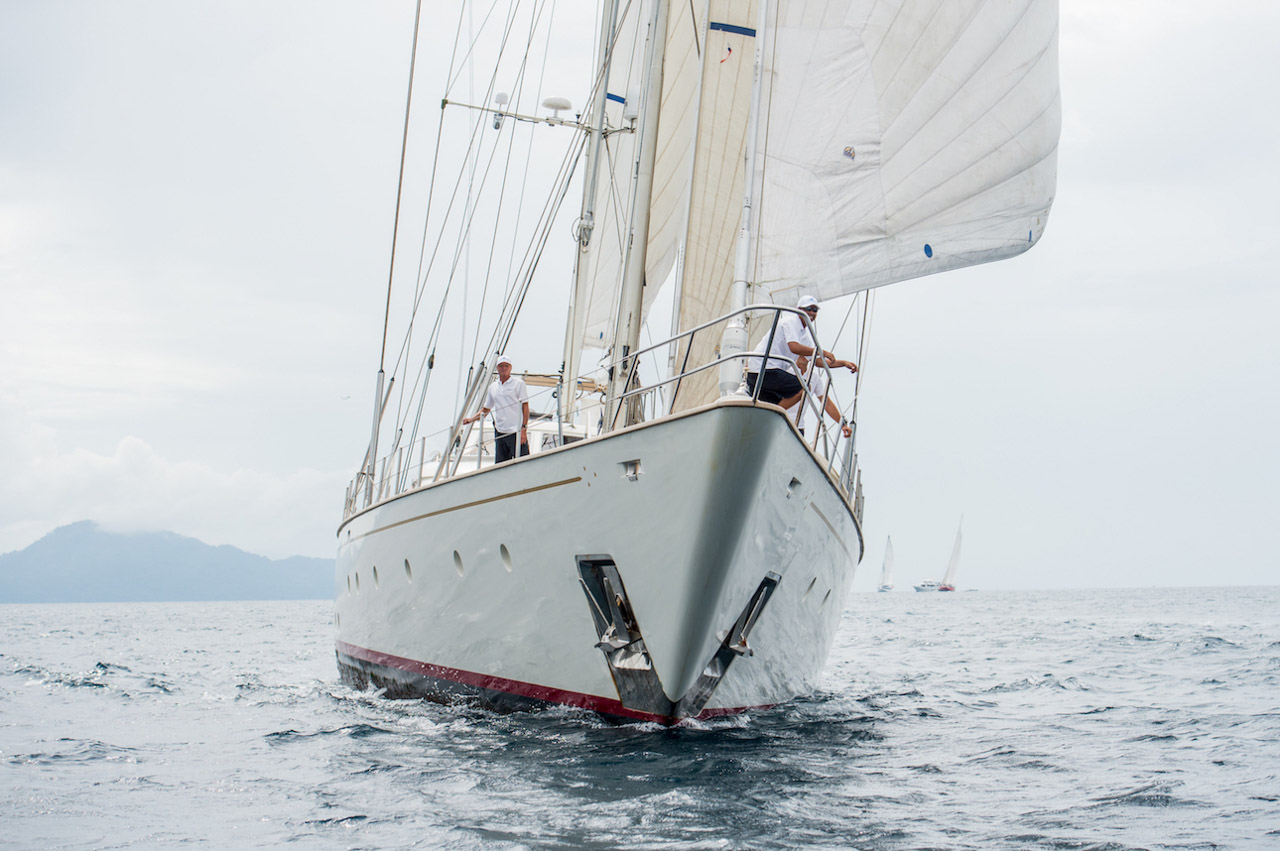 The weather may have been a bit inclement but that didn’t stop the fun or the exciting and highly fought racing on the beautiful waters of Mai Khao Bay from 19 through 21 January in Phuket, Thailand.

The first superyacht racing started the next day, 20 January and S/Y Intrigue kicked things off by crossing the start line 2 seconds early, causing them to have to restart – incidentally at the opposite end of S/Y Aphrodite and S/Y La Numero Uno, giving them a big advantage with wind direction.

The final day of racing proved to be both exciting and unique, getting two races in just after 1pm with great wind and a few scattered showers. Race 1 of day 2 started off fantastically, seeing a 4 second gap between S/Y Intrigue and S/Y Aphrodite by the second buoy.

However, an unfortunate rip to the spinnaker of S/Y Intrigue allowed S/Y Aphrodite to catch up and maintain distance, coming in at the finish just 2 minutes behind.

However, corrected time proved S/Y Aphrodite the winner, leaving both boats with one first and one second place standing and S/Y La Numero Uno with two third place standings.

The final race was run on a straight up and down course using the updated handicaps, which created quite the unique finish with both S/Y Aphrodite and S/Y Intrigue both coming in at 33:05. However, because each boat had the same standings prior to the third and final race, and race three could not conclude the winner with an identical finish, a few quick phone calls were made to a World Sailing Technical Delegate, with confirmation that the winner of the second overall race would be named champion.

It was luxury sailing yacht S/Y Aphrodite named as Overall Winner of the 2018 ASR Cup regatta after two days of intense and highly competitive racing on a course marked and accompanied by expansive motor yachts and pleasure craft.  In the tightly fought races S/Y Intrigue was awarded second place and S/Y La Numero Uno received third place in the 2018 ASR Cup regatta. 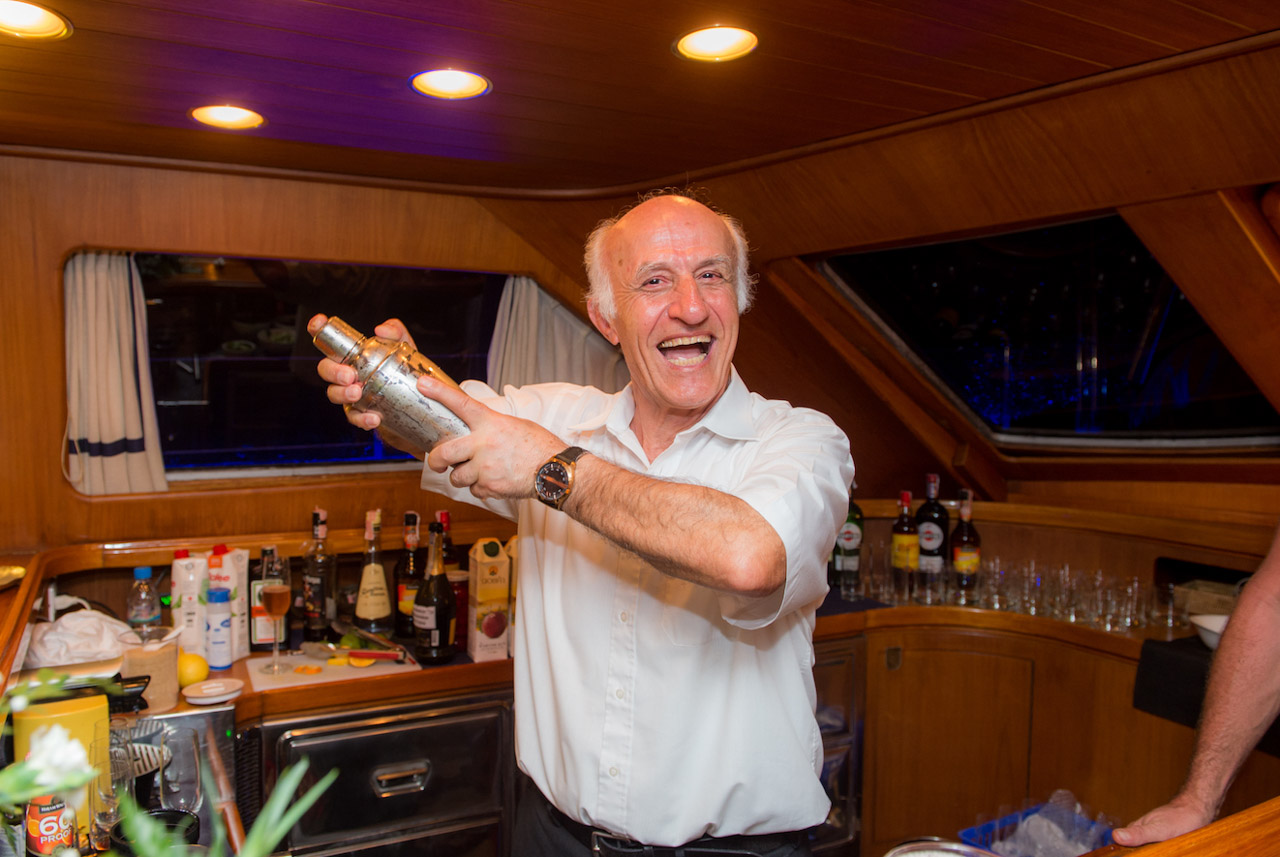 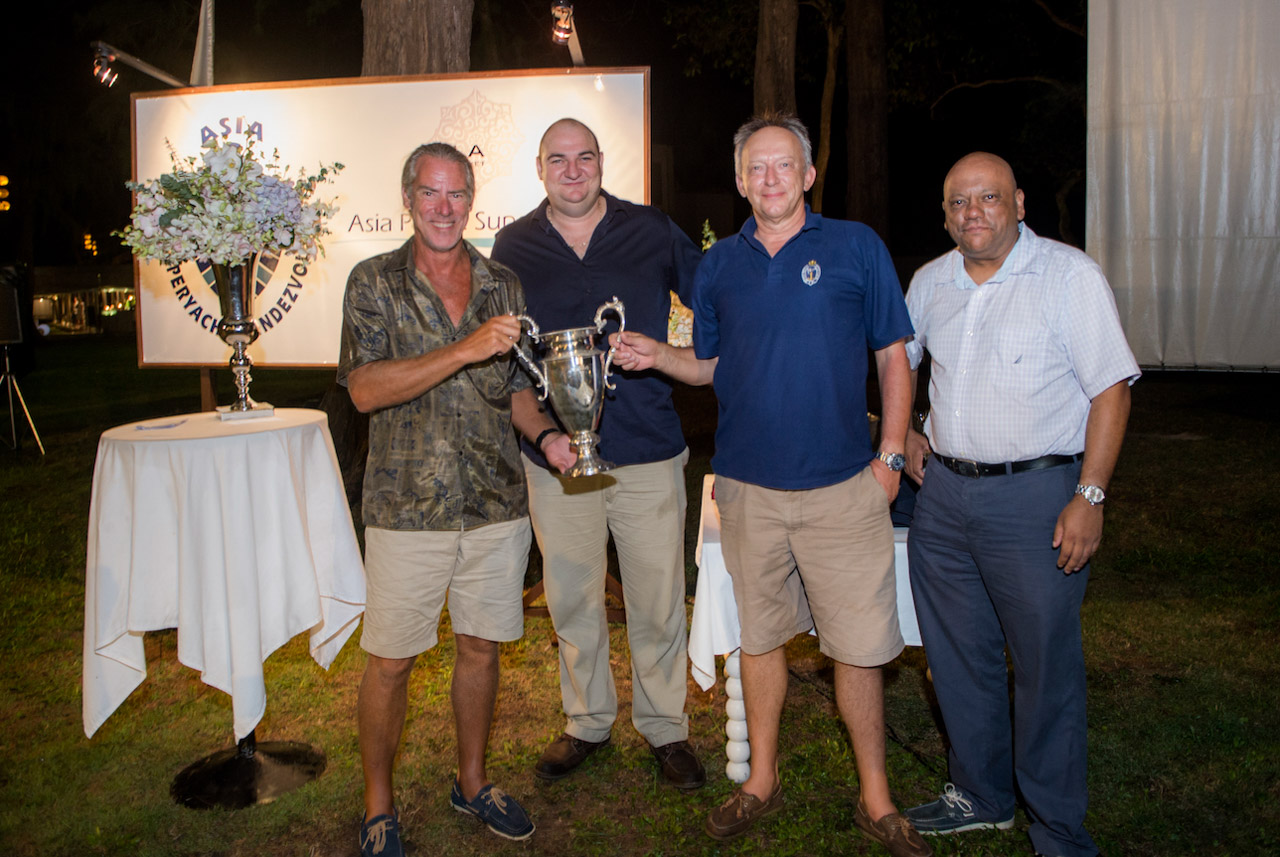 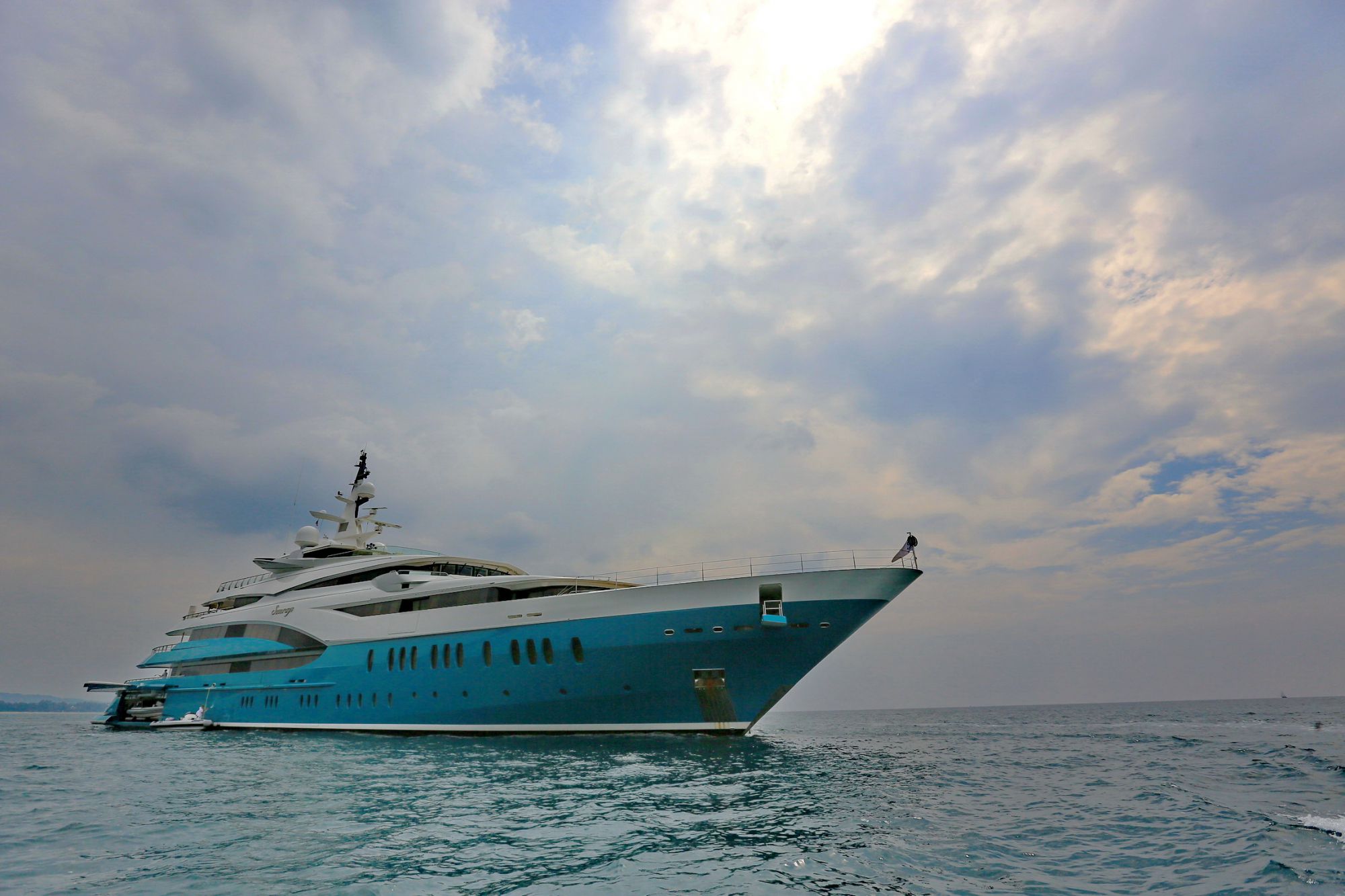 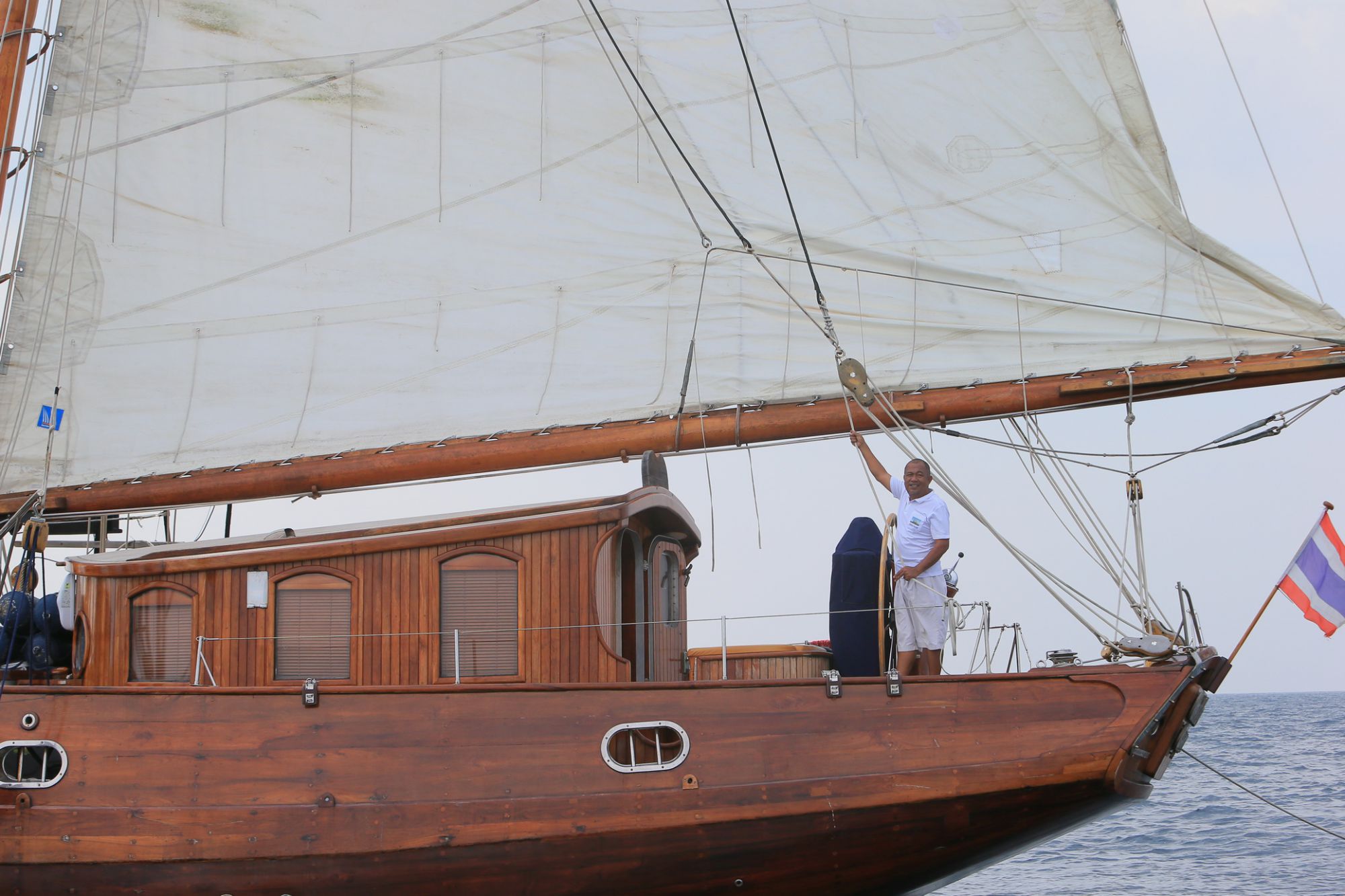 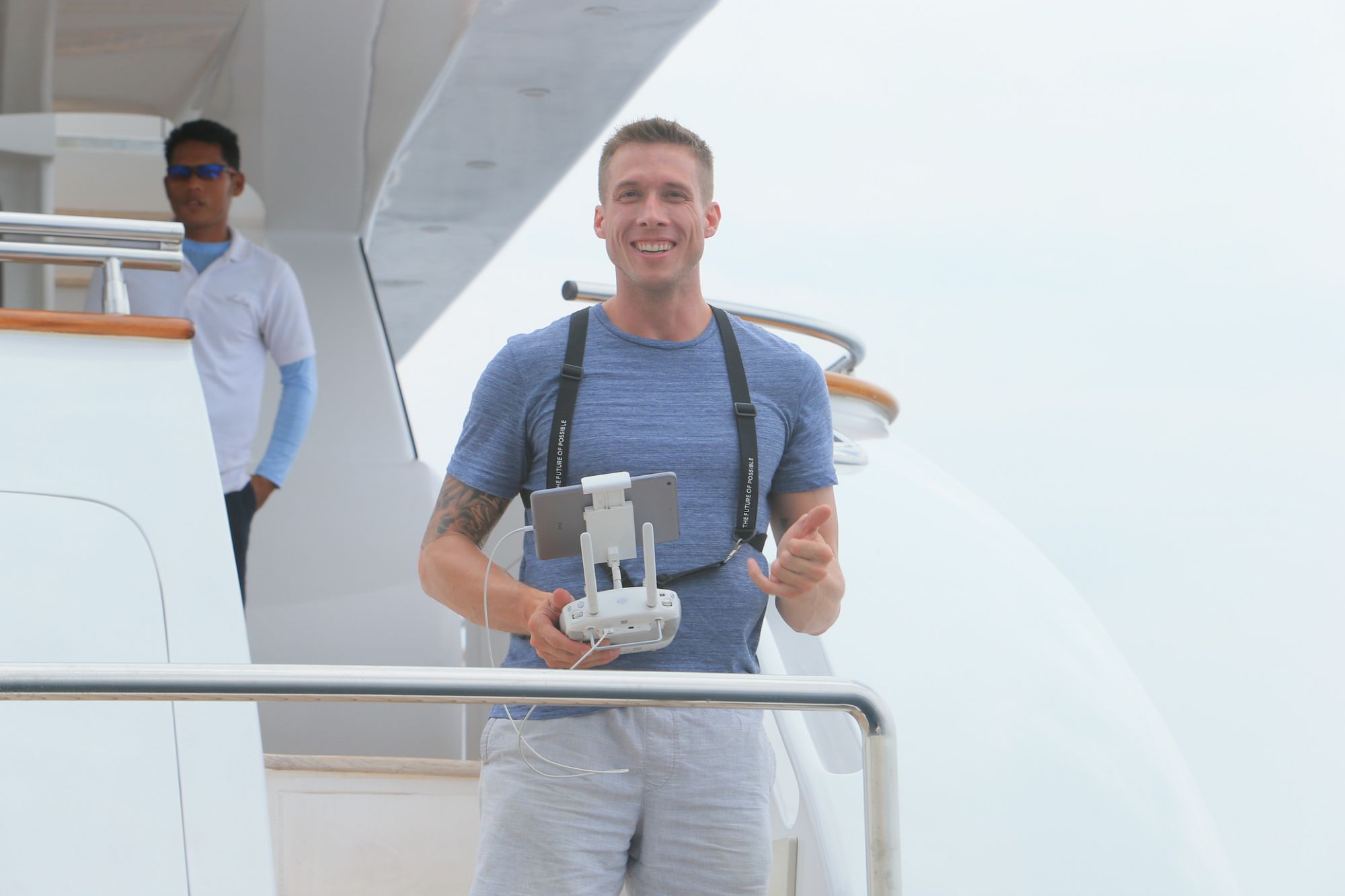 In the evening the Gala Dinner & Awards Ceremony was held on the lawns of the Sala Phuket Resort. Under a starry sky owners, captains and VIP enjoyed the grand finale Gala Dinner, a delicious 8-course meal and libations, as the sounds of Mai Khao Bay’s surf melded beautifully with the stylings of the Colin ‘Illy’ Hill Band.

During the Gala Dinner’s Awards Ceremony Captain Simon Blundell of S/Y Aphrodite happily accepted this year’s annual ASR Winner’s Cup, reclaiming his highly sought victory as the recipient for the second year in a row.

“What magnificent racing… we loved it. This is what we are here for, to have sailing like that with company like you guys. It’s just as good as it gets. We can’t look forward enough to next year.” enthused Captain Simon.

He added “The Feng Shui will now work better in our salon with two trophies, and we’ll be back next year for a third.”

Gordon Fernandes took the stage and thanked participants, saying: “Cheers to all of our guests who came from near and far to attend, we are so happy to see all of your excited, smiling faces”, adding, “And of course much appreciation to Phuket Vice Governor Norraphat Plodthong and the wonderful officials from Tourism Authority of Thailand for joining us for our Gala Dinner”.

The Vice Governor responded, “I am very honoured to be here for this year’s ASR Cup Superyacht Rendezvous. I want to thank the owners and captains for bringing their superyachts to Phuket and am hopeful that they will return for next year’s event. “