Benetti has pushed the design boundaries with the Oasis 40M – fresh concepts transform both the yacht’s exterior and interior, with Rebeca complementing the changed requirements of a new style of owner perfectly.

When Benetti started thinking about the future of yachting, they turned to UK design house RWD and New York-based architecture firm Bonetti/Kozerski with their brief.

The two studios – the former renowned in yachting, the latter newcomers – came up with a yacht geared to a new kind of yachting lifestyle.

“The brief called for interiors that would be very open to the exteriors and the sea beyond, and a yacht with a sophisticated yet informal look where casual, understated elegance would be backed by Benetti quality and care for detail,” says architect Enrico Bonetti.

At the same time, American couple Tim and Rebeca Ciasulli were looking at moving up from their 110-foot Horizon. “We wanted something bigger and more stylish, with longer legs and a larger stateroom,” says Tim.

The couple saw some renderings of RWD’s exterior design for the Oasis 40M and were intrigued. “It had the masculine, explorer-type look I wanted, and I liked the fact it was fibreglass,” says Tim. “It’s a superior material that requires less maintenance.” 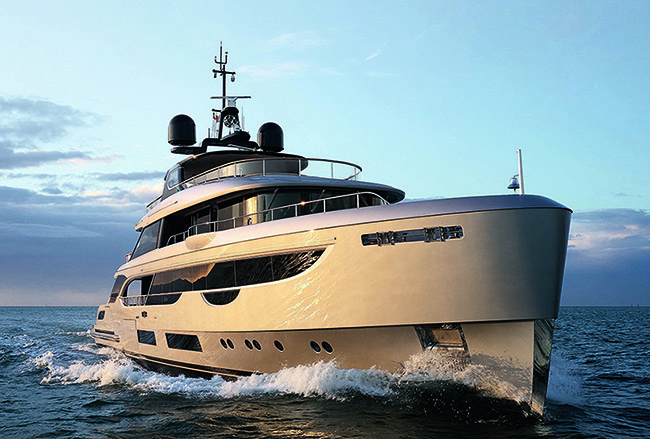 The Oasis 40M is characterised by explorer styling. 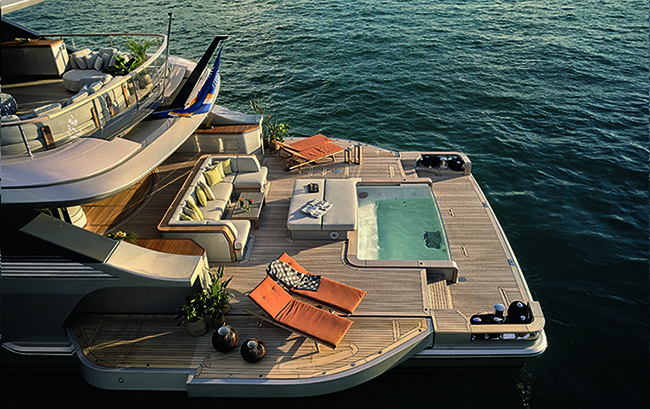 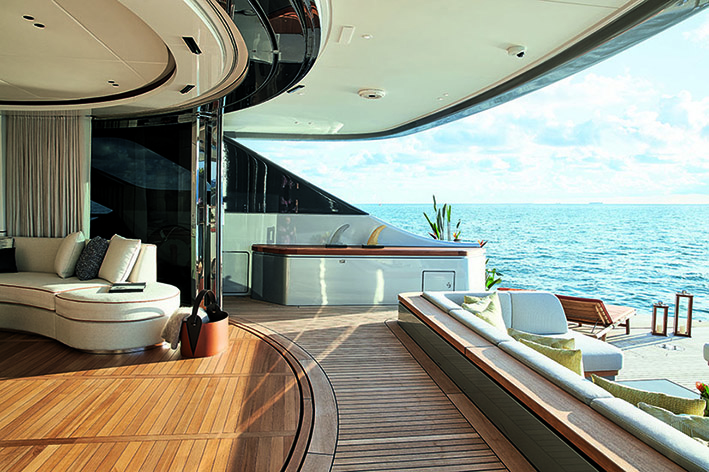 The aft deck seating faces rearward for the view. 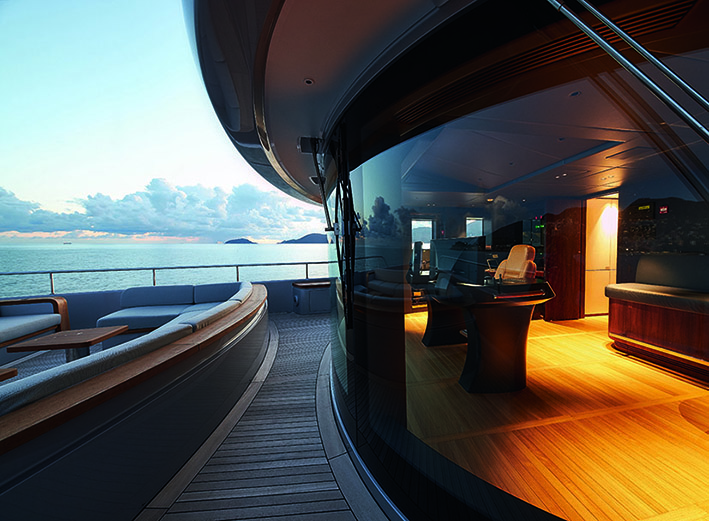 Tim Ciasulli has owned a lot of boats and knows what he’s looking for. “You know how they say Boston Whalers are unsinkable?” he asks.

“Well, as a kid, I managed to sink two of them. I’d go out with my friends to jump the wake behind the fishing boats, 30-feet up in the air in 13-foot boats,” he chuckles.

“I got into some Sea Race sport boats, then I got a Sleek Craft jet boat. But still I was tinkering around, trying to make it faster, more slippery, because I was racing guys with similar boats.”

Even after establishing a successful car dealership and starting a family, speedboats still drew him in.

In 1983, he was runner-up offshore world champion in his 33-foot Sutphen, and in 1984 he raced for Chris Craft on a 30-foot Chris Cat. In 1985, he set a speed record of 117.8 mph aboard his own stretched 37-foot Chris Craft before a series of deaths and injuries on the Key West circuit rattled him.

Still, after a 10-year break, Ciasulli was back, winning aboard Planetman, an “unbelievable” 46-foot Skater cat with two 1,250 hp Sterling engines.

But, after setting a 169.94-mph speed record at the Key West Super Boat National and World Championships, he was injured and reached a turning point.

“I had won 100 races after competing in, probably, 300. It was just a matter of time before I killed myself. I got out of the boat, kissed it and said, ‘I’m selling you. Not because I don’t love you, but because it’s time for me to move on.’”

In his second life as a boat owner, Ciasulli wanted spaces for entertaining and a real indoor/outdoor connection. “All the shipyards talk about how the lines between indoors and out are blurred, but we found all they were doing was putting bigger windows in the same, classic-style yacht,” he says. 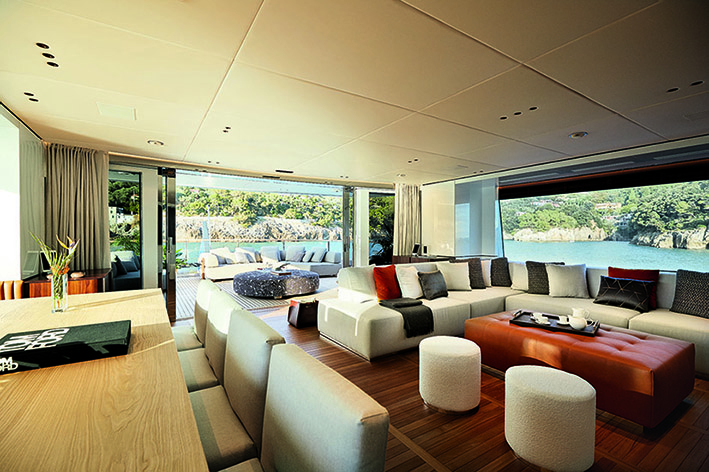 The upper saloon and bar is the main, casual hang-out inside. 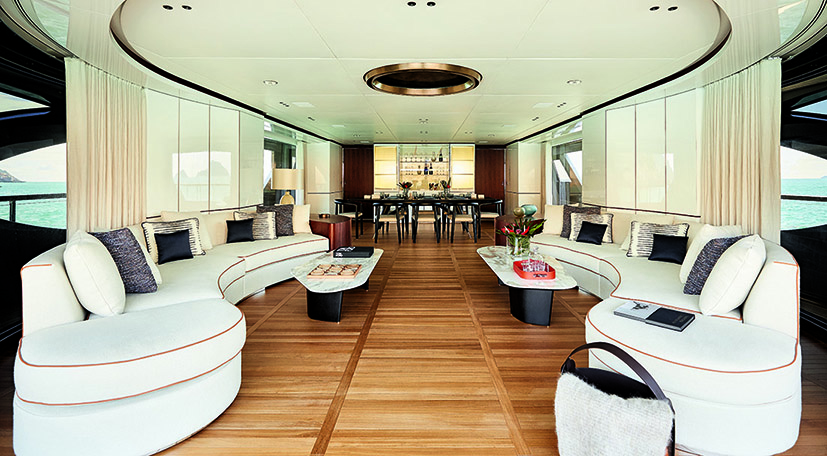 The main deck saloon with formal dining and lounge.

It was clear the Oasis 40M offered something different: the yacht literally opens onto the sea with a 60-square-metre private beach.

“People use their boats differently now,” says Adrian Chisnell, Team Principal at RWD. “They want excellent access to the water and lots of storage for tenders, toys and sports equipment. They spend less time lying in the sun and more time enjoying and experiencing the places they have travelled to.

“For the Oasis 40M, we designed an aft area where the transom and side sections fold out. It then becomes a huge terrace that can be used for anything from a swimming platform to a disco floor. Tenders are launched from a forward area so that life aft can continue undisturbed.”

Another feature the Ciasullis loved was the main saloon’s aft curved glass doors.

“When the doors are open, it’s one big space from the bar in the back of the main saloon all the way to the transom,” says Ciasulli. “We knew we could entertain 40 friends without having everyone jammed up in the one space.”

On top of the size of the aft space, the Ciasullis liked the set-up. “On the aft deck, the best view is looking back to the water, not forward to the saloon. So when we saw the Oasis – whose aft deck set-up includes a couch, table and infinity pool, all facing the water – we thought it was great.”

The Ciasullis were equally enthusiastic about other spaces. “The sundeck is huge, it’s like an aircraft carrier – we could see there was room for a lot of fun,” says Ciasulli. 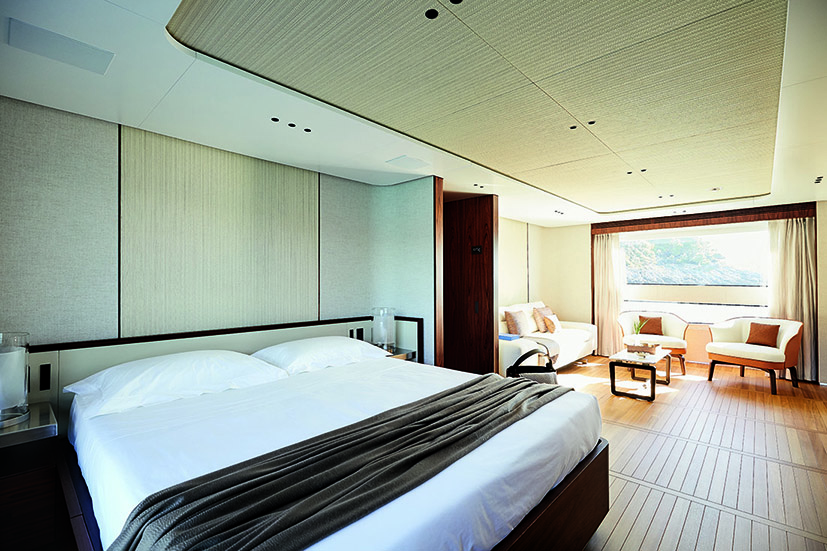 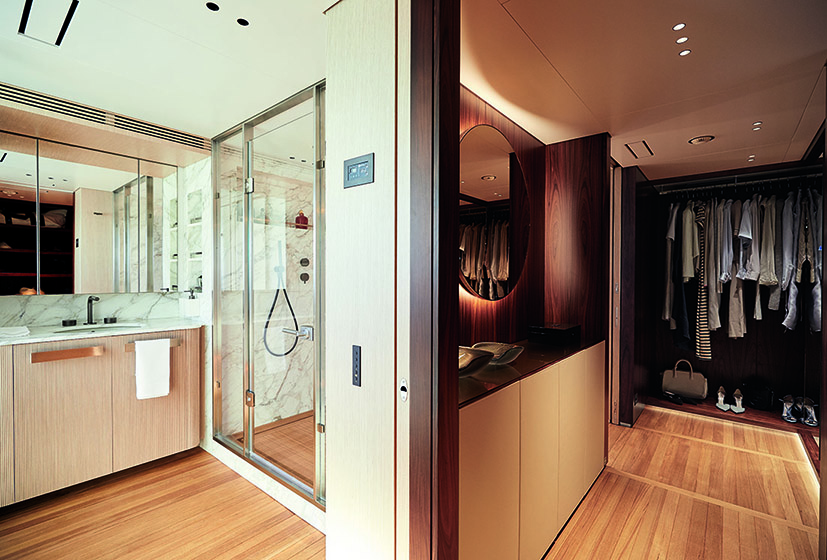 Ciasulli is a businessman at heart, and before taking the plunge on the first hull in a new series, he wanted some reassurance. He called up an old acquaintance, John Staluppi – a serial superyacht owner and the man behind the Benetti custom yachts Diamonds are Forever and Spectre.

“I had a few questions for him, so we got together,” says Ciasulli. He liked what he heard. “We inked the deal in July 2019 and spent the next month meeting with Enrico Bonetti in Italy,” he says.

“In just a couple of meetings, we nailed everything we wanted. The process was so easy – the Benetti design centre has everything in one place. You say you saw a faucet, and they come back minutes later saying, ‘Is this it?’ “And yes, that’s it, and you can also have it in bronze. We made a lot of decisions quickly. It was fun.”

While customising interiors to suit your style is always enjoyable, the yacht itself has to offer spaces that accommodate your lifestyle. “Guests really interact with their crew, and they do it differently than they would have even just a few years ago,” says Chisnell.

“Now, you will often have crew who are also yoga or water sports instructors – they are spending quality time with guests so we made the bridge into an area where crew and guests can discuss plans for the day then enjoy participating in the yacht’s operation.

“This blurring of lines between crew and guest areas means that guest spaces increase, boundaries are less distinct, and all the yacht is available.”

Ciasulli has found that Rebeca’s outdoor spaces attract guests, but its unusual bridge attracts captains. “When you see it in person, it’s like Star Trek!” he says of the Seastema integrated interface.

“There was a lot of thought given to what you need in a bridge – all the captains come and look at it.”

Flexible, adaptable and interpretable is how Chisnell describes the Oasis. “We have to design yachts so people can use their time on board well – no-one wants to tow around underused spaces,” he says.

There is one thing that Ciasulli does enjoy towing, however.  “Alongside Rebeca, we have a 43-foot carbon Midnight Express that goes 100 mph. I can take friends out and scare the hell out of them!”

Ciasulli is also happy to have spotted a trend. As he recounts, “I met with Benetti yard owner Paolo Vitelli and said: ‘You’ve sold lots of boats, but I predict your daughter Giovanna, who had tremendous foresight and took a risk in developing a boat so different, is going to beat your record.’ Vitelli looked at me and said, ‘It would be my honour.’

“The style of this design is so appealing, especially to younger buyers, that it’s going to shatter the paradigm of what a boat should be and do, and how it should function. It has it all.”

But has Rebeca lived up to Ciasullli’s expectations? “Absolutely,” he enthuses, beaming like a man who has indeed found his oasis.

Title partner on board

Title partner on board