Maritimo’s new X50 sport yacht has been become an instant hit, with its potent combination of versatility, space and solid bluewater credentials.

You don’t know exactly when it will happen, but one day – or even more unsettlingly at night – it will happen: a large breaking wave will loom in the windscreen, and in a split-second you will be engulfed. If you are on Maritimo’s new X50, you can be confident about what happens next. The boat doesn’t flinch, spin or shake. It simply holds its line and tracks true out of harm’s way.

This isn’t an imagined scenario; it actually happened as the first X50 – Maritimo’s stylish addition to its acclaimed sports yacht range – tackled the Yamba bar en route to the Sydney International Boat Show. The X50’s designer, Tom Barry-Cotter, was on board for the bar crossing and remembers the delivery crew had timed the sets when a rogue wave “stepped up right at the end”. In a video posted on Facebook you see the white water roll up over the bow and, disconcertingly given the X50’s high freeboard, smash against the boat’s toughened windscreen glass.

According to Barry-Cotter, the X50 punched through the big swell with “no issues”, which shouldn’t be a surprise given Maritimo’s well-deserved reputation both for rugged reliability in challenging conditions and for superior build quality. Nevertheless, it underlines why Maritimos are the choice of those seeking to undertake serious bluewater cruising in a sport yacht, without compromising on performance, comfort or luxury. 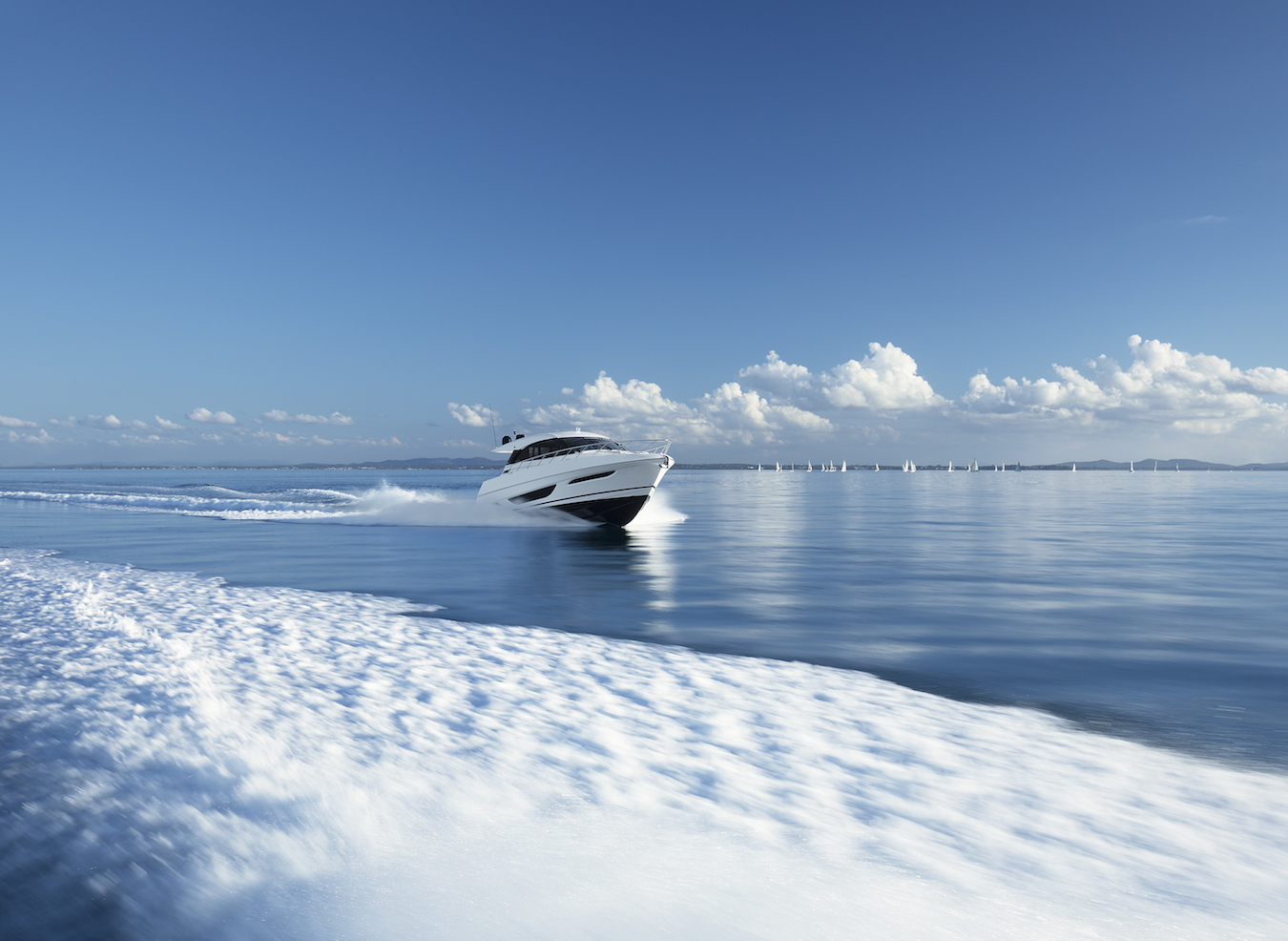 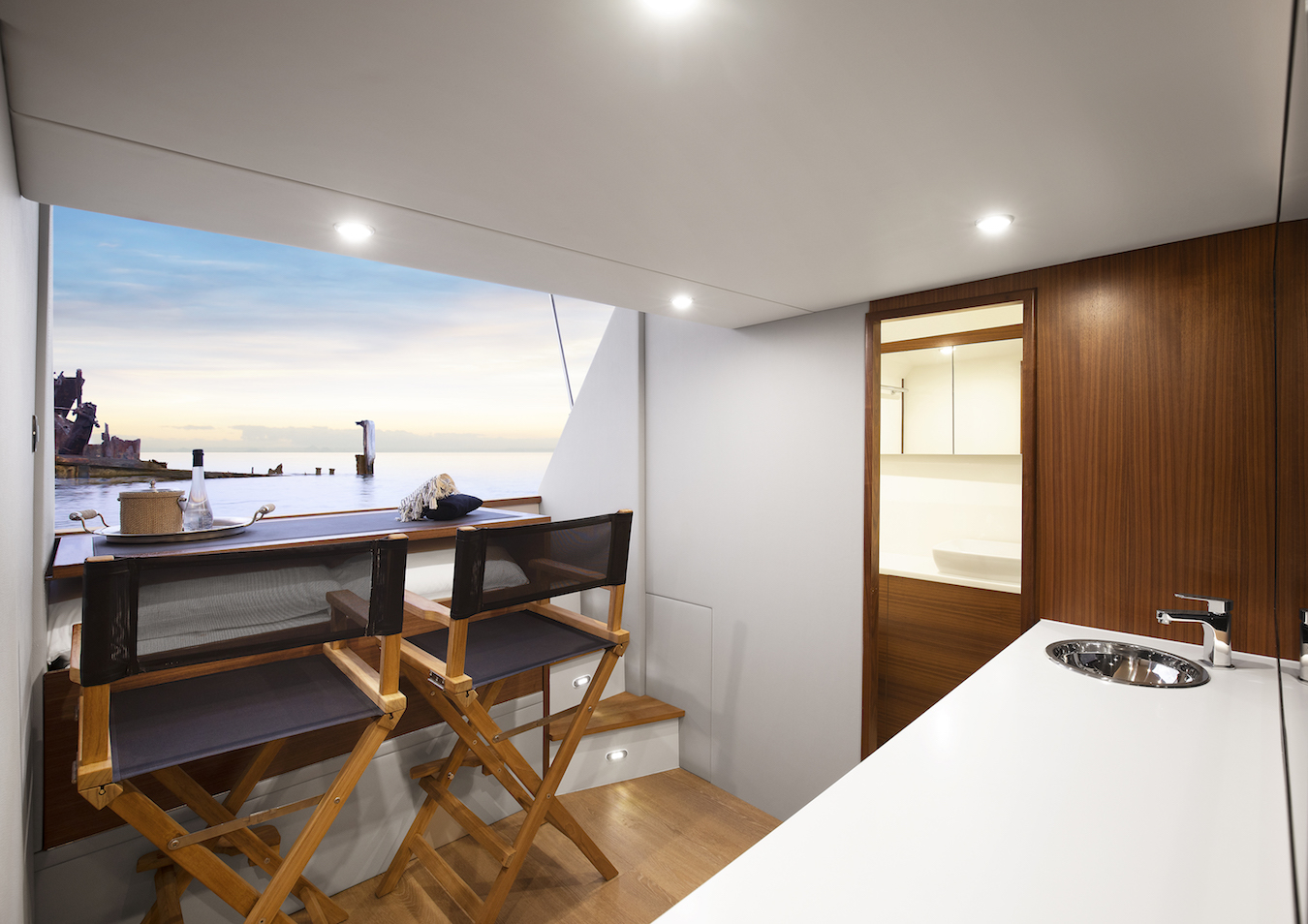 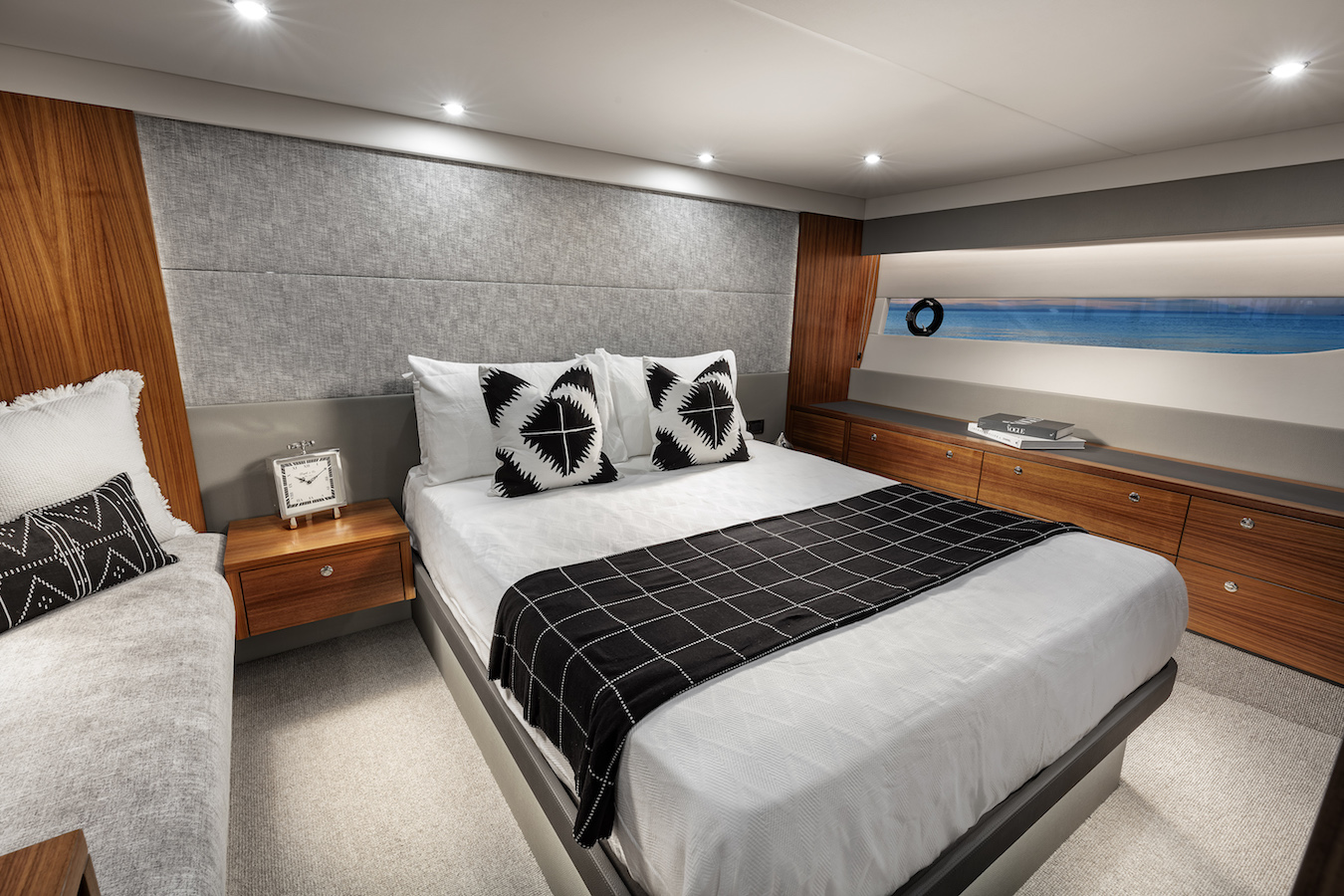 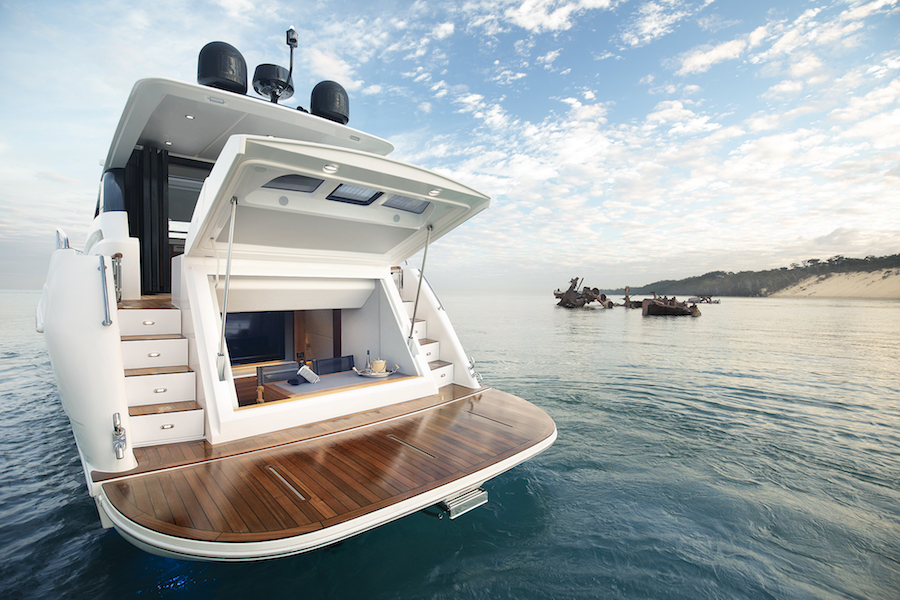 That point was emphasised to me when I stepped on-board the X-50 for a test a few weeks later. Again, the weather was fairly ordinary – a gale warning, and two- to three-metre seas, with the odd four-metre drawer contents re-arranger. Some brands with less confidence in their product’s offshore pedigree would have a found a reason to postpone – after all, the sea will find any weakness and ruthlessly exploit it – but not Maritimo.

My first dockside impression of the X50 was presence. Next to a flybridge cruiser, the X50’s sculpted lines immediately pleased: more camber in a lot of the curves, more curvature than some of the lines on the X60, its larger sibling. Barry-Cotter’s background in industrial design is subtly apparent in the way form and function are melded. The style line on the side of the hardtop, for example, is bevelled out to allow just a little more room for the upright pantry and fridge. Styled gutters that run the length of the hard top and down the window mullions channel water from hardtop away from windscreens and direct drainage over the aft steps, so they don’t empty onto a seat or in the cockpit. The step line on the side of the hull, below the stanchions and above belting, is to stiffen the panel area.

The X50’s hull shape isn’t just a smaller copy of the X60, but in common with all Maritimo hulls it is shaft driven and very efficient right through the cruising range, from 10 to 30 knots.

“We’ve taken characteristics we like from the 60, and from our other boats, and combined them,” explains Barry-Cotter during a generous personal tour of the X50.

“We feel (shaft-driven) is the most superior propulsion system out there. Our mission,” he adds, “is to create the most efficient shaft hulls in the market so you don’t have to slide everything back in the hull trying to fit as much in, so the engineering is a little forward of where it would be in other sport yachts.”

The sports yacht segment makes up more than 80 percent of the overall boating market, and due to the shaft drive engineering configuration the X50 enjoys a genuine point of difference and advantage over its competitors: its beach club. Effectively a terrace adjoining the swimming platform, and a ubiquitous superyacht feature, the beach club is a highly versatile space that sets the X50 apart from others in this crowded category.

Relaxing at the water’s edge bar, you can watch a wall-mounted TV, with refreshments a few steps away in a wine or bar fridge. A hydraulic swimming platform grants direct access to the ocean, for water sports or for just chilling out in aqua-friendly chairs. When it’s time to wind down after the day’s activities, the transom door simply closes with an air seal, but ambient light still illuminates the stateroom via a window in the door and an opening port in the starboard side of the hull. A double bed folds out of the bar and – combined with the spacious ensuite to port with shower, head, and vanity – creates a generously proportioned third cabin with its own internal access.

Initially the beach club was offered as an option, but it’s proved so popular it is now the standard configuration, with a twin bunk layout and a tender garage offered as alternatives. The siting of this stateroom aft also allows extra space for the master and VIP staterooms forward. The full-beam master exudes an undeniable luxury ambience, with high quality materials and satin walnut veneer. It’s spacious enough to allow a day bed, desk and an assortment of deep drawers necessary for extended cruising. The cabin has its own ensuite with a large shower and seat, separate frameless glass shower screen, fresh water flush head, vanity and mirrors, Corian bench top, robe hooks, and a hand towel rail – all laid out with ease of spending time at sea in mind.

Testing the new Maritimo X50 in rough conditions off Sydney.

The forward VIP stateroom utilises the extra volume to good effect. The queen bed is angled to starboard with ample headroom to get around the leading side, and with wide access on the opposite side. Maritimo’s focus on taking the interior style to the next level is reflected in tactile, natural textures such as those used on the bedhead which are complemented by the quality of the fittings in all the ensuites. The VIP bathroom with shower, toilet and vanity doubles as the day head.

As mentioned earlier, my hit-out in the X50 took place on a day when every other boat was riding-out a 30 knot south-westerly in the relative security of their marina pens. We deftly manoeuvred out of a tight berth with the optional EJS – joystick controller – for the mains and thrusters. It’s an AU$100,000 optional extra but completely worth it if you intend to cruise short-handed.

The wide walkaround side decks make for easy and safe access forward to the double sun pad, but this was not the kind of day for a mankini, or any other kini for that matter.

We rounded Barrenjoey Headland and were immediately lashed by at least 2.5 metre swells that built off Warriewood with a cross-sea thrown in for good measure. Apart from a minor wiper malfunction, the X50 took it all in her measured stride. That’s a result of the in-built integrity of the hull’s solid fibreglass bottom with cored topsides, which also has a fully moulded grid liner that structurally stiffens the hull and forms the engine room liner and accommodation landings. Benefits include strength, dissipation of vibrations, and a GRP-moulded finish throughout engine room.

The boat’s beautiful balance is achieved by siting the heavy engineering over the centre of buoyancy, selecting the right shaft angles, and utilising wing fuel tanks. When combined with the built-in hull integrity, the cumulative result of all these design features is an exceptional ride. At no stage – not even when the wave pattern turned decidedly nasty – was the X50’s composure in question and, further, there were no squeaks, rattles or crashes. In fact, it was quiet enough to interview Phil Candler, Maritimo’s General Manager, for OceanTV as we powered along, enveloped in spray.

The steering was light and positive via the very cool three-spoke wheel, while all the critical readouts were efficiently displayed on the twin Simrad 18-inch screens. The twin helm seats supplied by Pompanette and the details of the stitched helm surrounds evoke a high-end automotive feel which will be greatly appreciated on long stints offshore.

Given the conditions, there wasn’t much opportunity to fully enjoy all the amenities of the X50’s cockpit but on a balmy afternoon, anchored off a semi-deserted beach, the teak table with Euro-style lounge would be a focal point for a very long and convivial lunch. A bar fridge drawer and barbecue supply the necessary accompaniments.

Bi-fold doors extend the whole space alfresco into the saloon, with its galley featuring plenty of storage and refrigeration. Bench spaces are optimised for long distance cruising, but the space is eminently capable of hosting swish weekend soirées. Appliances are top-of-the line and include a Miele package with a two-door fridge, speed oven, and four-burner cook top. The dishwasher is Fisher & Paykel, and a handy icemaker is integrated into the island bench.

Simplicity and function are Maritimo hallmarks, and the X50 overlays these attributes with outstanding technical and engineering quality which enable a potential owner to realise their dreams of weighing anchor for new adventures. The beach club aft cabin puts the X50 in a league of its own, without compromising on Maritimo’s prized performance, toughness and reliability.