The future of flying?

Blackshape Prime has landed in Australia, with an aim to drastically reduce flight times for those on the go.

Fresh out of Italy and made from the same technology as a 787 Dreamliner, the Blackshape Prime aims to set a new benchmark for recreational flying. It only landed in Australia late last year and is  apart from other two-seater aircraft on the market here.

Nic Waugh of Melbourne’s PLA Aviation Services, who has the exclusive licence to distribute the aircraft in Australia and New Zealand, said it looks sleek and sophisticated but what really sets it apart is its speed.

“It’s almost 30 percent faster than its closest competitors with speeds of up to 164 knots or 300km/hour. It’s the closest you’ll get to being a fighter pilot, without joining the military.” Mr Waugh said. “With the capacity to fly further than its competition the scope for the Blackshape Prime in countries like Australia and New Zealand is endless.”

The Blackshape Prime is perfect for busy executives who want to shorten their travel time and avoid chaotic domestic airports. 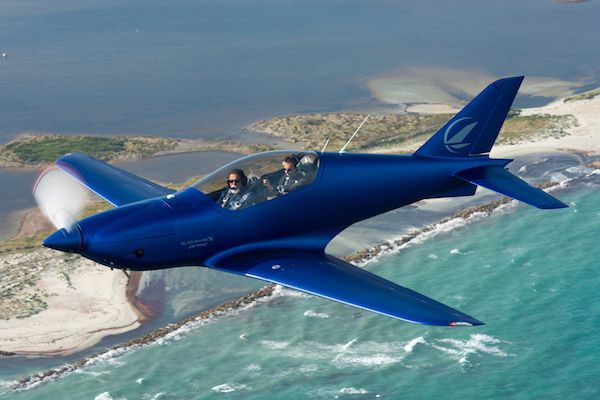 It’s narrow profile and retractable undercarriage make it even more aerodynamic. The plane has been recorded flying from Perth to Margaret River in less than an hour, from Sydney to Byron Bay in just over two hours and Adelaide to Melbourne in quarter of the time it would take by car, being able to travel up to 1100km before it needs to refuel.

“The technology too is revolutionary for a plane of this size with a carbon-fibre frame, unique retractable landing gear and internal ballistic parachute.” Mr Waugh continued.

“As well as its European styling the Blackshape company sets its self apart by its mission to create the highest quality, best performing and safest aircraft in their class.”

Pilot Ian Loveridge has been flying for 22 years with over 8500 hours of flying experience he commends the blackshape’s performance.

“From the moment it takes off, it’s so responsive; with extraordinary manoeuvrability and a climb rate of is 1150ft per min. This is a pilot’s aircraft, you’re in charge and make all of the decisions, that’s why we’re seeing a lot of interest from professional pilots who are wanting the thrill of flying on days off,” he said.

PLA can organise training with prices for the Blackshape Prime starting from $268,000 plus GST.

Blackshape Prime has been awarded best airplane of the world in the European Ultra-Light Category. All planes are designed and manufactured, in Monopoli, Italy.