Following a successful keel laying ceremony on 20 February 2019, Nobiskrug has announced that 77-metre Black Shark is taking shape and remains on track to meet its scheduled delivery in spring 2021.

Taking place at Nobiskrug’s keel laying premises in Kiel, the ceremony also served as the yard’s first event of the year. Holger Kahl, Managing Director of Nobiskrug, delivered a warm welcome speech to the guests, followed by an address by Evgeniy Kochman, Chief Executive of Imperial. Imperial acted as broker for the sale of Project Black Shark and continues as owner’s representative and construction supervisor throughout the build.

Mr. Kochman spoke of the company’s excitement to be collaborating on a second superyacht over 70 metres with the German shipyard, stating: “We are pleased to team up again with our esteemed partners at Nobiskrug. Project Black Shark is a major milestone for Imperial on several aspects: the very first Imperial vessel designed in close collaboration with Winch Design and Sinot Yacht Architecture & Design, and the very first publicized superyacht project from keel laying to delivery.

With Project Black Shark, together with Nobiskrug we want to give a clearer understanding of our industry and how exclusive creations are coming to life, who are the people behind. We will not only reveal to the world an exciting 77-metre superyacht, but a vision from the inside like it was never done before!” 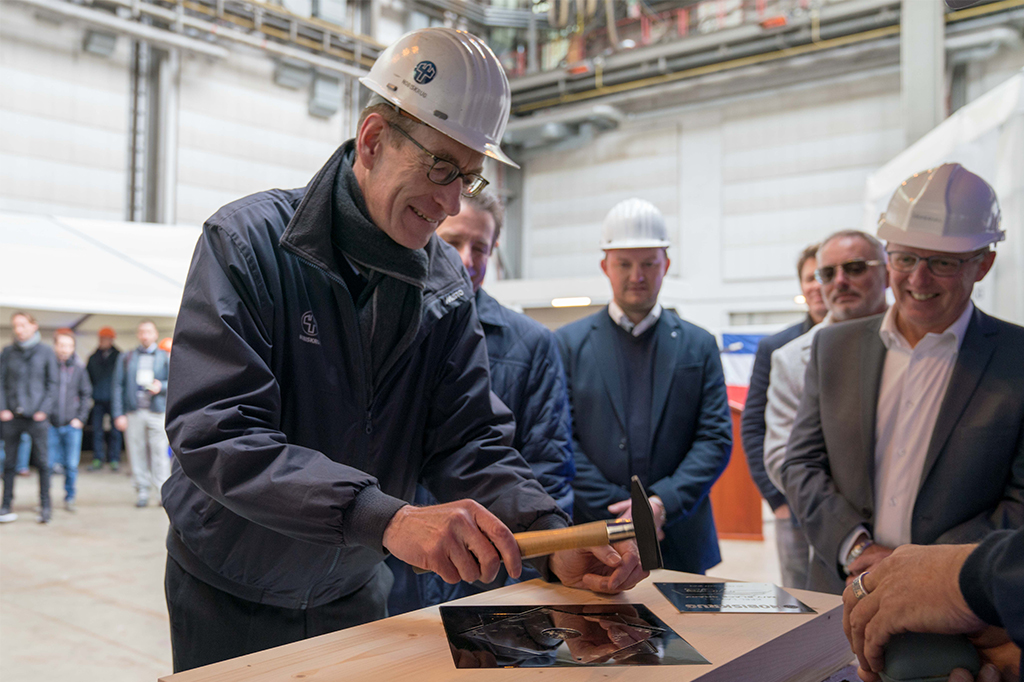 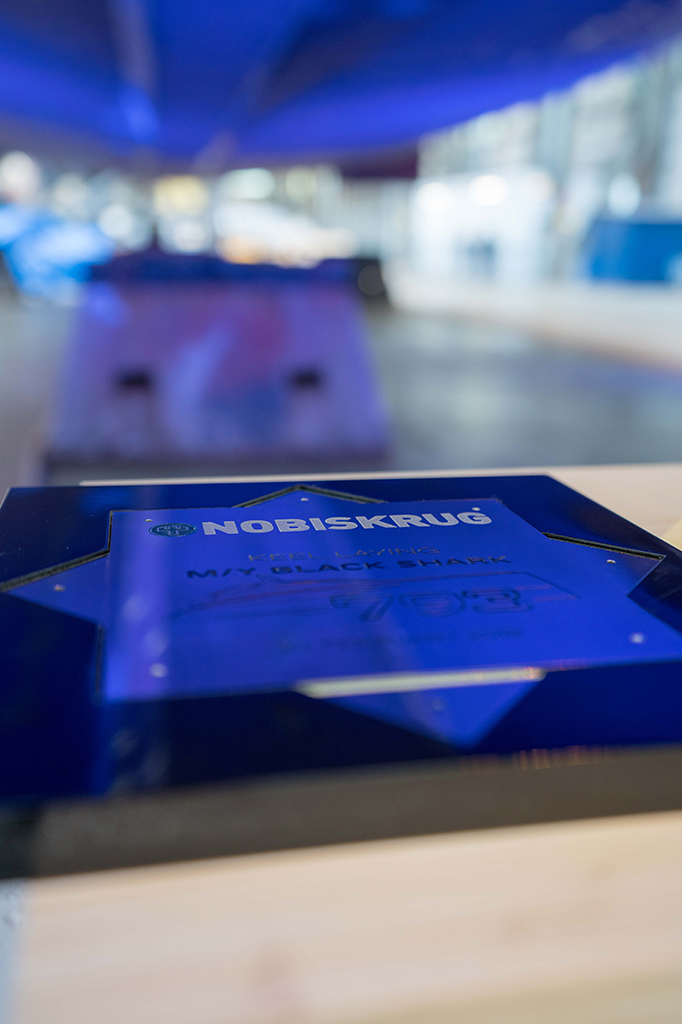 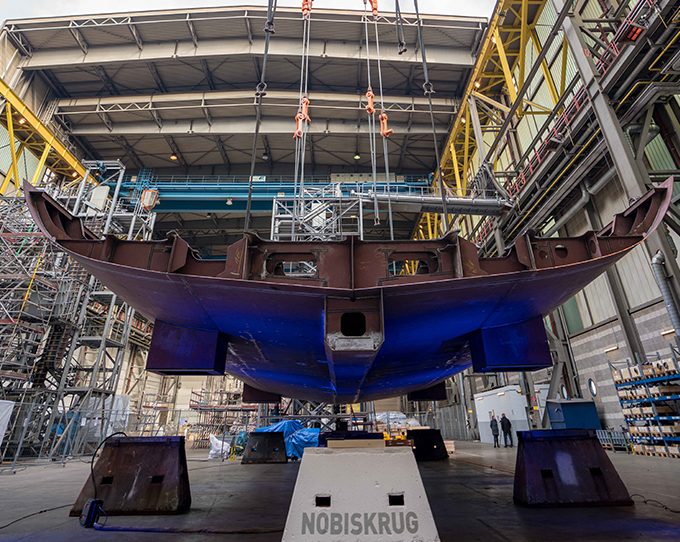 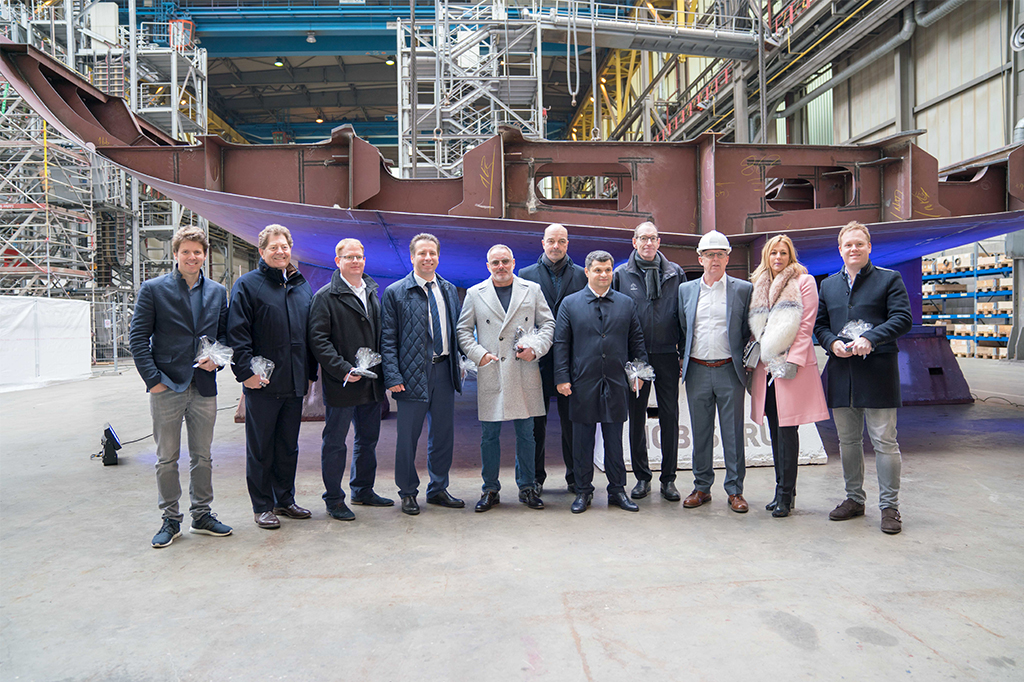 The keel laying ceremony always marks an important milestone within a yacht’s build history. In addition to the actual placing and securing of the keel laying section itself, the ceremony also features the traditional coin insertion, which sees the yacht owner place a special coin under the keel. As well as being a symbolic start to the hull assembly, it is also a mark of good luck for when sailing the oceans, and is therefore retrieved and returned to the owner once the yacht is near to completion.  It also determines the accomplished state of applicable regulations for the vessel.

She has a distinctive reverse bow, and will feature two luxury tenders, a spacious on-deck whirlpool, three decks of imposing interior and a grand beach club and spa area. Perhaps more notably, however, she is being built under the new IMO Tier 3 regulations and Red Ensign Group Yacht Code Part A.

“With two remarkable teams of designers and an experienced superyacht management company, we are truly excited to realise this bespoke project,” says Holger Kahl.

“With that in mind, we have decided to open our doors and give exclusive behind-the-scenes access. The build process is often cloaked in darkness and secrecy, so on this occasion, we are enormously happy to be able to share our innovations and processes.”

Gathering of the minds

Gathering of the minds