It was show time in Sydney again with superyachts to tinnies on offer, all hosted at Cockle Bay and in the brand new Convention Centre with its ponds to try before-you-buy.

Life may truly begin at 50 with this varied display at the newly opened International Convention Centre, thanks to a more enlivened and interactive show.

Ranging from amphibious day boats (the French Iguana) to modest tinnie/outboard packages; and beyond to the largesse of the Ghost II superyacht, Sydney put on a fancy show for its 50th birthday.

The 63,000 or so visitors enjoyed the spacious new halls, multiple cafes and new elevated decks, while exhibitors spread themselves out across two floors and to top it all, the sun shone for all five days. 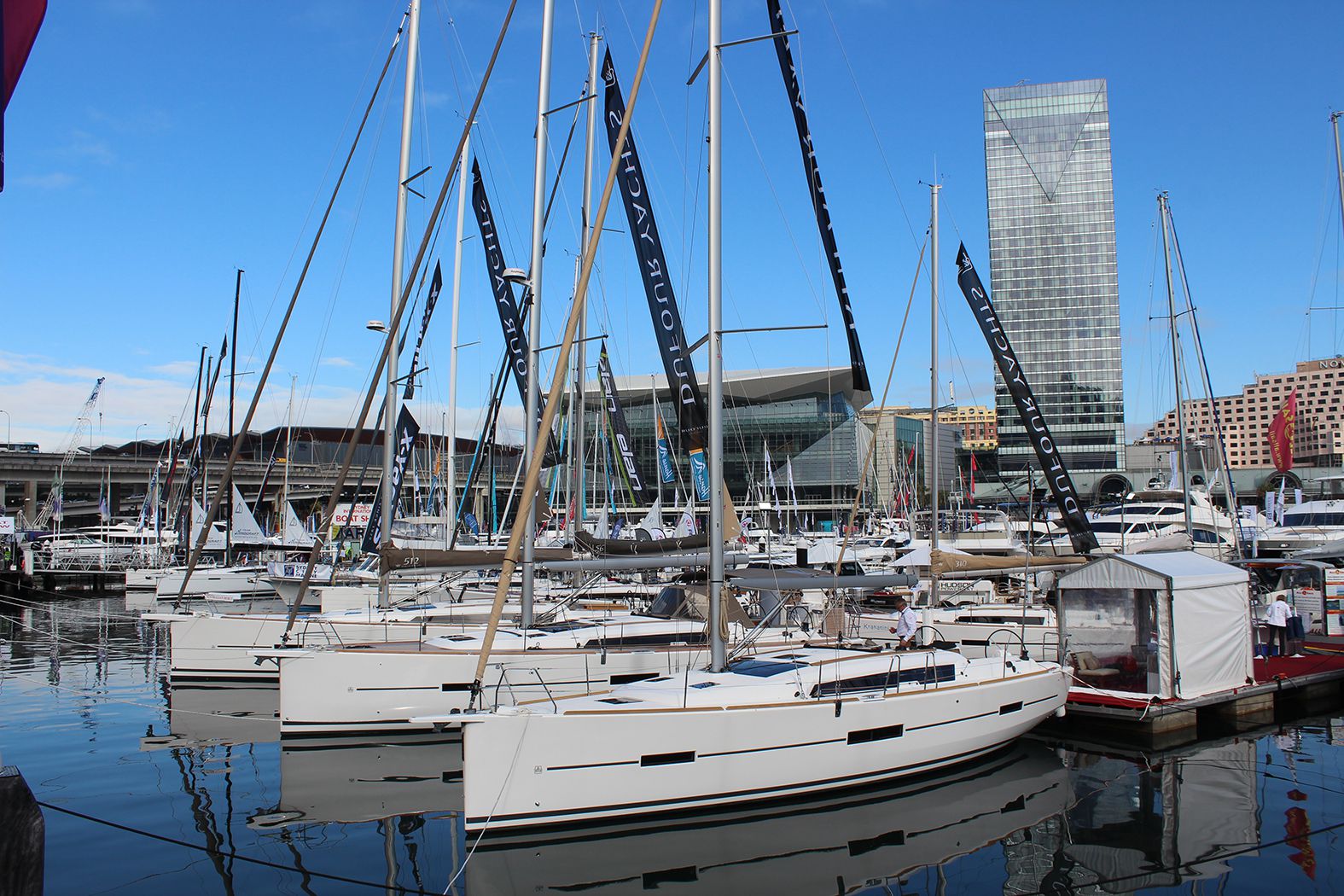 Reflecting the fastest growing sector, multihulls were in profusion with all the top brands, Lagoon, Leopard, Seawind and Fountaine Pajot showing new models. Power catamarans are a major force within this sector so the Fountaine Pajot MY44 on its Australian debut got a lot of attention.

This flybridge powercat may well be available for charter soon, with the yard’s new majority shareholding in Dream Yacht Charter. This global powerhouse for chartering has been a major buyer of rival Catana and the Bali catamarans, so interesting times ahead. Chinese brand Aquila looks to be a new rival to the big French and South African brands with its well crafted boats, including the innovative Aquila 36; an open-plan dayboat with commercial and owner specific varieties. Also from China, Hudson Yachts debuted its impressive HH48 powercat.

Sporting stylish Bill Dixon lines with input from Californian cat gurus Morelli&Melvin, this flybridge cruiser featured an unusual deck-level owner’s suite. I enjoyed the walk-through while talking with yard manager Paul Hakes, an experienced Kiwi builder-designer who gave me a good insight into the new boat.

The traditional monohull cruising yacht was well represented and for the entry-level sailor the Jeanneau 349 was a stand-out. “Best boat they’ve made in a while and we’ve sold 34 into Australia so far,” said distributor Lee Condell from Performance Boating as we stood on the pontoon for the launch of another Jeanneau, the 51.

The Jeanneau 51 had impressed me when I’d sailed the first hull recently in France and its arrival in Australia was marked by a ‘sold’ sign on it. Fully automated sail handling, including in-mast furling on my review boat means that 51 feet is not beyond a couple taking one cruising.

Rival French builder Dufour’s large flotilla offered something for everyone, ranging from the entry-level 310 to the 56 making its Australian debut; all sporting sharp Felci Italian styling. Another good starter yacht debuting was the Hanse 315; with modest proportions yet it includes two cabins and tiller steering. Elsewhere, the distant sight of a large Italian flag fluttering in the light breeze brought me to the Italia IY 13.98, the first of these stylish performance-cruisers to reach Australia. I plan to put this one through its paces at Hamilton Island Race Week with dealer Ensign Brokers, so I will let you know how it goes. 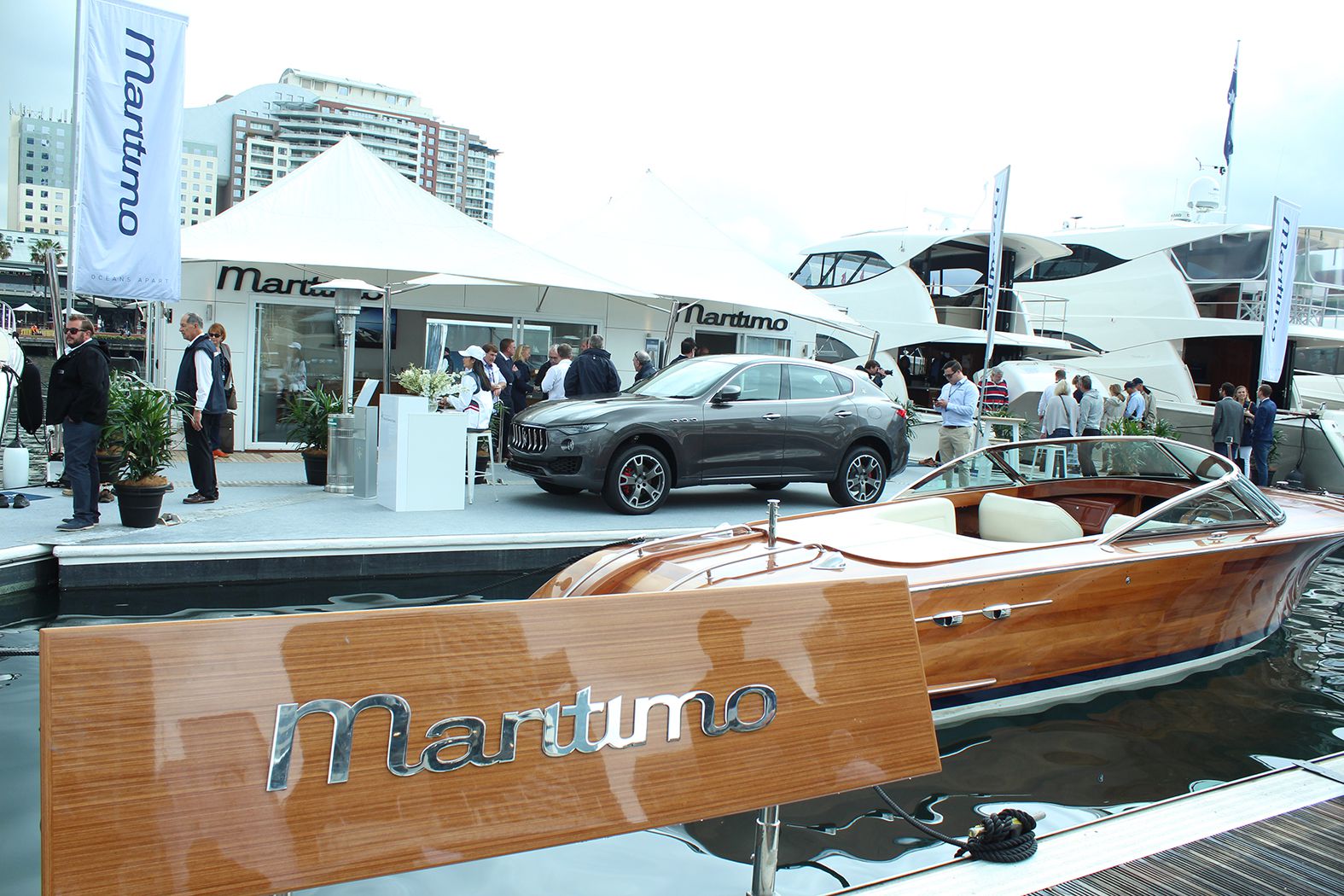 Maritimo launched the S70 and revealed details of its new X range. 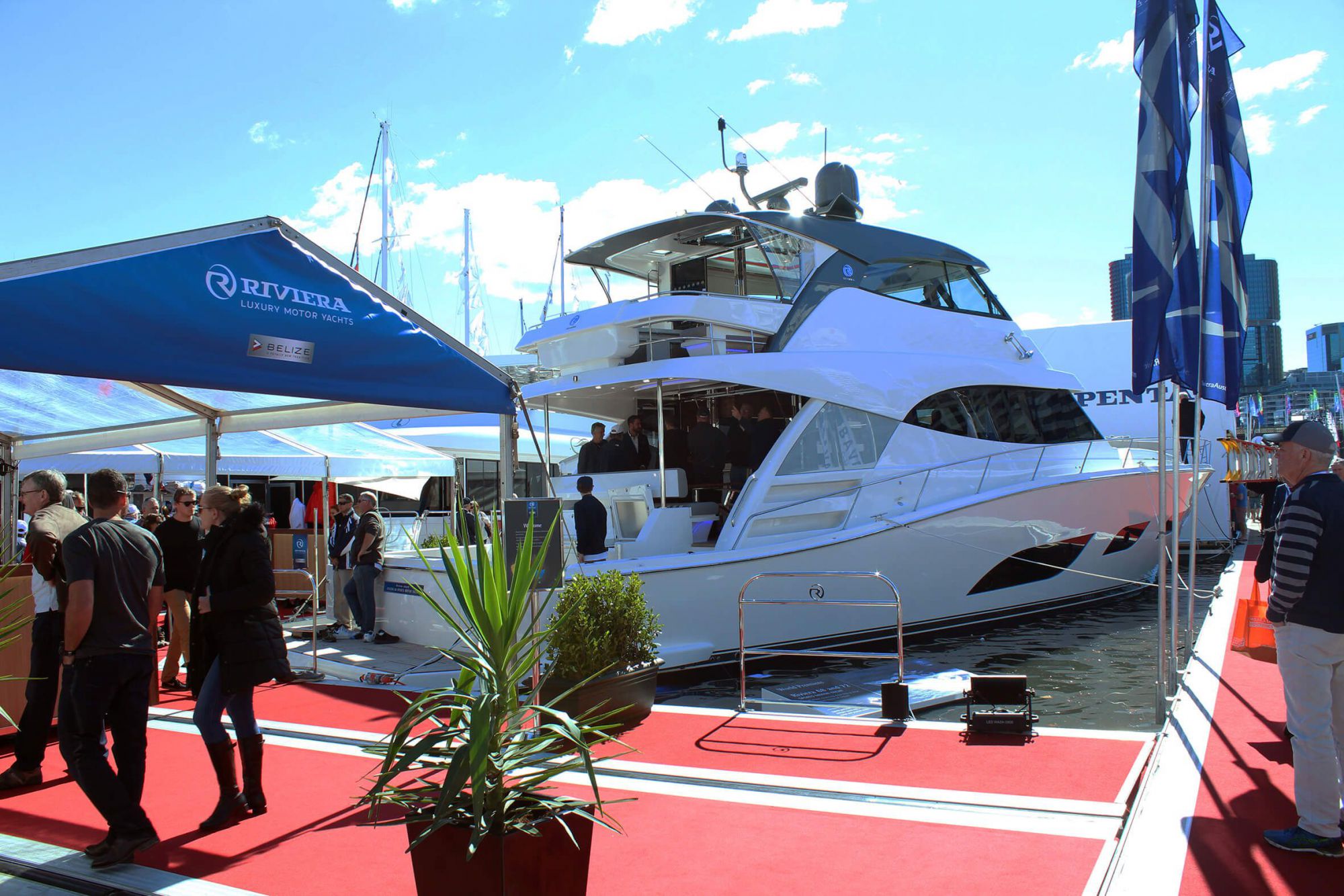 The Iguana Classic 31 on show through SACS Marine.

Mid range powerboats are generating large revenues for the mass production builders such as the Beneteau Group whose dedicated brands of Monte Carlo and Prestige were at Sydney. The Prestige N500 flybridge was on display and also on the way are several updated models including the three cabin Prestige 630 Sports Fly which I enjoyed testing in France (with highly manoeuvrable Volvo IPS 950 pod drives). The Monte Carlo 6 also debuted at Sydney, two years after its launch in Europe and making a major statement in style; thanks to its tall superstructure being disguised with swept-back bulwarks and clever colour coding. I’d recently sea trialled the 6S, the sport version with small flybridge which used Cummins engines and Zeus gearboxes, which proved easy to handle in the tight confines of a Spanish marina, despite its 60 foot length; especially when the Skyhook GPS positioning was engaged. German rivals Bavaria had show of strength as well with the arrival of the voluminous petrol Mercruiser powered S40 with island double bed forward and the. Also on display was the ambitious new R40 flybridge that uses twin stern drive 370-HP Volvo Penta D6 diesels with counter rotating propellers pushing it to a speedy 36 knots.

The most striking examples of boating, naturally, are the glamour yachts which thousands of passers by at Darling Harbour stopped to ogle at. The leader of the pack this year was the magnificent Ghost II, launched in July for the Australian charter market. The 122 foot Majesty superyacht, designed by Gulf Craft, dwarfed the first Fleming 58 to arrive in Australia. However this modest 58 foot bluewater motor cruiser is ideal for a retired couple who want a long-range boat to reach the Pacific Islands.

More ostentatious and a great example of Australian workmanship, was the new Riviera 68 nearby. At it’s official launch I chatted to company owner Rodney Longhurst, who had voyaged to Sydney on it with his young family, as we looked through the flybridge deck. He explained how Riviera has reverted to traditional shaft drive (rather than pod drives) for this 68. Looking over the 1,550 HP Man diesels and Twindisc gearbox, I also noted the space for retro fitting a Seakeeper stabilizer; a growing trend in larger motor cruisers.

Not to be outdone, rival Maritimo were showing their custom built S70 sedan, a new variation on their proven flybridge model. Specially built for its New Zealand owners, twin Scania D16 -1,150HP motors can push the 48 ton hull to nearly 30 knots. Again, reflecting another growing trend – ageing owners choosing single-decks – the Australian company see good opportunities for this model. It has a range of 520 nautical miles at 21 knots and an impressive 1,600 nautical miles at nine knots.

Sales and Marketing Manager, Greg Haines, said the vessel had been highly customised by its owner and features satin dark teak timbers throughout the four cabins including the full beam master cabin. Notable features included Seakeeper stabilizer and ZF joystick with I-Anchor technology. On deck there’s an extra large sunroof and a hydraulic swim platform for tender storage. 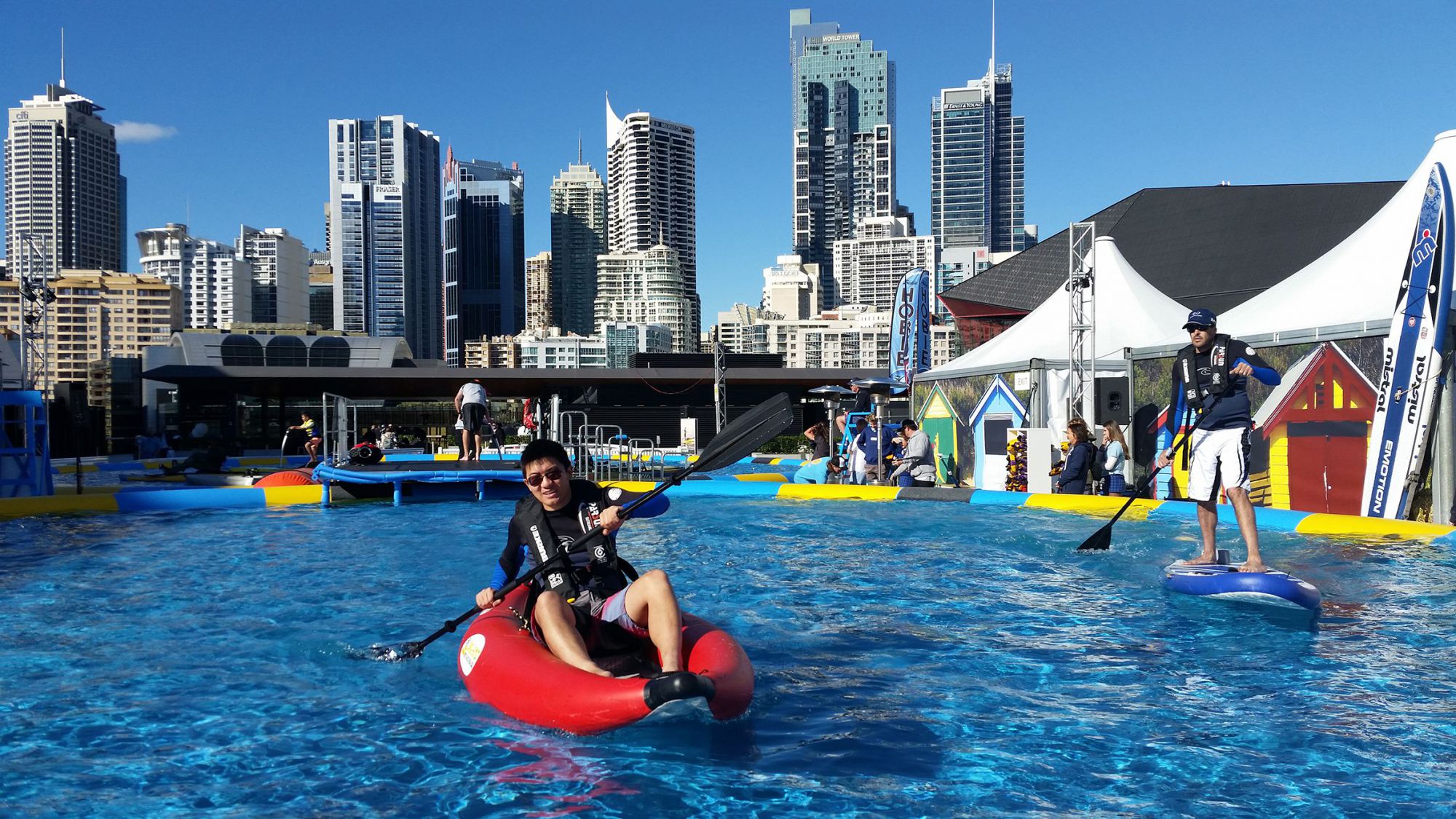 Sub-aqua diving exhibitors joined the show for the first time. But there was much more to see than mere dive valves and fins. Tourist agencies from Indonesia, New Guinea, the Maldives and others were also there to give destination advice. In Europe diving is one of the fastest growing sports, with major displays at the world’s leading show, the Dusseldorf Boat Show, so Sydney is very much on-message with this wise decision to include the sport. Also, at last children are being catered for, thanks to the new sun deck and the three temporary pools. Here, I watched as the little ones bobbed around on pedal cars in the shallow pool. Alongside in the bigger one, adults tried to other new craze, paddleboards.

The latest Hobie stand-up pedal board was there, the Mirage Eclipse; an interesting combination that gives more stability to the user than a standard paddle board. Nearby, inside the hall were the hard-core fun craft: fleets of jet skis and some in rescue trim, reflecting their increasing use in surf life-saving.

A worthy idea is the My First Boat, a new BIA initiative that was given space where dinghies, tinnies, kayaks and other water craft were open for inspection and experts were on-hand for advice. Given our ageing user base in boating, this is to be commended but requires more resources to turn the tide of falling user numbers across boating. 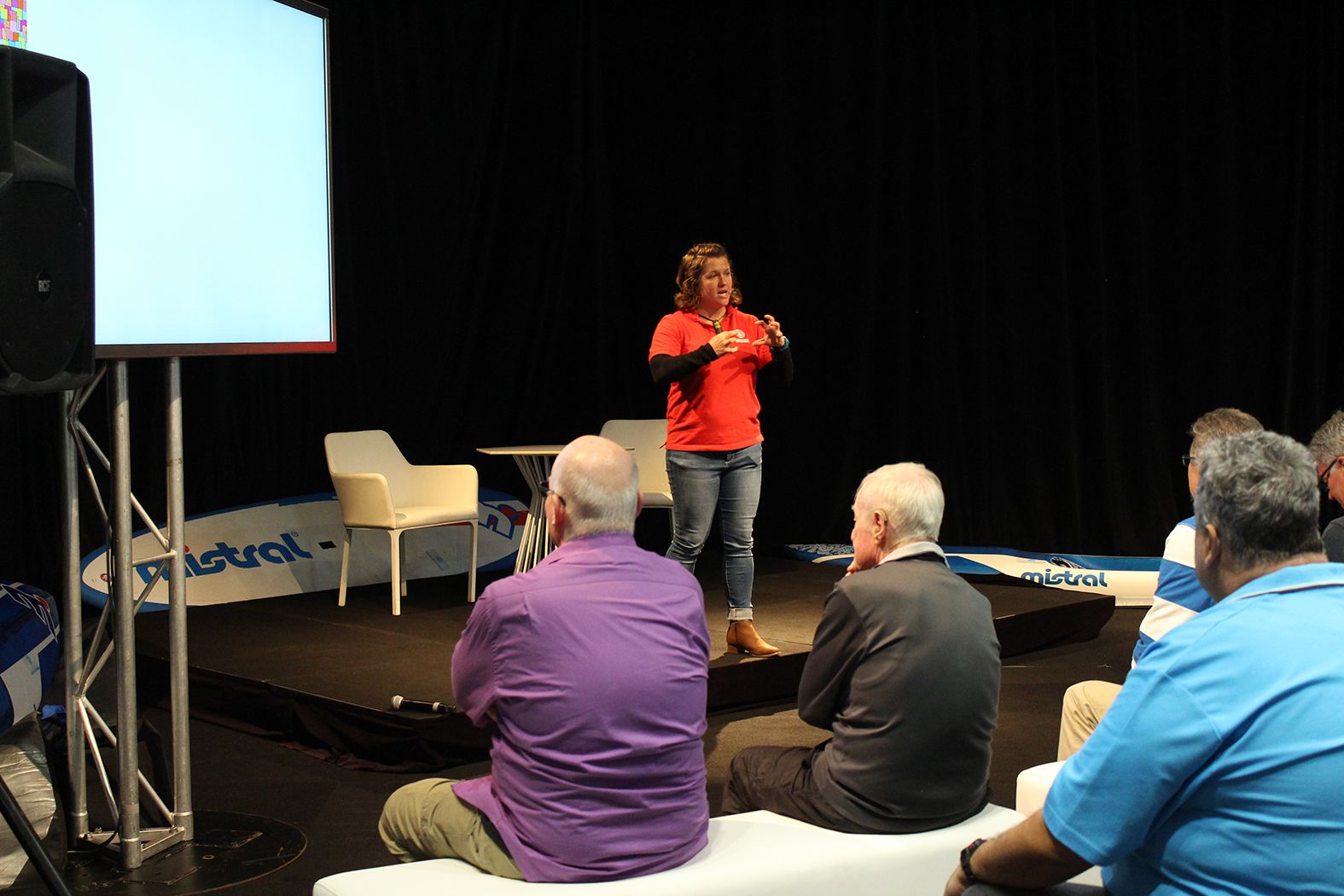 Presentations in the new convention centre hall were varied, ranging from marine ecology to daring adventurers. I enjoyed hearing about the life cycle of the dolphin and its struggle against falling food supplies while being inspired by Lisa Blair’s successful circumnavigation of Antarctica.

“When my mast came down there was this huge sound like a train coming,” the 32 year-old told a rapt audience of young and old. Finding herself dismasted in the Southern Ocean, 700 miles from land, Blair explained how she unbolted the broken rig then made a smaller one out of the boom. The most dramatic part was retrieving fuel from a nearby ship, she said, which smashed the topside of her 50 foot boat.

What followed was a long motor-sail into Cape Town for a new mast, before successfully reaching Australia in late July to complete her eventful 16,000 mile voyage. Similarly impressive was lone rower Michelle Lee.

Michelle came to the show with her newly built boat that she hopes to row across the Atlantic, taking about 80 days – in the easterly running trade wind belt from the Canary Islands to the Caribbean; a timely reminder that boats and adventurers came in all shapes and sizes at the 50th Sydney International Boat Show.

Welcome to the Ocean Club

Welcome to the Ocean Club