Tankoa has unveiled its new Linea Sportiva by Luca Dini, designed to expand the brand’s offering and its appeal to a wider market.

The Genoa-based boutique brand Tankoa has revealed the first model in the Linea Sportiva series, the Sportiva 55 rated at under 500 gt, which falls between a larger and smaller version.

“At Tankoa, we always try and think of new products that can meet the ever-changing needs of customers in our market segment,” says Tankoa CEO, Vincenzo Poerio.

“With this in mind, we met various designers to exchange ideas and views on new products. With Luca Dini we found an immediate harmony of ideas that became concrete a few months later with the first concept of the Sportiva 55. It was love at first sight!”

“The sleek, thoroughbred exterior lines of the 55-metre Sportiva express the yacht’s sporty nature reflected in the tails of the upper deck overhangs and the automotive-inspired bow section,” says Luca Dini.

“The style is rigorous yet timeless and deliberately contrasts with a layout designed for informal contemporary living.” 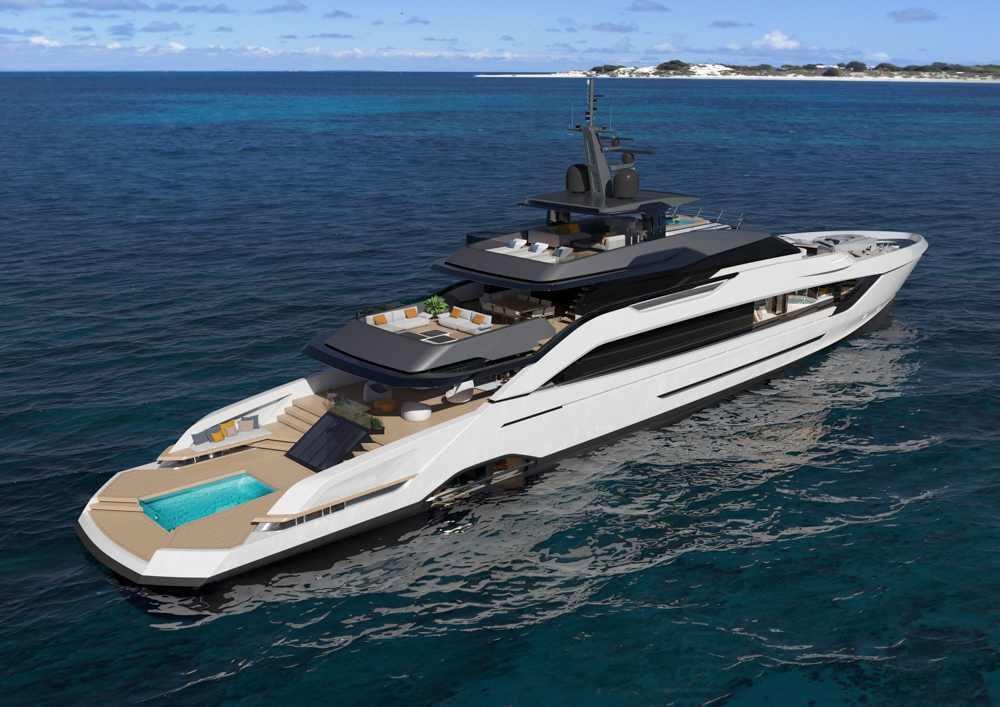 The new Sportiva 55 is placed between a larger and a smaller model. 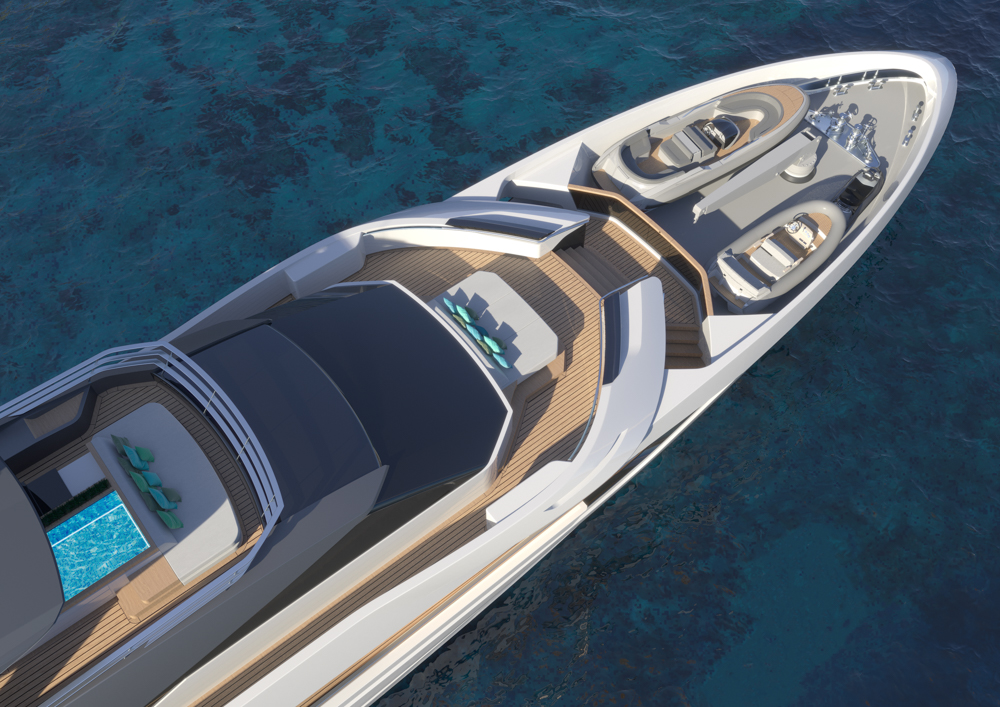 Plenty of deck space for leisure and socialising. 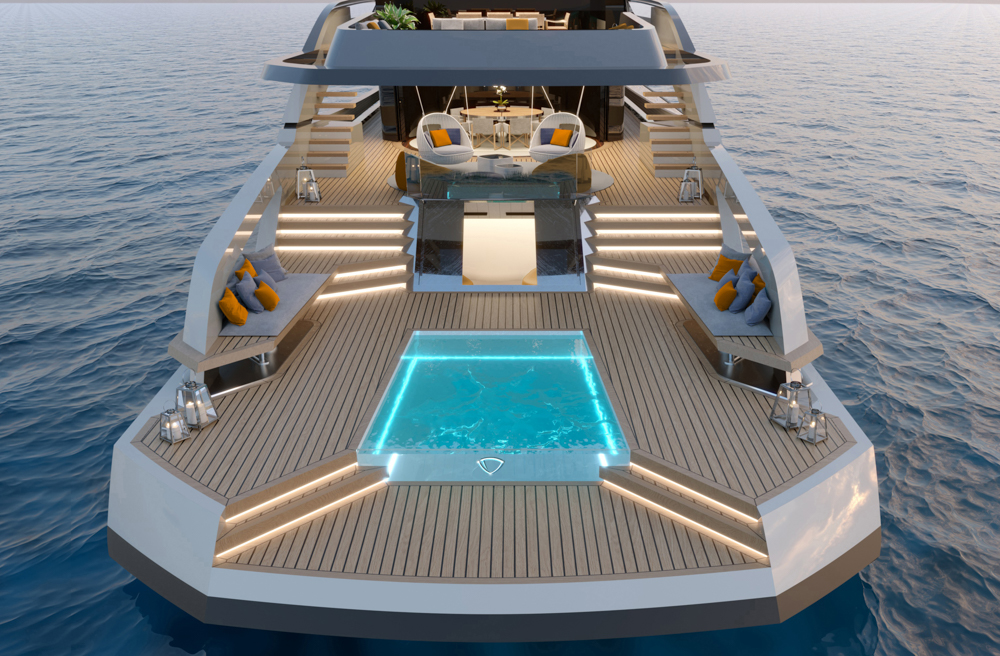 The beach club space is impressive. 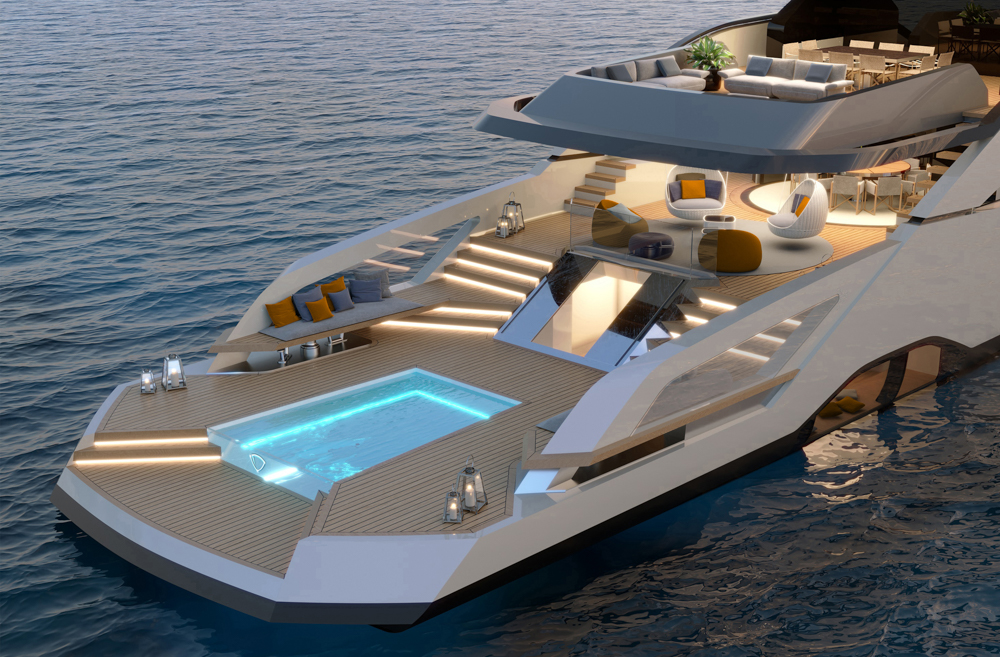 The beach club is more like a main deck cockpit and comprises a pool and access to the spa zone, gym and sauna.

Considerable real estate is devoted to the beach club, which is actually more of a main deck cockpit and comprises a swimming pool sunk into the terraced aft deck with access to a spa zone on the lower deck complete with gym and sauna, as well as a side-loading garage for water toys.

A novel highlight of the whole area is a large hull window that is partially underwater, which can be enjoyed either under way or at anchor.

The main deck layout is asymmetrical with a circular dining area connecting the open aft deck and main saloon, but where the master stateroom begins it is full-beam to port with a walkway to starboard with a built-in chaise lounge and jacuzzi as well as a private sauna.

Unusually, there is also a central staircase leading from the owner’s personal foredeck to the forward bridge deck, which is designed to be used as an open-air cinema when at anchor.

A 7-metre tender, crew tender and Sea-Doo are stowed on the open foredeck but are hidden from view by the bulwarks. This Suite on the Sea concept offers an innovative yet flexible layout solution that also helps to keep the gross tonnage at below 500 gt.

The bridge deck has a sky lounge, an extendable table for alfresco dining and lounging space on the aft deck. The sun deck is partially shaded by the hard top and features a wet bar by the forward hot tub and plenty of sun lounging space. 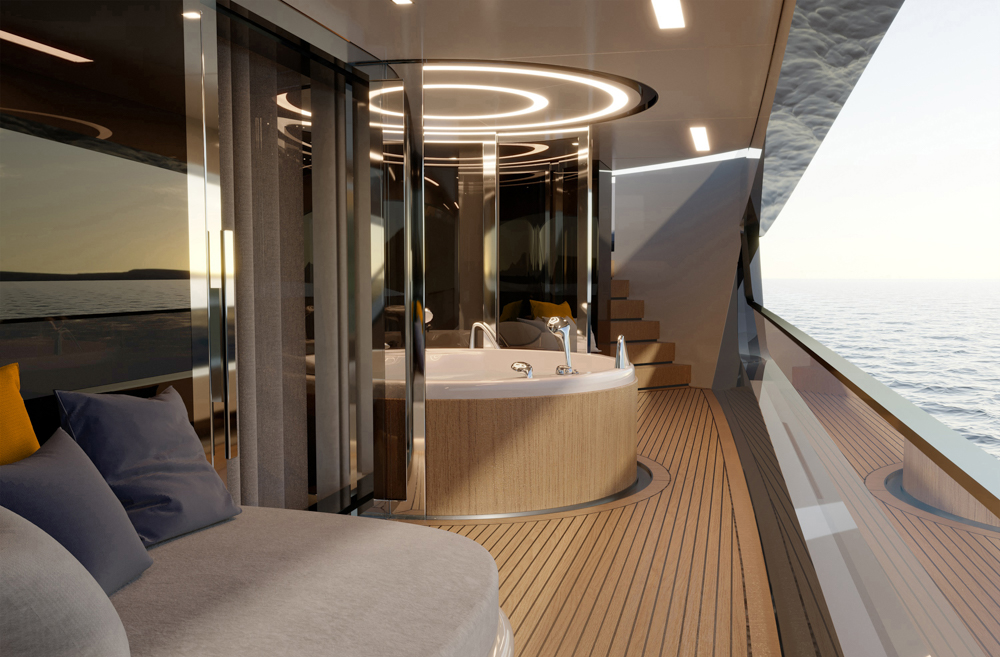 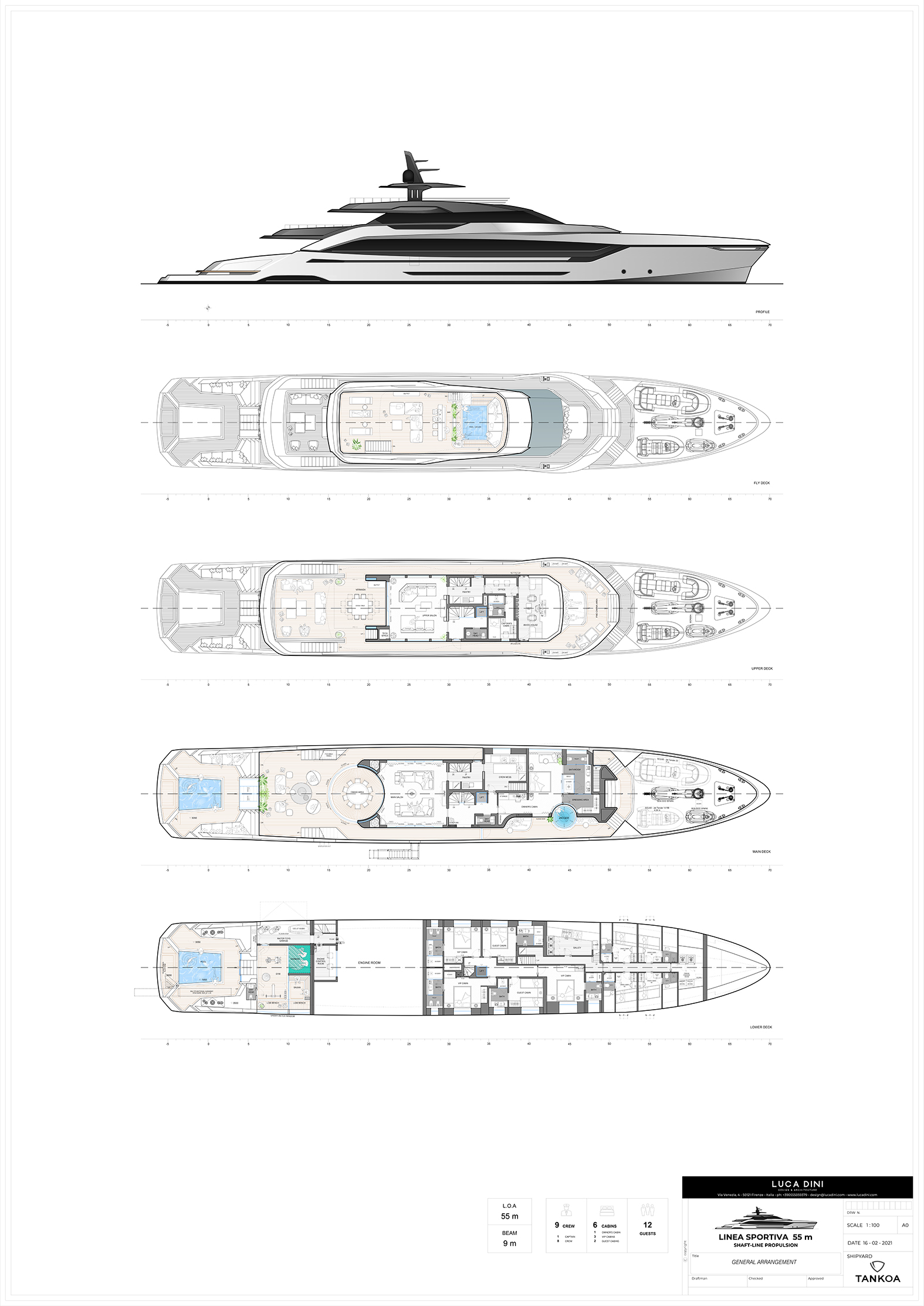 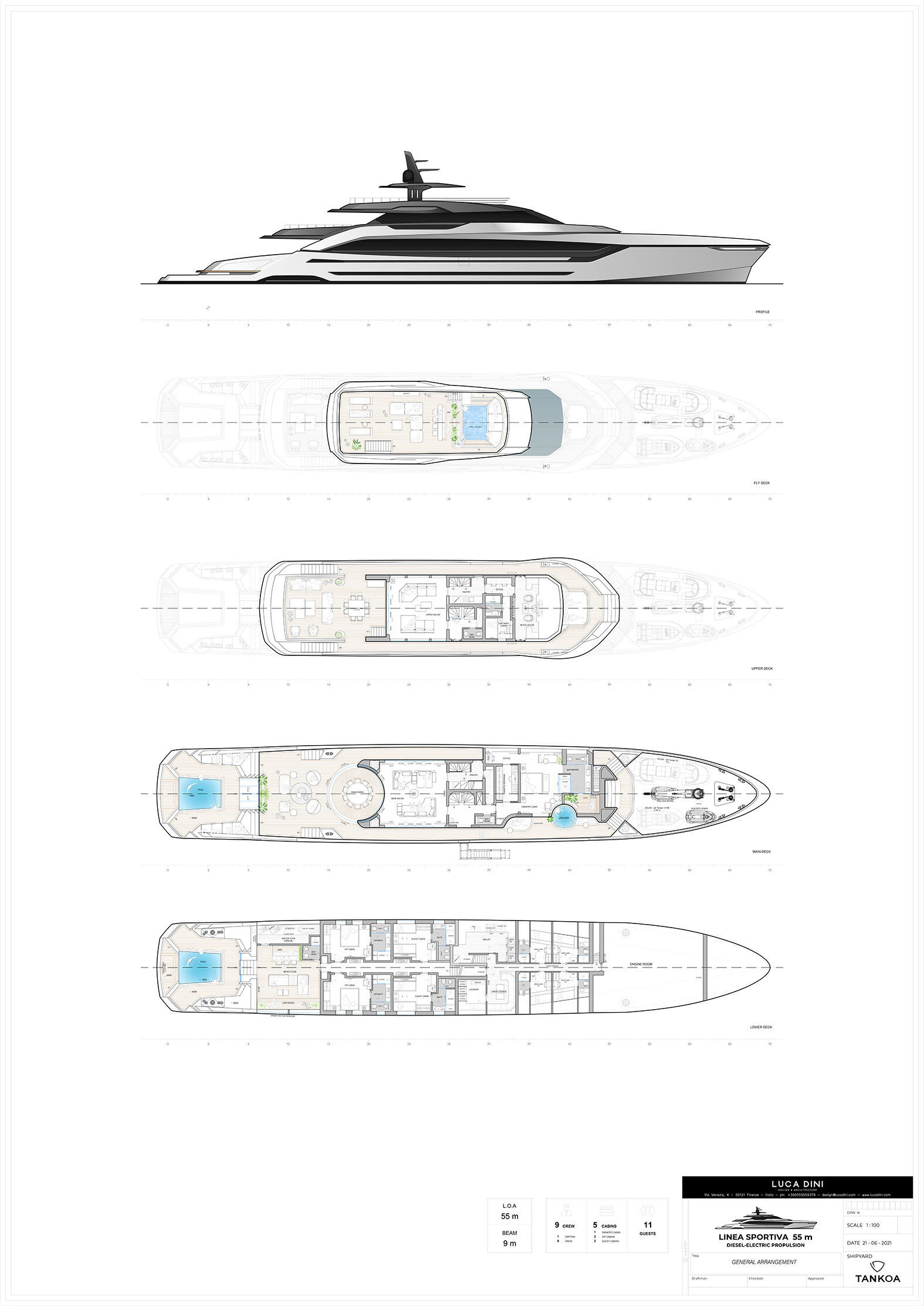 With a steel hull and aluminium superstructure, the Sportiva 55 has a top speed of 16.5 knots and a cruising speed of 15 knots. Her range at an economic speed of 12 knots is 3,800 nautical miles.

“The Sportiva 55 can also be fitted with hybrid propulsion and, in this case, the engine room can be moved forward so the four guest cabins on the lower deck have direct access to the spa and beach club. Fantastic!” adds Poerio.

Although the 55 is closest to the needs of Tankoa’s current client base, the shipyard also asked Luca Dini to retain the same family feeling in a fast, 45-metre all-aluminium version and scale it up to a larger and more comfortable 65-metre proposal.