The 29th Sanctuary Cove International Boat Show has been stamped with the ultimate seal of approval from exhibitors and visitors, with immense satisfaction, record-breaking sales and excellent visitor feedback from what has been hailed ‘the best show in 10 years’.

Headlining the slew of sales over the massive four-day event was the resident Sanctuary Cove dealership, Horizon Motor Yachts Australia (HMYA), celebrating the sale of the Horizon RP115 – a 122-foot (37m) one-of-a-kind motor yacht which will be the largest and highly optioned Horizon Yacht to arrive on Australian shores, scheduled for delivery in early 2019.

Seasoned sales professional, Mark Western has been with Horizon for 12 years, the past six in Perth.

He and director, Gary Wahlstedt toasted the deal and declared it a testament to Mark’s knowledge of the Horizon range and his relationship with Horizon clients.

“It was an awesome Show – the quality of enquiry was incredible,” said Erica Rae, marketing manager at HMYA. The marina was buzzing over the four days. 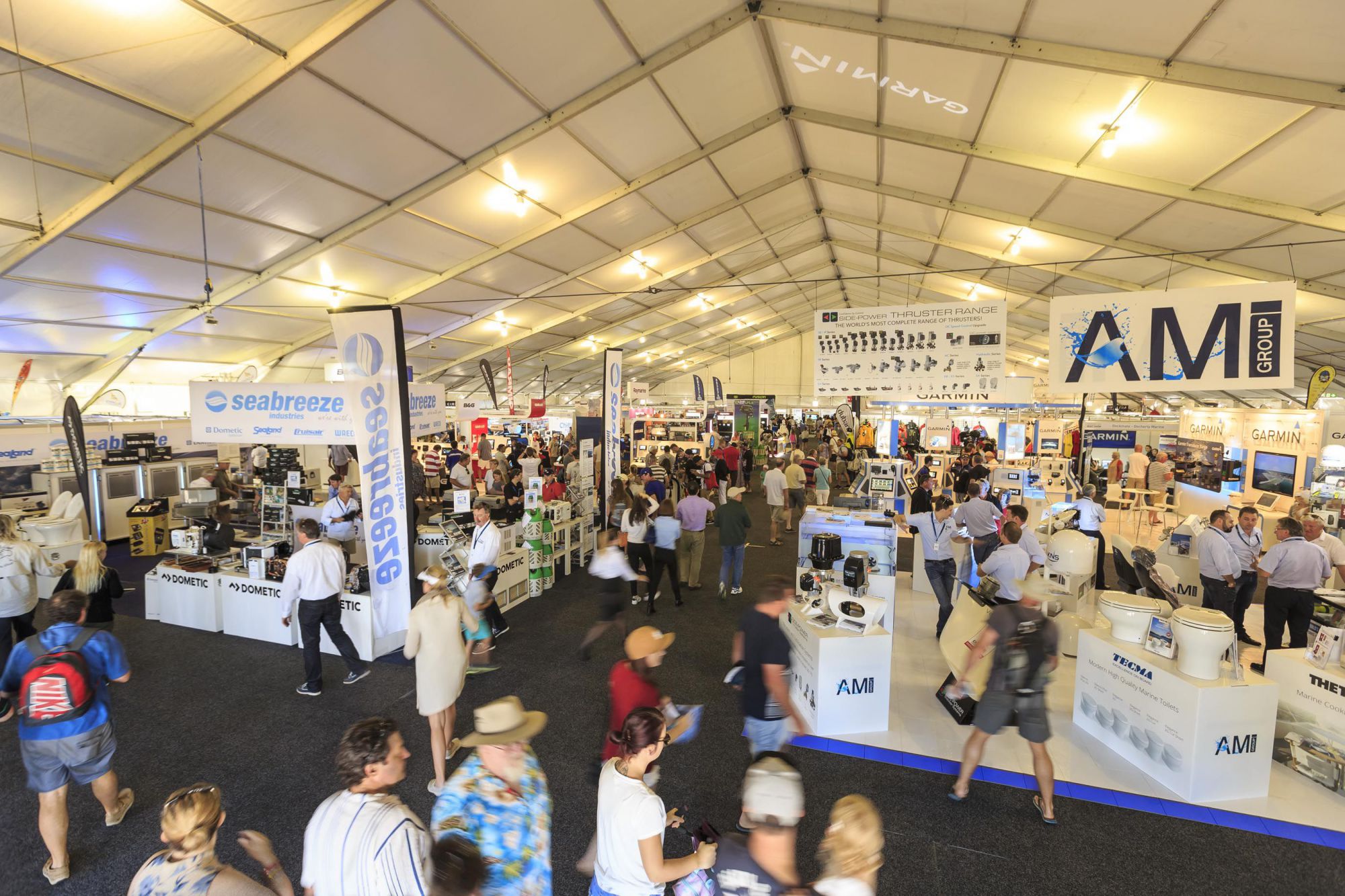 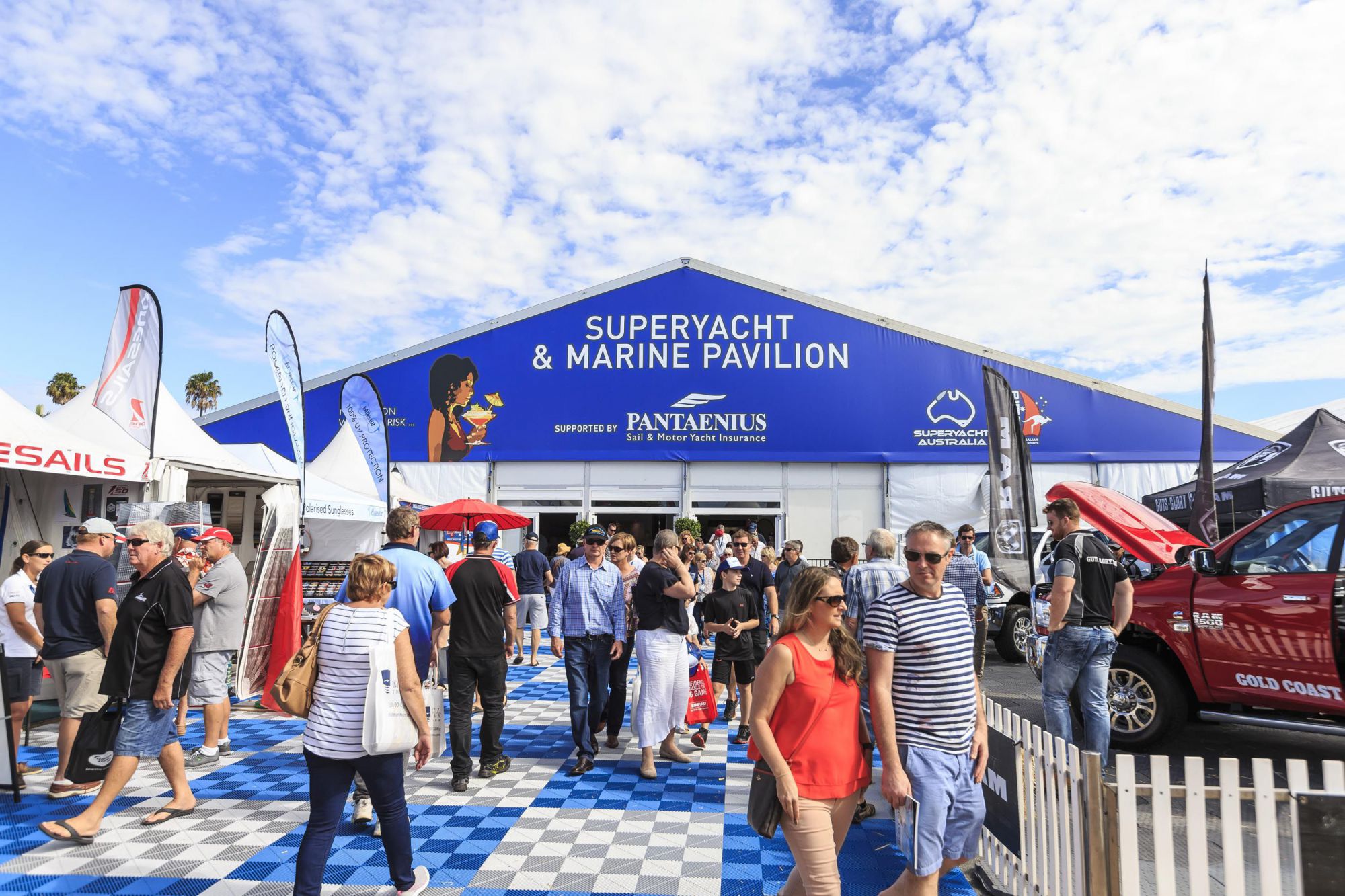 The Superyacht Pavilion housed the best in Australian and international ingenuity. 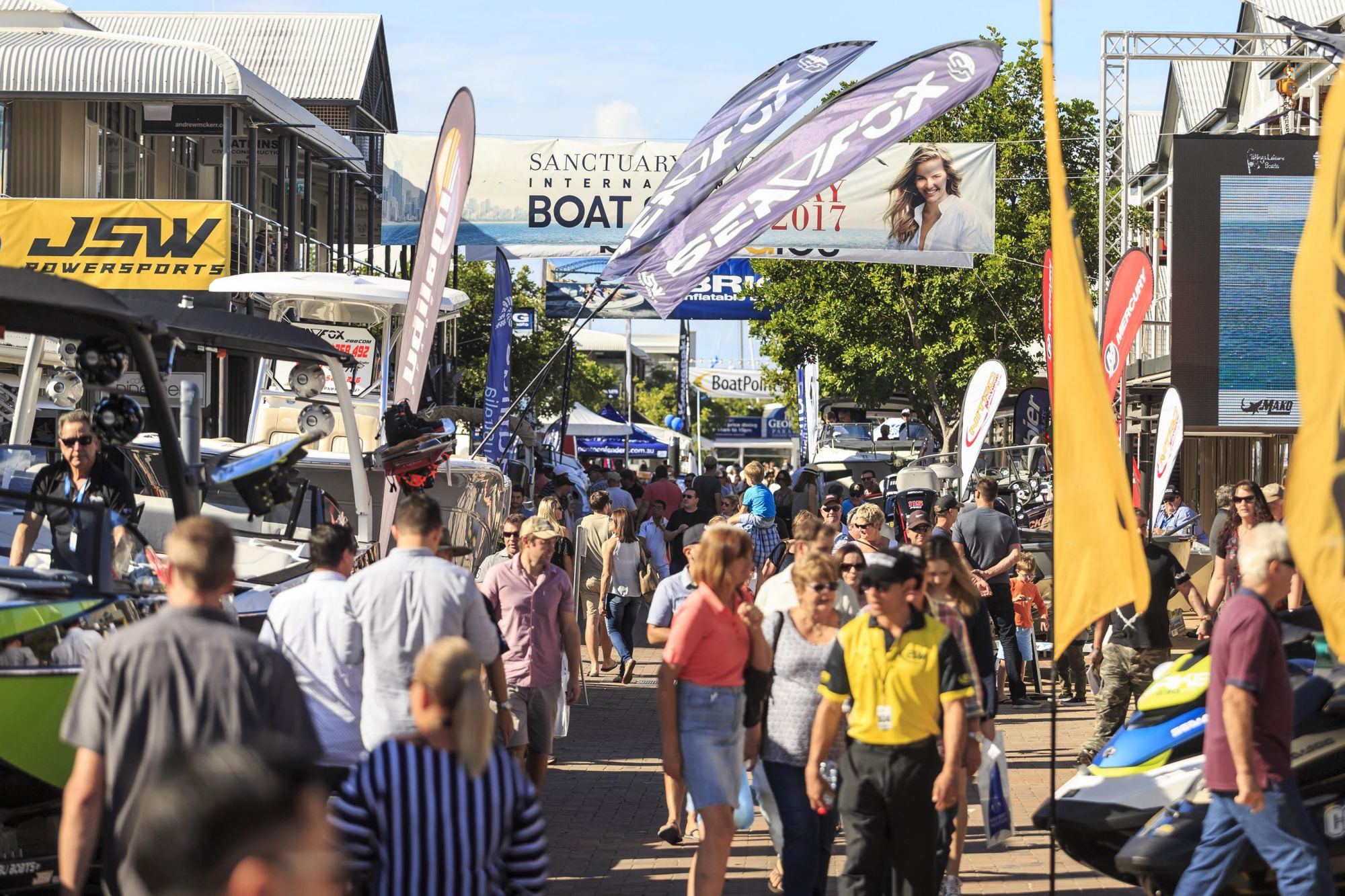 “We had seven boats on water and were busy the four days of the Show. We have a heap of enquiry on the E84 and the E56XO Sport Yacht, the Australian-specific model. We are confident we will sell a couple of boats in the next few weeks. Things are really looking up.”

Greg Haines, international sales and marketing manager at Maritimo said this year’s Show had proven to be the best SCIBS since the GFC.

“We are really, really happy,” he said. “It has been non-stop, unbelievable. The feedback from the new models, the M59 and S59 has been entirely positive and we are very happy with sales and leads.”

John Cowpe at The Multihull Group was extremely satisfied to report sales of a new Lagoon 40, Lagoon 50 and a Lagoon 42, adding that the Group were also likely to sell two of the brand new Lagoon 630 MY models.

“It has been thrilling!” he said. “We have loved SCIBS this year – great weather, great people, excellent organisation. It’s the premier boat show in Queensland with international appeal. People travel from around Australia and the region to see the latest on show at SCIBS,” he said.

“The feedback from visitors is that everybody is happy. There was a good spread of boats, something for everybody. What has been interesting for me, was meeting powerboat owners from different brands, now gravitating towards the 630MY. We have really put the cat among the pigeons with this model.”

From Multihull Central, Brent Vaughan said the team was pleased with the calibre of visitors, substantial leads and several sales from this year’s Show.

“We’ve had a cracking show – four boats sold including 2 Seawind 1160 Lites and an Aquila 44 Powercat, plus an Outremer 51. That’s a total of $4 million this Boat Show, which is a record for us. It’s been fantastic!” Mr Vaughan said.

Noting the trend towards charter, Mr Vaughan reported that the Aquila 44 and one of the Seawind 1160 are destined for charter in the Whitsundays.

“The charter market is booming,” he said. “There’s dearth of charter vessels in North Queensland. Many boats have no vacancies year-round and these boats will make great additions to the fleet.”

Mr Vaughan said their success this year at SCIBS has a lot to do with strong product and marketing to support their Boat Show presence.

“Our products are really good, and with premium packages, present so well. It’s the second SCIBS for Aquila so people know it and they’re better informed and ready to buy. It’s really taking off for us and represents the future and for us, reflective of the industry trend towards power cats.” 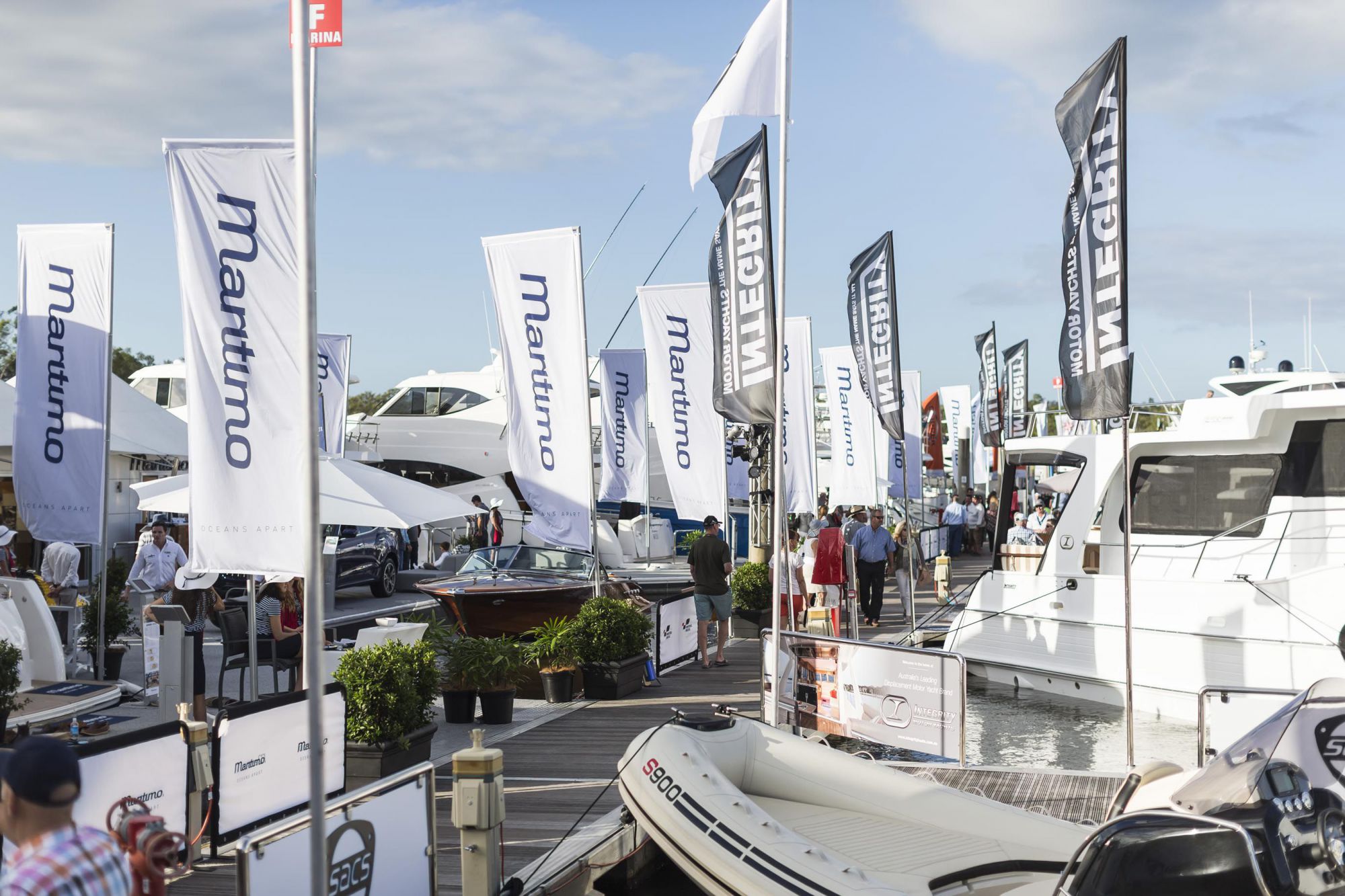 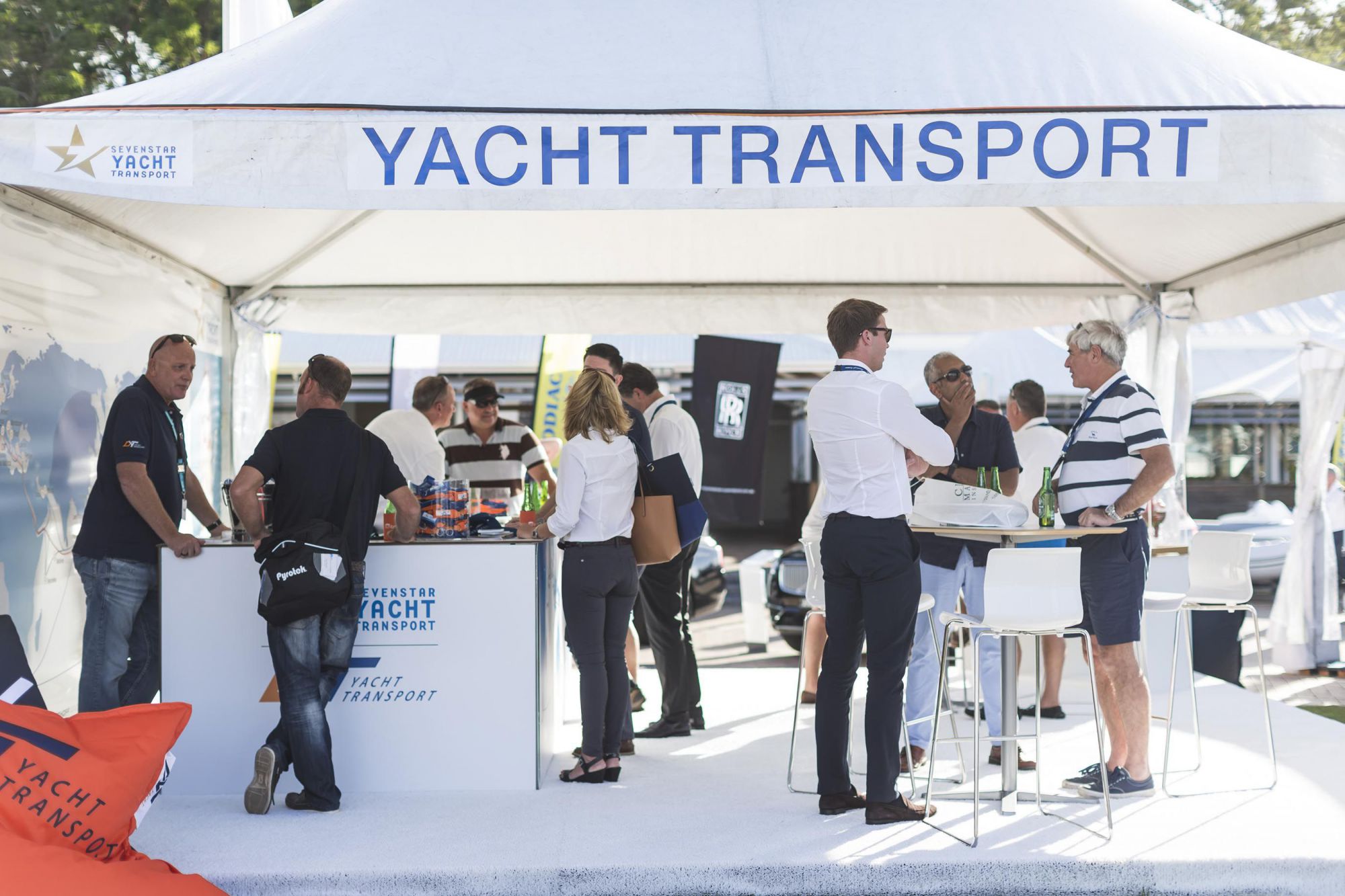 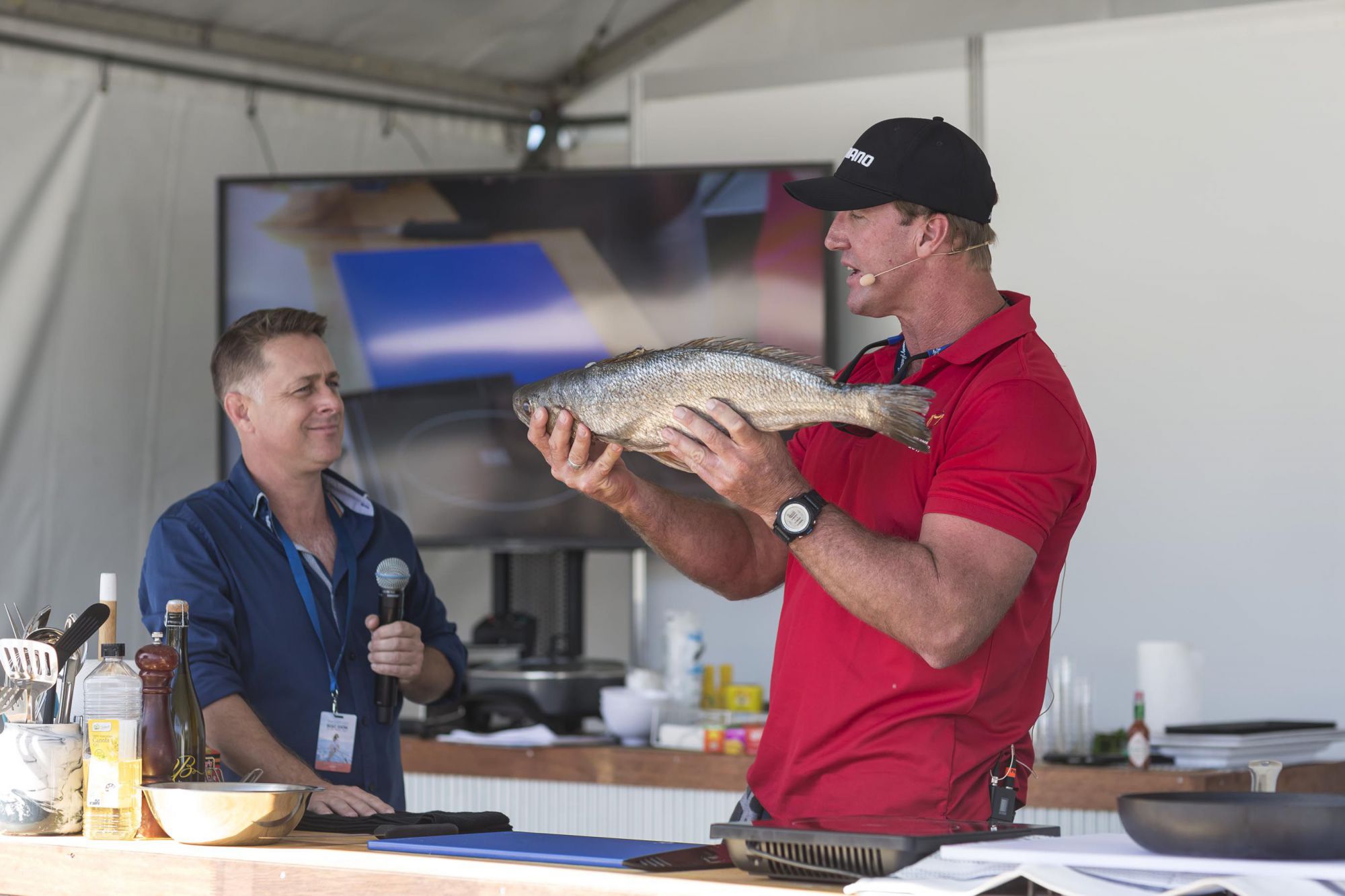 Paul Burt demonstrates how to prepare and cook your fish. 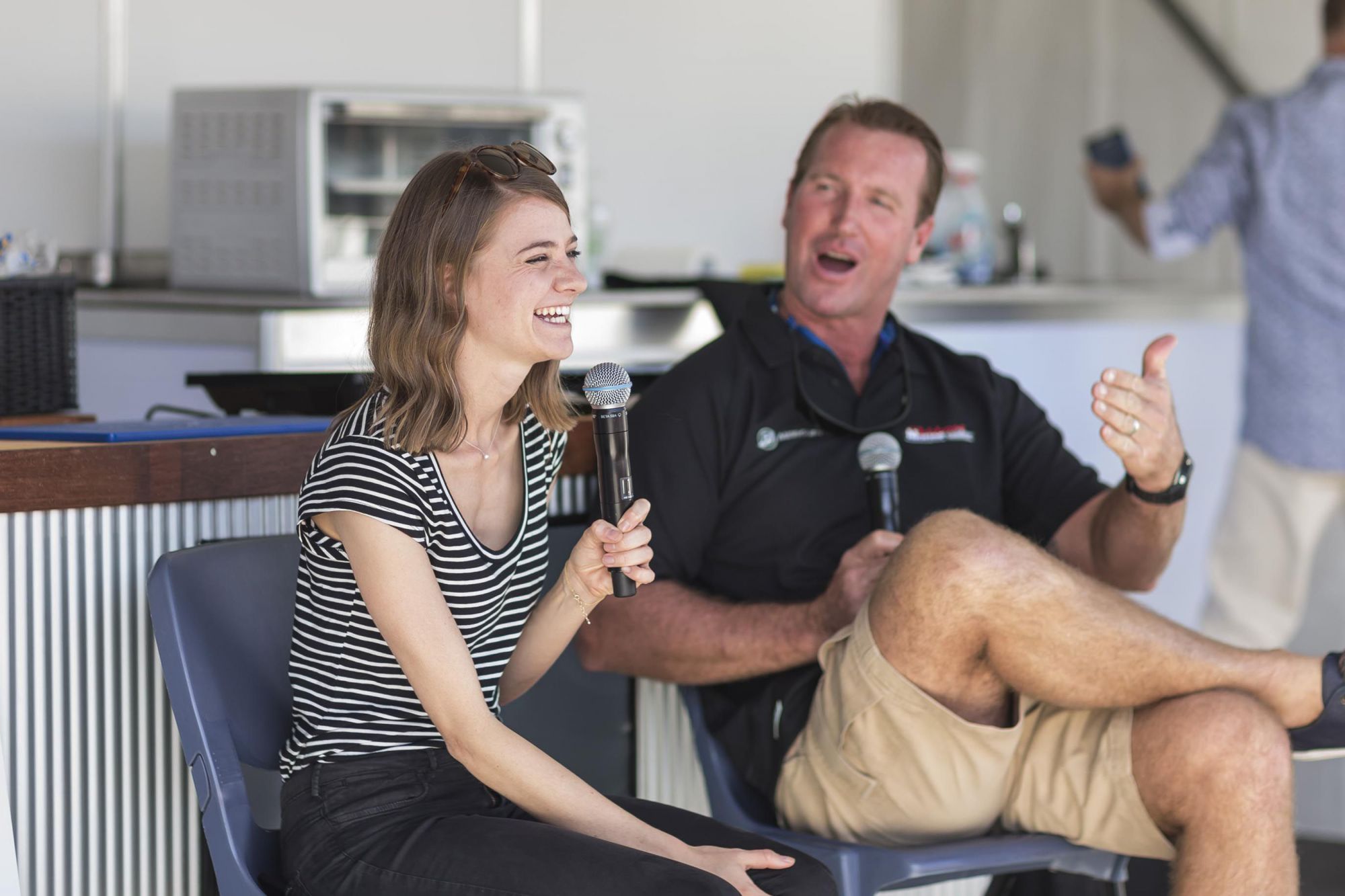 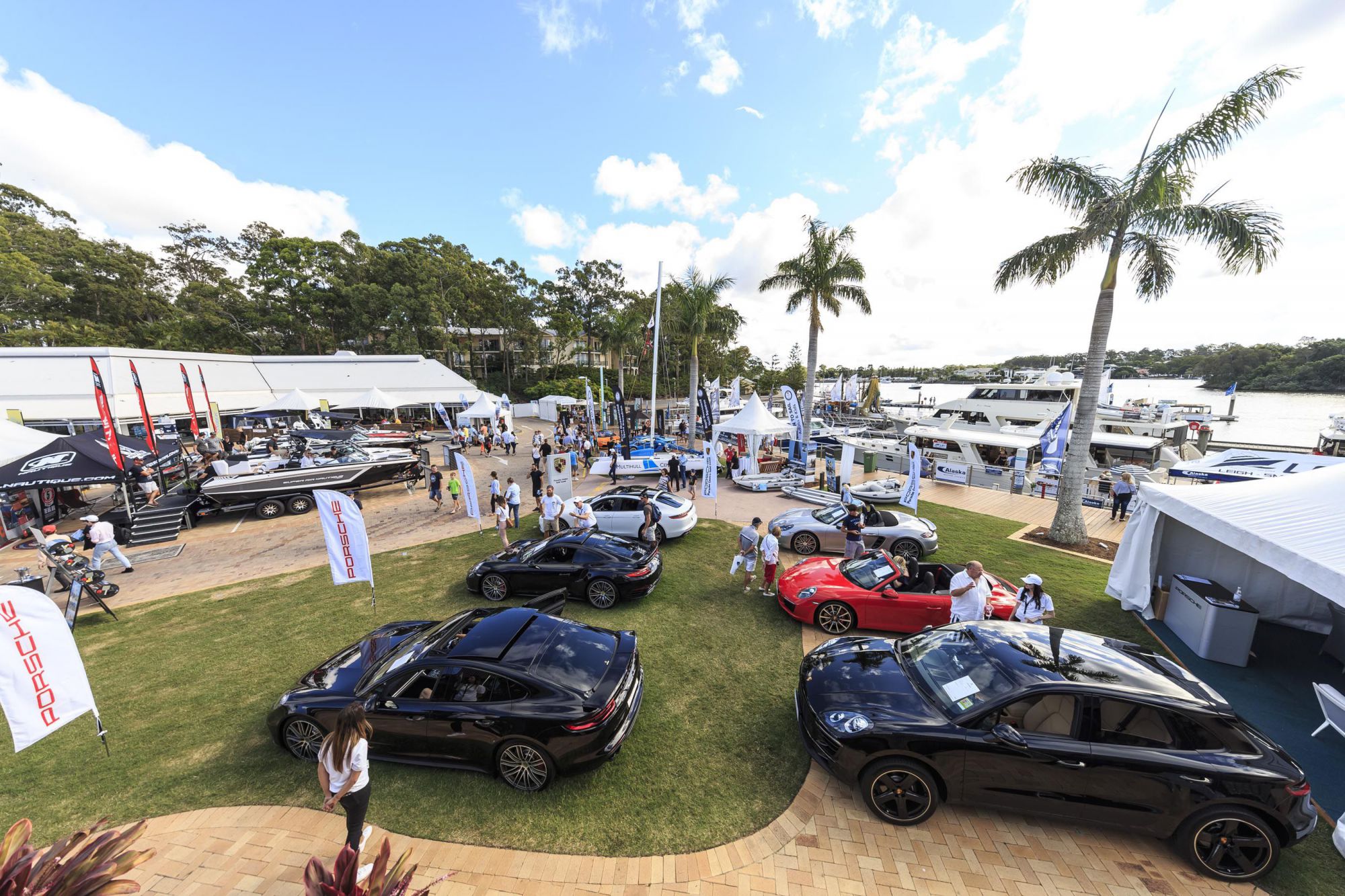 Supercars added to the mix. 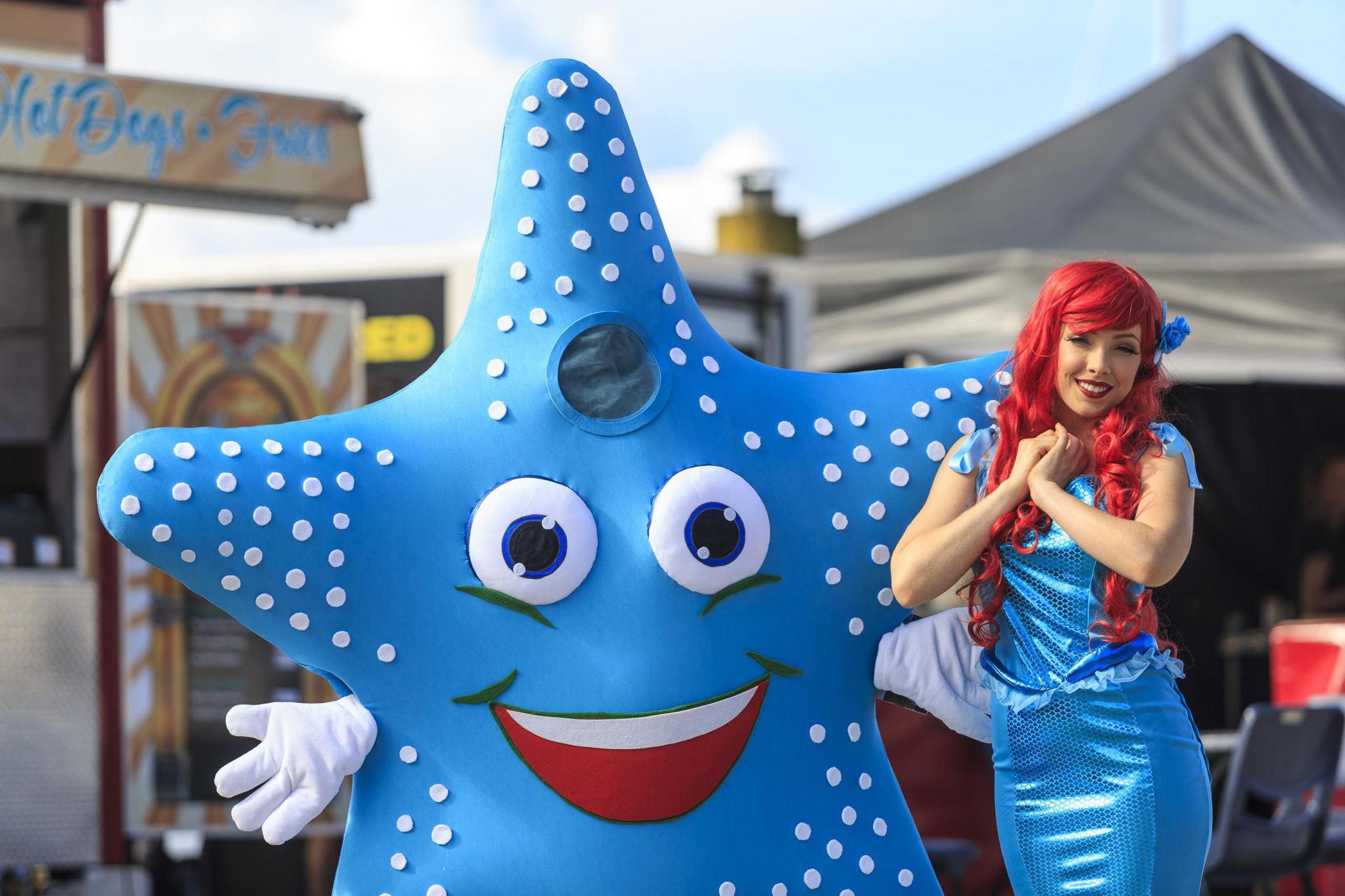 Mark Elkington from Multihull Solutions said he and his team have had a great Show and dubbed it one of the best in 20+ years of exhibiting.

“We sold a boat on the first day, a Fountaine Pajot MY 37, then on day three, the Helia 44 on display and two orders, plus ahead we have strong interest in the Lucia 44, Helia 44 and MY44, with sea trials in the coming weeks,” he said.

“A total of $3.8 million in sales makes it worth coming. It’s nice to leave with unconditional sales, and contracts to complete in coming weeks”.

Mr Elkington said the multihull market was going from strength to strength, across the board.

“There’s every sign it’s growing and evolving, gaining confidence,” he said. “At SCIBS this year, there were buyers from all around the region, NZ and Australia. We are progressing three sales, one from Singapore, another for a NSW client and the third for NZ. It’s a real Asia-Pacific show, which is great for exhibitors, particularly for our business which has offices in those markets.”

With a substantial presence on water, Sanctuary Cove-based dealer, Integrity Motor Yachts is celebrating multiple sales and excellent leads for the coming weeks.

Brett Flanagan, owner and dealer principal said they had sold a new Integrity 53 Grand Sedan, a one-year old trade-in 490 Grand Sedan, and a new 440 Grand Sedan with the 2017 layout and they were expecting more to come.

“This has been the best SCIBS for many years, for us, the biggest since we started exhibiting eight years ago,” he said.

Integrity had four boats on water and a floating showroom presenting the options and fitout in partnership with 3 Beaches interior specialists who, Mr Flanagan said had done a tremendous job at lifting the boats to the next level.

“Next year, we hope to have a full range of seven boats on water and really go all out. It has been worth it this year,” he said, hinting at a larger 65-footer model in the pipeline ready for SCIBS 2018.

“We had a strong Boat Show which has resulted in the sale of the 49 Squadron and it looks like at this stage the sale of a 53 GT as well,” he said.

“So, two new orders out of the Show directly. On the brokerage front, we’ve also closed a 72 foot Endurance which was built by Hampton Yachts and in the lead up to the Show we closed the brand new 47 Alaska.”

Neil Webster from Sirocco Marine said SCIBS 2017 had resulted in multiple sales, very solid interest across the brands and several sales over the four days, with many leads to follow up.

“We love Sanctuary Cove, the atmosphere and the weather. There are a lot of big boat buyers around this year – everything is positive.  We will be back in 2018, planning bigger space . . . onward and upwards.”

In The Boatyard and on-water, Queensland Marine Centre (QMC) enjoyed excellent exposure which resulted in several sales across its brands. Dealer principal Andrew Bennett said the team had sold a lot of boats under 30-foot and a few over 40-foot.

“We sold two Searays and half a dozen Boston Whalers,” he said. “It was a fantastic Show and all the feedback indicates visitors had a top experience. We saw heaps of Kiwis, plenty from Melbourne and NSW and lots of locals. We should have a big week coming up with sea trials to seal away a few more deals, probably the same amount again – eight or so in the next few weeks.”

Bill Hull, sales manager at Northside Marine said the Show netted six sales for the company across the four days, equating to more than $1 million.

“We’ve sold three Whittleys, a sports boat and two fishing boats – this has definitely been a better year than last year,” he said.

From RIB Force Inflatables, Mike Orsmond said Thursday, Friday and Sunday were bumper days, which resulted in exceptional leads and some sales.

“We’ve sold 10 to 12 open RIBS mainly as tenders, four centre consoles in the AB RIBS and one Aurora, and some larger models to commercial clients, as well as many leads we have to get through in the next couple of days,” Mr Orsmond said.

“We’ve done a lot of Mercury outboards as well, including Verados which are the premium range. We had good support from Mercury, which helped.”

A veteran of around 24 editions of SCIBS, Mr Orsmond said SCIBS was returning to its former glory as one of the most significant shows on the boat show calendar.

Jeff McNiven, owner of JSW Powersports said they had sold three Malibu wakeboats, which they were showing for the first time at SCIBS in 2017.

In the Pavilions, sales in the marine technology sector soared across the Show, with Damian Weaver, general manager of Raymarine saying the products had been extremely well received.

“There’s been a lot of interest in our new Axiom navigation product, which was released back in February, and this was one of the first public showings of it, so that’s gone really well,” he said.

This year’s SCIBS saw the return of the popular Supercar Street, with major sponsor Bentley Brisbane spokesperson Clinton Wright saying the Show provided the opportunity to engage with both existing and new customers in the perfect lifestyle setting.

“We’ve had more than 250 customers visit us for the launch of our Bentayga Diesel and Supersports models, so it’s been great to showcase our brand in conjunction with the lifestyle at Sanctaury Cove.”

SCIBS general manager Johan Hasser said The Marine Village was abuzz on the last day of the Show, with tens of thousands of families enjoying the closing day.

He said feedback from exhibitors was that the Show had been an overwhelming success, with renewed buyer confidence evident across all market segments.

“The Show opened strongly, with visitor numbers up and strong sales recorded on the first day, and it improved even more across the weekend,” Mr Hasser said.

“Our exhibitors have reported some of the best sales results we have seen in years and likewise, have received a great number of enquiries and sales leads, which historically, has shown that many more deals will be made in the coming weeks and months following the Show.

“We owe this year’s success to a combination of great product offering, dedicated exhibitors, an exciting Show format and superb weather. We are really pleased with the result.”

Running May 25 to 28, 2017, the southern hemisphere’s premier marine event attracted 300 exhibitors, with boats and products on show worth more than $200 million, as well as major global, Australian and Queensland debuts by the world’s most respected brands and businesses.

Far & away a beautiful Benetti

New territory for Sanlorenzo with SX88

Far & away a beautiful Benetti

New territory for Sanlorenzo with SX88