Princess Yachts has reported that last week’s Cannes Yachting Festival and Southampton Boat Show marked a strong start to the European boat show season for the brand. Figures released by the British motor yacht builder show that the company’s current order book stands at a value of £640 million, which represents a “like-for-like” increase of 85 percent on last year’s figure.

At a time when there is uncertainty on how Brexit might affect the market for British companies against international competitors as well as buyers, Princess Yachts is clearly emboldened by these recent figures. The company is in the midst of a £100 million, five-year investment program, which will incorporate new product launches and business strategies.

It was a busy week for Princess, which launched a two new flybridge models as well as partnerships with yachting and luxury brands at the yacht shows in Cannes and Southampton. 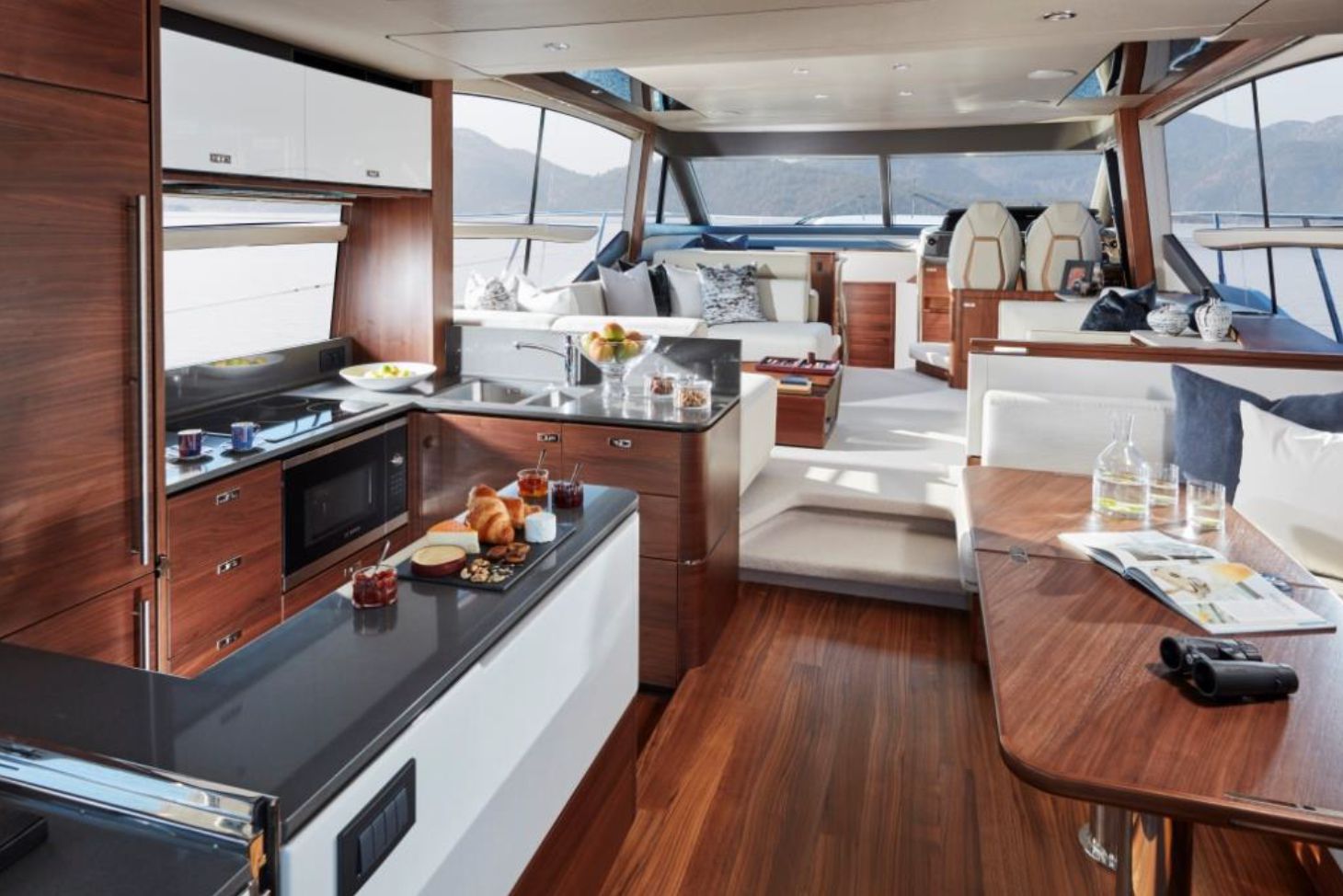 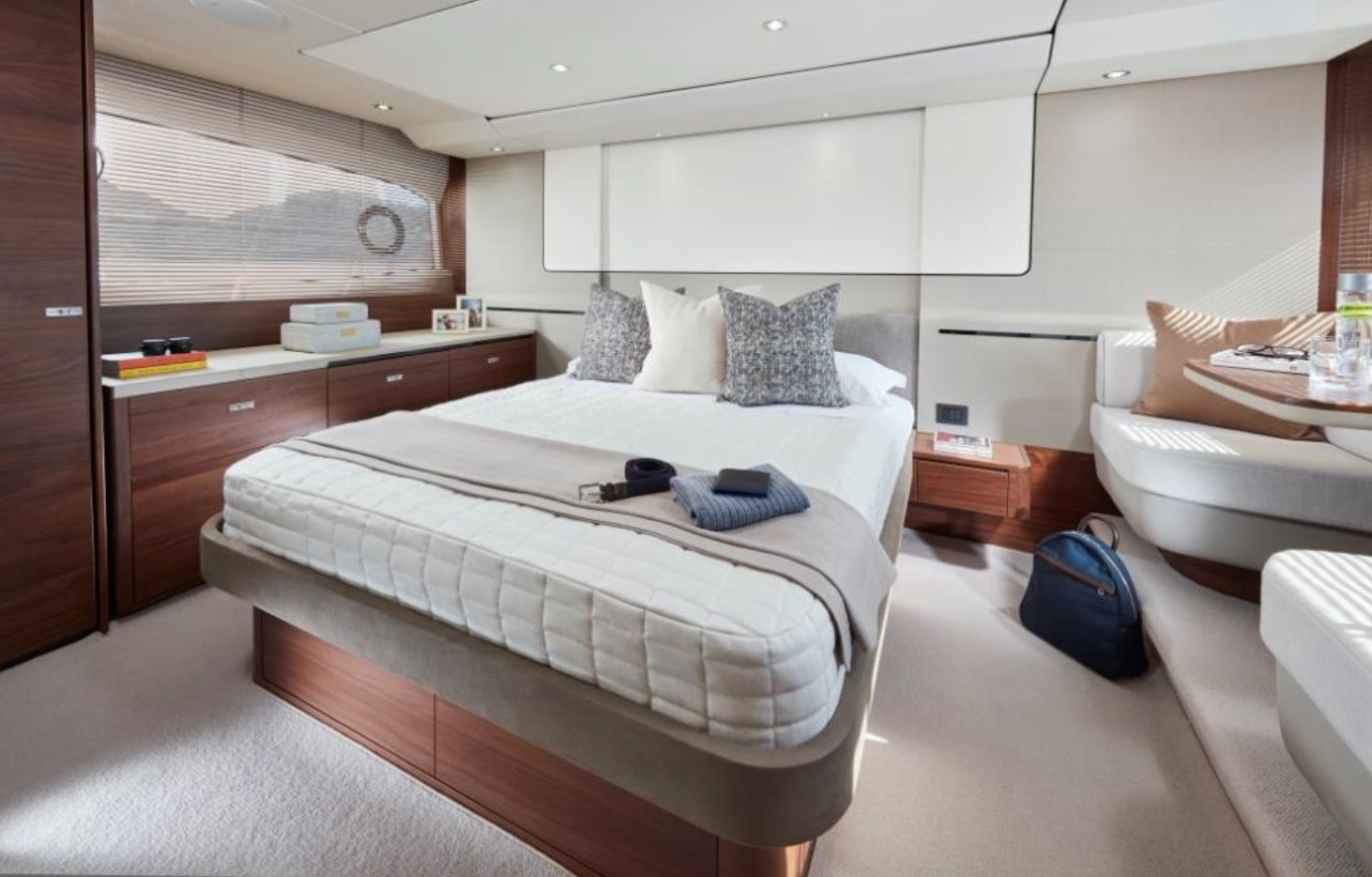 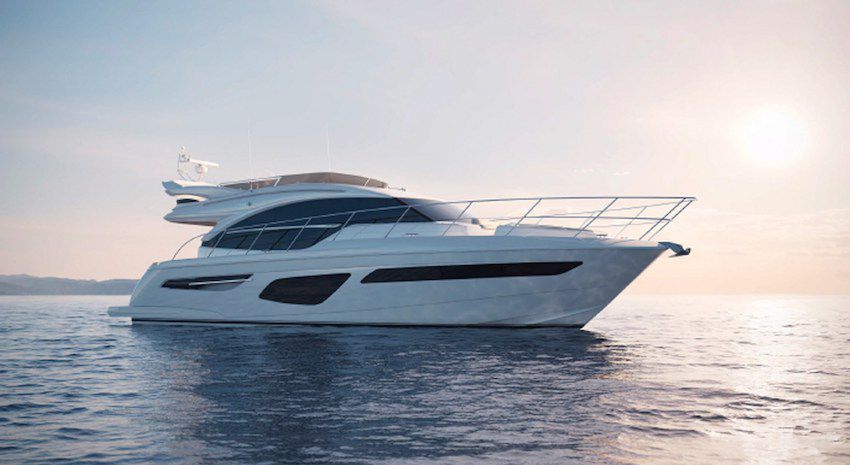 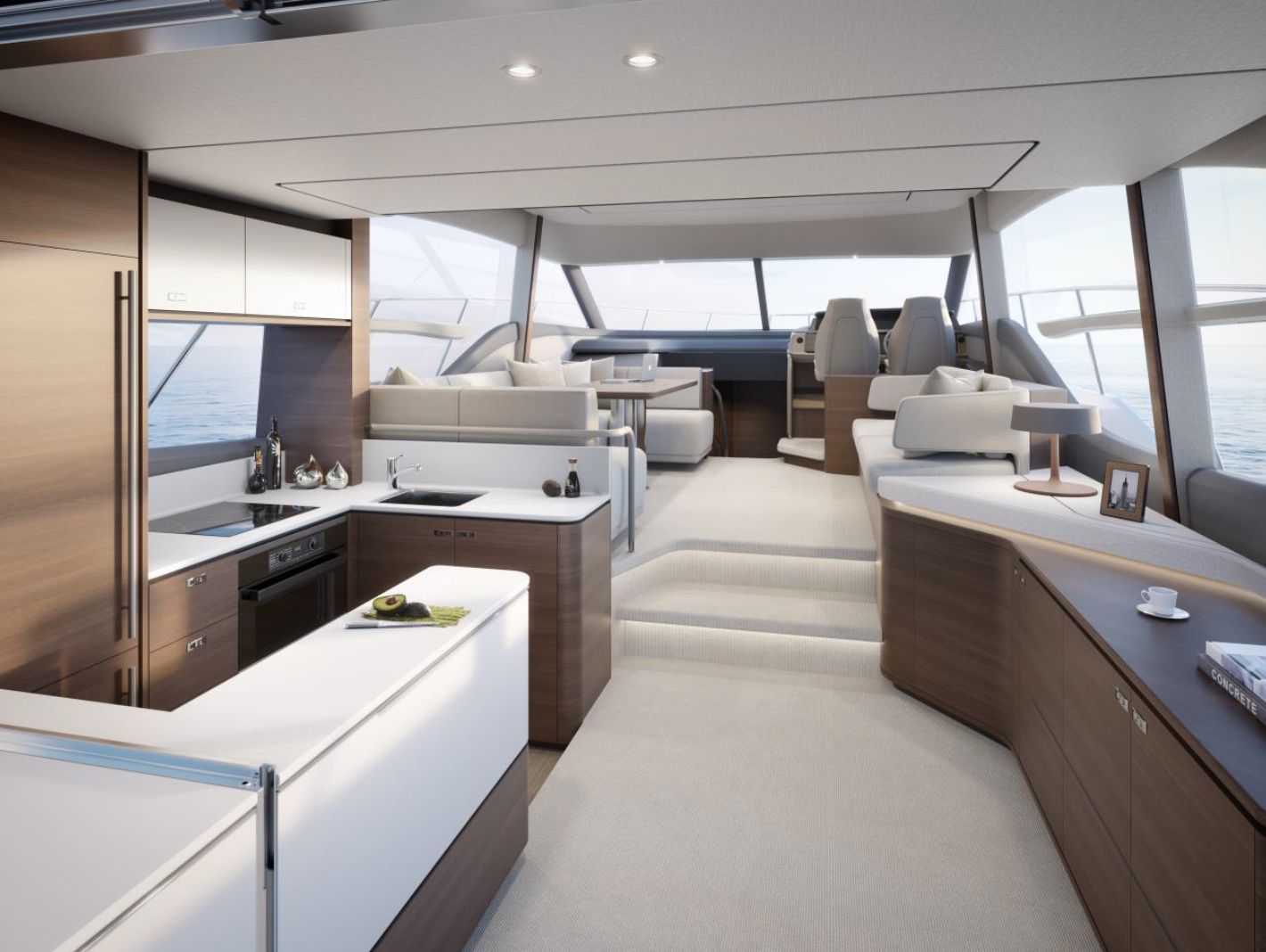 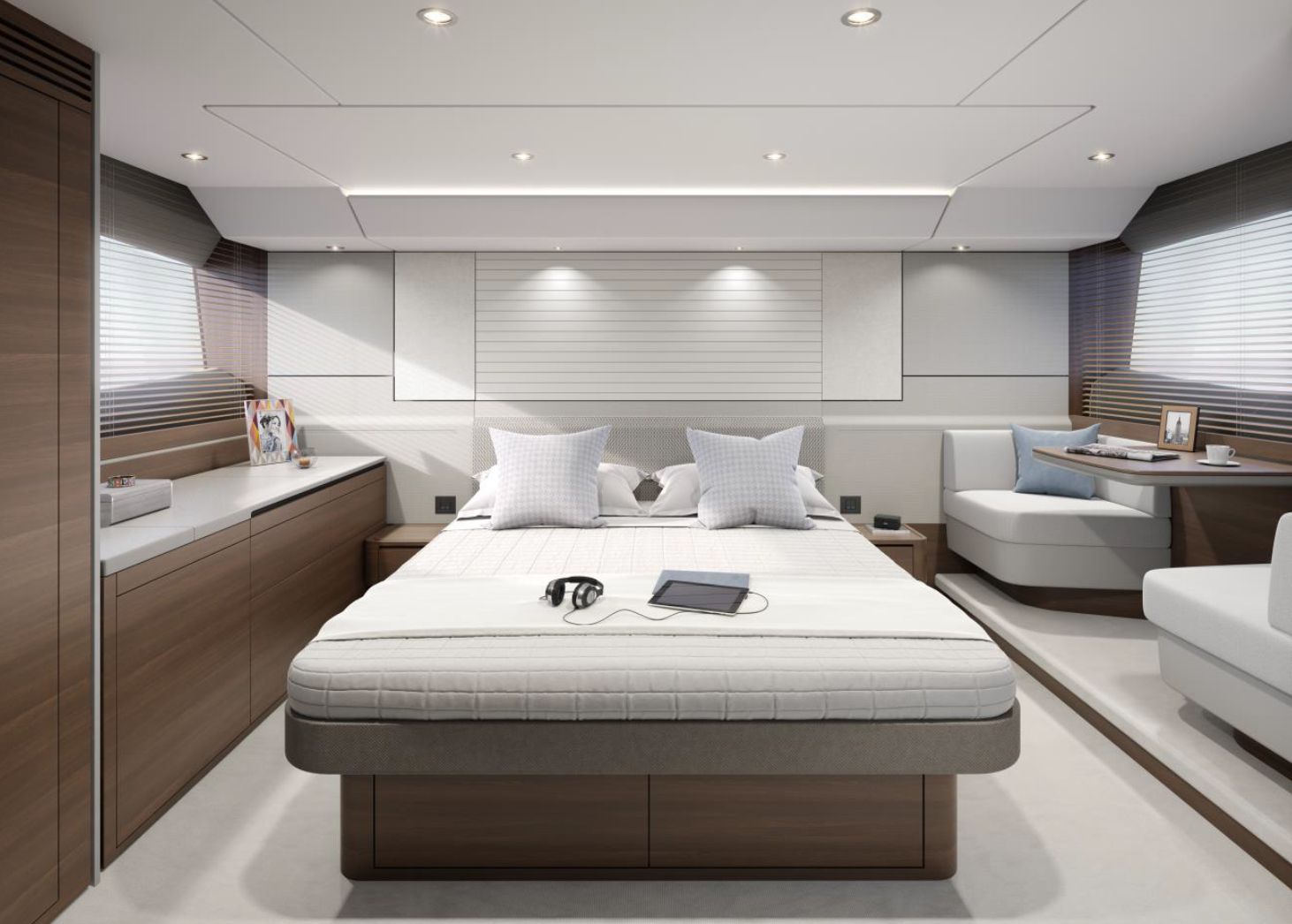 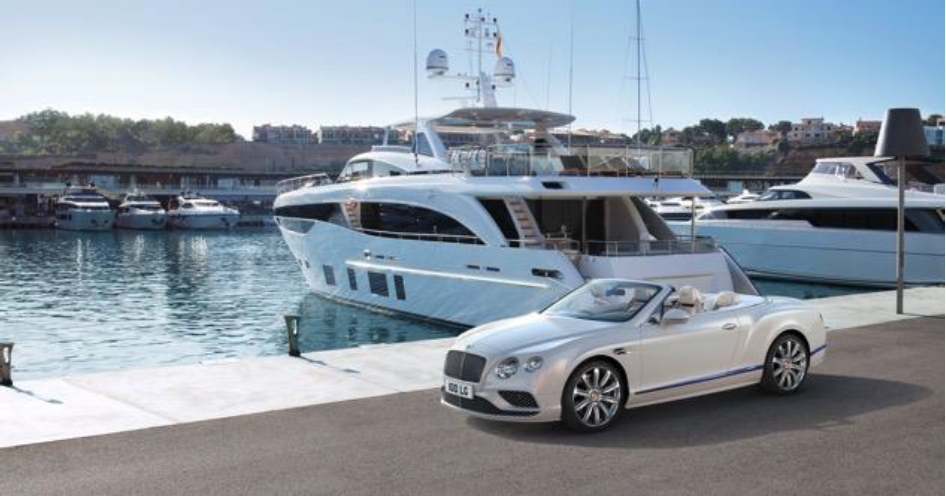 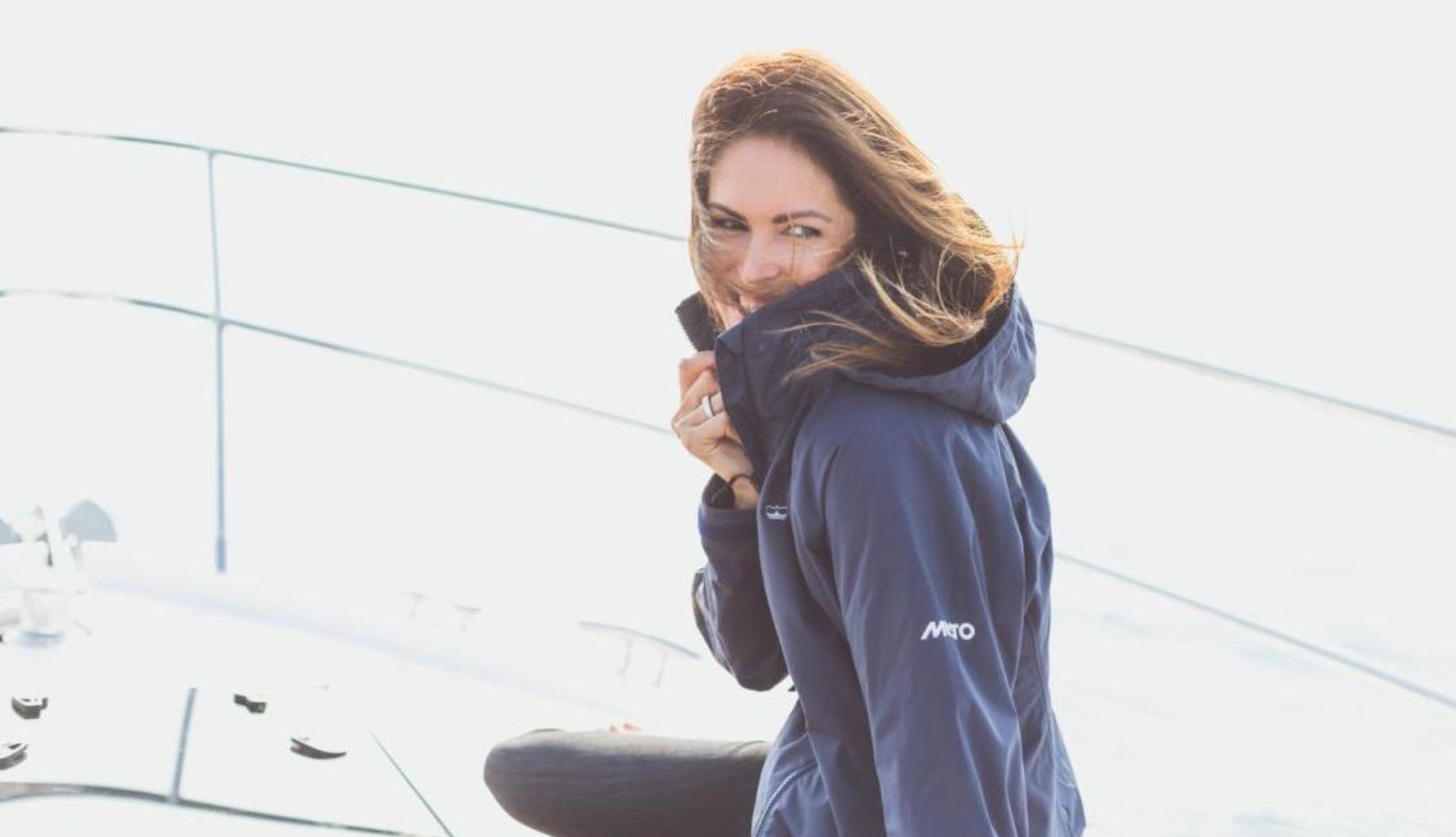 PRINCESS 62 FLYBRIDGE
In Cannes, visitors were witness to the global launch of the 19.34-metre Princess 62 flybridge. The yacht bears many of the Princess hallmarks on its exterior profile, but incorporates newly designed, larger hull side windows for a dynamic aesthetic. It can achieve top speeds of 32.5 knots with twin Caterpillar 12.9 1000 engines (or 31 knots with twin Volvo D13-900 engines) thanks to a newly optimised, efficient hull form.

On its flybridge, the yacht’s large dining area is complemented by an aft sun pad and forward seating area that can be converted to a second sun pad. Following the trend for foredeck use, there is a walk-through design to improve access while the hydraulic swimming platform at the aft will be a hit with all the family.

Bespoke interior finishes and hand-crafted details are seen throughout the interior, which has accommodation for six guests in three ensuite cabin, including a full-beam owner’s suite, with a further twin ensuite cabin located to the aft of the engine room for occasional guests or crew.

The new Princess 62 epitomises the beauty and ultimate sophistication we set out to deliver with every new craft. The 62 delivers a fresh look and feel whilst maintaining all of the traditional qualities of craftsmanship and refinement which are synonymous with Princess and the Princess Design Studio,” said Andrew Lawrence, the company’s head of design.

In the same week, Southampton Boat Show played host to the global launch of the 17.60-metre Princess 55 flybridge. Featuring clean and modern interior with contrasting textures and materials, the Princess 55’s larger exterior side windows on the hull echo the new look of the Princess 62.

Its flybridge features extensive seating, including a folding dining table, optional electric barbecue and L-shaped companion seating to the starboard side of the twin helm seats, which converts to a sun pad. The walk-through foredeck features seating and a sun pad, like the layout of its Princess 62 big sister.

The main deck’s layout encourages alfresco dining in the cockpit just a few steps from the aft galley, leading through to a dining and lounging space up two steps. Large windows give a sense of light and space throughout.

The lower deck has accommodation for up to six guests in three ensuite cabins, as well as a further single ensuite cabin by the stern which would suit an occasional guest or crew. For performance, owners can expect to achieve speeds of up to 33 knots from twin MAN i6-800 engines.

A RAFT OF COLLABORATIONS AND PARTNERSHIPS
As well as model launches, last week Princess announced its innovative after-sales “Princess Lifeline” package in partnership with Medaire. The innovative will include two years of 24/7 International SOS medical and security assistance cover as part of a yacht purchase.

Away from the water at Cannes, Princess revealed its collaboration with luxury British automobile brand Bentley with the limited-edition Continental GT Convertible Galene car. The Princess Design Studio worked with designer Mulliner to create the new GT model that was inspired by the design and craft of Princess’s luxury yachts. With a glacier-white finish featuring a flash of sequin blue on its lower brightware, the darkened front and rear lamps are reminiscent of the tinted windows seen on Princess’s fleet. The pinstriped walnut veneer of the central console is designed to emulate the lines of teak decking on a yacht.

MORE NEWS IN THE PIPELINE
More news from Princess is expected in the coming months, including a refreshed V Class portfolio by way of the all-new V65 and V60 models to join the acclaimed V58 and revamped V40 which made its debut at the London International Boat Show in January. Sheriff announced during the Cannes Yachting Festival that major design innovations can be expected from Princess with the unveiling of a new, cutting-edge line in the near future, which Princess has called “radically different”.