One of the most exciting, outrageous and diminutive creations ever to wear the famous Aston Martin wings will be making its world debut at the 2018 Goodwood Festival of Speed.

Dubbed the ultimate city car, a one-off Aston Martin Cygnet has been built with a 4.7-litre, 430bhp V8 engine.

The V8 Cygnet has been brought to life for a single customer through the Q by Aston Martin Commission service.

Aston Martin Vice President & Special Operations Officer, David King said, “The V8 Cygnet shows the fun side of both Aston Martin and its customers. It is also a fine example of the engineering talent within the company as its no small achievement to fit the Vantages V8 engine so harmoniously into the Cygnets compact body. I am sure that it will amaze and thrill people when they see and hear it on the hill at the Festival of Speed.”

Developed in-house by Aston Martins engineers, the starting point for the project was a right-hand drive Cygnet steel body shell and panels. A roll cage was welded to this, becoming an integral part of the chassis in the process, while a new front bulkhead and transmission tunnel were fabricated from sheet metal to accommodate the characterful 4.7-litre naturally aspirated V8 Vantage S powertrain. Subframes and suspension are also derived from the previous generation Vantage and a steel fuel tank housing has been mounted in the boot area, utilising every inch of space. 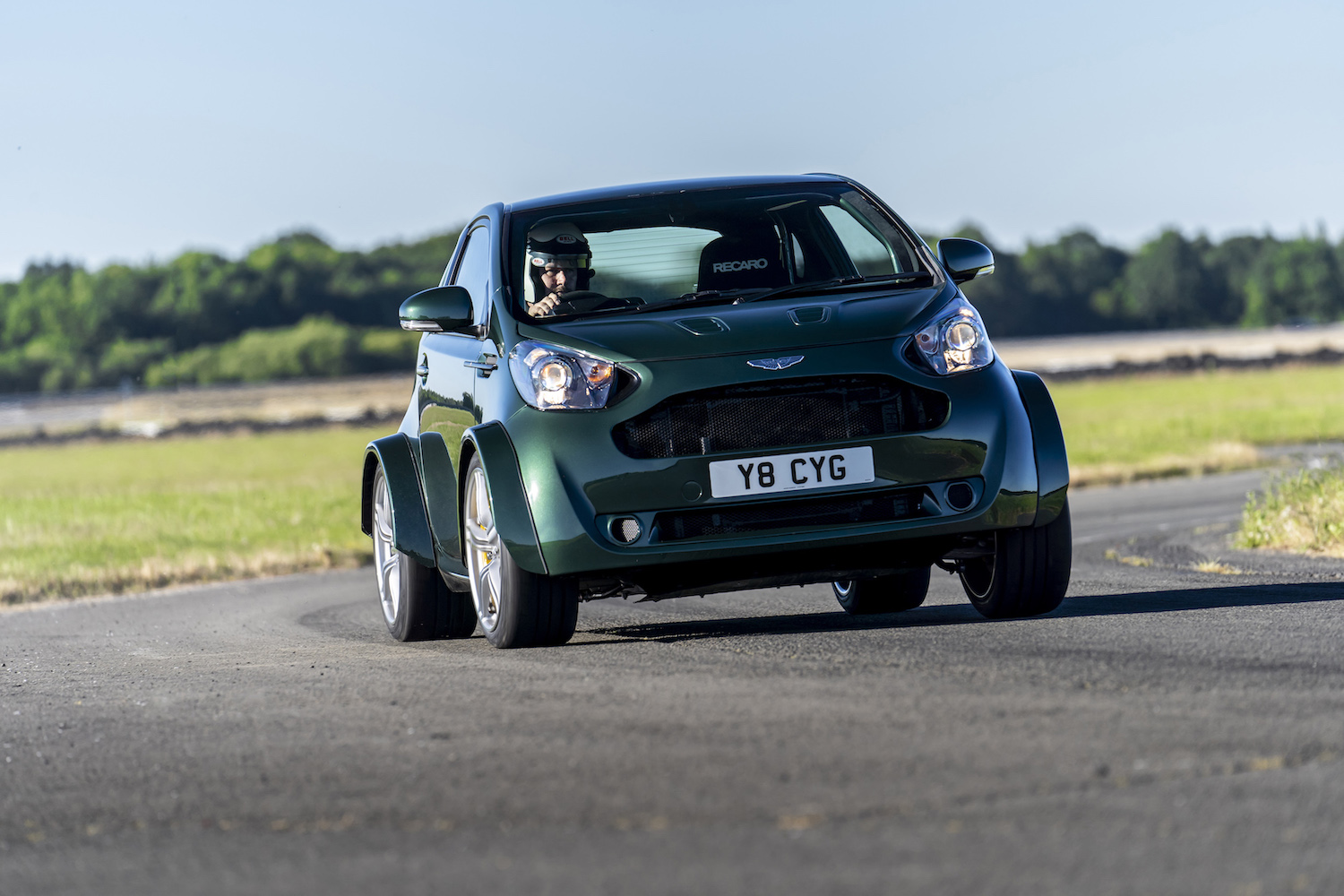 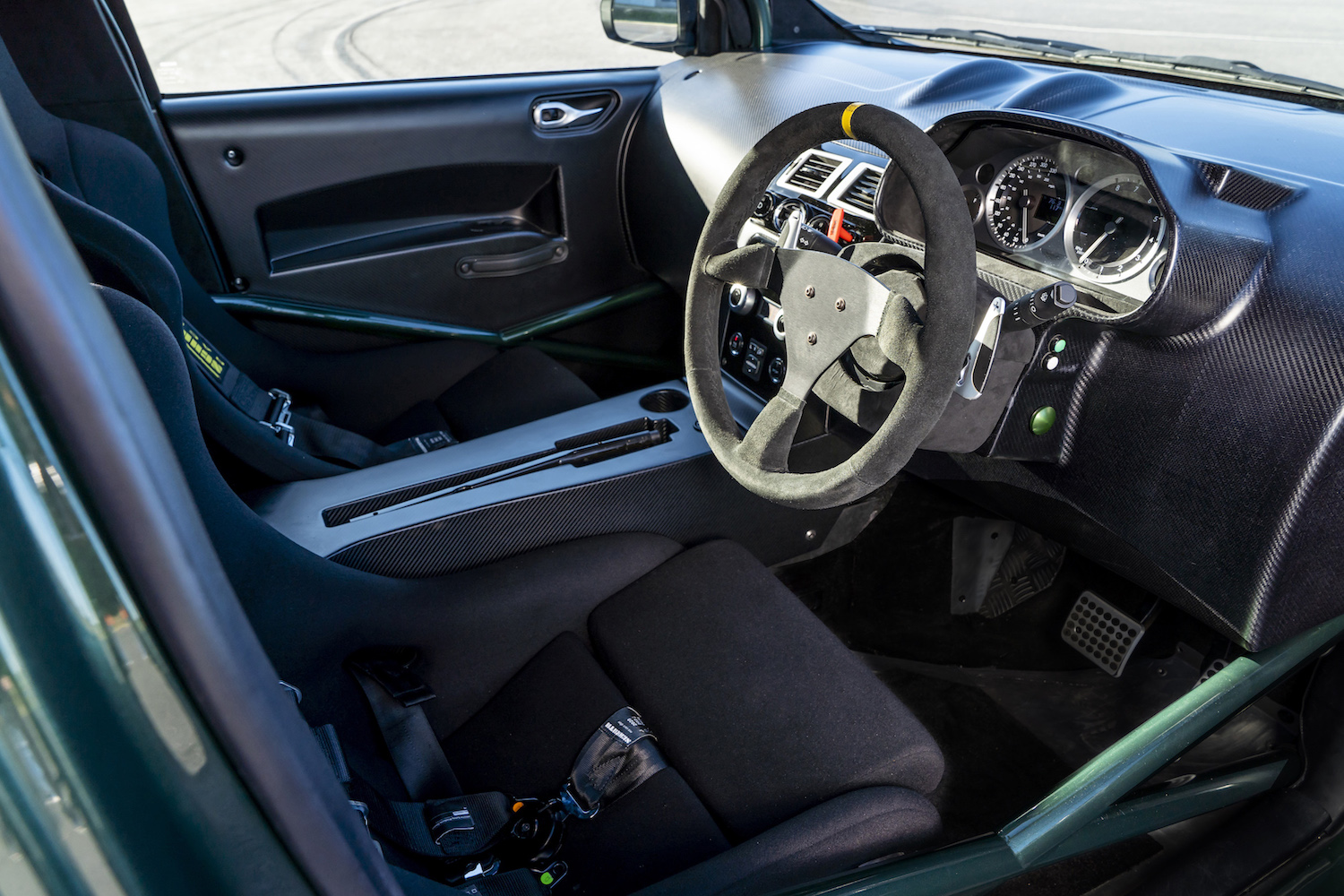 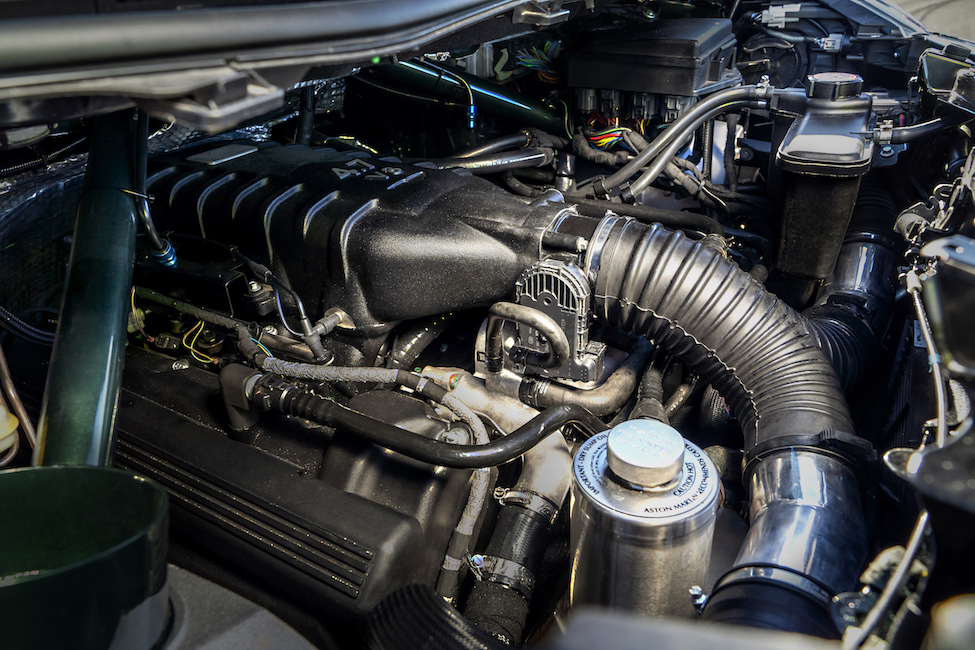 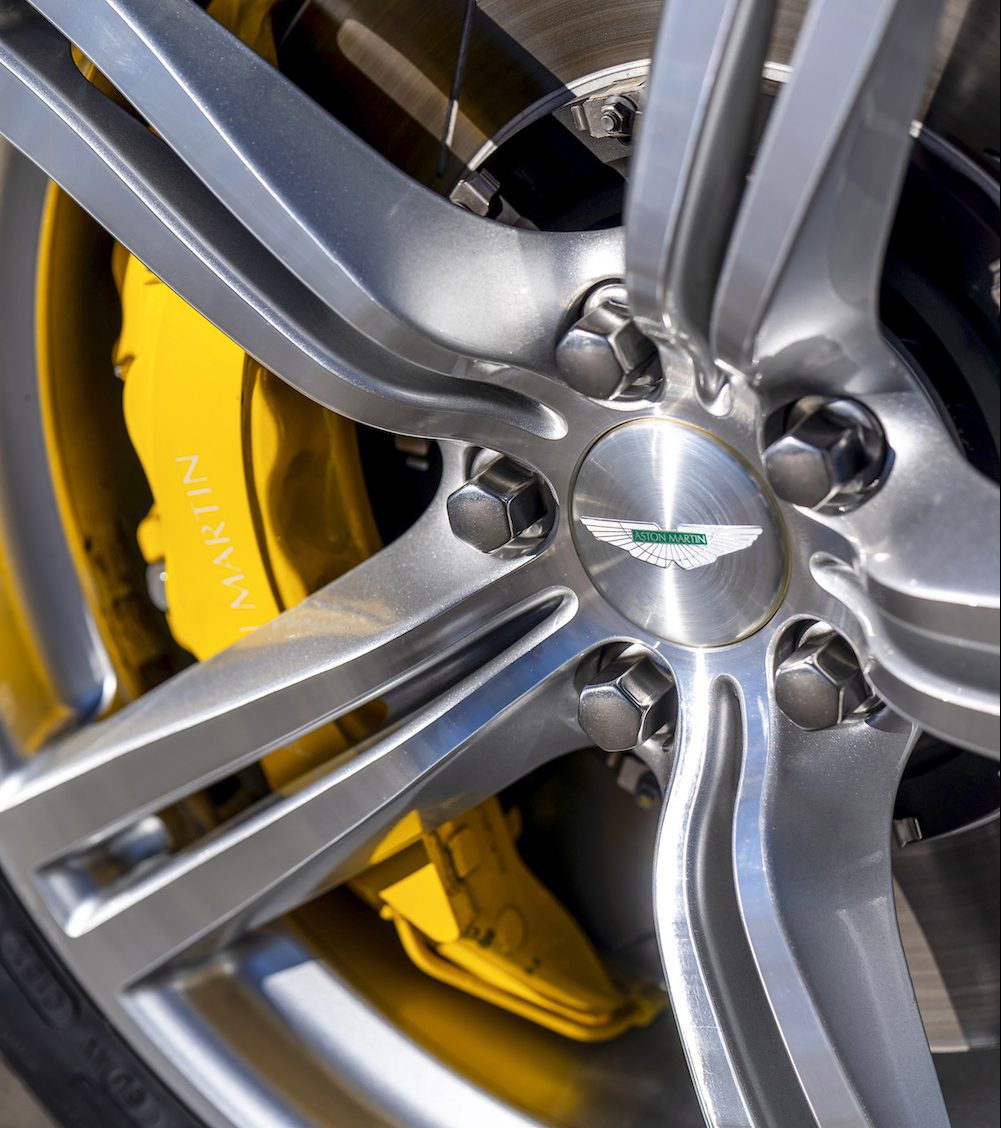 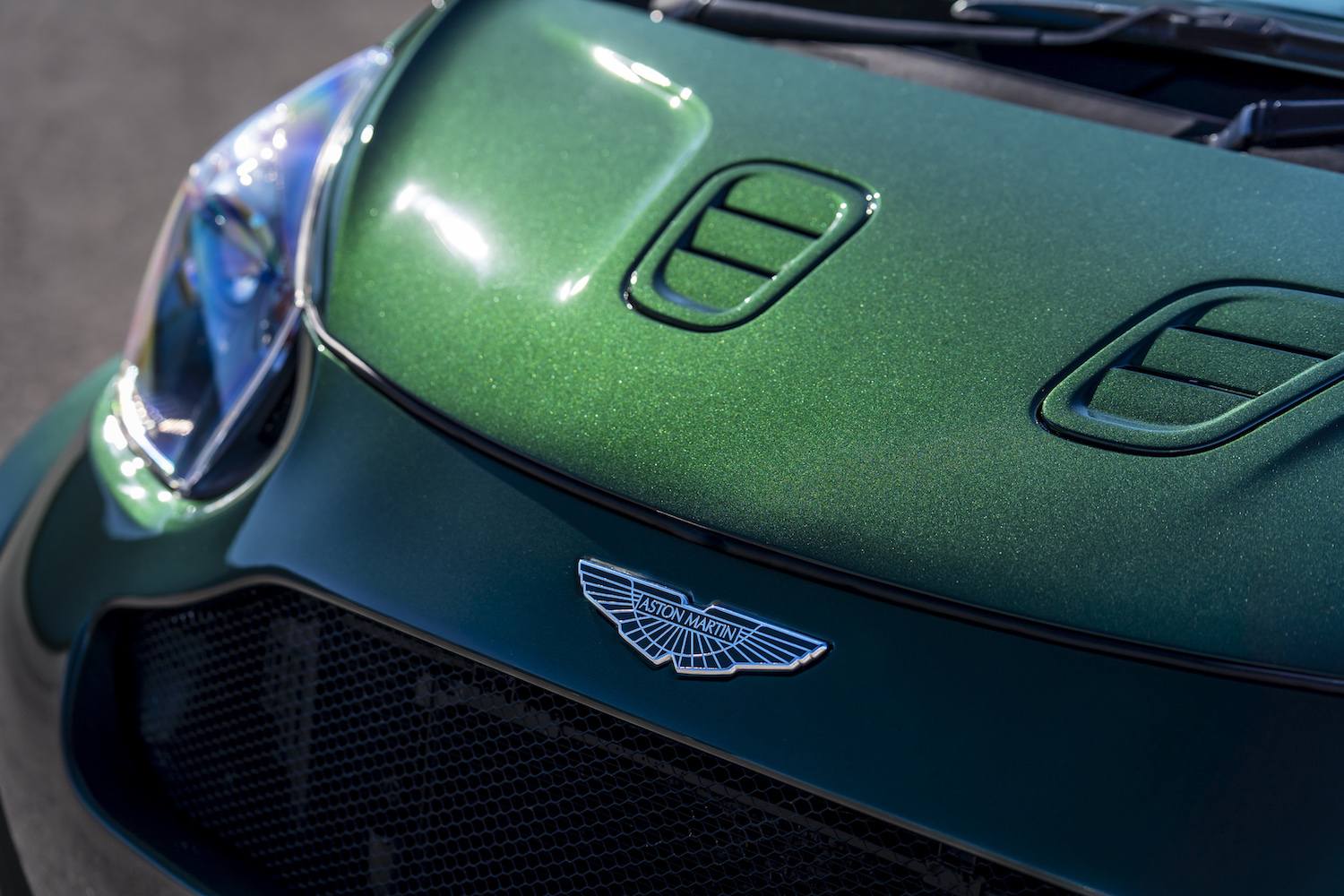 Despite all this work, the car remains very recognisably a Cygnet from the outside. The face of the little Aston Martin remains largely untouched, with no extra bulges in the bonnet and just a subtle black mesh for the famous grille. However, there is no disguising the extra width of the wheel arches. In order to accommodate the significantly wider front and rear tracks, carbon composite flared extensions were made. These also house the new forged, five-spoke, diamond-turned wheels, which have grown from 16 to 19 in diameter.

At the rear of the car the distinguishing new feature of the V8 Cygnet is the central twin exhaust pipes. The exhaust is a bespoke system with twin underfloor mufflers and catalytic converters. With relatively short distances involved from manifold to tail pipe the V8 Cygnet has a voice that belies its compact size.

The engine itself is the 4.7-litre, naturally-aspirated V8 that is more usually found beneath the bonnet of the previous-generation Vantage S. Bespoke intake trunking had to be designed and there are twin conical air filters.

The engine has not been neutered for the Cygnet, however, with power and torque figures remaining at 430bhp and 490NM (361lb ft) respectively.

The gearbox is also taken from the V8 Vantage S with a seven-speed Sportshift II transmission taking care of the shifting. Power is transferred via a miniature torque tube to the 9.5 rear wheels, which are complemented by 275/35 Bridgestone tyres.

Braking is taken care of by 380mm discs clamped by six-piston monoblock calipers at the front and 330mm discs gripped by four-piston mono block calipers at the rear. The calipers are painted yellow to contrast with the Buckinghamshire green of the bodywork. Most of the remaining parts of the braking system are taken from the V8 Vantage S with ABS and a fixed brake bias valve. Inside, there is a bespoke brake pedal housed in the V8 Vantage-derived pedal box.

The rest of the interior is largely indicative of the fact that this V8 Cygnet could easily be used for competition. In addition to the roll cage there is a fully FIA compliant fire extinguisher system and seating is taken care of by composite, fixed back Recaro bucket seats with four-point harnesses. The alcantara covered steering wheel is removable and behind this sits a bespoke carbon dash with the familiar Vantage instrument cluster. There are, of course, little touches of luxury inside as well, with leather pull straps on the unique carbon door cards and two USB ports alongside the bespoke controls for the air conditioning.