The 36th America's Cup is shaping up to be a locals-only affair with New Zealand's shuttered border arrangements locking out superyacht owners keen to experience all the event has to offer.

As excitement mounts for the 36th America’s Cup, the likelihood of an influx of wealthy international boat owners is looking more unlikely.

Auckland’s massive multi-billion-dollar marine infrastructure upgrade for the America’s Cup is nearing completion and on budget, but the precinct won’t be hosting tens of thousands of big-spending international tourists and sailing fans when the Cup gets underway from 6–21 March 2021.

Kiwi borders have been closed to all but returning New Zealand residents since 19 March 2020; however, there have been notable exemptions.

The production crew of Avatar 2 was granted permission for a special Air New Zealand charter flight in May; the Wallabies are due in New Zealand next month; and personnel from all three AC challenger syndicates are now dockside in Auckland with less than 12 weeks till racing starts on 17 December for the America’s Cup World Series.

There is absolutely no indication the government is considering relaxing New Zealand’s border clamp-down – at least not before voters decide the fate of Jacinda Arden’s coalition on 17 October. 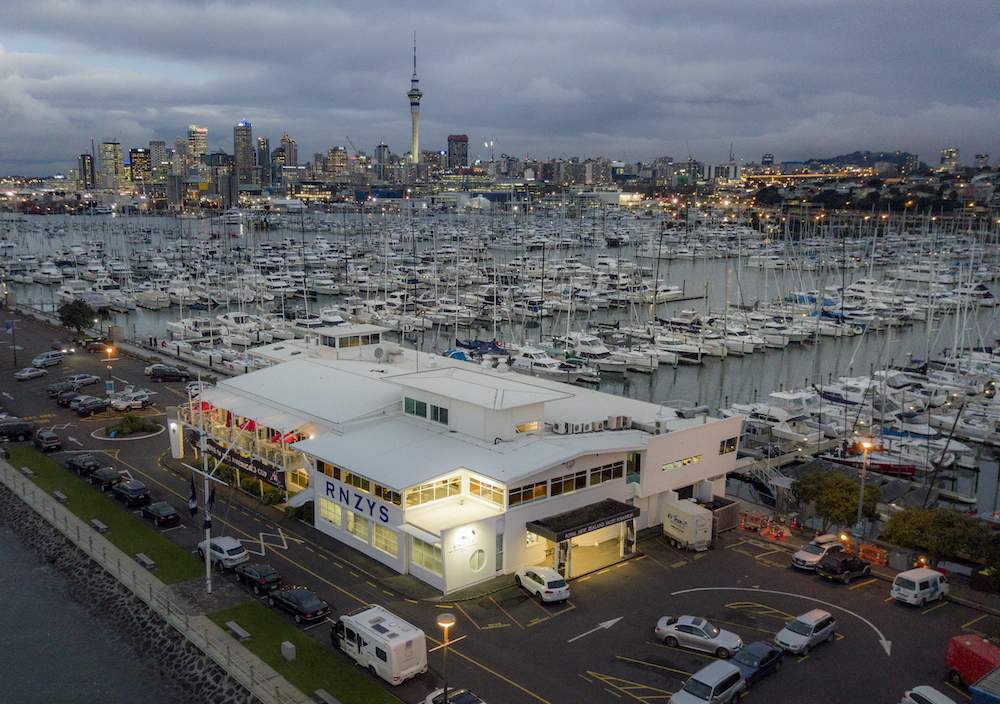 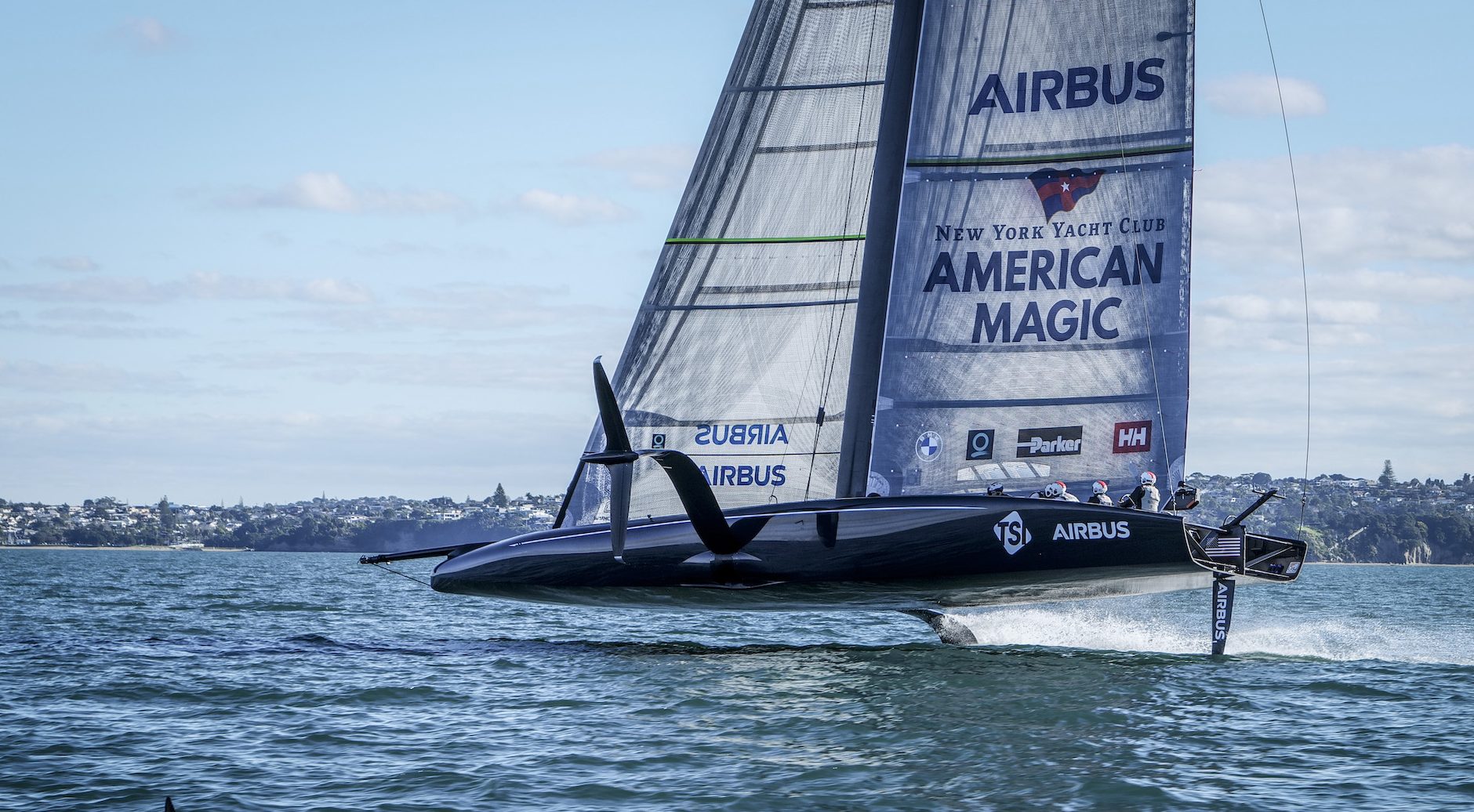 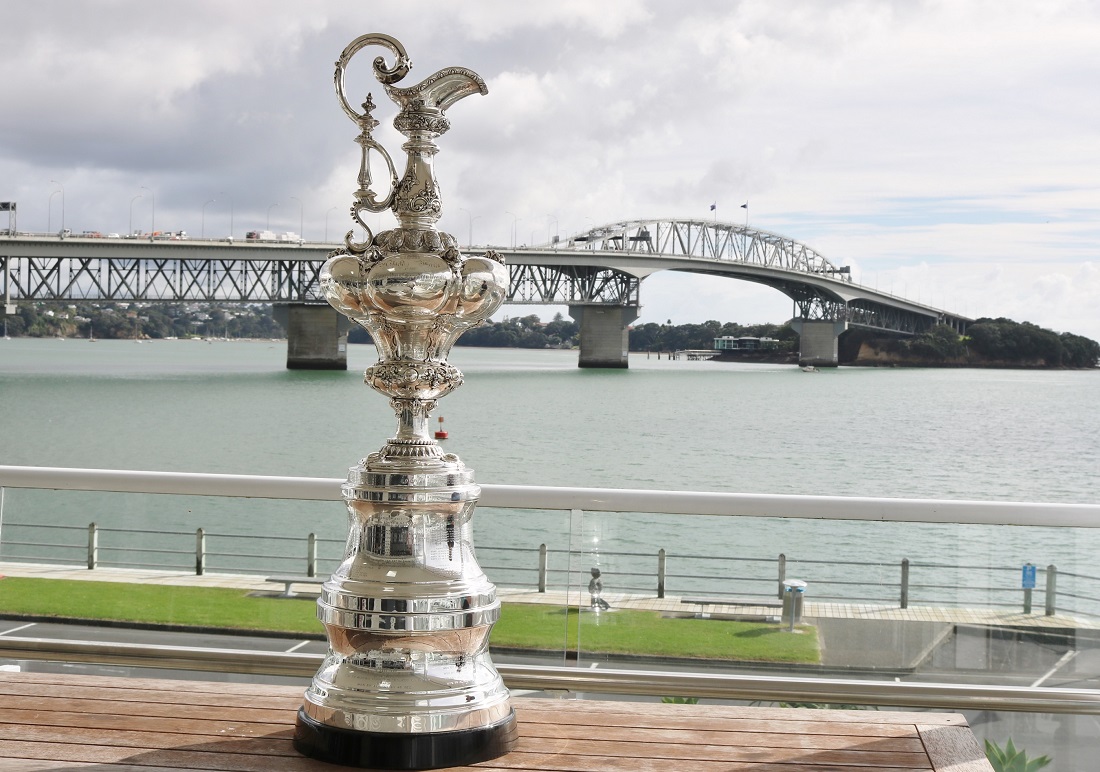 The America's Cup at the Royal New Zealand Yacht Squadron.

While the border closure was essential to tackle the COVID-19 health crisis, there’s no question it has dealt a substantial hit to the New Zealand and Auckland’s economy.

In an effort to mitigate some of the financial pain being experienced by the country’s marine industry that was busily gearing up for an AC uptick, NZ Marine Executive Director Peter Busfield revealed in a webinar that a representation was being made to the national cabinet to allow visiting superyacht owners to come to New Zealand for the America’s Cup.

Busfield is pitching the argument squarely in economic terms. “An average superyacht owner would spend approximately NZ$2 million dollars on a visit. That would include maintenance, some repairs to the vessel and looking after the crew, the owner, and the owner’s family,” he argued in a breakfast television interview.

At the moment, only 36 superyachts have booked to tie up in Auckland for the Cup festivities. That compares to an expected 160 vessels pre-COVID.

Based on Busfield’s spend projection, that’s a shortfall of almost NZ$250 million. No wonder the pressure is being applied to try and plug the revenue hole. Granting special exemptions to just 20 or 30 superyacht owners, however, could see a sorely-needed $100 million injection into the economy that plunged into recession last week.

Australian refit yards benefited from New Zealand’s tough border stance – it’s estimated that from when COVID-19 kicked in between March and July, and Stage 4 restrictions were implemented in New Zealand, exemptions for a number of superyachts previously headed to the Land of the Long White Cloud entered Australia instead for refit work. 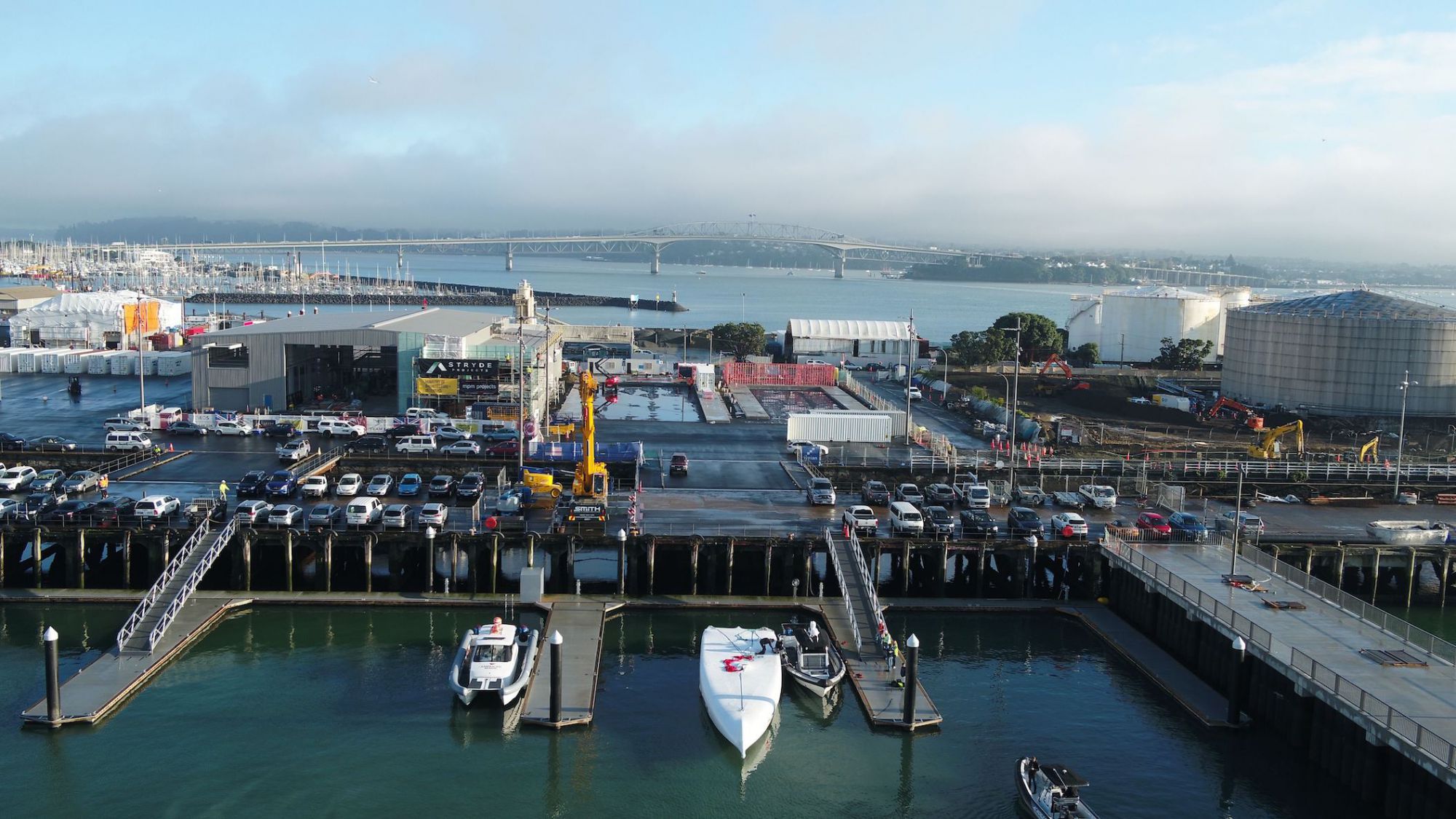 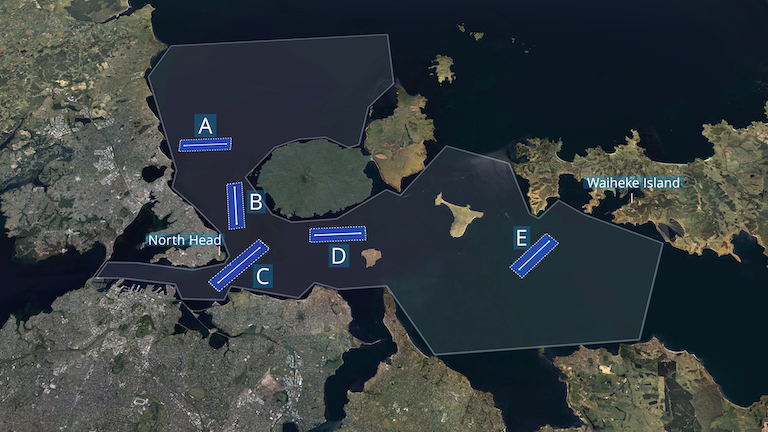 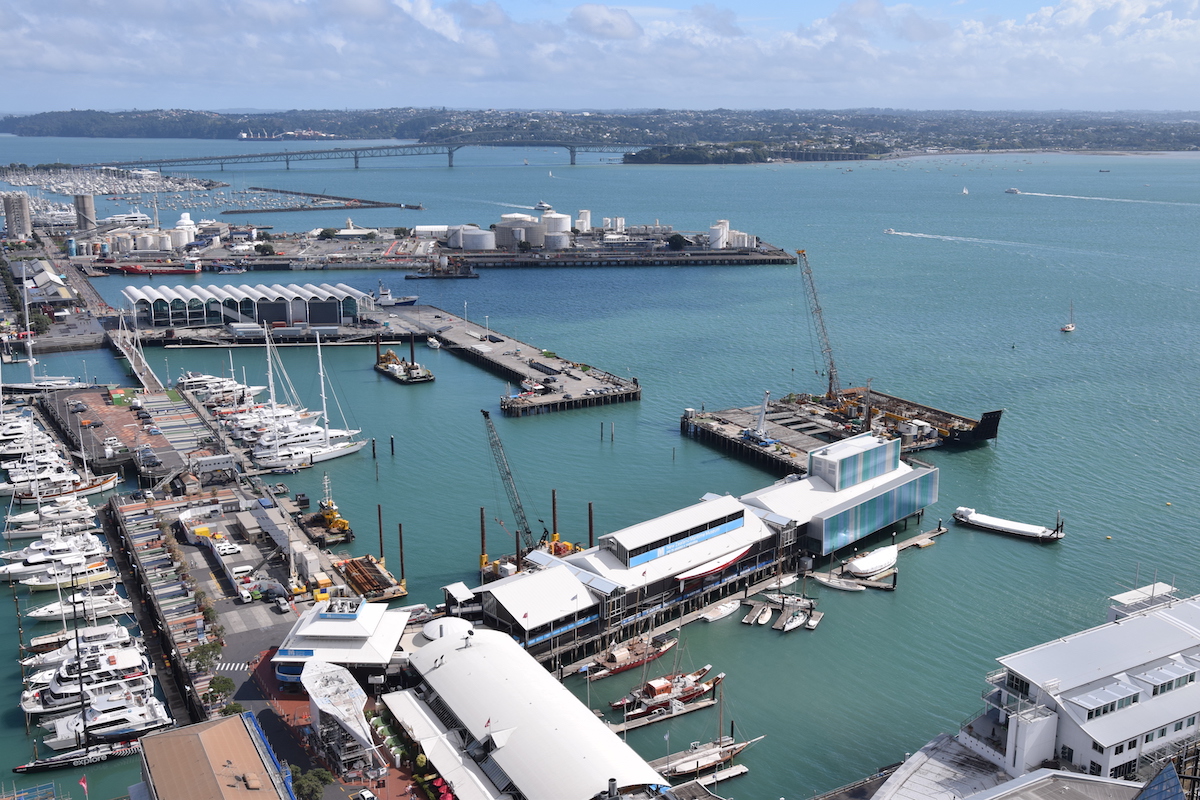 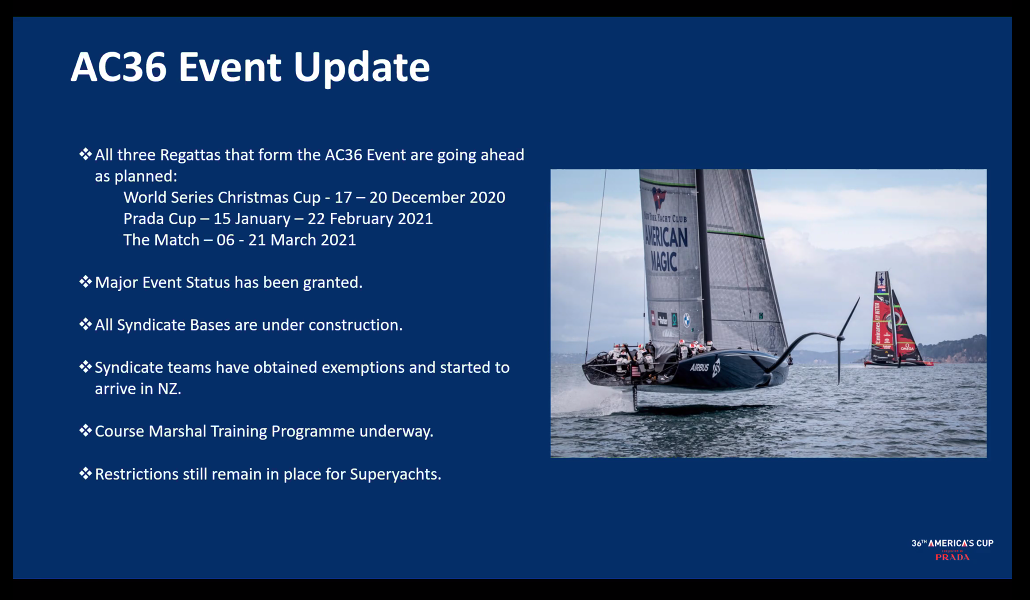 Organisers have confirmed that the America's Cup will go ahead as scheduled. 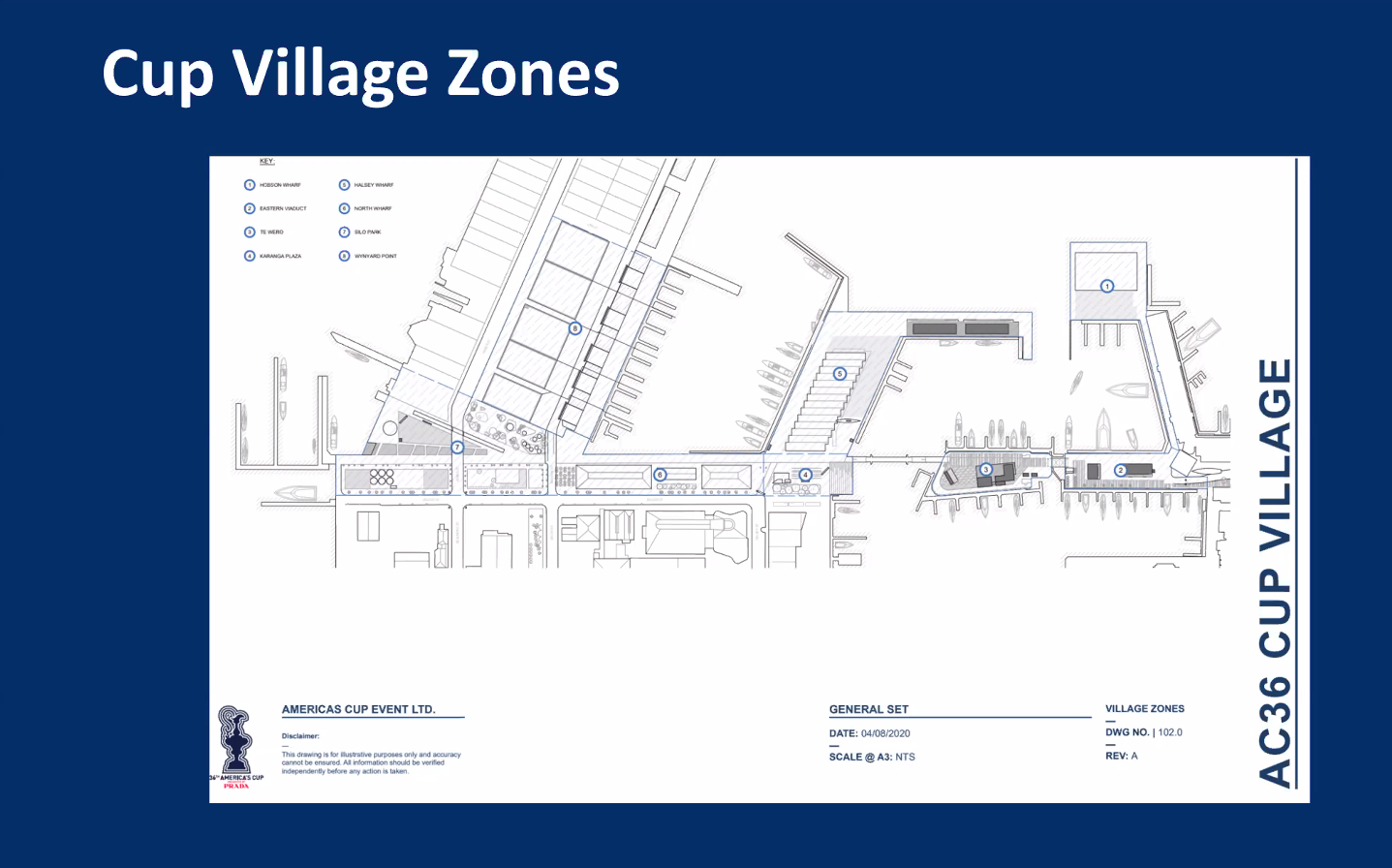 The construction of the America's Cup villages.

Even that relatively small number translates into a loss of $30 million worth of maintenance work to New Zealand, much of which would have been undertaken in the new superyacht servicing facility a few hundred metres away from the America’s Cup bases.

There have been attempts to mitigate the fallout, with the New Zealand Health Department issuing exemptions for repair, refit and refurbishment, but only “a few” vessels have arrived and been allowed entry under this category.

Back in July, Prime Minister Jacinda Arden was asked how New Zealand could host a successful America’s Cup with its borders closed. She responded that the AC was a world-class event and it wasn’t just about visitor numbers.

In terms of a risk matrix, it would seem to make a lot more sense to open the door to a small group of individuals – that is, superyacht owners – who are able to make a huge economic contribution. But the optics of this are murky, given the predictable criticism in some quarters about the America’s Cup being a party for foreign billionaires and their entourages.

It appears the America’s Cup events and atmosphere will only be enjoyed by Kiwi sailing fans and domestic tourists.

Restaurants and other entertainment venues will miss out on the spending by an estimated 30,000 international visitors who were expected to flock to Auckland, justifying business and government capital investment.

The New Zealand government can salvage some barrels of economic value from the wreck of COVID-19, but as Peter Busfield noted, there are only a few weeks to a month for superyacht owners to lodge their applications in order to get the necessary health approvals in time for an early to mid-December arrival.

A preview of things to come in the America's Cup.

Meanwhile, we’ve had a taste of the kind of on-water spectacle the AC75’s promise to deliver – even if we can’t be there in person.

The New York Yacht Club’s Defiant yesterday paced Emirates Team New Zealand’s Te Aihe on Waitemata Harbour in what was described as a perfect 10–12-knot sea breeze. Neither boat enjoyed a clear speed advantage, but the moment provided a welcome counterpoint to all the political posturing over border restrictions and entry requirements.

Let’s hope the locals appreciate what they’re getting – exclusively – in their own backyard.