Pearl 72: Behind the design

Ocean sat down with designer Bill Dixon to chat about the new Pearl 72, which was unveiled at the Cannes Yachting Festival.

It was clear when Ocean interviewed Iain Smallridge, Founder and Managing Director of Pearl Yachts, in August that something was brewing for the Cannes Yachting Festival earlier in September and – as we covered in that interview – the ‘something’ was the new Pearl 72.

Slotting neatly between the 62 and the 80, the 22-metre 72 builds on the elements the company has become known for, including maximising space to create four double cabins without sacrificing the garage or crew accommodation. Further, two of those cabins are now designated as master suites – an impressive feat in a yacht this size, particularly as it doesn’t appear to have impacted the exterior styling, which could so easily have become disproportionately tall or bloated to accommodate the layout.

Pearl Yachts’ longstanding design partner for the naval architecture, exterior styling and general arrangement is the Dixon Yacht Design studio based on the UK’s south coast, and the studio’s principle, Bill Dixon, was at Cannes for the big reveal. As a Champagne cork salute fired somewhere in the background, I borrowed Dixon for a few minutes to probe him about the secrets of the Pearl’s design success.

Designer Bill Dixon at the launch of the Pearl 72 during the 2021 Cannes Yachting Festival. Photography: Charlotte Thomas/Ocean magazine 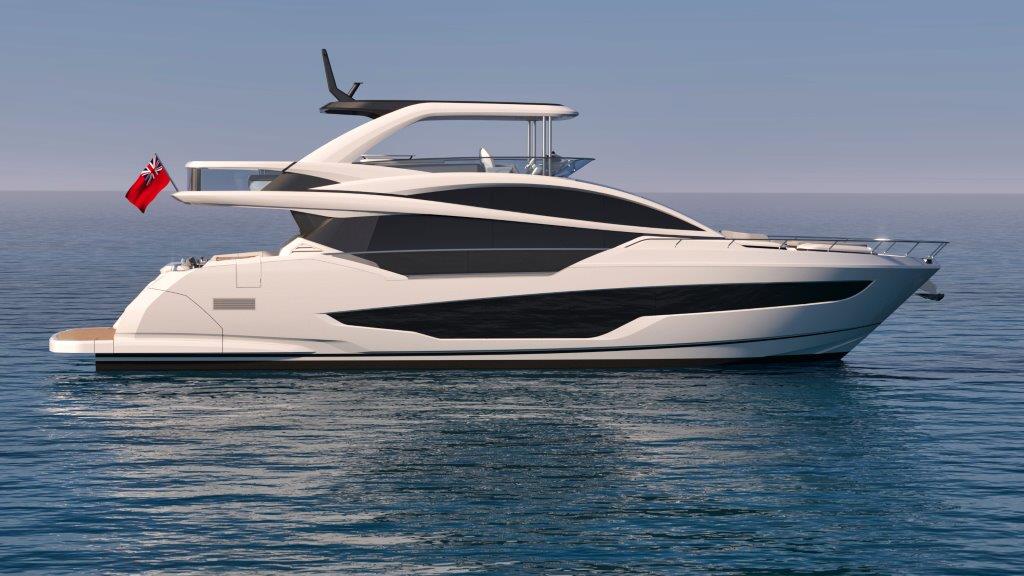 Dixon Yacht Design has evolved the distinctive Pearl exterior to appear even more modern and sleek, matching the advancements made in performance, efficiency and seakeeping through advanced naval architecture. 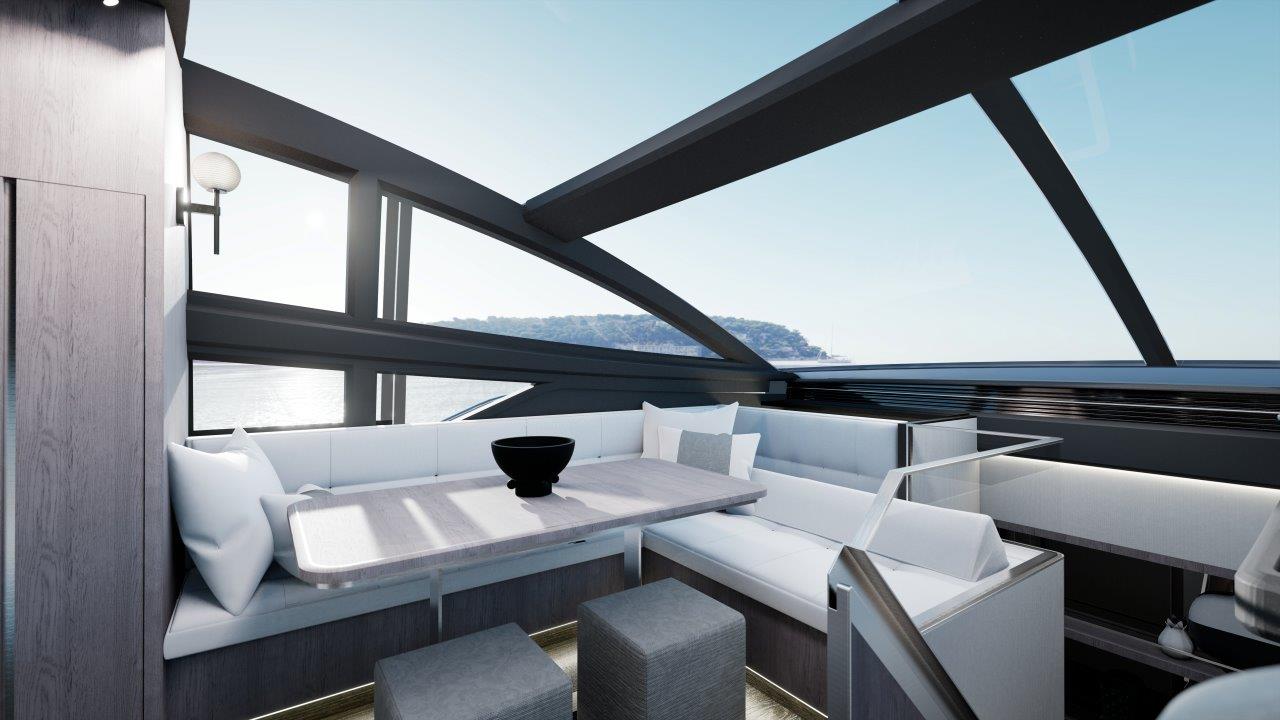 The 72 features Pearl's double windscreen, but the design team also opted for spherical glass over flat glass for much of the glazing. 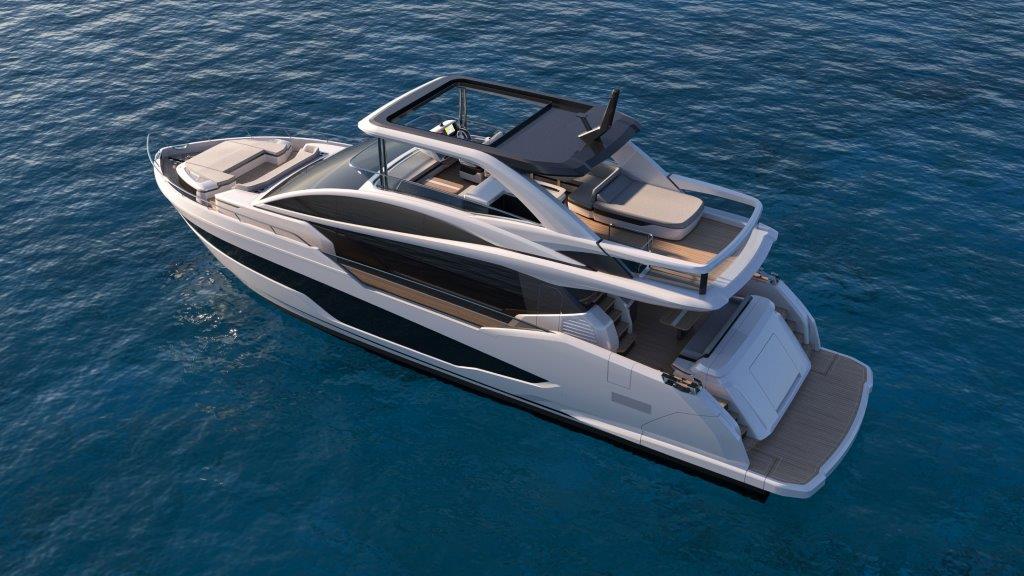 The flybridge is a clear example of the theme of flexibility, which defines the entire Pearl 72. Guests can enjoy the fresh air and flybridge experience under the variable hardtop, which has three settings: full shade, adjustable louvres and full sun. 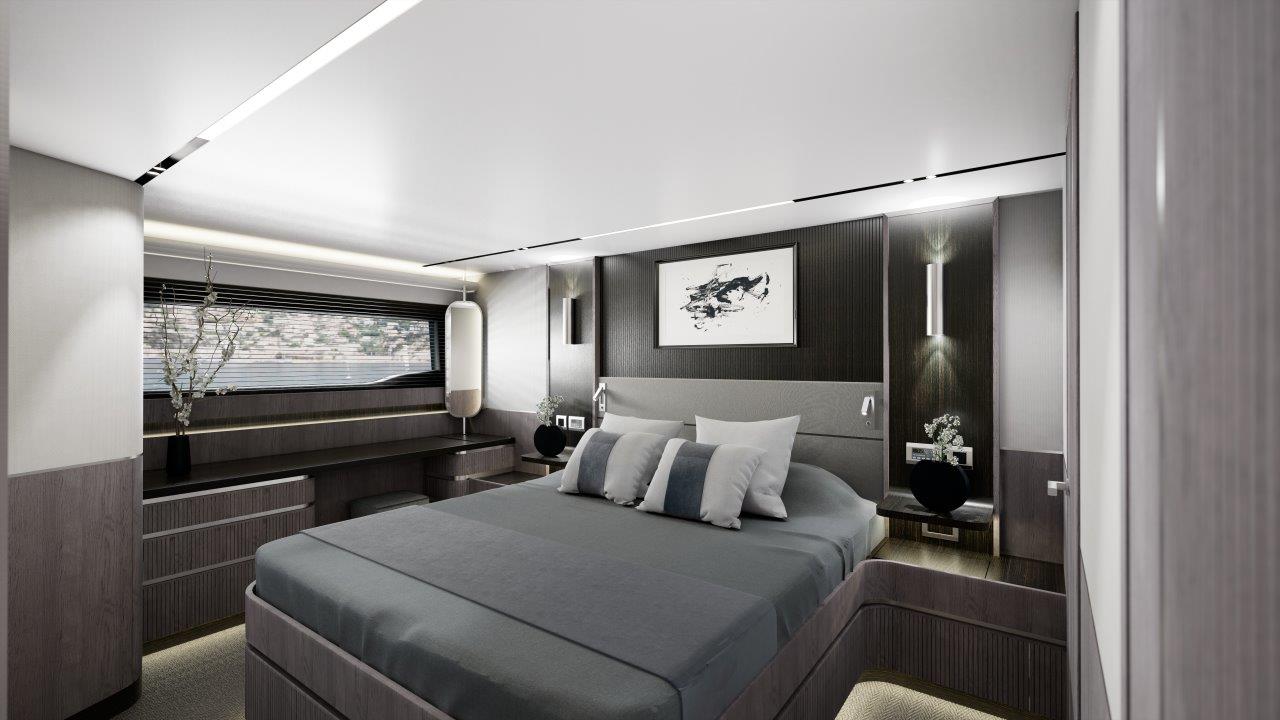 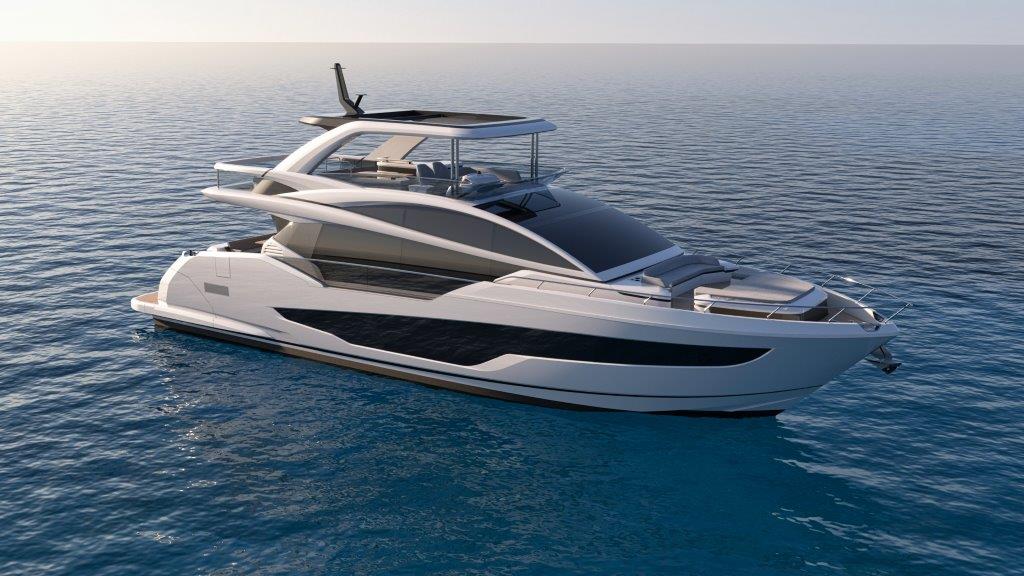 For the layout, the available space has been used to maximum advantage. The flybridge is full length to accommodate unexpected amenities and leave plenty of space for the owner’s choice of layout. The entrance to the saloon is a via an impressive, electrically-operated sliding door. The main saloon is laid out as a lounge with designer sofas along the port side and eye-catching furniture starboard, with an abundance of storage.

“We do things a little differently to some of our competitors,” he offered, “as most of our boats today have their engine rooms pretty far aft – and that’s part of trying to get the rest of the accommodation in. That’s how we create a little bit of extra space, which is always the challenge you’ve got.

“Every hull is unique, to the best of the designer, and is designed specifically for each vessel – and of course there are differences in characteristics in terms of length and beam,” Dixon continued. “This also affects the position of the weight balance as well.”

I asked him whether past experience with this Svengali space act on previous Pearls makes it easier, but clearly Dixon is a man who never rests on his laurels. “I’ve got to make it better,” he replied, simply. “We start off fairly conventionally, and then we ask ‘what about if we did this?’. It takes time to make it work, and this boat is packed with this interior [layout] – we’ve used every space on this boat for the interior.

“It’s a combination of great outside spaces, and then the lifestyle inside,” he continued. “And I think the real thing about this is this semi on-deck master with the bathroom behind the bed. That’s one of the features that’s on the Pearl 95, and we’ve sort of brought that down to this boat.”

It is that constant push to maximise space that has enabled the four-cabin layout, which features two double/twin guest cabins and a full-beam midships master accessed from one flight of stairs in the saloon, and a second, forward master suite accessed via its own set of stairs adjacent to the helm. A crew cabin is also snuck into the layout behind the aft master and forward of the engine room, providing a welcome sound-gap between the mechanical spaces and the guests.

Of course, all this has been achieved while retaining the family DNA, and it’s hard to imagine the prodigious interior, disguised as it is in svelte exterior lines – as Dixon himself described, the 72 has “curves in all the right places”.

“You can see the family similarity,” he told me, “but obviously we’re also trying to subtly evolve the line even though there are certain lines on this boat that we want to have follow through the whole range.

“So actually, on this boat we’ve not gone for flat glass, we’ve gone for spherical glass because we wanted a slightly different reflection – although it’s subtle, it makes a difference to the look of the boat.”

It’s clearly a labour of love to piece together such a complex puzzle, and that takes time – more so even than Smallridge might have realised. “We’ve been through a lot of iterations,” Dixon admitted. “Iain says 18 months but it wasn’t, it was two years or maybe a bit more. The key thing is developing the idea – you have certain ideas and then basically the boat evolves from that. It has to,” he added, “because those are the key things we’re trying to achieve.”

With the 72 now unveiled, it begs the obvious question – what next? “We’re certainly developing the next one,” Dixon teased, “so wait and see. I don’t think we’ll be going smaller…”