Cantiere delle Marche introduces the EXP 42, the first model in a new range of explorer yachts by the Italian yard.

“An explorer yacht isn’t about its shape, it’s about its reliability, its range, its storage capacity and its ability to face any weather condition in comfort and safety,” says Vasco Buonpensiere, Sales and Marketing Director of Cantiere delle Marche (CdM).

“We build cool explorer yachts, period. With an explorer yacht and a contemporary design, you have the best of both worlds – you can cruise around the world comfortably, safely and in style,” continues Buonpensiere.

With the Darwin Class still playing the war-horse role – as well as covering the spectrum of options in the full custom segment with the launch of K42 Audace and Crowbridge – with more fully custom explorer yachts in the pipeline, CdM came up with a new proposition in the semi-custom market to meet the vast and demanding needs and expectations of clients. 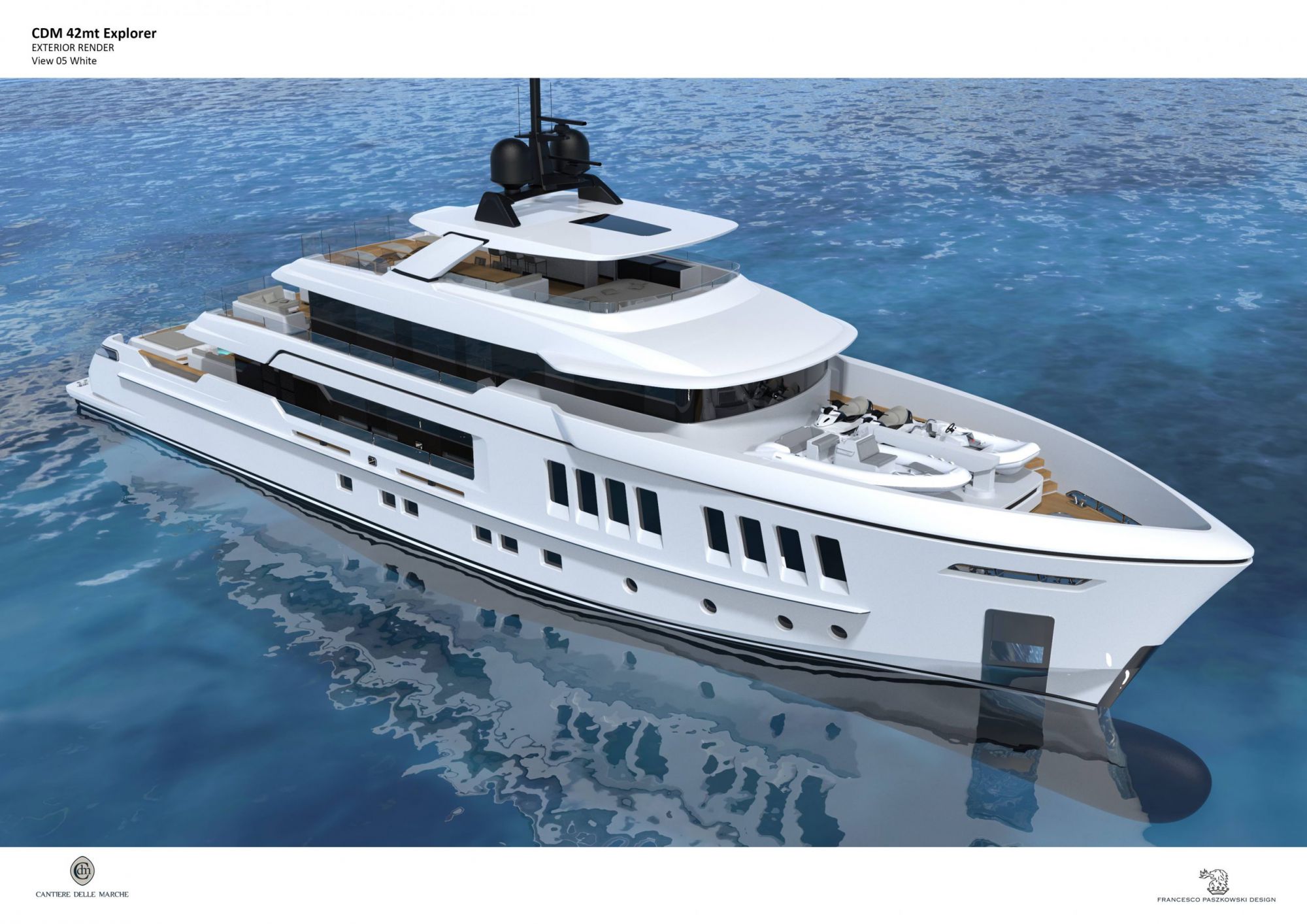 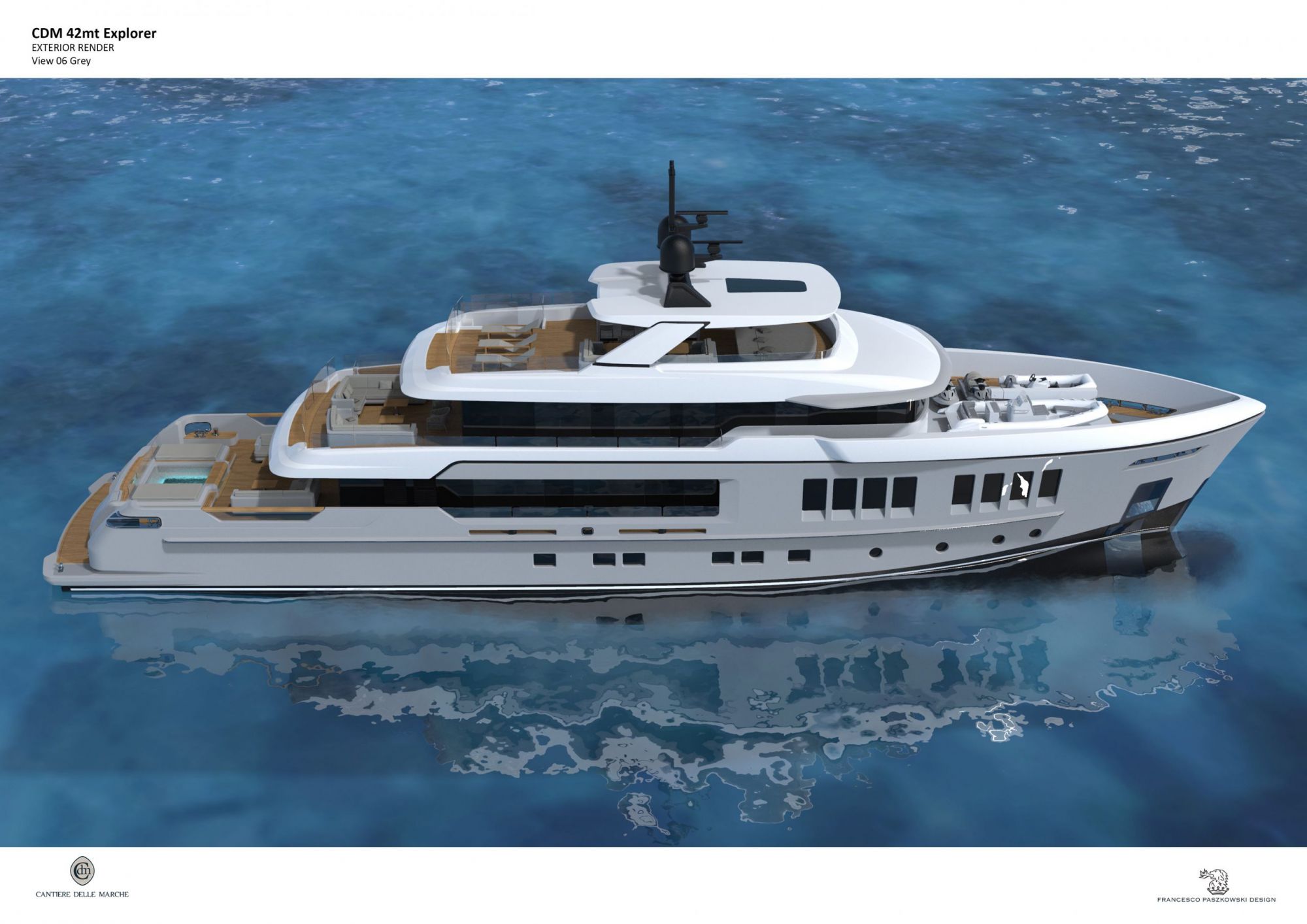 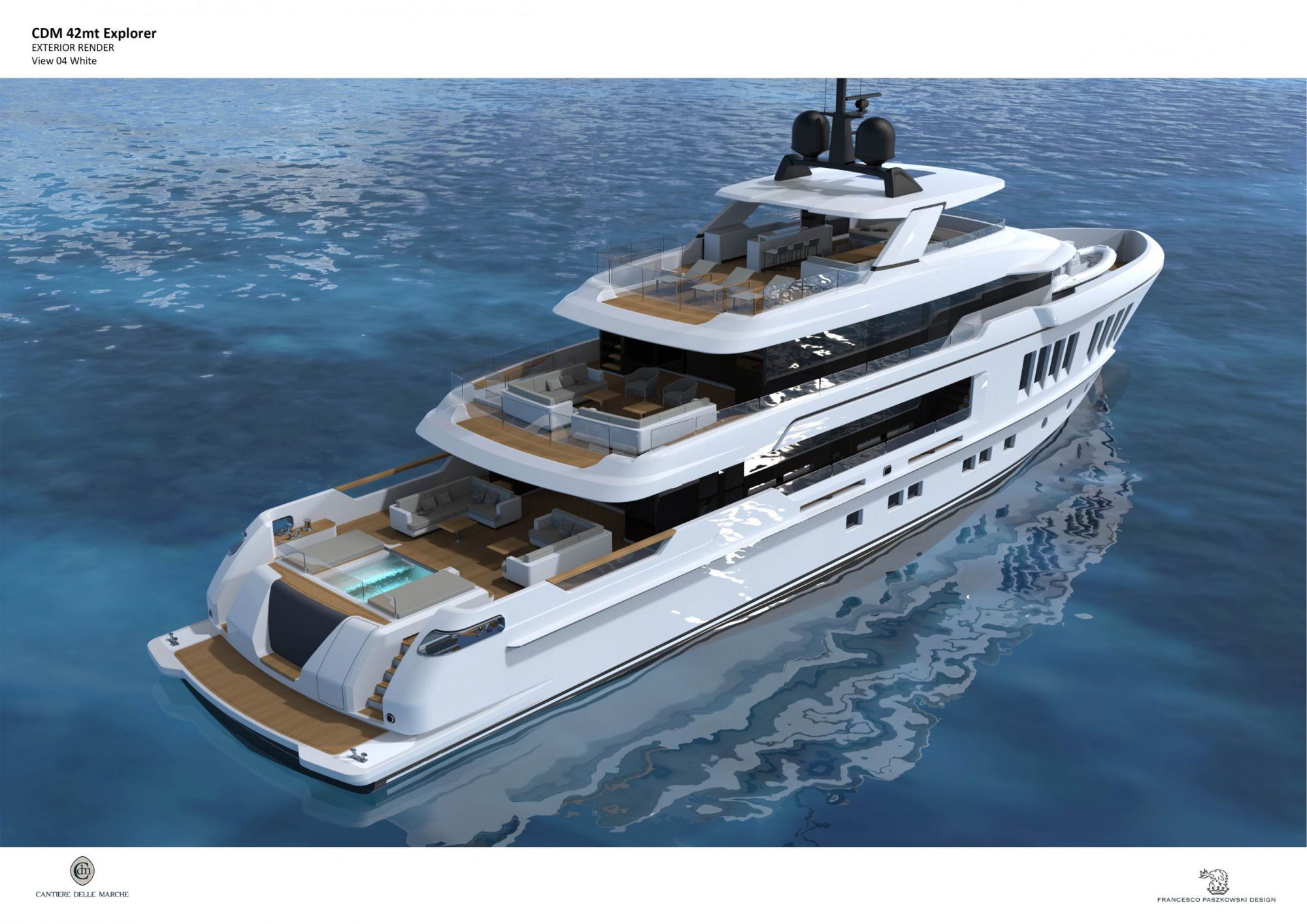 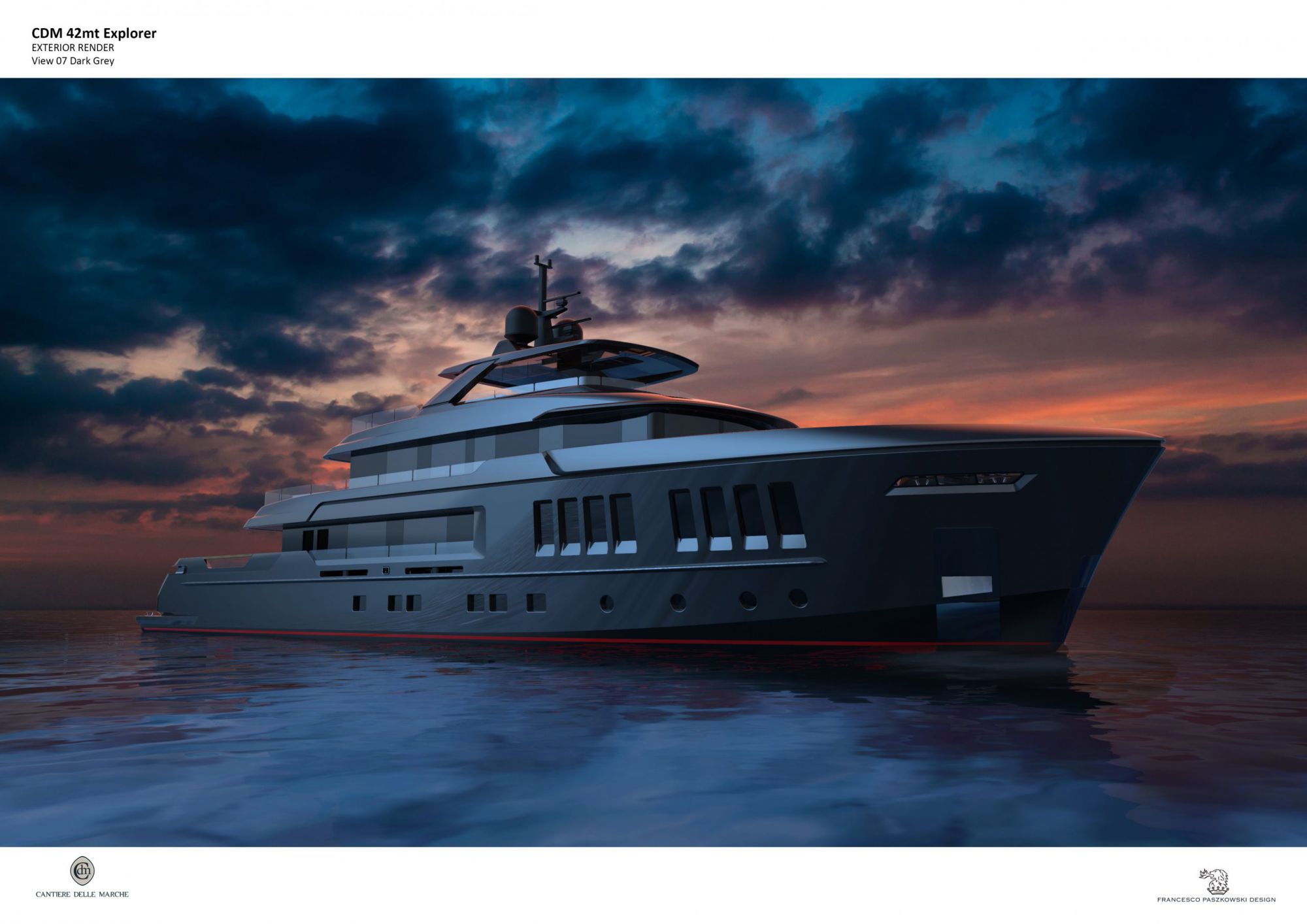 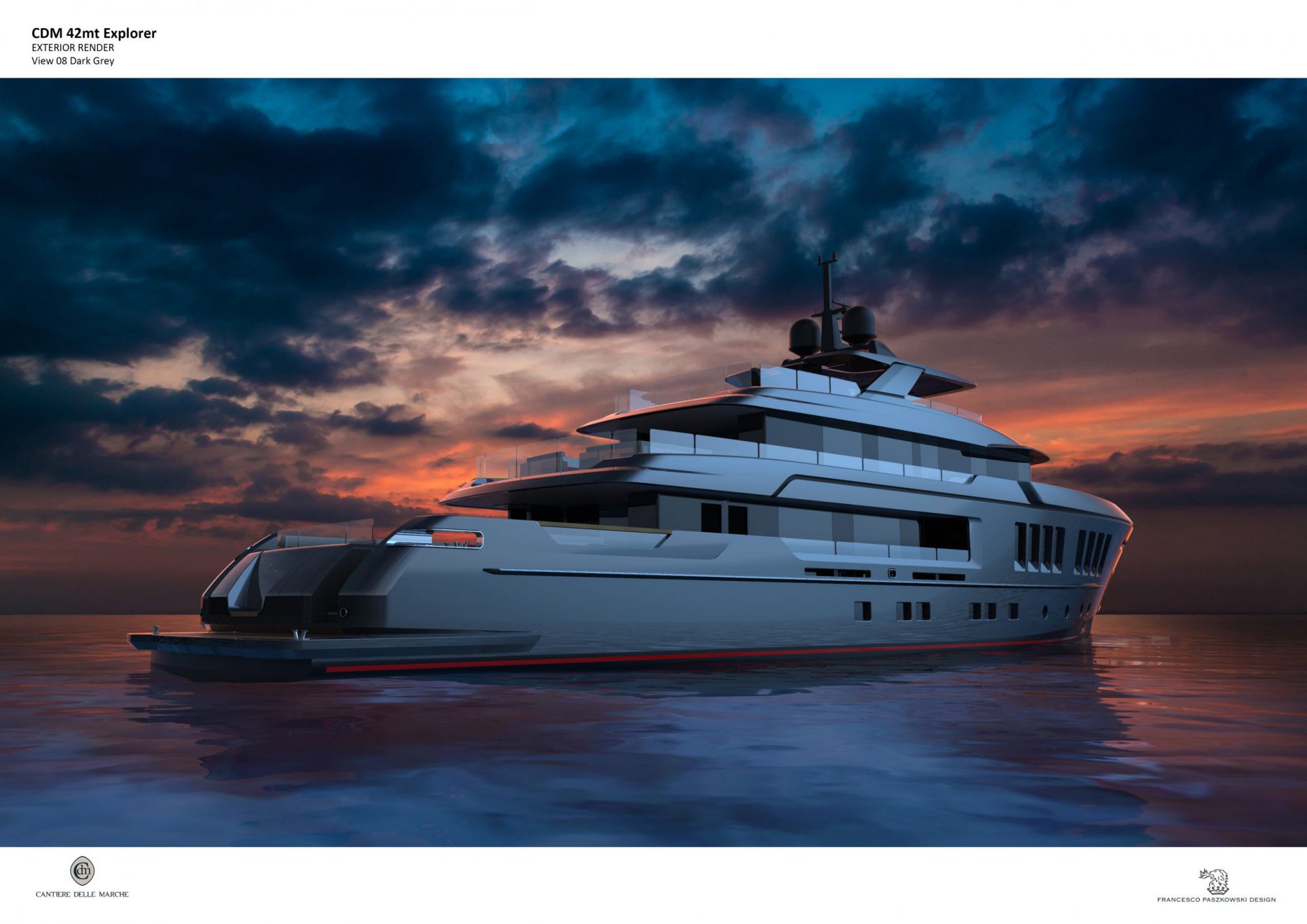 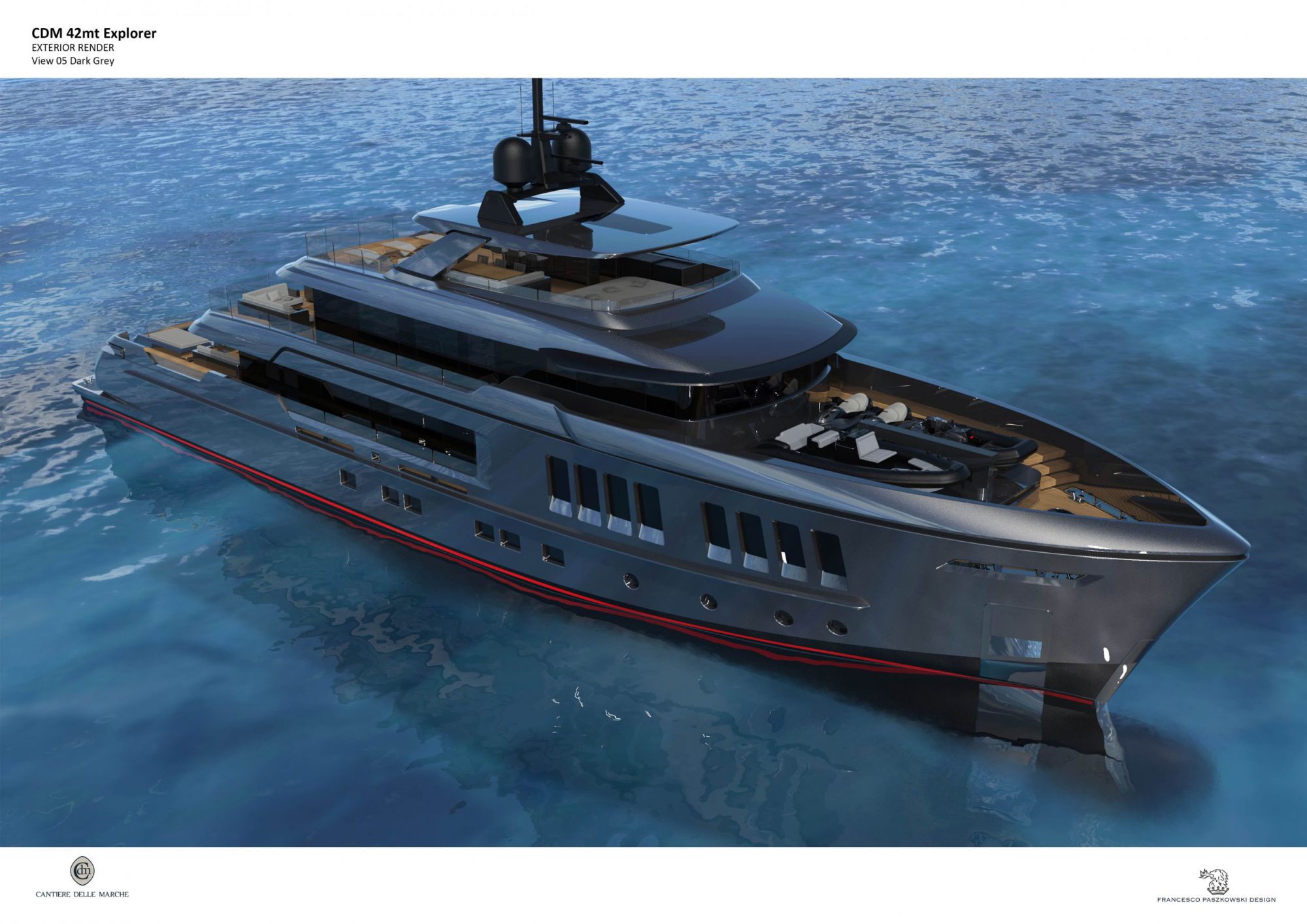 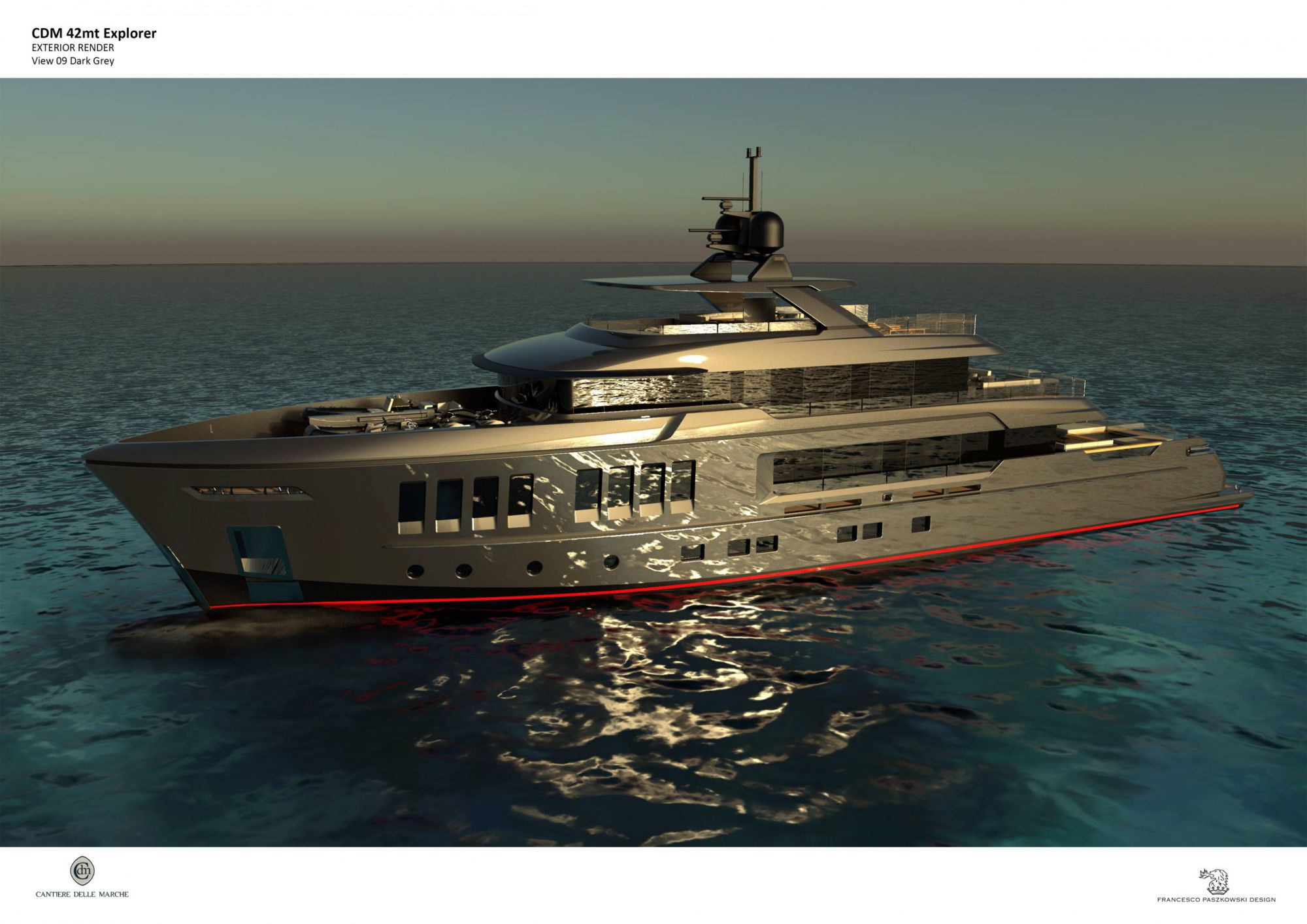 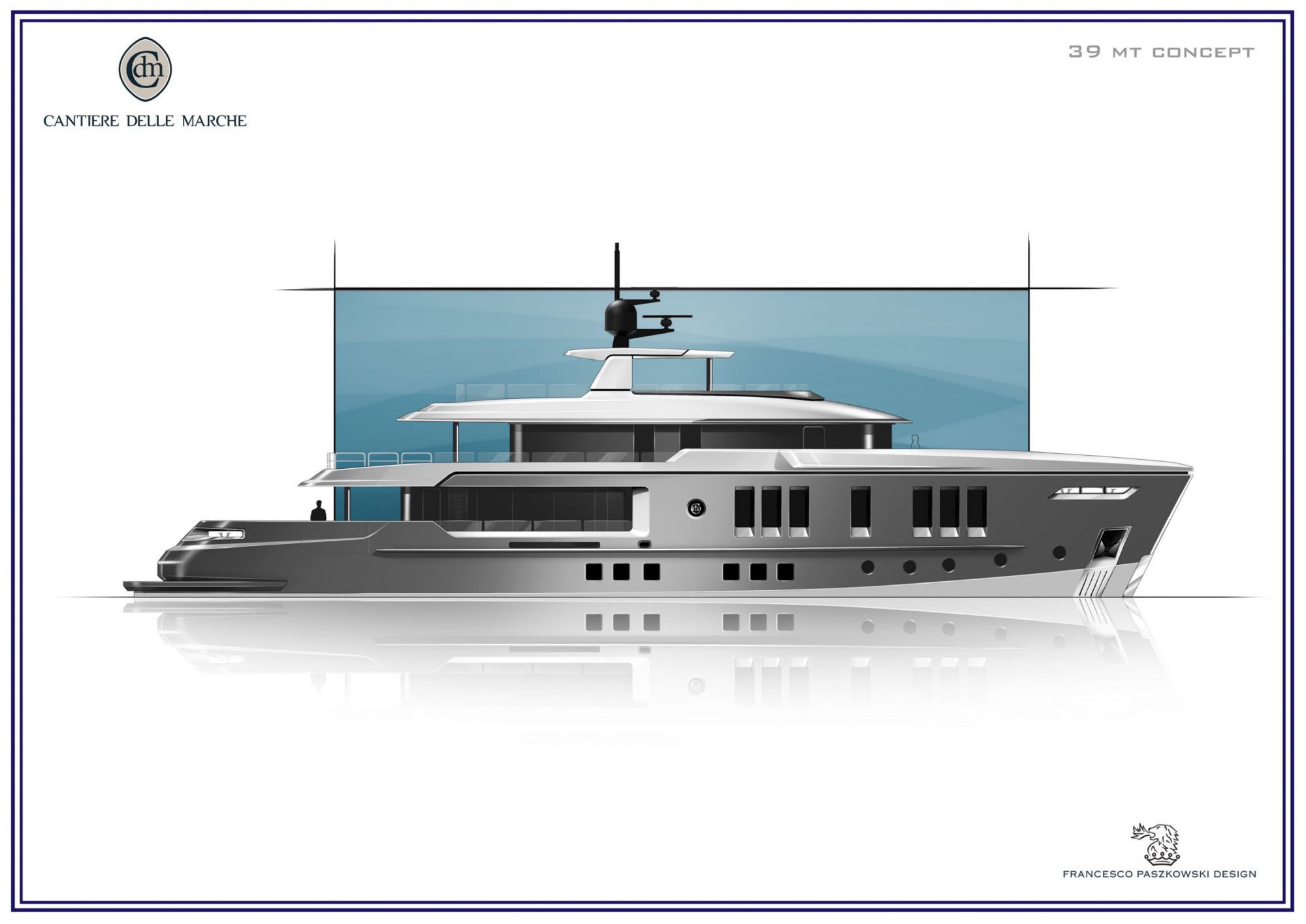 This is the case with the Flexplorer range by Hydro Tec (the first is about to be launched) and the MG line by Francesco Paszkowski, of which three yachts have already been sold.

CdM’s decision to further extend and diversify its product range has resulted in a new semi-custom range devised with Francesco Paszkowski. The new EXP line will be comprised of models from 310–499 tonnes.

The first model announced by the yard is the EXP 42. An imposing, bold explorer yacht, the EXP 42 strikes a distinctive figure. With a robust displacement steel hull and light aluminium superstructure, the EXP 42 will have a displacement of around 460 tonnes.

Twin Caterpillar C32 Acert and 60,000-litre fuel tanks allow a top speed of 14 knots while a 5,000-nautical-mile range means she is able to sail far and wide with no need to stop for supplies.

A pure explorer vessel, the EXP 42 has been conceptualised to house every imaginable guest feature you would expect from a luxury yacht.

Paszkowski has designed grand exterior deck spaces so guests can relax in maximum privacy while at the same time creating the feeling of openness and uninterrupted living spaces.

The interior layout can be highly customised according to each owner’s needs and habits. Nevertheless, CdM will offer a few options including a six guest cabin version, purposely designed for clients with charter in mind. In this version (GA 1), all guest suites are basically the same size. Four VIP cabins are located on the main deck while the remaining two guest suites are on the lower deck.

A more traditional layout (GA 2) features a large owner apartment on the main deck forward and four guest suites on the lower deck. The interior layout is proposed in different congregations: with saloon and dining area located on the main deck or with a smaller salon on the main deck and the dining area on the upper deck. In addition to interior versatility, the owner who prefers larger open deck areas can opt for a version with extended deck overhangs.

In the six guest cabin version, there is an option for a large, functional galley on the same level as the immense crew quarters – all of this without compromising anything as far as the VIP areas are concerned. The more traditional layout has the galley located on the main deck.

This is a yacht designed to be used often and for long spans of time away from shore, and as such, storage is indeed everywhere on board.

Among the EXP 42’s key features is an extremely large cockpit with fold-down balconies and an upper deck saloon that best shows off the indoor/outdoor ethos of this project.

The upper salon is a bright and airy veranda wrapped in glass surfaces to enhance the continuity between the outdoors and the comfortable interiors, no matter the time of year.