Maritimo has partnered with France’s avant-garde champagne house, Maison Mumm, at this year’s event and the new motor yacht forms the visual heart of Mumm’s exclusive ‘Yacht Club’ themed marquee in the prestigious Birdcage at Flemington.

The S59 Maritimo has been unveiled and officially ‘christened’ the “Mumm Grand Cordon” at Flemington this morning.

It is the first time that a luxury motor yacht has been included in the promotional theming of one of the marquees in the prestigious Birdcage.

Maritimo’s CEO, Garth Corbitt, said the opportunity to be involved in the Melbourne Cup Carnival in such a way was a once in a lifetime occurrence and Maritimo was delighted to be partnering with Mumm and the Victorian Racing Club on this year’s spring carnival. 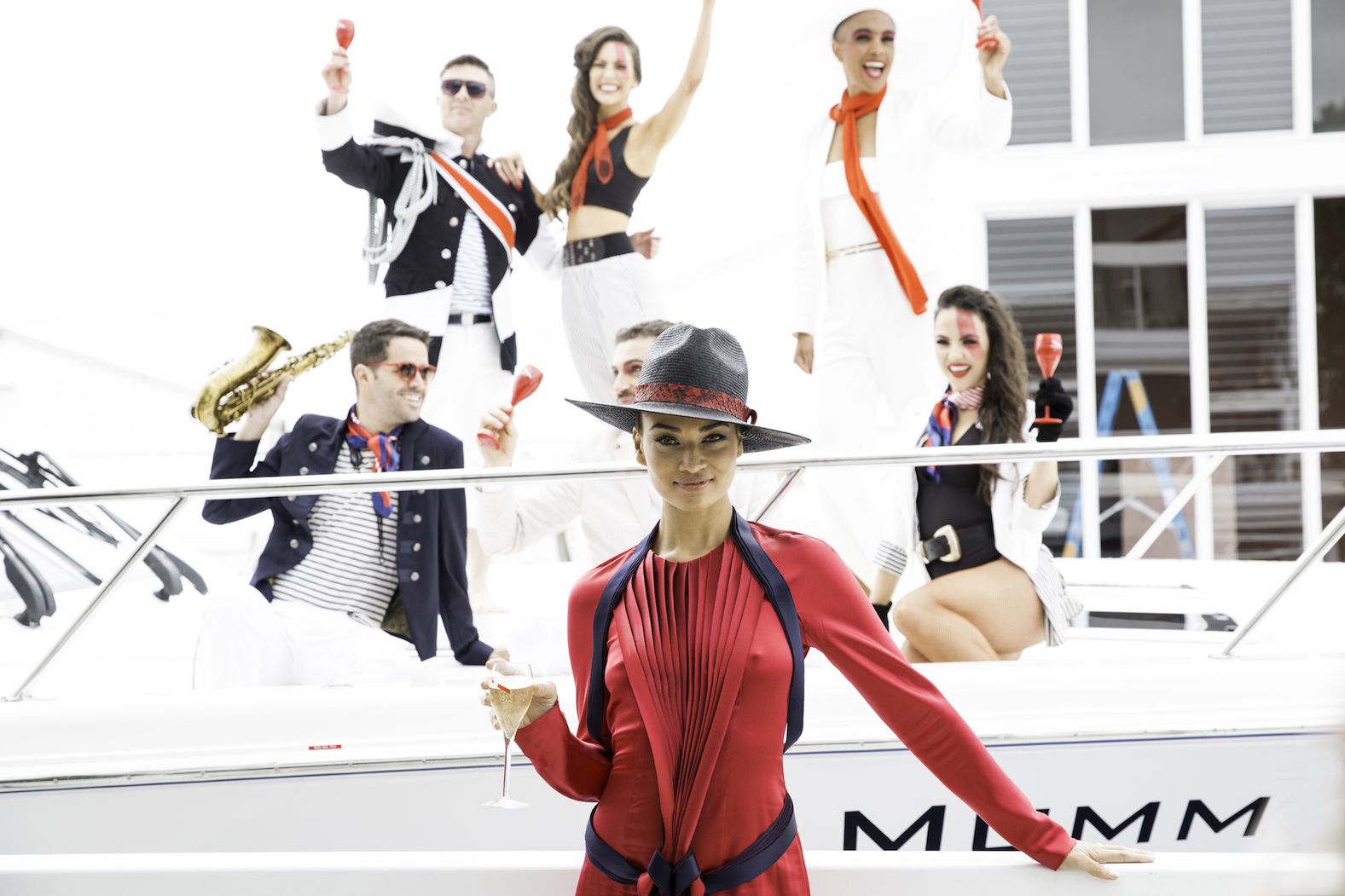 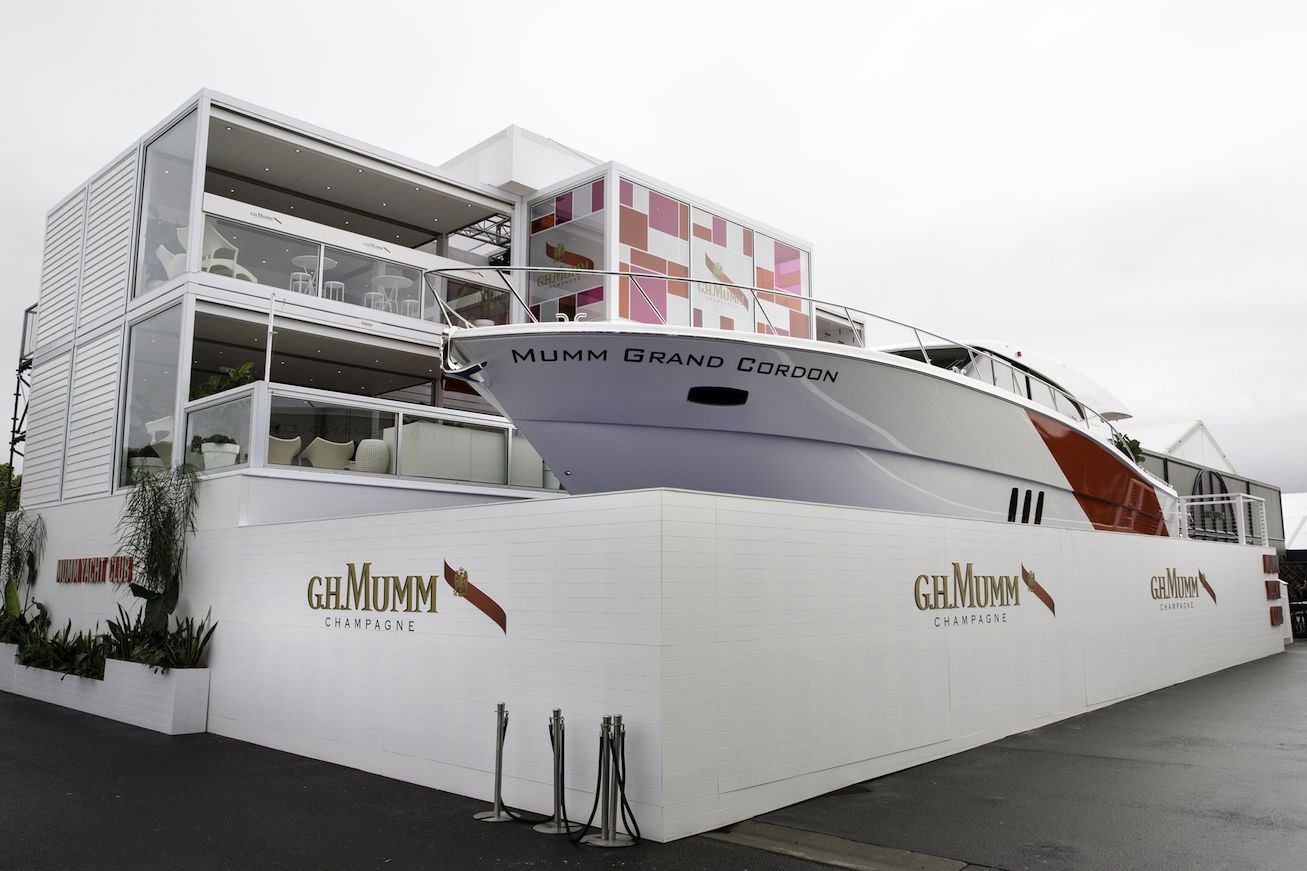 S59 Maritimo has been 'christened’ the “Mumm Grand Cordon” 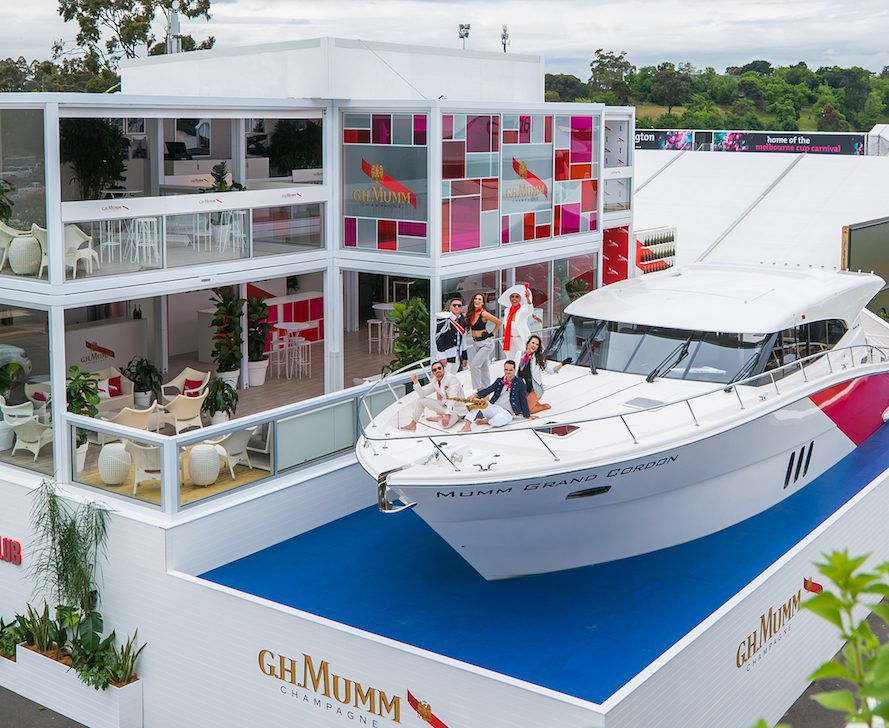 The Mumm dancers are excited for the Melbourne Cup

“We have been working alongside Mumm on a number of events in recent times and this promotion, which is our biggest with them, is the pinnacle of those events,” he said.

“It is not every day that you get to see a magnificent luxury cruiser of this size displayed in an environment such as Flemington and particularly when the eyes of the world will be on Melbourne for the Cup and the overall spring racing carnival.

” Maison Mumm is the perfect partner for Maritimo – as the official Champagne partner for Melbourne Cup Carnival, the brand is kicking off summer in the ultimate way, the calibre of celebrity and VIP guests who will visit the Mumm marquee during the Carnival is extremely high, including model and Mumm ambassador Shanina Shaik, comedian and radio host Em  Rusciano, and Olympic swimmers Michael Klim, Ian Thorpe and James Magnussen.”

Corbitt said the Birdcage marquee exposure would see Maritimo’s brand and product promoted globally at the same time that the company was staging its largest ever international display at the Fort Lauderdale International Boat Show.

“We are gaining increased brand awareness internationally and to be involved in two such prestigious events on opposite sides of the world at the same time is a clear demonstration of our global focus and strategy,” he said.

E! News will be broadcasting from the cockpit of the yacht during the Cup carnival where they will interview celebrity guests and VIPs, while entertainers will perform on the bow of the vessel during each race day.

Maritimo’s Shipping and International Service and Warranty Manager, Ross Willaton was charged with the responsibility of meeting all the transportation challenges and overseeing the vessel’s delivery to Flemington.

“We firstly took the boat to Newcastle where it was shrink wrapped prepared for road transport to Melbourne and then put onto a truck,” he said.

“We had to get the boat to a maximum height of 5.1 metres when on the quad trailer and that involved taking the shafts, rudders and props off and then also all the navigation gear, electronics and lights on the cabin top.

“It was then taken by road to Melbourne with pilot escorts where on arrival it was met by Energex pilots and other officials who controlled its journey to Flemington. We were just legal in terms of the tramlines.

“Once we got it to Flemington because of its size and the location of the Mumm marquee within the Birdcage we were virtually the first piece of major infrastructure to be installed and that required the use of a 250 tonne crane.

“Once we were put in position we had to shrink wrap it again after damage on the road trip from Newcastle, and then the rest of the marquee was constructed around the boat.”

Corbitt said the owner of the S59 had agreed to allow the vessel to be used and would be attending the Cup carnival on several occasions as a VIP guest of Maritimo and Maison Mumm.

The vessel and the yacht club themed marquee were revealed to media for the first time this morning.