Gold Coast City Marina & Shipyard (GCCM) has made global waves in the international marine world this month becoming the first commercial marina and shipyard in the Asia Pacific region to be awarded the highly coveted 5 Gold Anchors Global Marine Accreditation.

The iconic GCCM facility, a vital part of the 250-hectare Gold Coast Marine Precinct, is the largest refit and repair yard in the Southern Hemisphere attracting yachts from around the globe.  Its capacity caters for up to 50 superyachts at any one time with service capability extending to all aspects of marine refit, maintenance and construction for vessels of all shapes and size thanks to the 70 on-site marine related businesses operating there and employing in excess of 600 marine contractors.

The Gold Anchor Global Accreditation Scheme is a joint venture initiative of The Yacht Harbours Association (TYHA) together with the Marina Industries Association (MIA) which has seen the development of a rigorous audit programme to consistently benchmark marina quality around the world based on customer service and on-site facilities. 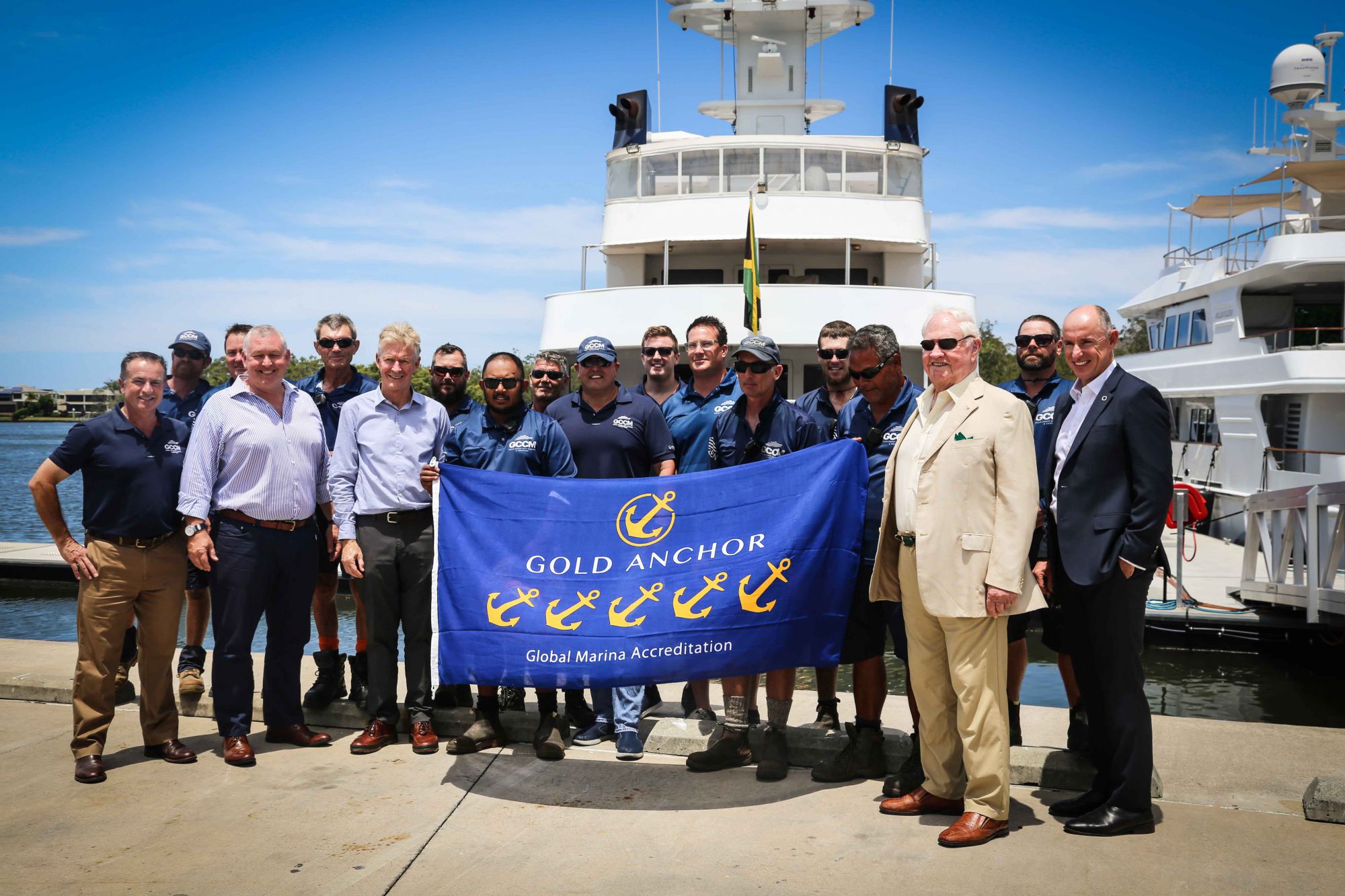 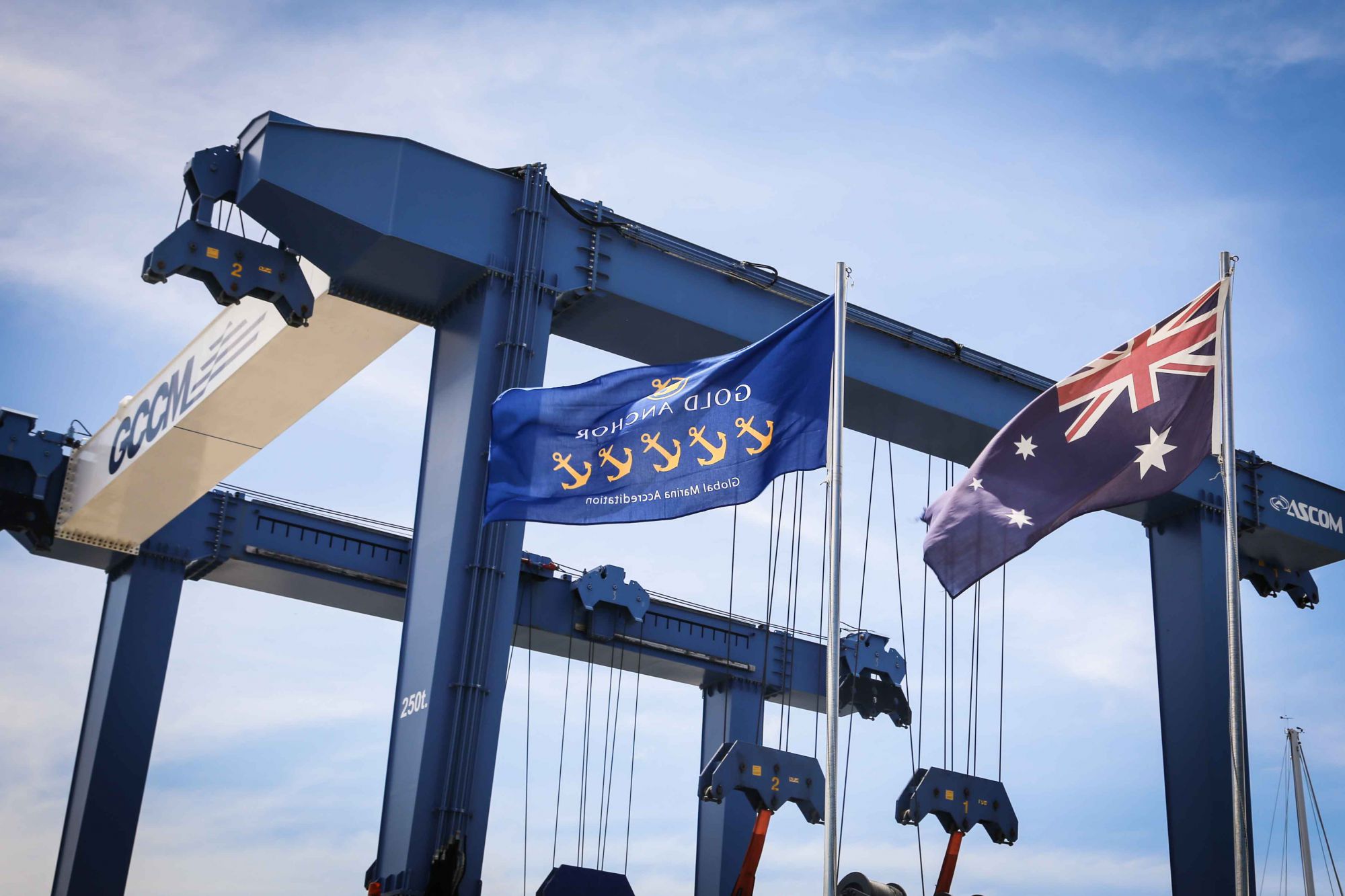 Trenton Gay, CEO of GCCM says becoming the first shipyard in the Asia Pacific to be awarded 5 Gold Anchor Global Marina Accreditation is an enormous feat thanks to a collaborative team effort across the entire facility.

“This award is testament to our continual improvements.  It confirms our commitment to first-class service and reaffirms our focus on maintaining a truly world-class shipyard and marine team,” Mr Gay said.

“The broader picture for Australia’s marine industry is that this is international recognition and a spotlight on Australia as the world’s next superyacht hotspot because we offer best-practice marine capabilities and facilities coupled with amazing tourism experiences,” he said.

“While GCCM is the first commercial grade marina and shipyard to receive five anchors, we’re joining an outstanding group of Queensland recreational marina facilities including Abell Point Marina, Sanctuary Cove and Southport Yacht Club who now all boast the prestigious five anchor accreditation.  This is Queensland showing the world that we are an international class marine destination.

“Our GCCM facilities are second to none with the highest concentration of marine trades anywhere in Australia. We continually strive to evolve and improve everything that we do and our latest plans for 2018 include a dedicated crew lounge, increased height refit bays, a specialised sandblasting facility and a multi-storey Marine Innovation Hub purposefully designed to grow, nurture and promote the future stars of the Australian marine industry.”

The marina and shipyard already boasts a hardstand that is over 50,000 square metres and proposals for future improvements and expansion of the current facilities also include the future development of GCCM Stage 2 on an adjacent 20 hectare site which will more than double the current capabilities on offer.

Colin Bransgrove, Executive Officer of the Marina Industries Association (MIA) said GCCM’s accreditation had been decided based on an extensive audit process including a rigorous onsite audit, mystery shopping exercises and quantitative and qualitative customer research.

“Gold Coast City Marina impressed the independent assessor with its strong commitment to customer service; its management systems and its commitment to continual improvement of its facilities and services,’ Mr Bransgrove said.

In 2017, the trailblazing GCCM were behind the successful inaugural Australian Superyacht Rendezvous initiative aimed at attracting a greater share of the global superyacht fleet to Australian waters.

Through industry collaboration, government lobbying and widespread national and international promotion, the event played a key role in influencing legislative change that saw the Gold Coast become a designated customs and immigration clearance point – a much needed change for increasing the appeal of the region to superyachts.

The 2018 Australian Superyacht Rendezvous is being staged on 20 and 21 April to coincide with the conclusion of the Commonwealth Games.

Mr Gay said the new customs clearance was an important accessibility milestone in the lead up to the Games where superyachts would be visiting the region on mass.

“Later this week we have arriving a 190-foot superyacht from Fort Lauderdale for an extensive four month ‘on-water’ refit project,” Mr Gay said.

“These superyachts choose GCCM to take advantage of our extensive facilities and our incredible team of marine trades operating here on site.  We also have eight purpose-built superyacht refit sheds and a dedicated superyacht work basin with vehicle access, plus a 250 tonne and 50 tonne travel lift on-site,” he said.

Gold Coast City Marina & Shipyard was the first facility in Australia to adopt ‘marine clustering’ whereby world-class craftsmen and professionals are on hand for every marine repair, maintenance and refit requirement.