Two maisons are co-signing a pair of watch creations, whose DNA blends the main characteristics of each design.

Moser & Cie. and MB&F are both independent, human-scale Swiss companies. They are run by two passionate personalities, longstanding acquaintances who both appreciate and respect each other on both a personal and professional level.

The brands have in fact been working together for more than ten years, with Precision Engineering AG – a sister company of H. Moser & Cie. – notably supplying MB&F’s balance springs. It is therefore not surprising that MB&F asked Edouard Meylan to take part as a “friend” to help create a Performance Art Piece.

Maximilian Büsser says: “When I called Edouard to tell him that I wanted to collaborate on a creation, I mentioned that I really liked the double balance-spring, the Moser fumé dials and the Concept watch series.

“Edouard immediately told me that he would let me borrow these features, but on condition that he could also reinterpret one of my machines. After an initial moment of surprise, I gave it some thought.

“Being 50% Indian and 50% Swiss, I am firmly convinced that mixing DNA creates interesting results, so why not try the experiment in watchmaking? I therefore agreed and suggested the FlyingT model, which is particularly dear to my heart.” 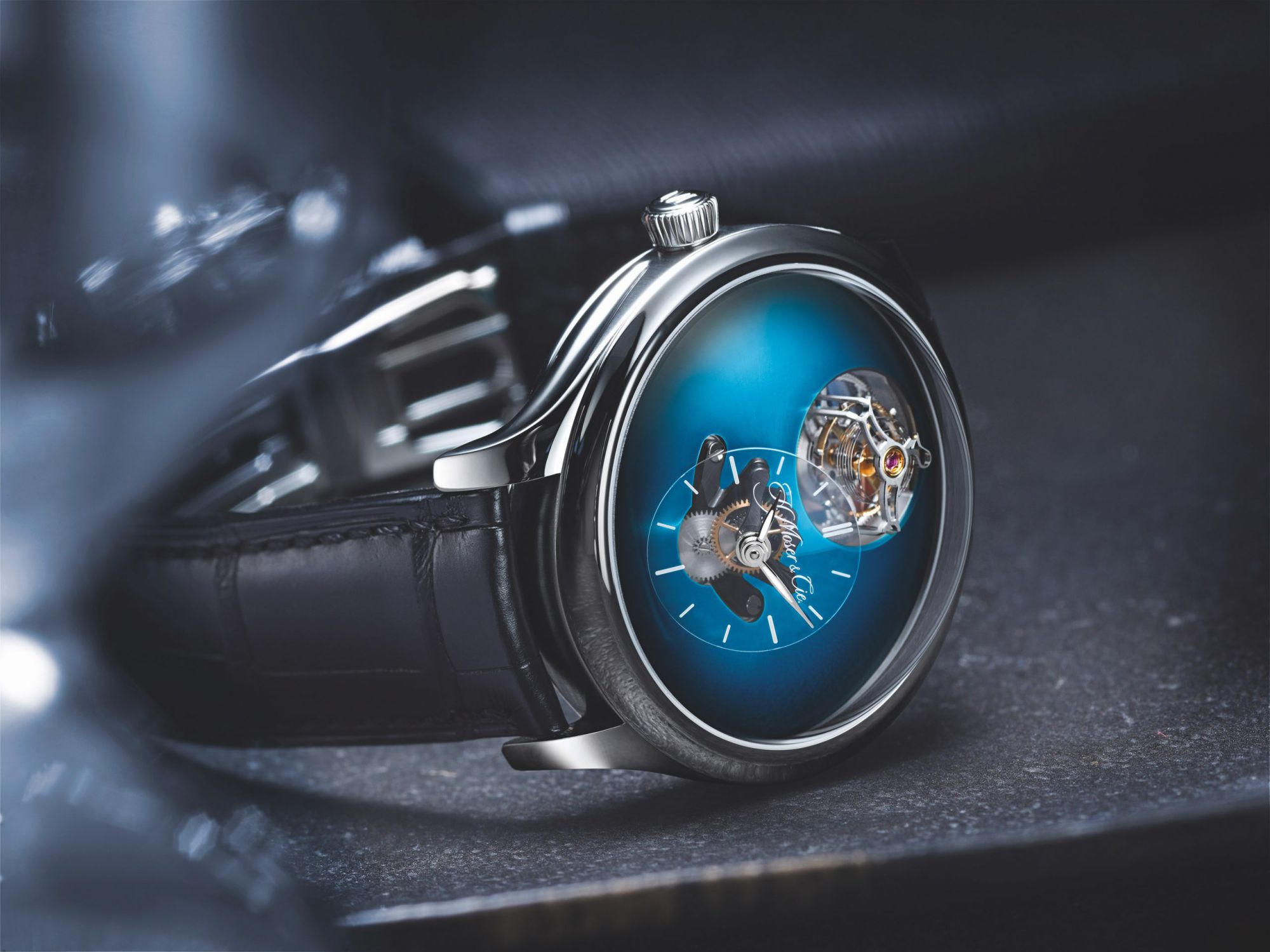 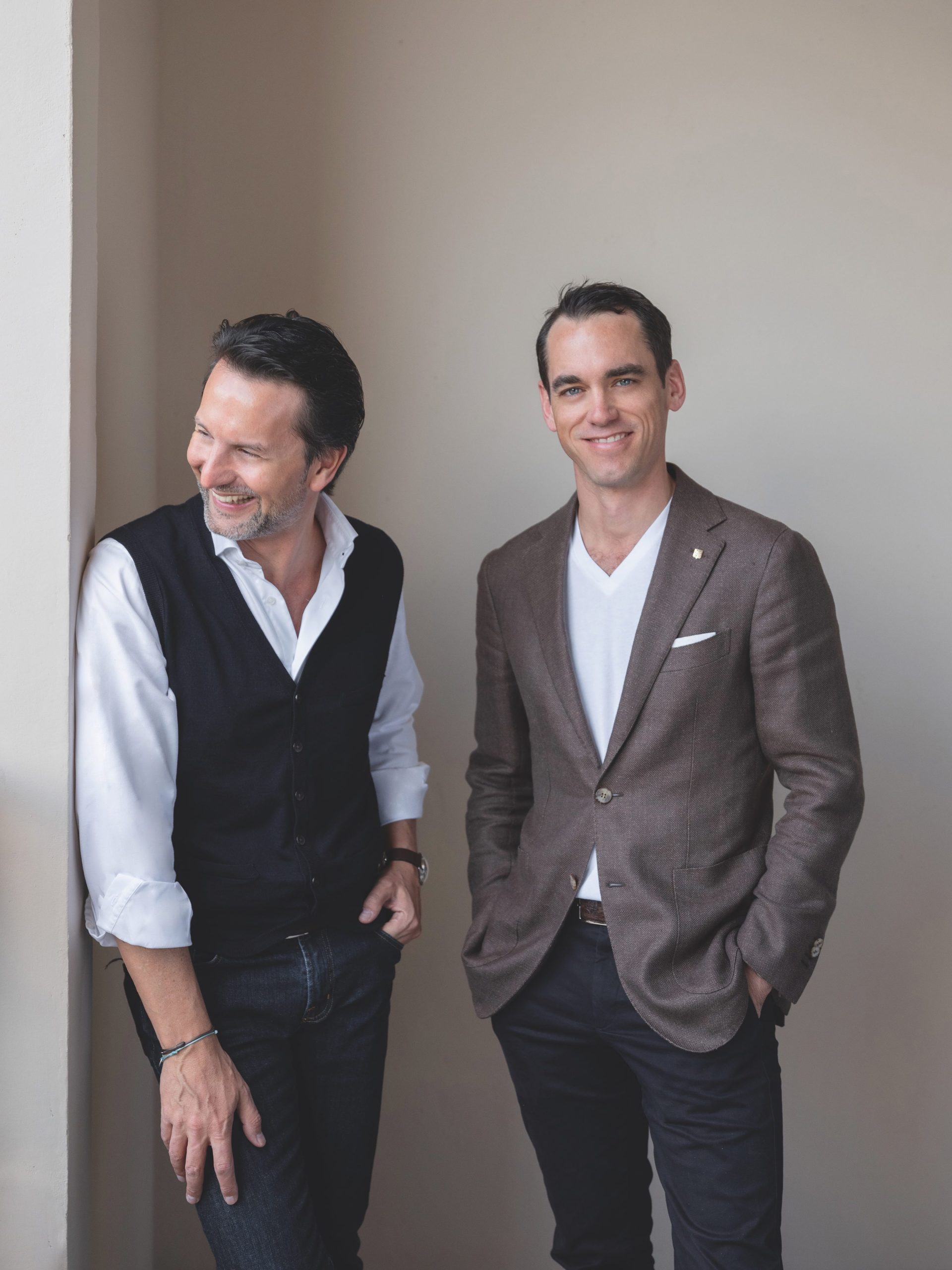 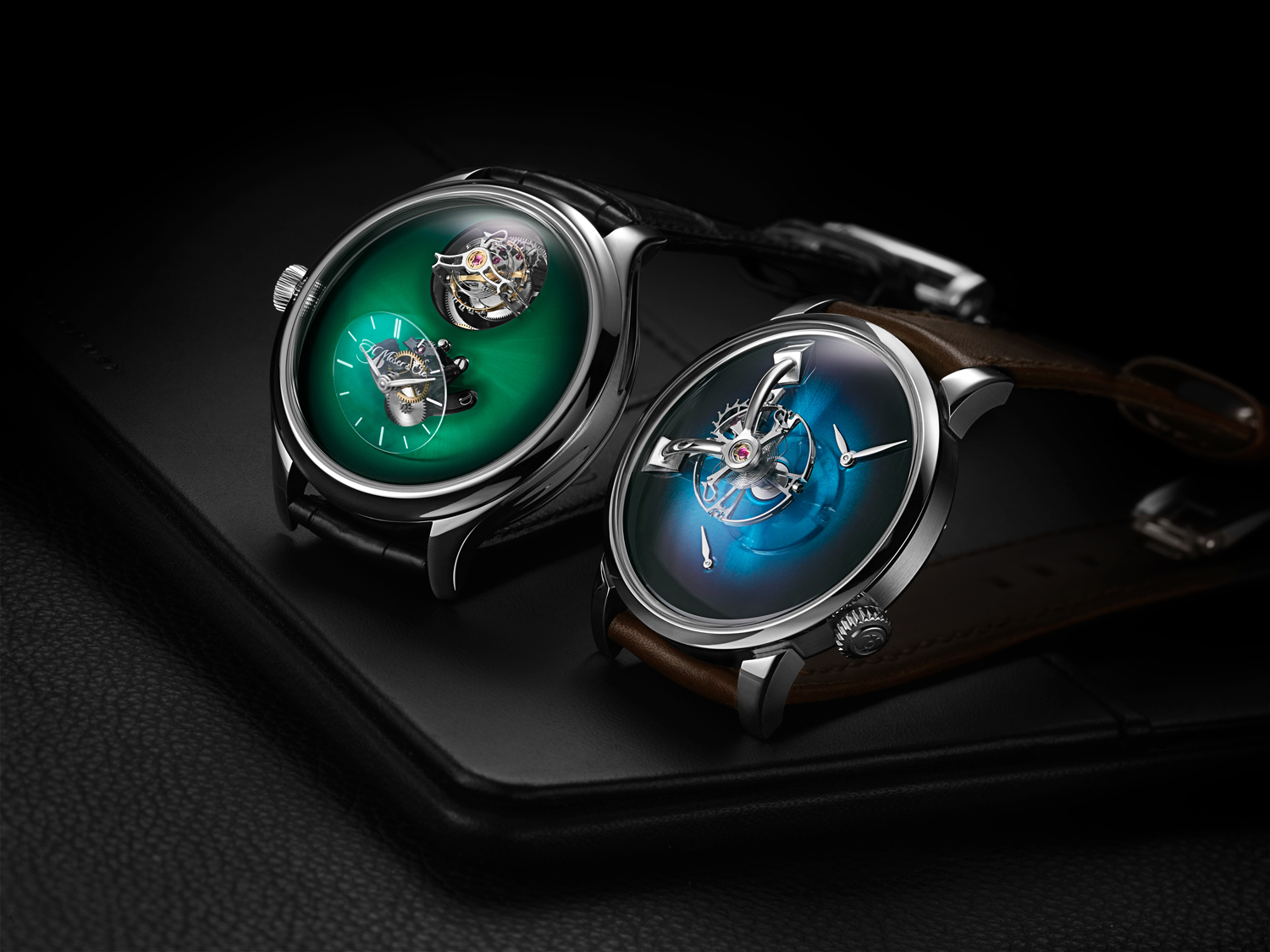 In a spirit of sharing and openness, while cultivating the notion of strength in unity, H. Moser & Cie. and MB&F have thus jointly created two models, available in several versions and issued in 15-piece limited series.

The Legacy Machine 101 distils the very quintessence of mechanical watchmaking: the balance wheel, the power reserve and the passing of time. It is therefore no coincidence that MB&F has chosen to revisit this model – one of the purest and “simplest” in its collection – since it is indeed minimalism that guided the creation of the LM101 MB&F x H. Moser model.

Like H. Moser & Cie. and the back-to-basics approach embodied in its Concept watch series, MB&F has chosen to remove its logo and return to its roots and indeed to the very origins of horology, when only the movements were signed.

In the same understated spirit, it has abandoned the floating domed subdials to display the hours and minutes as well as the 45-hour power reserve by means of hands placed directly on the main dial.

The fumé dials borrowed from H. Moser & Cie. can thus be expressed in complete freedom, also enhanced by a refined bezel. Four fumé dials have been chosen for the LM101 MB&F x H. Moser: Red fumé, Cosmic Green fumé, Aqua Blue fumé and, of course, the famous Funky Blue fumé. Topped with a domed sapphire crystal, the case is made of steel, for only the third time in the history of MB&F.

The mesmerising large suspended balance wheel continues to take centre stage, albeit completely redesigned on the LM101 MB&F x H. Moser in order to highlight the beauty of the fumé dials. This beating heart, which represents the quintessence of watchmaking in the eyes of Maximilian Büsser, has been fitted with a double balance spring produced by Precision Engineering AG.

Thanks to this pair of matching balance springs, the displacement of the point of gravity undergone by each spring as it expands is corrected, significantly improving precision and isochronism in a continuous quest for perfection. In addition, the paired balance springs also reduce the friction effect normally encountered with a single balance spring, resulting in optimised isochronism. Through the case back, the curved sapphire crystal reveals the ‘engine’ driving this timepiece.

Unlike the base movement of the Legacy Machine 101, of which the finishes were determined by co-creator Kari Voutilainen, the aesthetics of the calibre that powers the LM101 MB&F x H. Moser is more contemporary, with a subtle NAC treatment to enhance its beauty. 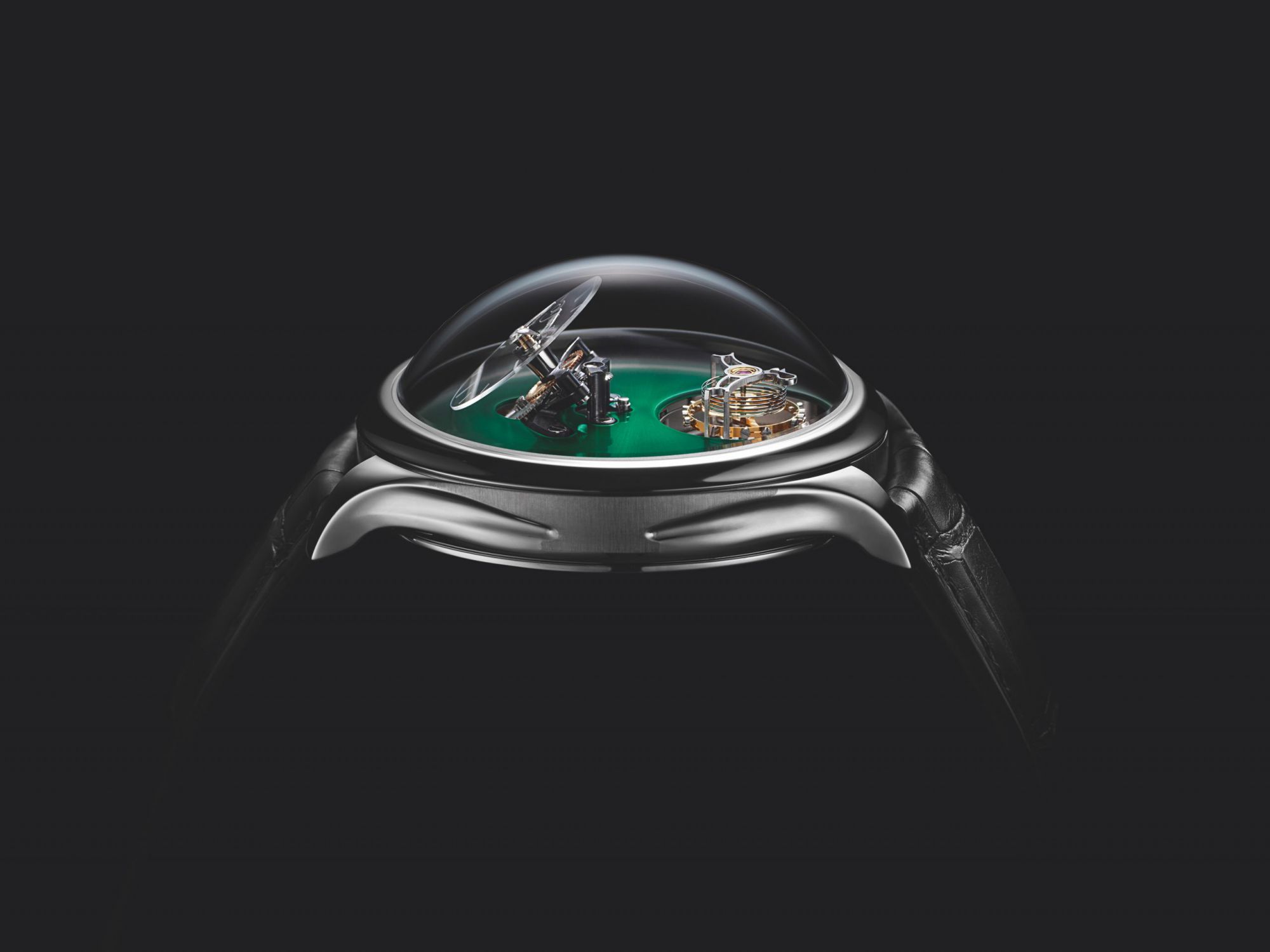 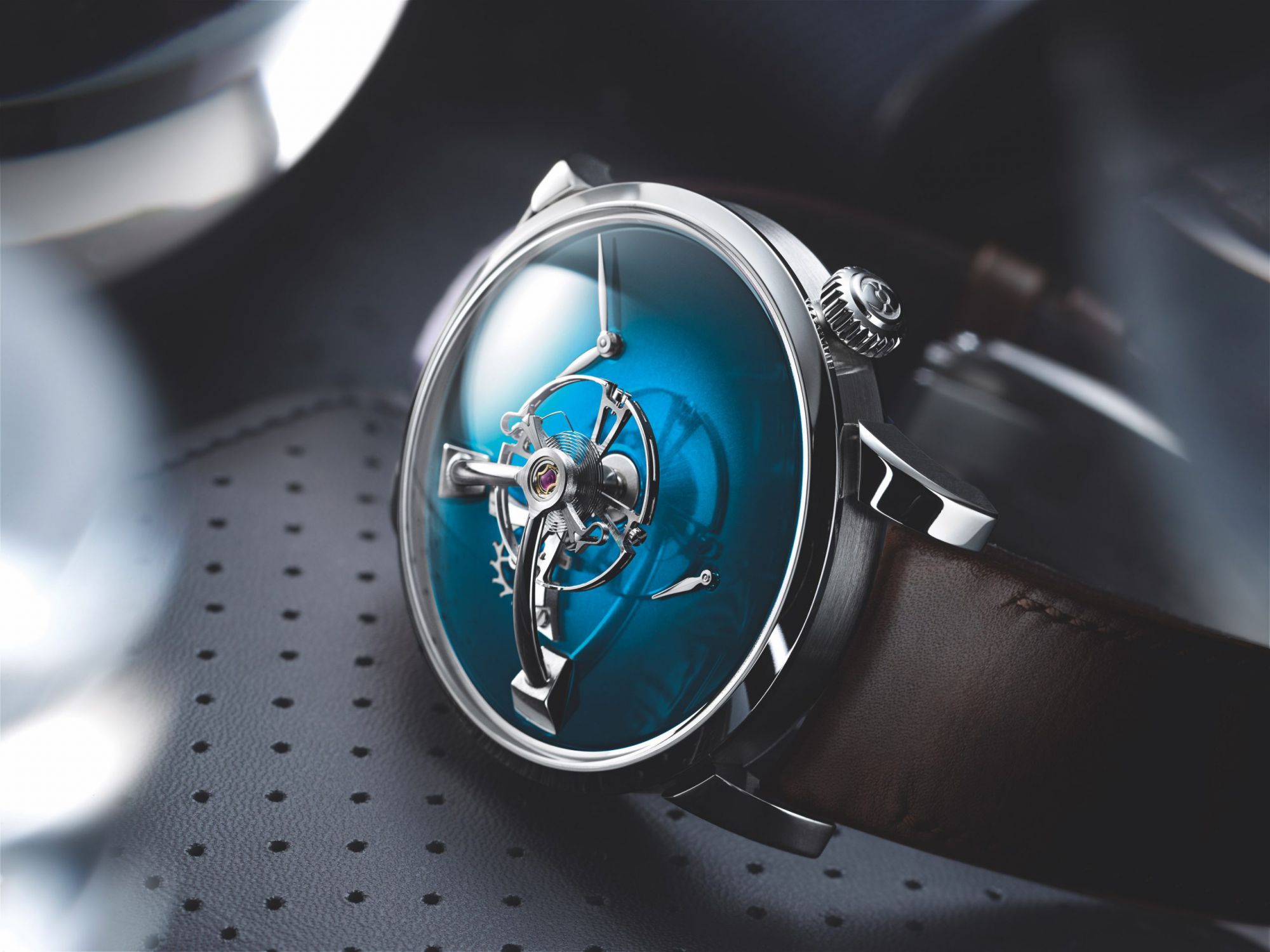 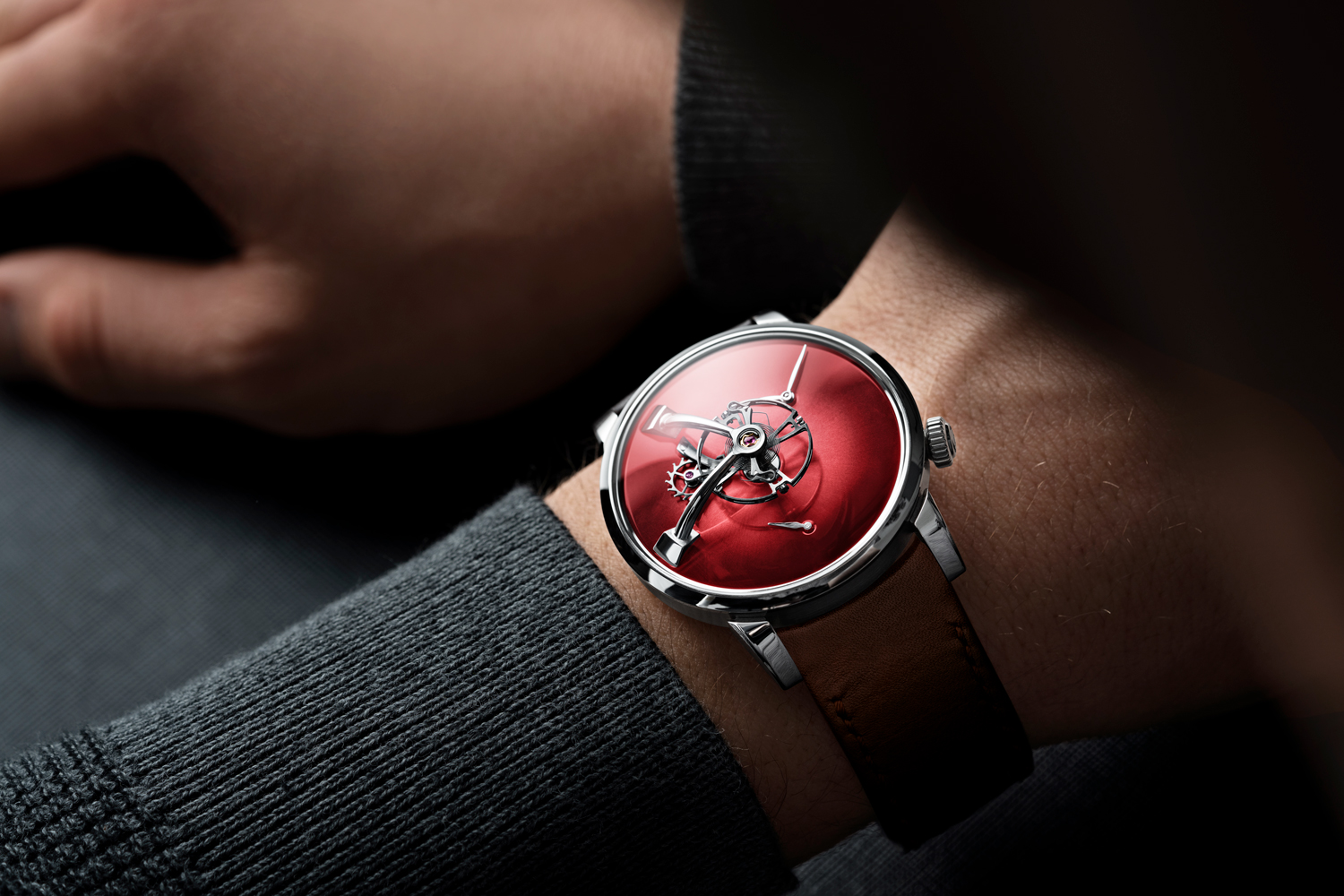 Moser & Cie. has borrowed from MB&F the concept of three-dimensional movements, a strong element of the Geneva maison’s identity, protected by a sapphire dome and featuring a one-minute flying tourbillon that rises above the main dial through a ventricular opening appearing at 12 o’clock.

Invented in the 18th century, the cylindrical balance spring is reminiscent of a worm- or corkscrew, rising perpendicularly around the upper rod of the balance staff. Commonly used in historical marine chronometers at the time, it offers the advantage of developing concentrically, and therefore geometrically, since it works perfectly along the axis of its pivots.

This gives it a significant advantage over the flat balance spring, whose opposite ends tend to exert forces on the pivots, despite the Philips or Breguet terminal curves which were specifically developed to partially correct the non-concentric opening of the balance spring.

Another reference to MB&F’s identity lies in the tilted dials, which H Moser & Cie. has adopted for its hour and minute subdials. These are inclined at 40° so that the owner of the watch is the only one to whom it reveals the secret of time, and mounted on a conical gear train ensuring optimal torque transmission from one plane to the other.

As Edouard Meylan explains, “We have Moserized the MB&F universe by developing a sapphire subdial, which melts into the background so as to highlight the beauty of our fumé dials.”

“And to preserve the purity and elegance of this true work of horological art, we have inscribed our logo like a watermark on the sapphire subdial, thereby underlining the personal character and intimate relationship binding it to its owner.”

Edouard Meylan and Maximilian Büsser are delighted with this rewarding collaborative project, which has achieved results far exceeding their expectations. In addition to the beauty of the models created in tandem, two bodies of expertise and two sets of DNA have been blended and mutually enriched.

The two different communities of the two Maisons have also pooled their skills in a wonderful spirit of openness and transparency. This experience leaves Edouard and Maximilian with a keen sense of coming back to a sense of pleasure: the pleasure of working together and of creating.

Call from the air

Call from the air