Jewel of the Sea

Exuding style and elan, the Princess V55 sets the performance bar extremely high in the sport yacht category, as Jack Haines was fortunate to discover on the English Channel just off Plymouth, UK, the home of Princess Yachts.

The impeccable pedigree of the V Class stretches back to 1994 when Princess introduced a streamlined, two-deck vessel offering pace, handling, seakeeping prowess and luxuriousness, optimised for enjoying any experience at sea.

The V55 joined the six-model line-up in 2019 in the highly competitive 50–55- foot size category. As you’d expect, the V55 taps a marketing sweet spot with an open deck layout, spacious interior and three generous cabins. Hull #40 is bound for Australia and is destined to be one of the stars of this year’s Sanctuary Cove International Boat Show.

“There is great interest in this boat as it is the latest model in the V class range,” acknowledges Greg Haines, Dealer Principal of Princess Yachts Australia. He lists the V55’s versatility and appointments as major draws for potential buyers.

“The opening aft doors give the boat that open feel – the advantage is they can also be closed off if it’s too hot or in inclement weather. We’ve ordered the boat with a Sure Shade, an electrically operated awning that extends out over the aft sunbed,” he adds. 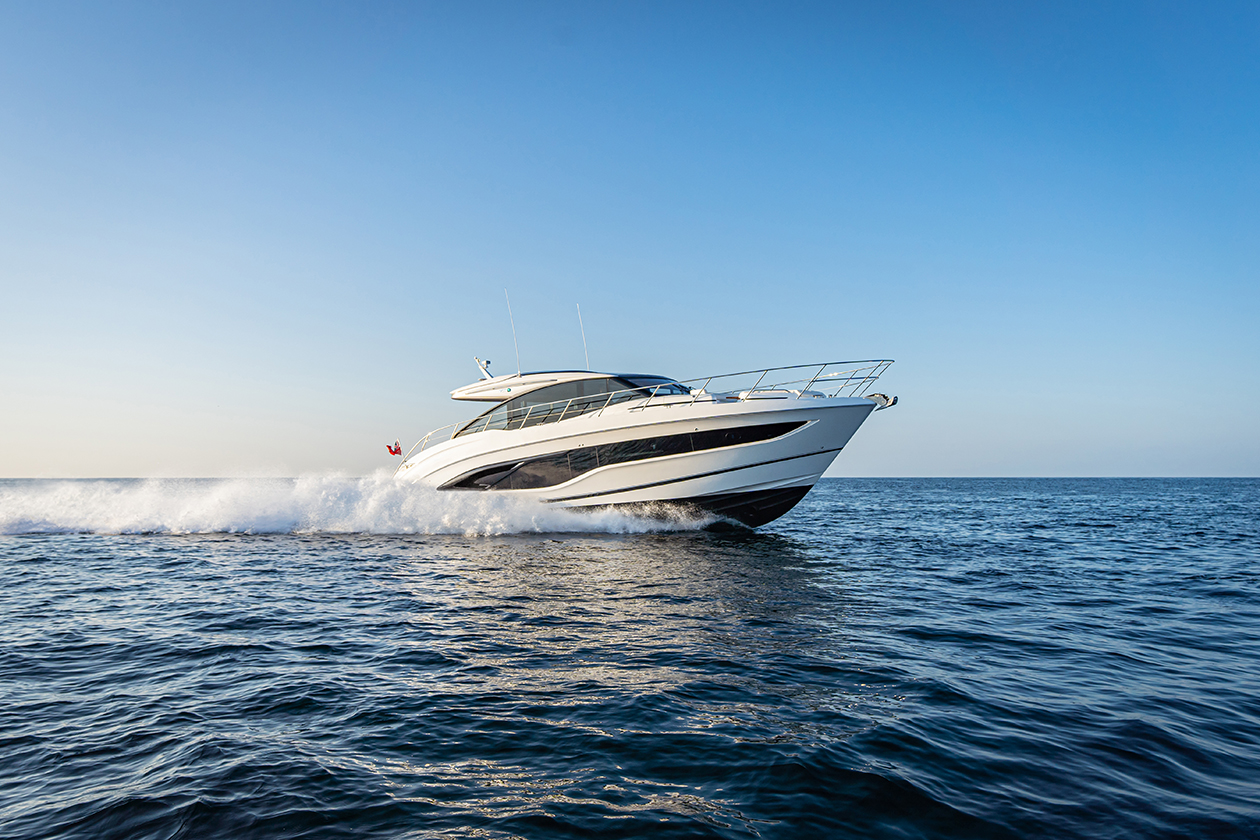 The considered design features sleek lines – a product of some fine design by Olesinski with additional input by renowned stylists Pininfarina.

While some of its competitors offer a choice of shaft drives or IPS, Princess has stuck with shafts and offers just one engine option: twin Volvo Penta D13s with 1,000 hp, each developing a nominated top speed of 37 knots.

Without a flybridge, the cockpit becomes the focal point on the V Class range, but the V55 goes a step further by inviting the saloon to become part of the outdoor environment.

To enhance this feeling, as mentioned, the cockpit doors slide to port and then drop (slowly) into a void between the engine room and the master cabin bulkhead. In so doing, they open the saloon to the L-shaped dinette and expansive sunbathing space in the cockpit.

Retract the sliding roof above the saloon and, in a matter of minutes, this enclosed sport cruiser feels almost as open and exposed to the outside world as the traditional V boats did back in the day.

The cockpit has access down either side of the sun pad moulding to the hydraulic swim platform, but there is an infill that slots between the end of the dinette seating and the aft bench so another person can sit at the corner of the enormous table when food is served. The V55’s lower deck is solely focused on sleeping accommodation, with the galley up on the main deck so the chef de partie isn’t downstairs out of the action.

Serving the decks is far easier too. Despite the galley’s proximity to the cockpit, the V55 has a decent wet bar, complete with barbecue grill, fridge and ice-maker, though cleaning the grill won’t be easy without a sink.

Because of the lack of eye-level lockers in the galley, Princess has had to be smart with the use of space, so included a three-storey shelving unit that emerges from the galley top at the touch of a button – ideal for stacking tinned food and condiments.

When not in use, it sinks back down into the counter and you’d never know it was there. The white counter with matching induction hob gives the galley a clean aesthetic, which is important when it’s as much a part of the furniture as a practical cooking station.

The amount of thought that has gone into every little detail to ensure it’s pleasing to the eye is a theme continued throughout the V55.

Whether it’s Olesinski’s attractive swooping exterior lines and the appealing curvature of the mouldings in the cockpit, or Princess Design Studio’s beautifully styled furniture, the V55 doesn’t have a line out of place.

The tender garage is large enough for a 3.45-metre mini RIB, though the moulding for this does eat into space for the optional crew cabin. In reality, few people will subject anyone – or at least anyone they hold dear – to actually sleeping in an area that’s probably best left as a deep storage void for kit that isn’t used regularly.

Fit for a princess

The place to sleep aboard the V55 is the master suite, which is full beam amidships and finished with real style. The curved timber on the lower deck appears to wrap itself around you as you move through the boat, creating a warm, inviting atmosphere that emanates through all three cabins.

The master has over 1.8 metres headroom, even around the sides of the bed where there are raised sections in the floor. Storage is a major focus. The designers have resisted fitting a chaise longue and opted instead for a cosy settee with storage to port and a run of deep drawers on the starboard side along with a wide hanging locker.

Other neat touches include a cupboard behind the cabin door for a washer/dryer and the use of a sliding door to the ensuites, maximising the amount of space inside. The VIP in the bow doesn’t have the space of the master, but is an equally well-appointed cabin with a large double berth that can split into a pair of singles as an option.

Drawers beneath mean there’s no tiresome lifting of mattresses to access storage. A vanity unit to port adds a touch of luxury. This cabin shares its bathroom with the third cabin, but guests in here at least have private access.

The third cabin is no poor relation, despite the bunk beds. It’s filled with natural light and has an unusual amount of storage for a cabin of its size. Princess considered including side-by-side twins or a double bed here but decided against it because of the negative effect the extra beam could have had on performance and seakeeping – let’s see if it was worth the sacrifice.

With a succession of storms battering the UK in the run-up to this test, there was a significant groundswell running through Plymouth Sound as we ushered the V55 west toward the relative shelter of Cawsand Bay. Though threatening rain clouds hung heavily, the sea state proved ideal to get a handle on the ability of the boat’s Olesinski hull.

This is no super-skinny sport boat, but its confident attitude in tackling the mounting swell and froth-tipped crests suggests that Princess is yet to succumb to the interior space-over-seakeeping philosophy.

It pays to be kind on the throttles and drive the boat into a head sea with sympathy, but it will reward with soft landings and nothing in the way of rattles or creaks from the structure or cabinetry.

It feels reassuringly solid romping through big troughs with enough power from the 12.8-litre Volvos to haul you out of trouble, though there is a noticeable amount of turbo lag to contend with if you happen to drop off the boost.

The V55 is a quick boat, capable of 35 knots in good conditions, but it takes some time for the dual-stage turbos to spool up and work their magic, evidenced by a 0–30 knots time of 18 seconds. That said, with the turbos spinning, the reserves are punchy at the upper end of the rev range and the pick-up eager.

The steering is as light – if not lighter – than fly-by-wire IPS steering and lacks some of the feel and bite that Princesses generally have in abundance, with less of the grin-spreading heel than usual. This in turn leads to a more laboured turning circle, but there are no complaints about the V55’s refinement, even with the cockpit doors open.

It’s an accomplished cruising machine and one that will comfortably eat up the sea miles whether you’re taking it easy at displacement speeds or travelling over 30 knots.

Although, 25 knots does feel like the boat’s natural fast cruising speed where noise levels are a restrained 74 d(B)A and the range just shy of 200 nautical miles with a 20 percent reserve. The main saloon sits opposite an up-galley arrangement to starboard, which affords easy service and a more social experience for whoever is cooking. 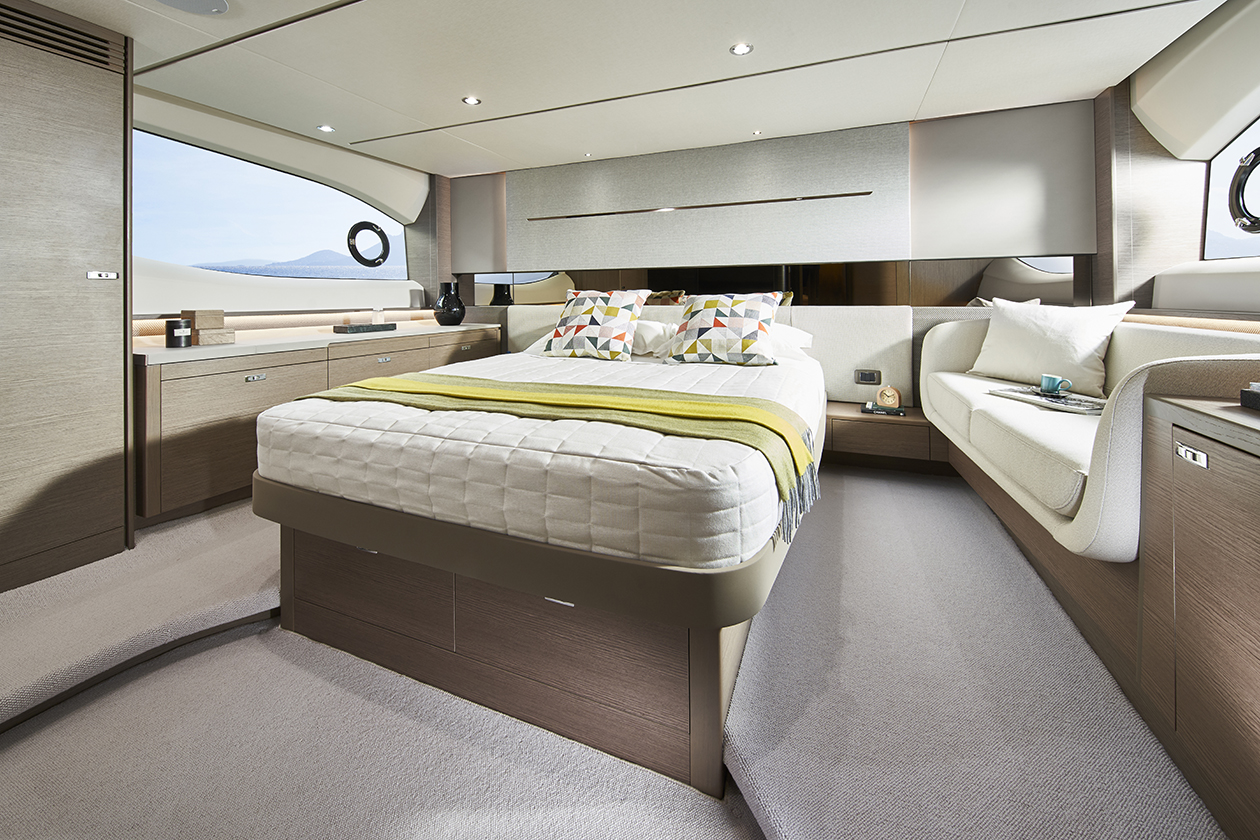 The midships master is both spacious and light, while good headroom allows for free movement even where the sole is raised around the island berth. 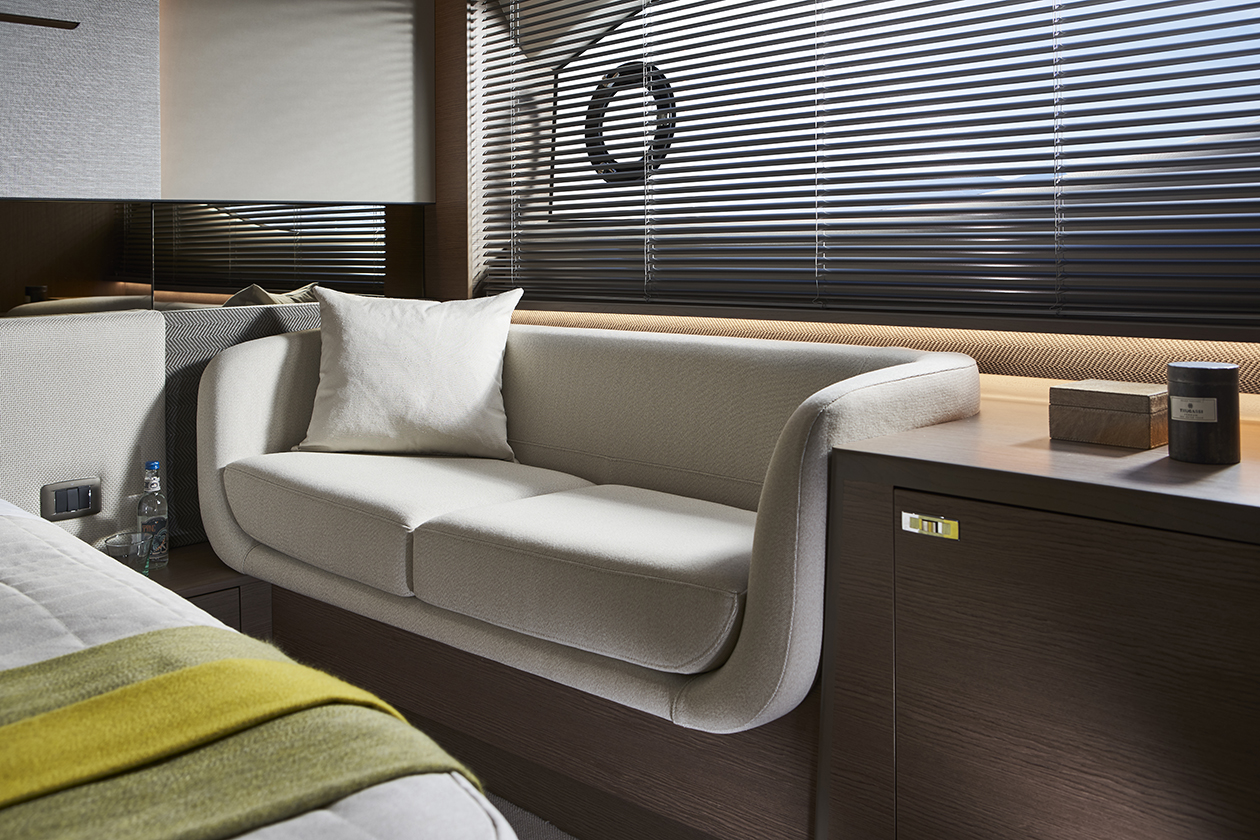 A comfortable sofa affords space for relaxing, and storage is decent.

The helm station and driving position make the V55 a pleasure to drive. The seat ergonomics are perfect with enough adjustment so you can pull yourself close to the dash and have the steering wheel and throttles within easy reach.

Our test boat had the optional joystick that combines the props and proportional bow and stern-thrusters. This gives you IPS-like control at slow speed.

It’s a sensible option to have, but the boat is so easy to control with throttles and thrusters that it feels surplus to requirements.

The dash is all digital with twin 17- inch Garmin MFDs and a third smaller display that will most likely be used for engine information, though all three are endlessly configurable.

A bank of hard keys is mounted to the right of the wheel, which can be used to control all three screens if it is too bumpy to use the touchscreen interface comfortably.

It’s a great looking helm, too, with a more eye-catching design – like the moulded contour on top of the dash that appears to peel back and reveal a classy leather top.

There are issues though, like the restricted view to starboard because of the large windscreen mullion and a lack of places to put loose items, aside from two shallow cup holders and an oddly shaped tray that won’t fit the dimensions of a modern smartphone. Considering other rivals have wireless charging pads and integrated iPad mounts at their helms, the V55 lags behind here.

These minor blemishes aside, the V55’s all-court ability, top-drawer interior and polished manners give it an air of all the boat you could ever need.

Given the number of larger boats in its range, that’s probably not what Princess wants to hear, but the truth is this boat could easily sleep six adults for a week, if not more, yet is manageable enough to be run by two people, or even one if you have the optional cockpit control station.

The V55 has been designed for owners who wish to spend more time in close proximity to the sea and its many moods while truly experiencing what a sport yacht has to offer.