Hot off the back of her victory in the Sydney Gold Coast Yacht Race, Andoo Comanche headed to Rivergate Marina & Shipyard for expert race preparation ahead of the Brisbane to Hamilton Island Yacht Race.

The 30.5-metre champion maxi – nicknamed the aircraft carrier for her 7.9-metre beam – has been chartered by John “Herman” Winning for a 24-month racing schedule that started with the Sydney to Gold Coast Race, followed by Brisbane to Hamilton Island and then Hamilton Island Race Week.

“Our focus will then turn to preparation for the Rolex Sydney Hobart Yacht Yace ahead of a campaign in New Zealand in early 2023,” Winning told Sails online. “We’re looking forward to getting to the start line and hopefully continue her winning run.”

Comanche was commissioned by software mogul Jim Clark, designed by VPLP/Verdier Maxi, constructed of carbon fibre by American builder Hodgdon and delivered in 2014. 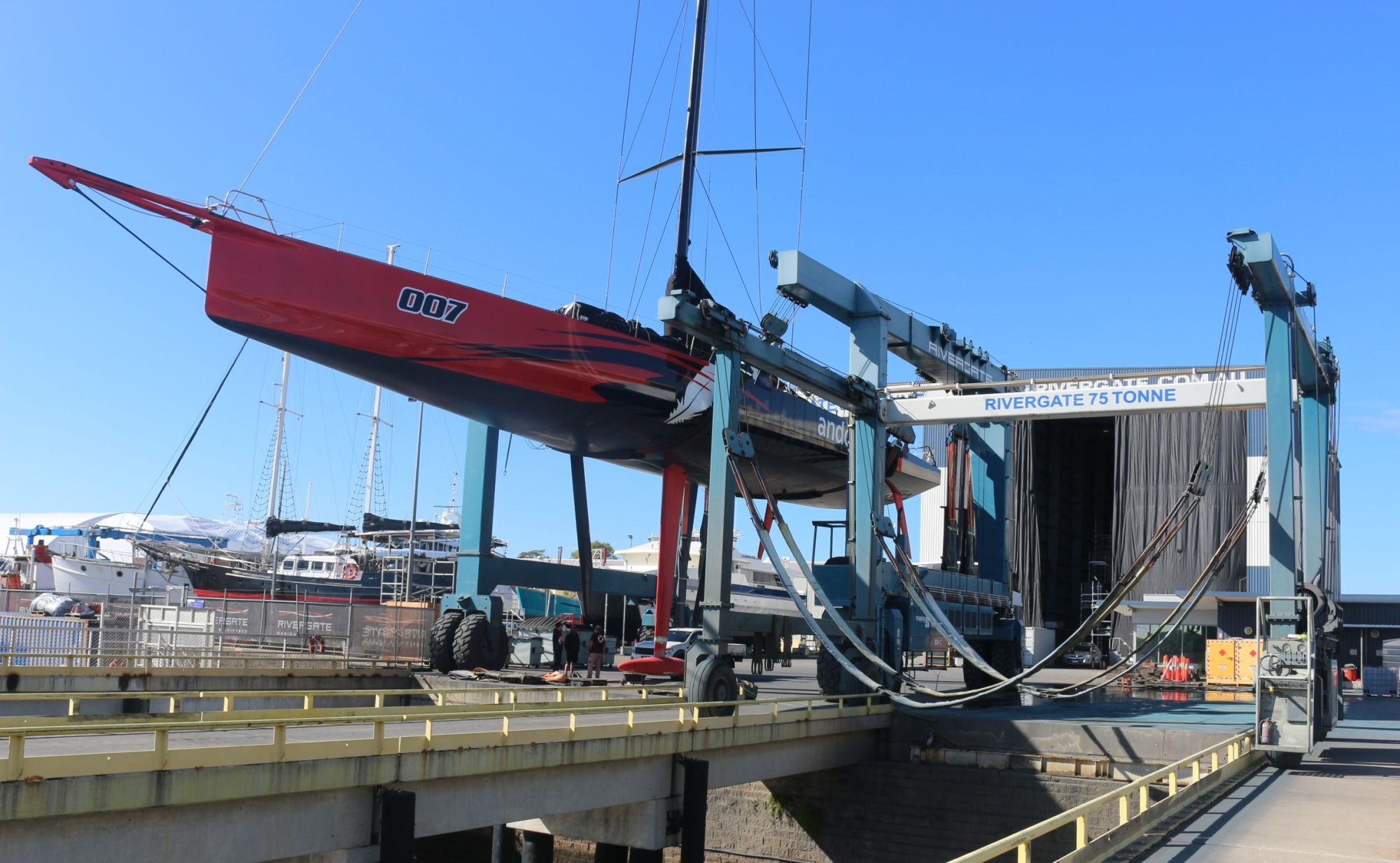 The 30.5-metre champion maxi is nicknamed “the aircraft carrier” for her 7.9-metre beam. 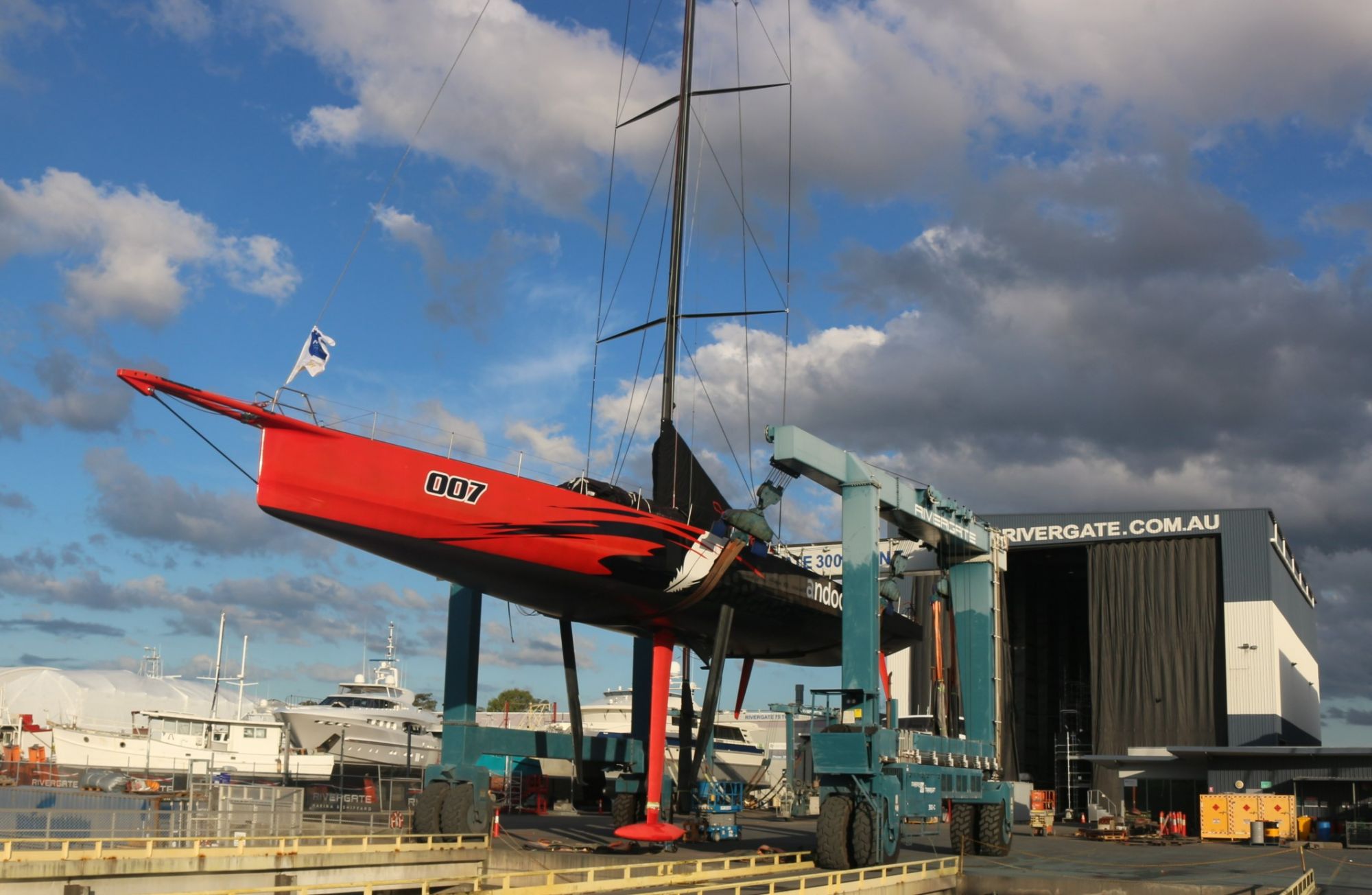 The yacht is a three-time winner of the Rolex Sydney Hobart.

With a rig height of 48-metres, Andoo Comanche presents a challenge for haulout.

The yacht is a three-time winner of the Rolex Sydney Hobart Yacht Race, taking its first line honours win in 2015, its second in 2017 after Wild Oats XI, which had crossed the line first was penalised, and the third in 2019.

“Rivergate is one of the few places on the east coast where maxis and racing yachts can get access in all tides, all year round and haul out. Hamilton Island Wild Oats, Black Jack and Stefan are also here at the moment ahead of the race start on Friday.”

Joe Akacich (Black Joe) is Andoo Comanche Team Manager. The racing yacht had a three-day window to undertake repairs on the hull, keel and rudders. “We’re basically in and out overnight,” says Akacich.

“She’s a tricky boat. At 8 metres wide with a 7-metre draft and a rig height of 48 metres, geometry-wise, she’s a challenge. At our Sydney base, Woolwich dock, we have to use a crane,” says Akacich.

“It was always our plan to do a quick look over the boat out of water ahead of Hamilton Island Race Week. Rivergate is the only place we can get in and out smoothly. We have a solid relationship with Andrew and his team, who are always accommodating and can handle the quick turnaround.”

The Andoo Comanche crew are elated and relieved following their Line Honours win in the Noakes Sydney Gold Coast Race, which they completed in 1 day, 17 hours, 55 minutes and 43 seconds.

The 384-nautical-mile race from Sydney Harbour to the Gold Coast didn’t produce ideal conditions for the seasoned maxi, with light winds providing a tactical challenge for the boat that relishes high speed on the water.

“There’s a lot of relief that we pulled it off,” says Joe, who along with Sam Fay and Iain Murray put together the Andoo Comanche Team.

“These guys have only been together three or four weeks. We had an intense week training, sailing every day in wind and swell, then the race conditions didn’t really suit us. We were lucky and worked hard to win. She’s really a beast. Show her a bit of wind and she’s away!” 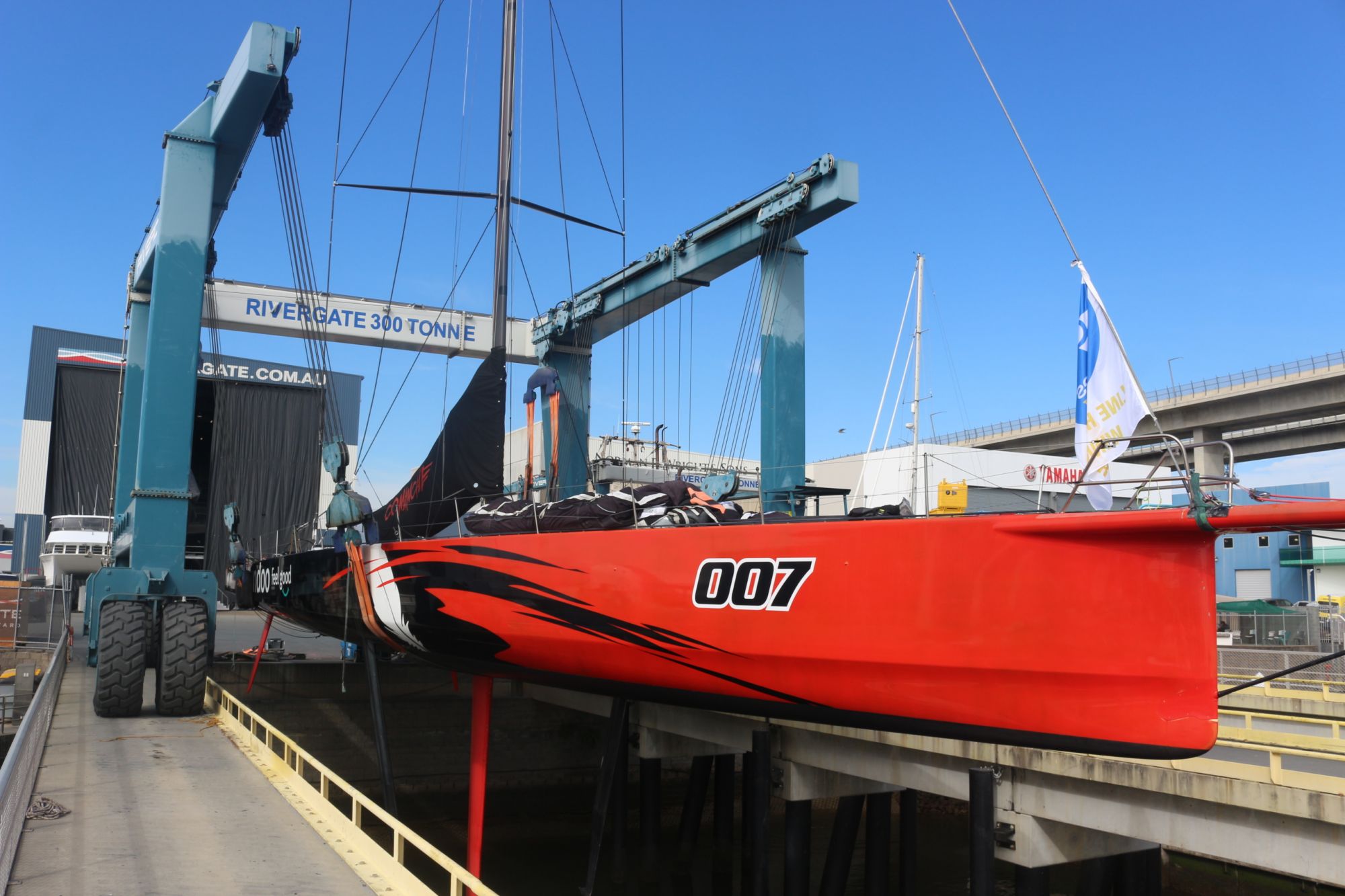 Now back on water at Rivergate, Andoo Comanche will make final race preparations before cruising to Royal Queensland Yacht Squadron on Thursday, racing with a full crew of twenty on Friday.

After Hamilton Island Race Week from 20 to 27 August, Andoo Comanche will return to Sydney to train for the next events in the Audi Centre Sydney Blue Water Pointscore Series, which begins with the Flinders Islet Race on Saturday 24 September and culminates in the icon of Australian sport, the 2022 Rolex Sydney Hobart Yacht Race on Sunday 26 December.

Then it’s off to New Zealand for a tilt at the superyacht regatta, the Millennium Cup, from 13 to 16 February 2023. “We’re in it to win it, every race,” Joe attests. “We’re chasing nothing but bullets everywhere we go.”