“You’re gonna need a bigger boat,” declared Heesen Yachts’ CEO Arthur Brouwer at the yachtbuilder’s press conference during the Monaco Yacht Show. Although the statement was made with tongue placed firmly in cheek, with Brouwer standing in front of a Jaws-inspired animation (with hashtag accompaniment #jawsdropforHeesen), the Dutch company was serious when it came to the numbers supporting the declaration.

Brouwer highlighted the trend for global growth in GDP, in particular for the US (22 percent) and China (15 percent), pointing to positive trends for wealth growth in its client base, who have reported an average of 5.3 percent increase in their own fortunes. There are now over 2,000 billionaires globally, up 13 percent, he added.

The CEO also mentioned that Heesen has high hopes for a return to previous levels of activity from within the Russian market, which demands a combination of speed and quality in yachts for which the company is known.

Heesen currently has three yachts firmly under offer, including a confidential 78-metre project in “extended discussions” and close to being signed, which is expected to be built in aluminium. 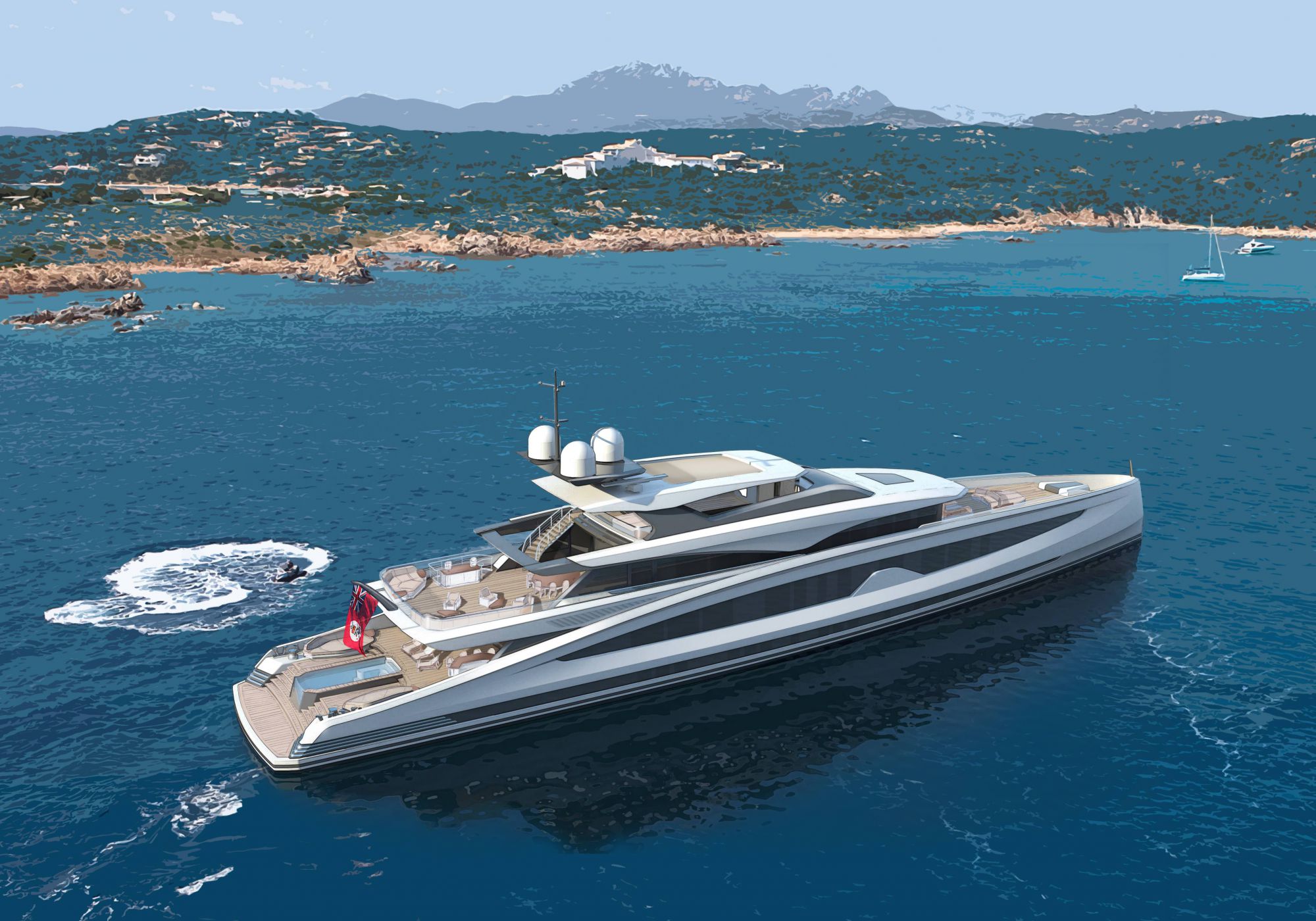 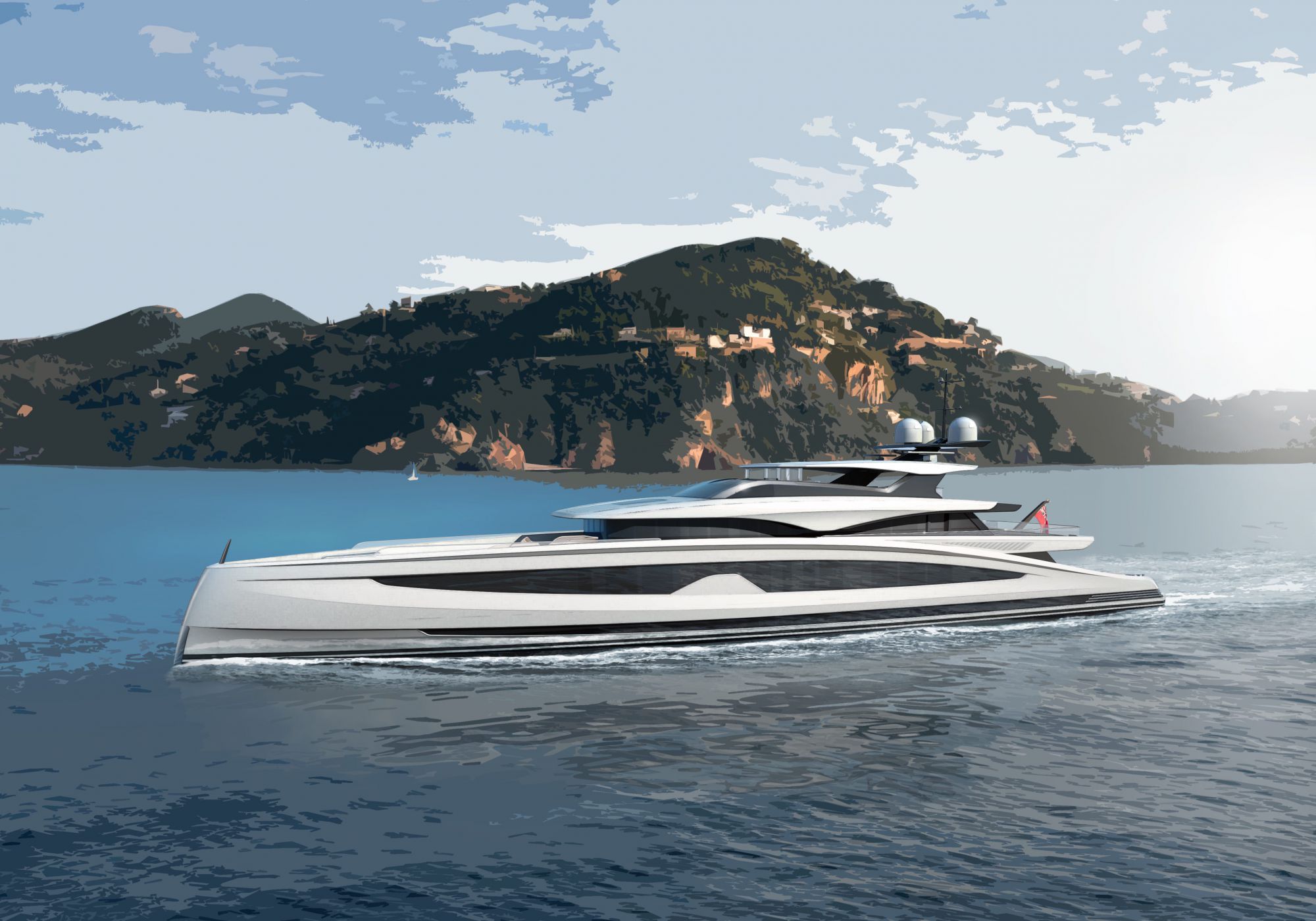 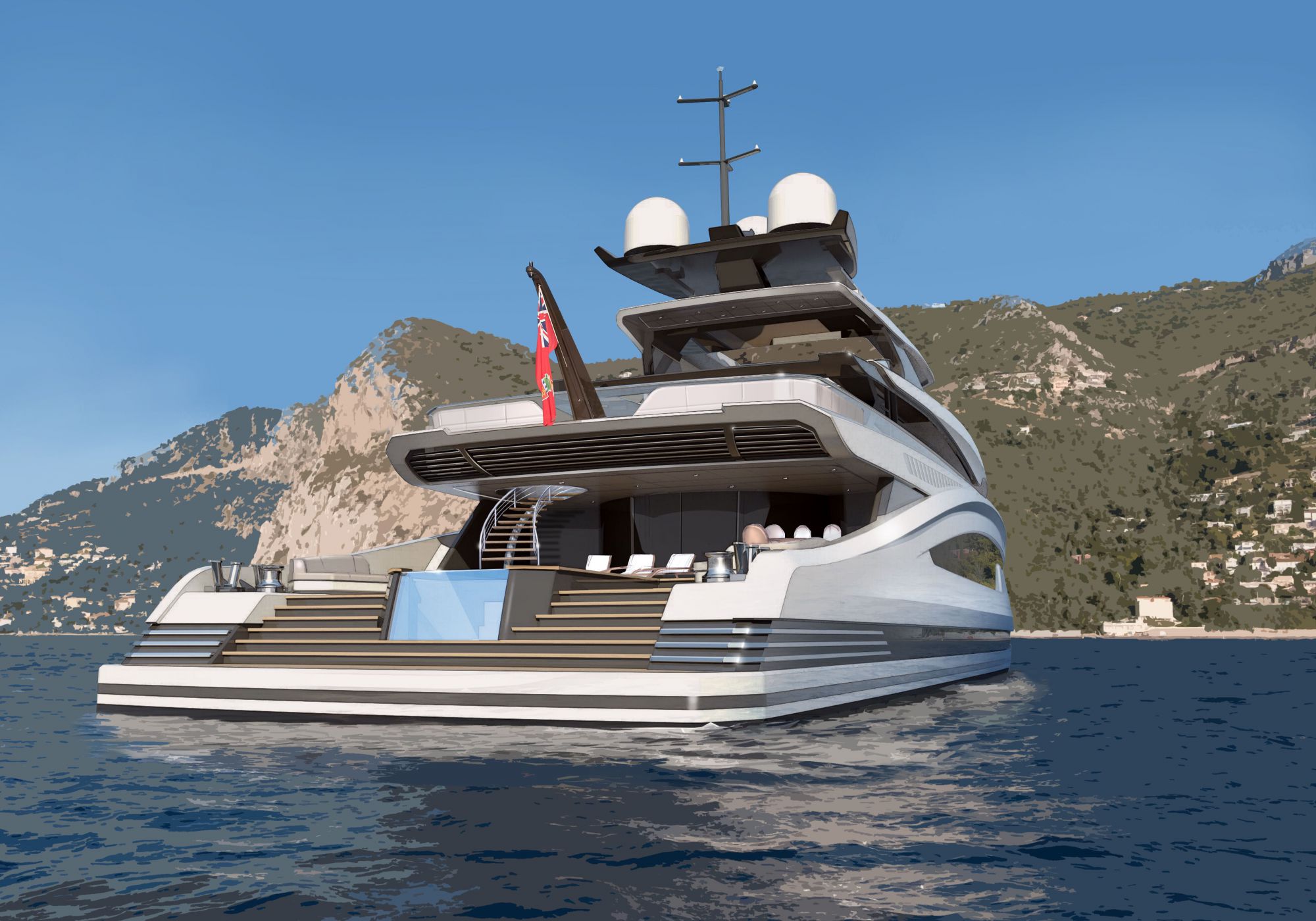 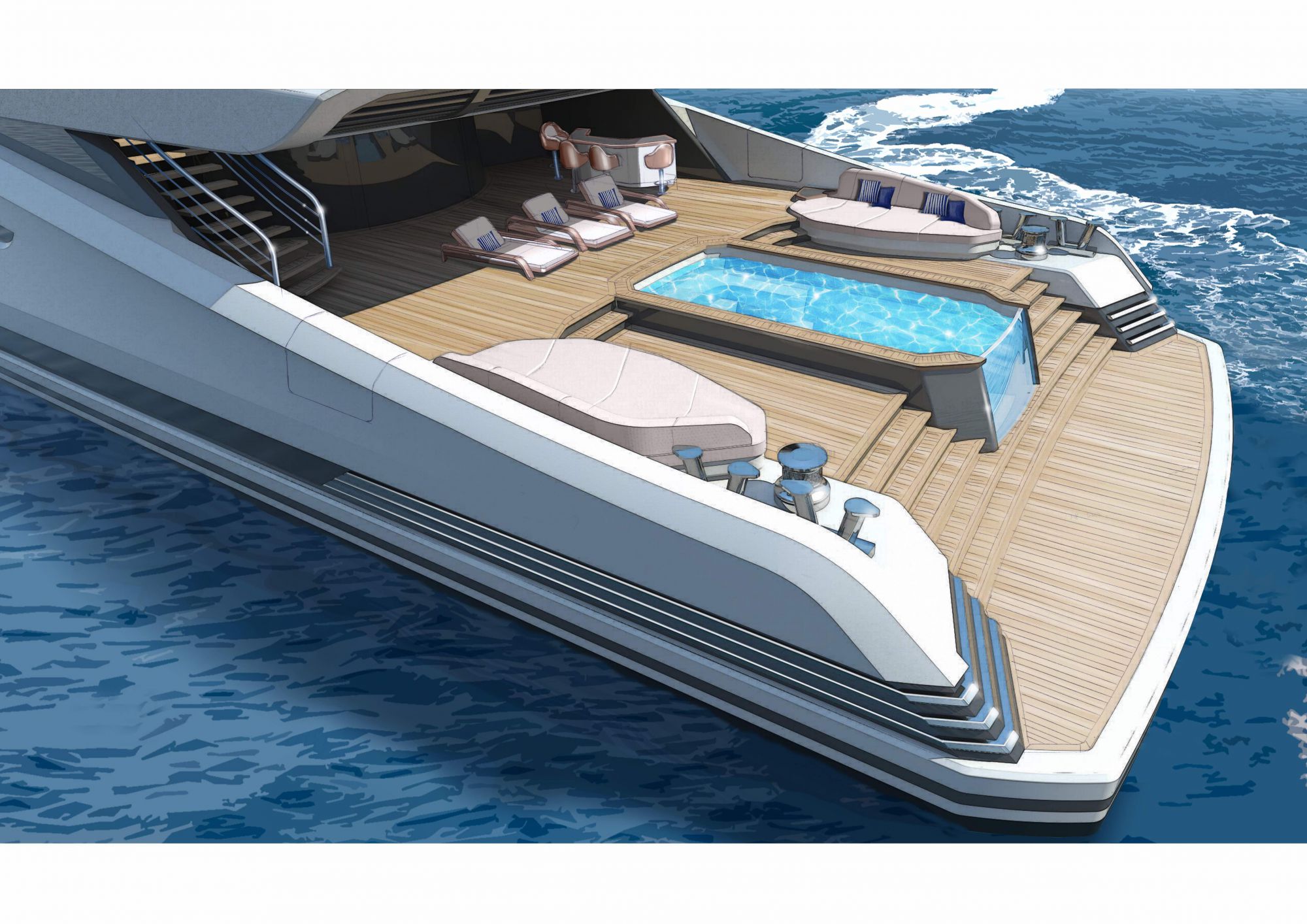 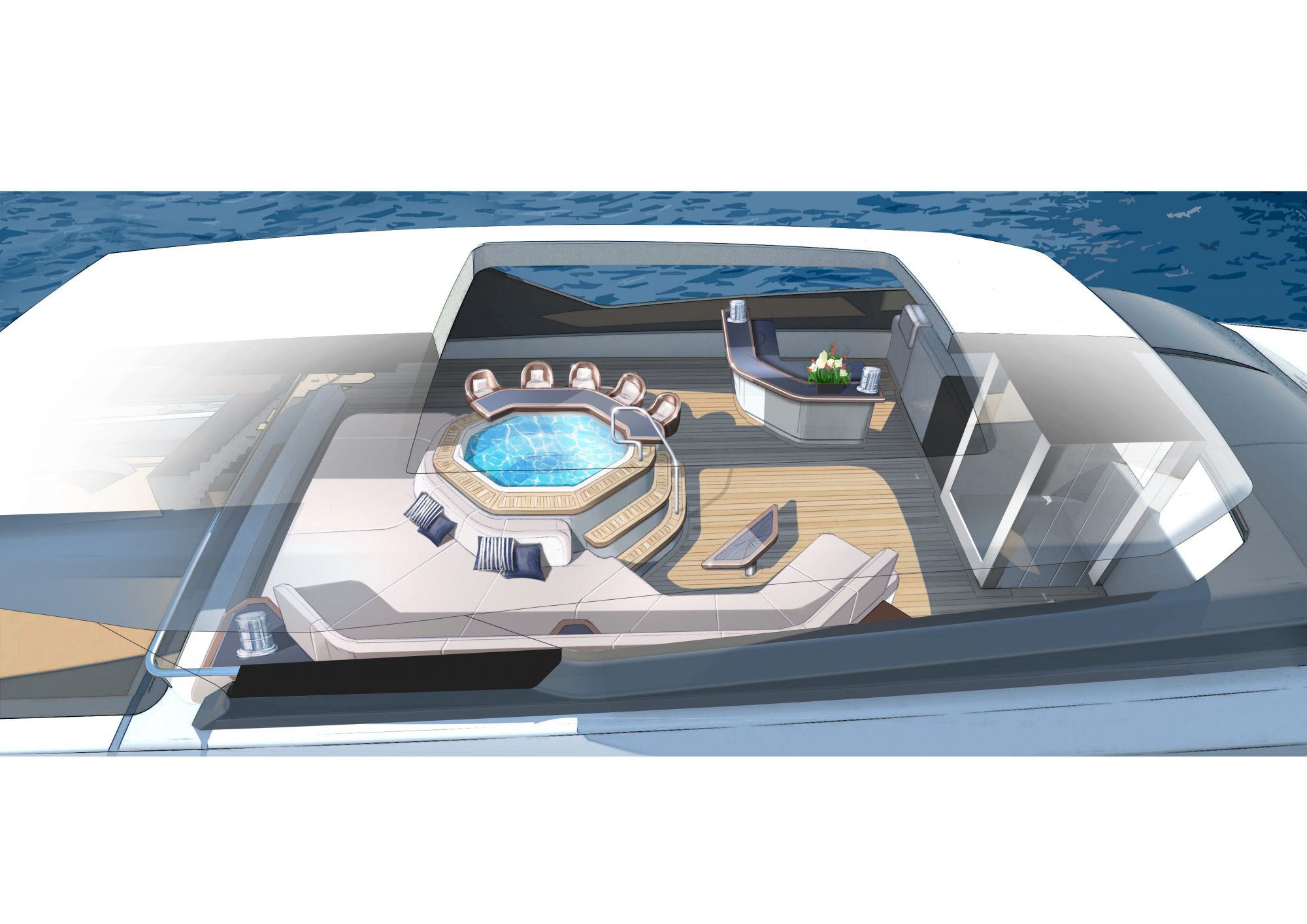 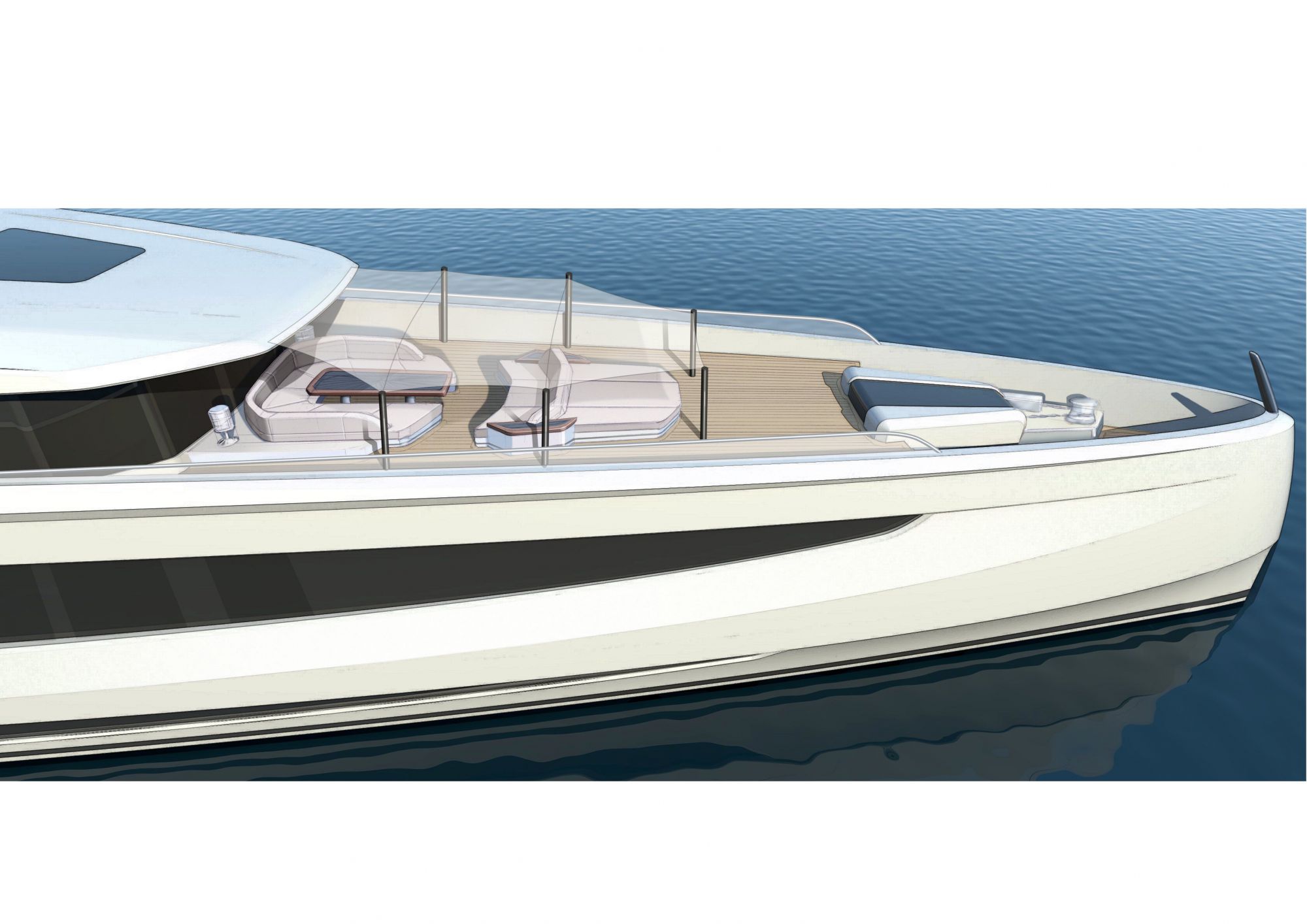 There are 12 yachts in build at Heesen’s Oss facilities in the Netherlands, due for delivery between now and 2021, with approximately half of these being built speculatively. The company’s financial stability allows for these spec builds, which are attractive to clients who wish to take on an efficient project that is already under construction with a reduced delivery time of one or two years, added Brouwer.

Mark Cavendish, Heesen’s Sales and Marketing Director, commented that since the company’s launch almost four decades ago, there has been a growing demand for larger yachts and the company is evolving to meet the appetites of clients.

Whereas the builder was once firmly focused on the 30-to-40-metre segment of the market, tastes for larger yachts encouraged Heesen to increase its capacity through building of a 90-metre shed and 85-metre dry dock. Hence the new mantra of “You’re gonna need a bigger boat”.

The press conference was used as a launch platform for two new yacht designs: Avanti, a 66-metre Winch design, and Maximus, an 83-metre from the drafting board of Clifford Denn.

Avanti is a 1,200gt, steel-hulled yacht that has the “sculptured, graceful lines” of a characteristic Winch design, said Cavendish. With a raised pilothouse, it has a sporty look with lines that “reflect the ocean, creating a muscular, contemporary appearance”. A terraced aft deck with five-metre infinity pool will be a hive of activity for those who enjoy the outdoors, while the removal of side decks on the main deck provides a rare full-beam main deck saloon for arguably the largest saloon space within this size range. The striking profile includes an “elegant sheer line which connects the strong bow to an inviting transom” added Heesen.

Fans of wellness activities will enjoy the full spa on the lower deck, incorporating a gym, hamam and sauna. The owner’s suit leads out to a private sky lounge and outdoor dining space, while the sundeck features a Jacuzzi and bar. 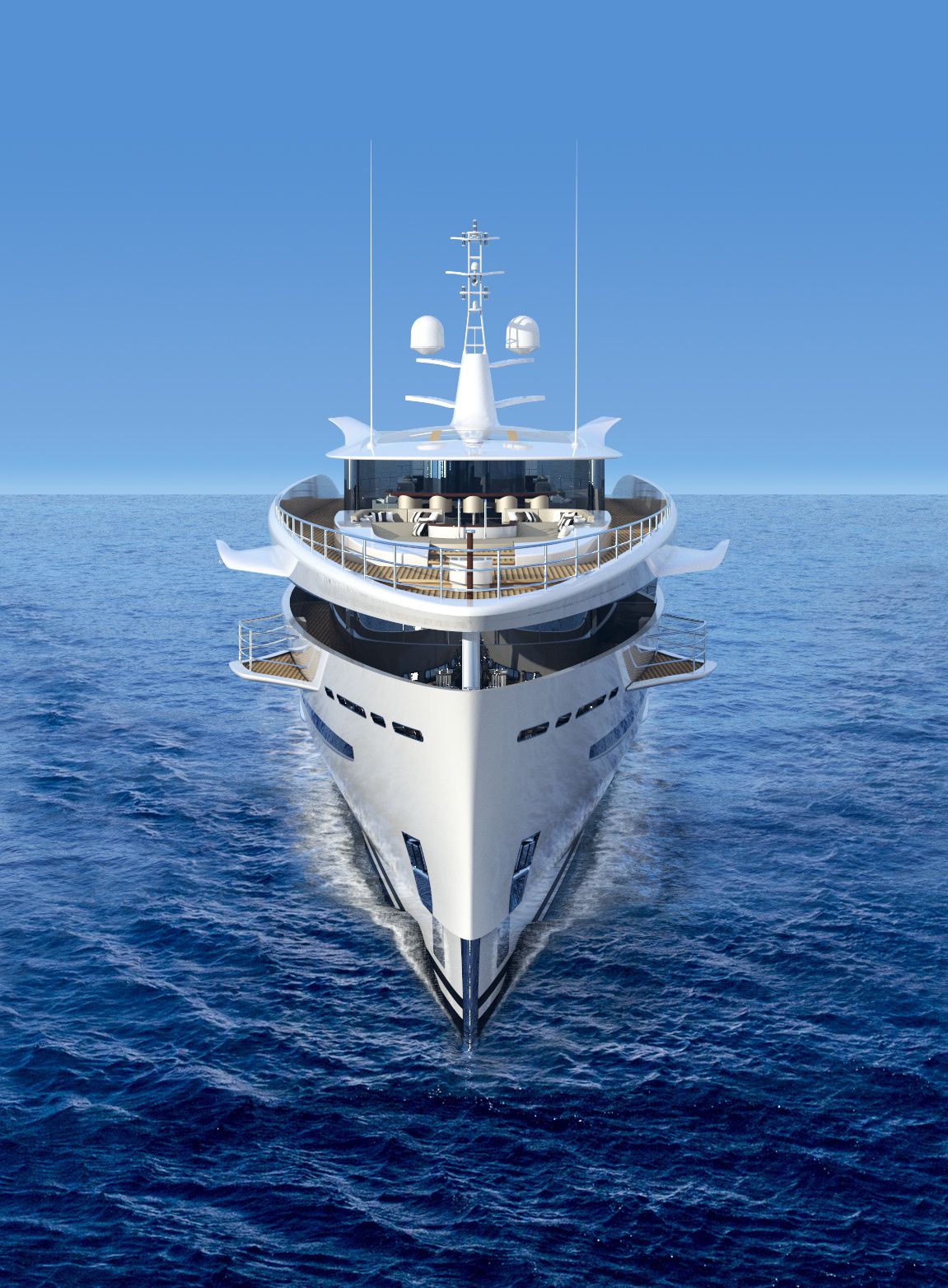 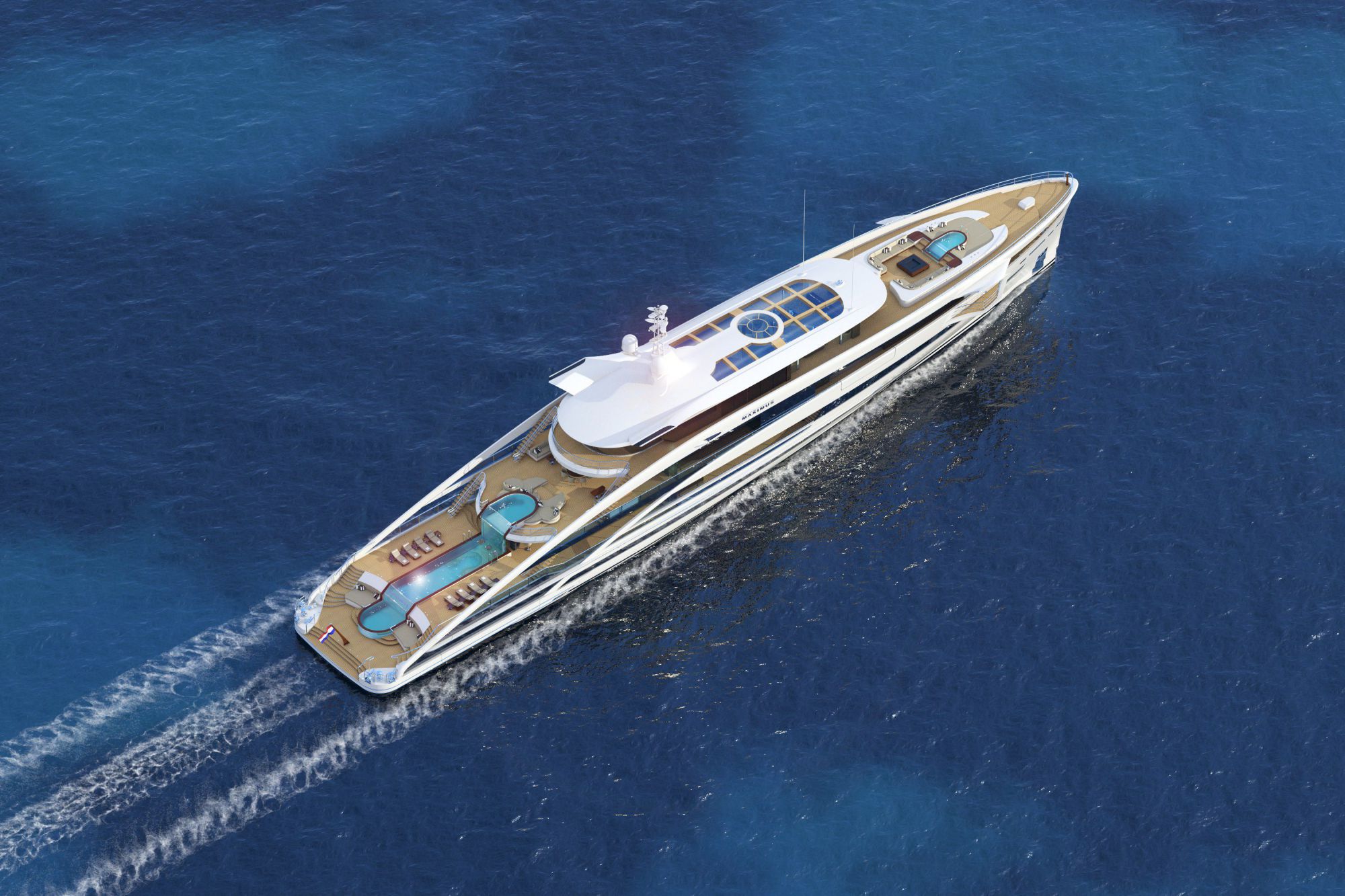 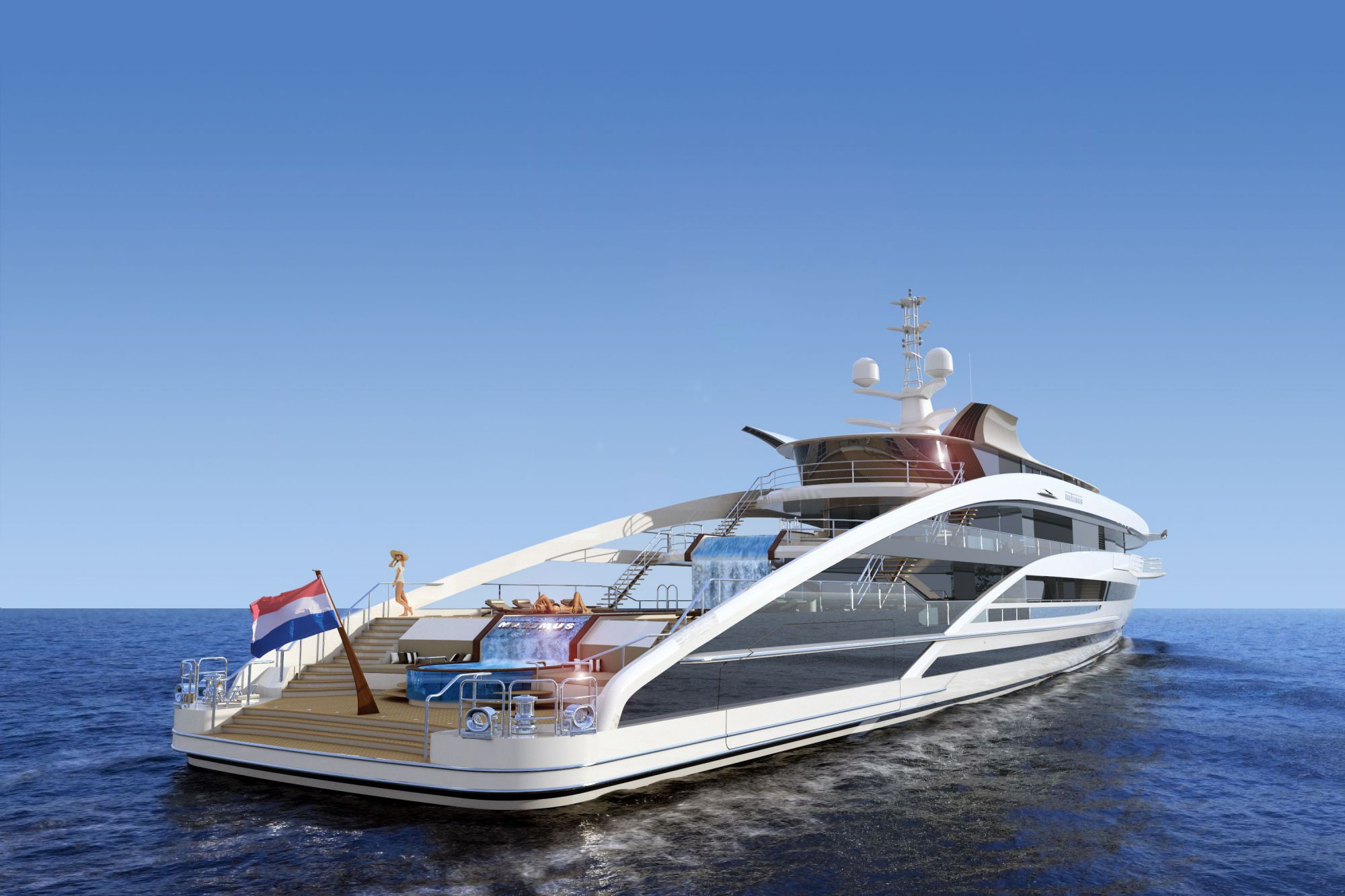 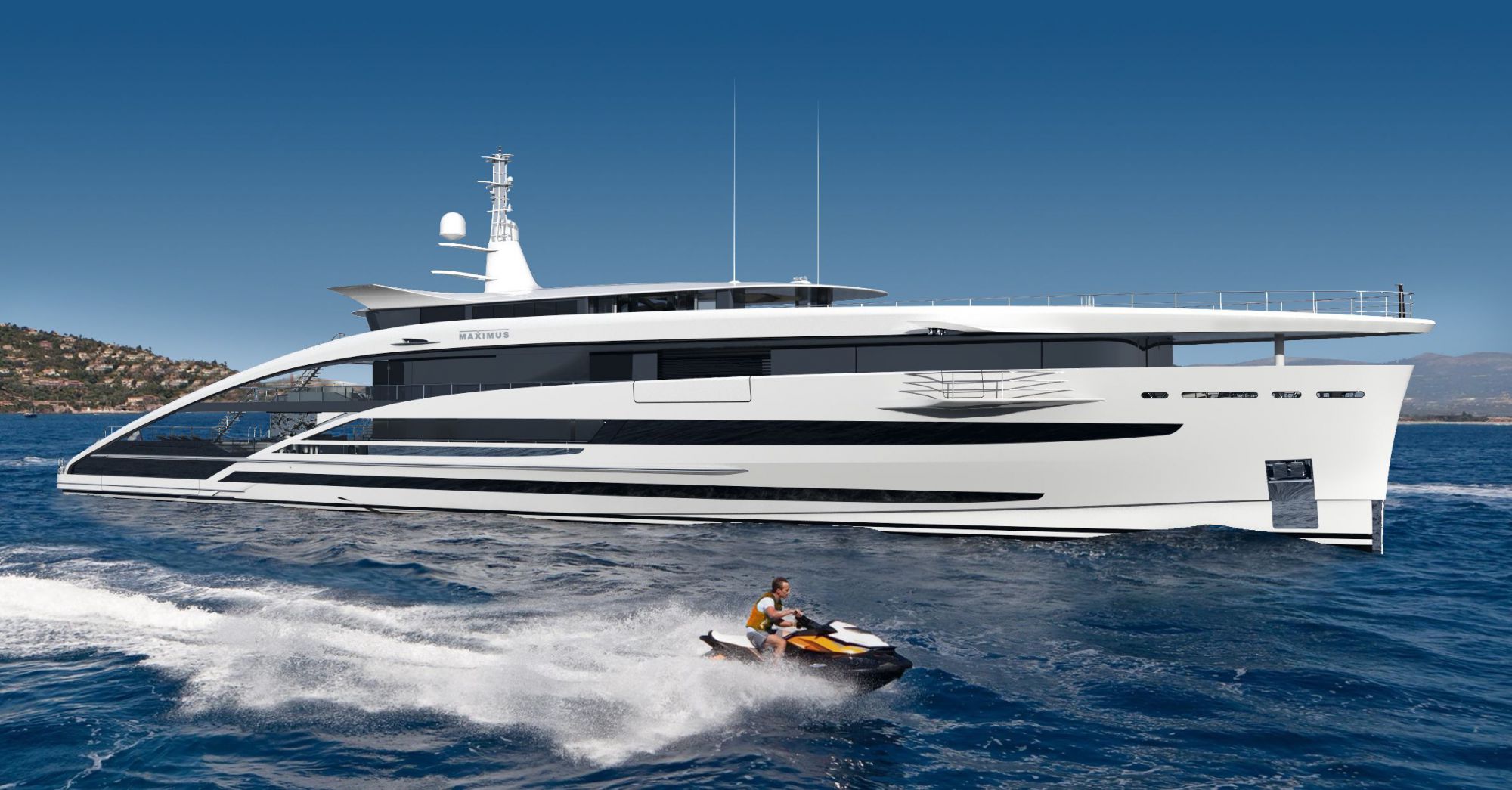 Maximus has been created as an inspirational concept for potential yacht owners looking to build a modern superyacht. Innovative features and a futuristic profile have been designed to “stimulate discussion and inspiration”. Aptly named, it is the largest yacht that Heesen could build in both length and volume, and would be constructed in steel.

Denn’s experience in designing commercial passenger ships lends itself to a yacht of this magnitude, with a forward-placed wheelhouse to maximise exterior deck space for guest use rather than leaving the foredeck out of bounds and redundant. Hydrodynamic efficiency is amplified through a near-vertical bow to maximise length at the waterline, also allowing increased space towards the yacht’s aft for a large pool area with multi-level waterfall and large bathing platform.

The striking, wide staircases across all the yacht’s aft decks are clean in design and pleasing to the eye.

Next year marks Heesen’s 40th anniversary and it seems that, with a raft of new build projects underway and interesting concepts receiving the limelight, the yard’s ambitions for building bigger and better are on the right track.