Maritimo Racing’s sail contingent has embarked on the journey south to Sydney to compete in the 2021 Rolex Sydney Hobart Yacht Race.

The yacht was formally farewelled today by the Gold Coast’s Mayor Tom Tate (pictured above)  as it headed off for the grueling and world-famous event.

Maritimo 11 will be skippered by internationally recognised professional yachtsman, Michael Spies, a veteran of 43 previous RSHYR’s.  “After last year’s cancellation and the disappointment that brought, we are extremely excited to be going to Sydney again and feel confident we will campaign well for the city,” he said.

Mayor Tate in wishing Maritimo 11 all the best on behalf of the city said its campaign epitomised the entrepreneurial have-a-go culture the city was famous for.

Bill Barry-Cotter and brother Kendal, an integral member of the Maritimo Racing Team, sailed together in the Sydney Hobart in 1976 when they sailed Bill’s Carter 33 named Ghost to a divisional win. 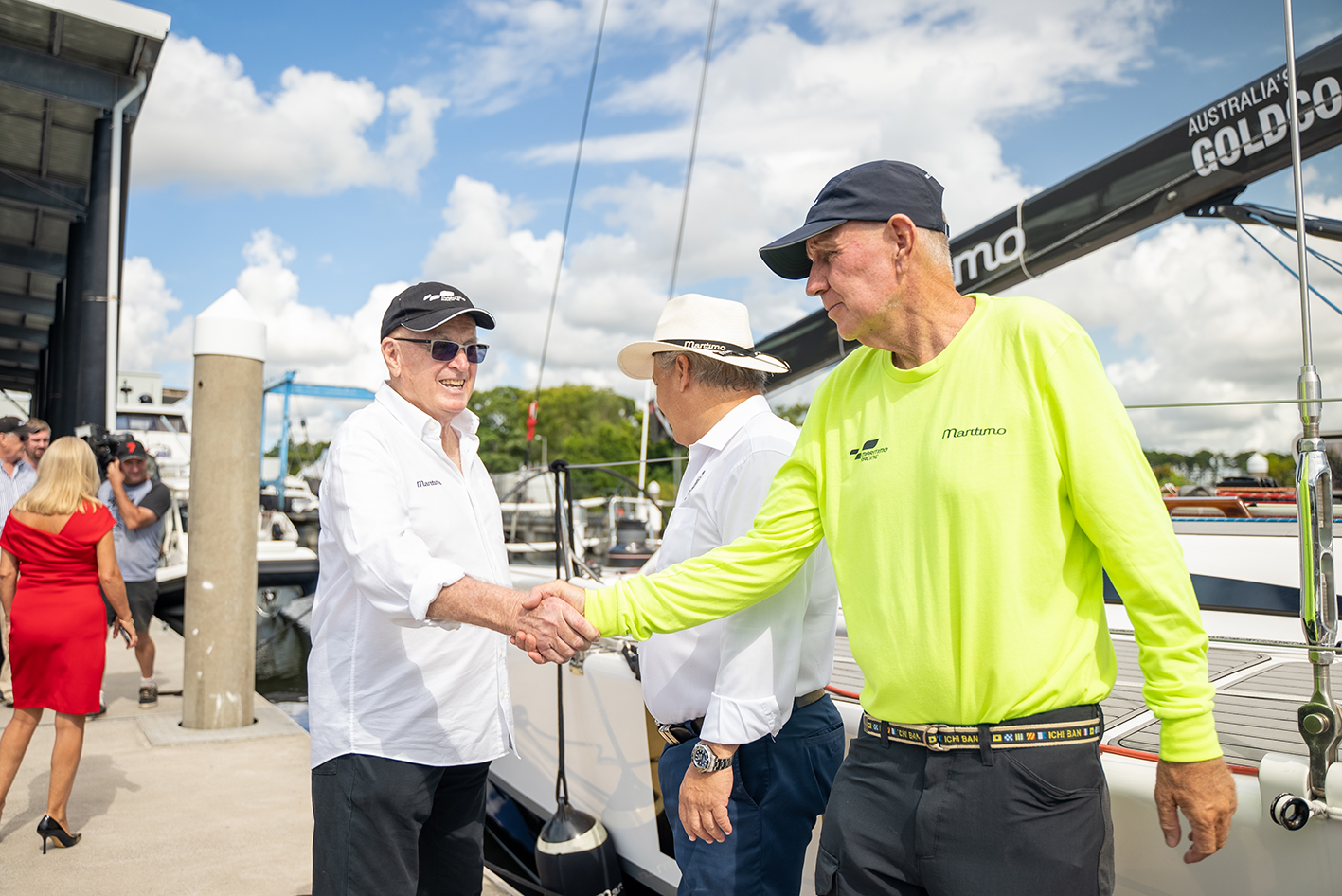 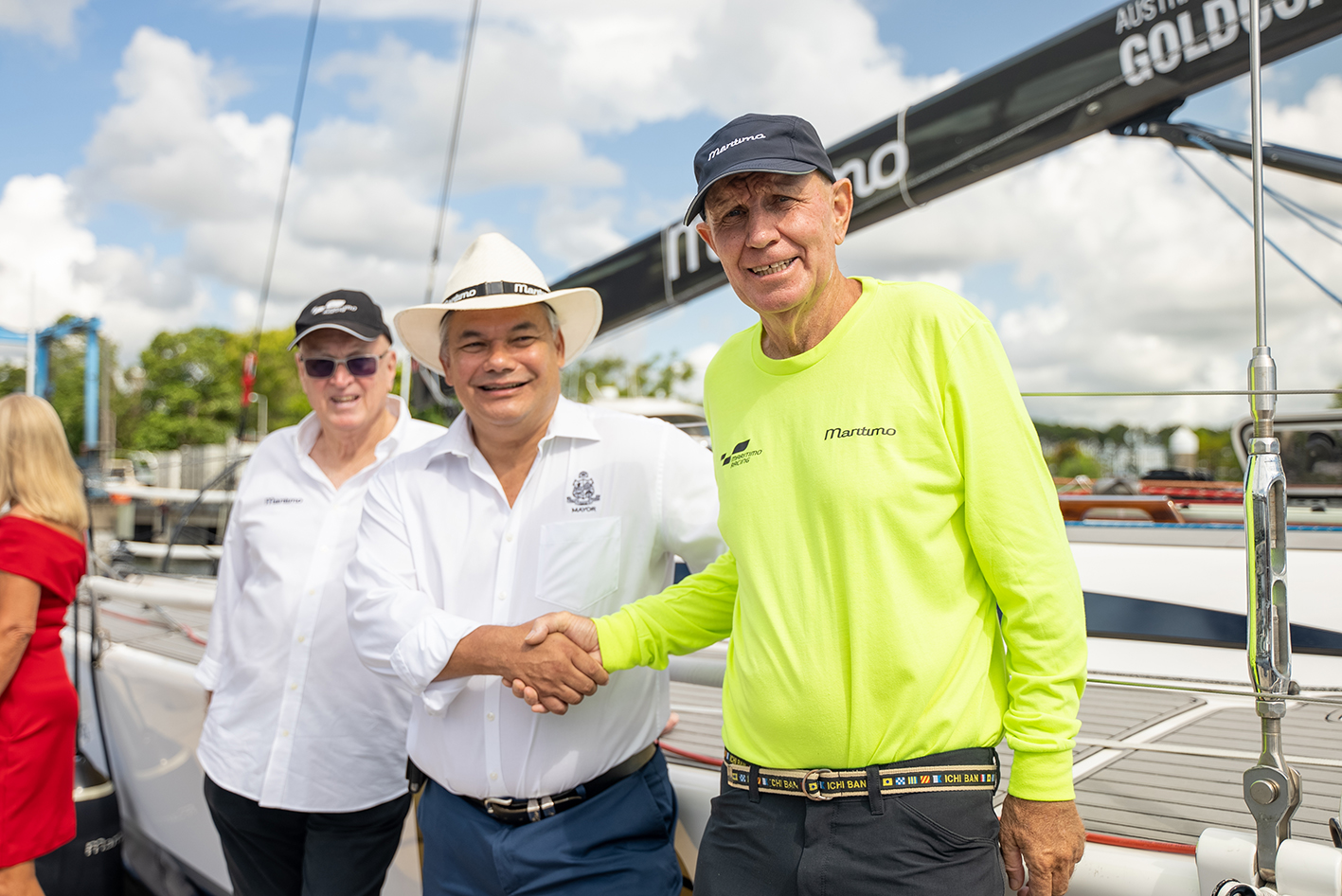 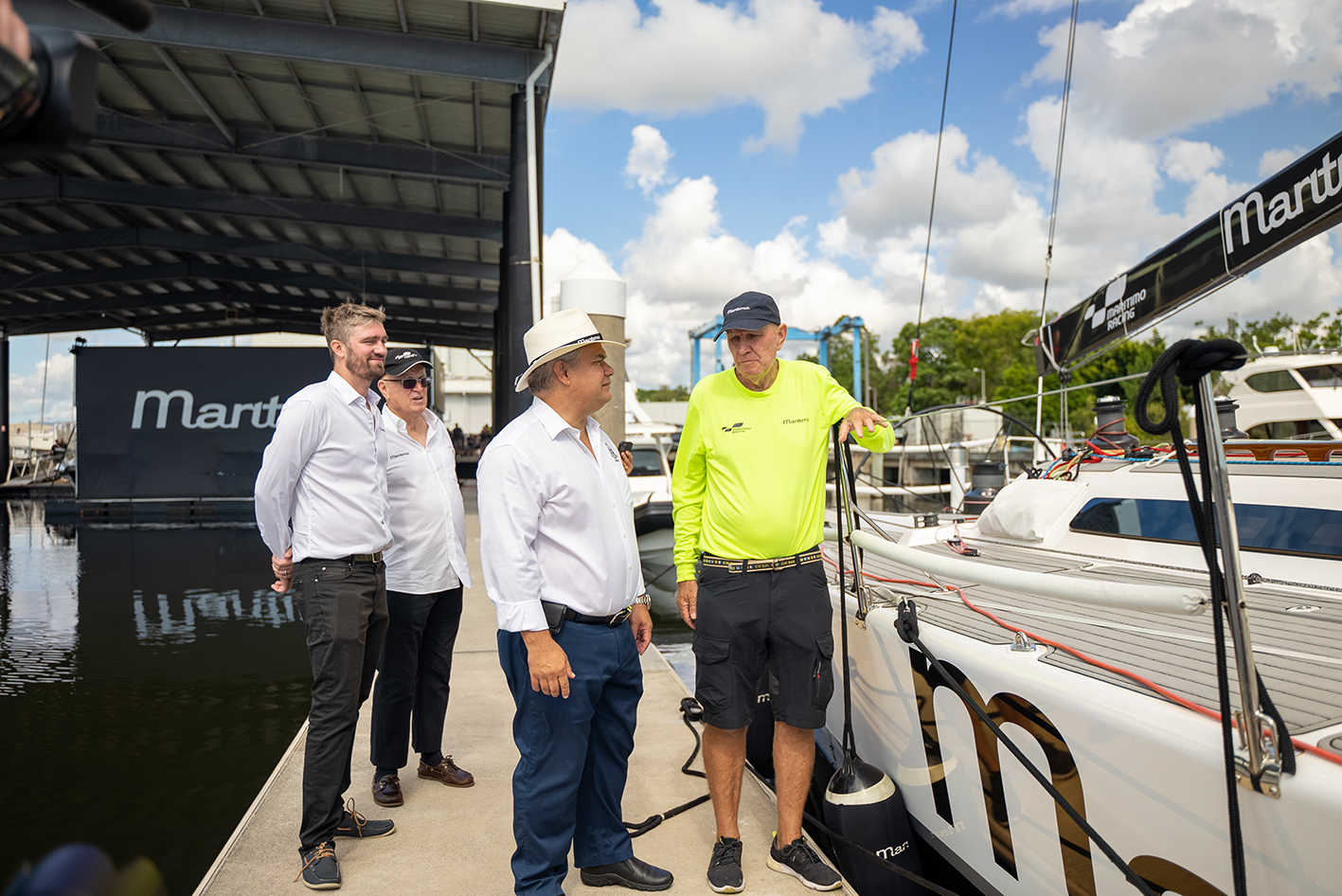 In 2019 they successfully campaigned in the 117-year-old ketch Katwinchar, a former Barry-Cotter family boat, that was found derelict in Hexham NSW and totally rebuilt by Maritimo craftspeople before being entered in the Vererans’ Division, which it won in that race.

Racing Katwinchar ignited an old passion in the Barry-Cotter brothers and they sent off sailing team captain, Michael Spies to “find the right boat for the Rolex Sydney Hobart Yacht Race.”

Calling on old contacts and decades of experience in international yachting circles, which includes 43 Sydney Hobart campaigns, Spies searched the globe for the perfect yacht for Maritimo’s next Hobart challenge.

The ideal fit for Maritimo was discovered in San Francisco. The 54-foot Westerly marine-built yacht, named Swiftsure 2, was found and met all of Maritimo’s criteria, to bring back to Maritimo’s Special Projects division at Maritimo’s state-of-the-art facilities.

The vessel was owned by the Cal Maritime College having been donated by the family of the late USA sailing great Sy Kleinman, who raced the vessel with considerable success to an age of 96 in 2017.

Swiftsure 2 was designed by Carl Schumacher and under Kleinman’s watch it had won numerous races including five Rolex Big Boat Series races out of San Francisco.

“It won virtually everything going and has an enviable following among yachting circles in the US,” said Spies.

Spies said the original plan was to ready the yacht in the USA for a race to Tahiti, but then Covid-19 hit and complicated plans.

“We instead prepared the yacht to ship back to Australia, instead of sail, and against the odds we managed to get it to the Koheler Yard in San Diego just as the rest of the marine industry in the USA went into shut down,” said Spies.

“We managed to load the yacht on the ship before being locked down, and the yacht arrived at the Maritimo Special Projects Division on the Gold Coast in early June 2020.” 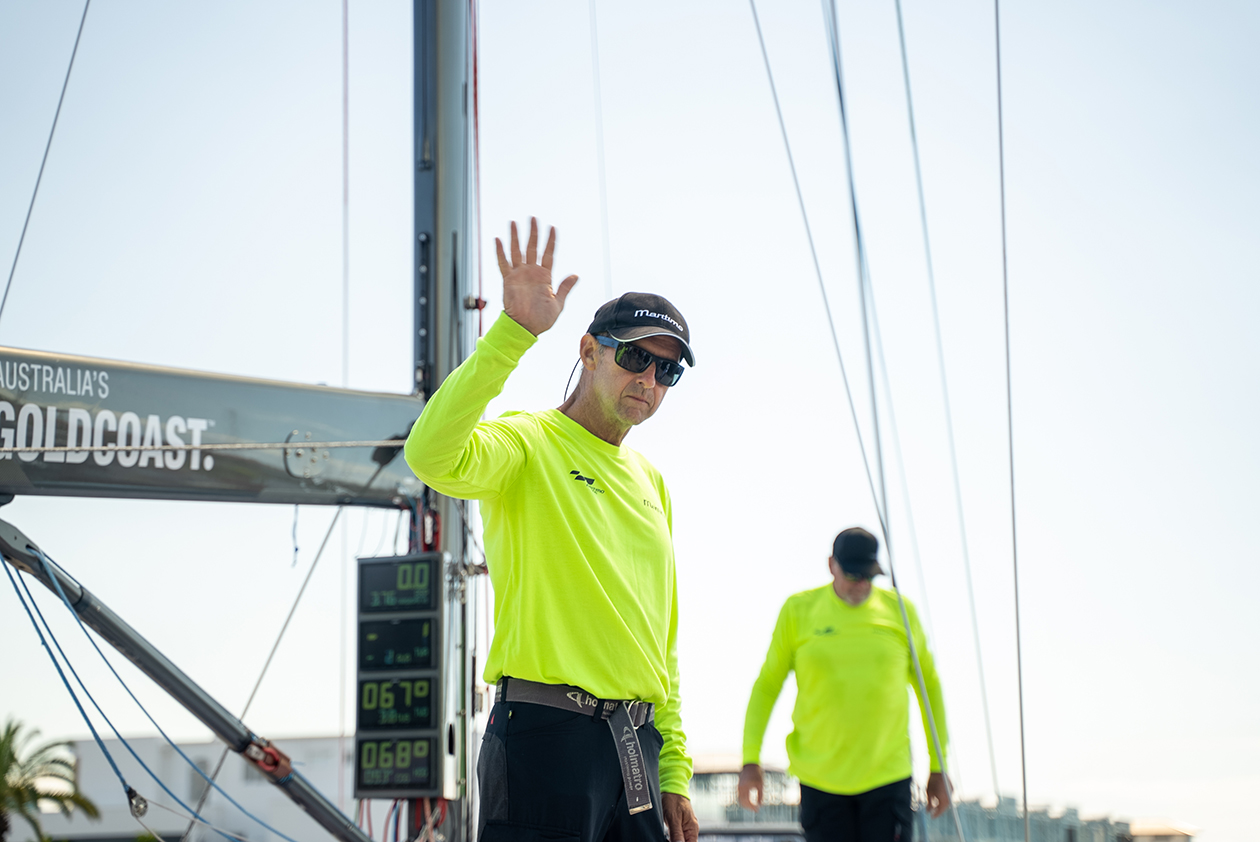 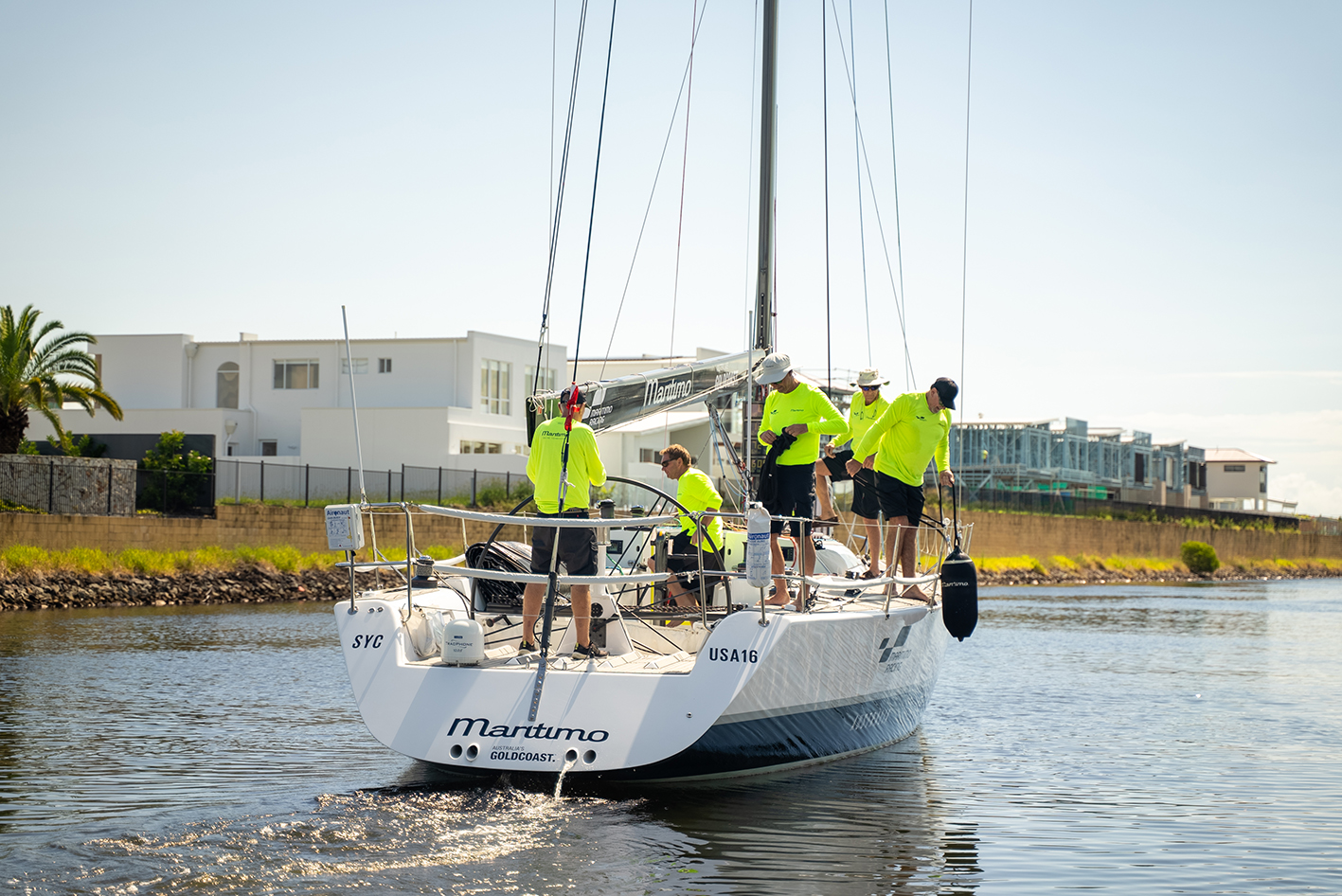 With the experience of the complex two-year restoration of the recent Katwinchar project to draw on a team of Maritimo’s craftspeople, set about transforming Swiftsure 2 into Maritimo 11 in readiness of the 2020 Rolex Sydney Hobart which was subsequently cancelled because of COVID-19.  This included installing a new carbon fibre mast and boom.

“The whole re-built project was undertaken by Maritimo craftspeople and apprentices, which adds so much benefit to the quality of Maritimo’s motor yachts, as their craftspeople develop such diverse skill sets and knowledge gaining experience in projects like these,” said Spies.

For Spies, this year’s event will be especially satisfying for him. He has previously won handicap and line honours titles, is a former race record holder and has won five world championships.

He has skippered Maritimo 11 to Line Honours Victory in this year’s Brisbane-Gladstone Race and completely dominated the South-East Queensland Offshore Racing series leading up to this year’s departure.

Joining Spies in this year’s RSHYR will be some of the world’s best and awarded sailors.

Navigator Murray Spence, internationally famous, first sailed in the event with his father in 1975 He has since progressed through the ranks and was Sail Master aboard Alfa Romeo during its global maxi boat dominance.

Scott Kaufman, originally from Sydney, took up a position with design house Sparkman and Stephen’s and moved to New York where he has been based for 40 years. He started his own design studio and his designs won numerous major regattas. He represented Australia in the 1968 Olympics in Mexico and recently won the North American Etchells Championship.

Sailmaker Steve Jackson is the proprietor of Sails Inc on the Gold Coast and he builds all the sails for Maritimo 11. Boat captain Tony Arends has been part of numerous Americas Cup campaigns and spent 35 years living in the USA. His vast array of skills is invaluable to Maritimo’s reliability and success.

Watch Captain Neil Sherring is synonymous with yachting in Australia. He has enjoyed access in a range of different classes. Maritimo 11 will also represent the City of the Gold Coast by flying an ‘Australia’s Gold Coast’ spinnaker.

“We hope to make the city of the Gold Coast very proud of Maritimo 11,” said Spies.