Hall of Fame for GCCM

It is the first time any facility has achieved this accolade under the Boatyard category as the Hall of Fame was specifically created to recognise marinas that have consecutively won a major Australian Marina of the Year category – a track record only achieved by the Coomera-based service facility.

Trenton Gay, CEO of Gold Coast City Marina and Shipyard said “We are delighted and humbled to be recognised. This award acknowledges all the hard work and dedication of not only the whole GCCM team but also our tenants.

“We are grateful for the support we receive from our customers and, of course, the MIA. In the end, it’s all about the customer, listening to what they want and striving to exceed their expectations through a process of continuing improvement. This award further motivates us to stay on the top of our game.” 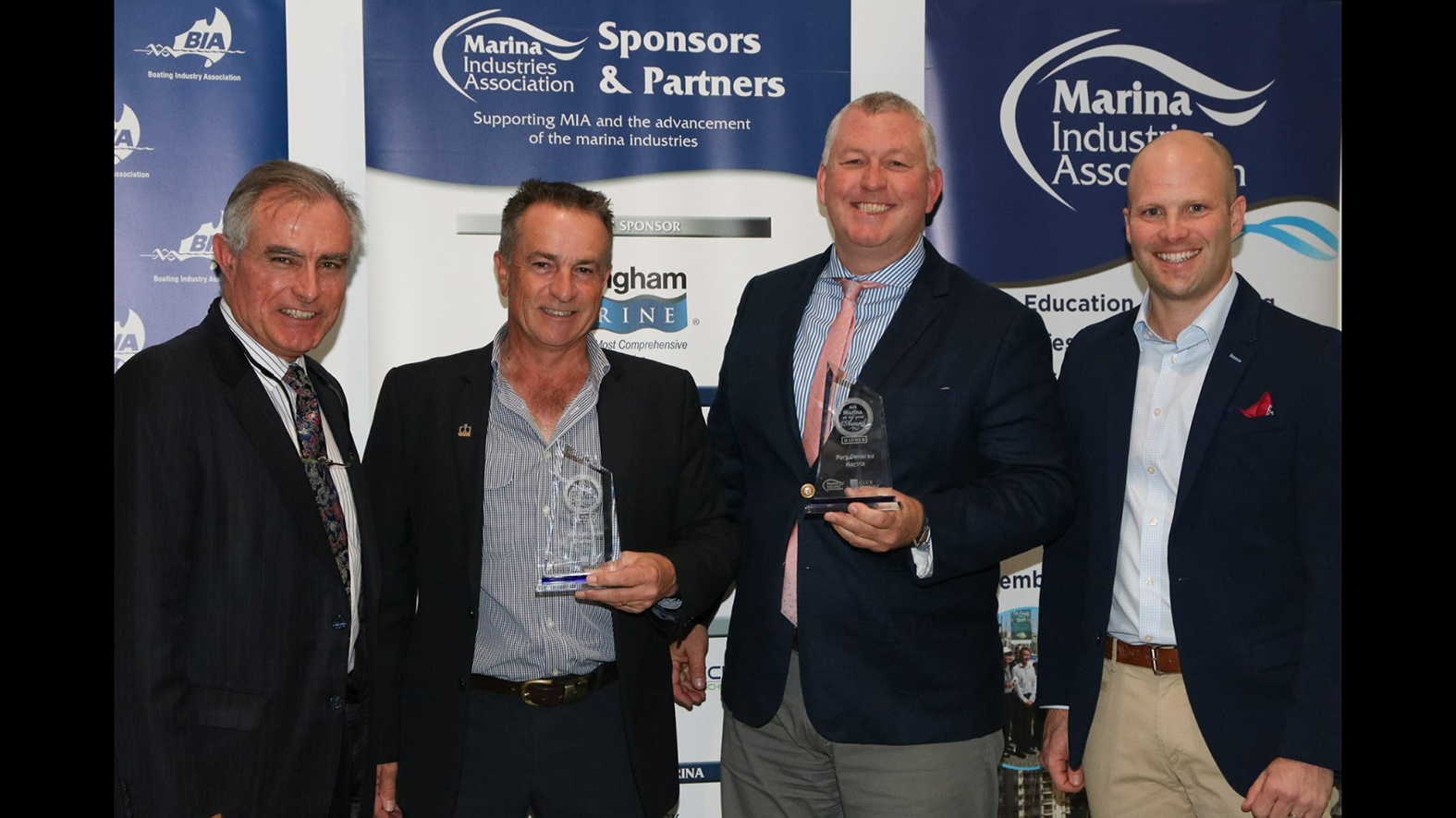 Andrew Chapman CMM, President of the MIA said, “The MIA strives to support and encourage marinas to deliver exceptional facilities and service through our education and awards programs for the benefit of the boating public and the broader community.

“Gold Coast City Marina and Shipyard has consistently demonstrated this commitment to excellence and it is fitting it is the first facility to be inducted into the Hall of Fame for the boatyard category.

“We hope that this recognition motivates other boatyards to embark on a similar journey.”

The presentation was a highlight of the Gala Dinner and Club Marine Marina Awards Presentations at the Marine 17 International Conference and Exhibition in Sydney. Yet, it was not the only award presented to GCCM on the night.

The recognition did not stop with the Hall of Fame and its CEO.

GCCM was also bestowed the award for the Best Environmental Initiative by a Marina for its continued environmental improvement which has set a global benchmark: Initiatives which include water recycling, treatment and rainwater capture; on-site recycling of hard and liquid waste; and perhaps most impressively, the largest marine solar power in the world – only further demonstrated by the facilities recent 100 percent score on its Clean Marina audit.

Finally, GCCM employee and long-standing figure of the Australian marine industry, Steve Sammes, was nominated as the Marina Employee of the Year for his dedication to best practice marina management, outstanding customer service and leadership in the industry.

“Our onsite trades at GCCM are the best of the best and they all like working together, that is why we have become one of Australia’s premier refit and repair facilities, and have been recognised with so many industry awards,” said Mr Gay.

“Nothing is too hard – we’ve got the right team, the right culture and facilities and we are passionate about getting boats back on the water on time and on budget – and crews love spending time on the Gold Coast,” added Mr Gay.

GCCM is no stranger to industry recognition and award ceremonies as in its 17 years of operations it has, in total, won the following honours to name a few:

MIA Outstanding Contribution by an Individual to the Industry, Trenton Gay, 2016/2017

The facility is also accredited as a Level 3 International Clean Marina and Fish Friendly Marina.

The Gold Coasty City Marina and Shipyard is a trail blazer. Developed as a marine services cluster, there are over 65 marine related trades on-site making it the largest and most comprehensive marine service facility in the Southern Hemisphere.

To meet market demand and trends, GCCM continues to invest in upgrading its infrastructure and services, most recently investing in a 250-tonne Italian-built Ascom straddle lift.

Other additions to the yard include 45-tonne hydraulic trailer, courtesy vehicles, solar power facilities, new superyacht work berths for vessels up to 65 metres with 400-amp power and vehicle access.

Future developments will see a Stage 2 expansion to an adjacent 20-hectare site.

The business of leisure

The business of leisure