The Ferretti Group is exhibiting at the Cannes Yachting Festival in grand style with an extraordinary fleet of 23 magnificent yachts.

The Ferretti line-up includes five new entries from its Riva, Pershing, Ferretti Yachts and Wally brands. In the enchanting setting of the Côte d’Azur, five fantastic boats make their world debut, representing an unrivalled synthesis of style and design, comfort and livability, technological innovation and performance.

They are Riva 68′ Diable, Riva 76-foot Perseo Super, Pershing 6X and Wally WHY200, joined by the majestic Ferretti Yachts 1000, the largest model ever built by the Cattolica-based Shipyard.

Great interest for the presentation of the progress of the Full Custom 101 Wally, produced in Forlì, whose launch is planned for next year, for the long-awaited launch of the new sailing fleet, consisting of three models 110, 130 and 150 semi-custom, and for the new 58wallypower, one of the six new projects signed Ferretti Group alongside Riva 102’, Riva 130’, Custom Line 140’, Ferretti Yachts 780 and Pershing TØ.

The 43rd edition of this key European show for industry players and journalists got underway again this year with the Group’s annual press conference, during which Ferretti Group CEO Alberto Galassi described the main economic results in the first half of 2021. 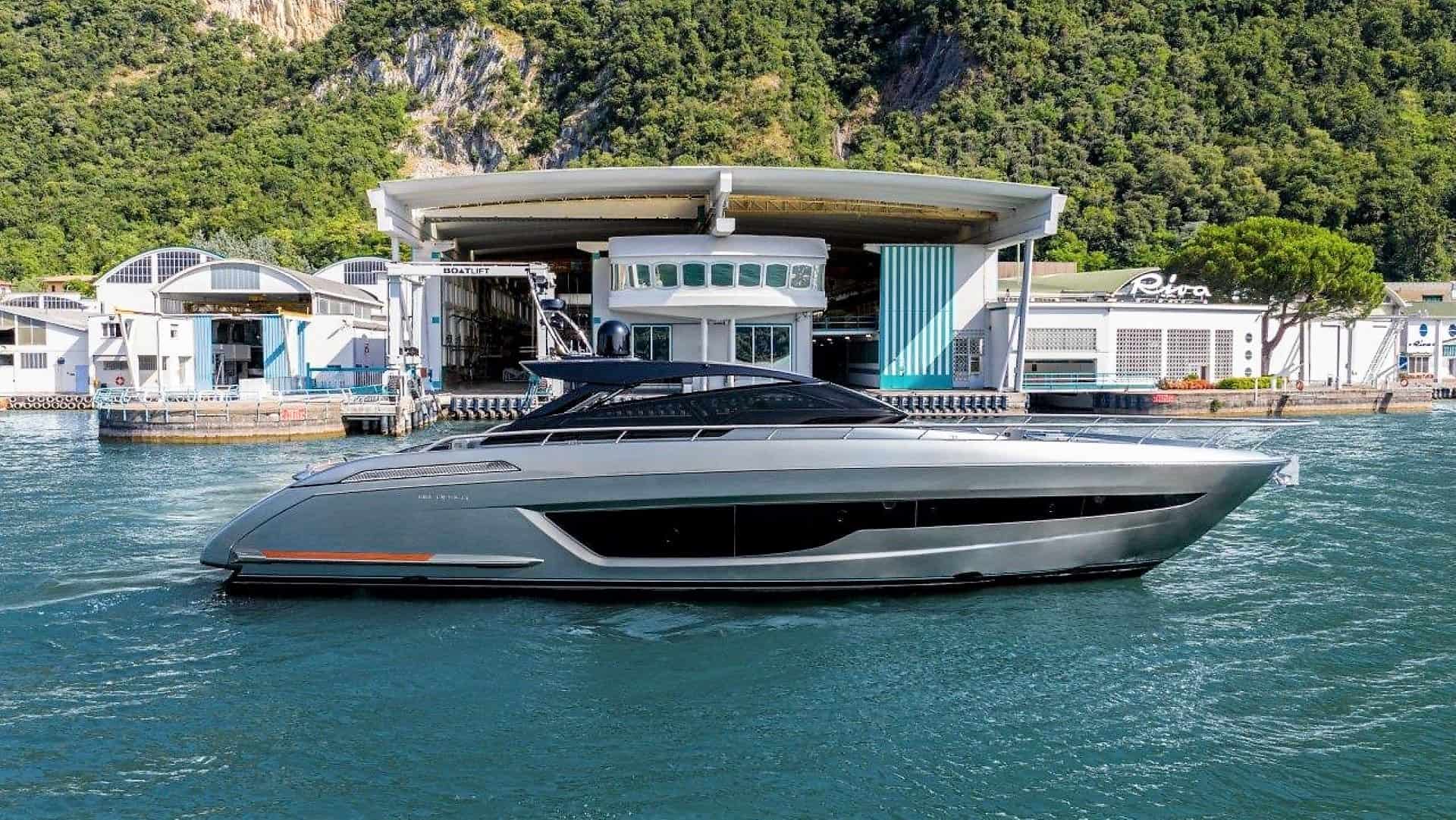 Riva 68 Diable to be unveiled in Cannes. 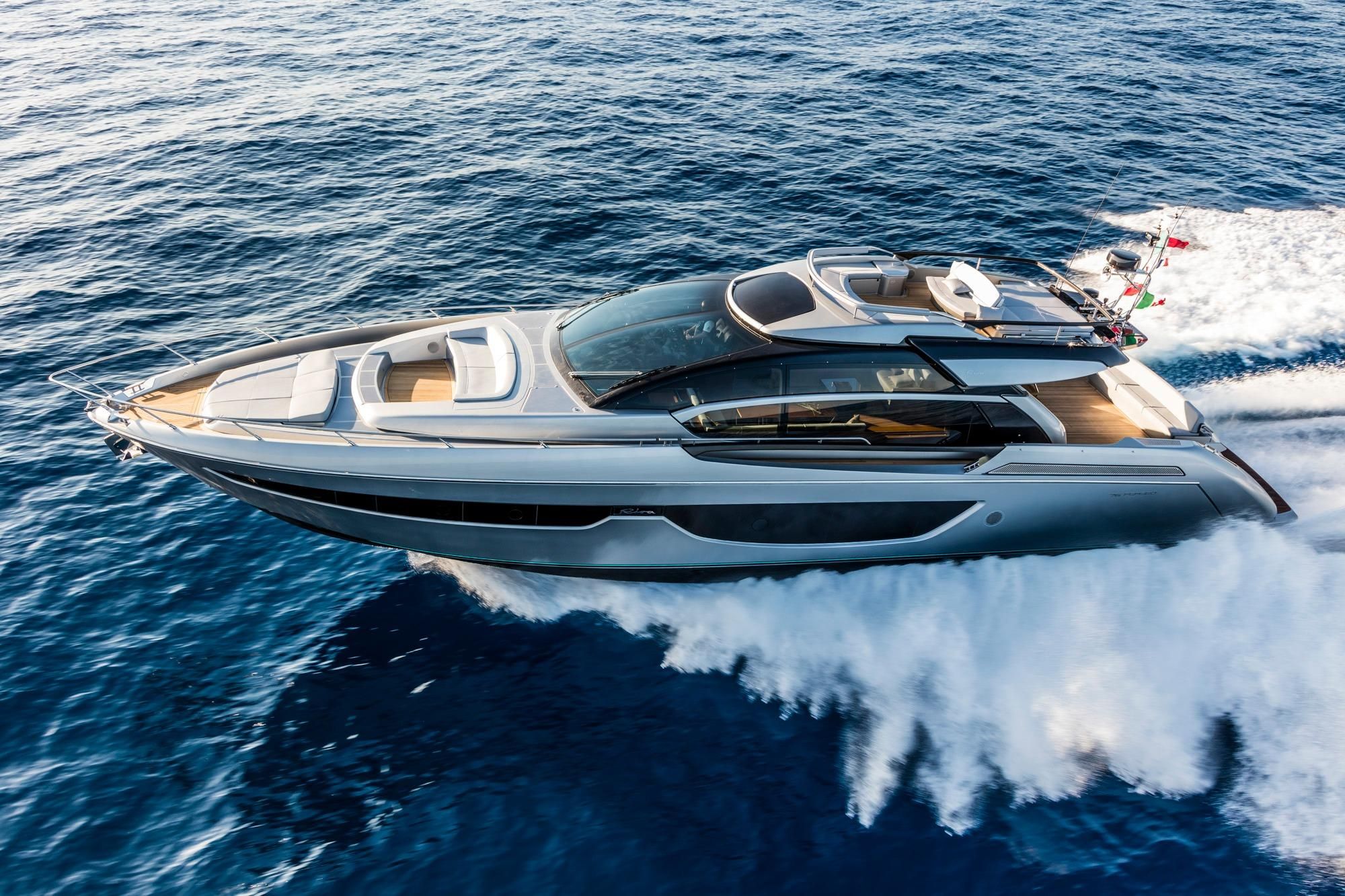 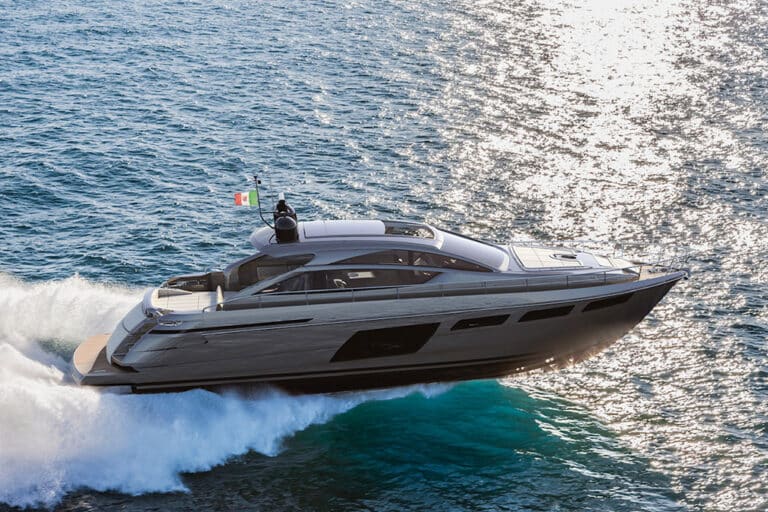 The Pershing 6X packs all the best of the brand’s leading-edge technology into a compact form with a top speed of 48 knots.

The group continues to pursue the investment plan that is a core asset in its strategic roadmap. In the three-year period 2018–2020 alone, over €200 million was invested in product development and industrial capacity, enabling the group to make rapid progress on range renewal, with the launch of 23 new models.

“In sport this is the year of Italy and in sailing the champion is Ferretti Group, which is impressing everyone with amazing boats and record numbers,” said Ferretti Group CEO Alberto Galassi.

“There really is no better time to return to Cannes with in-person attendance and a super fleet of 23 yachts and five world premieres that tell the story better than any words of our determination to create beauty and performance.

“Even the mathematics are on our side: the resounding figures for the first six months describe strong growth that rewards an industrial strategy geared to constant innovation.

“Suffice to say that in the three-year period 2019–2021 alone, we presented 23 new series and semi-custom models, and will launch just as many in the next three years, renewing the range of all our brands. We’re in for a resounding end of the year!” 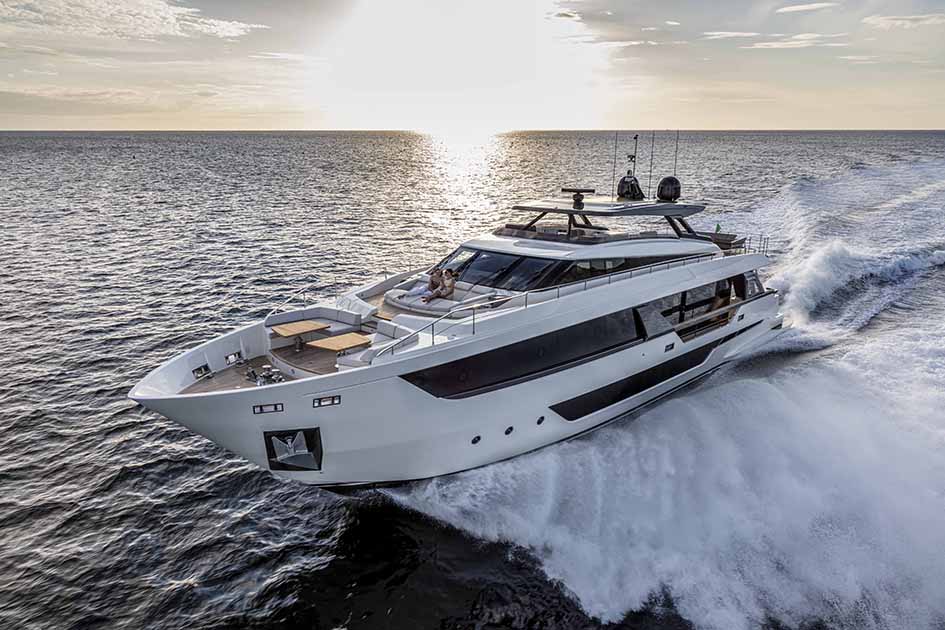 The new Ferretti Yachts flagship is the largest boat ever produced by the shipyard. 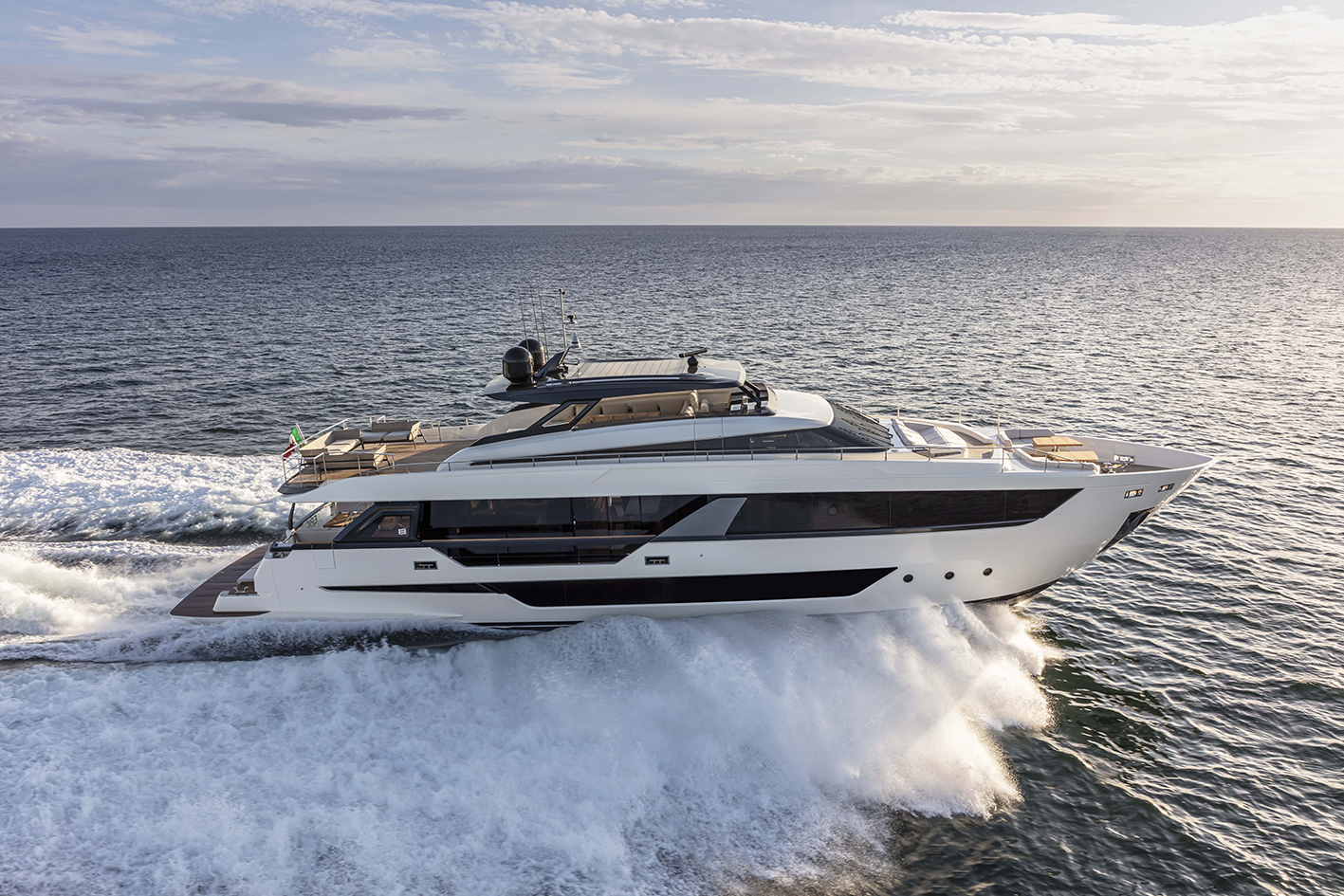 An open yacht with a high concentration of sportiness, innovation and liveability, the Riva 68’ Diable incorporates inspiring technological and design innovations, accompanied by the cultured taste for tradition and fine detailing that is the brand’s stylistic hallmark today.

One of the main new features and strengths is the new hardtop, with a clean, linear design in which the technical and technological components are hidden from sight, protecting and sheltering the central part of the yacht and the helm station on the main deck.

The result of collaboration between the Product Strategy Committee, Officina Italiana Design and the Ferretti Group Engineering Department, the new Riva sport-fly exceeds every expectation in terms of design, aesthetics, functionality, onboard livability and performance.

Over 40 square metres of glazed surfaces on the hull and in the superstructure characterise the yacht’s sleek profile and enhance the sporty look of the exterior styling. The mahogany and polished stainless-steel detailing, which has both technical and design functions, pays stylistic tribute to the authentic Riva tradition.

One of the main functional design features is the glass roof with an opening forward section positioned over the lounge, letting both light and fresh air into the space below.

The new entry in the Generation X range expresses the brand’s boldest and most daring side. Born from collaboration between the Ferretti Group Product Strategy Committee, the design firm headed by Fulvio De Simoni, and the Group’s Engineering Department, Pershing 6X turns heads with its highly aerodynamic profile and large glazed surfaces in the hull that flood the lower deck with natural light.

At 18.94 metres (about 62 feet) in length and 4.80 metres (about 16 feet) wide, this yacht packs all the best of the brand’s leading-edge technology into a compact form factor and, with a top speed of 48 knots, promises to appeal to owners who love excitement on the water. 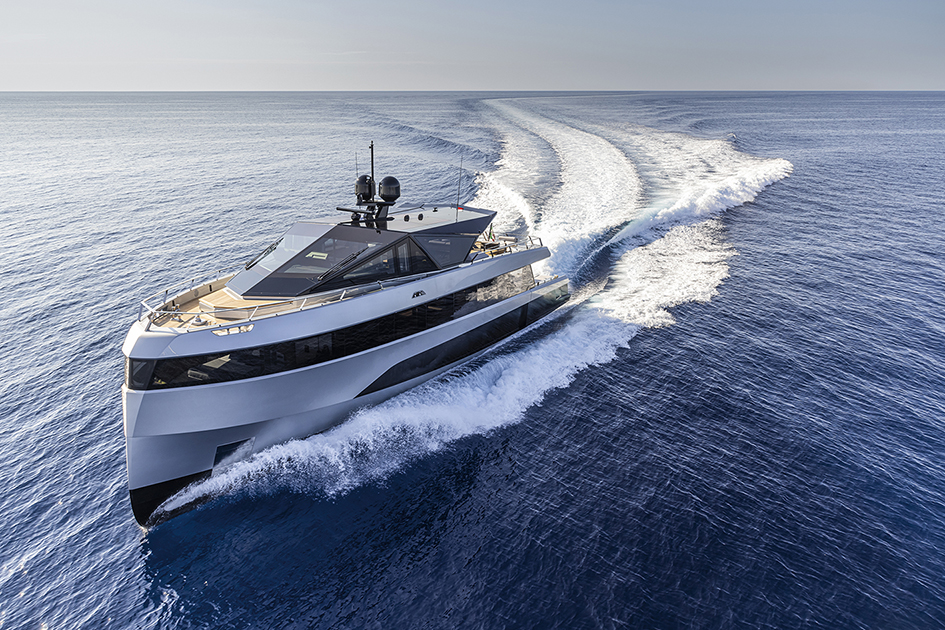 Wally WHY200 is the new compact superyacht capable of offering the comfort and space of a larger displacement yacht.

The new WHY200, the latest motor yacht developed by the Wally design team led by Luca Bassani and the Ferretti Group Engineering Department, with the collaboration of Laurent Gile NA for the naval architecture and A Vallicelli & C for the interior design, is a new compact superyacht capable of offering the comfort and space of a larger displacement yacht, combined with the speed and performance of a semi-displacement model.

WHY200 is the first Wally Hybrid Yacht, optimised for cruising in both displacement and semi-displacement modes and perfectly positioned midway between larger but slower yachts and fast planing models that inevitably offer less space. Thanks to the latest generation naval architecture and the propulsion system, WHY200 can cruise at a speed of 23 knots in hyper displacement mode.

The new Ferretti Yachts flagship is the largest boat ever produced by the shipyard. Built from composite materials, with parts in carbon fibre that underscore the hi-tech content, Ferretti Yachts 1000 reshapes space and changes the whole approach to life on board, with unprecedented design solutions and an interior mood either in Classic style, featuring muted, balanced tones and subtle contrasts, or a Contemporary option with fresher and bolder colour shades.

At the heart of the project is the idea of unparalleled comfort and wellbeing in both outdoor and indoor areas, where quintessential Made in Italy taste prevails.