Vanquish Superyachts in the Netherlands has received a new order for a new aluminium motor yacht.

The very first 35-metre VQ115 Veloce has been commissioned by and developed with a repeat client who loves entertaining large groups of people. The new tri-deck motor yacht is predicted to set a pace of 53 knots.

This launch model for the VQ115 Veloce line was developed to enable extended stays on board and a wide range of sports and entertainment facilities.

The initial discussions were based on design concepts for a VQ90 but quickly evolved as the owner added an extra cabin, a dedicated dining area on the lower deck and two garages.

The VQ115 will be powered by a trio of MTU-Rolls-Royce 2600s. Backed up by surface drives.

Studio Delta in the Netherlands is responsible for the naval architecture of the hull, working in tandem with Swedish company Petestep to optimise comfort and performance levels and increase efficiency by over 15 percent at top speeds.

Exterior designer Guido de Groot and his team have a relatively narrow hull on which to base their design. 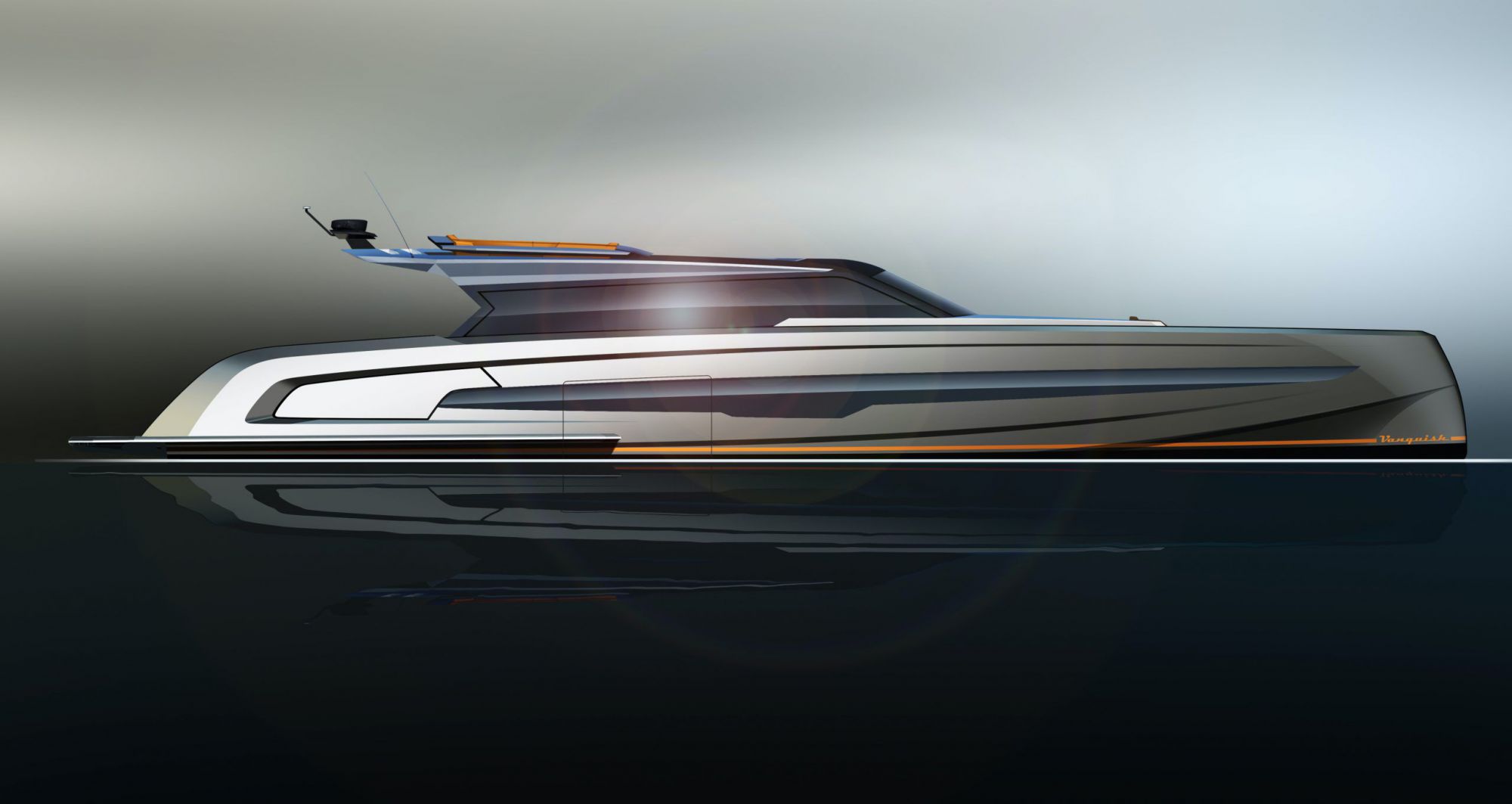 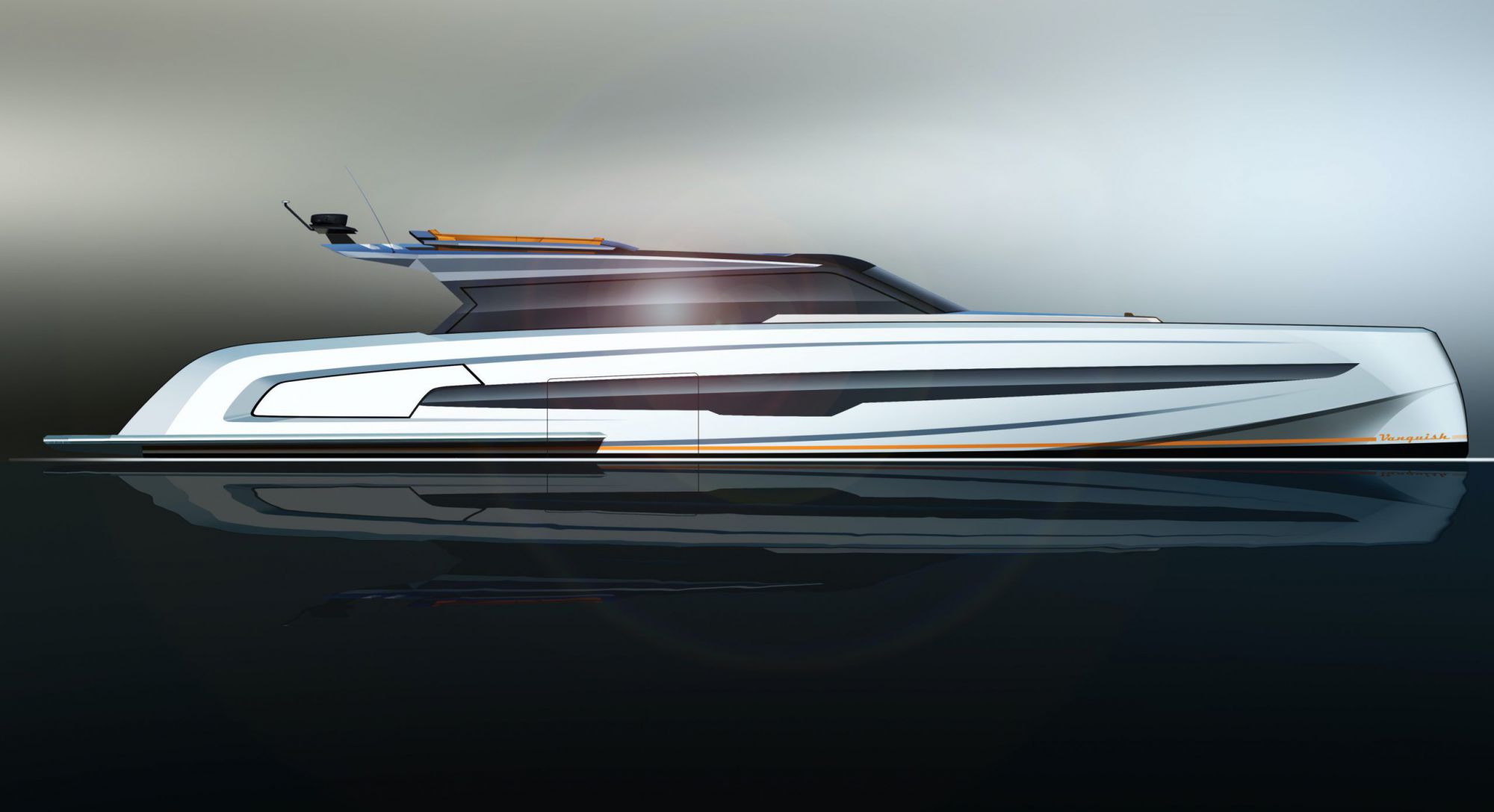 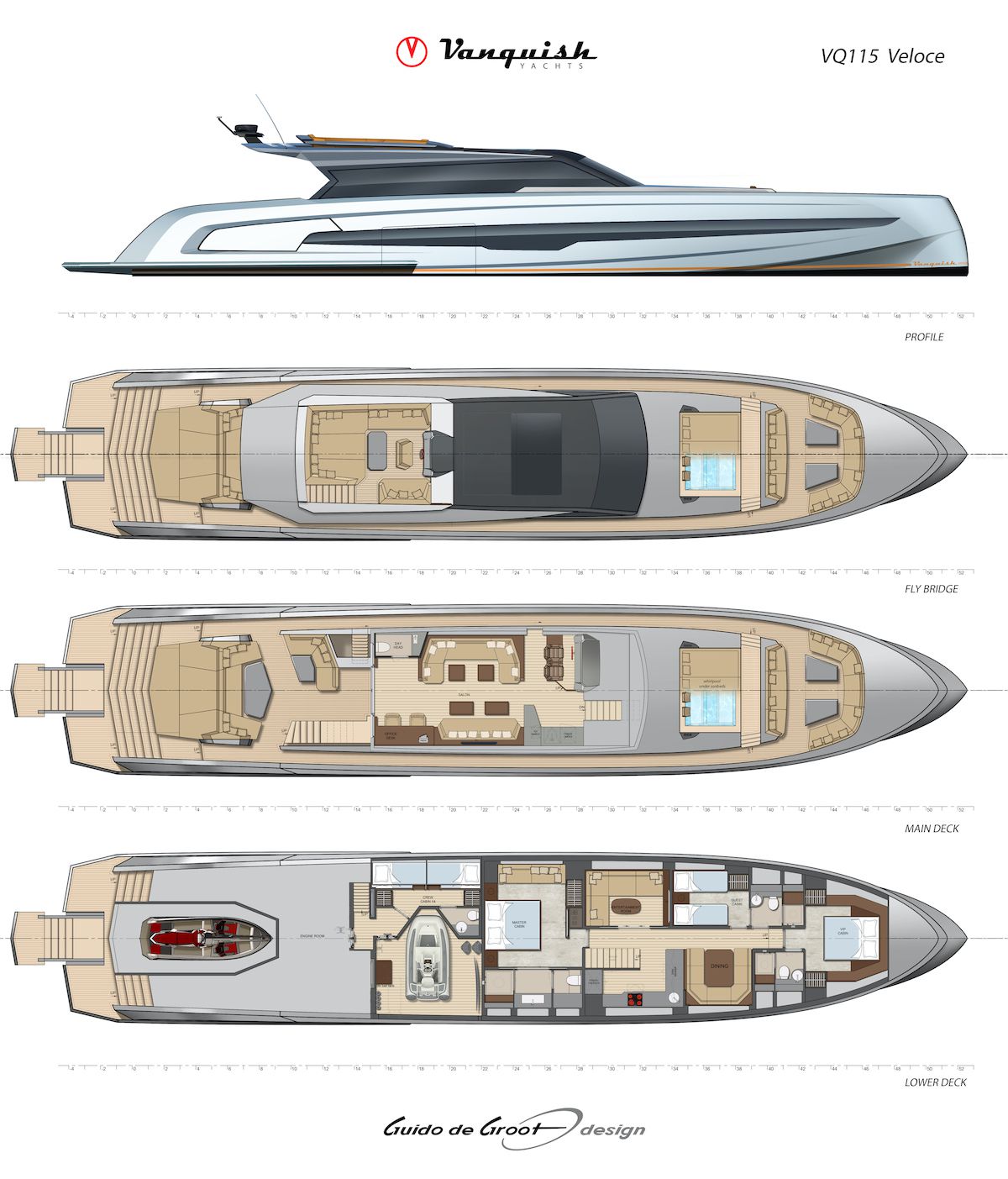 The engines will be placed in a trapezium shape with the middle engine forward. Two gyro stabilisers will ensure comfort at speeds. An impressive range of up to 600 nautical-miles will be possible when running on one or two engines, with an extra fuel tank available for cruising at lower speeds.

Space has been made aft for a large tender bay that will house a VQ16. This craft will be launched by a dedicated tender system, while a multifunctional hydraulic platform will ensure easy access to and from the water via a passerelle and swimming ladder. Another tender in the form of a VQ11 waterscooter will be housed in a second garage on the starboard side. This area will double as a leisure playground with a live bait tank, paddleboards, sea bobs and other toys. A hydraulic ladder will make diving a breeze.

The VQ115’s expansive foredeck has a large seating area for lounging and dining, plus the option to lift up the sun beds and create a saltwater jacuzzi.

There is a wealth of relaxation options on the aft deck too while the flybridge has a dedicated sunbathing area as well as its own helm station.

The flybridge has been superbly integrated within a distinctive exterior profile.

The interior features a futuristic style to match the exterior design, with a casual groove, emblematic Vanquish details and 45-degree treatments.

A smart layout makes optimum use of the enlarged space available. The main deck saloon will be fully tailored to the owner’s wishes with movable furniture to allow flexibility of occasion and time of day. Office space is included for when work calls, there is a neat pantry with its own cocktail bar, plus a day head to keep the lower deck private.

Stairs rise to the sport flybridge above while the aft door opens fully to create a unified space with the aft deck. Matching floors will ensure continuity between the outdoor and indoor spaces.

The lower deck features a more extensive galley and a U-shaped seating/dining area in a country kitchen style. Accommodations include a full-beam master suite, a VIP and a guest cabin, all with their own bathrooms. A dedicated media room includes a large television, a high-end sound system plus two Pullmans that bring the potential sleeping capacity to eight. There are also berths for four crew members.

The VQ115 is due to be delivered to the Mediterranean at the end of June 2022.

Two further models of this new line will go into production soon.