The new Azimut flagship is designed for the experienced owner and connoisseur who plans to enjoy long-distance voyages, whatever the weather conditions and in a constant dialogue with the sea.

The Magellano 30 Metri takes this desire for freedom and expresses it in the form of unprecedented seakeeping and a design that offers a view of both the sky and the sea from every point on the yacht. Sustainability-related choices aim to reduce the yacht’s environmental impact.

The Magellano Collection is the Azimut Yachts line for owners who seek extended on board experiences: Magellano is always smooth and safe at sea, with low fuel consumption and a wide range of speeds.

The interiors too are designed for long stays on board. The new flagship is the perfect fit for the brand’s crossover line, reprising features such as generous volumes and a desire to amaze in different sea conditions, without however compromising on elegance and attention to detail. 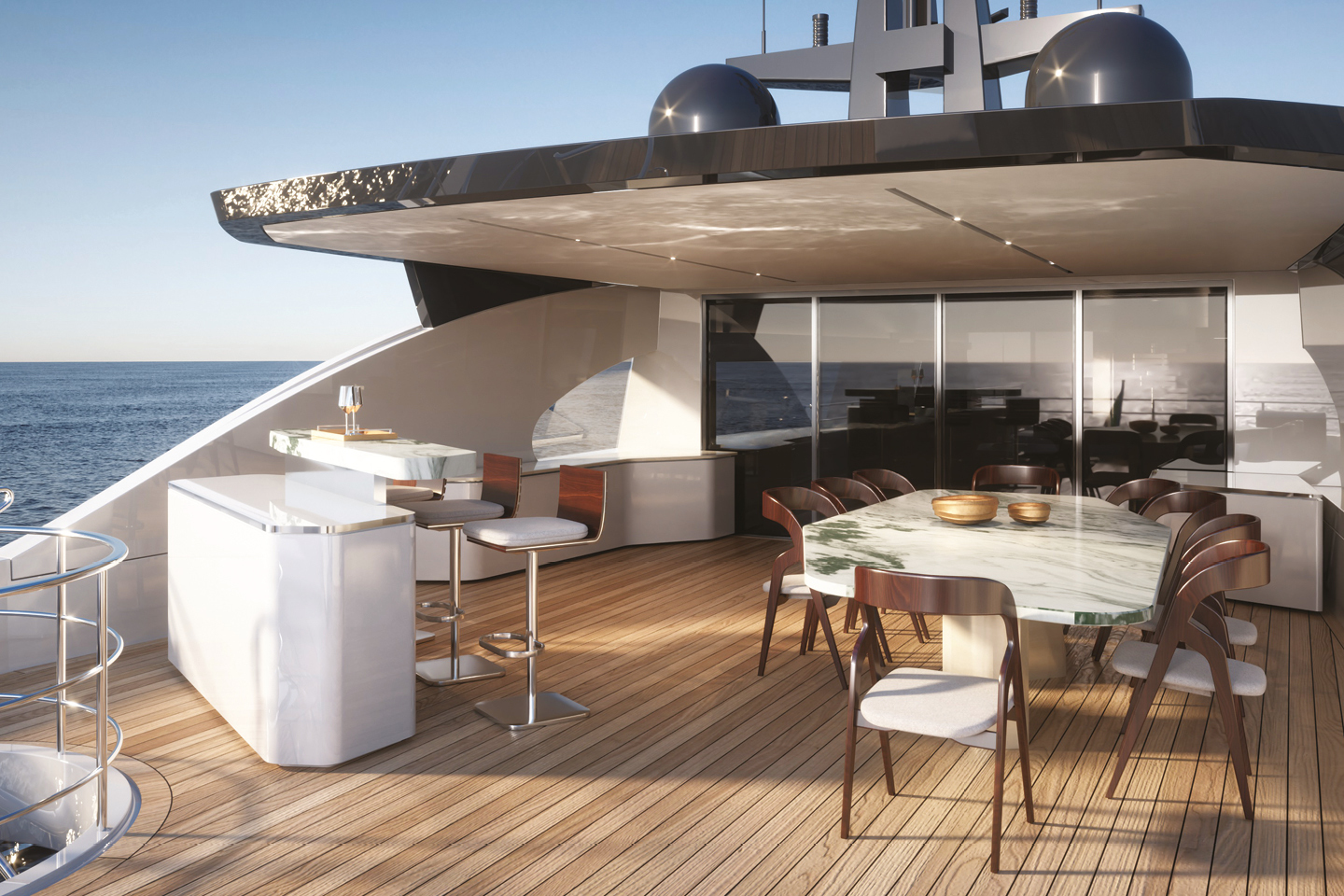 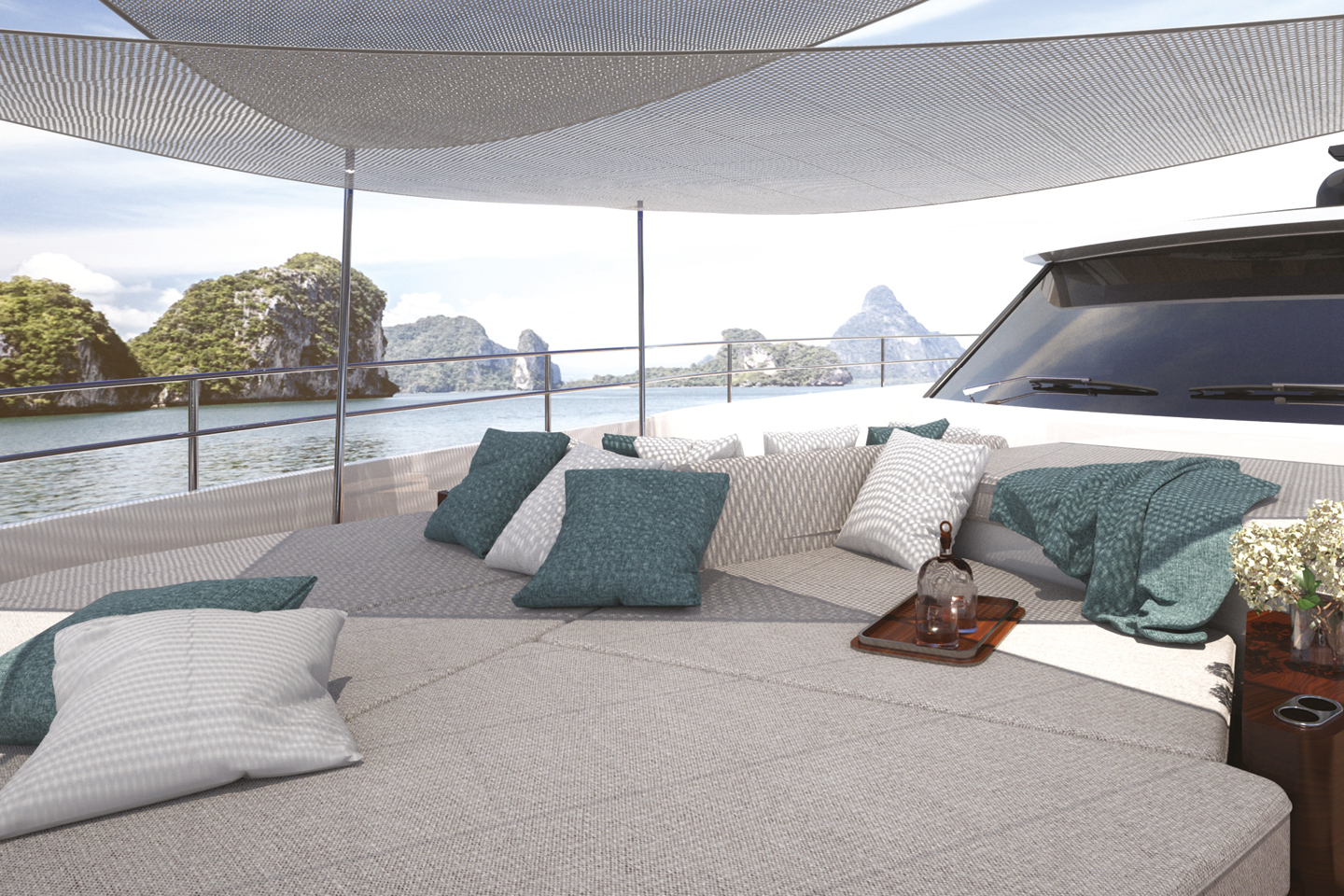 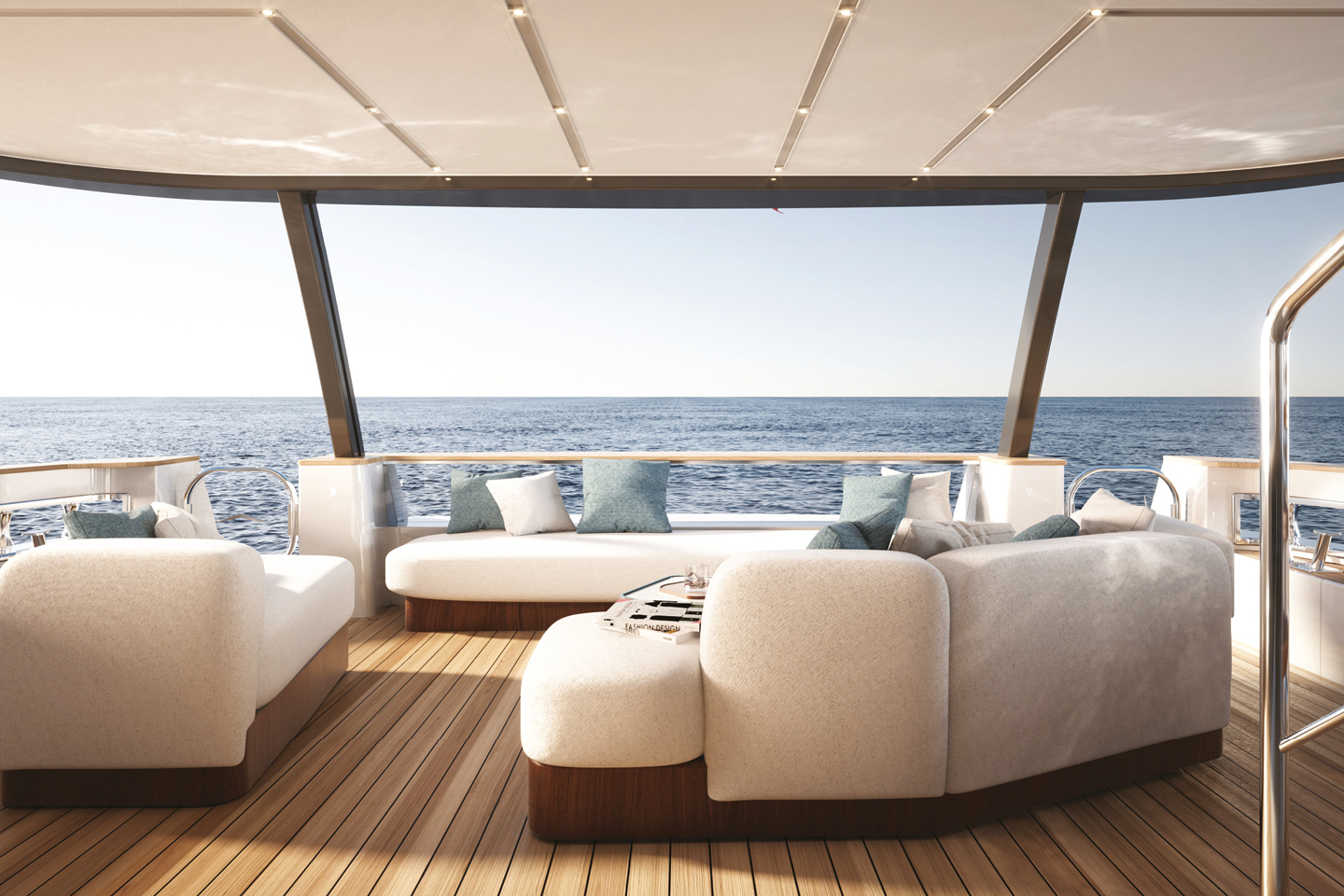 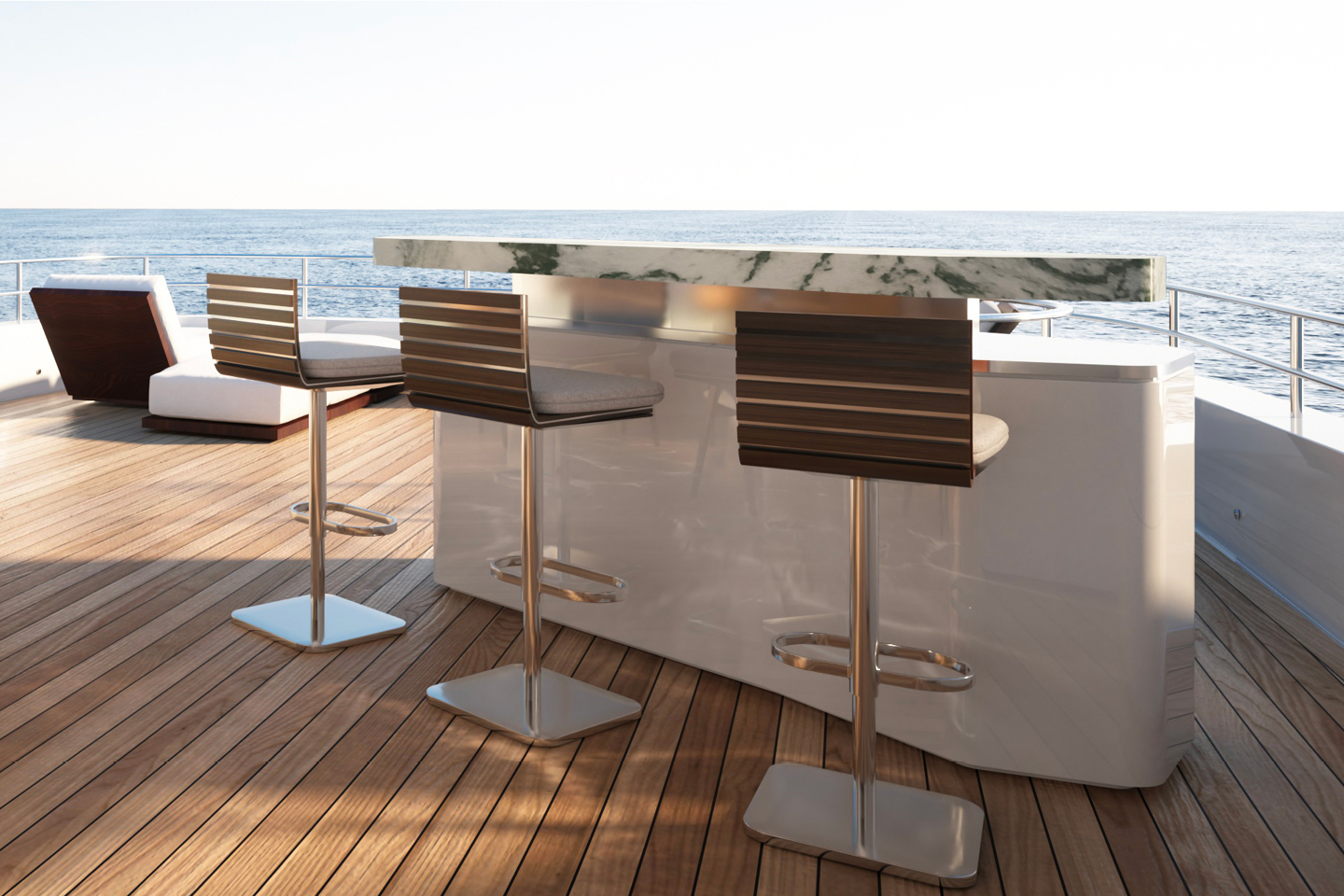 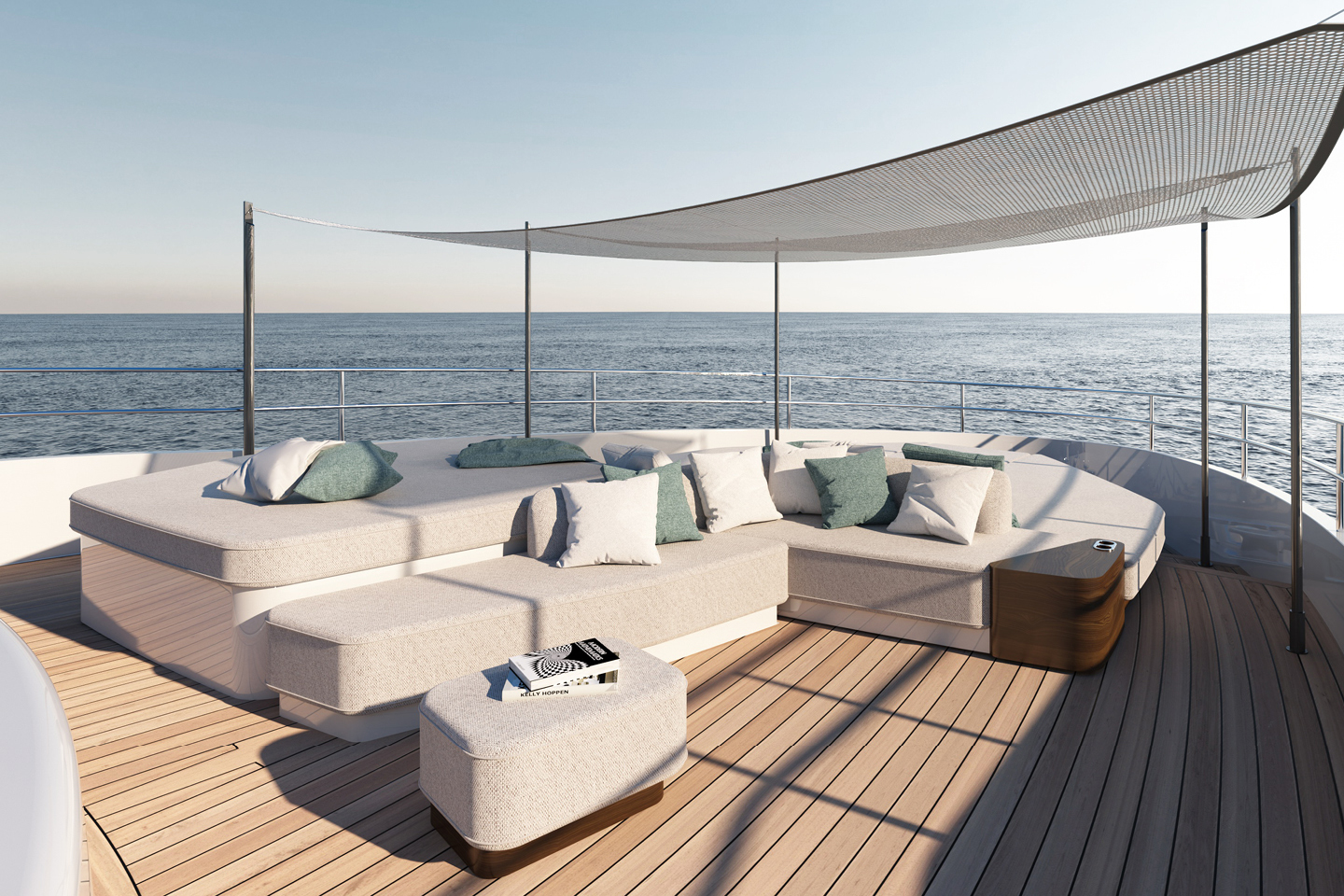 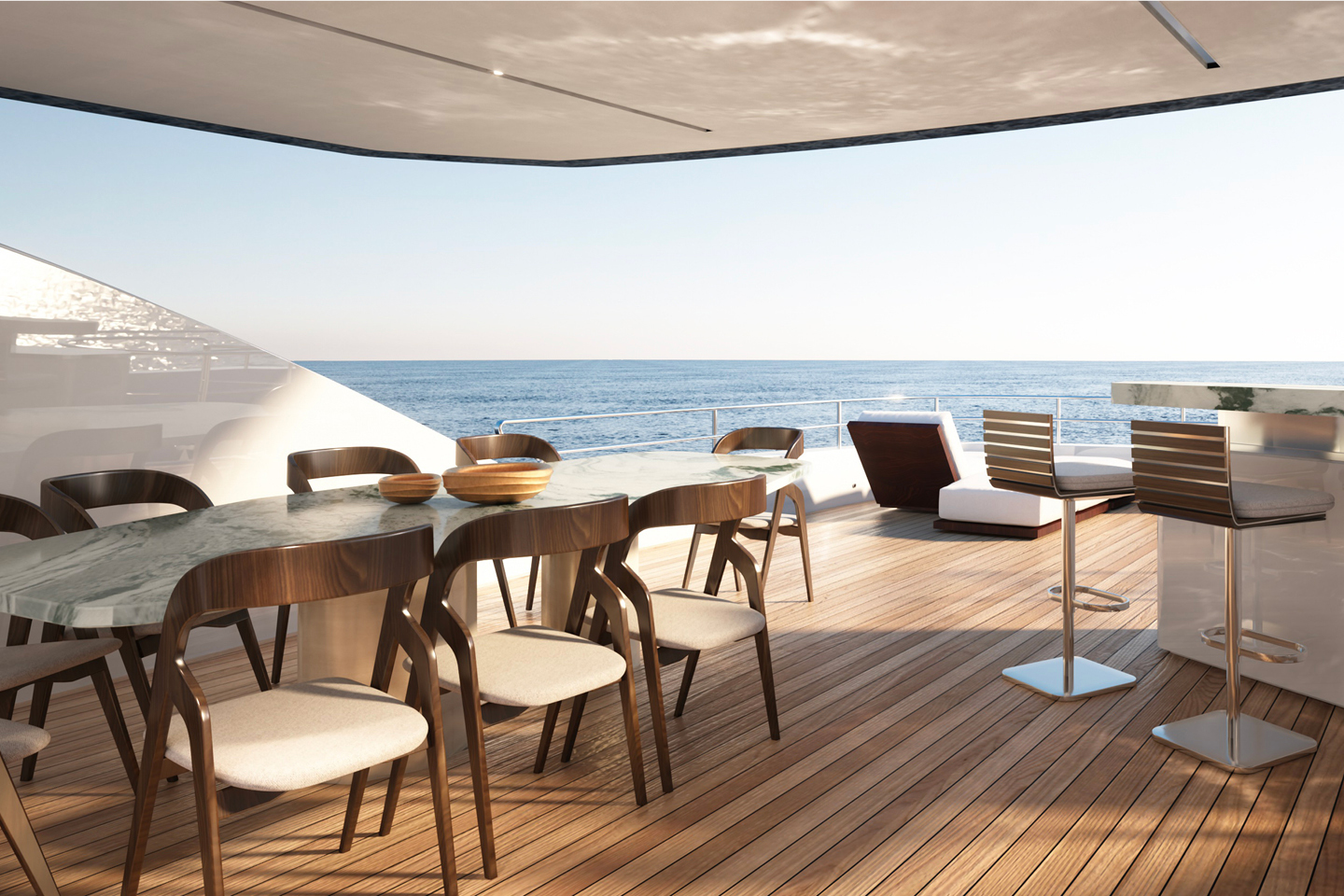 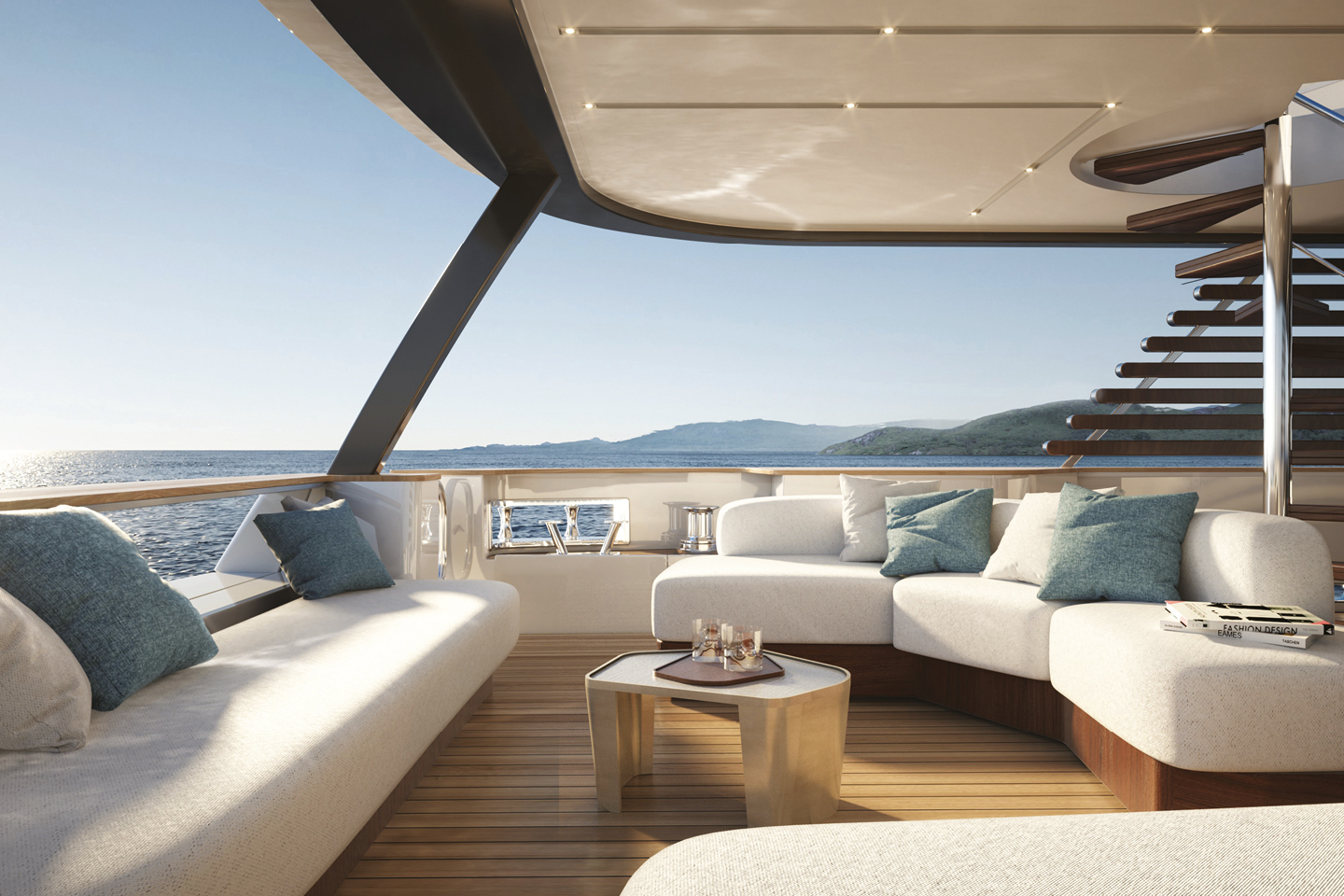 This result has been achieved thanks to the collaboration of the winning team that proved itself with the previous model (Magellano 25 Metri): Ken Freivokh, who handled the exterior styling and volumes, and Vincenzo De Cotiis, who designed the interiors.

Freivokh has created refined and modern but in no way aggressive lines that catch the eye of expert yachtsmen, also from the world of sailing yachts.

Unexpectedly striking, the teak louvres that close and complement the extensive glazed surfaces in the superstructure are a signature feature of the Magellano line. In keeping with its calling as a crossover, the new 30-metre yacht offers spacious, light-filled interiors that De Cotiis has successfully made intimate and inviting.

Freivokh and De Cotiis have designed the three decks of the new Magellano by breathing life into their shared vision of a yacht in seamless contact with the sea, from the Infinity Terrace that welcomes guests on board, to the generous terrace on the Upper Deck for socialising and enjoying the pleasure of cruising in the open air.

The huge windows – over 70 square metres of glazed surfaces – also ensure uninterrupted visual continuity between the interior spaces and the surrounding natural environment, which has a metaphorical presence in every setting on the yacht, from the full-beam Owner Suite and the living space on the Main Deck to the gracious Skylounge on the Upper Deck.

The innovative thrust of the Magellano 30 Metri is also expressed in the choices made to reduce environmental impact.

The second-generation Dual Mode hull, designed by naval architecture firm P.L.A.N.A. on a joint basis with the Azimut Yachts R&D centre, ensures an excellent level of stability, keeping fuel consumption down both at midrange speeds – even in rough seas, delivering on the promise of cruising in freedom in any conditions – as well as at higher speeds, reducing consumption in this case by about 15 percent compared with traditional hard chine planing hulls.

The new Magellano line flagship establishes a truly harmonious human relationship with the water, even and especially during periods spent at anchor: the Magellano 30 Metri is designed to be fitted with the Hotel Mode package, which includes 100kWh lithium batteries so that she can stay at anchor with zero emissions for up to four hours during the day and eight hours at night. The result is total silence broken only by the sound of the sea.